Do you enjoy chess? What if your chess pieces LITERALLY fought each other?

Chess was one of the very first games I played when I was young. To this day, I still love it quite a lot- though I play it substantially less. One of my earliest memories is getting on my father’s computer at 4 or so and playing online chess and checkers, and my affection for the game has persisted throughout the years. When video games opt to put a spin on a classic, I’m easily interested- and Pawnbarian’s version of chess is pretty damn fun. 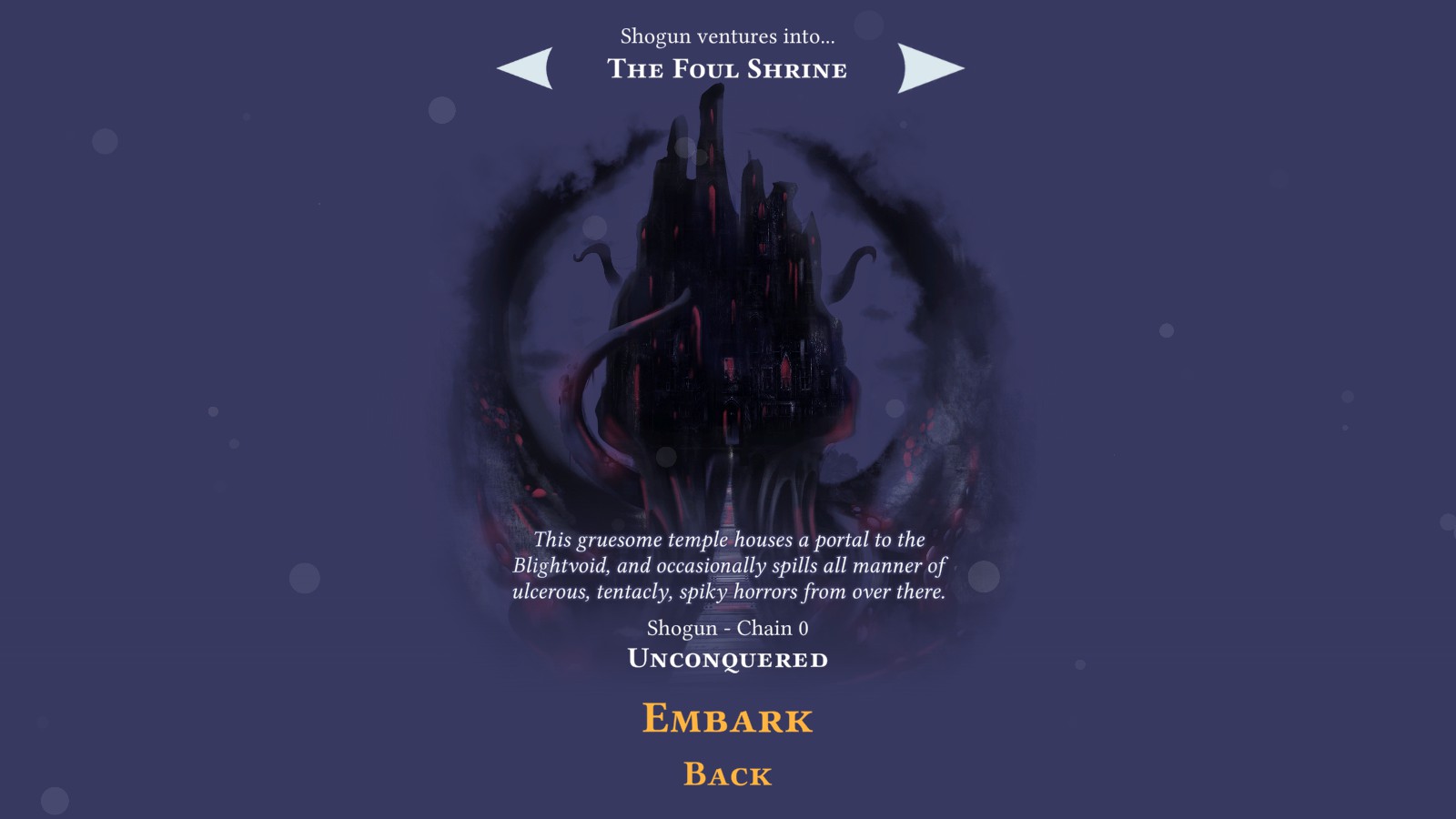 The story isn’t exactly the main focus of Pawnbarian. There are three character types to choose from, and each is attempting to reach the end of every dungeon available. The Pawnbarian, knight templar, and shogun. Each one plays differently, and has different buffs and effects that take place depending on the pieces that you play and actions that you take in a level. There isn’t a story regarding the characters per se. It doesn’t take a lot to imagine the pieces as characters trying to get free of each level, but it’s not a necessary component to the game itself.

Picking what level your piece ventures into gives the most world-building in the game. Each region is different, but the end-goal is the same: you’re fighting to escape. 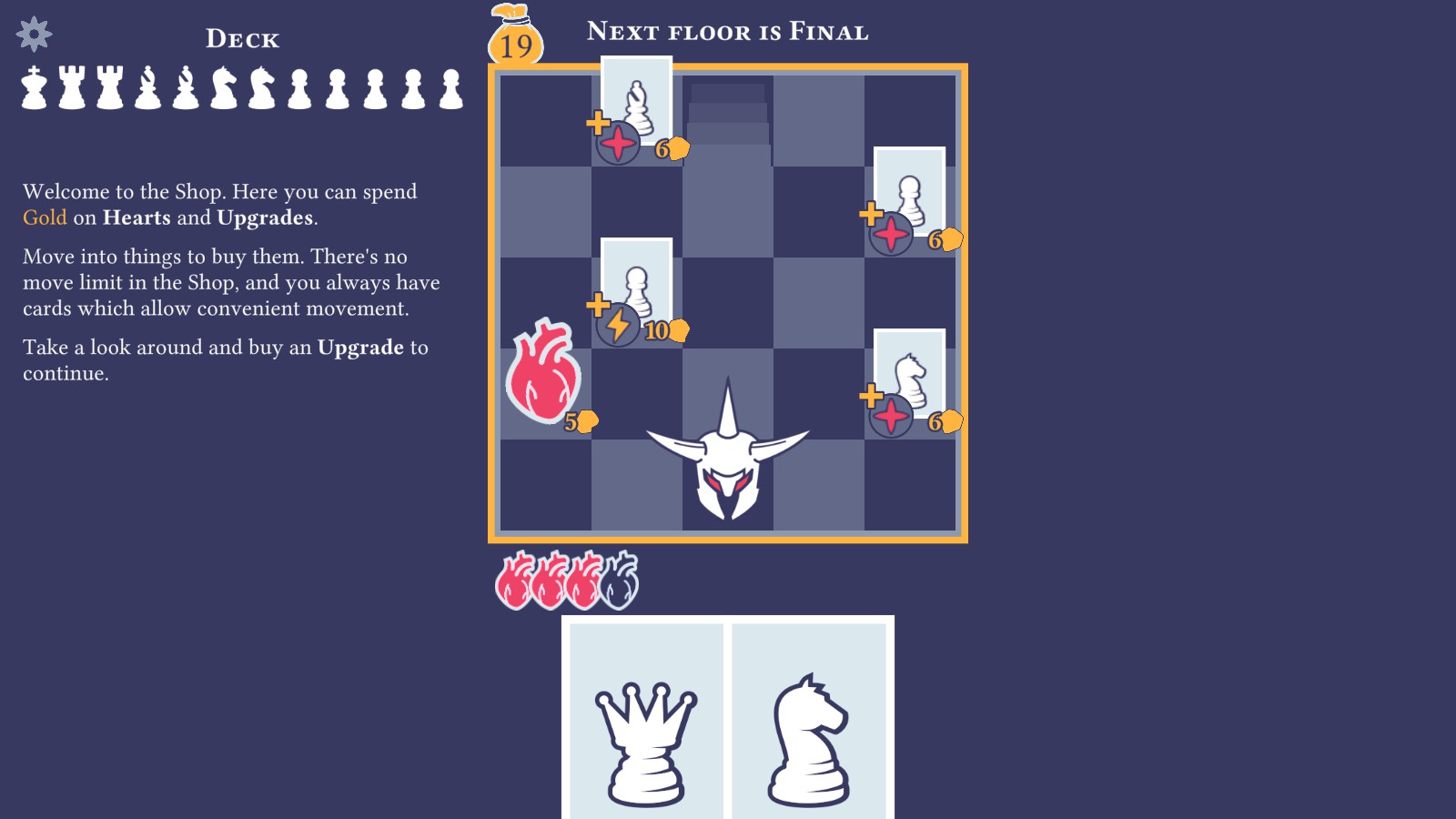 Visuals for the game are striking and high contrast. Backgrounds are always a blue, the chessboard squares are presented in a lighter blue, important enemies and borders are in gold, and pieces are in a contrasting blank white. Health and certain damaging buffs you can get onto your pieces are presented in red, and level visuals are often presented in black, but there are no other utilized shades besides this. The limited palette is lovely, and makes the game easy to stand at and think about for an extended period of time- as is necessary in chess.

While chess requires a lot of time between moves, I often completed my actions in this game faster than is stereotypically the case. The variations to the gameplay assist the speed. At its core, Pawnbarian is a roguelike. Every time you dive through a level, things are different, enemy spawns aren’t identical, and this can shake up strategies. It also means when you die that you’ve gotta start from the top. 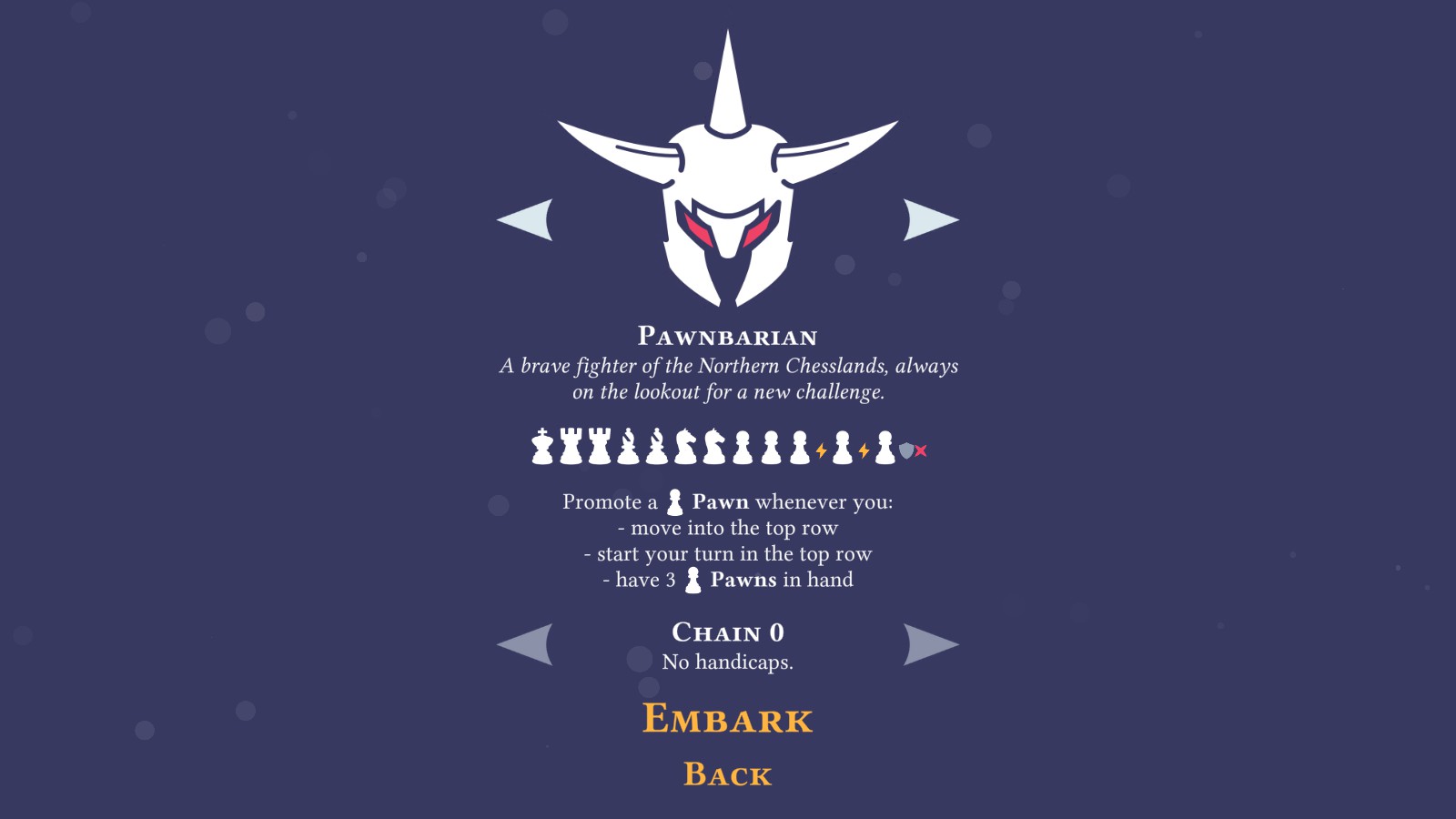 The Pawnbarian is the only character initially unlocked. It’s recommended to play through the tutorial island with them first, and this is where the differences to traditional chess become clear. For starters, your starting hero piece has four hearts’ worth of health, meaning you can sustain that many hits before dying. The pieces that you get to play each turn are random, and you always start with two energy resources to play pieces (though this can be enhanced). The Pawnbarian himself promotes a piece whenever he moves into the top row of the board, or has three pawns in hand. Different enemy pieces have varying mechanics, like dodging your first attack each turn or attacking each time the player moves. Every square on the board that’s in danger of being attacked is represented with a visual red ‘tick’ mark. One mark is one damage, two is two (clearly)- and then a skull equals four damage. That hit may not kill you, but it’s certainly a hit you don’t want to take.

Between levels, there is a market that can be used to buy health upgrades, or to upgrade pieces. For every enemy you kill during a level, you get gold to put in your gold bag, and this is used between levels. The faster you get through a level, the more rewards you get, as each turn that passes without the level ending leads you to losing the rightmost piece of treasure. Piece upgrades include augmentations that allow you to shield through damage when you play the piece, attack intercardinal squares when the piece is played, or to get an extra action just from playing the piece- and they can be stacked as well! 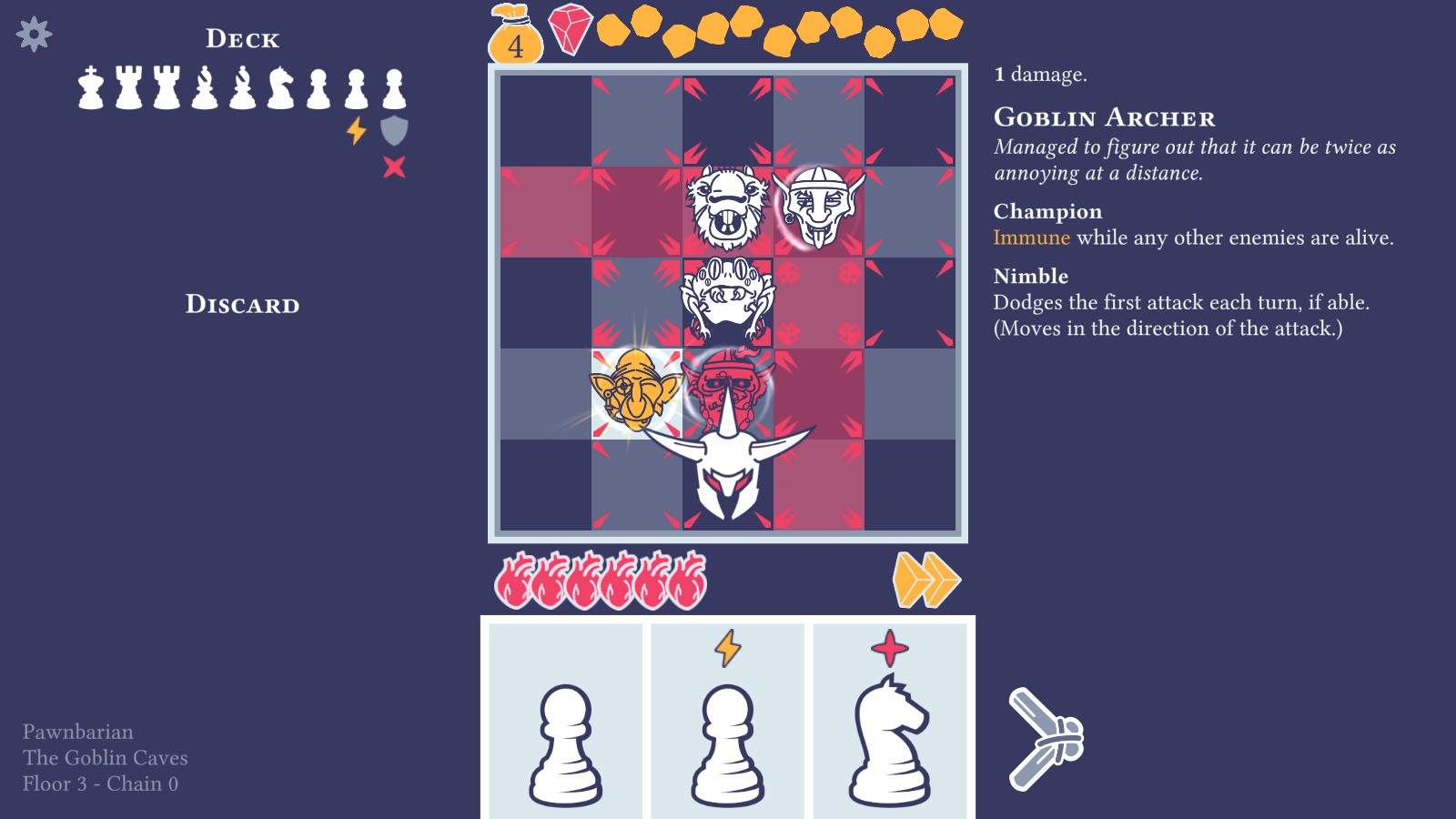 Levels genuinely get tricky very quickly with all of these things combined. The more enemies are on the board with varying mechanics, the harder it gets to find safety. Some pieces even leave behind blight tiles after you kill them or as they move, and even stepping onto one of those tiles will cause damage, even if you wouldn’t take an attack on that space. Some pieces spawn other enemies, some are invulnerable as long as other pieces still stand- and combinations of all of these get hard to deal with. I found myself often doing well up until floor 5/7 on levels, and then losing many pieces of health because of unfortunate spawns. This isn’t a detractor- it was admittedly fun to try to find the right spots to move to while taking as many pieces out as I could along my path. 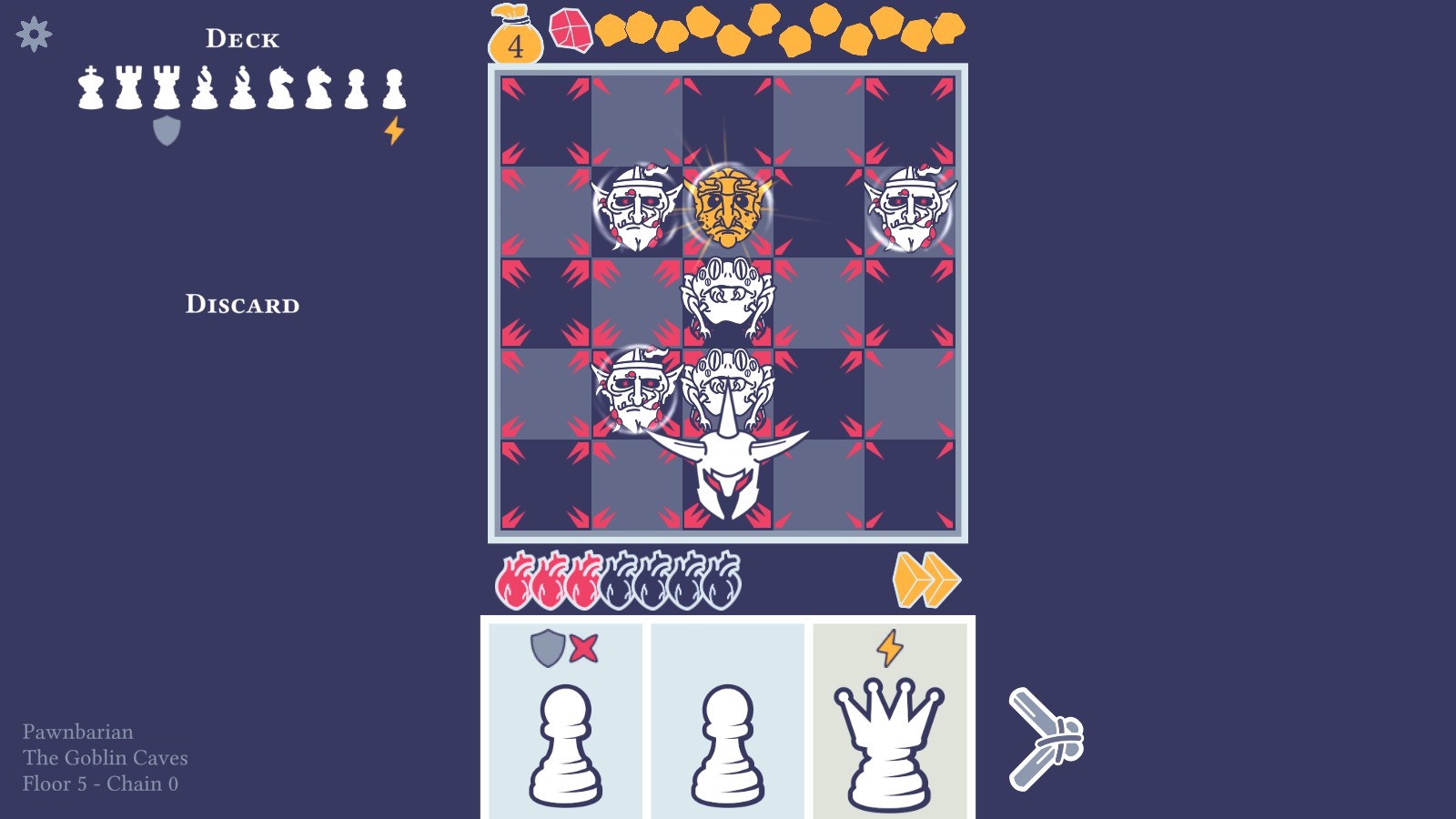 If you’re better at the game than me, you can also clear each level on chain 0, giving you no handicaps, and then get the option to replay everything with handicaps to make it even harder for yourself. This couldn’t be me, but for all you folks wanting to challenge yourself to a rougelike strategy game with chess mechanics…there you are! 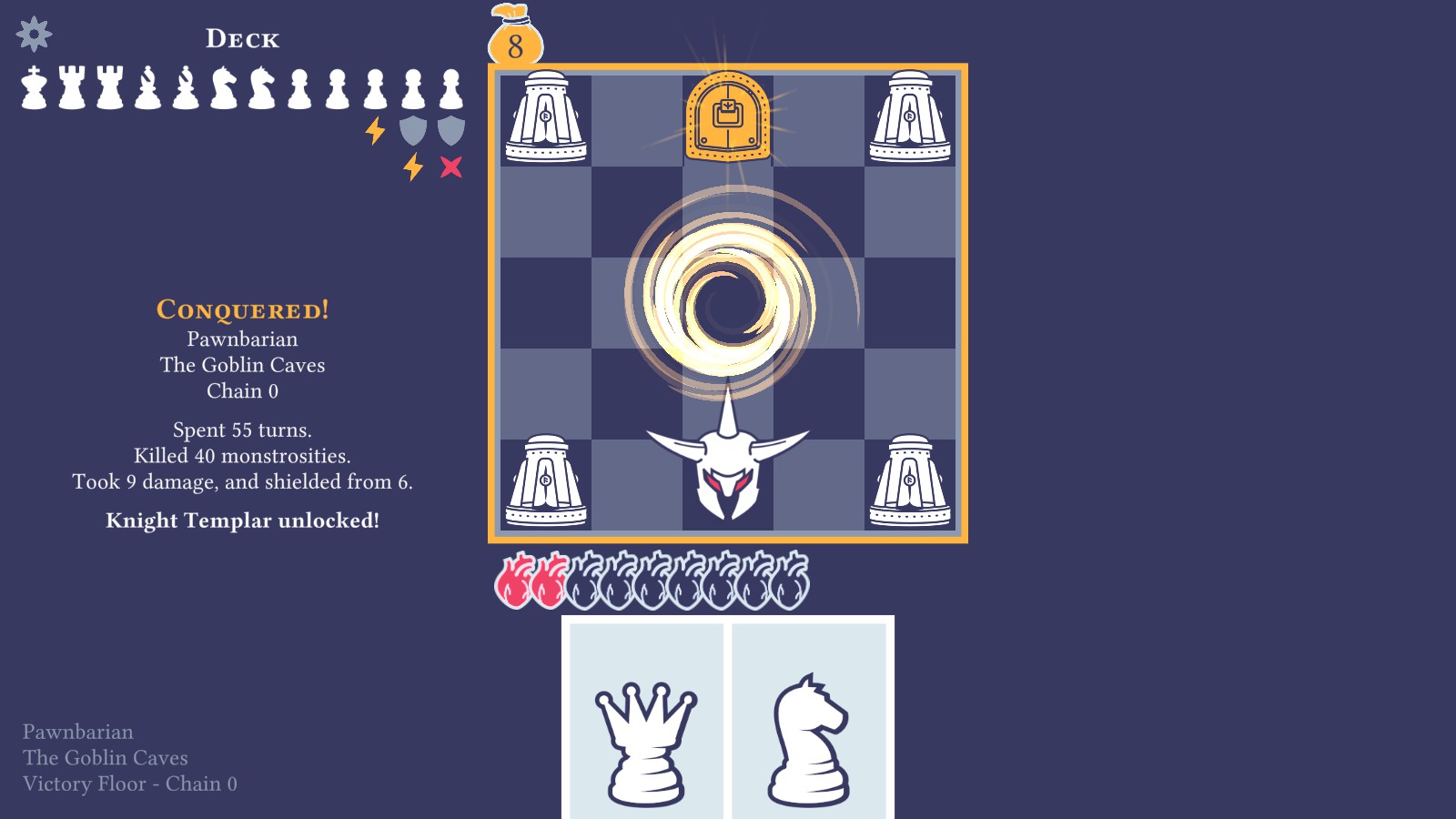 I love chess, I love roguelikes, and I loved my time with this game. If you don’t enjoy the randomized nature of roguelikes and the fact that the only real unlockable items are other player pieces or chain battles, then this one might be a hard sell. Still, there’s always a good amount of re-playability in roguelikes, and the various enemy spawns and variables of attacking pieces means every puzzle level is a little bit different. That’s enough for me to have fun, and if it is for you as well then I can easily recommend this game- provided you don’t hate chess.