I was born in the mid-90’s. I remember well all the garish colours, the “rad” patterns, and the slang that came from the era. Some people seem to feel nostalgic for much of the culture of the 90’s; I am not typically one of these people. There are series I miss, games I’d like to play again, and memories I wouldn’t hate reliving- but I’m not typically one for reminiscing. Typically, stylized era-pieces aren’t a draw for me, but The Big Con is an exception. The art style is what drew me in on the Steam thumbnail, and I didn’t find myself disappointed by what it had to offer. 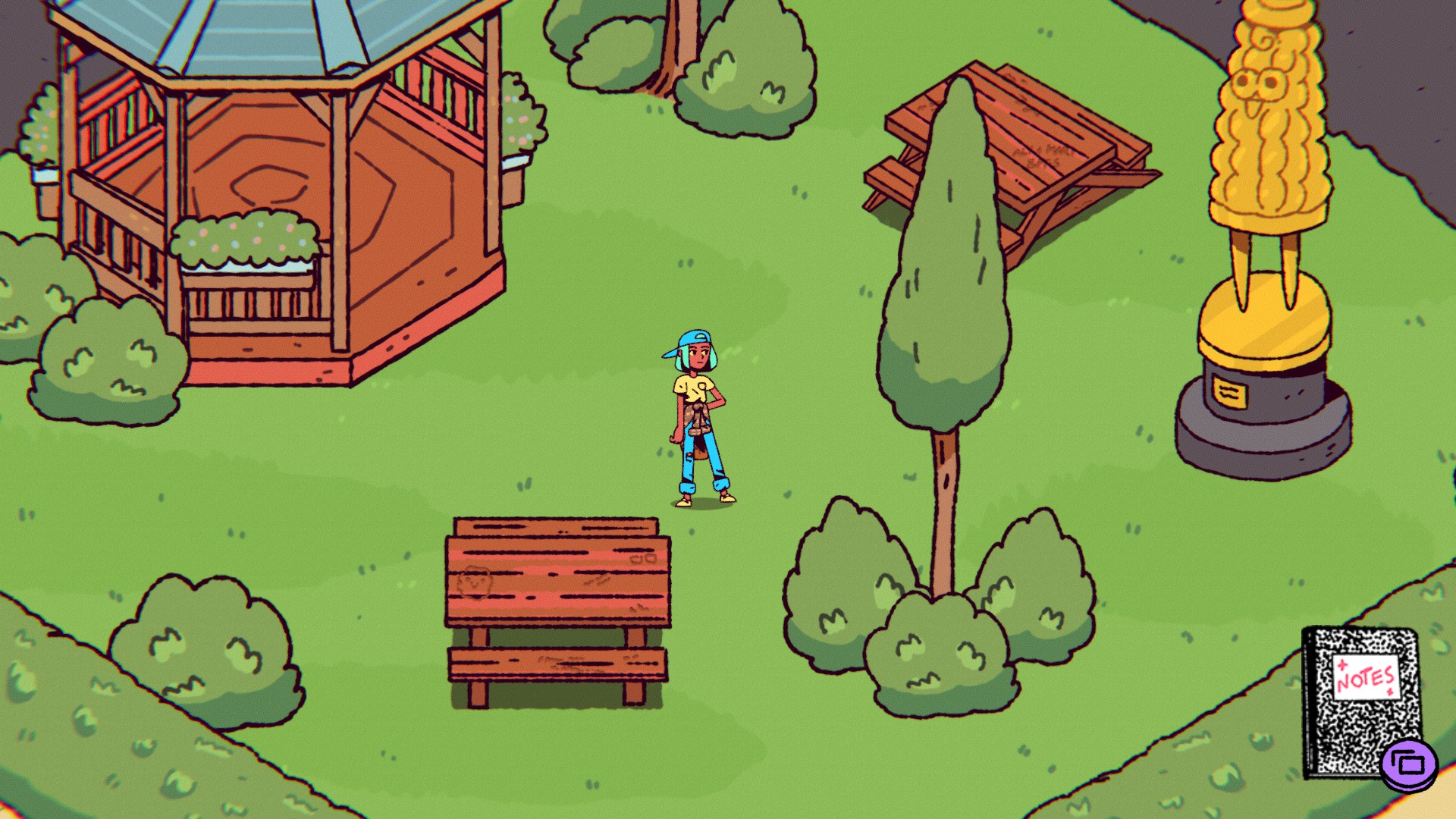 Welcome to the 90’s, everyone. What year, you may ask? Great question. My answer: it doesn’t matter! It’s all about the vibes, the energy, and the slang, here. Our main character is named Ali, and she’s 17 years old. It’s abundantly clear right away that she straddles the line between being a nerd and being cool. Her attire (and rad fanny pack) label her quite the cool kid, but her talent at the trombone makes me question- and I say this as a percussion band kid.

Ali’s mother runs a video store (rest in peace), and the game opens with Ali at a gazebo just outside of that location. As she runs around, she’s free to interact with other citizens of the town, chatting with them at her leisure. She can also simply march right up to the store with no beating around the bush. Linda is the name of Ali’s mother, and the rapport between the pair is immediately established as warm in a way that I can’t help but smile about. She states that her daughter can pick the movie they watch for movie night- but only if she can manage to get more customers to purchase/rent movies than she does. 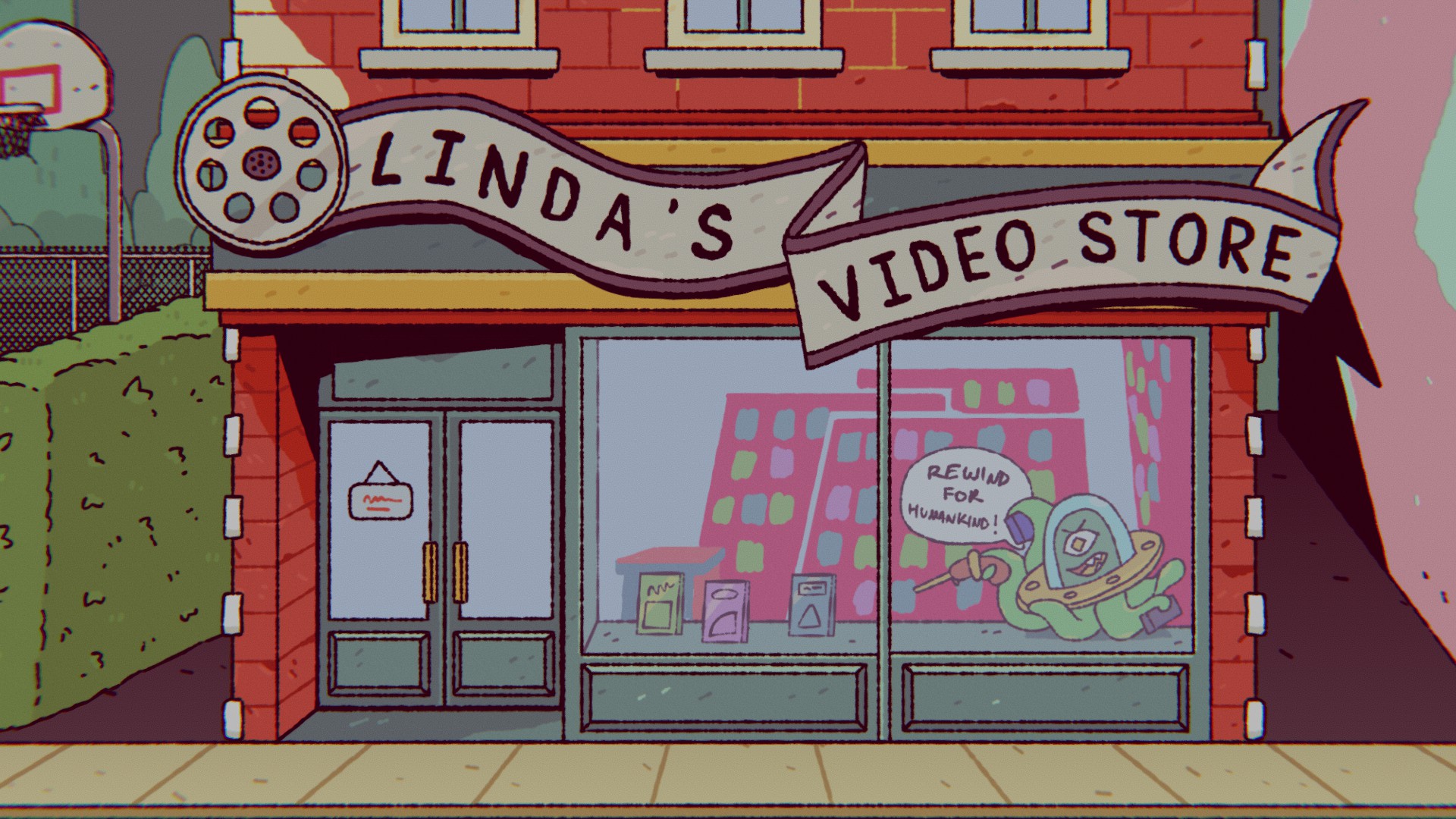 This is our first exposure to the mechanics of the game, but also to the various troubles that Linda has gotten herself into. Once Ali correctly accomplishes clearing the video store out, two men come in. It seems that her mother borrowed money to help her go to a special music camp…and if she can’t pay it back, they’ll be losing the video store. It’s not a small amount of money either- we’re talking a nearly $98,000 bill.

Thus begins Ali’s journey as she sneaks away on an adventure (with a new friend) to gather money for her mother, abandoning band camp entirely. It’s a journey of crime, self-exploration, and great affection for a family- and a dying media form.

My first impression of the game on visuals alone is strong. This is a game that thought of style as much as writing and gameplay, and it shows. The character models are highly stylized, everyone looks different, and even minor NPC’s are easy to differentiate. It’s important they’re easy to tell apart, so Ali can recall who she has or hasn’t pick-pocketed. Costumes are important as well, and Ali can equip different items to change up what she looks like in case she fails a grift and wants to try again. 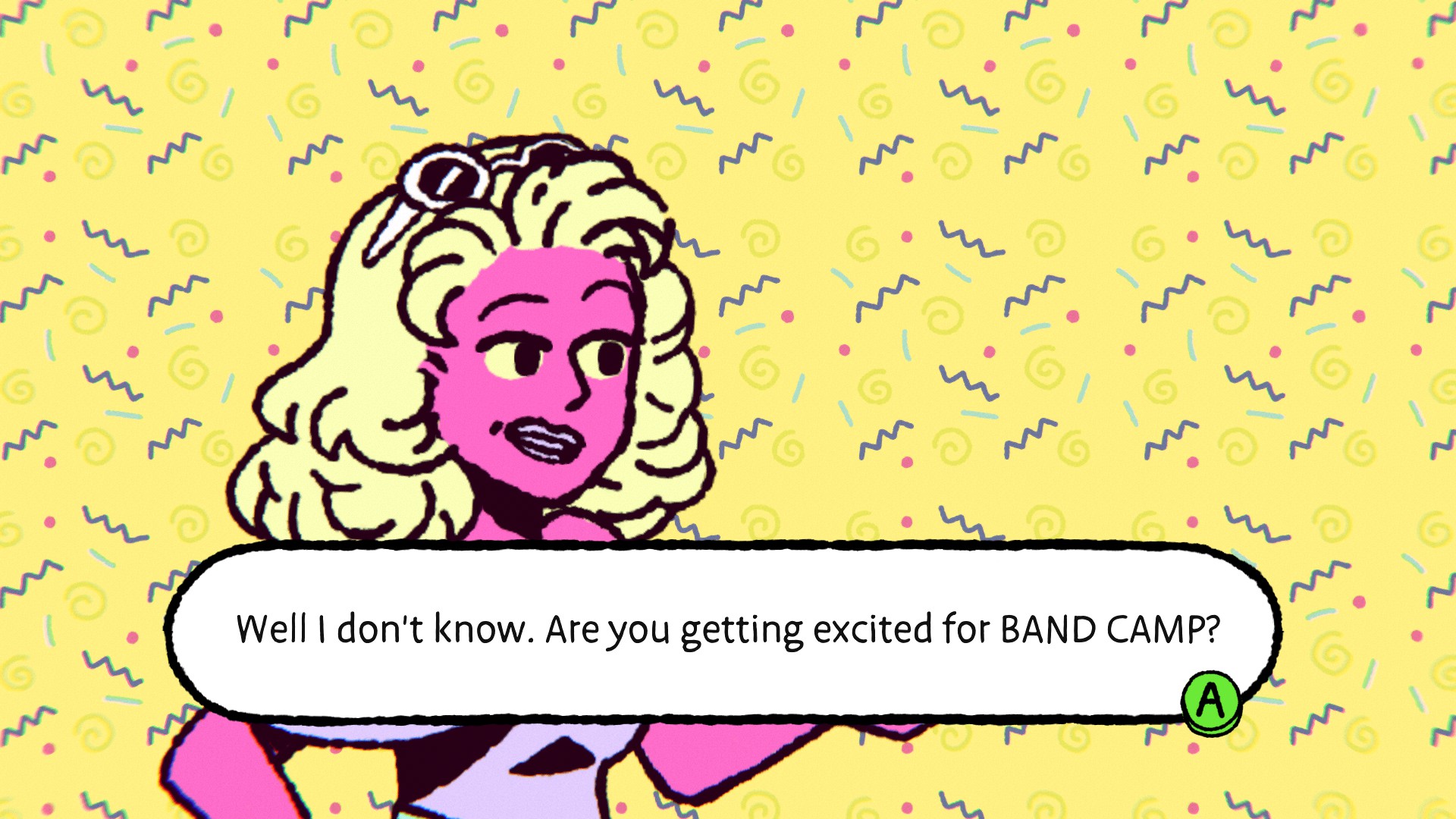 There are multiple regions for Ali to explore, and each one looks very different. Some shops are similar- but that’s also because they’re chain shops, which is a smart way to reuse resources. Besides that, varying regions were individual enough that I had to learn environments again, and where things were each time Ali travelled. I found myself wanting to explore all that there was to see, from billboards, to items, to people, to stores, and so on. There were a few issues I had occasionally with graphics, where I would clip through things or Ali’s model would freeze with her head backwards, but these were negligible and infrequent. 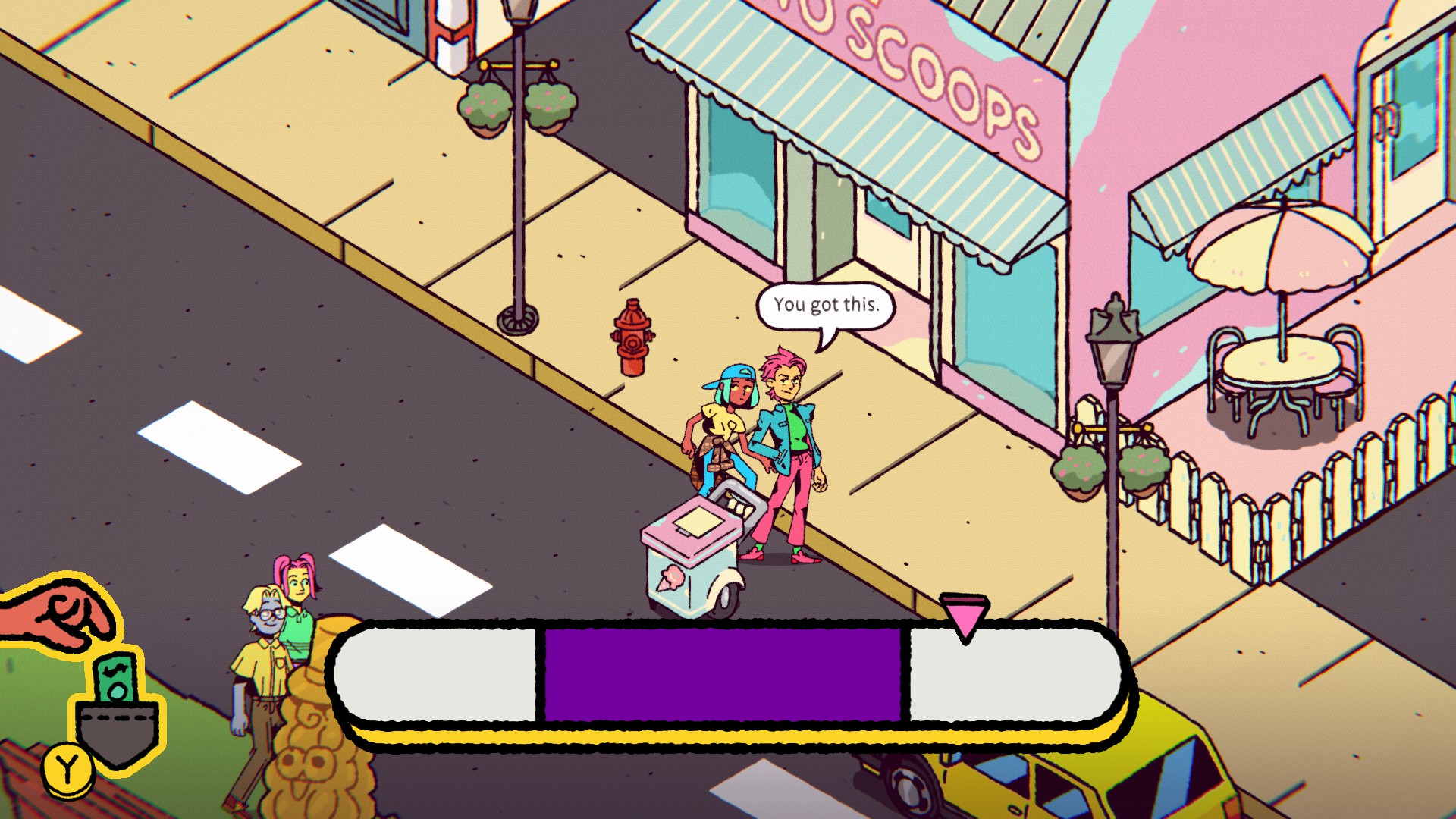 It’s crime. The main gameplay element is crime. Ali runs around after meeting a con artist, picking pockets and swiping things that don’t belong to her. Still, the game makes this as fun as possible- and decently easy, too. There are no choices to change difficulty, but I found the game didn’t really need it, and leaned more into the accessible side of things. When you approach someone from behind, you get the option to hold a button to begin to pickpocket them. A bar appears, and you need to let go of the button while the marker is in the purple part of the bar to successfully swipe things. If you’re caught, characters get a mark over them, and you have to switch your appearance before you can try again.

Each section of the game has a dollar amount requirement before you can progress. You can steal as much or as little as you want- but I chose to take all that I could in each area. The game also encourages exploration, and there are more than a few side quests to explore, and things to see-through. I also found myself wanting to chat with every NPC that came my way, and the game encourages this as well, as it’s one of the main ways to discover those optional tasks.

I greatly enjoyed my time with The Big Con. Every moment oozes style, characters are full of personality- and there’s an optional laugh track you can turn on. It’s the first thing I did, and the additional sitcom-style backing really only enhanced my experience. If you’re looking for a game focused on narrative, characters, and overall experience, I’d recommend giving this one a try.