The combination of point and click and farming sim doesn’t seem to be shown in the game. Peachleaf Pirates look like 3 different games that are combined together as a result.

The farming sim genre has been on the rise recently. They usually have similar mechanics as Harvest Moon or Stardew Valley, although other games try to mix it with other genres. Seeing that Peachleaf Pirates is a combination of point and click and farming sim elements, I become curious about how the result will be, especially since both don’t seem to be similar in the control scheme.

The game uses simplistic, pixelated visuals. All areas look similar with their various shades of green with hardly any details in them. Although I didn’t mind the monotony, the crops need a bit of tinkering. It’s hard to notice whether it’s ready to be harvested or simply sick. Some crops also look transparent after you water them, making you wonder if you already put the seeds in that soil.

To be honest, I didn’t remember much at my first playthrough since the time gap between the repetitive activities and the story progression is too long. All I know is that I must go to a certain place, although I don’t know why or what am I supposed to do once I got there. There isn’t any recap or whatsoever that you can see to check the story, and the journal that is supposed to do that feels incomplete.

I ended up knowing why the story is forgettable on my second playthrough: it is weak. It tries to be funny, but the jokes tend to miss. Dialogues are mostly about you having to go to a certain place and let the story continue from there. There isn’t any sense of bonding between you and the villagers, which is questionable in a farming sim game. 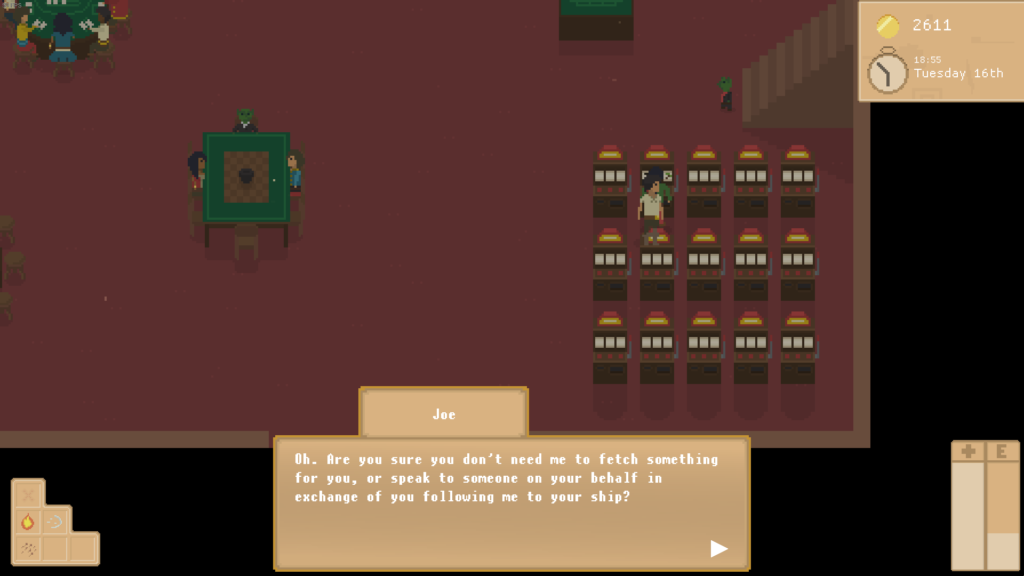 To make it worse, the story is incomplete. You started the game with a certain objective, and the game doesn’t even let you finish that objective. It claims that the story will be told in another game, but since I could finish the story in ~1.1h, I feel that it would be better if it was included in this game instead. Some areas feel useless since they are only used once throughout the story, and they could be reused in several quests to save time and effort of making new areas to introduce this new story.

Peachleaf Pirates is basically 3 games in a single package: there is a point and click that contributes to the main story, a farming sim that acts as a sandbox mode, and a hack and slash that complements the farming game with stiff controls. The only thing that connects between all genres is side quests, although the hack and slash portion needs to be played to mine some ores, which is used for the farming element.

The point and click section feel lacking. The game itself is played with a keyboard and mouse, with the mouse having a limited range of where you can interact with objects. Since I didn’t know how big the mouse range is, it defeats the purpose of using the mouse altogether, especially since you can interact with everything with your keyboard. Some key items might require you to use your mouse to use it, but it took several clicks before you can access these key items. I wished that I could just ditch the whole point and click element.

The huge town makes it hard to traverse. There are 3 towns in the game, with each housing quest that contributes to the main story. However, it can take a whole day just to fully explore a town, especially with the time-limited nature of farming games. Some quests also tend to be too vague, forcing me to talk to everyone in the town to progress. There is a person that you can talk to for hints, but they don’t always let you know what to do. The slow walking speed also makes it harder to clear the quests. 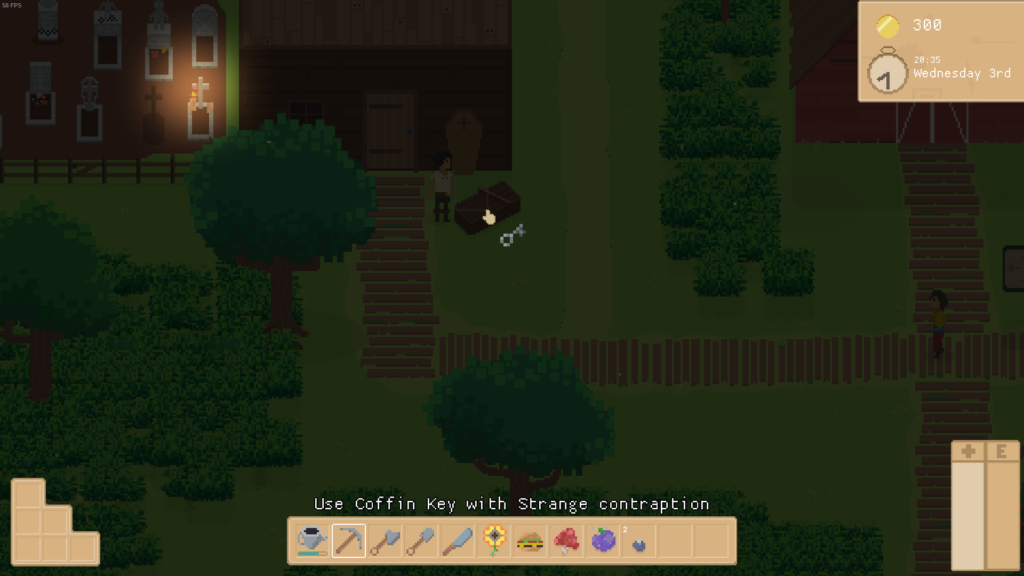 The game starts like other farming games: you can plant crops, forage items, and craft buildings. However, despite it introduces 4 seasons, there isn’t any difference between every season, especially the visuals. It might be because you were playing on a tropical island, but why introduces 4 seasons in the first place? I mean, there isn’t even any hurricane in the so-called hurricane season. The only noticeable thing is how there are more rains in that season.

Tending your crops is a chore. Harvesting crops become a “find the difference” game between unripe and ripe crops due to how similar they look. Moreover, your plants can get sick. Since the cure is too expensive, you’ll be forced to kill them with your scythe instead. It takes time to find the crops that are sick every day. 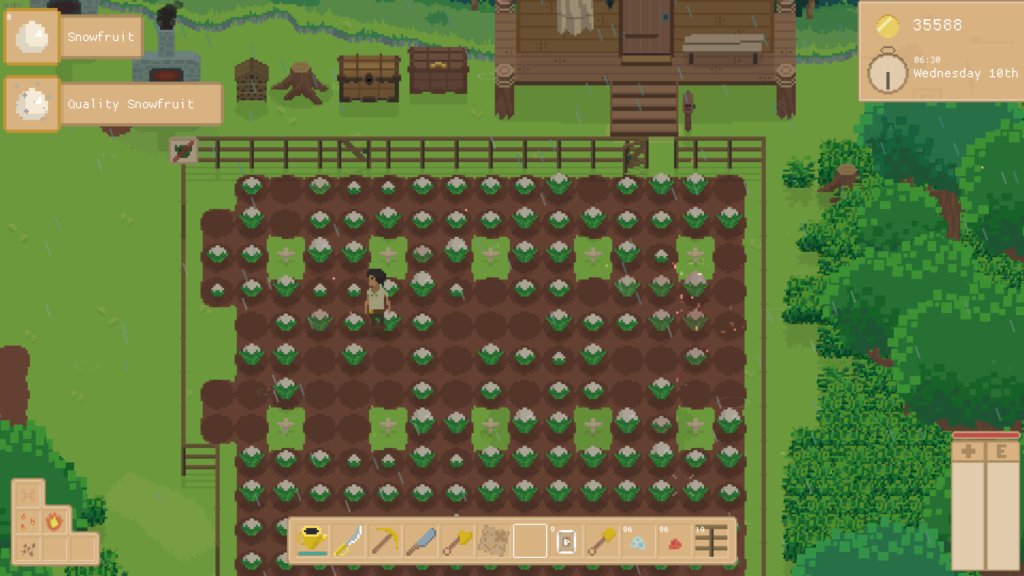 Animals are expensive and don’t seem to be profitable at all. Furthermore, the game never explains that you need to cage them to prevent them from straying too far, and my first chicken runs off to the far edge of the farm with no way of picking it up. Harvesting produce also becomes difficult since you need to click them one by one, and they tend to stack on top of each other.

There is only one combat area in the game where you can mine ores and level up. There doesn’t seem to be any benefit from doing this apart from clearing a side quest and achievements. More varied enemies will appear on the deeper floors, forcing you to change your strategy to beat them. However, despite the variety in skills and weapons, some are too overpowered. Swords deal more damage and attack speed than guns, and one fire skill is far superior to other skills. I only need to use sword and two skills to beat most enemies after I understand how everything works.

Even though you can use the mouse to interact with objects in other places, the mouse is useless in the combat area. You are forced to play with your keyboard, and there are just too many buttons to press. Strangely, skills move in the direction where your mouse is facing. I couldn’t count how many times I pressed the wrong button because of this. 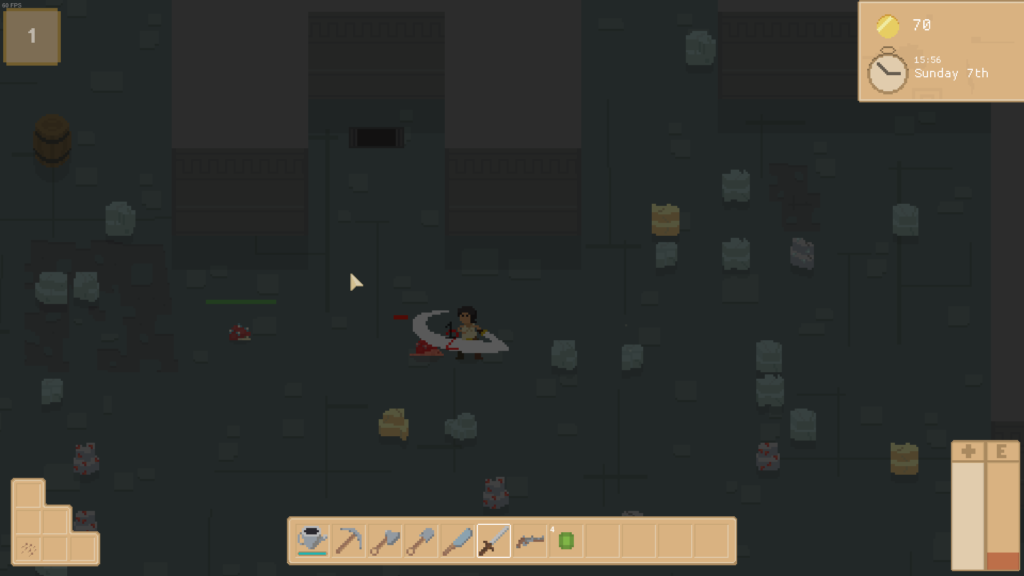 I finished the game in 7h before finishing the other side quests. The non-grindy side quest, namely finishing all floors in the combat area, can be finished in 18.4h. The main story is very short though. I replayed the game again once and it only took me 1.1h to finish. The rest of my playtime was spent grinding for the rest of the achievements, which take a very long time to finish (~20.6h).

The game isn’t difficult if you know what to do. You can always level up and carry some potions to tank the damage if you have trouble clearing the lower floors of the combat area. There is also a difficult puzzle in the main story, but you can always look for the solutions in the wiki.

The game crashed whenever I tried to sell my chicken. Controls also feel weird with the interact button merged with the use item button. There was a time when I was rushing to bed before I collapsed, and it so happened that I have sickle as my active item. The sickle can be used to put placed objects into your inventory, and yes, that’s what happened to the bed. I didn’t get enough time to set it up and sleep before the next day comes. There are also other bugs and annoyances listed here.

Peachleaf Pirates seems like one of those games with an interesting concept but fails in its execution. The farming and combat section feels useless, especially since you can finish the game without it. Moreover, all features feel to be lacking in-depth. Some ideas look cool at first glance, but they add more to the annoyances than benefits. As much as I hate to say it, I don’t think Peachleaf Pirates successfully combines both genres, and I couldn’t recommend it as of now.