A man has to relive the same few minutes of his evening that goes terribly bad, each time hoping to change things and escape the loop.

’12 Minutes’ is a short, story-driven puzzle game where our character keeps reliving the same few minutes of his evening and attempting to figure out how to escape the loop. As he comes home to his wife who has prepared a romantic dessert just for the two of them, their evening gets interrupted by a furious cop, an encounter with whom always ends up badly for our protagonist and his wife. After either getting killed, knocked out, or simply stepping out of his apartment, the main character is instantly transported back in time to the moment he came back home from work and the evening repeats. 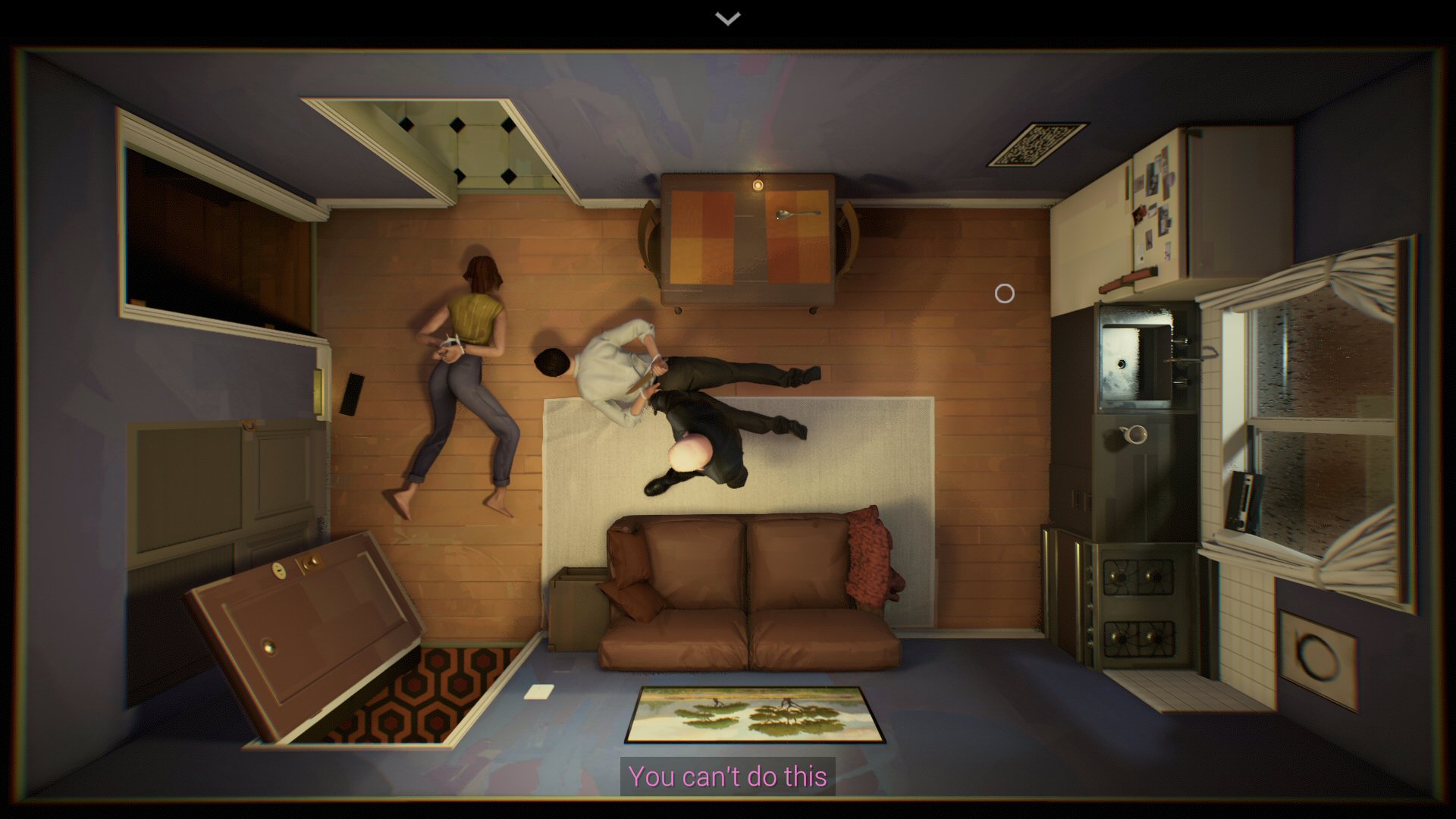 This is a pretty fun concept which has been explored in a few other games and films before, such as the Groundhog Day. The character experiencing such time loop always feels trapped and tries to figure out desperately how to get out of the loop, as well as trying to convince others around them that they are in fact in a time loop.

I won’t go into any more detail with the story in ’12 Minutes’ as this will start getting into the spoiler territory, but what I will say is that the story is quite unusual and has an interesting idea, although the execution could certainly be better and clearer, without leaving players scratching their heads, regardless of which ending they got. After having looked at the other endings on Youtube, it all made sense to me, but if you only experienced one or two endings, it might not make sense to you as you’ll be missing out on some of the key information.

The gameplay mainly consists of point and click actions and puzzle solving. We can pick up objects and use them to interact with certain parts of the environment in a hope to change something so that the angry cop that bursts into our apartment does not kill us. We can also engage in dialogue with our wife and to try to find out important plot details, although unless we do certain actions, we won’t uncover anything useful this way. 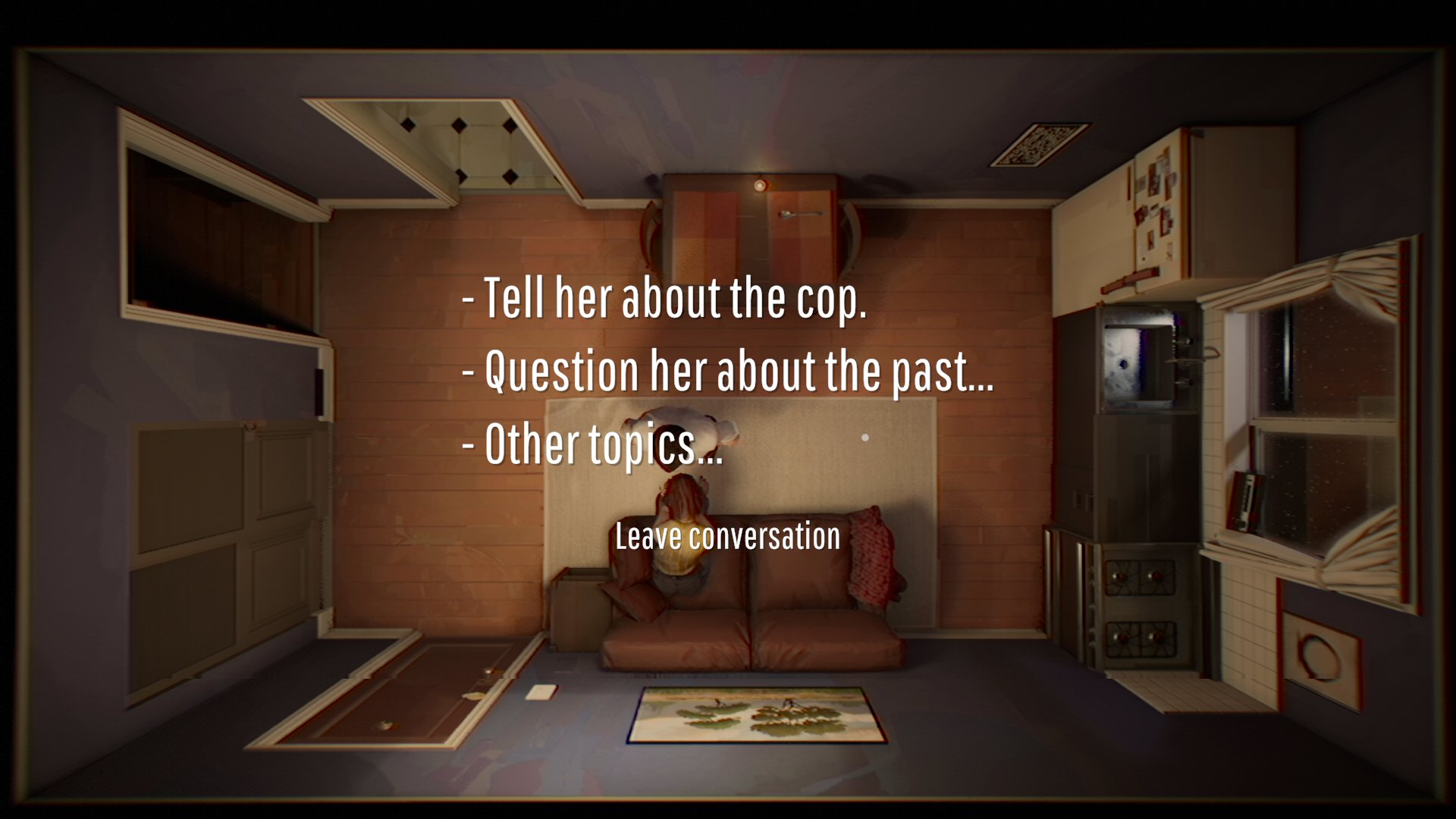 The whole game mainly takes place within 3 rooms of the apartment and it might seem that it should be pretty easy to figure out what to do. However, the solutions the game expects us to do can be pretty obscure and often getting into the moon logic territory. But this is not really the worst bit, because moon logic puzzles can at least be done through trial and error or with a walkthrough. The problem here is that actions need to be done at the right time and in the right sequence, otherwise it won’t work.

Probably still doesn’t sound bad enough. But now imagine getting one tiny thing wrong and then needing to do the whole loop again, with the same actions, same dialogue, same everything, aside from one or two new developments. So, very quickly, what starts as a fun and intriguing concept, turns into repetition and frustration. The whole concept and gameplay turns stale before you even get to the juicy parts. 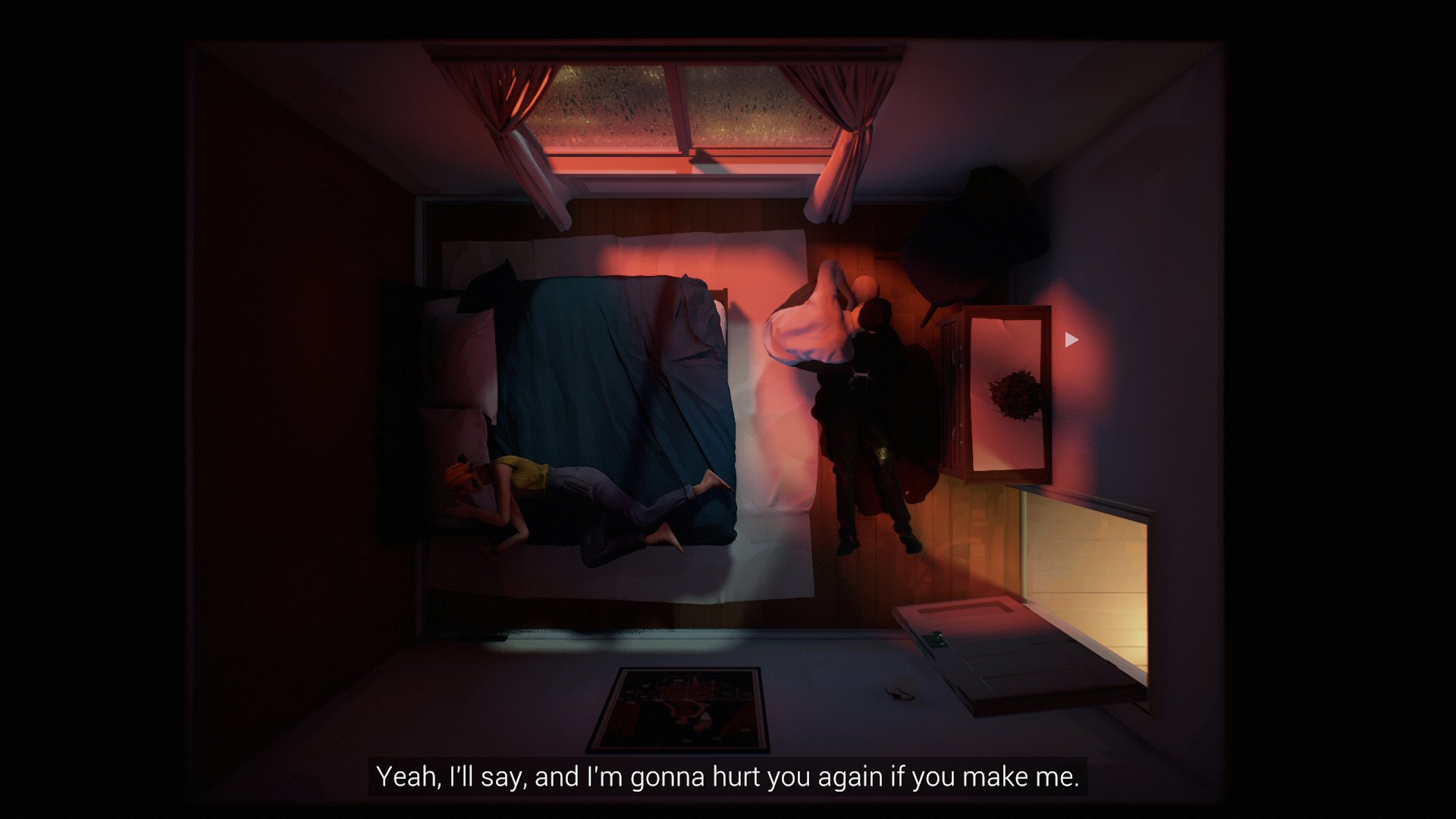 The game is generally pretty short and most of the playtime goes on trial and error and figuring out what to do, so the quality content here is rather small compared to the moments of annoyance and tedium.

I think it’s a bit of a shame really, because the idea is good and the background plot is also interesting, but it’s all executed and pulled off with a rather tedious and unrewarding gameplay loop. I think as a movie it would work nicely, but not so much as a game.

The presentation aspect is impressive. The top down view of the room and our characters is a unique and interesting idea for a narrative game such as this. All the interactable objects and parts of the environment have icons when we hover over them with the cursor. The music is also good and enhances tension during some of the important story parts.

The voice acting consists of A list actors – James McAvoy, Daisy Ridley, and Willem Dafoe. So, as far as voice acting, it’s top notch. This all the more leads me to believe that as a movie ’12 Minutes’ would’ve worked. It clearly has the budget for A list actors, so might as well go the whole way and have them act out the parts in live action too. As a movie, the whole story can be revealed in the way that would make the most impact with all key information intact, whilst as a game, there’s a chance to miss important story clues and waste too much time on repetition that dulls the experience. 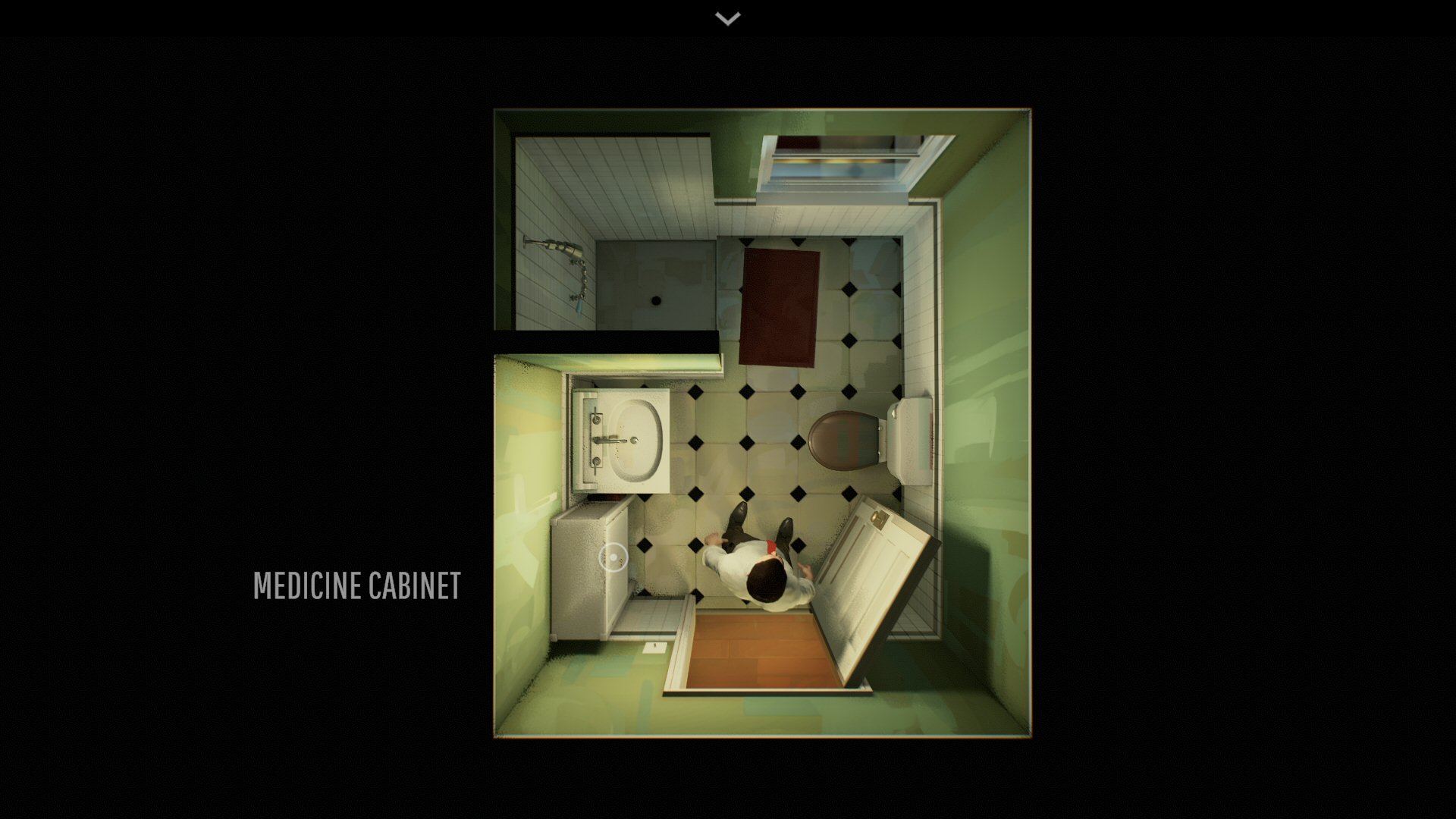 Overall I had very mixed feelings on ’12 Minutes’. On the one hand, I was curious about uncovering the plot and the idea of doing so through a time loop was interesting. On the other hand, I did not really enjoy the aspects of the gameplay and found myself losing interest quickly and getting bored of repeating things in each loop only to get nowhere. You’d gain a lot more enjoyment watching someone else play the game who knows what to do, rather than trying to figure it out yourself, failing, and repeating the same actions again. And even then, the conclusion could leave you feeling ‘meh’, especially if you didn’t get the right ending that properly explains what is going on. So, there are some good aspects in ’12 Minutes’, but I honestly cannot recommend it as a game, and most definitely not at its full price.