While Coromon is still a ways away, that doesn’t mean you can’t check it out now.

I love Pokemon. I’m not sure why I got into it, possibly because I thought it looked fun, but I’ve gotten and played each (mainline) Pokemon game ever since I played Pokemon Diamond/Pearl. It was just so fun training up my Pokemon, exploring the world, fighting against other trainers, finding Pokemon that became my favorite, finding my favorite Pokemon again when I went to the next game so they can be on my team again, and any other side activities (my favorites being the underground, the Super Contest, baking Poffins, and Pokemon Amie). And it’s a real shame that the first Pokemon in your party walking alongside you hasn’t returned after being in Pokemon HeartGold/SoulSilver (and Amity Square) other than Pokemon Let’s Go (which I haven’t played it, so can’t give any opinions on it). However, Pokemon Sword/Shield was a huge letdown and showed how stagnated it’s become. So I turned to find other monster taming games after Sword/Shield and while that meant getting a Digimon game that I haven’t touched yet, it also meant eying some newly released/upcoming monster taming games.

And one of those monster taming games I’ve been eying has been Coromon. When I came across it, I really liked the monster designs that were showcased (which I know I’m not the only one that finds monster designs important) and the art both for attacks and the environment. Since the release has been pushed, as getting a publisher is letting them improve the game even more, why not check it out now.

If you’ve played Pokemon, Coromon will be pretty familiar (and I’m not saying this as a bad thing). After picking how your character will look, you wake up to the exciting news that today is the day you’ll be traveling to the Lux Solis Campus and starting out as a Battle Researcher. After getting outfitted with gear that will let you carry Coromon and send data to the Lux Solis scientists, you’ll be taking a little quiz to help you pick your starter. Don’t worry, it won’t determine who you get, but just tell you which one will most likely match your battle style. For me, I matched with Toruga the fire turtle and picked it. Although, it was a hard choice between the others (which is a first for me). In addition, you get added to the TItan Taskforce where you’ll help the research of Titan Essences by gathering them from the six Titans that reside in Velua. You’re put on your way to get to the first one, but it won’t be as easy as just walking down an empty, straightforward path and just asking them. And well, there may also be a mysterious villain team that will get in your way as well. 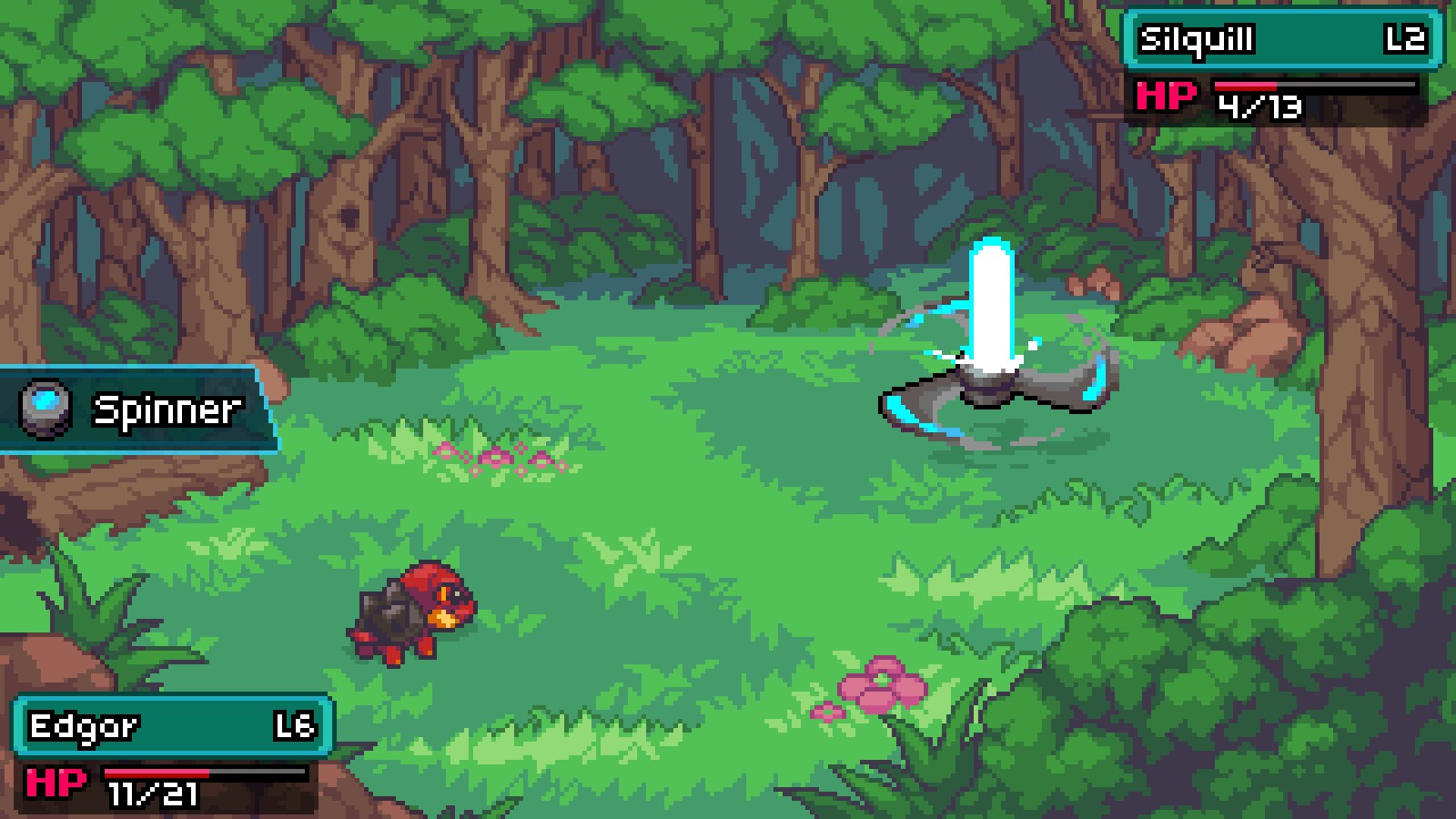 So you’re off to collect Titan Essences and catch Coromon. Walking in tall grass will give you a chance to encounter the Coromon in that area (which you can actually go to the map and click to see what Coromons appear in that area). For anyone that’s into shiny hunting, there are three different color variations that Coromon can come in. The color is determined by their Potential (or is it the other way around?) with Standard being standard, Potent being a bit better, and Perfect being perfect. You’ll then get into a turn-based battle where you can run, use items if needed (like to restore health), or fight and choose a skill. Of course, each Coromon have their own typing, weaknesses, and advantages; with skills having their own typing as well. Though it does seem there is some emphasis on status effects and to boost or decrease stats. Each skill, other than status skills it seems, will use up the SP that’s shared between all of the skills (which you can rest to regain it back or feed them a SP cake). You can choose to capture the Coromon by using a Spinner, with lower health giving you a higher chance and the type of Spinner used helping out too. You’ll also come across others with Coromon that will battle you when you get into their sights, which these aren’t too different other than going up against another Battle Researcher.

It’s hard to mess up a battle system, so no complaints here, but I do wish the skill description didn’t require you to hold the button to bring up. Granted, once you know it you won’t really need to look at it. I also can’t not talk about everything else. The music fits really well and the battle backgrounds are well done. I also love the Coromon sprites, especially since they all have their own idle animations, and the animations for their skills. You can even notice which skills that are most likely specifically for their evolution tree as some even have tailored ones, like the cyborg-like Patterbit’s Face Slap skill that shows a robot hand on spinning blades that pushes it forwards. 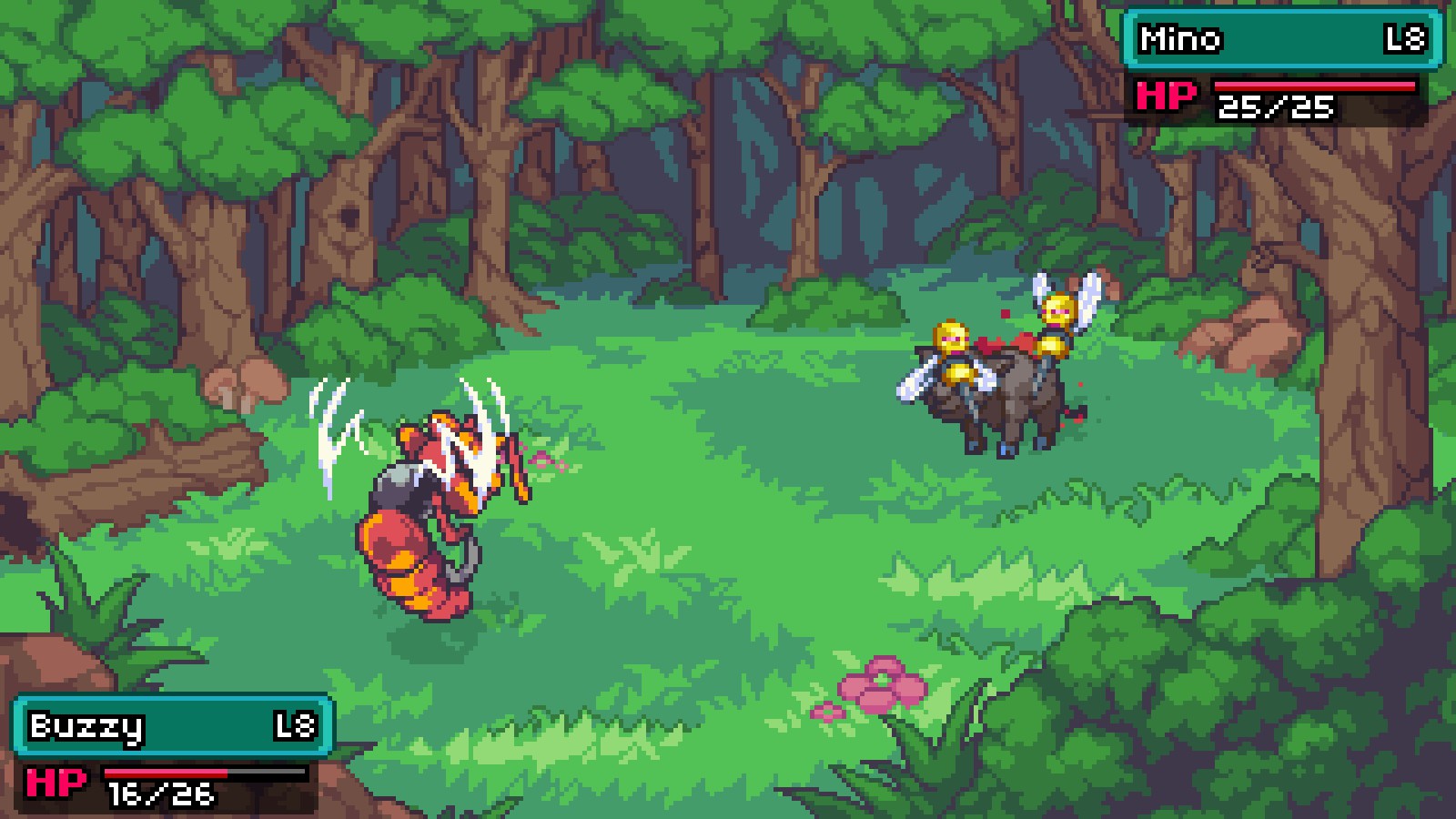 Coromons interestingly have two EXP bars. There’s the normal bar dictating their level, but their Potential EXP bar, which is filled up after so many EXP gained, will let you spend 3 points to boost any of their stats. It also must be mentioned that while they can only know 4 skills at a time, you can freely activate or deactivate skills so you’re not stuck with your (possibly terrible) decision and adapt your squad’s skills if you want. Also as someone that finds the decision of which skill to throw out hard, as I want a tough team, I appreciate this.

Being a Battle Researcher also gives you some perks. As you go through your journey, you’ll receive modules for your Gauntlet that will let you achieve certain actions. You do get a module to have a patch of grass repel Coromon, you do get a push module that lets you push heavy logs and rocks to open up paths both to your goal or when solving a puzzle area where you have to push logs in the correct order. Another one we see is a module that shoots out fire, which must start playing a part in the next area, Soggy Swamp. There is also a Milestone system that will grant you some XP and after a couple milestones you’ll get a level up and be able to collect a Promotion Bonus in the form of items or money. Some milestones include winning battles, catching Coromon, and dealing damage to a single Coromon, with some having an infinite tier so you won’t run into a situation where you suddenly stagnate. It seems pretty easy to level up as I got to the max level for this build and still had some milestones to turn in still. 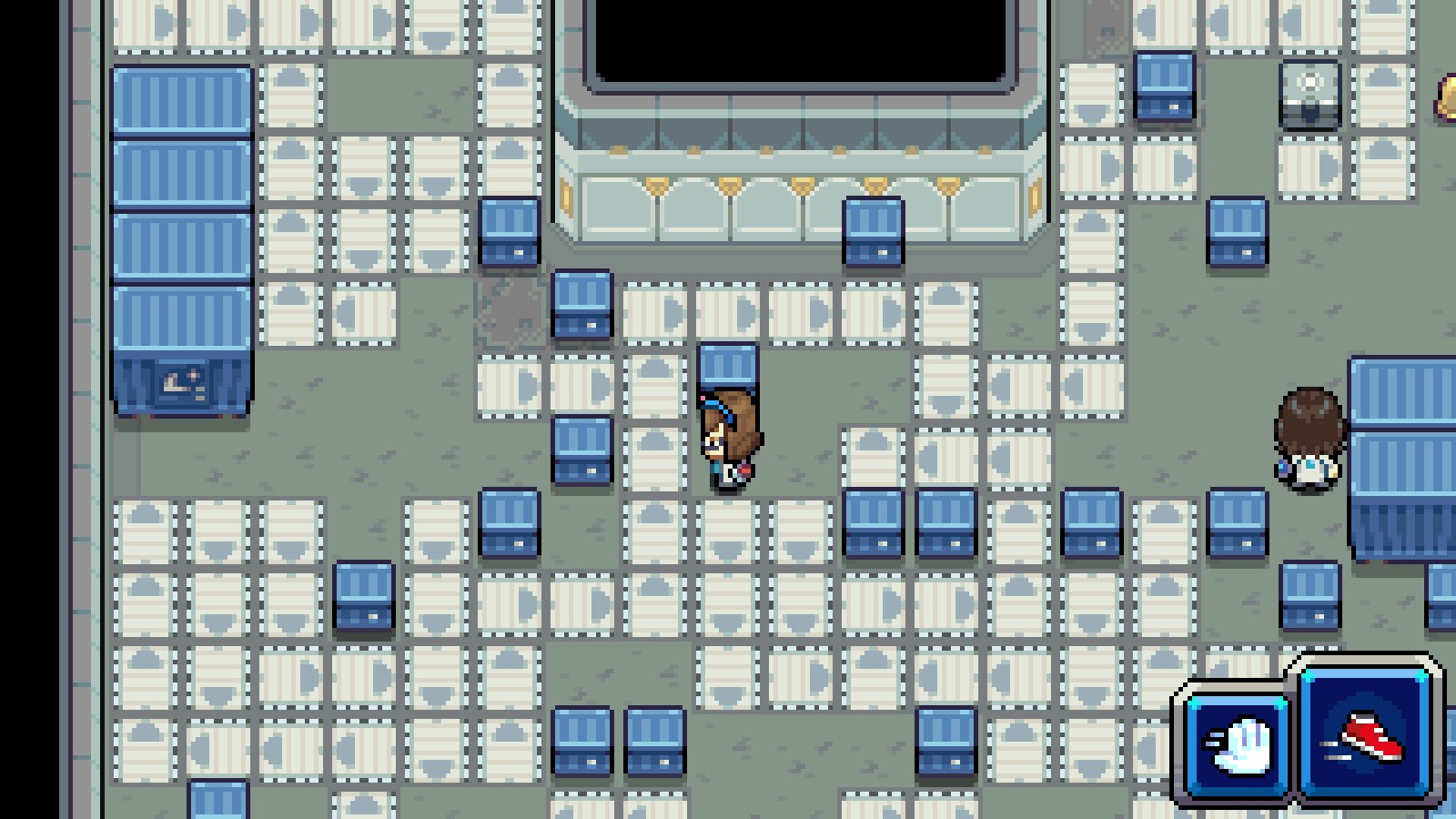 Eventually you’ll reach where you need to go, or the end of the area, and you’ll get to what you can call a dungeon where you’ll need to find your way to the Titan residing there. And this means fighting against traps, solving puzzles to proceed, and fighting Coromons or other Battle Researchers. You really do need to stock up on HP/SP cake items and revives before going into dungeons (whether they house a Titan or not) less you want to retread your steps. There is a checkpoint system near the end of the dungeons so you can travel to the checkpoint when returning, but you still have to go through a lot of the dungeon to (and I can imagine these appearing halfway through as dungeons become longer). Titans are pretty much like bosses, as they have a ton of health, hard to fight against, tough as nails, and adapts to give themselves more of a chance of winning as their health goes down.

In addition to the story, it also seems like there will be a bunch of other stuff for you to do. There are paths that deviate away from where you need to go, hidden item chests for you to spot and try to go to, and optional puzzle areas. There are also side quests that you can do to gain helpful items or clothing items and there are plant pots in towns so you can plant fruit (luckily you don’t have to water them and just wait for them to grow) which you can equip to your Coromon to use in battle or bake. 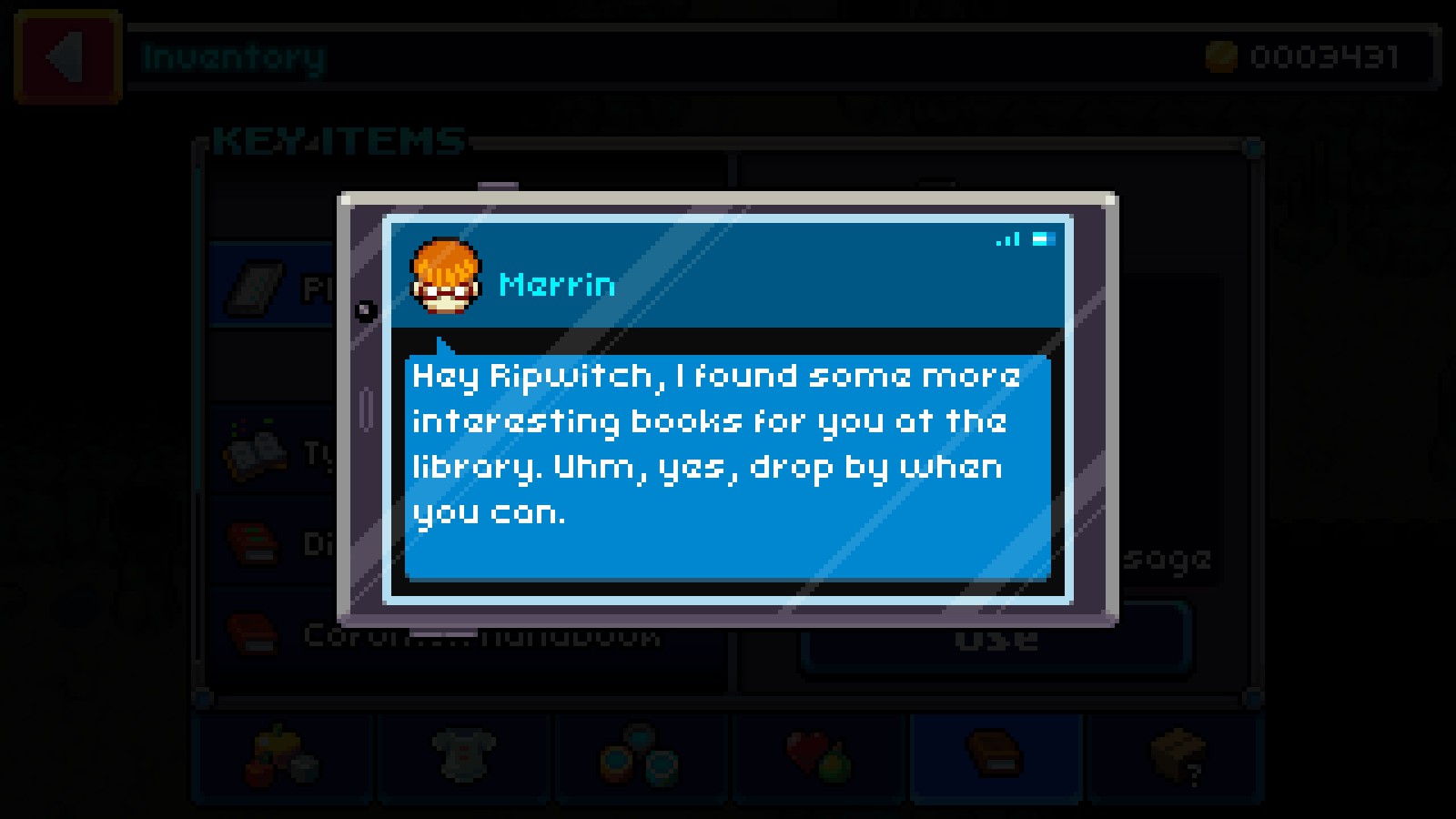 If you’ve been wanting some actual difficulty that Pokemon did not deliver on, Coromon has your back. There are multiple difficulty choices that you’ll choose from at the beginning, though Normal was hard enough for me. Although I’m a pretty casual Pokemon player, those that aren’t can go for the Hard difficulty where you can’t escape battles and fainted Coromon will leave you or Insane which is basically a built in Nuzlocke as you can only catch 1 Coromon in each area (and it must be the first one), can’t use any Recall items, and Hard difficulty rules on top of that. You can also enable the ability to have an opportunity to switch out Coromon at the beginning of battles and/or when an opponent’s Coromon faints (though as far as I can tell you won’t be able to scan the opponent’s Coromon before choosing, testing your memory on that Coromon).

For those that are wondering how it’ll be on the grinding front, it’s hard to tell right now as the full game isn’t here yet, but at least on Normal it didn’t seem too bad. I played like I would normally play and while I admittedly ran a 3 Coromon team, I was in the level range all throughout the story. 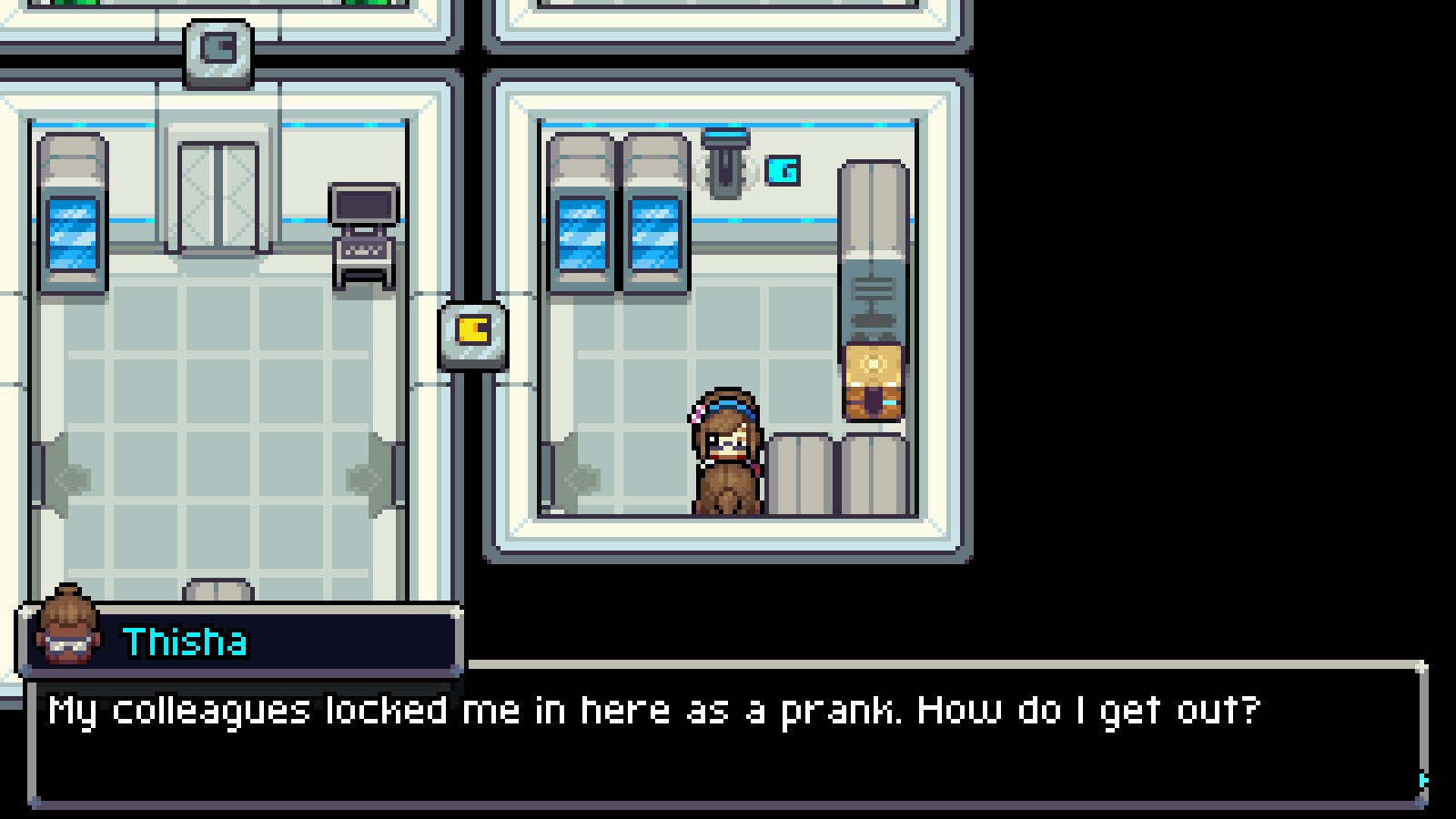 If the rest of the game continues with this quality, which it does seem like it will, this will be a solid monster taming game that Pokemon fans shouldn’t miss out on. I had fun playing through what was available and it certainly has that “I can’t stop playing” aspect as well as feeling like you didn’t spend that much time when in reality 5 hours already past by. I can’t wait until the full release. And if you don’t want to wait for the release to play it or want to try it out for yourself, the demo is still up for anyone to download. Any of the progress you make will carry over to the full game.

My hunt for a perfect Frova/Froshell so I can have a pink Glamoth on my team is still ongoing though. I WILL have that pink moth.