This is the latest big content update in POSTAL 4 called the Thursday update. We get new areas which makes the size of the map a lot bigger and as you can expect this will add a lot more chaos to our adventure! The storyline further progresses as we meet new characters that will bring the story upside down! We need one more content update to get the full release of POSTAL 4!

Here is some gameplay of the new POSTAL 4 update!
I can’t wait for the Friday update!

As expected this game plays out just like the previous installments. It is an Open World sandbox game with a lot of freedom, to say the least.

World and mission design
As mentioned in my previous review,PREVIEW: POSTAL 4: No Regerts, the world and mission feel like a next-gen variant of the previous installments of POSTAL 2, etc. They perfectly captured the essence of an open-world sandbox game as every mission plays out differently and is doable in multiple ways. Overall I was very pleased with the game at that point, fast forward a few updates and patches later and we get a slightly more stable experience. The Thursday missions are just as good as you start with a very action-packed and creepy situation and work yourself down to the more traditional Postal missions. As usual, every mission makes fun of usual first-world “issues” which I did quite enjoy as well as the well-thought-out mission design. There were some pretty solid parkour-based missions as well which reminded me a lot of Mirrors Edge to some extent.

Current longevity of the game and the Map being under construction:

Keep in mind that this game is still in Alpha which should be a slight indication that you should be a little cautious about buying this game. The story still hasn’t been completed, you finish the game in the middle of the storyline I suppose…future updates will be coming but I am just commenting on the current game. Various areas on the map are under construction and cannot be entered, some other buildings despite being on the map have no furniture nor NPCs inside of them.

As expected, Running with Scissors did a very good job at continuing their game and bringing it one step closer to the finish line! The map feels decently big now and you won’t be greeted constantly by “under-construction” signs. There are still some random buildings that are empty but in my new playthrough, they were a lot less frequent. 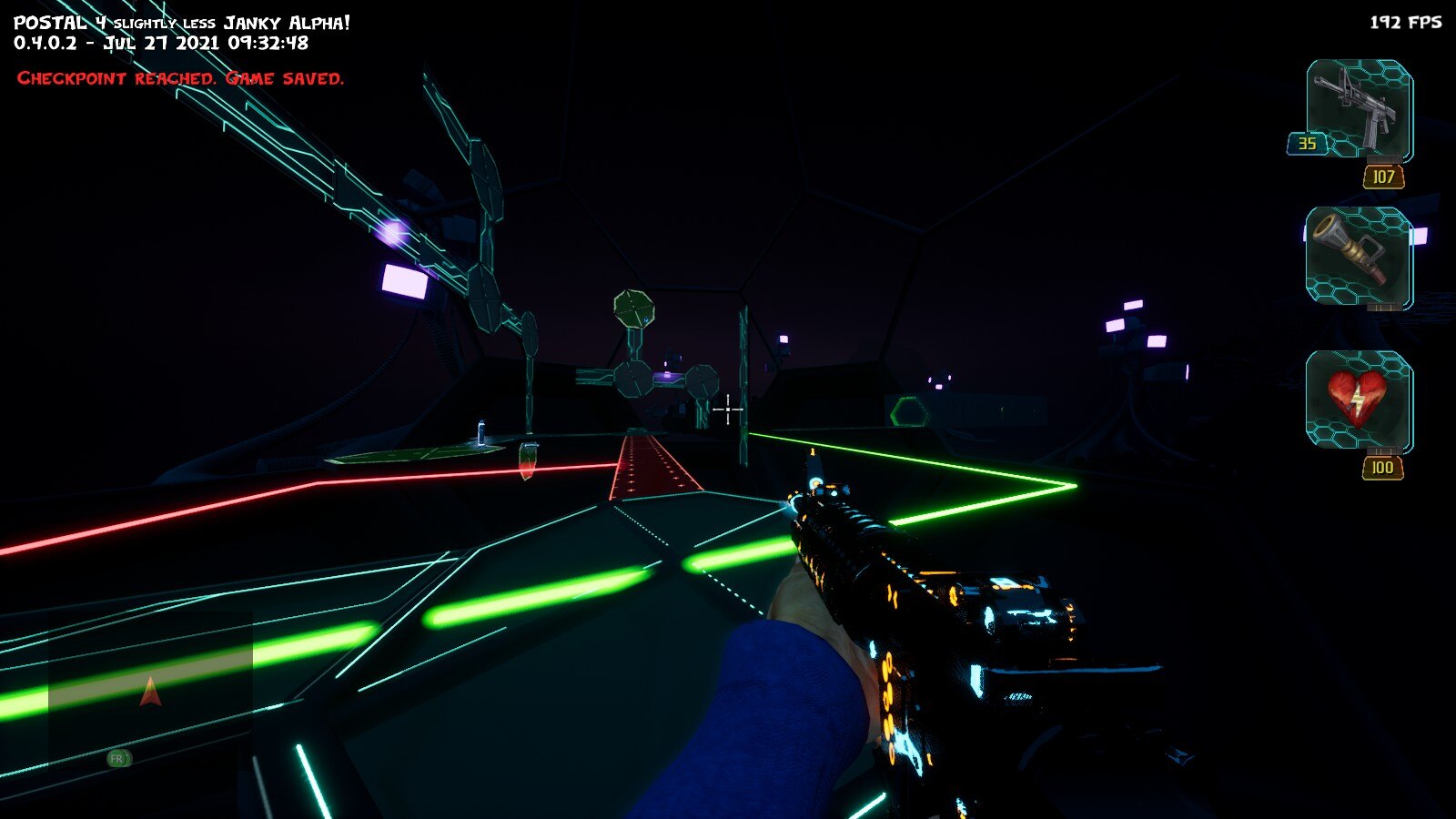 This is your usual Low-life Postal story. You decide to take a piss in some deserted WC and leave your camping van unlocked in the streets. After realizing that it got robbed you decide to go to the city and earn yourself some money to get your van back. While trying to get your things back you get to meet a lot of “interesting” people in this city. Knowing that this is a Postal game I am sure that it won’t surprise you that sometimes you will have to catch various animals for some hungry Animal Control Service guy hiding in his Truck. You might even think that entering a building with heavy security and with an aggressive gnome being the Boss just to install ass washers in their toilets would be too much, right? Perhaps waking up as a cat after sniffing too much of the secret gas in someone’s basement? Yeah, that is the godly story of POSTAL 4! In the new missions, you will get a huge variety going from VR-based reality to meeting some old friends as well as becoming a fireman! The storyline is getting closer to the end and it is becoming a lot more entertaining to how we solve the mystery! 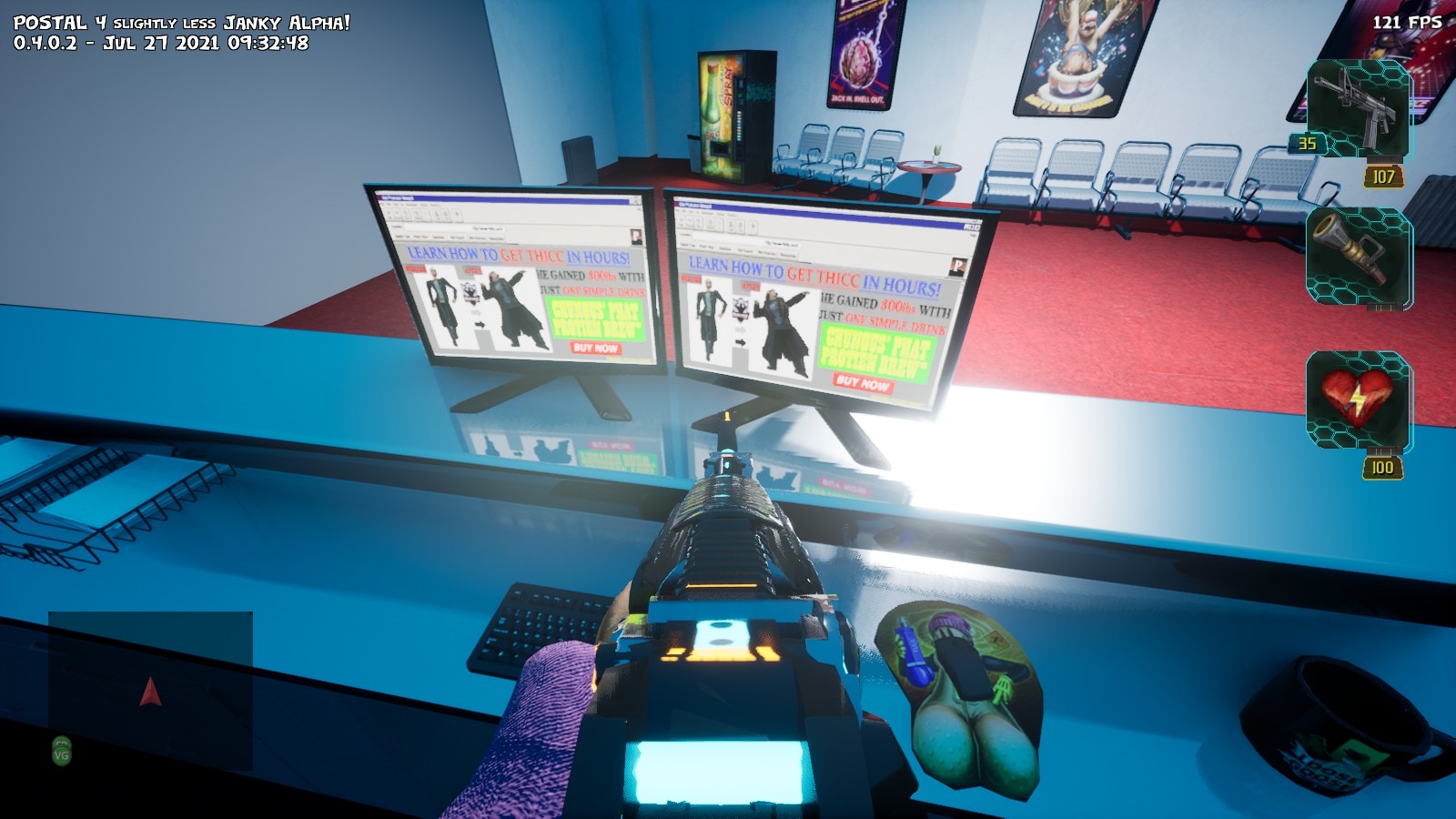 The game engine used by the devs for this game is the well-known Unreal Engine 4.

Graphics:
Most of the animations are still pretty basic, with the expectation of taunts that you can do in 3rd person mode. I do feel as if POSTAL 4 got a minor graphical boost as some of the textures look a lot more sharp and vivid looking. Lighting is pretty basic as well as world population but other than that it is still a decent-looking game! 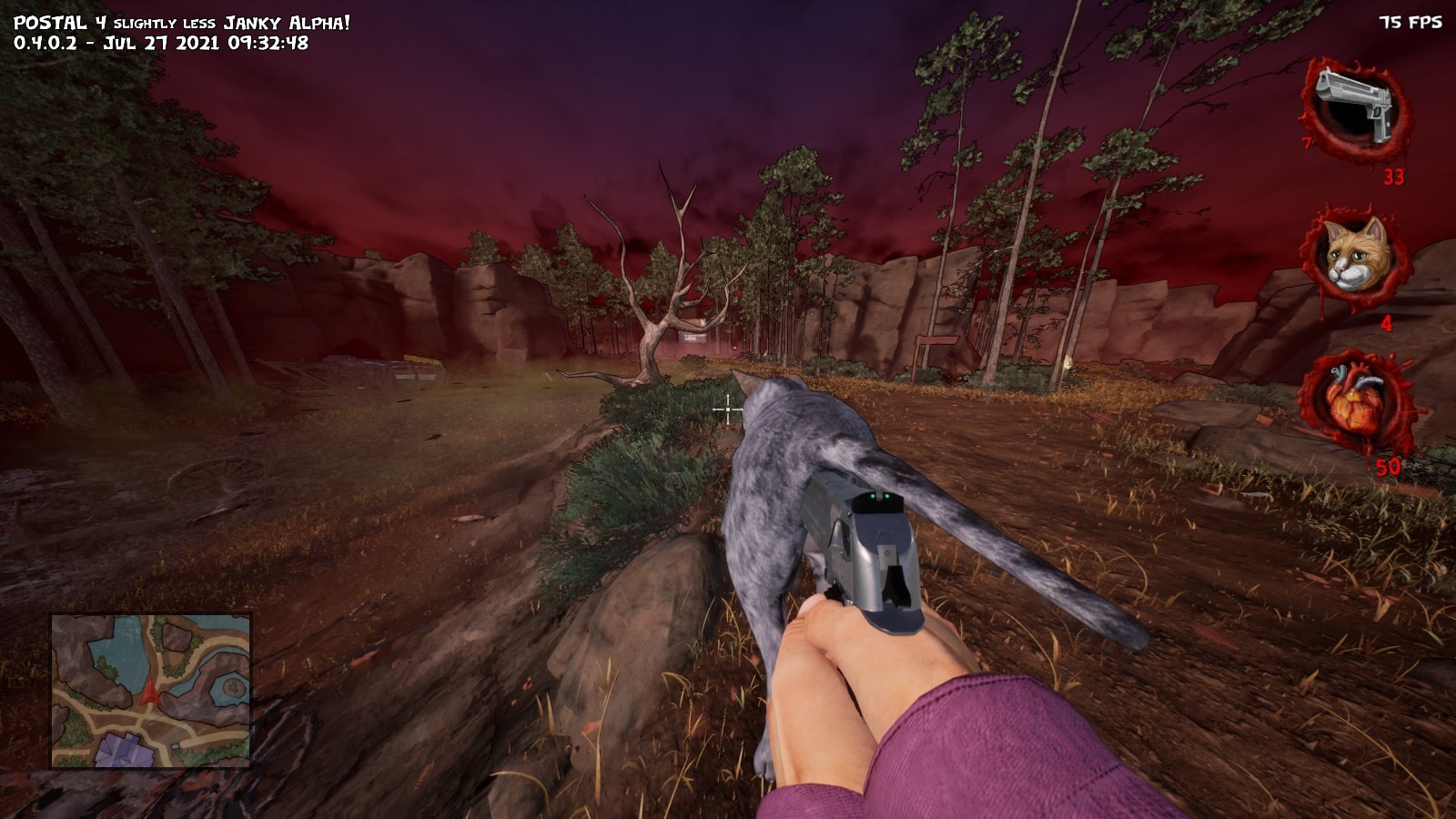 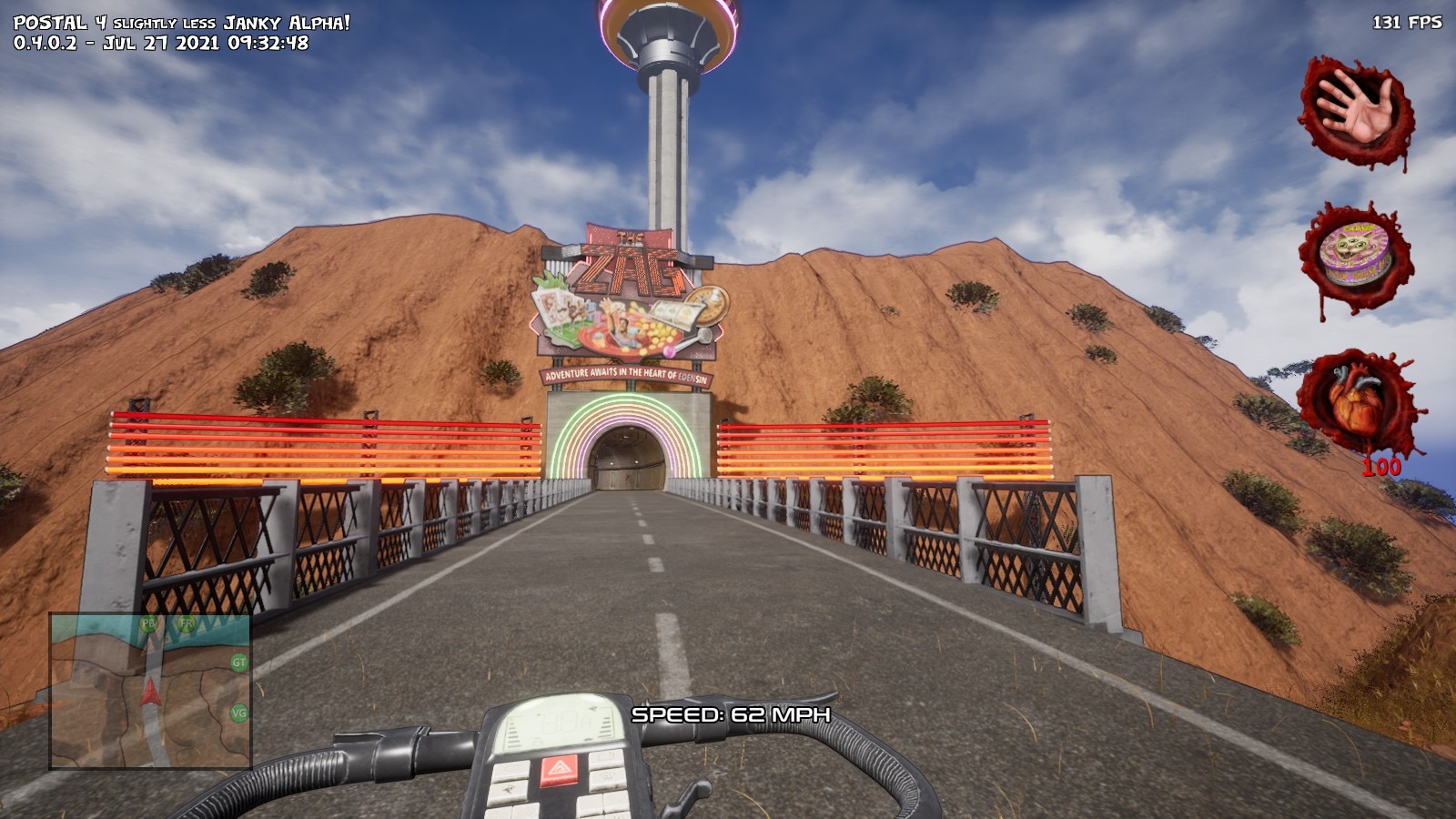 Audio / Soundtrack:
Voice acting is pretty mediocre but the saving grace is the Postal’s dude voice actor. Jon St. John is the voice-actor playing the Postal dude he had worked on other characters as well such as Duke Nukem. Background sounds are pretty basic as well but the best moments came with the town radio and their hilarious dialogues. I personally really liked the audio within this game despite it not being the best. Some of the voice acting in the new mission is slightly toned down. The problem with that is that I couldn’t understand some of their lines without turning the sound up a bit!

In 7 hours I experienced a crazy amount of crashes and some pretty impressive glitches and bugs. I am talking about game-breaking bugs as sometimes I had to restart the game and redo the mission to advance. I won’t go that hard simply because the game is still under development but most of you should keep that in mind.

After adding another 4 hours I can confirm that the game has still some bugs and glitches but with a much more satisfying framerate! 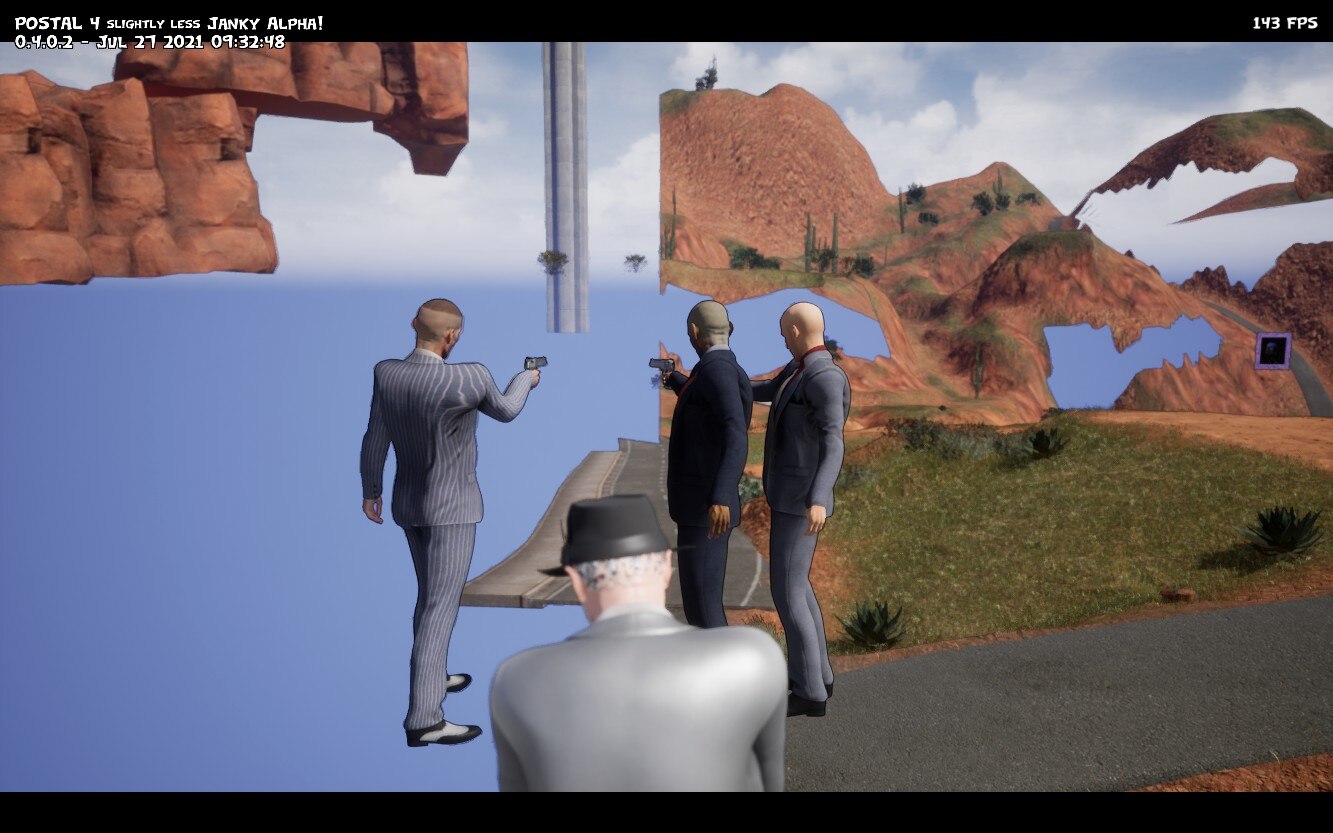 POSTAL 4 was already a good follow-up to POSTAL 2 but with the recent patches and updates it got upgraded quite a bit as both the map and the storyline benefited a lot from these updates. I can now recommend this game at full price as the content got a huge upgrade and we are still waiting for the Friday update which will be the final chapter. The game can only get better!