I truly have NO REGERTS, outside of some issues…

POSTAL 4: No Regerts is the long-awaited true sequel of POSTAL 2 as the third title wasn’t made by the original development team. Keep in mind that POSTAL 4 still is in an Alpha stage or in Early Access and the last known update was released back on 27 January 2021.

I still got second thoughts…

Keep in mind that POSTAL 4 was released 1 ½ years ago. And the game still isn’t ready and even the areas where this game is completed feel pretty much underdeveloped. I can obviously understand that due to the Pandemic and other factors things probably were slow. Still, the game needs a lot of work and not everyone has a capable PC. The game was obviously a Joy but sometimes it was frustrating, to say the least.

As expected this game plays out just like the previous installments. It is an Open World sandbox game with a lot of freedom, to say the least.

Open-World and Missions:
POSTAL 4 really tries to bring that next-gen feeling and I will actually give the devs props here as the game feels a lot bigger with much more detail in each mission/ district. Every mission as of today feels and plays differently from the other which is great to see from an Open-World game. What I really liked is that you can actually complete a mission in multiple ways which proves that this is a pure Sandbox game capable of allowing you to approach each mission in a totally different manner. That is what I consider a serious sandbox game in all honesty. What I appreciated a lot was the fact that they added scooters that truly aid you when it comes to going from A to B. As mentioned the map has multiple districts and outside of the scooters you only get a subway station. Going by foot isn’t the best idea either as this can make the game a walking simulator due to the distance you’re covering. Lastly, you can find various weapons ranging from real guns to pistols with cats as silencers…yes, this is amazing.

Current longevity of the game and the Map being under construction:
Keep in mind that this game is still in Alpha which should be a slight indication that you should be a little cautious about buying this game. The story still hasn’t been completed, you basically finish the game in the middle of the storyline I suppose. Obviously, future updates will be coming but I am just commenting on the current game. Various areas on the map are under construction and cannot be entered, some other buildings despite being on the map have no furniture nor NPCs inside of them. Lastly, the subway station I was talking about has 4 districts as destinations and only 2 of them are available.

This is your usual Low-life Postal story. You basically decide to take a piss in some deserted WC and leave your camping van unlocked in the streets. After realizing that it got robbed you decide to go to the city and earn yourself some money in order to get your van back. While trying to get your things back you get to meet a lot of “interesting” people in this city. Knowing that this is a Postal game I am sure that it won’t surprise you that sometimes you will have to catch various animals for some hungry Animal Control Service guy hiding in his Truck. You might even think that entering a building with heavy security and with an aggressive gnome being the Boss just to install ass washers in their toilets would be too much, right? Perhaps waking up as a cat after sniffing too much of the secret gas in someone’s basement? Yeah, that is the godly story of POSTAL 4!

The game engine used by the devs for this game is the well-known Unreal Engine 4. 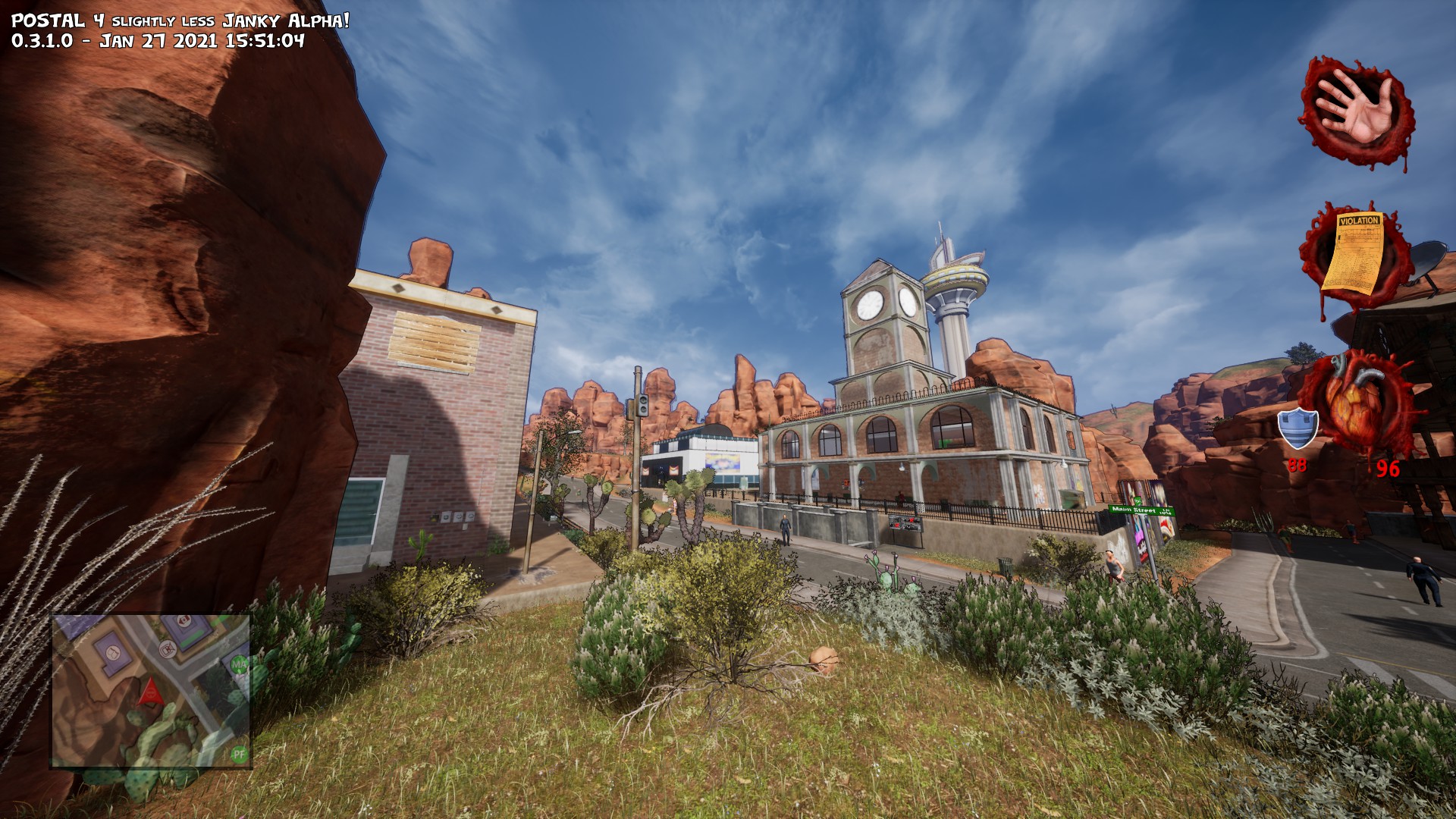 Audio / Soundtrack:
Voice acting is pretty mediocre but the saving grace is the Postal’s dude voice actor. Jon St. John is the voice-actor playing the Postal dude obviously he had worked on other characters as well such as Duke Nukem. Background sounds are pretty basic as well but the best moments came with the town radio and their hilarious dialogues. I personally really liked the audio within this game despite it not being the best.

Bugs / Glitches / Crashes:
In 7 hours I experienced a crazy amount of crashes and some pretty impressive glitches and bugs. I am talking about game-breaking bugs as sometimes I had to restart the game and redo the mission in order to advance. I won’t go that hard simply because the game is still under development but most of you should keep that in mind.

POSTAL 4 is in my opinion a very good follow-up to POSTAL 2. It truly is the successor simply because of its ridiculous plot and characters as well as detail in some of these totally weird yet entertaining and bizarre missions. Sadly due to the game being under heavy development, I cannot comment on the full game yet. It should be expected that some assets might be incomplete and the performance is truly terrible but luckily the devs already posted news of a new performance patch. In short, the game is pretty acceptable at the moment but it is barely a pass for me due to the alpha limitations.