A Hell’s Belles interview with a succubus named Cinder about the ups and downs of mediocre gigs in the making and what they actually bring to the table. If anything.

Helloooo, you gorgeous residents of this hell hole called Earth and purveyors of finer things in life. Smuttley, your favorite reporter imp from Down Under, no, not Australia, a little bit further down, speaking. For this month’s edition of Hell’s Belles we’ll be talking to, and ogling, Cinder, one of Hell’s numerous sexy succubi trying her hands, boobs and other lovely body parts at a new digital gig. Without further ado, let’s go probe her thoughts, and maybe some other things if we’re lucky. Unless..is this a, mostly, family friendly interview? It is, isn’t it? 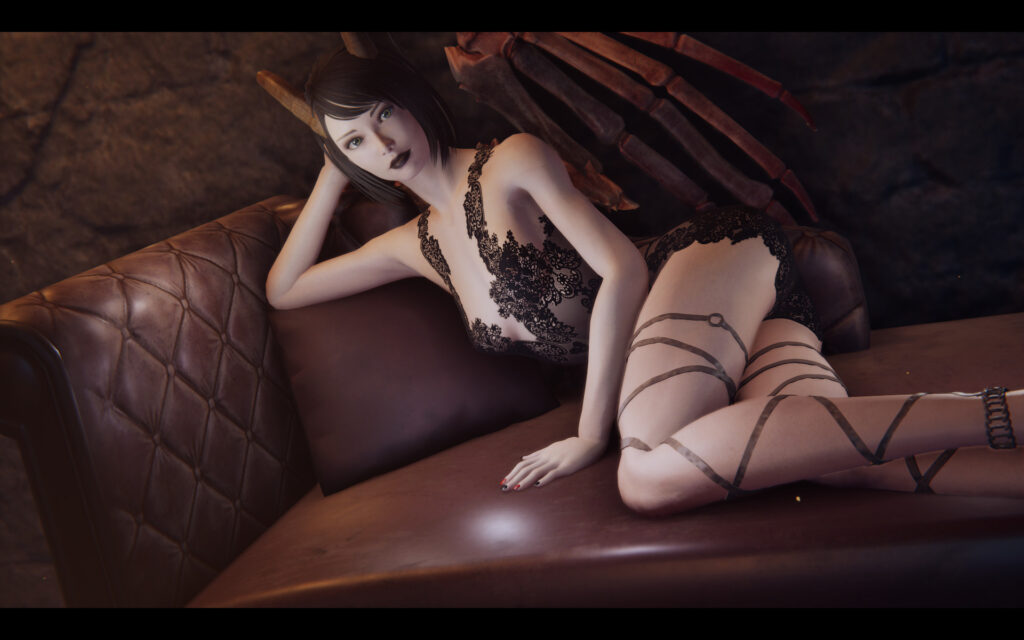 So, Toots, How’s the Gig Treating You?

Call me toots again and you’re going on display on one of my newest dungeon implements. The gig is shallow. Dazzling, but shallow. Nothing grand or worthwhile experiencing for more than a few hours in its current state. At least the price isn’t a barrier for entry and the makers seem eager to please, constantly upgrading something or adding bits and bobs. But, let’s get something out of the way immediately. Visual, make-up and clothing teams far outweigh the second-rate combat and stunt instructors, and don’t even get me started on the third-rate hacks they hired as writers. I mean, I’m always down for some mindless slaughter of random races plucked from Hell’s waiting lines, and undead make good punching bags, but there’s not even a smidgeon of a story peeking anywhere. Feels hollow and empty, like you and a couple of your imp reporter buddies after a night of sex, drugs, torture and booze.

Right, back to what they call customization here. The malleability of my body features is awesome, I adore the freedom it gives me to morph myself. The potential client can experiment with me in many areas, even completely removing my horns and wings, in case they’re not comfortable with some horny, fluttering action, and like their dolls clean. The make-up department has really outdone itself. I love all the shades they’ve procured, and it seems they have more palettes coming. And the clothing team is simply marvelous. There’s a ton of stylish, hot stuff on offer. From different lingeries, stockings, bras and panties to some seriously sexy, and remarkably impractical, well, for a human at least, armor of all kinds. Add to all that some fantastic interior designers, furniture makers and a great director of photography and there’s no way clients will be disappointed with all the eye candy on offer here. 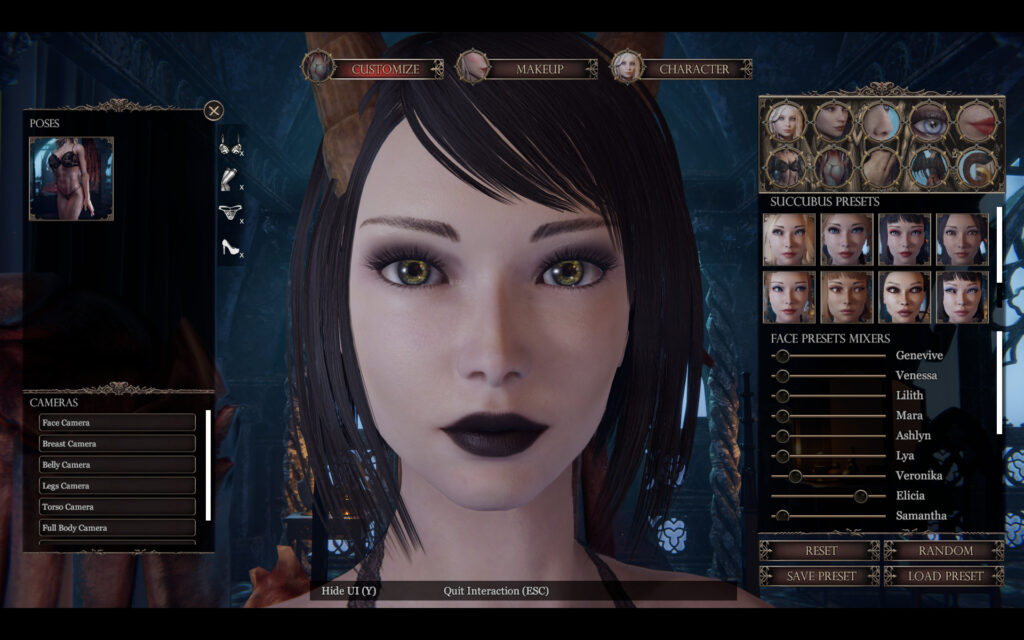 The photography chick deserves a special mention. The poses she comes up with are seriously on fire and she even listens to the clients and their inane demands or offers of posing help. Her lighting skills suck though, but she’s trying, and learning. Interior designers have a more hands-off approach and I’m free to do what I want, or listen to the client’s input, with all the exquisite furniture and dungeon devices.

What’S up with the Shoddy Instructors? and Spill Some Guts on the Combat and Gig Mechanics.

Besides their di…? Aaah, to hell with family friendly interviews. Anyway, they’re wet behind the ears, it doesn’t seem like they’ve gone through too many wars. Or they got their instructor licenses on the cheap online. I’ve heard some of my colleagues referencing the Dark Souls gig, but that’s an insult to it. The action exercises and training moves they’re putting me through just makes me go all stiff, janky and overzealous with swinging any dismembering implement they want me to swing that day. It feels awkward. And my movements feel off in combat, like I’m gliding around. I’m certainly not high on endorphins from joy and opioids don’t work on me anyway, but it all transfers to real hacking and slashing action terribly. Including the stamina mechanic. I mean, what the eff? I’m a minion of Hell, I don’t get tired that quickly. There’s gigantic room for improvements here. And for impaling the instructors on pikes and hiring new ones. 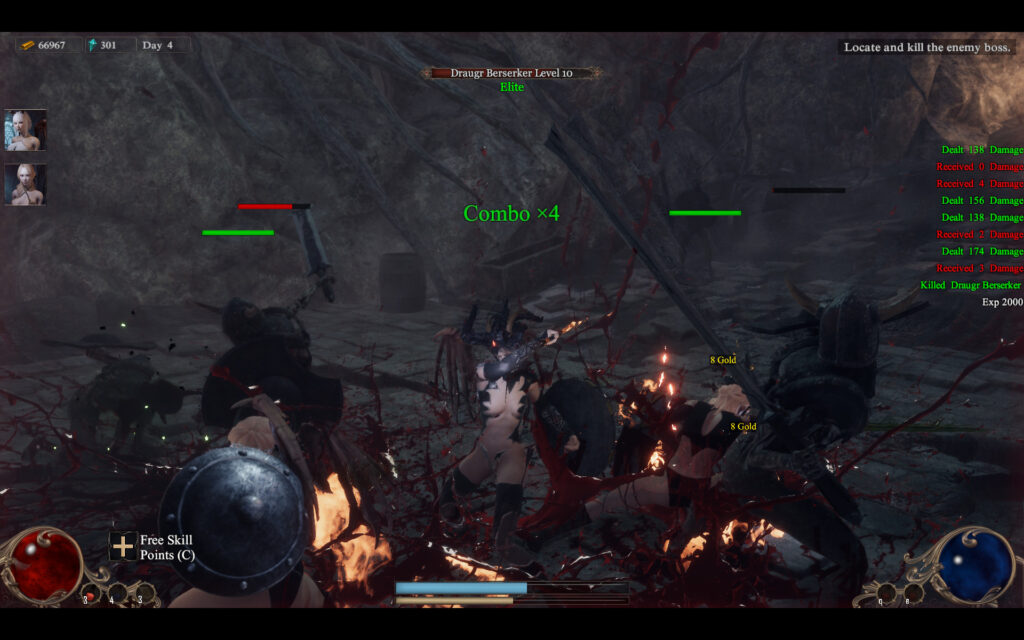 The combat arenas, if I can call them that, function as fixed areas. There’s no paths to them, we just warp in, mingle, disembowel and dissect whatever the population is, dance with the boss if there is one, pick up random loot drops and warp out. On occasion, the team fumbles a little, our masochistic streaks bubble to the surface, we take too much beating and succumb to pain. Pleasure. Both. In any case, we just wake up in the castle, slightly worse for wear, but still sparkly and glittery for the next day. Oh, if the clients wish, we can pretend we lost all the equipment in the arena scuffle. Don’t ask, certain types get off on that. I’ve also seen the interface from a client’s perspective, nothing not seen before and even slightly amateurish, but looks alright. Passable.

Loot is plentiful and it just pops out of the desiccated corpses and chests, as is usual for these types of gigs. My mind wanders to Diablo for comparison, but mostly because I wish my moronic agent got me that gig. You’ve heard of it, right? It’s legendary by now. The skills they teach us after we accrue enough experience also follow suit. The team can acquire multiple modifiers that influence arenas, like increased loot drops or accumulation of experience, and individual skills that influence our bodies, like health regeneration or iron skin. There are also, almost mandatory, character stats that can be improved. 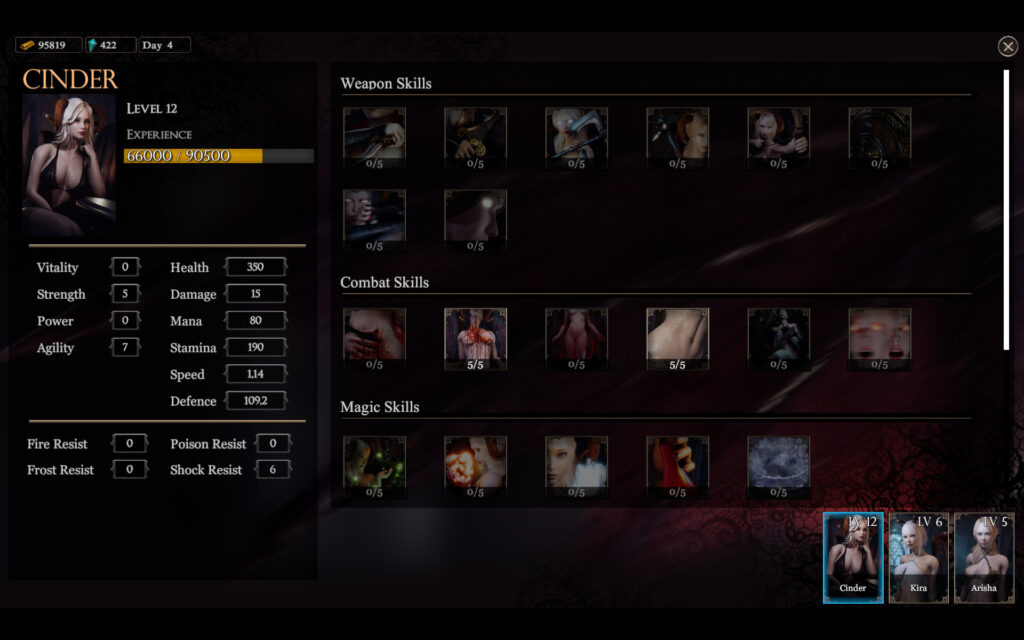 The minions they acquire for cannon fodder, even the bigger baddies that serve as arena bosses, are horrendously clumsy. We at least have instructors, of what little use they are, but they look and act like they’ve died minutes ago, dropped to Hell and were shoved into their first acting session without any explanations or proper guidance. Whoever’s casting them needs to get off his buttcheeks, pick up the slack and invest some time into educating the victims. Actors, I mean actors. 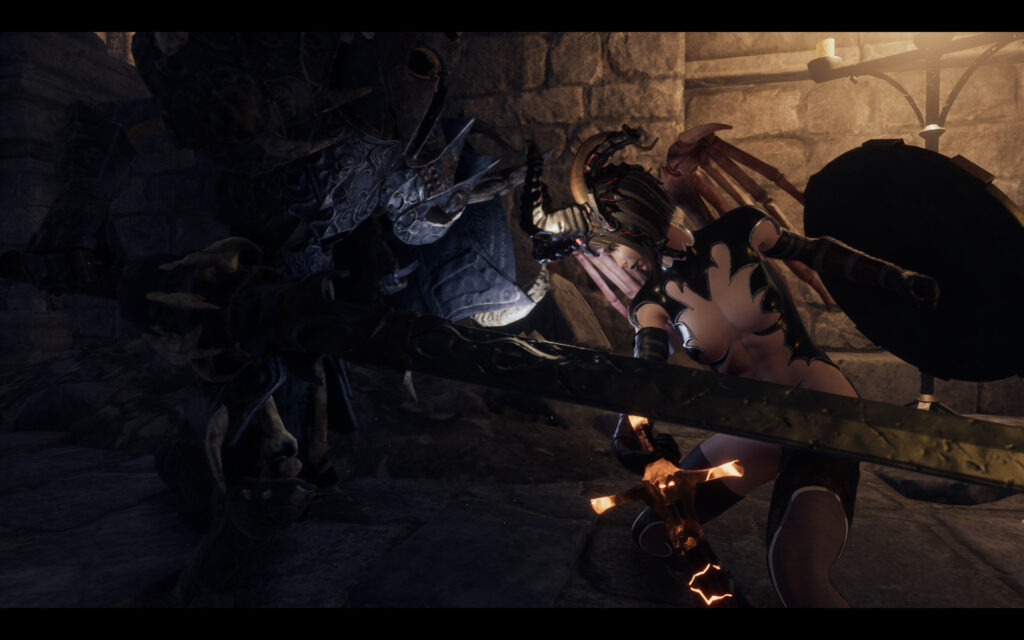 You’Ve Been Going on about This for a While, Cupcakes.

What? Oh, I zoned out, got bored out of my skull and automated my responses for the most part. What more can I say? There’s a couple of shops in the castle where I can spend gold we scraped from the arenas, for more items, potions, experience books and some other oddities. There’s even a special currency, called crystals, that unlocks additional castle space, furniture and lingerie items. But, we already get lingerie items as rewards for finishing the arenas and the crystals can accumulate with surprising speed, making them useless in the long run. There’s absolutely zero communication or meaningful interaction with my fellow succubi, or anyone else for that matter, we can just ogle each other or wipe the client’s drool from our bodies during downtime. 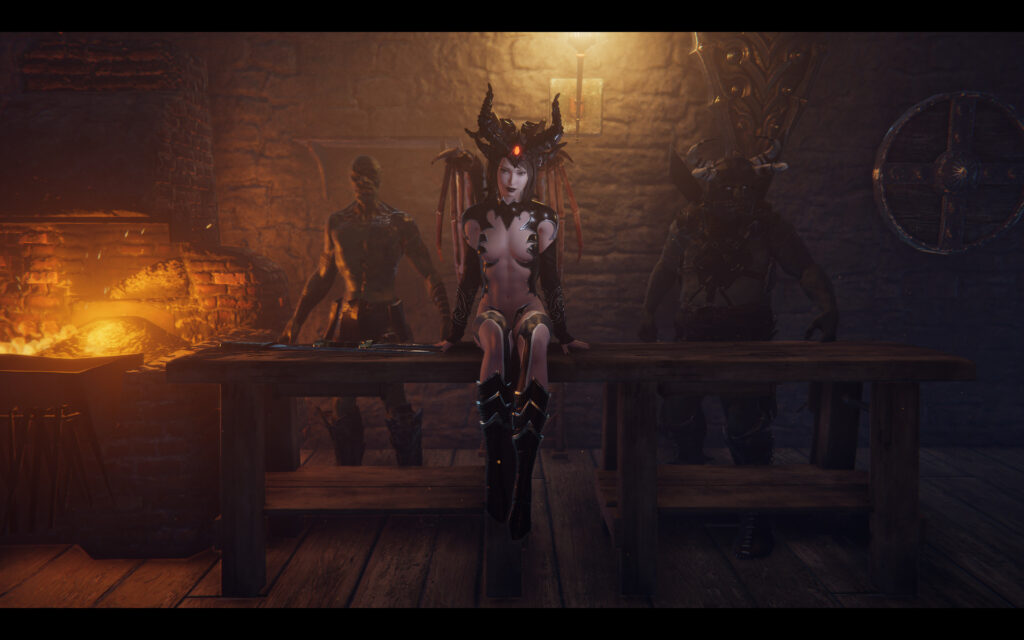 Yeah, This Has Been Going on Too Long. Any Closing Thoughts?

When you start scratching under the surface and peeling the skin, incidentally one of my favorite activities, it all starts to seem a bit superfluous. A sloppy witch’s brew of ideas mashed into mediocrity with a giant focus on what humans call erotica, there isn’t any straight porn here, that gets stale quickly and on its own isn’t good enough to hold the attention of most clients. It needs better combat instructors, slimming down of ideas, more castle variety, more item enchantments and a better casting manager. More things to do and some semblance of a story not written by the worst of the immeasurable hordes of imps from the first layer of Hell would also come in handy. At least the visual crew deserves to not get flayed alive and the makers haven’t given up on it yet. That’s something. Seriously, the zealousness of the makers is contagious. But, they keep adding stuff that’s not needed and just bloating the number of sets instead of properly fixing holes in the already built ones. Waste of money. But, hey, it’s their money. As long as I get paid, I don’t really care.

P.S. Oh, and One More Thing. What’s with the Gig Name?

I have no fricking clue! I feel like I’m the one getting punished. Oh, wait, I am. Sometimes. 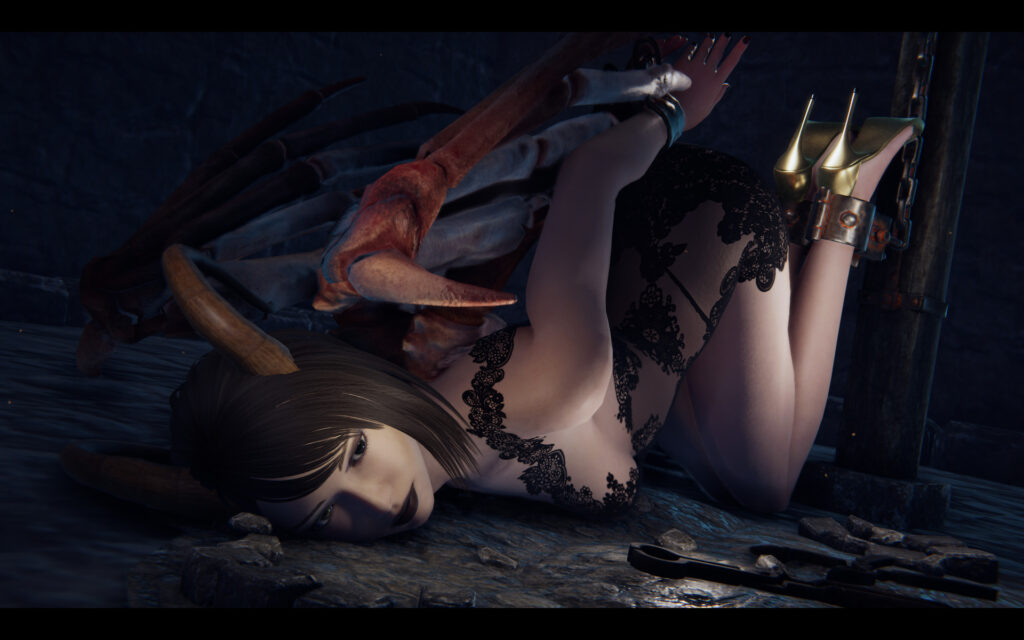