Explore a possible future of A.I technology being used for counselling and mental health in this visual novel.

‘Eliza’ is a visual novel game about a near future where mental health issues in population have spiralled out of control and an A.I program has been created for the purpose of providing a counselling service for people.

It’s a very interesting idea that can easily become a reality in our own world in the next decade or two. The game explores this concept from multiple perspectives by showing us how different people are affected. We play as Evelyn, a smart but highly introverted woman who had a part in creating this counselling software and who also decided to take up a role of one of the proxies – people who read out the script given by the A.I word-for-word so that the patient feels like they’re talking to a person rather than a computer. 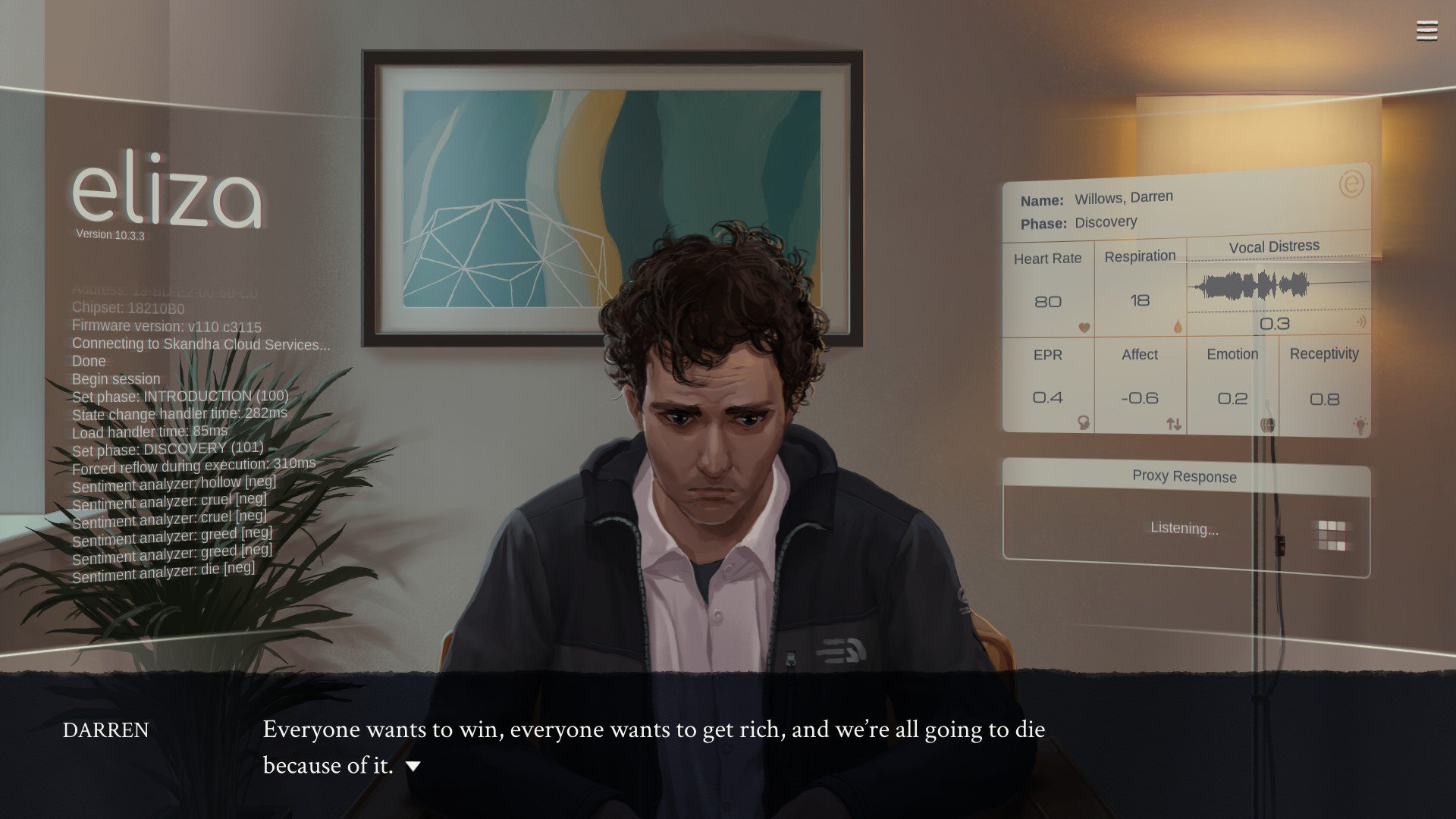 As well as the advantages and disadvantages of automation, the game’s plot also looks at a few other controversial issues, such as sharing and access to private data, and also the evolution of A.I to becoming more self-aware. The overall take on these ideas is quite mature and gets us to think about our own world, although it can feel a bit slow-paced at times. All of the characters are very ordinary people, so don’t be expecting anything over the top and heroic. The game does have multiple endings, all of which stem from a single decision at the end. I personally found them all to be pretty underwhelming, but perhaps the writers had to keep them within the realms of what’s believable. The overall story here is not meant to be epic and thrilling, but rather thought-provoking and reflective.

One thing that was a pretty nice touch was the option for us to check our character’s emails and chats and to learn some aspects of the lore and characters through that. 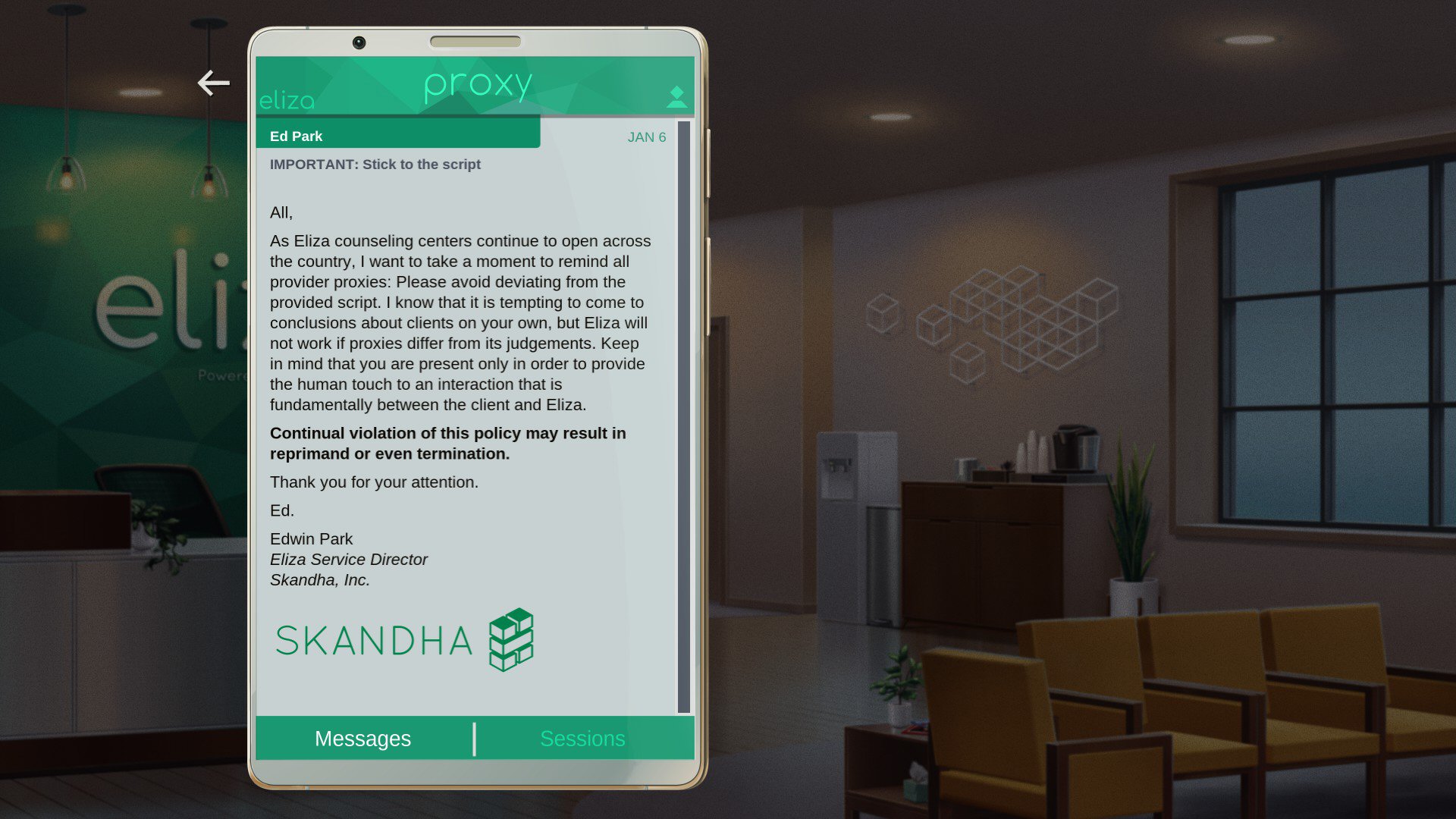 Since this is a visual novel, there are not many gameplay elements present here aside from simply choosing dialogue options during conversations and occasional interactions with the environment. The game takes us into different situations. By day, Evelyn works as a proxy at one of the offices where Eliza counselling happens, and by evening she tries to connect with friends, new and old, and to find meaning in her life. 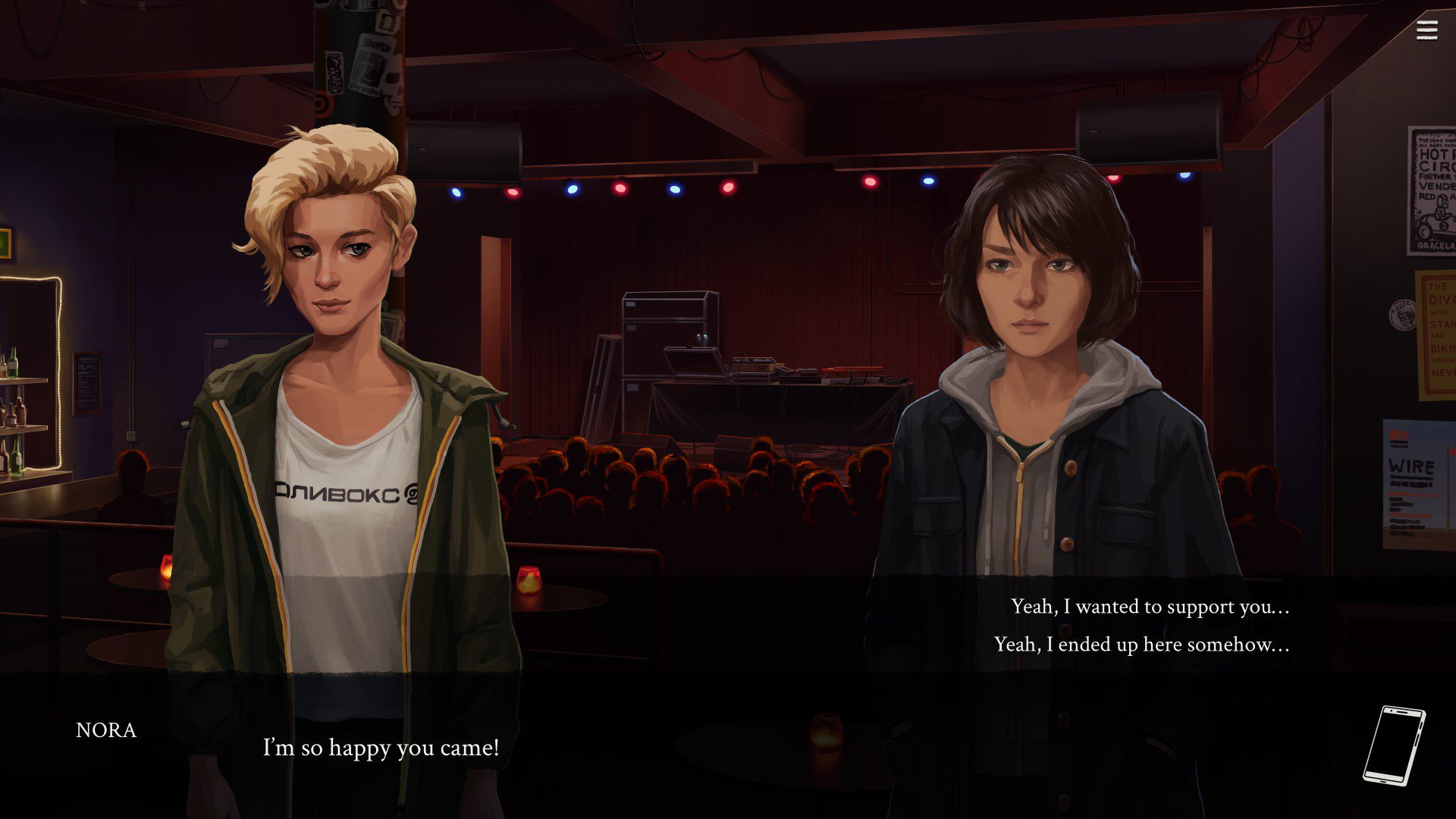 One thing that immediately jumped at me was the lack of dialogue choices when being a proxy. In the game’s setting, it was important for proxies to read what the A.I tells them to say word-for-word, or else they’d get told off. However, I feel it was a major missed opportunity not to let the player to have a choice whether to stick to the script or to deviate from it. The game only lets us do it near the end where it doesn’t really have strong repercussions anymore. I think it would’ve made it more satisfying for players to have these choices from the start and to face the repercussions of these choices, rather than simply clicking and watching the conversation play out without any agency in what is said. 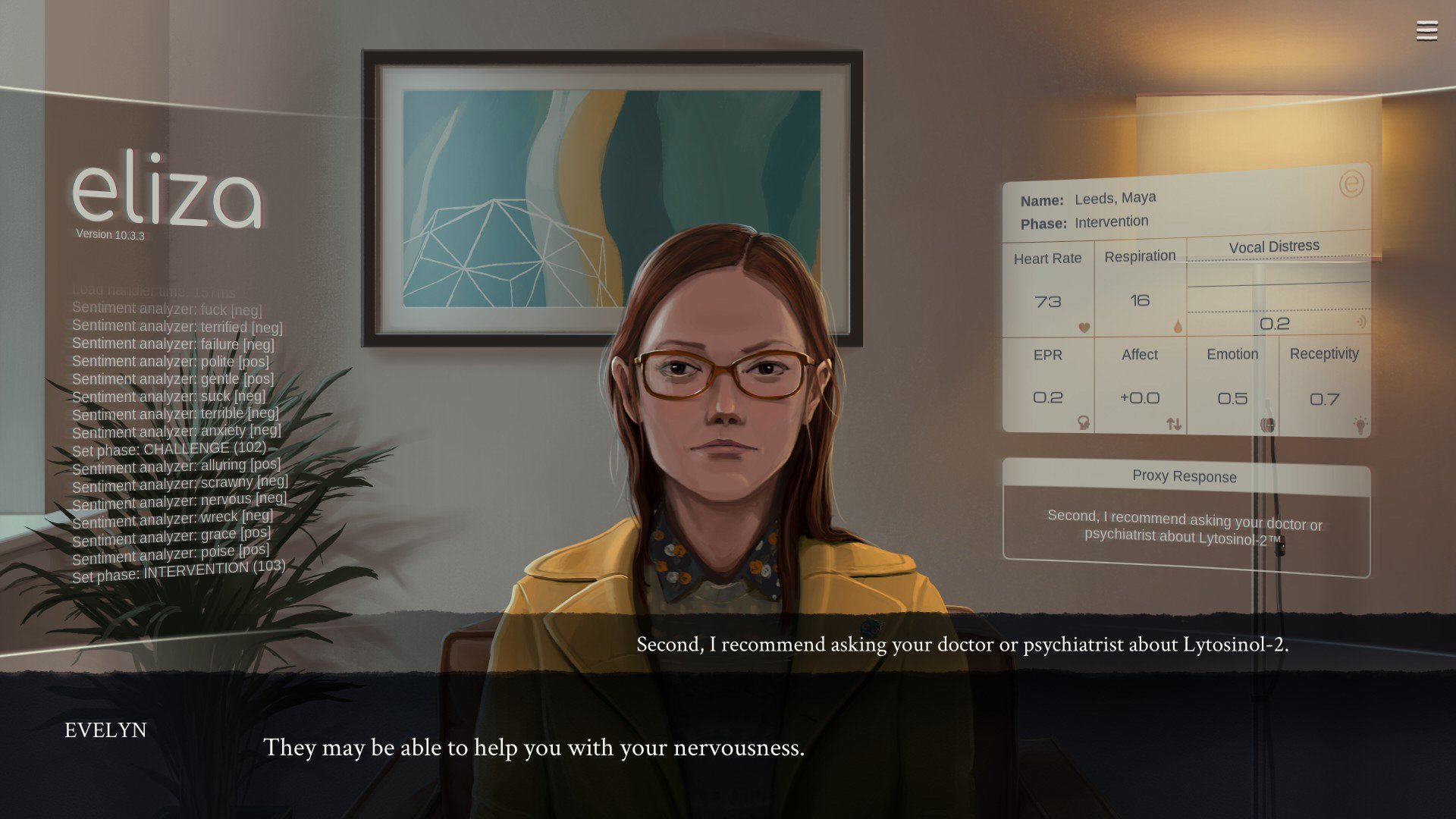 There are dialogue choices present during other scenes, like when we talk to friends and acquaintances, although most of them don’t seem to change much and the plot is still pretty linear and follows the same path. So, it’s a very casual game really.

There’s an optional Solitaire mini-game present too that we can play at any time. It’s closer actually to a Free Cell Solitaire than the classic one, but it uses completely atypical cards that need to be matched. 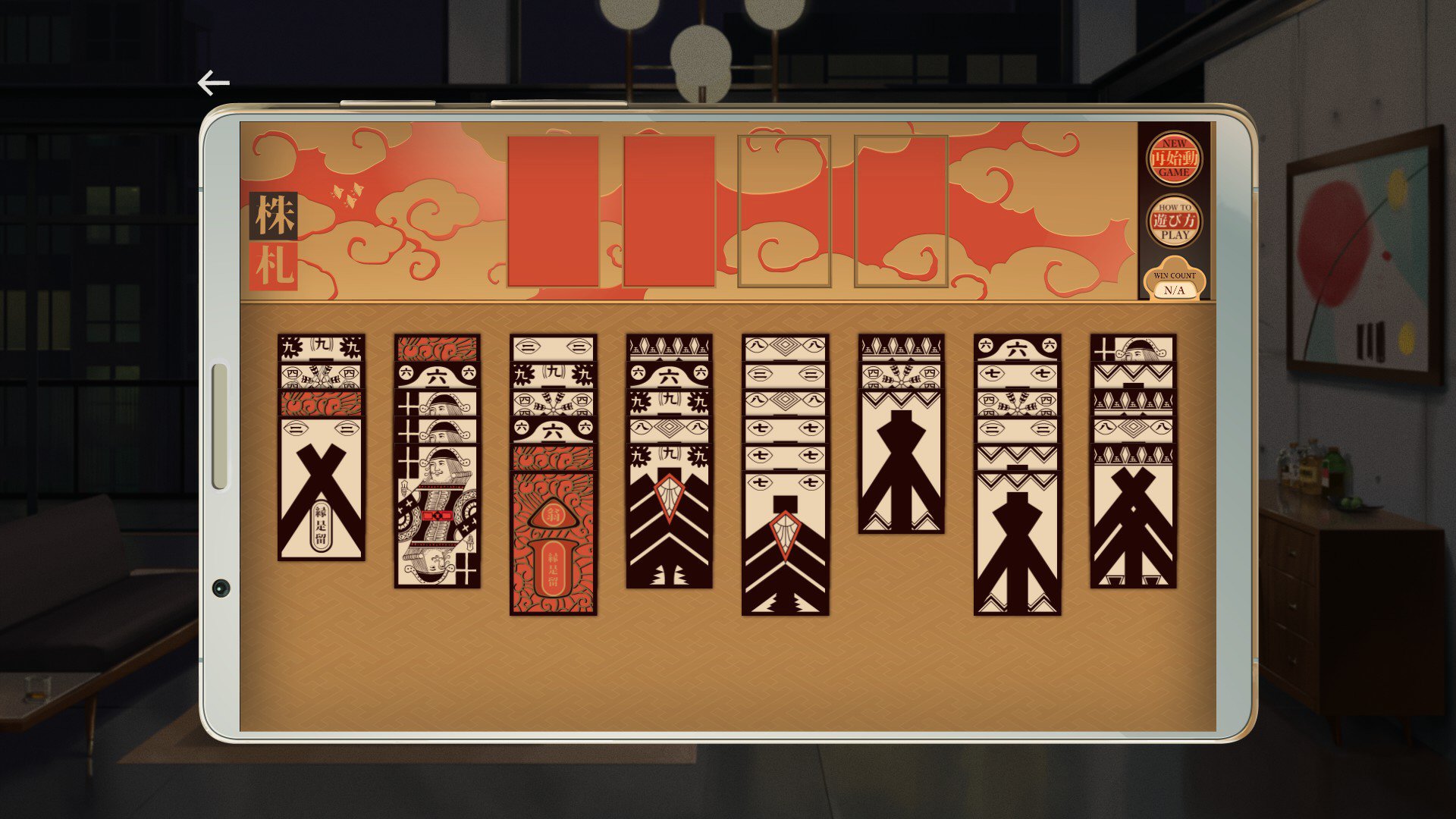 The game’s presentation style is akin to what is expected from visual novels. It uses very well-drawn character busts during dialogues and nice backgrounds too for each location we go to. The user interface is simplistic and easy to use. It’s a perfect fit for a casual game that you can jump onto straight away. 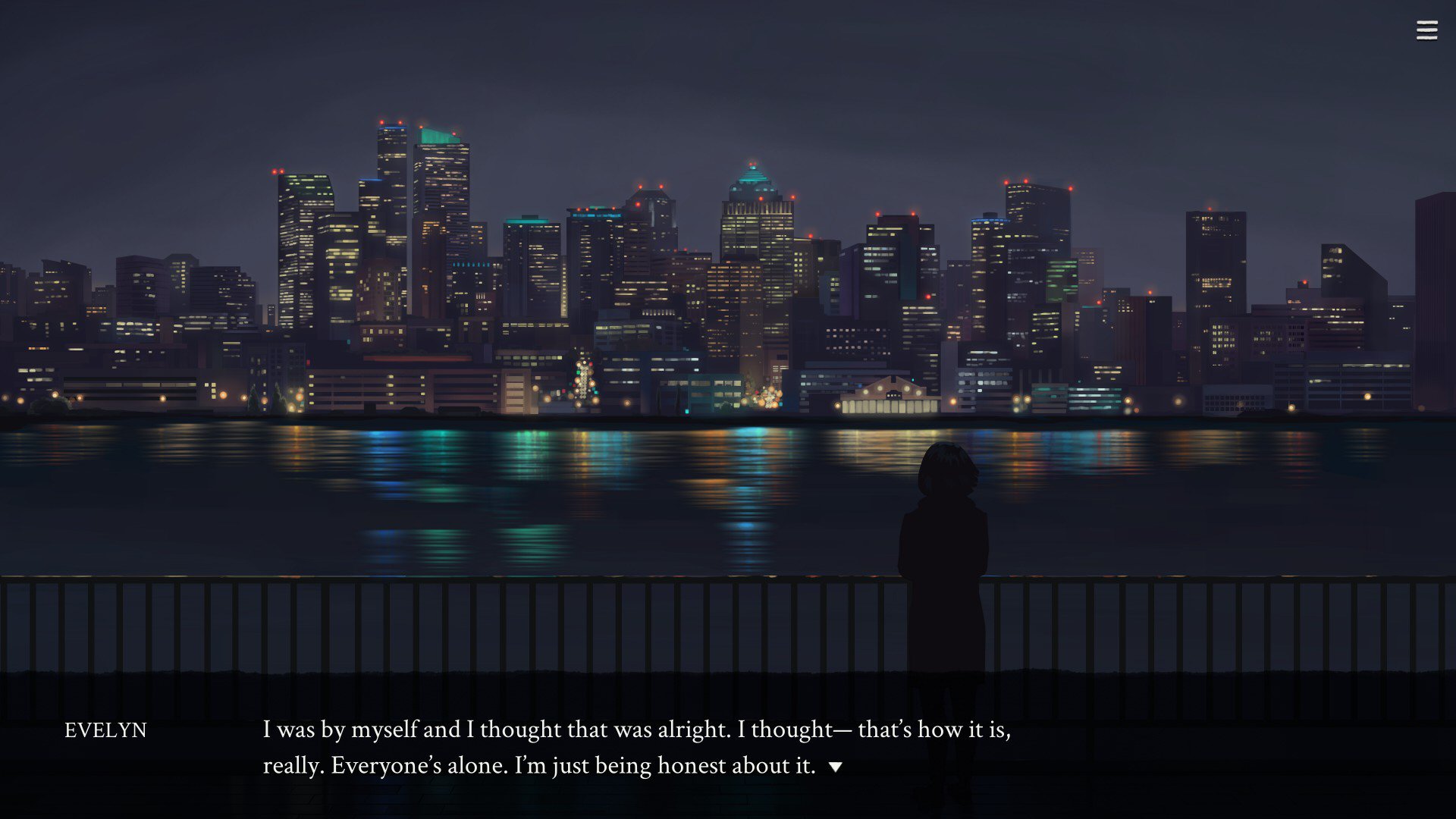 The music is ambient and decent, though doesn’t really stick out. There is also voice acting present for each line of dialogue (aside from character’s inner thoughts), which is done quite professionally and helps us to get a better feel of each character.

The game’s title menu also contains a chapter selection, so after completing the game we can return to any chapter we wish to replay. This is particularly useful if you want to try out each ending that is offered through a decision at the end.

Overall a decent story that tackles real issues that our society is going to be facing in a very near future and presents them in a mature and believable way. I can’t say the story is replayable exactly as it’s pretty linear and doesn’t have much of a branching narrative or deep gameplay mechanics. Would recommend to get it on a discount.