How did Nintendo not think of this?

Well this is a first for me! I certainly didn’t see myself reviewing anything but games, but looks like I got the surprise of reviewing a physical product (that isn’t a boardgame). One that could be helpful at that! And it is something that is called the Fixture S1. After having it a little bit over two weeks, it’s time to see how I felt about it

So what is the Fixture S1 exactly? Well, it’s a Switch accessory meant to let you play in handheld mode with a Pro Controller. For those of us that lean more towards playing the Switch with a controller than with the Joycons attached, I’m sure I’m not the only one that wished I didn’t need my Switch on the table (or on my legs) if I want to play with a controller. I’m also someone that doesn’t really play that much in TV Mode unless I really want to continue and not use the charging time as a break. So when I first heard about the Fixture S1 last month, I was intrigued, but skeptical. Nonetheless, I decided to try it out anyway. After all, if it is a good product, it’ll be something that I’ll be using for a long time. 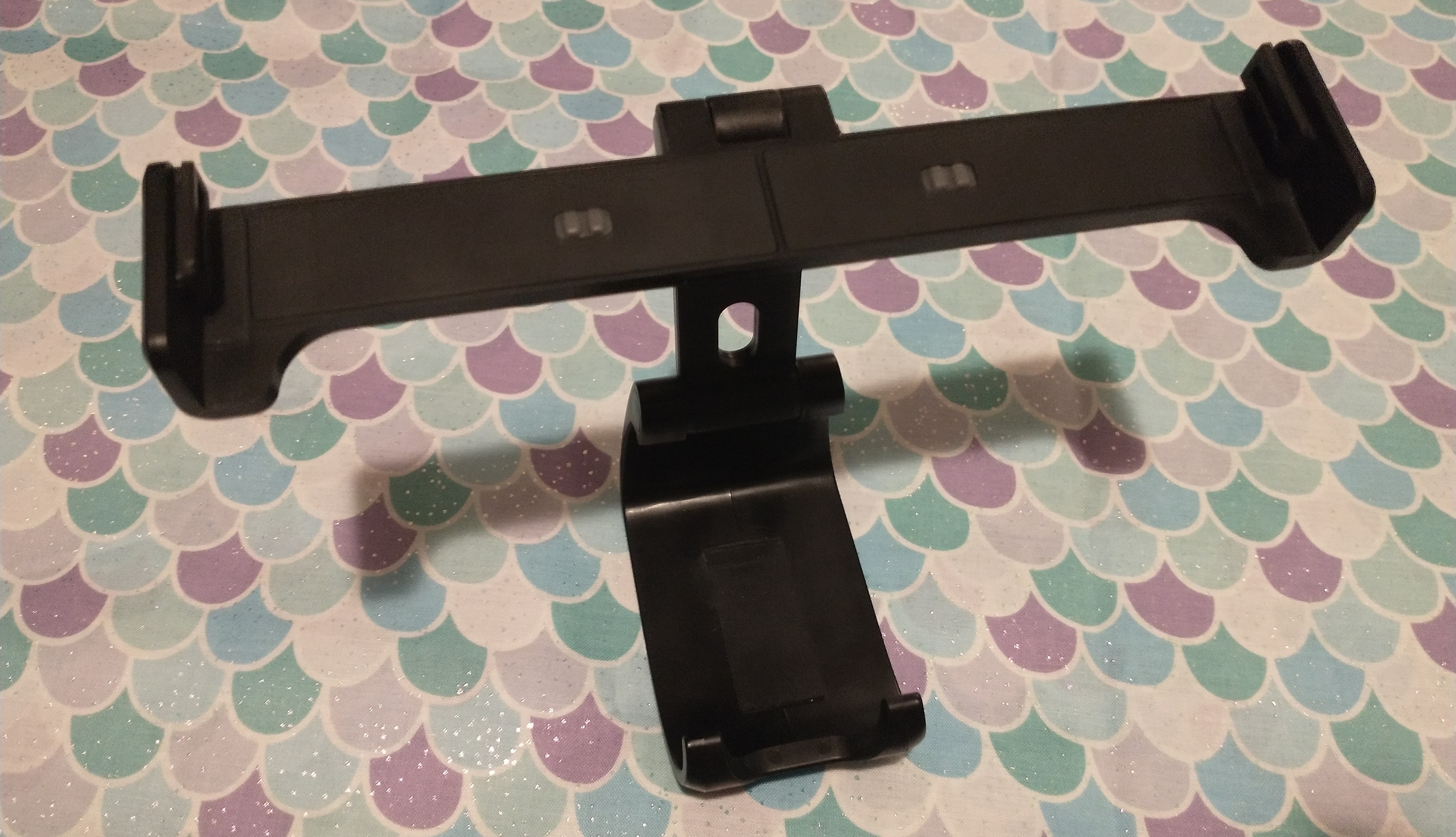 After waiting for a short time for the package to come in, I finally got it in my hands. I was excited to try this out, especially since this was at the start of my Pokemon Snap obsession. The Fixture S1 is actually pretty thick, with the joints for the pieces that move having resistance to them so nothing will easily budge when playing. Fully assembling it was more or less easy and felt really secure. It’s best to put in the Pro Controller in first, which is by having the top set into it first and than pushing the bottom into the base. Make sure it’s lined up in the center correctly (by looking at the back) before fully snapping it into place though. Once it’s in there, it’s in there. For the Switch, it’s actually locked in by using the Switch’s own rails system (which is pretty smart to do) so you just slide it in. It does feel it’s going to be too tight of a fit, but it does fit snuggly.

Once both are in, you can also adjust where the screen is to something that is more comfortable for you. With a product like this, it is going to be heavier than what the Switch or the controller by itself will be (and it’ll take a bit to get used to it), but adjusting the screen does help this out a bit. You have two ways you can adjust the screen. You have the arm so you can move the Switch away or towards you, with the hinge that keeps the arm attached the the Switch holder piece letting you adjust the screen up or down. 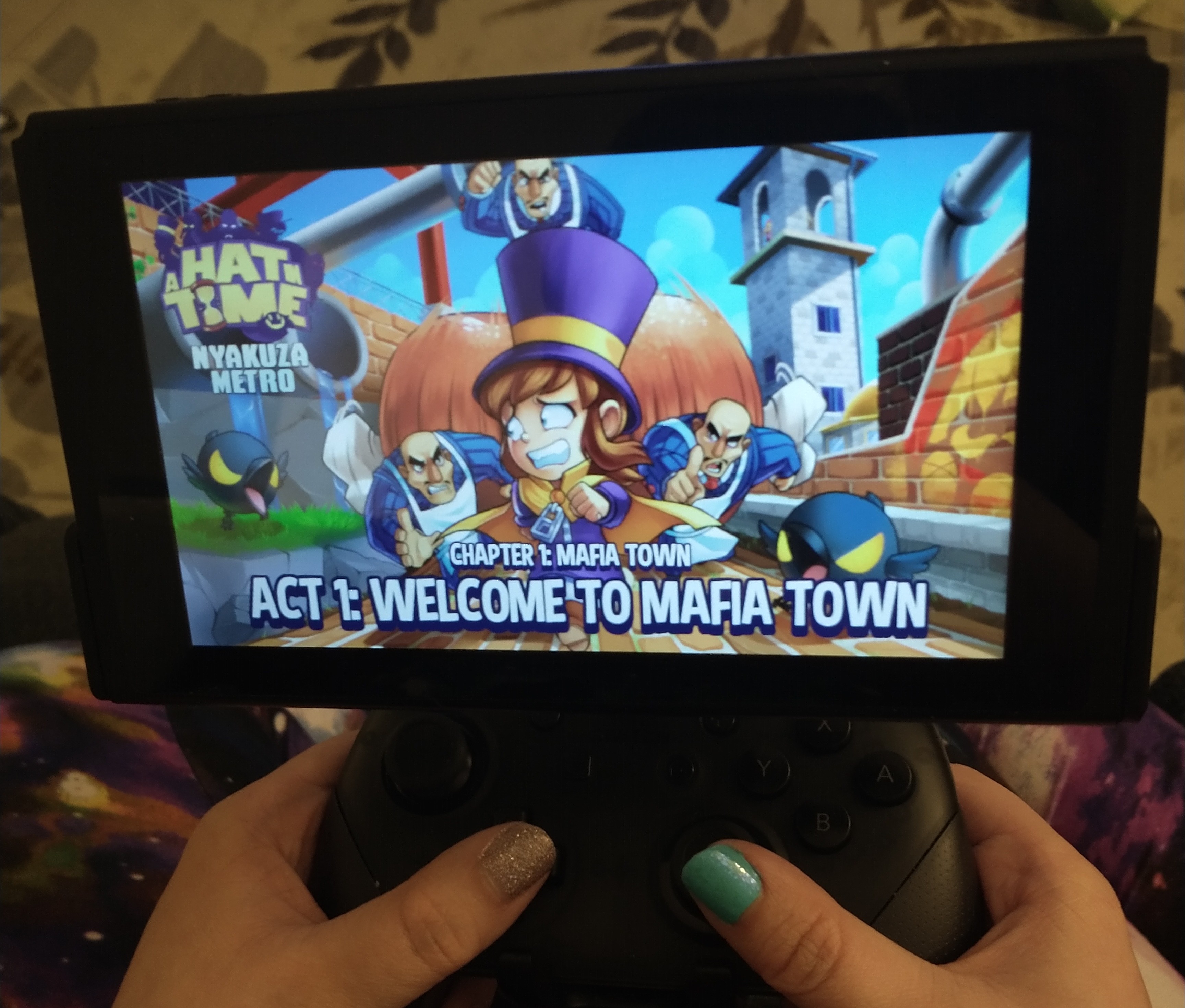 The rubber pieces on the piece that holds the Switch will also rub in some streaks into the back of your Switch, but it can be wiped off. For people that have special edition Switches, specifically ones with designs on the back, I do believe it’s going to be fine. I have the Animal Crossing edition Switch and I attached it to the Fixture S1 and it didn’t seem to harm the design. So I wouldn’t worry too much about this aspect, but if you rather not take this risk, I understand. Though, this kind of thing seems to be on par with other accessories that aim to have the Switch secure. Not to mention any other products, though granted I don’t use this anymore, but I have the first design of the Satisfye grip and it did leave some black streaks on my Joycons. As far as I could tell in the two weeks I had the Fixture S1, there has been no actual damage to the Switch. 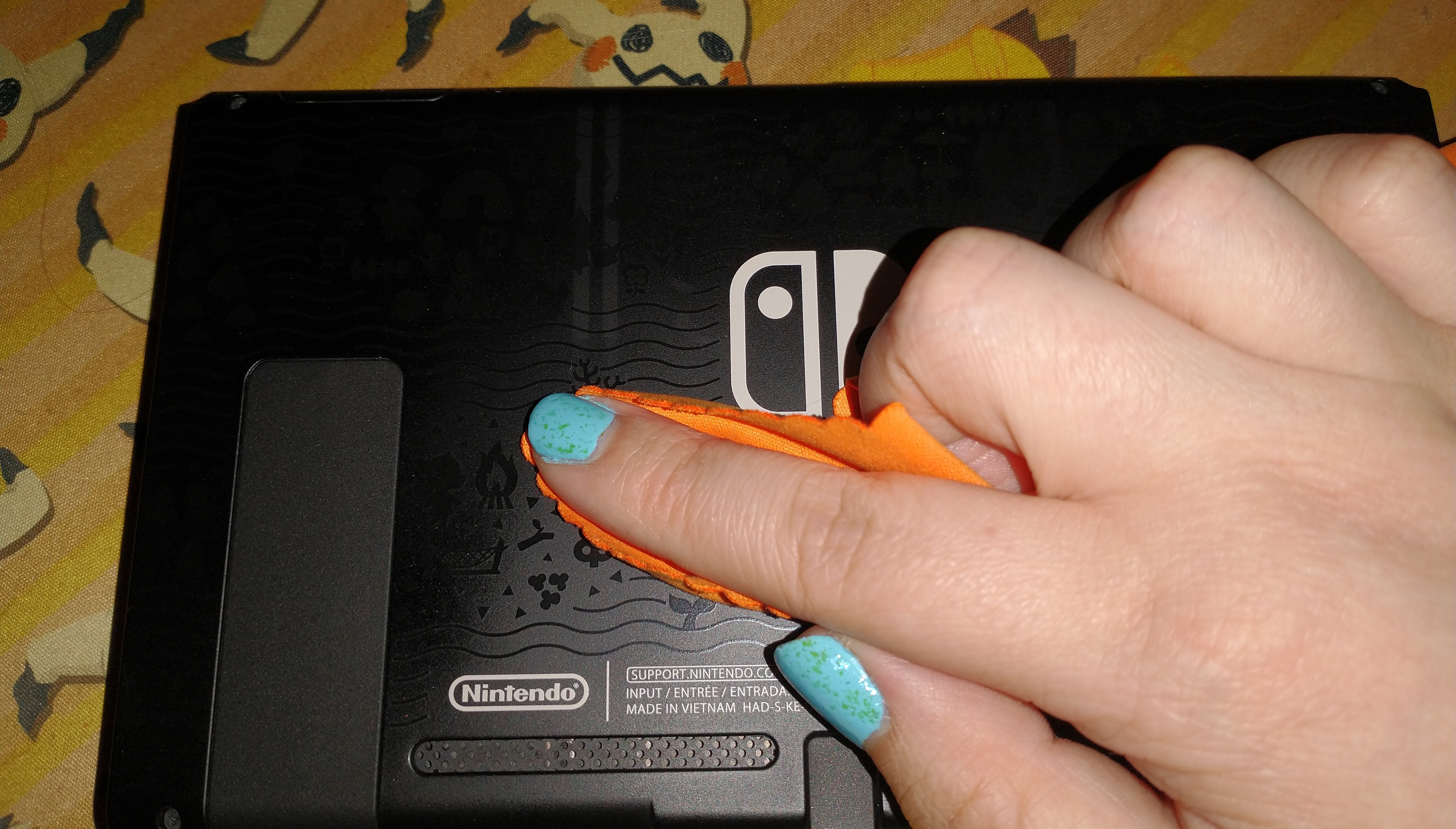 The design of the bottom of the Fixture S1, where the controller is put in, can also be used as a stand both with or without a Pro Controller attached. I was mainly interested in the main feature of the Fixture S1, as I do already have my own Switch Stand (AC themed obviously), but this is another pro if you want it on a table for any reason. Also, it doesn’t have the risk of the stand folding in on itself with the Switch on it if you nudge it the wrong way.

The Fixture S1 is very open with this only fitting the official Nintendo Pro Controller, which is understandable. Though, this will be an extra cost added on if you don’t already have one. Or if you thought you did have a Pro Controller only to find out that the cute Zelda design one you have is actually not from Nintendo but is just officially licensed. And I have to say, yeah this does not fit any other third party controller. I was trying to fit in the PowerA controller I had (which at the time, I didn’t know was a PowerA controller, embarrassing I know) and it didn’t fit (though it did scratch off some of the design). So I did have to go and buy an actual Pro Controller.

With that said, this does have a high chance at scratching the controller, which I believe happens when you try to get it out. This does have the benefit of knowing that the controller is securely in there and it probably will take a lot for this to break, but the sharp contact points that’s holding the controller can scrape against it when you’re trying to take it out. It may just be a combination of me being weak bones and worried about breaking the Fixture S1, but I do have a difficult time taking the controller out. It does take a lot of force (well, for me) to push the two away to get the Pro Controller out and in that process you can cause these point to scrape against the controller. Considering I was using a brand new Pro Controller, it was a real bummer that it quickly got scratched up due to this. So if you don’t want your controller to be scratched or have a limited edition Pro Controller, I wouldn’t be putting it in the Fixture S1.

This also (obviously) won’t work for those that have a Switch Lite. This uses the Switch’s own rail to lock it in place and that’s only present on the regular Switch models.

Oh, I also gave it the ‘ole exercise bike test for fun. As you expect, it passes. It was even easier to mount my exercise bike as I could just keep one hand on the controller without putting it down (and struggling to pick it up without falling or having to get back off) and doesn’t make me sweat as I try not to risk dropping the Switch onto any part of the exercise bike if I didn’t set it down. 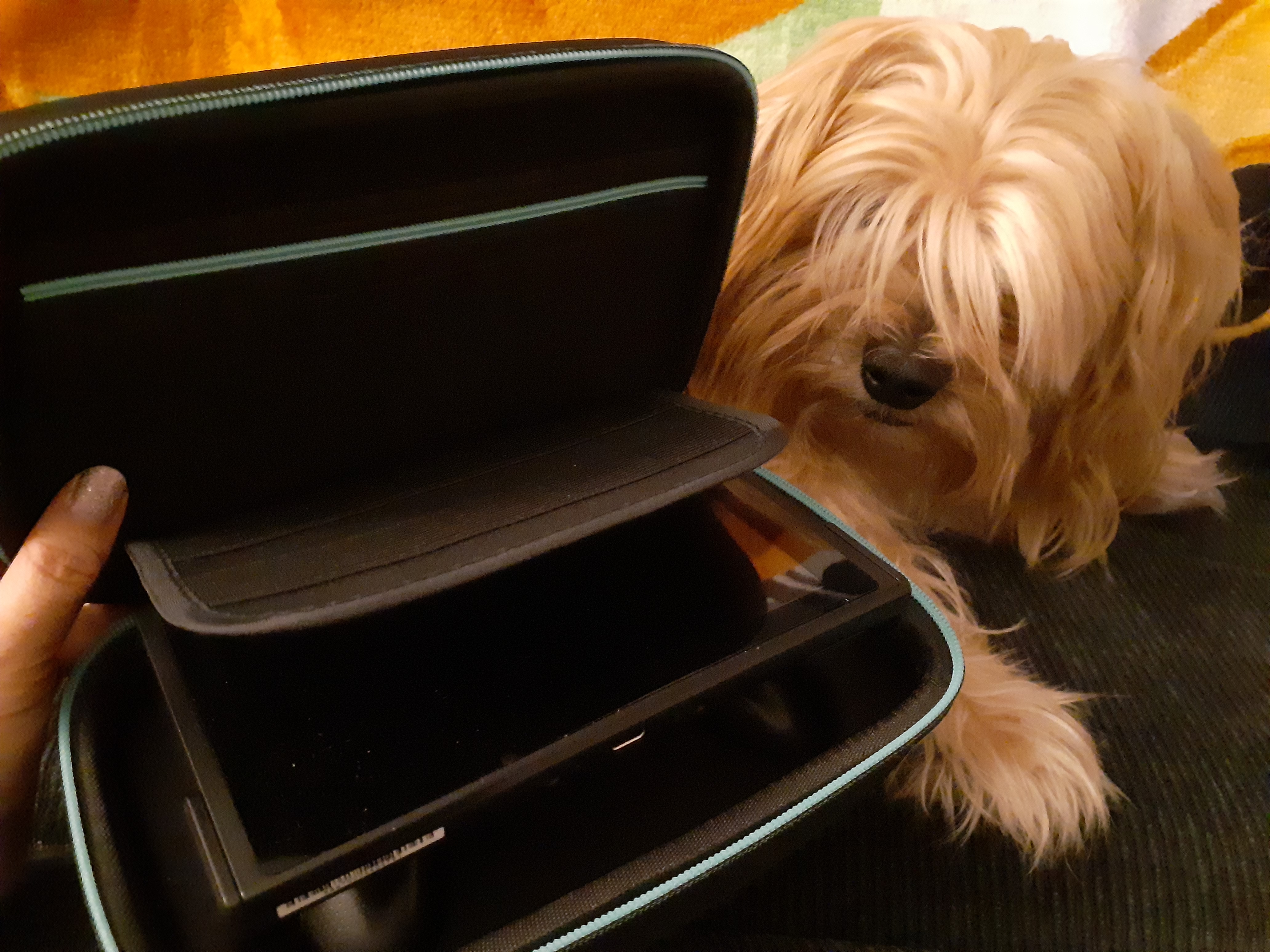 I was also able to receive a carrying case meant specifically for the Fixture S1 so if you don’t want to disassemble it before you leave, you can just plop it in the case. Well, after you position the Switch flat against the controller. The case itself seems pretty protective. I’m not about to put my Switch at risk here, but the case is a hard case and pretty thick as well (it doesn’t seem like it would be, but it is). The Switch itself isn’t actually flush against the top, but more in the middle area. The rest of the space is actually used for the pocket that’s located at the top, which gives it a whole lot of room that I thought. I’m used to the small amount of room that you get with DS carrying cases. You can actually put your Joycons here if you want (which probably is a good idea just in case you forget to charge your controller) or to put your own cartridge holder in it (or both). If you are intending to bring your Switch out and about and you want your Fixture S1 to come along, this carrying case is great. Just make sure you open the case with the logo facing up so it doesn’t come out upside down.

The only nitpick I have is that the cartridge pocket, that doubles as having some fabric on top of the Switch screen, is kind of awkward. At least, that’s what it feels to me.

If there is any indication of whether I recommend the Fixture S1 or not, it has to be that I haven’t taken it out of the unit, unless I had to, ever since I received it. Other than when I want to get my screenshots or was doing a Ring Fit Adventure session, it was always in the Fixture S1. It really is a great product, despite some negatives, and I don’t see myself throwing it in the corner to forget about it like another Switch accessory that I have. If you’re someone like me that loves playing your Switch games with a Pro Controller more than your Joycons, the Fixture S1 is definitely worth it. With the carrying case being worth it if you want to take it with you when you travel or know you’re in for a long wait.

And honestly, I most likely would have picked this up if I knew about the Fixture S1 before. Like I said earlier, I’m always looking for stuff like this and I do love playing Switch games with the Pro Controller in and out of TV Mode.