A short but sweet day in the life of a young girl.

Sumire is a short narrative game that plays like an interactive storybook enriched with various gaming elements. If you are looking to pick your brains through puzzles or a very long experience, this is not for you. However, if the screenshots caught your attention and you want to get immersed in this beautifully painted world, please read on.

Sumire is about spending a very special day in the life of, well, the titular Sumire, a Japanese girl experiencing the transition phase between childhood and adolescence. She just lost the only stable anchor of her life: her grandmother. Everything is changing around her, and her relationships with others are getting complicated. So far, she has been putting a lid on her feelings, and she prefers to leaves things unsaid. And then, suddenly, a magical flower appears, claiming that he only has one day to live and he would like to see Sumire take that day to accomplish all that she wishes for. The time constraint pushes her out of the comfort zone of her isolated home atop the hill, and she will interact with the local wildlife as well as the residents of the nearby city. The player’s choices will take Sumire’s day in several possible directions. 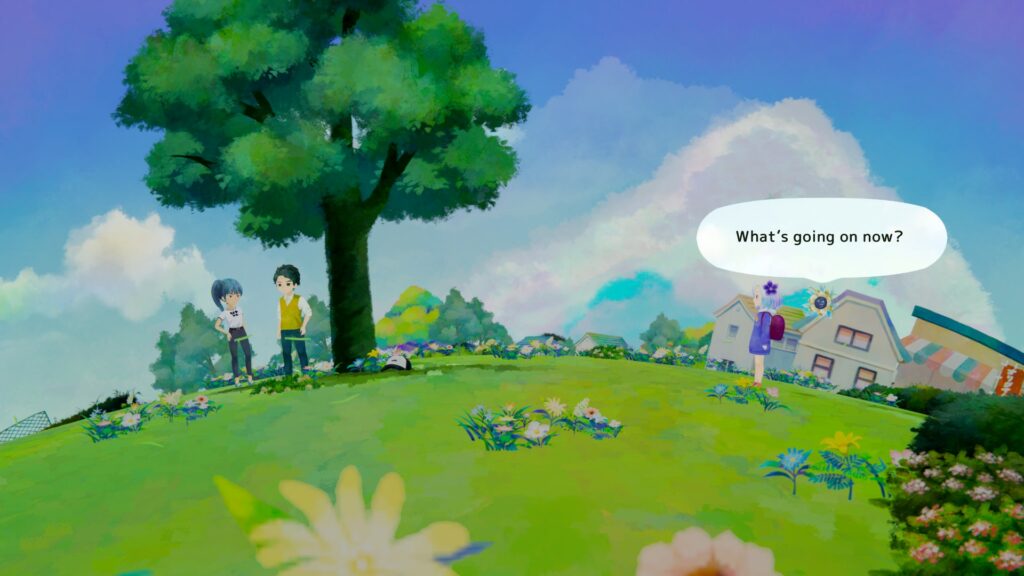 Our main character is moved with WASD or a controller’s left stick rather than pointing and clicking. It is immediately apparent that although the screen scrolls left or right like a platformer, it is also possible to slightly explore depth to move closer or farther away from the camera: the world is a 3D environment, and it is used for great visual effects. The curvature of the edges feels like a tiny round earth, and some sequences are about moving toward the depth of the screen rather than sidescrolling. The result is gorgeous. Combined with the painted backgrounds and sprites, Sumire’s world is absolutely delightful to explore. Some of my screenshots have already been selected as my new Windows wallpaper! Despite how short the game is, it is full of variety. There are quests to accomplish for other characters, and also several mini-games that range from avoiding evil crows to playing a card game. The quests are never difficult to accomplish, but the way you talk to the characters or the way you solve problems will impact Sumire’s karma and change small events or even the ending. 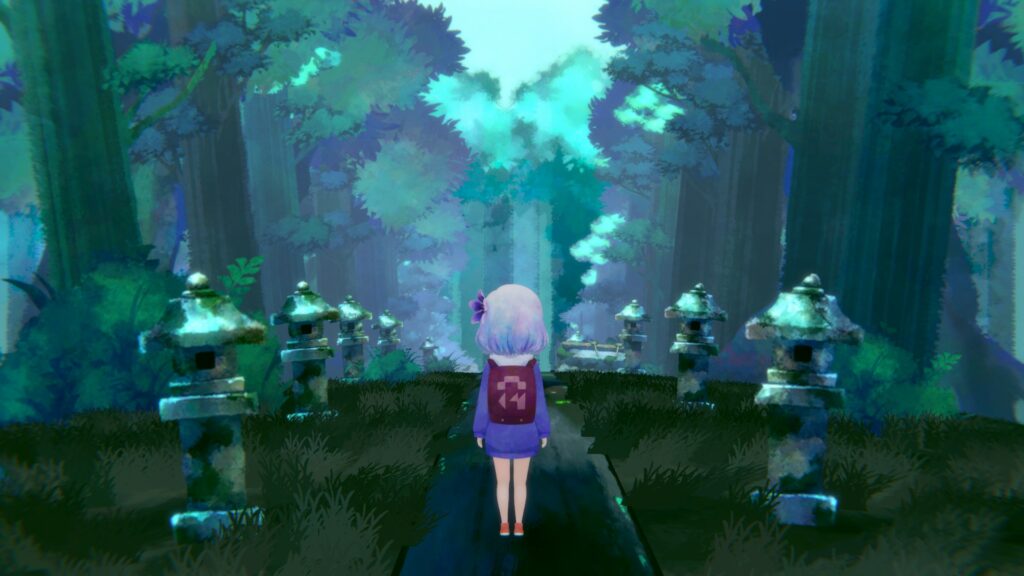 Heart of Gold, Heart of Darkness

The heart of the game is in Sumire’s dialogues and interactions with others. She tends to be very assertive with non-humans and extremely shy with other human beings, but the player can influence her behavior. For example, Sumire can confront people or not, she can forgive or get revenge, and so on. Her body language, her way to express herself, as well as the idiosyncrasies of the Japanese language translated into English, made her a very cute and compelling character. She is so well written that I was looking forward to every single line of dialogue… and this is coming from someone who usually doesn’t care about stories in video games and frowns at cutscenes. I even played the game twice, once with positive karma and once with negative karma. My first run took between 2 to 3 hours. I am still considering a third run to change a few interactions, that is how rich the game is despite its apparent simplicity. 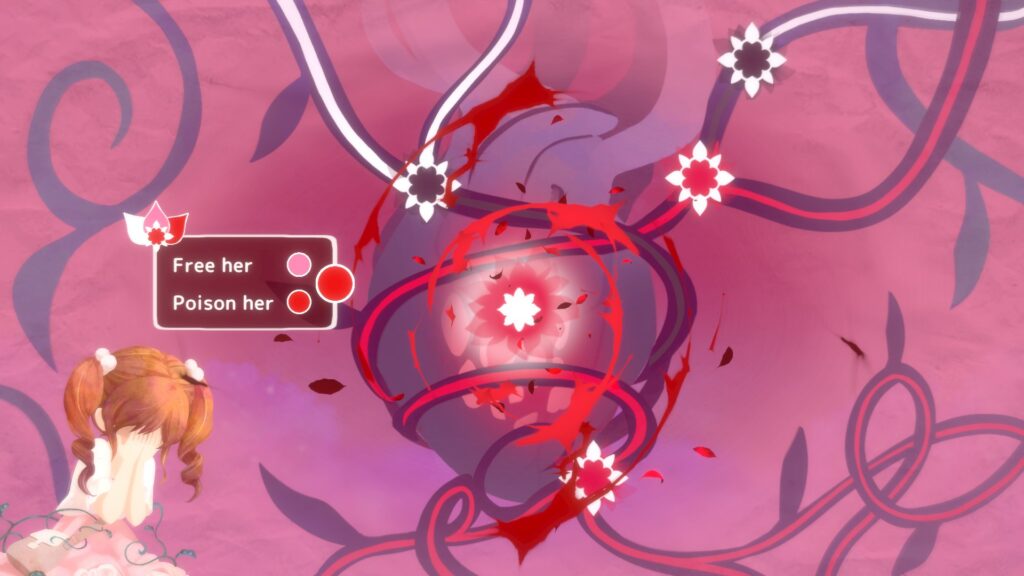 Notwithstanding my comment about changing interactions, the overall structure of the game is quite linear, as specific cutscenes are necessary to move to new locations, and the next step is always made obvious. You won’t get lost or left clueless about a puzzle. Yet, you have enough freedom in your actions not to feel constrained by a linear adventure: the developers at GameTomo Team struck a nice balance. There is also a fine balance between magic/fantasy creatures and the humans in Sumire’s life, both impacting each other subtly and gracefully. If I had to find one single nitpick, I would say that one of the songs that played in the background with acoustic guitars was repetitive. That’s truly all I can find to complain about… 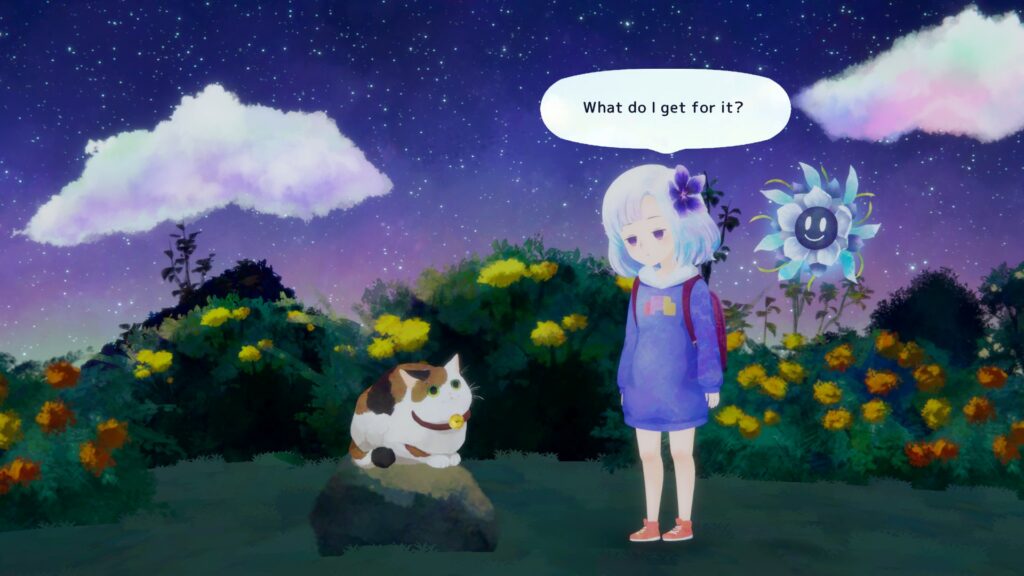 Navigating Sumire’s gorgeous painted world and the changes in her life left me utterly charmed. This game is short and simple, and yet it offers richness in terms of gameplay with a soft blend of 2D and 3D, as well as a variety of minigames and situations that offer multiple outcomes. This game is like an enhanced storybook, combining the best of both worlds: an enchanting story, gorgeous pictures, great writing, interactivity, and player choice. If you like the screenshots and you don’t mind playing as a little girl within a game that is both short and easy, I heartily recommend Sumire. You might even find it touching.