Despite cutting-edge visuals and some exciting gameplay mechanics, ultimately Biomutant proves to be a mediocre title due to huge amounts of content bloating, boring story and balance problems.

Biomutant is a third-person Action RPG set in a post-apocalyptic future Earth, where mankind has gone extinct due to a massive ecological catastrophe. Sentient life however continues to exist, thanks to a new species of mutated animals that now populates the land. As one of them, the protagonist has to choose his own path across the world, destined to change the balance of things forever.

Exceptional visuals, paired with top-notch art direction.
Visually, this game is extraordinary, and not only because of the cutting-edge technologies used. The art direction itself manages to depict an original post-apocalyptic setting that is colorful and vibrant, instead of faded-out and depressing. Rich in detail and nuances for the attentive observer, the vast world is consistent in design and offers solid location variety.

Enjoyable crafting / gear modding systems.
Disassembling, reinforcing and mix-matching gear parts is fun and interesting throughout the game. The overall not-so-great diversity of arms types is compensated decently by the possible combinations, which eventually enable creating the perfect weapon roster for any playstyle.

Good build diversity possibilities, to accommodate various playstyles.
Each starting class has several unique passive perks that can define a build. Some of them are more tank-oriented, others best suited for raw DPS. The combination of attributes, passive perks and gear opens up to a good number of play-styles, such as fragile but powerful Psi “mages”, agile sharpshooters or durable melee fighters. 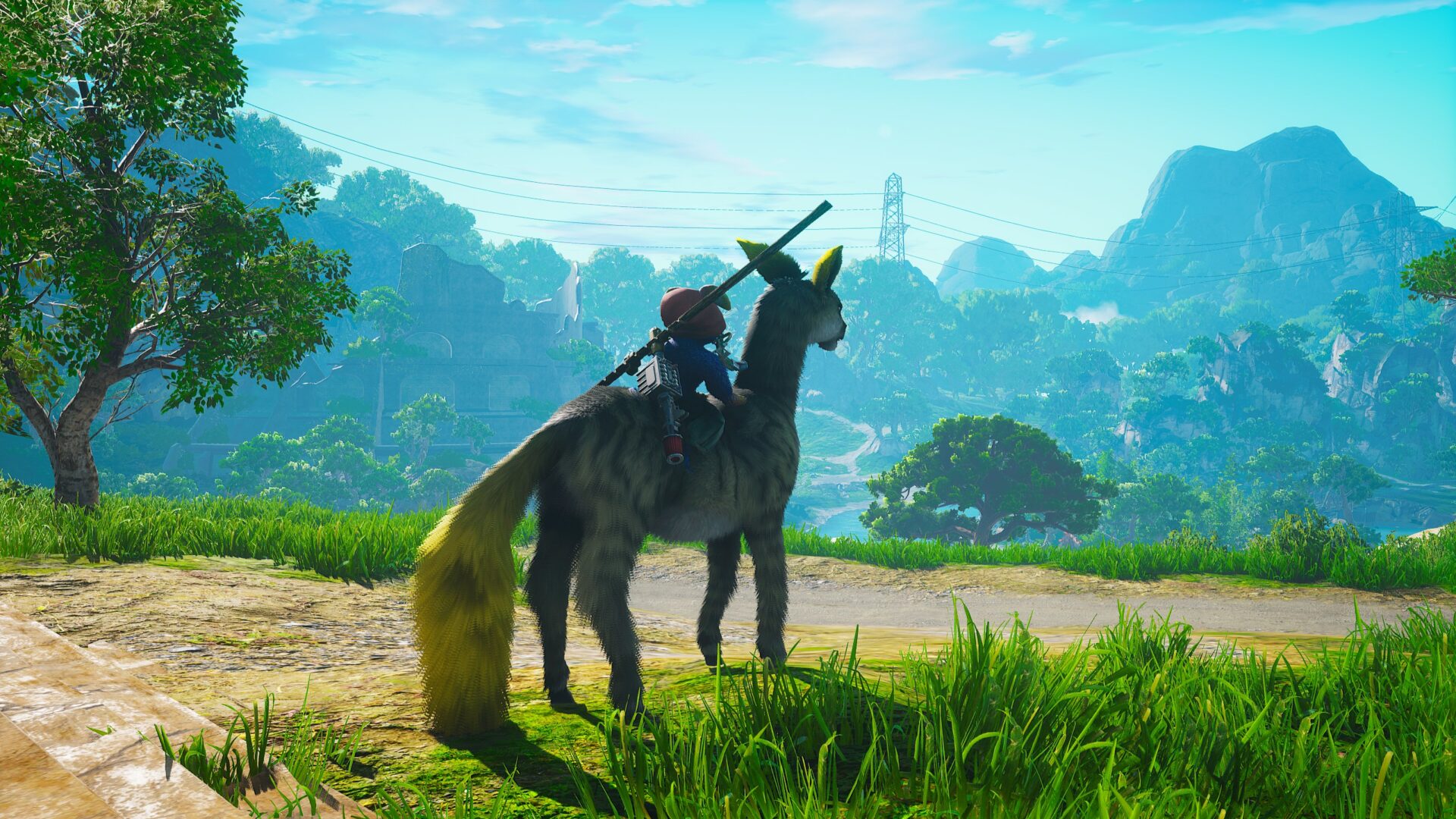 Underwhelming, clichéd story encompassed by forgettable characters.
The overly-used “bad guy killed my family so now I become a warrior” trope is used yet again, to lead a forgettable story that desperately wants to emphasize player choice without succeeding, with a contour of anonymous, bland characters as cast. The choice of ALWAYS using the same third-person narrator for everything, demolishes any flair characters may have had.

Enormous amounts of recycled, bloated content.
Initially, questing and exploring while battling various abominations and fellow (bio)mutants is interesting enough – after some hours however bosses, dungeons, puzzles and quest types start to be always the same, just re-skinned or outright copy-pasted. A wonderful world… filled with utterly repetitive, boring tasks over and over again.

Several issues with the combat system.
The lack of proper enemy-lock on, in favor of a weird “auto-lock” system that in many cases ends up making players attack the wrong enemy, is very frustrating. Unlimited ammo paired with plentiful stamina, mean ANY fight can be won by spamming ranged weapons while dodging in a circle – YES, really! Hitboxes and collisions are floaty, while the general feel of “eurojank” permeates most fights.

Progression pacing is unbalanced, compared to the world’s size.
At around 20 hours in, top-tier gear, weapons and equipment will generally be acquired. Unfortunately, the entirety of the world takes quite a lot more than that to be cleared. This translates into players already having unlocked most abilities and the best gear relatively early, having nothing to look forward to anymore in terms of progression – still huge amounts of filler and quests to clear.

Very limited quest choices in most cases: weak role-play component.
Except for the main quest itself, most side-missions have very little to no choice at all in most cases. For example, an evil character cannot choose to kill a secondary character to steal something he needs from him – he will still have to do a “helping quest” just in the same way as if he actually offered to help. On top of that, there can be major inconsistencies between the lore and what actually happens in some situations. 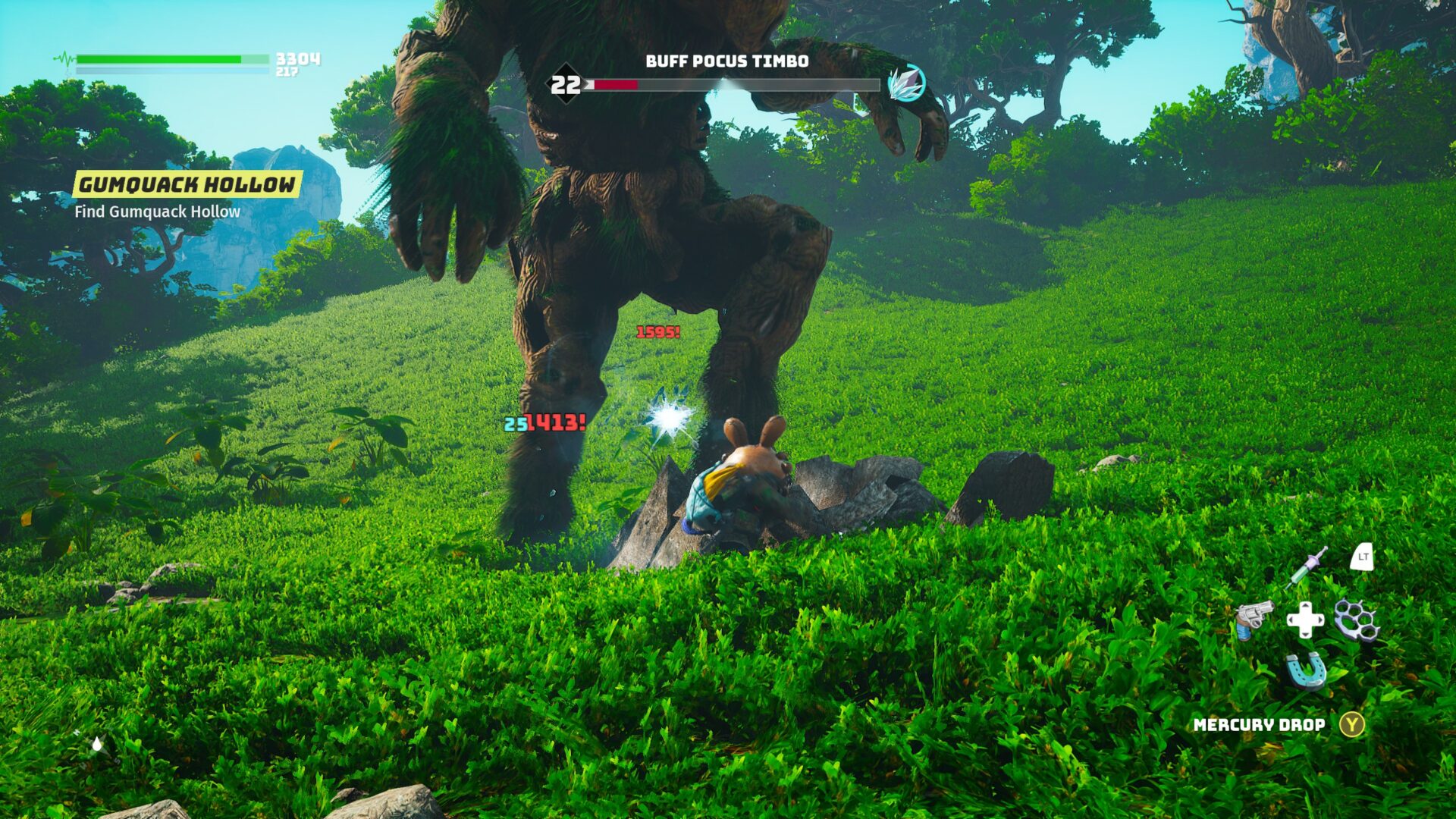 Exploration
Is performed on foot, on mounts when available and also by using several vehicles in specific biomes (such as a jet-ski to traverse watery areas). Fast-travel is available between discovered and “tagged” banners outside of combat, although not while in enclosed spaces. The world is vast, and has many optional areas, secret loot containers and places to discover. Attentively scouting every ruin in search of containers is recommended, to acquire vital consumables and better loot.

Combat
Plays out in a fast-paced manner, either in melee or using ranged abilities such as various gun types, psi skills or organic mutations, which all need “Ki Energy” (Stamina) to be activated. Melee on the other hand, doesn’t consume stamina whatsoever. Depending on character attributes such as strength, intelligence and so on, the damage dealt with a specific offensive means can greatly improve – passive class-specific perks can also greatly help with this, in turn “forcing” specific classes to a certain combat style.

Perfect dodges, parries and combos are all present, however none of these mechanics has ulterior depth onto itself, with simplistic combinations and underwhelming risk-reward on most counters. Status effects can be inflicted with elemental weapons or abilities, however their effects are barely noticeable, while the weakness / resistance systems are just an afterthought, never really used in any meaningful way.

Character Management
Is done in a standard inventory menu where one can choose the protagonist’s gear loadout. Equipment has a color-coded rarity system, where found loot quality is mainly influenced by the luck statistic, fundamental to get good gear. The mutations panel allows spending three different “currencies” to unlock Wung-Fu combos, mutation-related abilities and perks, other than increase passive elemental resistances. Leveling up and finding specific containers awards such point types. Each level awards 1 (+10) attribute point to spend in one of the six main statistic, and a passive perk point.

Crafting
Is performed in a dedicated menu that allows dismantling, scrapping and creating new weapons. Any melee or ranged arm can be upgraded or changed in type to best suit one’s current build and style. The same can’t be done with armor, which only can be upgraded with “Addons” but never created from scratch. Eventually the “meta” is taking the best pieces from all the greatest weapons one has, to create the ultimate tool of destruction. 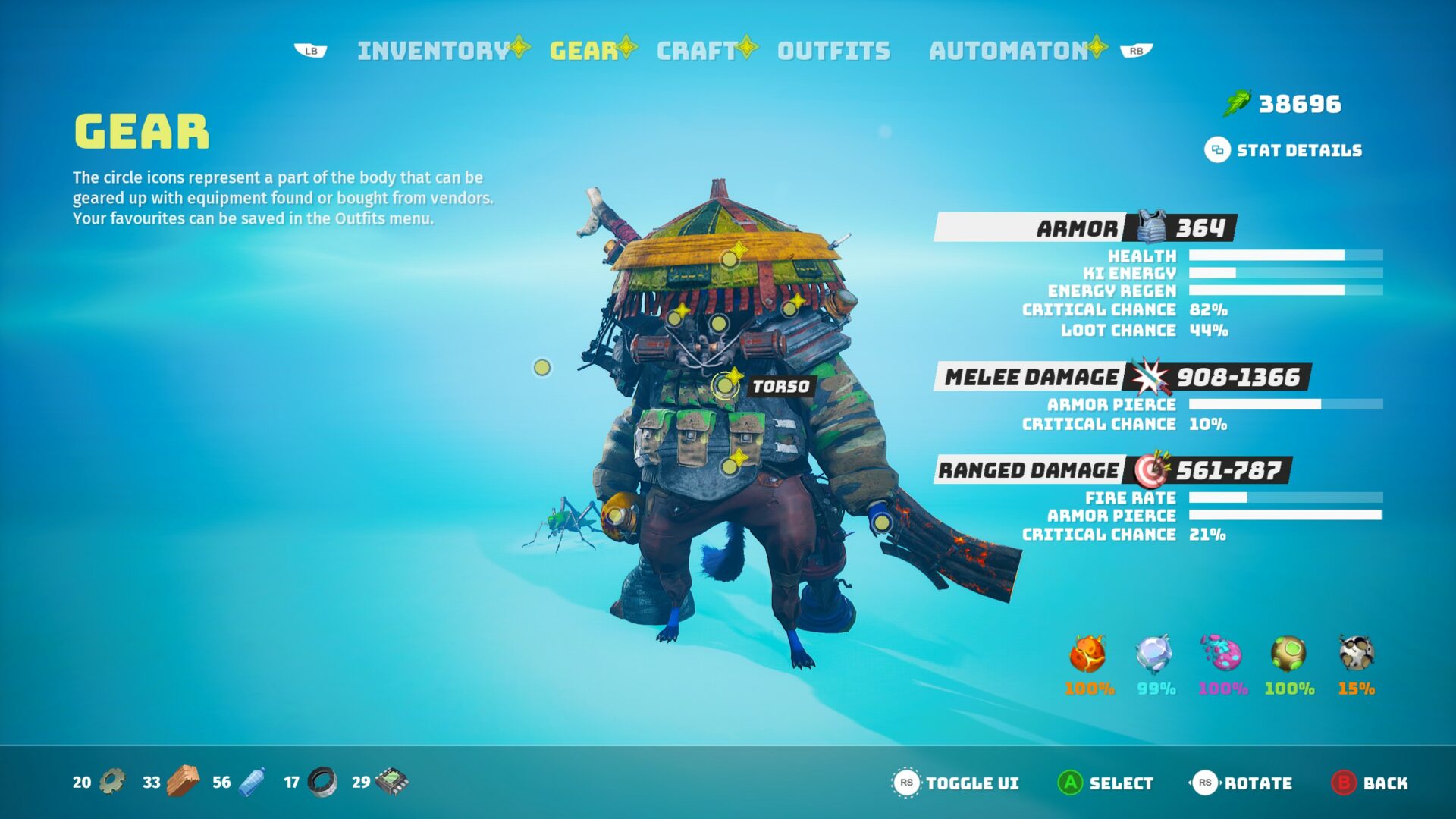 – Noticeable performance degradation in some areas.
– A few quest and character stat-related bugs can happen.

It took me around 27 hours to complete Biomutant’s main story on Hard, along with a large amount of side-quests and world exploration. To clear everything however, it would take an additional 5-8 hours. Considering the AAA-tier price tag of 60€ but only mediocre overall quality, I do not recommend buying at this time.