Retro Machina captivates with its charming art style and original gameplay mechanics, however it never seems to use its potential to the fullest, ultimately resulting in a pleasant but only average experience.

Retro Machina (RM) is an isometric adventure game set in the far future, in a time where Earth is no longer dominated by humans, but robots instead. Players impersonate an automaton that one day acquires self-consciousness after breaking free of its original programming – thus being marked as “defective”. After escaping death, the now-actualized machine sets on a quest to explore this strange, ruined world and find its destiny.

1. High quality, hand-drawn visual style.
Visually, RM distinguishes itself with its hand-painted art style and an original retro-futuristic global design concept. The environments and landscapes are consistent in style throughout the various areas, which onto themselves manage to feel distinct, rather than generic. Overall, the visuals are appealing even if they don’t use the latest graphical tech, as they more than make up in style for their technical shortcomings.

2. Complex level design with many secondary areas to discover.
Exploration feels compelling and rewarding at all times, thanks to a generous amount of secret and optional areas that may house additional dangers, but also great rewards. Most upgrade modules will be hidden off the beaten path, with some collectibles or lore-related files being even downright obscure to find.

3. Decent storyline, fair amount of additional lore.
The one of RM is a tale of hope and self-actualization, although it doesn’t shy away from some dramatic moments as well. The world-building, as far as lore itself is concerned, is coherent and plausible from start to end – the numerous entries and texts scattered everywhere are vital to know more about past events, which are interesting to read about.

4. Good gameplay pacing between combat, puzzles and exploration.
One of the most difficult things in designing any game, is to include various gameplay elements without any of them being predominant. In this, RM succeeds completely, as the blend of combat sections, puzzles and more free-roam oriented areas is pretty much equal parts, regularly portioned along the way to change the pace when needed. 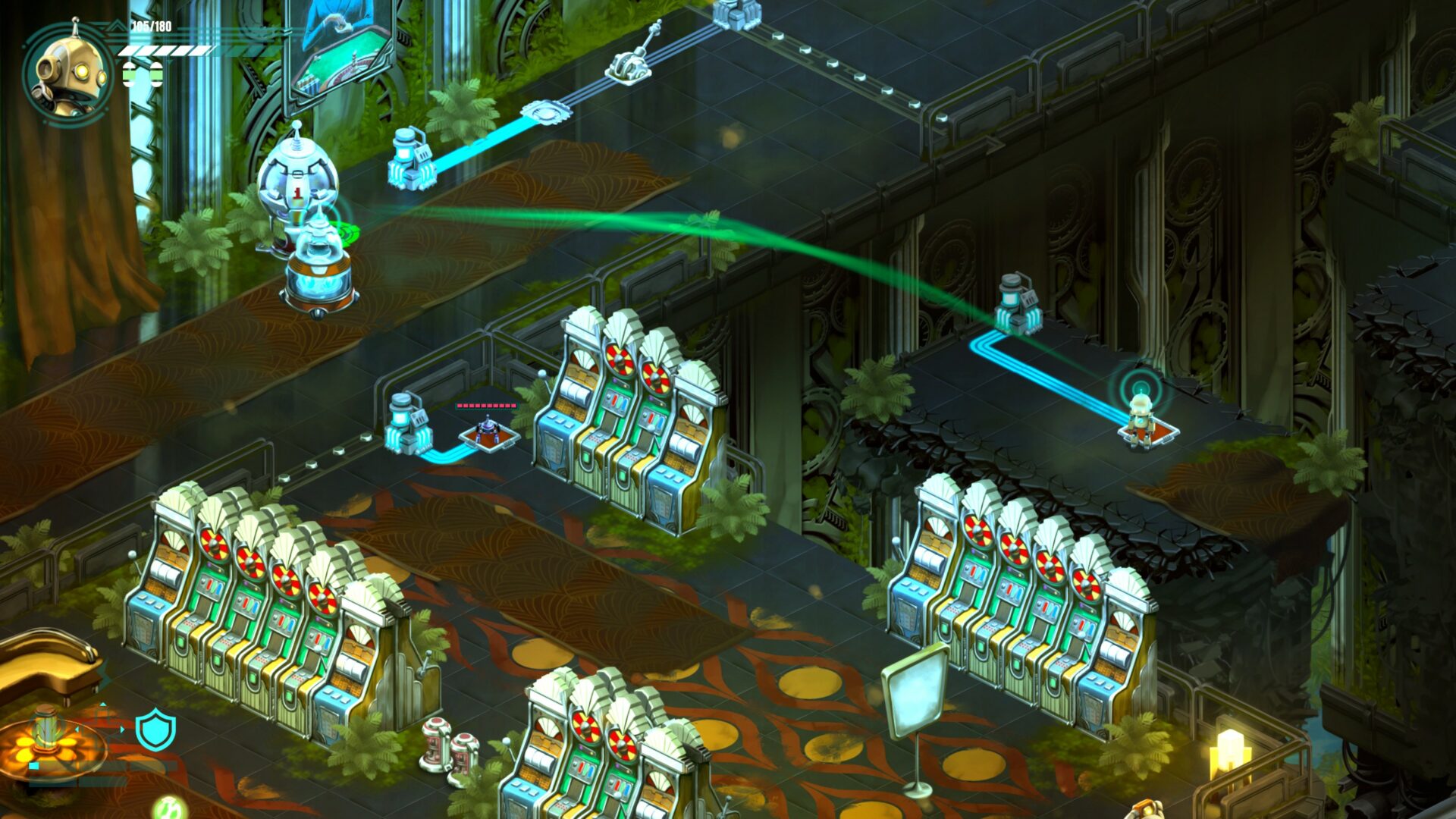 1. Overall, enemy archetype variety is rather low.
While in the first few hours the novelty of new enemies is high, most of them can already be seen in the first map. Subsequent zones will just add one or two new ones, mainly for puzzles’ sake. Most “Elite” enemies will just be a reskin of previous ones with the same patterns, and even “new” ones sometimes share very similar attacks or behaviors.

2. Enemy control mechanic doesn’t adapt well to combat.
One of the gameplay highlights is the possibility to control one enemy robot at the time as a second character. It’s generally not worth doing so during combat, due to overall lack of damage and inability to perform special attacks, factors that do not counterbalance the disadvantages such as shared damage and multi-tasking. Only very few, stronger enemies are worth the hassle.

3. Mediocre, underwhelming boss fights design.
The bosses of RM play out like regular pattern-based fights, where the foe evolves as health decreases, and has a weak point to attack. Except for a very few instances, the original “control” mechanic is never used in such fights: this makes them passable but ultimately mediocre, as they do not emphasize the game’s own unique gameplay features.

4. Some noticeable balance problems.
Some skills and upgrades prove to be unbalanced, especially in late-game. For instance, the “Shield” active skill can be upgraded to the point of absorbing multiple enemy attacks, then be cast again up to six times in a row, while the controlled “Elite” healing robots can make players invincible tanks that simply out-heal any received damage. The protagonist becomes too powerful for its own good in the last third, enemies don’t stand up to par. 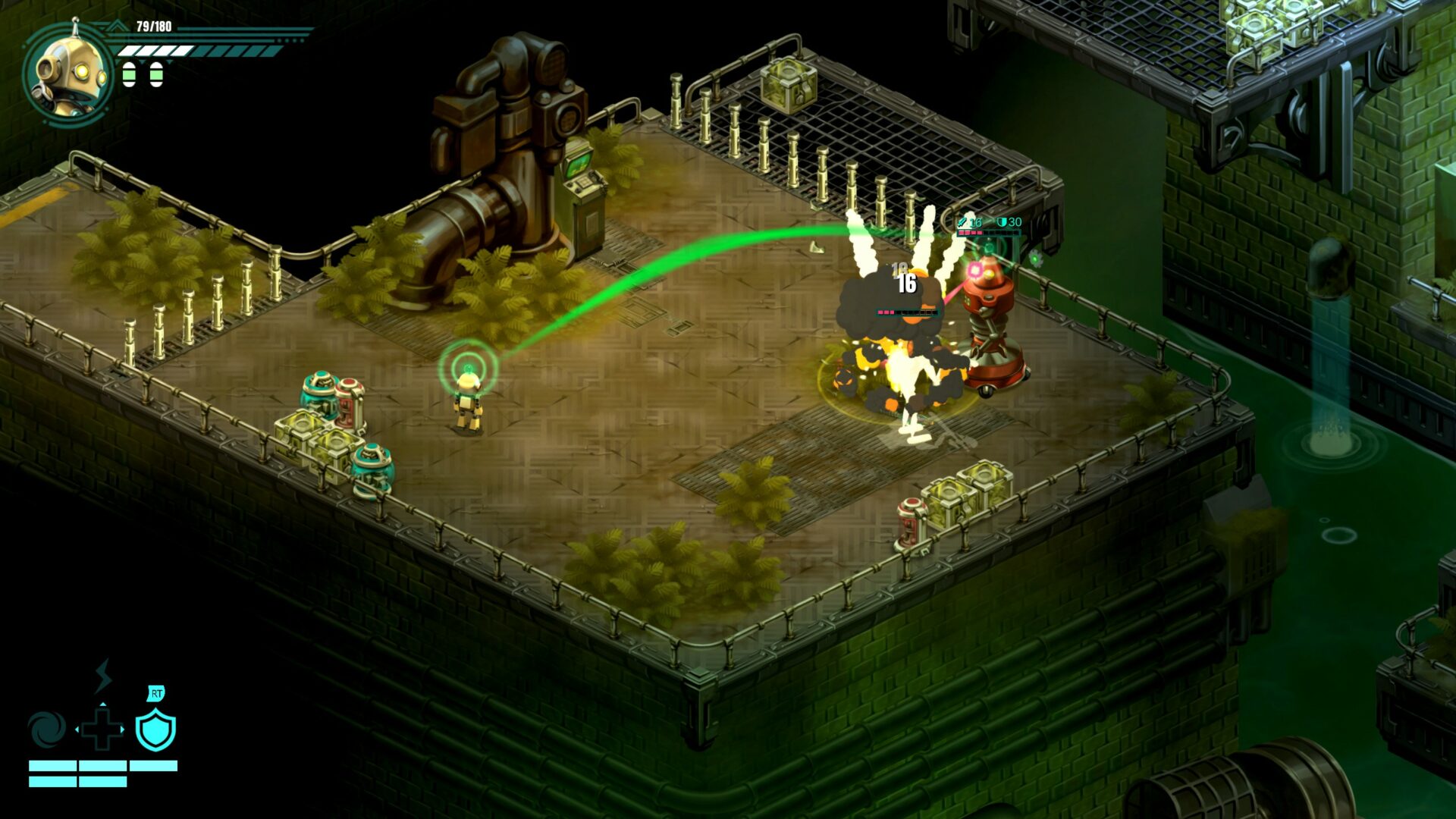 Exploration
Is performed on foot, with the protagonist traversing complex, multi-layered maps divided in zones. Each area has a number of enemies that respawns some time after being killed, and also may change as the adventure progresses. Secrets are fairly abundant, as are secondary areas that do not intersect the “main path”, such places often house collectibles or upgrade points, so spending extra time to look for them is definitely worth it. Fast-travel can be performed between teleports, which often are placed in key locations around each map.

Combat
Plays out in a top-down action style, with the character being able to dodge-roll around unlimited times (no stamina) and even perform perfect evasion, which denies any damage sustained if timed correctly. The main offensive means is a lug wrench that enables a basic 3-hit combo, and later two offensive attack skills which are an AoE stun and AoE damage respectively. Such abilities need Energy to be performed, dropped from slain enemies or breakable containers.

Some parts include combat arenas that spawn one or more waves of enemies and only open up when every single one of them is defeated. Enemies can be controlled, commanded as a second character, an interesting mechanic that forces some noticeable multitasking, but also isn’t worth using most of the time, unless one is forced to by puzzles and such. Checkpoints are frequent and generous: in case of death, progress loss is minimal.

Puzzles
Often involve controlling multiple enemies (one at a time) to help the protagonist press buttons or operate other kinds of machinery in a specific order, with the final objective of opening a gate or moving to the next area. The more complex or annoying puzzles have shortcuts that open afterwards, so players can skip them the next time, if they need to bactrack the section. These enigmas prove to be well-designed, although never really challenging or overly-complex. 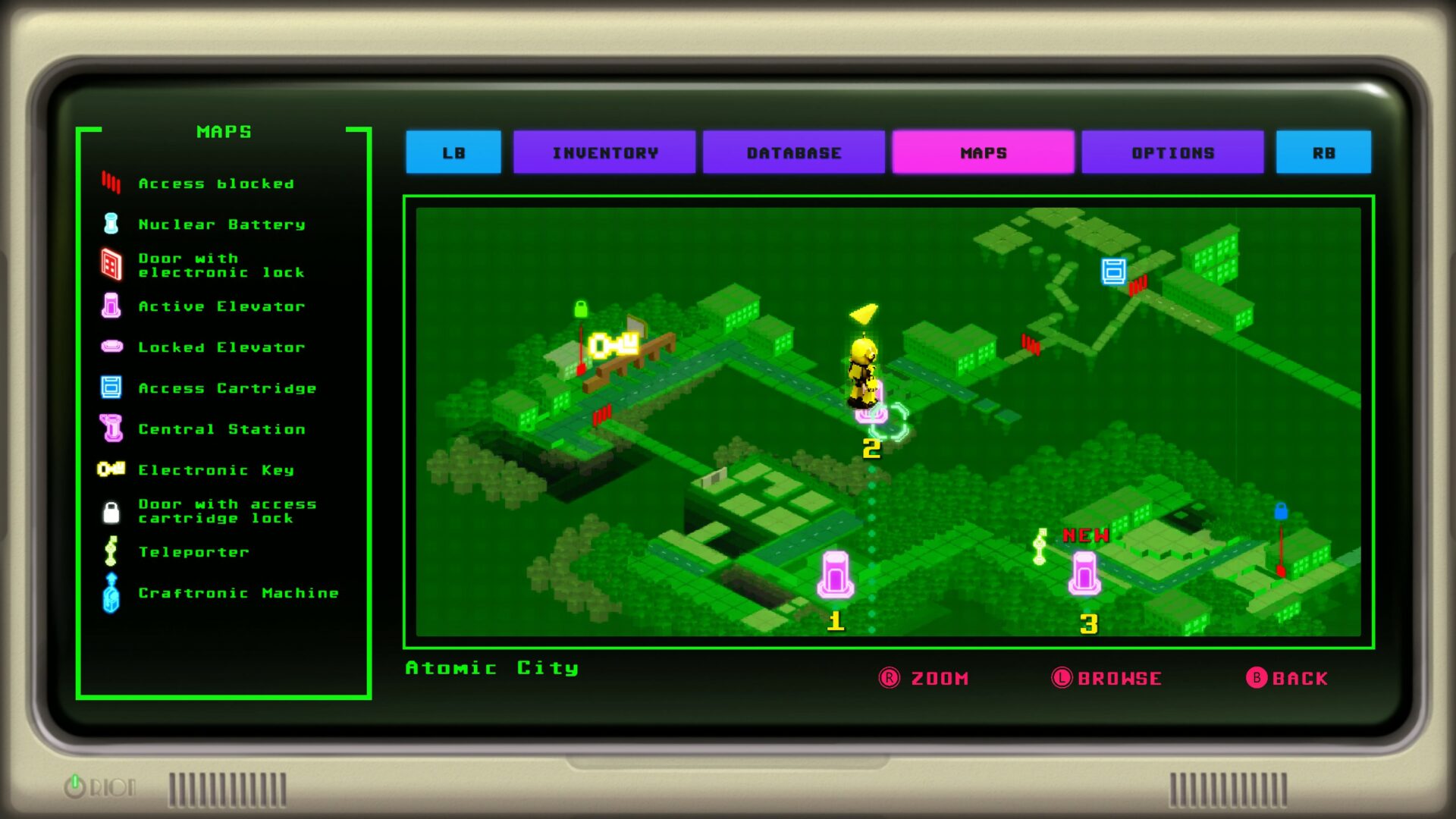 – Sometimes after opening, audio will be muted. Fixed by adjusting it in options.
– In very few places, players can walk outside map boundaries.
– Enemy AI can sometimes become unresponsive if attacked from long range.

It took me around 11 hours to complete Retro Machina. Replay value is negligible, even with a branching choice in the ending, the rest stays the same. For the price of 17€, the content amount is fair, although some may want to wait a small sale, given the only decent quality proposed.