RedRuins Softworks managed to create one of the most original and well made survival games I’ve seen in quite some time. While not perfect and with a disappointing late-game part, it still manages to deliver a very good Survival experience that will please fans of this genre.

Breathedge is a first-person survival game set in open space, after a freighter owned by a funerary mega-corporation crashes into an asteroid field. As one of the remaining survivors, players will have to scavenge, craft and even fight their way to safety – with the ultimate target of returning to Earth.

Exceptional visuals & art direction.
The way Breathedge represents a devastating space crash, along with the struggle of survivors that often die in horrible ways, is nothing short of extraordinary. Each and every location on the map has its own uniqueness – no two places will look the same, ever. The level of care and detail employed in shaping every piece of bent metal, debris, item, corpse and shipwreck is amazing. This is the main factor that makes the atmosphere so deep and involving.

Compelling exploration mechanics.
As the prime activity, exploration is an extremely addictive experience. Open-space without limits (except oxygen) is available straight out of the box, dotted with dozens of unique locations containing resources, collectibles and the thrill of the unknown. Quality level design ensures there is guidance in the form of visual cues, lights and landmarks, not holding players’ hands too much but not leaving them completely astray either.

Very good gameplay variety.
Be it item crafting-based puzzles, base building, combat or avoiding environmental dangers while exploring – there is always a lot of diverse things to do in Breathedge. More often than not, locations will be blocked by special item requirements or dangers that will incentive players to find new blueprints or solutions, which may involve completing other tasks. This is the central piece of a gameplay flow that proves varied, unexpected at every turn.

Sweet-sour narrative that doesn’t get annoying.
The narrative has definitely a satiric, humorous tone at all times, with some darker moments here and there. Despite this, the “puns” and fourth-wall breaking references are almost always well thought out and genuinely enjoyable. Most of the time anyway, it will only be players and the calm background music while drifting in space – nothing else. Narrative and lore elements are paced very well, so they don’t become overbearing or annoying at any point. 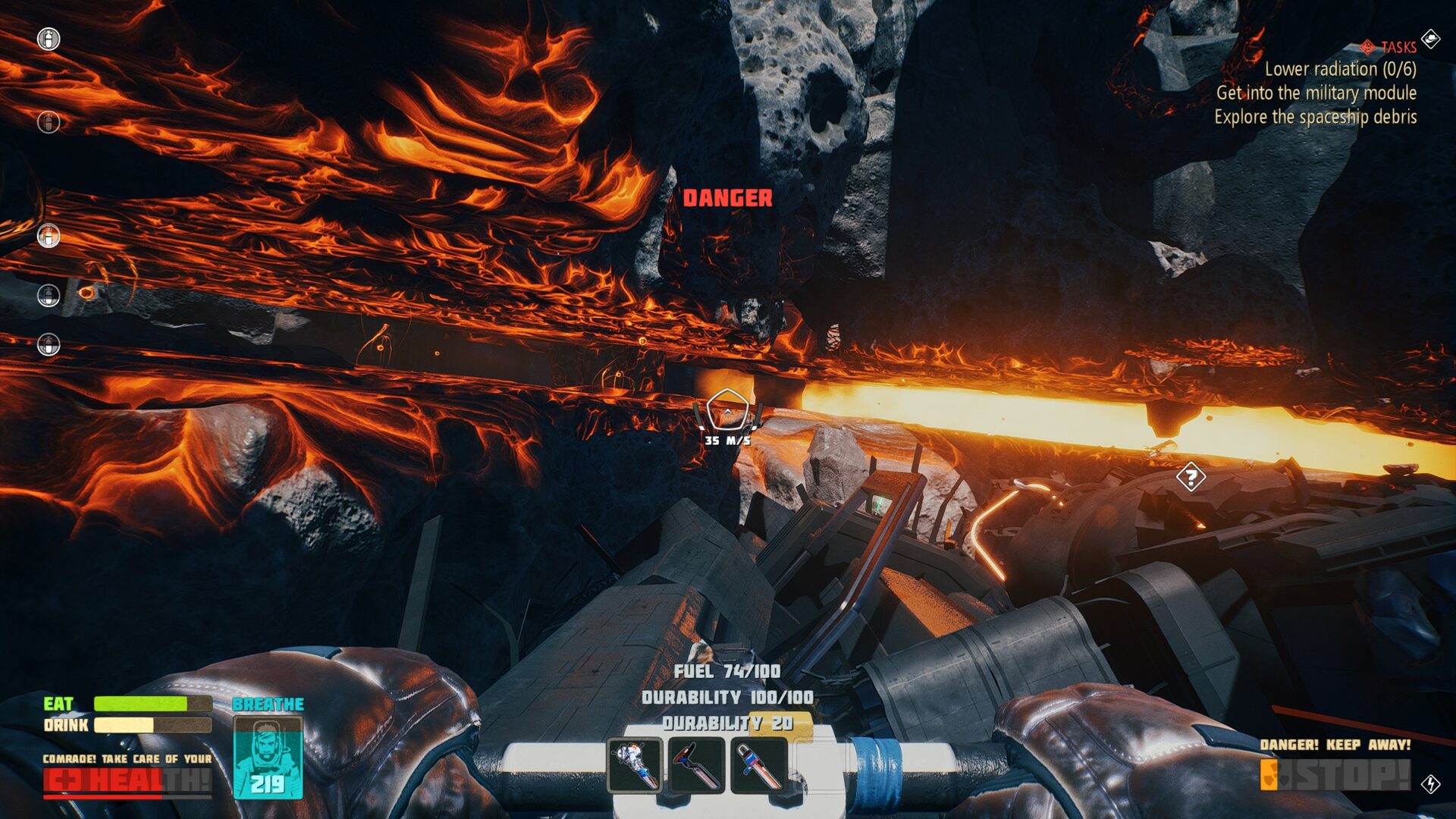 Last story third (Chapters 4-5-6) is disappointing.
Chapter 4, 5 and 6 constitute around 30% of the game content. In this part, Breathedge decides to ditch all the survival, base building and exploration mechanics that made it great so far, opting for a linear, story-focused “walking simulator-like” experience with only crafting and rare combat segments. While not bad, this part just feels a huge rollback from everything seen so far, as if the Devs didn’t have any more time, ideas or whatever else to add.

Some quality of life issues.
Some interface and quality features feel missing for a survival game. For instance, UI markers of deployed oxygen stations or already-explored landmarks cannot be removed: this clutters the visuals. There is no crafting tracking for complex blueprints, and also containers can’t be renamed / diversified for better base storage. Only four hotkeys for tools instead of nine as it’s customary for this genre, also proves annoying.

Balance problems with some elements.
About halfway through the game, the survivor will acquire hardware that will minimize or remove entirely pretty much any danger encountered, such as advanced suits or military-grade hardware that can contain ludicrous amounts of oxygen. Above all, the “car” vehicle is the most unbalanced thing, as it provides unlimited oxygen, defense against all elements and exceptional speed, while also low fuel consumption. After this point, the “survival” feel diminishes a lot. 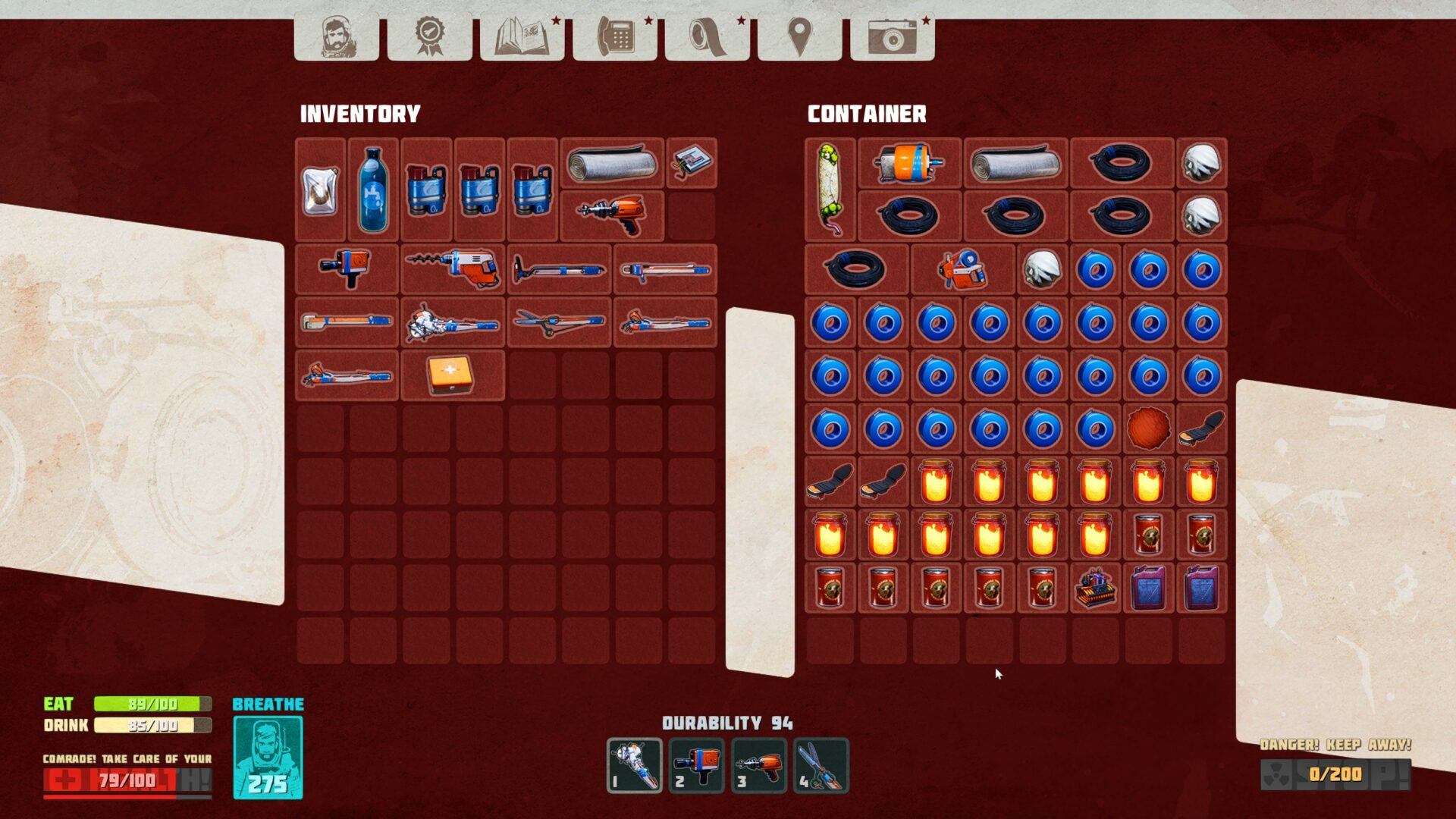 Exploration
Is king in Breathedge, and is performed using the suit’s propulsion system initially and later on with vehicles when available. The biggest concern at all times will be oxygen, very limited at first and allowing only brief runs before returning to safety. Eventually, oxygen stations can be deployed to build a “refill network”, and also one-time consumables can be used to replenish it, other than certain “safe zones” which have an unlimited supply of it. Other dangers include electricity, heat and cold, which can be countered with special suits or clever maneuvers. Exploring is fundamental to get enough resources to craft story-progression related items, but also find more blueprints to expand exploration capabilities (such as oxygen tanks). Hunger and thirst also are present, however they’re not huge issues at any time.

Character Management
Is done with a classic inventory menu where one can store all items found in the world, and then deposit them in containers or on the ground. Each item is permanent and will never disappear. The carry capacity is generous, but cannot be expanded further, it is definitely more than enough for large supply runs to be done anyway. Spacesuits and equipment can be changes on the fly from the inventory, by using the four hotkeys (1-4) or manually. Generally all items have instant use, while most tools have very limited durability and can’t be repaired.

Crafting
Is done at any Processor table, mostly found in safe zones like semi-functional shipwrecks or a custom base, when it’s possible to make one. Except for the most complex machines, the quantity of resources needed is pretty small compared to the huge amounts found in the world – some are much more rare than others though and each needs specialized tools to harvest. There likely won’t be a situation where players run out of a resource completely or soft-lock themselves, because there are so many. New blueprints can be acquired by Scanning a new tool or machine with a tool, or by researching them at a research station, present only in custom bases.

Puzzles
Are generally about crafting and delivering the correct pieces to make something work, or understand the logic behind a closed gate or automated security. Some can be brute-forced (literally) while others will require some thought. Generally there is good guidance and none of them is overly obscure.

Combat
Is a minor aspect overall, and plays out with the only available manual weapon, the blaster. It’s a simple, arcade FPS style combat against enemies that won’t prove much of a challenge most of the time, such as fixed turrets or robots. 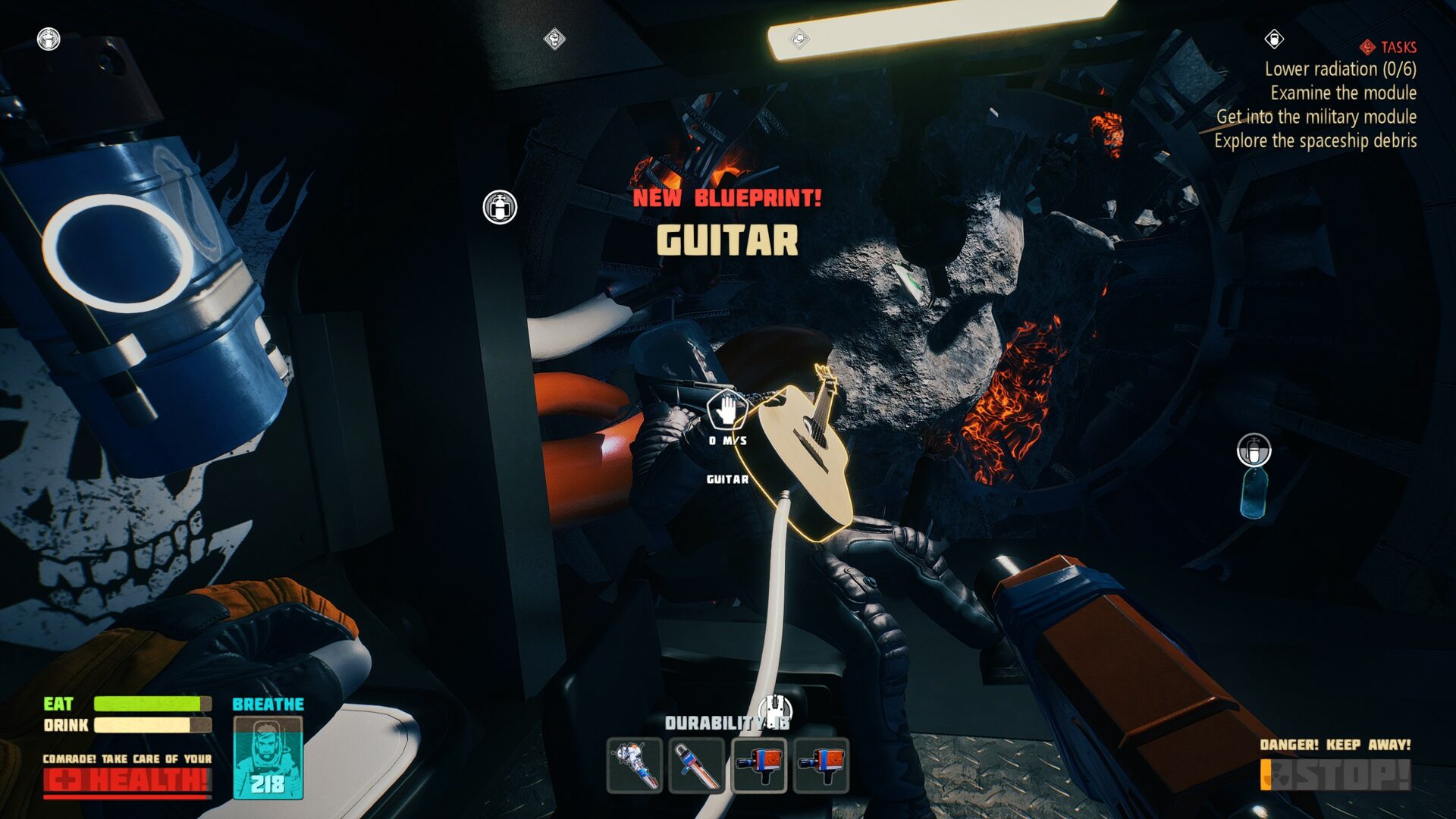 Bugs & Other Issues
– Players can rarely get stuck in some objects.

It took me around 21 hours to complete Breathedge, taking time to explore and clear all secondary content I could find. Content amount is definitely very good, while the replay value isn’t very high, though there are additional modes like Creative to boost it a bit. For the price of 25€, this content amount is completely fair: I recommend buying for full price.