Gem Wizards Tactics may not have a story mode, but that doesn’t mean there can’t be a little backstory to set the scene. This takes place in Omia where seven magic Gems shaped the world around them. With each gem, a faction corresponds with them. Though, a certain legend told of the possibility of an eighth gem. Which, did end up being true as one of the factions actually found it and took it for themselves. Using it to defeat the other factions and take their land. It’ll only take one faction to stop their reign of terror, and hopefully you can stop them.

After taking a quick run through of the tutorial, you’ll be able to jump right into the campaign. The campaign is simple, you need to liberate your people. Your goal is to make it to 100%, but you’ll also be running against the clock as your enemy’s power will also increase, and make battles harder as you go along. A campaign will fail either when Enemy Power reaches 100% or you lose all of your squad members. Who you’ll be going against, which I’m assuming was the ones that stole the eighth gem, is randomized. 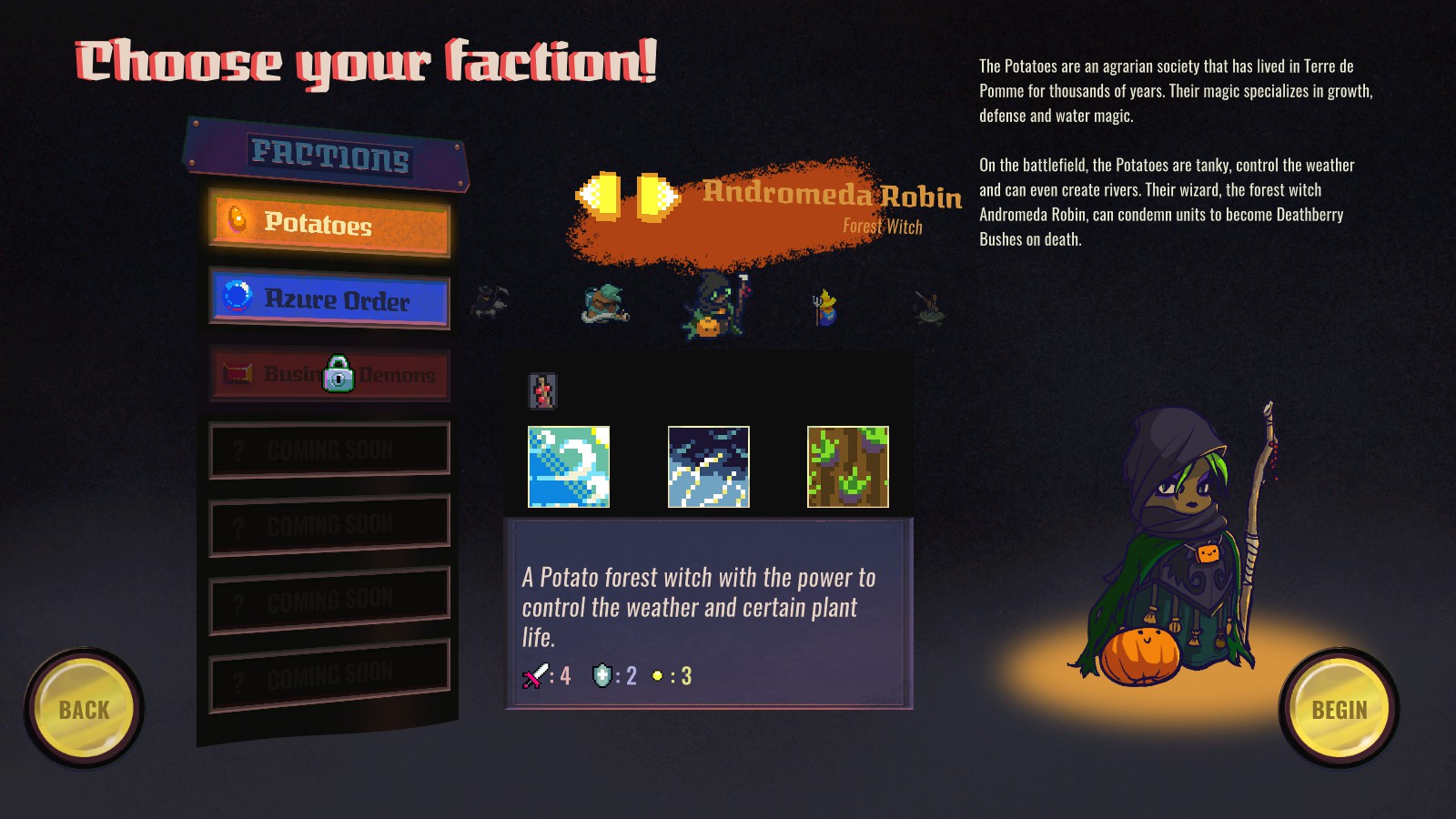 But first, the factions! After all, you have to choose one before starting. There are three available factions you can play as, and each of them do have their own strategies to take advantage of. The Potatoes Faction focuses on growth and water magic, as they’re an agrarian society, with defense to make them hardy. You’ll notice that they have the ability to shoot pressurized water, which will bump enemies caught in it and splash tiles with water; while their leader, the Forest Witch, can shortly command the weather and plant seedlings on wet tiles. The Forest Witch also has a neat passive buff where anyone she attacks is given a curse and will turn into a berry bush that can replenish anyone that steps into that space. Next, the Azure Order Faction are basically knights, with the added bonus of specializing in ice magic. They have the expected abilities for knights, being able to charge at enemies to do damage that ignores defense, archers to shoot from a distance, being able to shield bump, and, well having an ice mage on board. Though their leader, Gelf Lanz, can summon an ice elemental. And lastly, the Business Demons which, as the name implies, are demons that are a part of a massive corporation. While they are focused on fire magic, as they will set everything on fire, they also focus on altering the environment. Whether that be paving roads or destroying it to search for precise oil. Which the oil can be picked up to increase attack power and increasing their stock portfolio. Which their leader, Bill Milton, can then invest into increasing his squad member’s attack, heal (for a price), and even force development to produce oil or an oil monster depending on the tile’s terrain.

Each faction is designed to combo with each other, as well as those outside of its faction. Like wetting tiles will let you summon a seedling, you can bump your unit (or the same unit on the enemy’s side) that rolls until it hits something, or even cause units to slide if there’s ice or oil on a tile (which, can happen when using an ability that bumps units). While I haven’t set this up myself, I can even imagine being able to set up an oil slide and using the knight’s charge ability there to deal major damage. 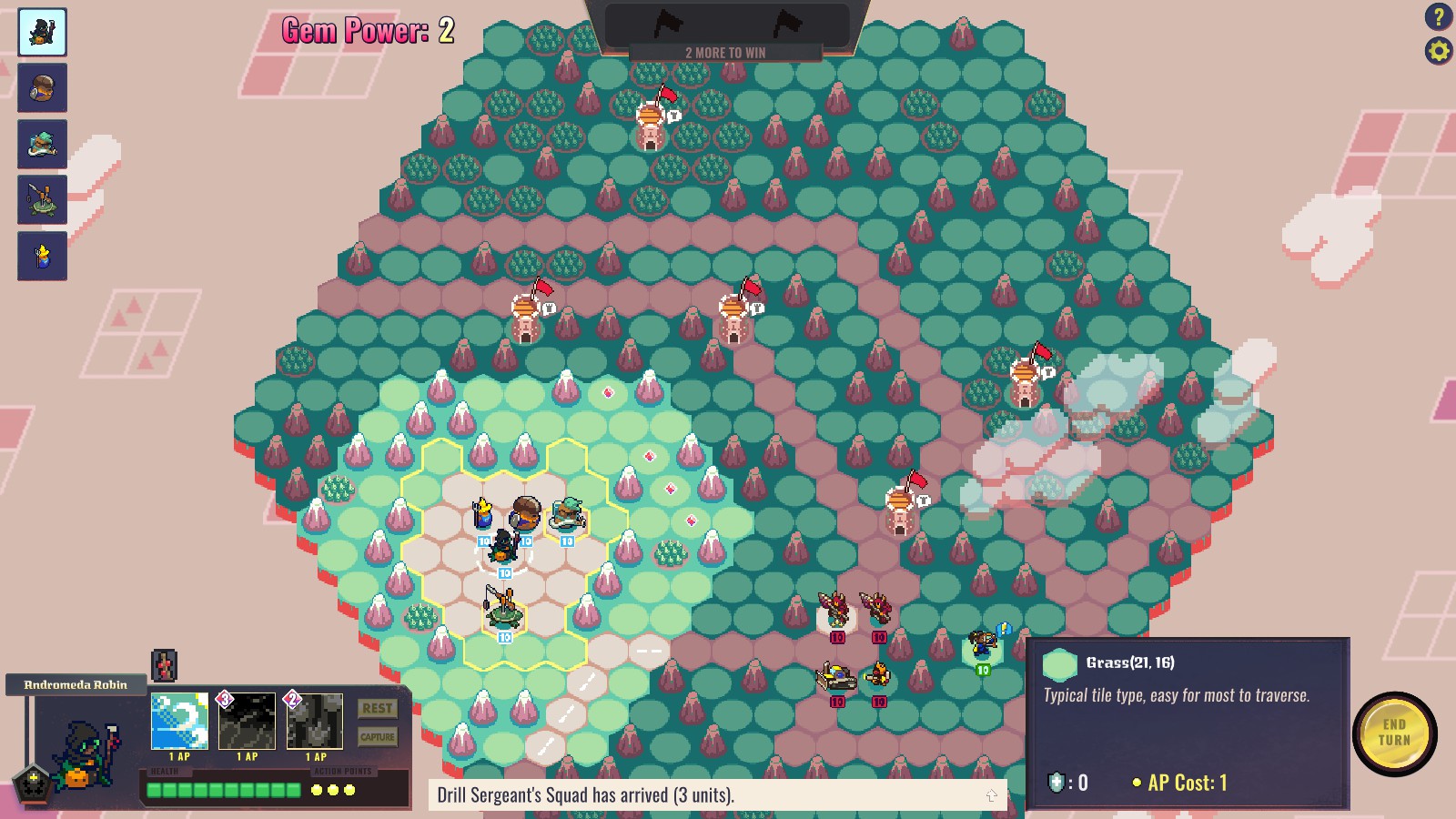 Once you select your faction, three missions at a time will be available to choose from. You’ll have to take into account what map type you’ll be going on, what Liberation percentage you’ll be granted if you win, and the possibility of saving units. Once you choose, and edit your squad party if needed, you’ll be put on the mission’s map. You’ll be spawned in one corner of the map, units spawning on random tiles. The other areas of the map are darkened, only giving you view of castles and certain enemy units, until you move to uncover what’s there. You’ll also be able to see where any rescuable units will be, which you’ll need to move to them to add them to your squad. You’ll be tasked with capturing a certain number of flags, which seem to increase as you continue the campaign, which you can do by defeating enemy leaders or capturing castles after all the enemies around it die or pushed away. 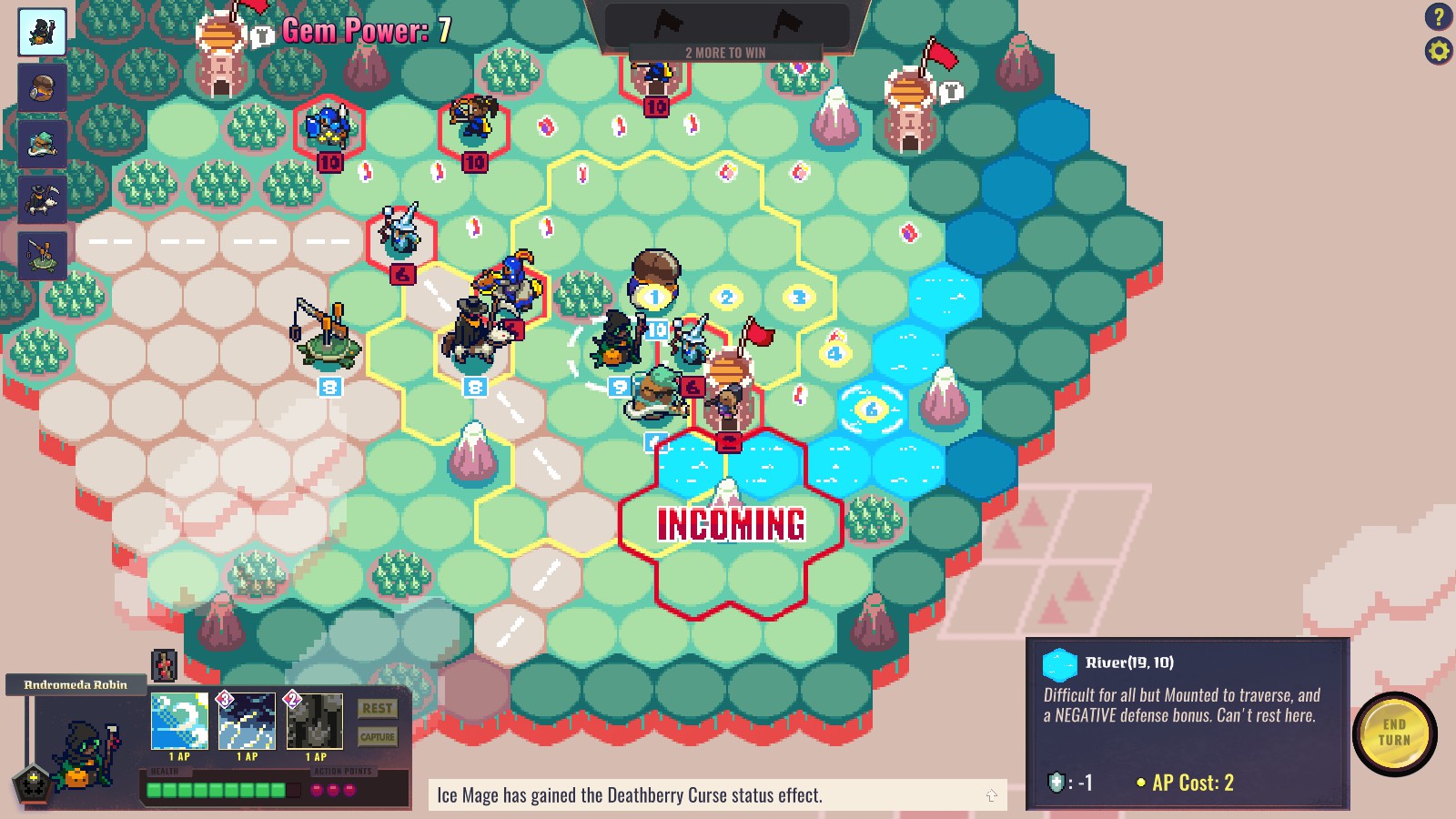 Of course, this is all about combat. For the most part, you have to move adjacent to an enemy unit to attack, with the terrain fighting against how many tiles that unit can move that turn and even giving you an advantage or disadvantage in defense depending on the tile. You can attack without having action points, with attacking also depleting all action points, and you’ll be able to see how much damage you’ll do (which sometimes will have a damage range) and how much you’ll take as the enemy unit will attack back. You can flank the enemy by positioning two of your units opposite of each other to avoid the enemy hitting back though. Luckily, you also have abilities to work with to give you an edge in battle, like attacking from a distance, and will require action points to use. Though, some abilities will require you to pick up gems, which appear on tiles, to be able to activate them.

Also, as you can notice, the map isn’t exactly enclosed. Well, on the edges, you can indeed cause units to fall off. Which can be extremely helpful for enemy units with high defense or frustration as the enemy AI catches you too close to the edge and pushes you right off. 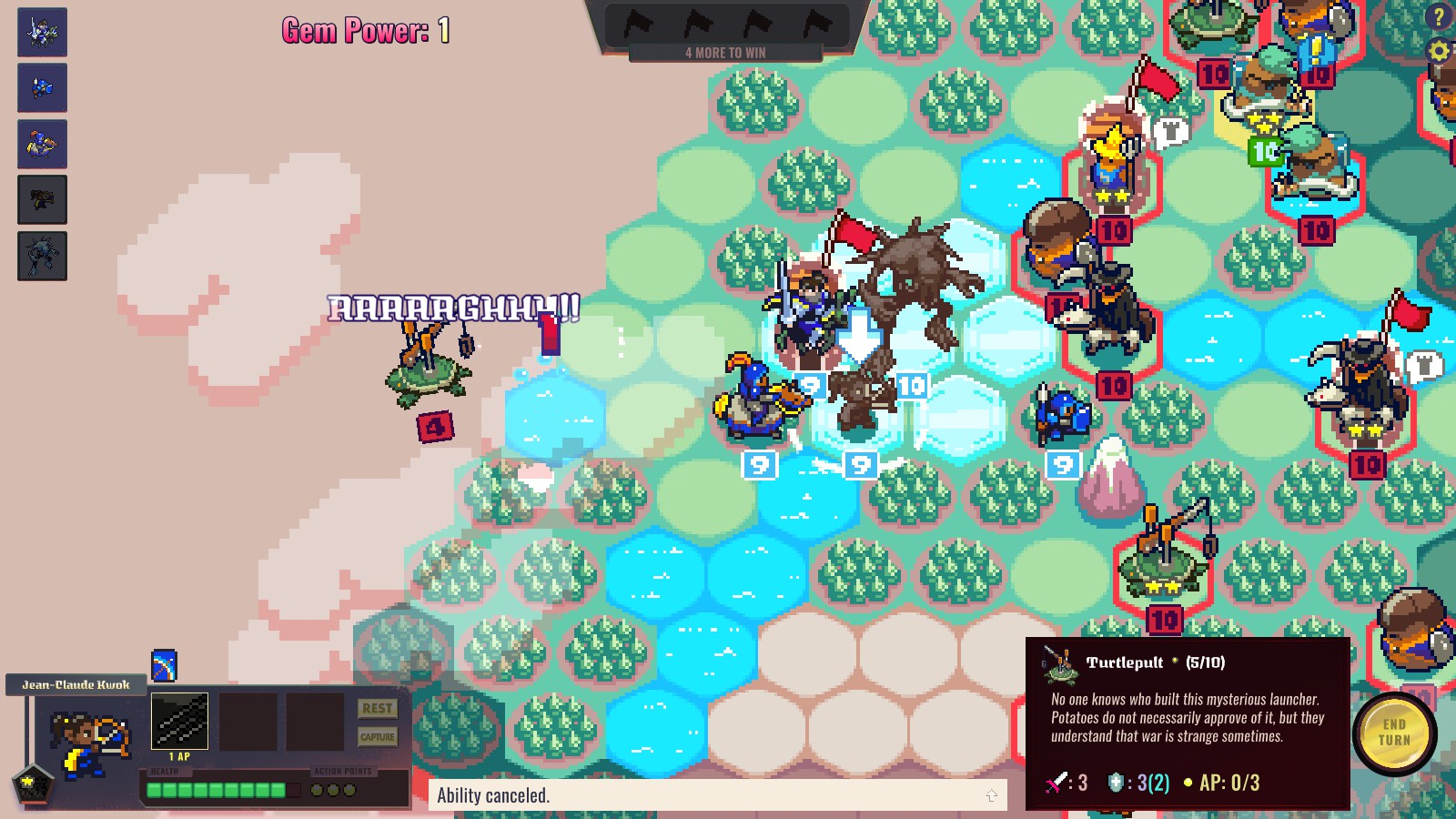 Though, don’t let the cute art deceive you as this game can be hard even on the early missions. You only have a handful of units to work with and keep alive, with the enemy having a lot more and being able to summon for reinforcements. Not to mention any units that die in battle, save for the leader, are permanently removed. Though, even the units you can save can be put in areas that are way too dangerous and just not worth the effort or losing even more units, or even the campaign. It certainly lessens up as you learn the factions and how you can have units work together, but it’s still difficult. 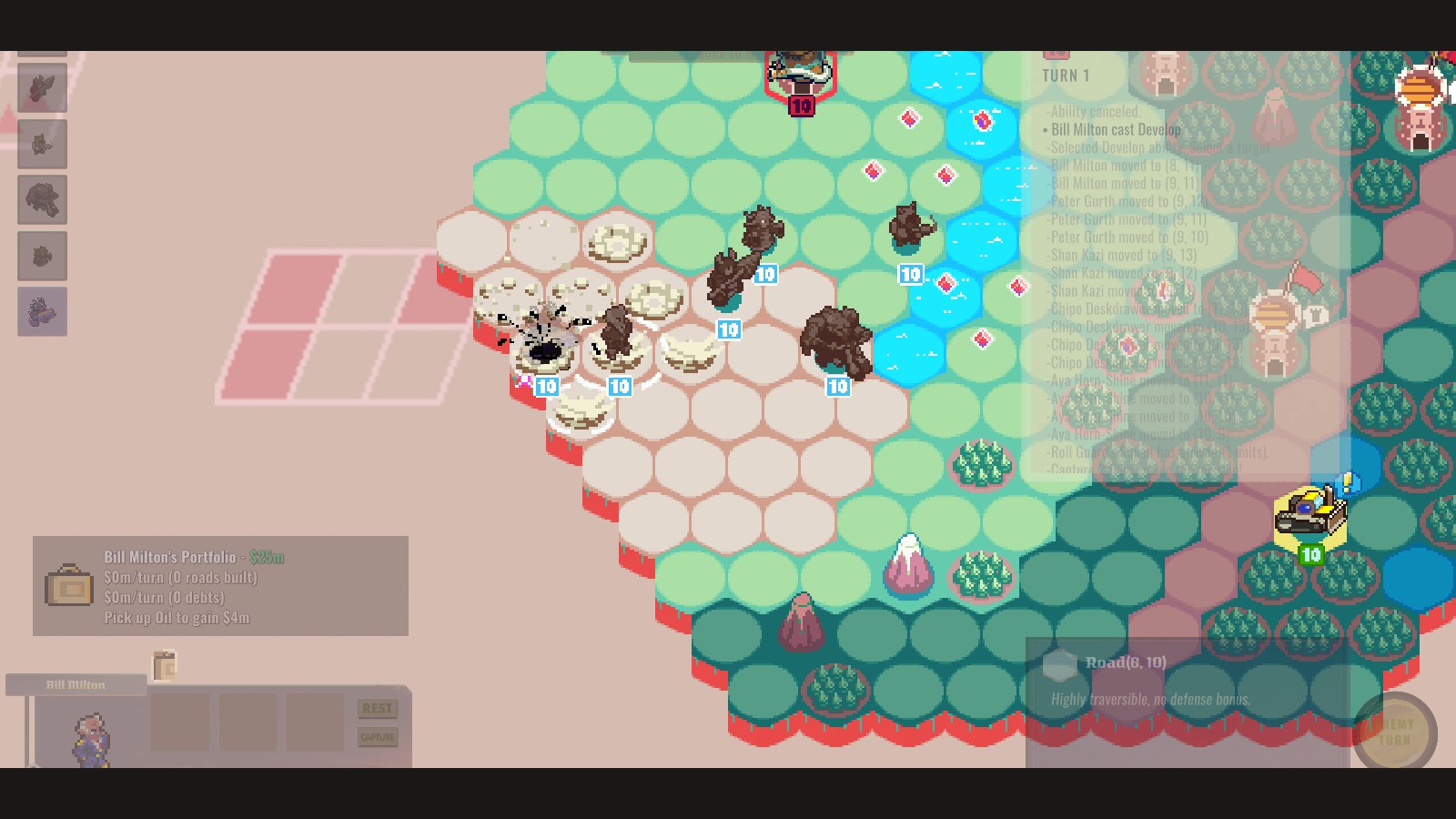 Right now, there are only three different factions in the game, with seven planned. While it’s risky going into a game that doesn’t have everything implemented yet, I do hold confidence that the developer will add them in and improve balancing as they go along. Even when the game hasn’t even been released, multiple updates to fix bugs or to do some slight balancing adjustments were made. And if that’s not a sign that a developer cares about giving players the best experience, I don’t know what is. Three, out of four, factions that haven’t been implemented yet have been teased though. In the future, we’ll see a faction of bug people that specializes in burrowing into the ground, a faction of undead skeletons that can raise the dead as they wield rock and roll music, and stuffed bunnies that will focus on avoiding combat and specialize in healing. 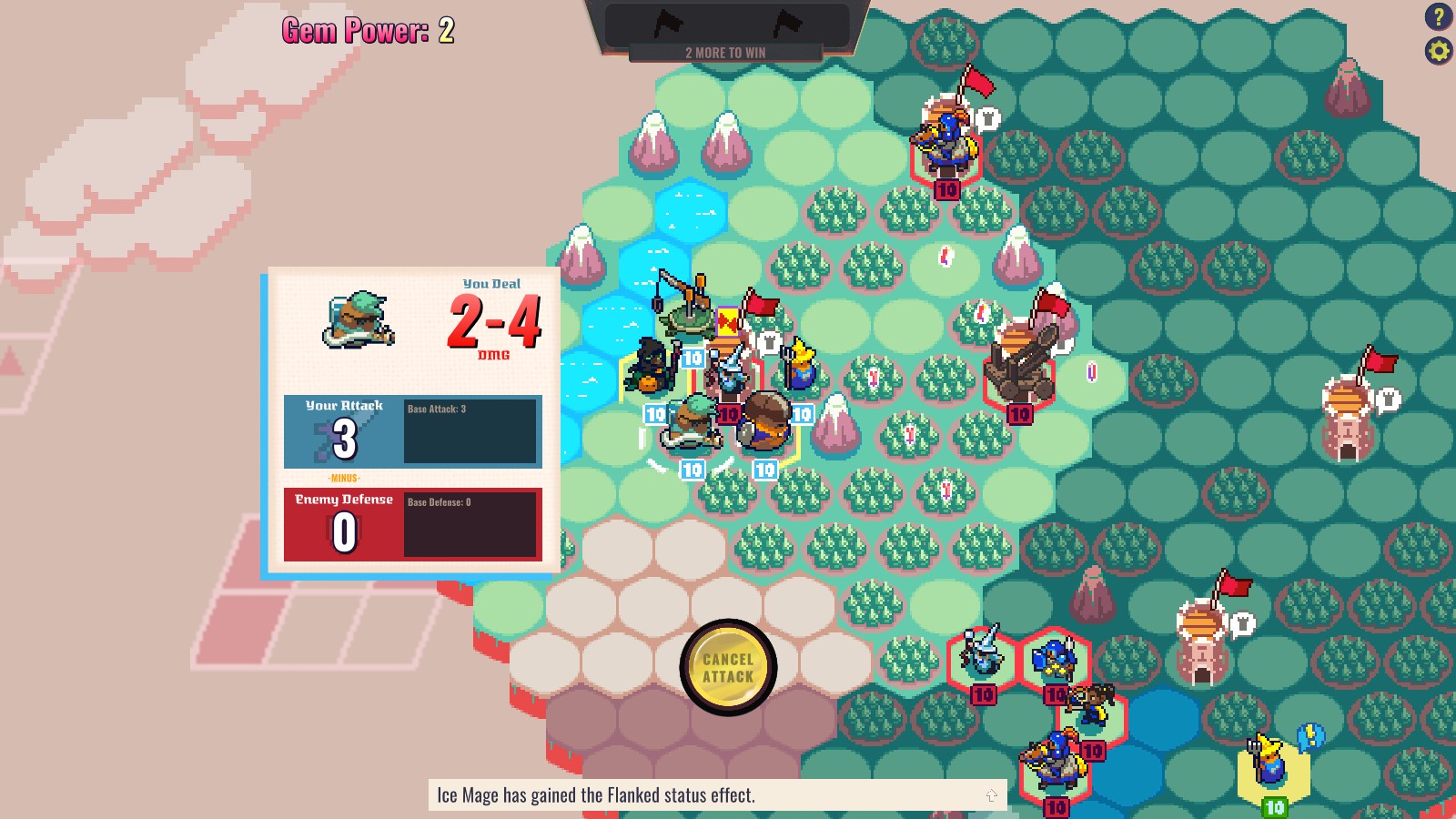 If you’d rather not go into the campaign and looking more for a single battle, there is a Custom Game Mode. This basically lets you set up a mission to your liking. You can choose the Rank (which I believe is what difficultly you want it at) between 1 and 20, what your and your opponent’s faction will be, and what map type you’ll be spawning on. Though, you can set factions and map type to random to make it exciting.

There’s also a Ranked Mode that you can jump into. It’s essentially a randomized Custom Mode, but your Rank will increase as you win battles and be challenged to reach Rank 20. You can jump halfway to Rank 10 if you wish to start off at a more challenging point (which Rank 1 is challenging enough) or you can use it as some sort of checkpoint if you want to get there yourself first. 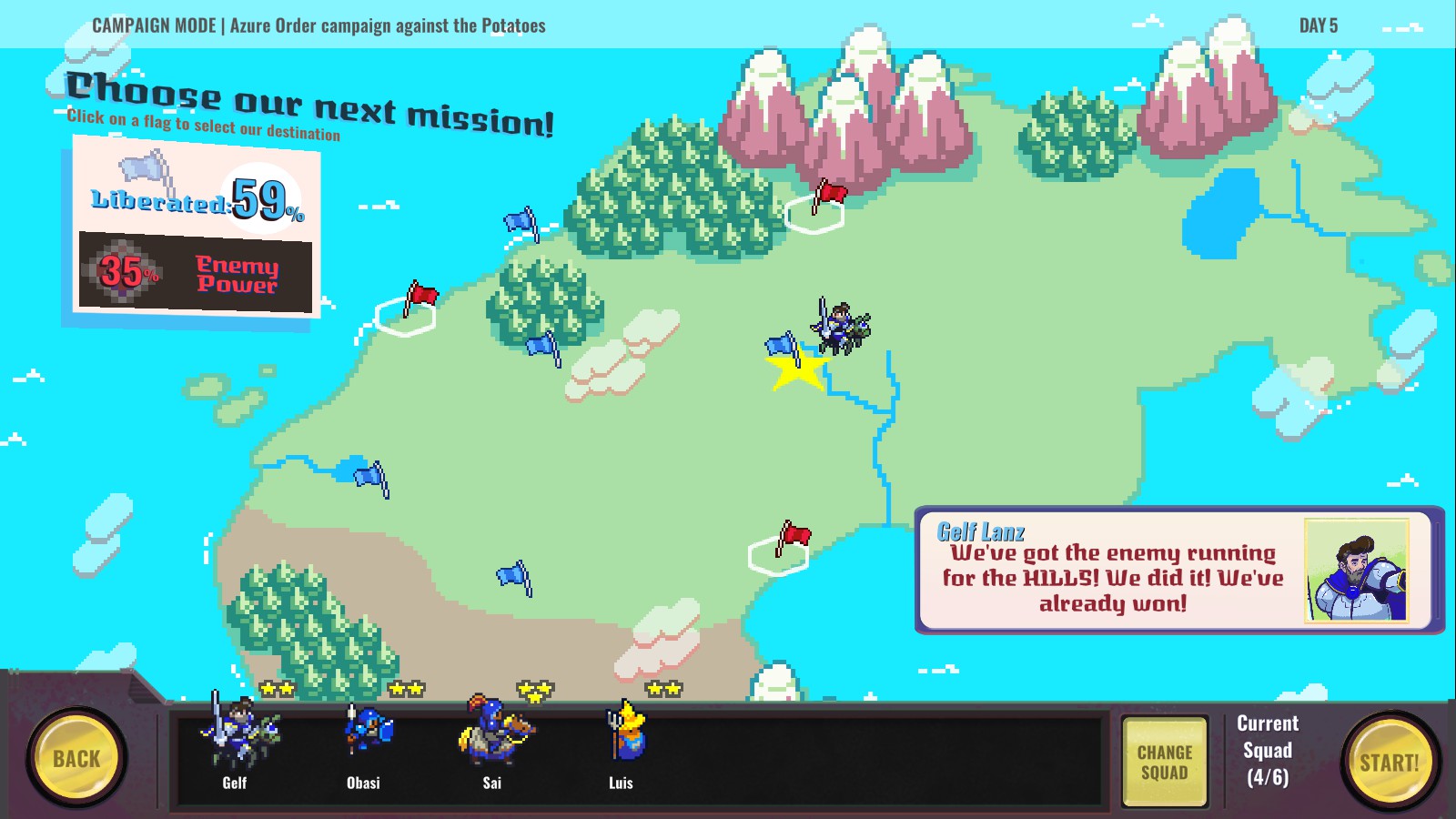 To be honest, I was mainly drawn to Gem Wizards Tactics by how cute it was and then the gameplay video the developer put out to show off the game. And well, it does not disappoint. The different factions do indeed play differently from one another, mixing other faction units into your own does synergize well, and it is challenging.

I’m hesitant to recommend this to anyone that’s more into casual turn-based strategy games as, like I’ve mentioned before, the game is hard early on. The difficulty, at least in Campaign Mode, has been getting better at gradually adjusting the difficulty as the developer continues to tweak the game’s balancing. Other than that, there doesn’t seem to be any plans to implement any difficulty settings, as the Ranks serves to be that. So if you’re into hard turn-based strategy games, love using your units to their fullest and even your enemies attributes against them, and don’t mind that campaign mode is just doing missions, it’s worth checking out Gem Wizards Tactics.