Quantum Suicide puts you right into the action. Taking place in a sci-fi universe where a crew has set out into space for a mission, you arrive on a ship called the Everett. It seems like you were just floating in space in an escape shuttle, but you don’t remember what happened that could have caused this (don’t worry, this doesn’t last the whole game). You do know that you are a researcher, in fact you actually have an information chip with your basic personal profile showing that you were actually a resident of the Everett. It’s just that you and your family was presumed dead after you three left. Well, now you made it back… without your parents. 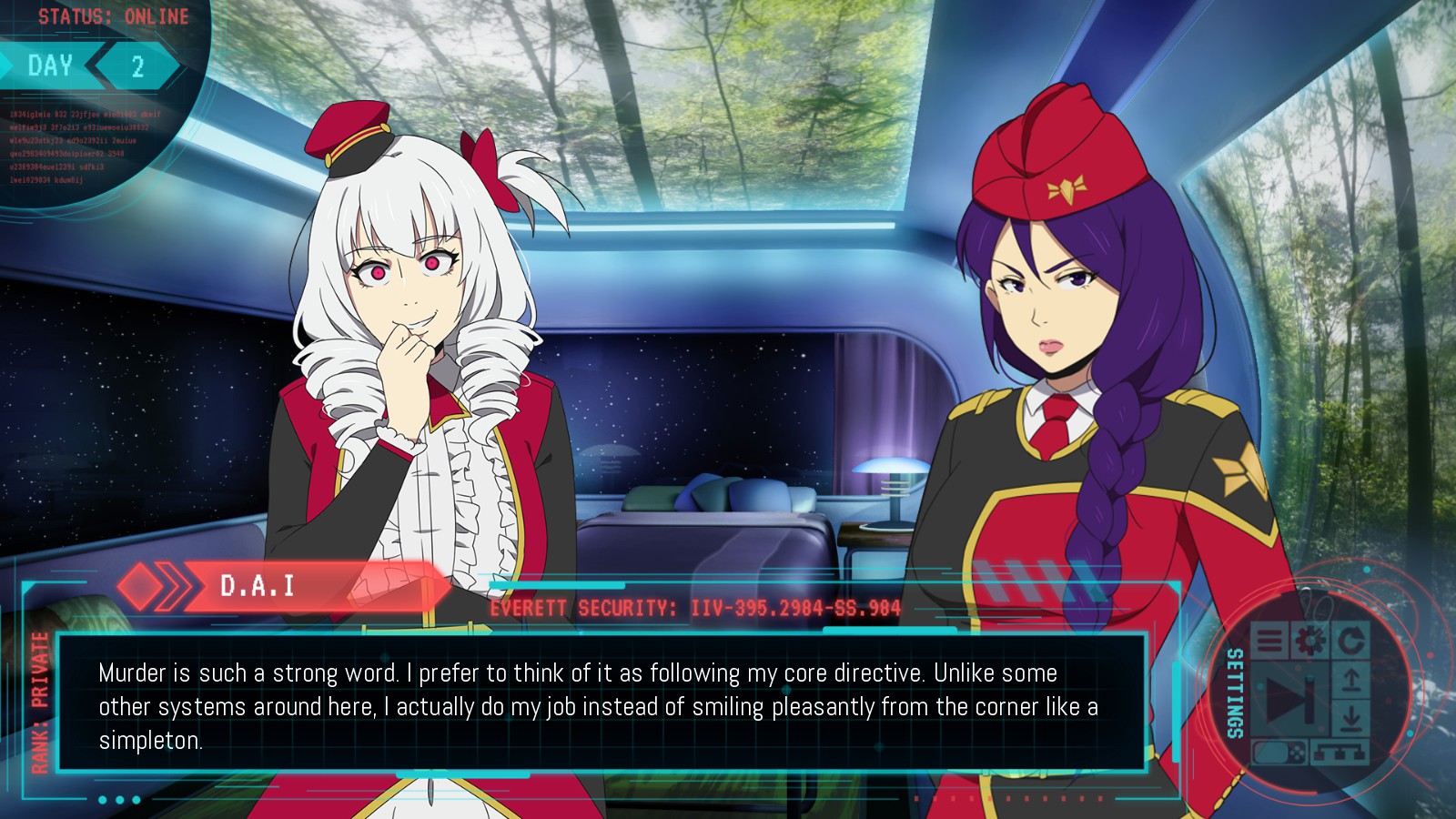 However, this isn’t going to be all fun and games. When the Everett’s crew picked you up, their AI, simply named Ai, had a deadly code triggered inside of her. Picking you up caused Ai to sense that the ship’s capacity was over and recognized there wasn’t enough resources. Instead of directing them to a nearby planet where they can gather more, Ai defaulted to the solution of decreasing the number of crew members instead. This, well, corrupted Ai and caused her alter ego to surface, named Dai, who isn’t as robotic as Ai and is gleeful at playing with the crew and killing them. As Dai can’t simply have you excluded from her wonderful Deletion Game, despite Kimiko’s (the captain) objections, you’re brought in as another participate. So not only will you have to try to survive Dai’s Deletion Games, while pushing away the guilty feelings when others die, but also navigate through a new crew that you don’t know. Hoping you’ll stay alive long enough until Dai deems the crew being below the max capacity, find a way to get more resources, or prove to the crew that you’re worth keeping around (or make relationships with them so they wouldn’t be inclined to boot the new guy off). 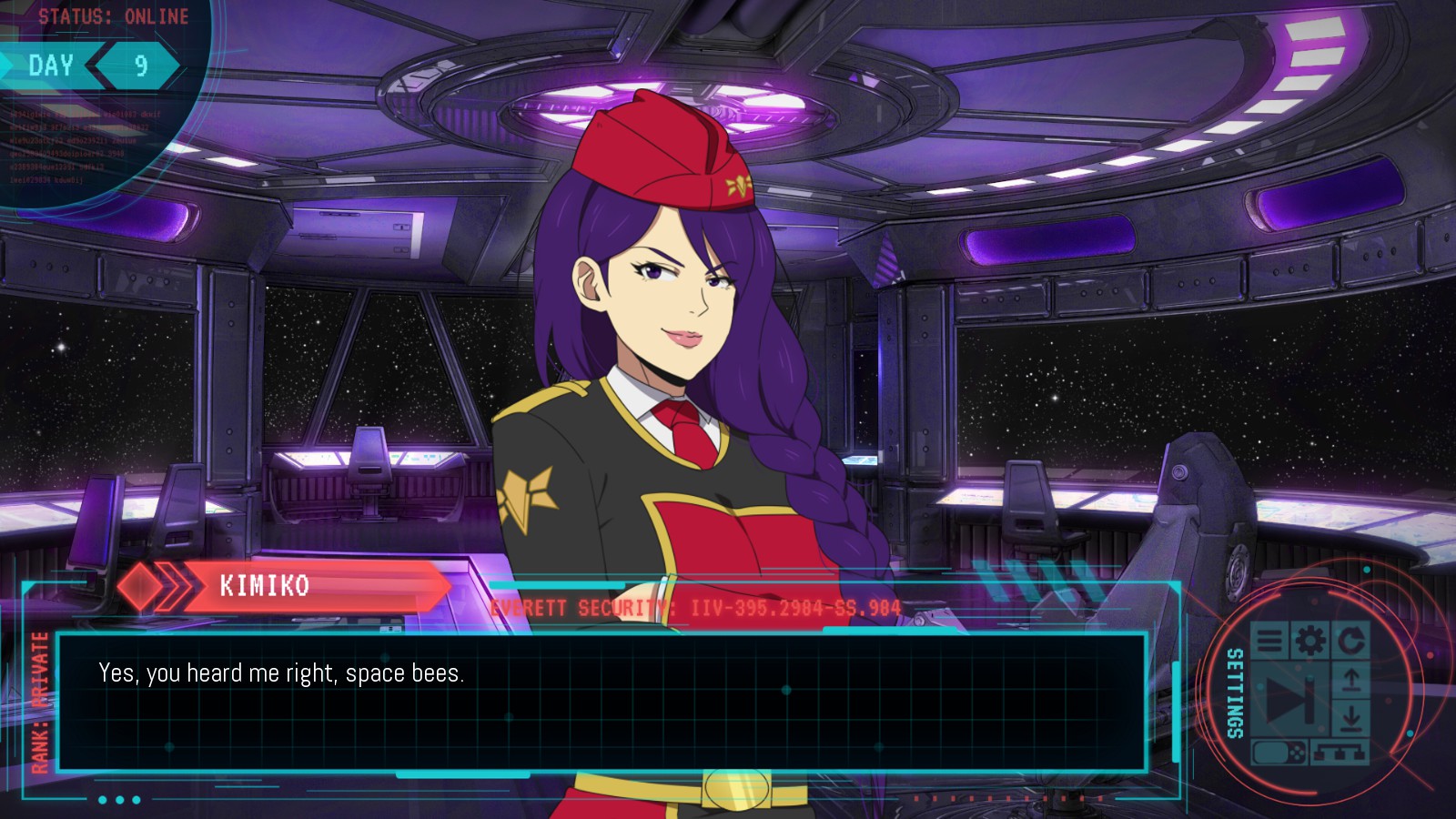 You do have the option to play either as a male or female, with actually being able to switch between the two when looking at your route map. Though, there is a surprise here where the female and male route maps are separate, so while you might have went through some route points as a female, it wouldn’t unlock on the male route map. So is it even worth going through all the routes essentially twice? Well yes. While a lot of other visual novels will have things mostly the same, Quantum Suicide doesn’t. Past the main plot points, which obviously needs to happen, and after the route starts to diverge, there are enough differences. There are even differences within your choices that don’t effect your route. Based on what gender you chose, different people will die, they could have different deaths, some will have a different opinion of you, and the endings (including some death ones) are different. Between those, the choices you make essentially boil down to who you interact with and what you choose to do or say. Instead of having dialogue choices more or less boil down to the same conversation, the conversations are different between each. With the choices pertaining to what you’ll be doing are as simple as determining who you’ll be hanging out with, deciding to hang out with them (which declining will skip that scene completely), or whether you die too early in some cases. 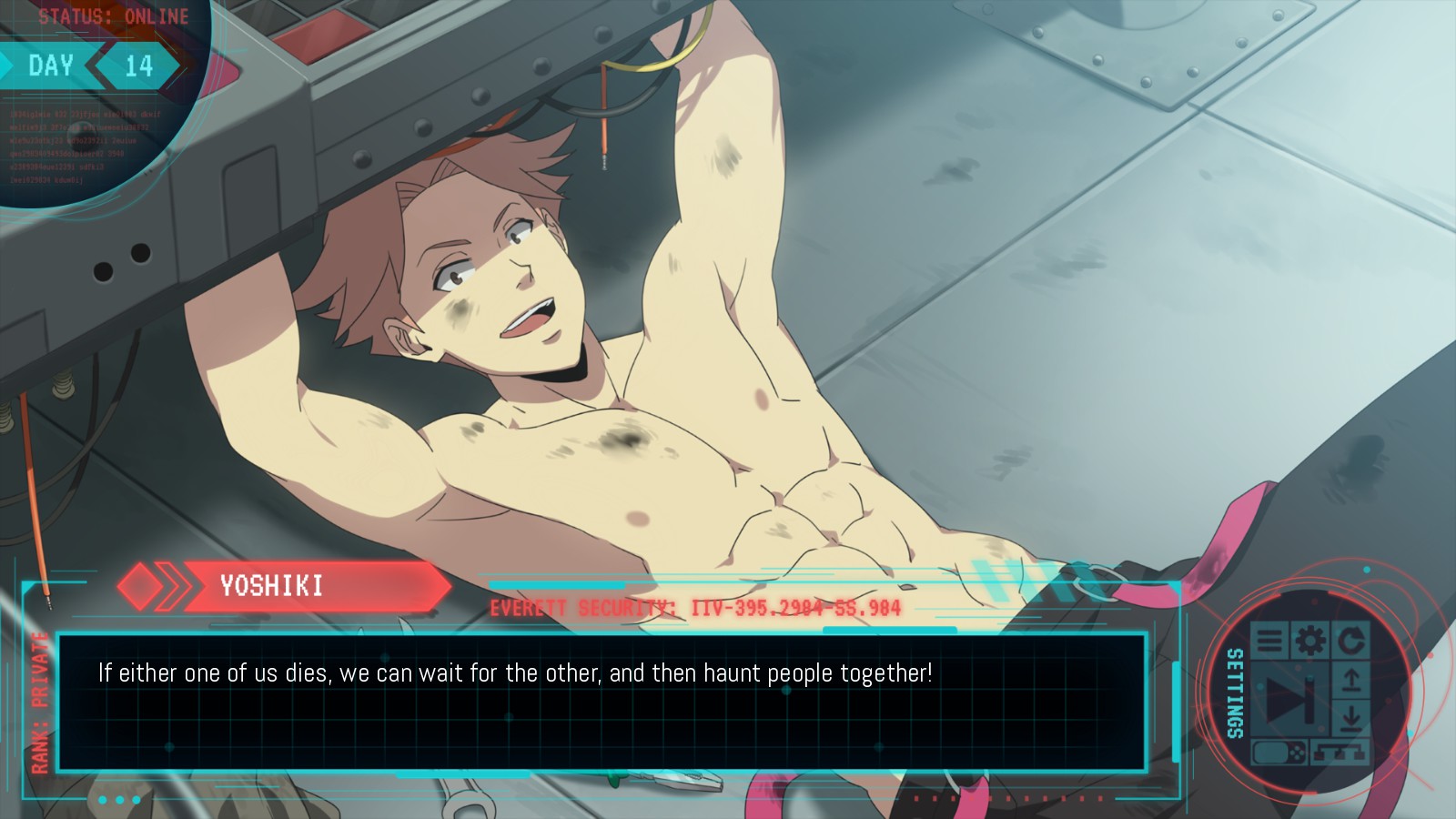 Also, to actually get an ending where you don’t die, aka a romance ending, you do need to go through enough routes/deaths until you figure out what you need to input so there’s that. While it is kind of annoying that you have to go through most of the routes to really get an ending, I really appreciate the developer doing the game’s routes this way. It makes this aspect great as it encourages you to interact with the characters more and learn more about them.

While this isn’t exactly a dating sim, there is a focus on romance. In fact, every route will end with you getting with one of the romanceable characters. However, this doesn’t go down like how dating sims usually do. Instead of basing who you’ll be aiming for (and whether you succeed) on your interactions with them and how well they went, Quantum Suicide’s is more route based. So whoever you’ll end up being with is determined by who dies. By the time the route branches, you can pretty much tell who the route is pointing you towards. This can end up disappointing some, as you can get sweet moments with characters, but your decisions will put you down a different romance route. Some also have their own preference so you might just get friendzoned forever. It is an interesting way to approach it, and it does play a part in one of the character’s romance route and to a secret romanceable character (though it’s very… anticlimactic). 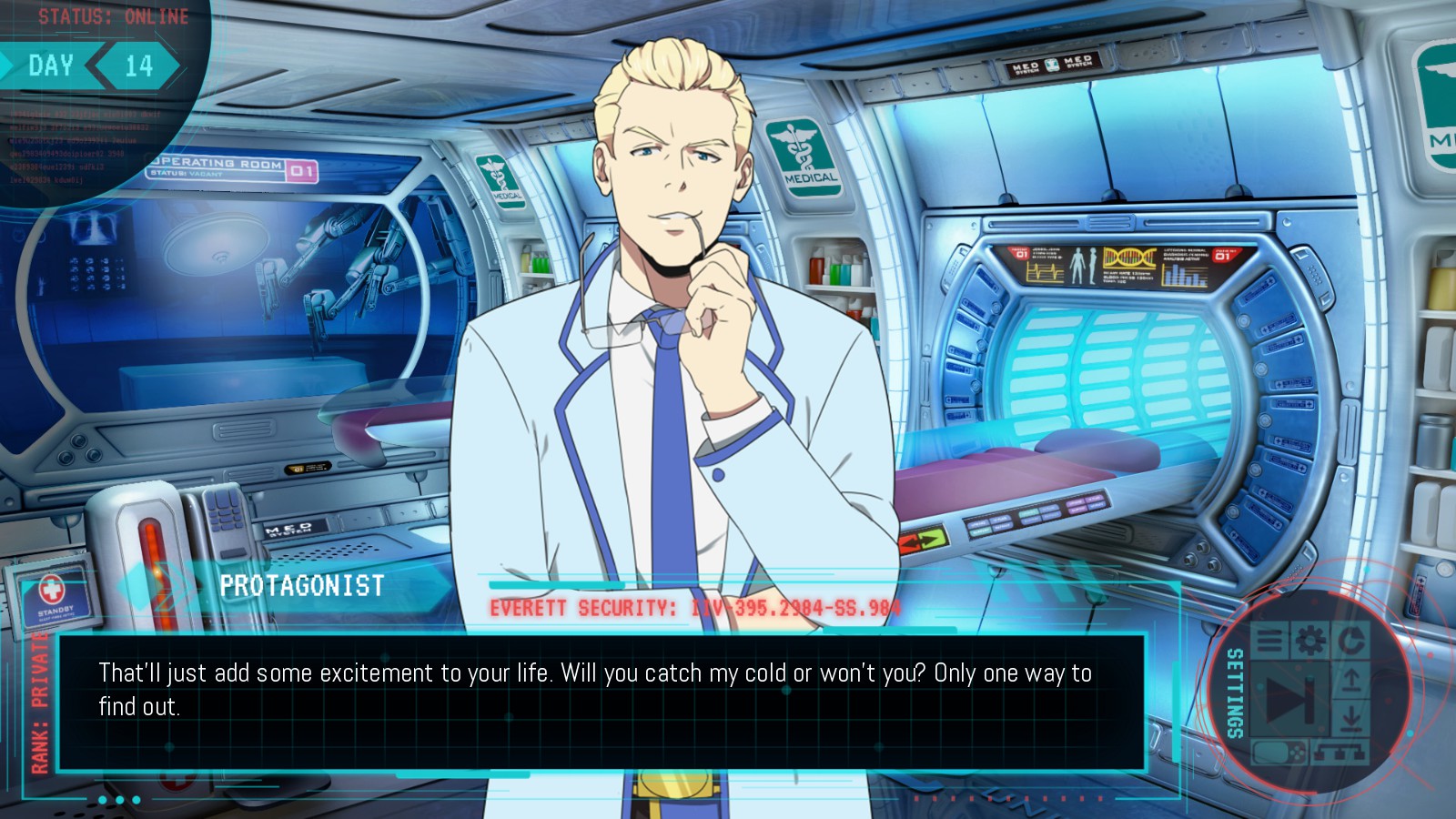 Quantum Suicide is, mostly, fully voiced both in English and Japanese. I mainly played with English audio, with switching to Japanese to see how it was, and both are good. Easily the best one brought on was Ai/Dai’s English voice actor, as she really brought personality to them and had them distinct from one another. Though while Vladimir’s was also good, his audio was muffled all throughout, which wasn’t pleasant. And while I didn’t listen to much of the Japanese audio, the only complaint I have is that it did throw me off how Ai/Dai has the same voice actor as Beatrix. Granted, Ai/Dai’s English voice actor also voiced Sora, but Sora is taken out early, both characters really only had one scene together (and even then, weren’t speaking after each other), and I wouldn’t have known it was the same person if I didn’t check the credits. 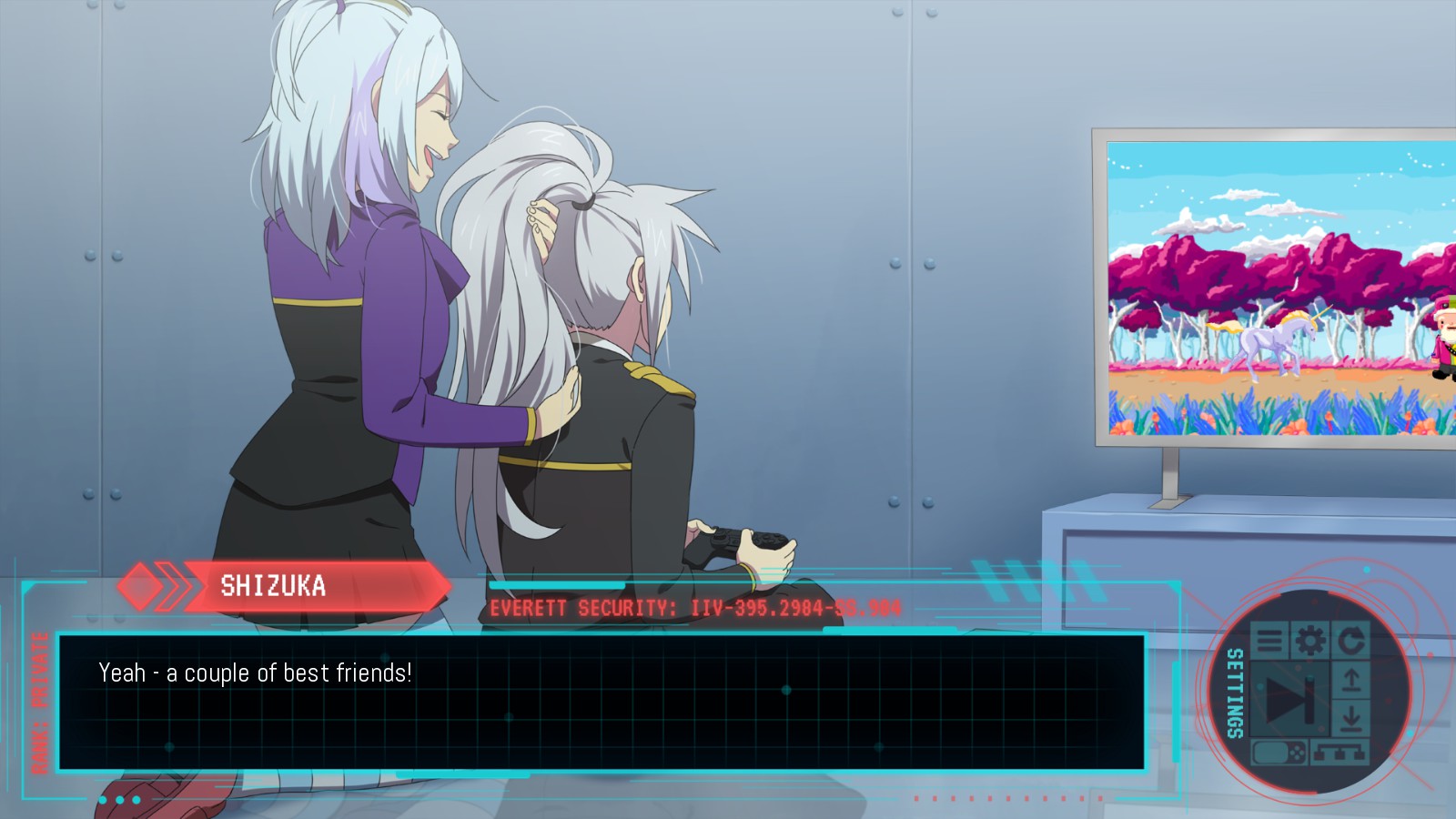 I did run into a couple mistakes and bugs, but overall it was a smooth experience. There were some voiced lines that were cut off too early, some didn’t match with what was written in the text box, some lines got in a repeat loop (repeating for, I’d say, maybe eight times), I remember one line that was supposed to play in a different choice route play outside of it, a reaction during the Bidding Wars Deletion Game played twice (with one of them actually being where it’s supposed to be), and during Bidding Wars there was a choice (or two) that didn’t match what the game said you inputted (selecting a 4,2,2,1 will convert it to 9,1,0,0 on the results screen). These aren’t that bad (even with the wrong input, you can still get all route possibilities) though, with some just causing a couple seconds of annoyance once you get to them. Though, the developer has been making efforts to fix any bugs or problems that might pop up. After taking a quick look at the patchnotes that released before I started playing, I can say that they were indeed fixed, so any complaints about bugs early on have been fixed for the most part. 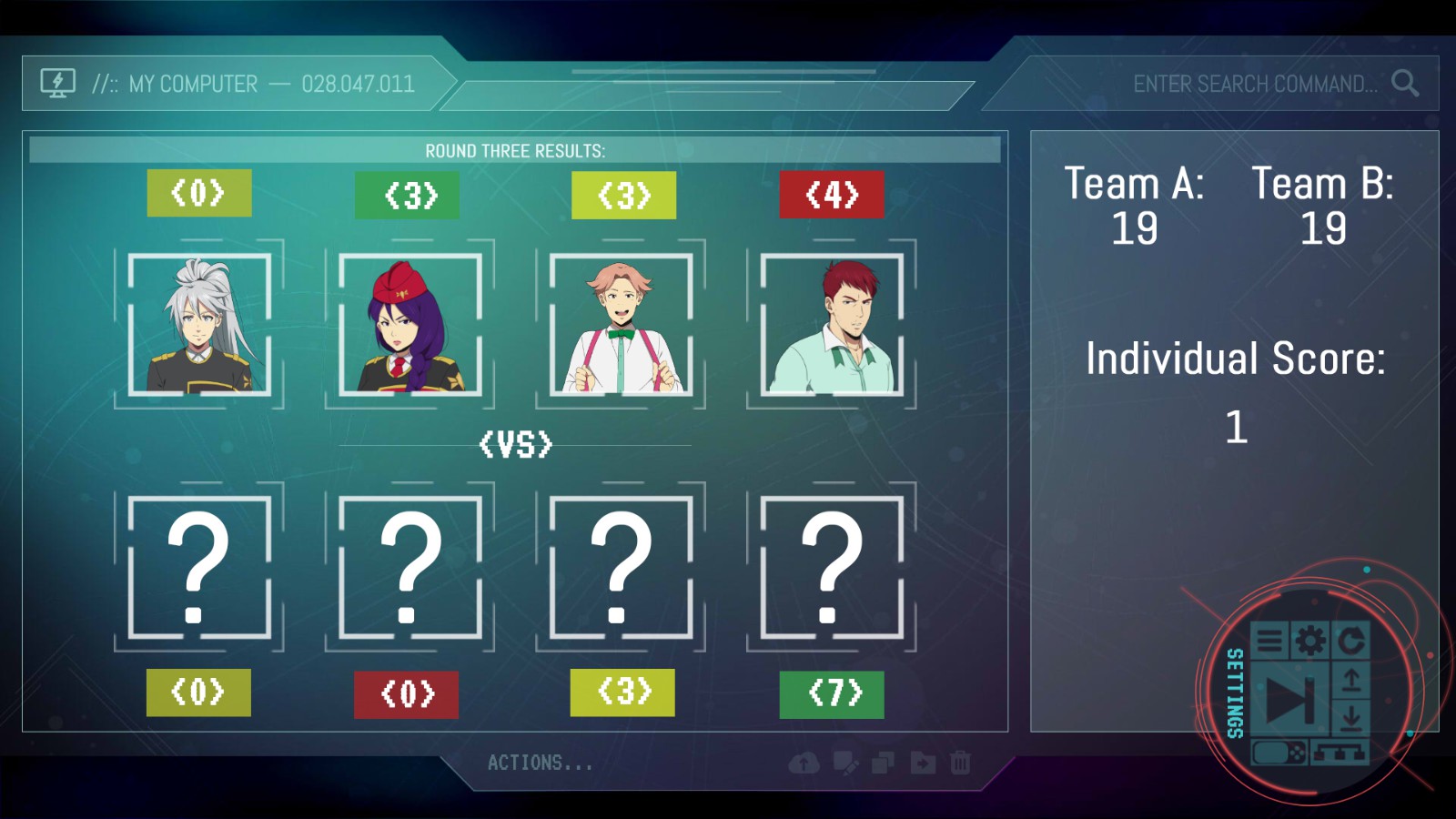 There was one inconsistency story-wise, though. For the Bidding Wars Deletion Game, you’re told that if both teams are tied by the end of three rounds, both team captains will be executed. Well, you can actually get the scores to tie, but it will default to your team losing. It would have been nice having a scene play out with this rare outcome where Dai is surprised and excited that a tie actually managed to happen. 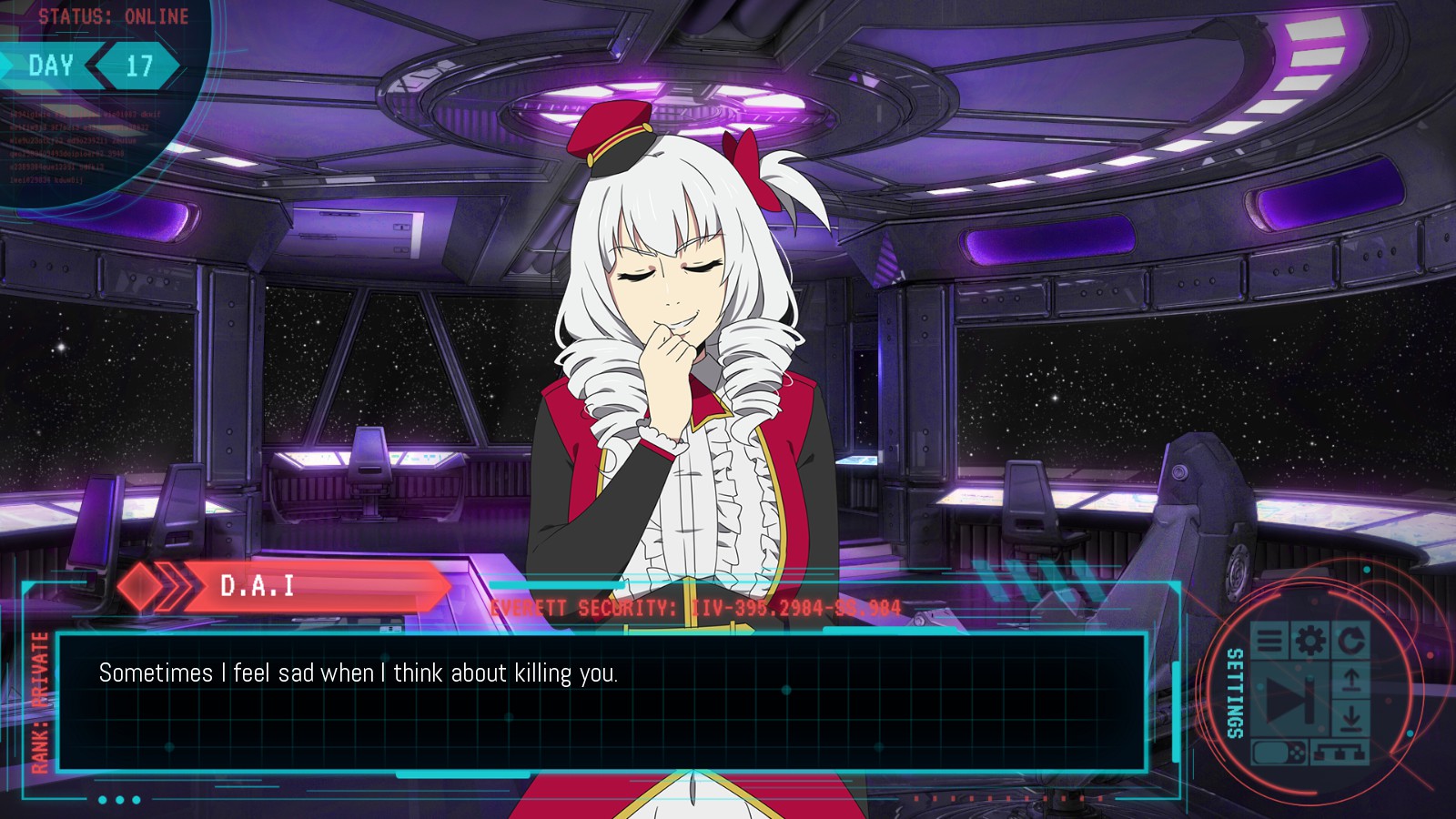 Overall, I did quite enjoy Quantum Suicide. It did have a weird way it handles the dating aspect (it helps if you’re not really going in for it), some endings were a bit lackluster, and there were some small annoyances, but this does have highs that balances it out. The story was interesting, especially with how the different routes play into the story and how it brings on a mystery that you can actually trace where it started, the characters and the interactions you have with them are great, and routes are different enough to go through again. So as long as you’re not expecting something on the level as Danganronpa or Zero Escape, just a piece of work that was inspired by it, this will be an enjoyable experience. Quantum Suicide’s length will, of course, depend on your reading speed. As a fast reader I believe I was around 6 hours until I hit a dead end (which in this case, means I had to start going through other routes) and was at 22 hours after 100%-ing the game.