An Indie tower defense shooter that provides functional gameplay, however proves to lack depth and global progression elements. A decent title, but nothing more.

Ultimate Zombie Defense (UZD) is a solo and co-op top-down tower defense / shooter hybrid set during a zombie apocalypse. Players impersonate a member of whatever military force is still present after the infected overran the world, and are tasked to hold out as long as possible against the endless hordes of monsters coming their way.

Humanity’s Last Stand
The gameplay of UZD focuses on the deployment of defenses against the increasingly massive hordes converging on the player’s position. In this aspect the game works quite well, as the fortification of a given position with increasingly durable defenses, turrets, traps and utility stations proves satisfying. On higher difficulty enemies deal significantly more damage to one’s barricades and tools, so smart money management and efficiency become priorities. The balance is overall fair enough, though it could use more cash gain in the first few waves.

I trained for this!
Each of the four available classes can be leveled separately by completing sessions and earning XP in turn. Playing in co-op and focusing each player on a specific task works well as a concept. The diversity of skills allows focusing on a specific category of weapons or buildings: for instance the Engineer has more resistant defenses – while the Specialist has increased effectiveness with Sniper Rifles, or the Medic can deploy a unique healing station. Overall most perks result useful to invest into. 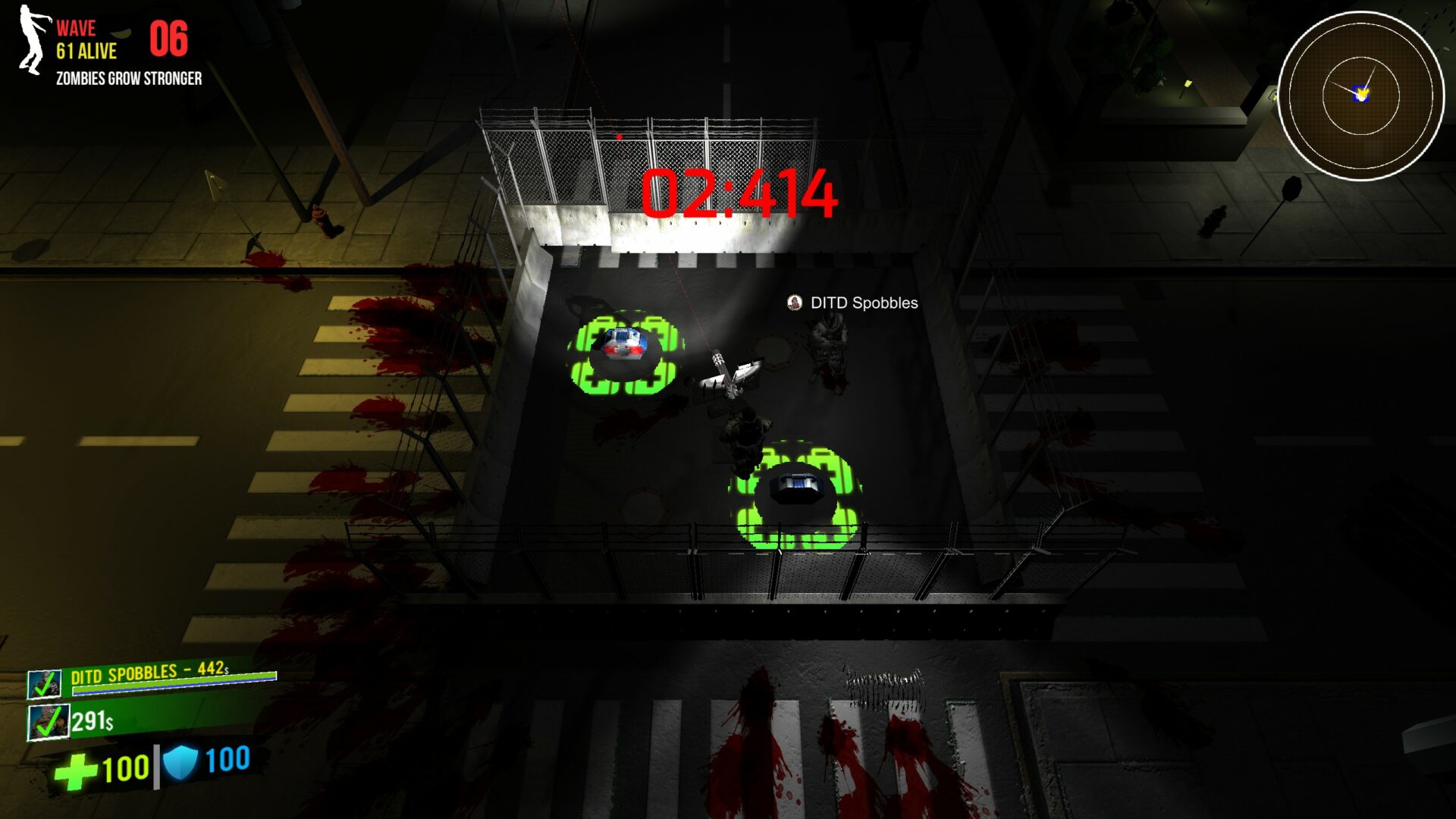 Deep as a puddle
UZD’s biggest flaw is ultimately its lack of depth in the overall game mechanics. Other than holing up in the corner or location of choice in each map, there isn’t much else to do except killing enemies and building defenses. No random events or drops to encourage exploration, no defense upgrades, no active skills for each class either. The gameplay formula may work on its own, but results plain and without evolution in the long term, both in the single matches and global progression wise. Moreover, there also aren’t any new defenses, weapons, maps or anything else to unlock down the road.

The great grind
Each class levels on its own after completing a match with it. Greater difficulty yields more experience, which is however not shared as each player’s kill counts for themselves alone. Considering it takes something like 20 levels to acquire enough Skill Points to max out a character, and after the first few level-ups it will take 3-4 runs to wave 10+ on Hard to level – many more as levels increase – ultimately this process becomes a grind. The progression pacing is totally out of line compared to the scope and content of the game itself, as there isn’t anything else to go along with it, or any reward.

Design oversights
Nobody would expect flawless AAA quality from a budget Indie like this one – up to a point however. There are some design flaws not depending on budget constraints, such as inability of giving teammates money directly, having to re-make the lobby each time a match is concluded (and re-invite everyone manually), or players inexplicably being able to pass through large solid objects across all maps. The camera angle penalizes any defense that shoots downwards, as view range is worse in that direction. An indicator of what enemies or bosses are coming the next wave is also missing. 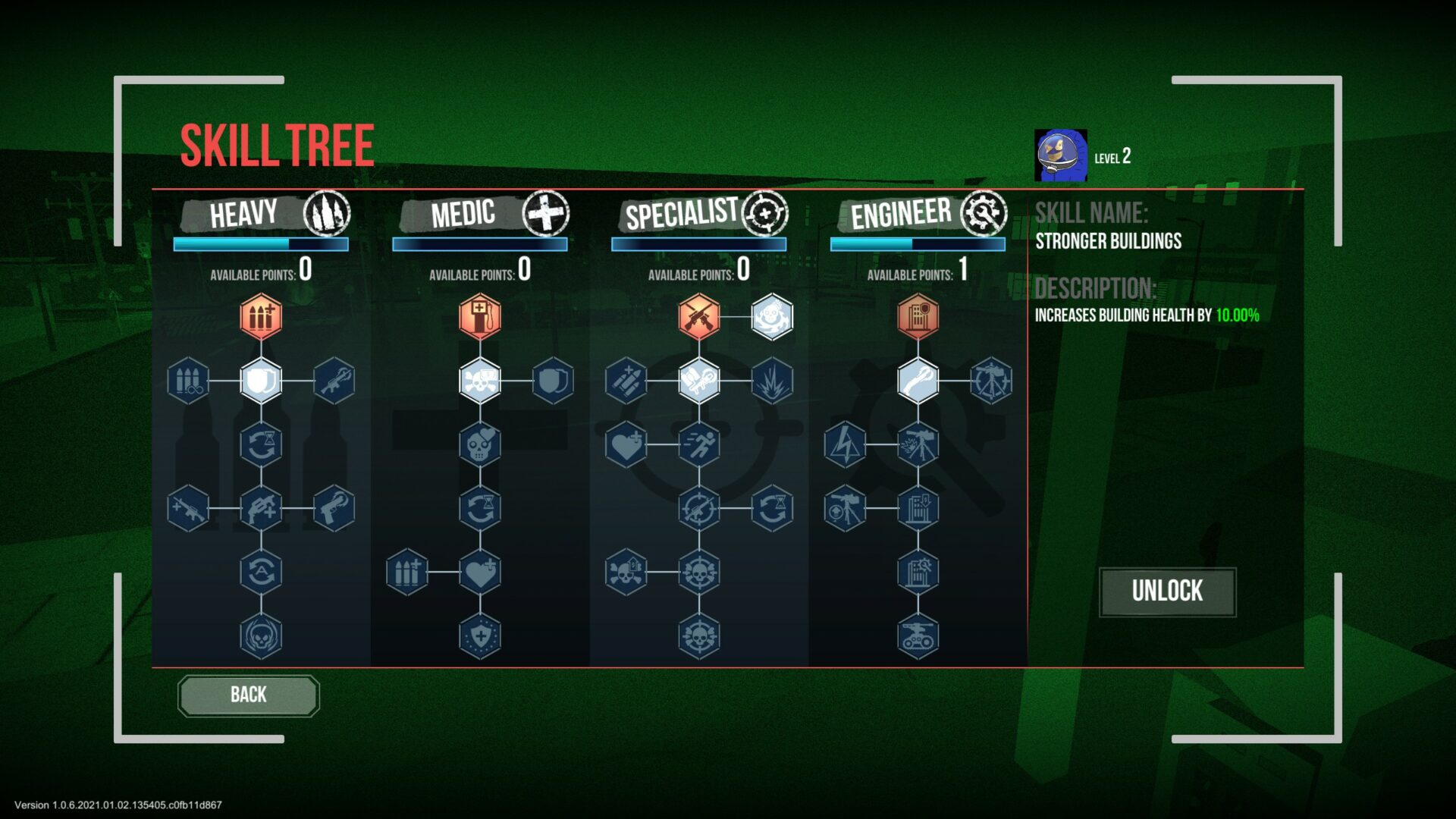 Exploration
Is performed on foot, across fairly small maps. There is absolutely no point in exploring a map except finding a good location for setting up the defense, the first time one sees that map. For the rest, there is nothing of value or interest to speak of.

Defense Setup
Is performed via a menu that enables selecting what to build, and then place it on the ground following a grid-base positioning system. From cheap but fragile wooden barricades to military-grade walls, turrets and ground traps such as mines, there is a reasonably variety of tools to fend off the zombie hordes. Enemies can damage and destroy defenses, which can however be repaired between one wave and the next, during the preparation time (three minutes). It is rather disappointing being unable to upgrade defenses, which is a common element of such games.

Combat
Plays out in a top-down shooter style, where players can use either character weapons or fixed emplacements (like the minigun turret) to lay waste to the enemy. Some defenses do allow shooting through them, while others don’t, testing them is the only way to know for sure. Certain weapons may fire at an angle too low, thus unable to shoot through even low defenses. In general, staying out in the open means certain death past the first few waves, as enemies are usually faster than players and come from all directions. Deployable ammo boxes can refill munitions, however also deplete.

Character Management
Is performed during a match, in the form of selecting weapon upgrades, buying weapons and managing supplies through the Shop, or in the dedicated Skill Menu after a match is completed. In the latter one, players can use earned skill points (one per level-up) to unlock new skills or upgrade existing ones to a better level. There are only passive talents and not any active perks to speak of. The last perk in each tree is usually a sort of “ultimate”, very powerful in effects such as the Heavy’s “Berserker” allowing him to deal +500% damage when on low health. 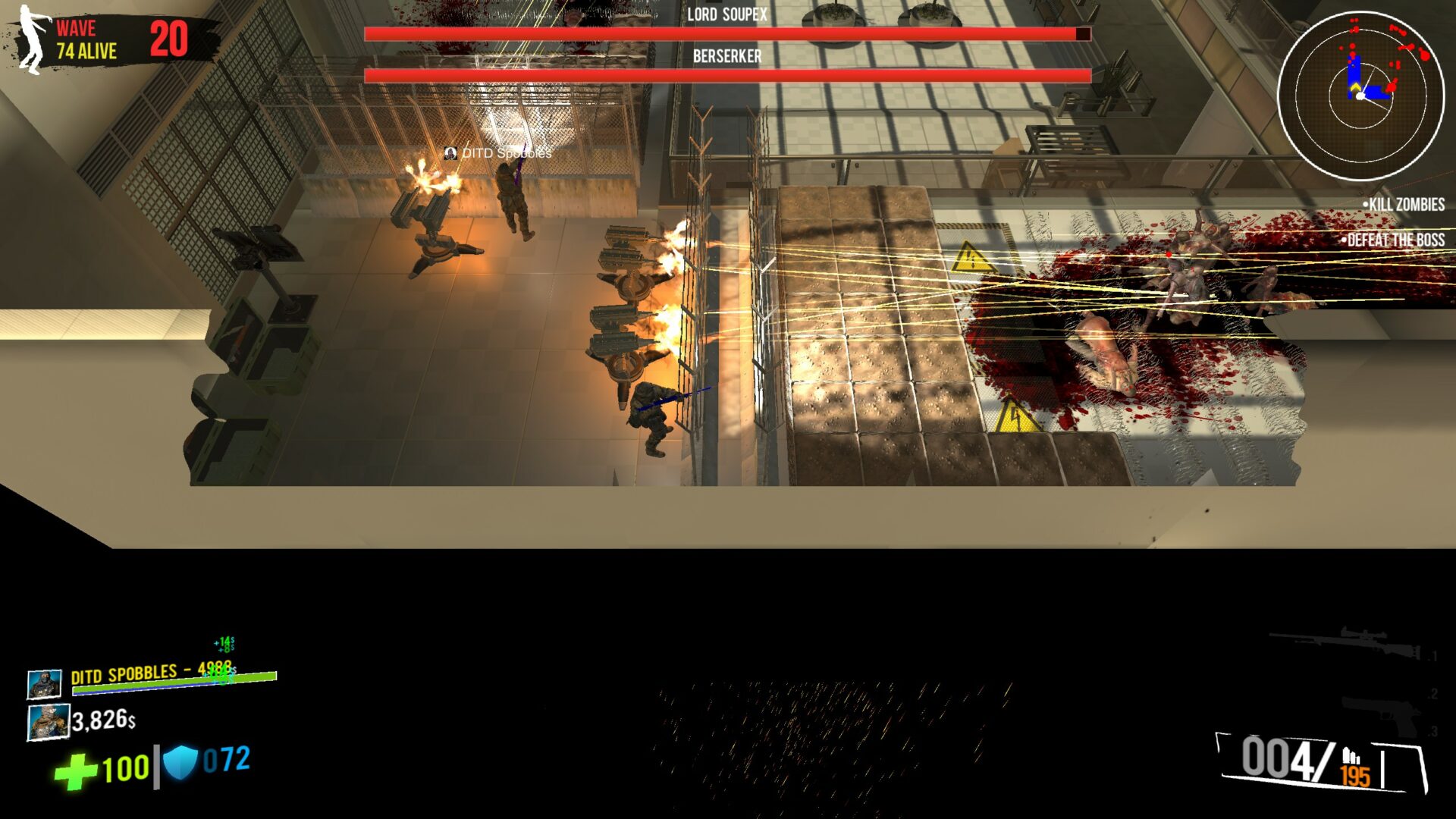 Bugs & Other Issues
– Enemy path-finding can break in some cases.

The game doesn’t have a real ending or final target, as waves are endless and each match standalone. It took me a little more than 3 hours to unlock all achievements and play at least one or more maps on each difficulty. The total amount of content is what players make of it. For the price of 3,99€, which is fair, I do recommend the game for full price.