She got over 70 Problems but Sex ain’t one

Or so it says. First of all, technically it’s a finished game in the sense that you can play it from start to finish with over 70 enemies and over 200 sex scene animations. But there’s more to come like fluids, animations, character customization function, etc. in 3 Phases.
I’d like to give props to the developers for being brutally honest about what this game is all about and I just have to quote it here!
Pre-sales statement:
This is a pure adult porn game, not ACT, not RPG, and no open world. If you are looking forward to the excitement of action games, in-depth combat system, epic stories, movie cutscenes, and open-world exploration, please Do not purchase this work.

What we’re going to look at is the current state of the game and what it offers.

The story is very simple, Enemies are invading and the Protagonist, presumably a sword-swinging princess, offers her help to fend off the invasion. In between slaughtering enemies and getting boned she also takes on a few requests. Many of them are with a comedic tone and show that it doesn’t take itself seriously.

If there’s one aspect I have to mention is that this Enemy Force might the most diverse I have ever seen. It’s reminding me of one of those silly doujins about Dynasty Warriors where the grunts were fed up being slaughtered en masse and therefore combined their forces into a new group. 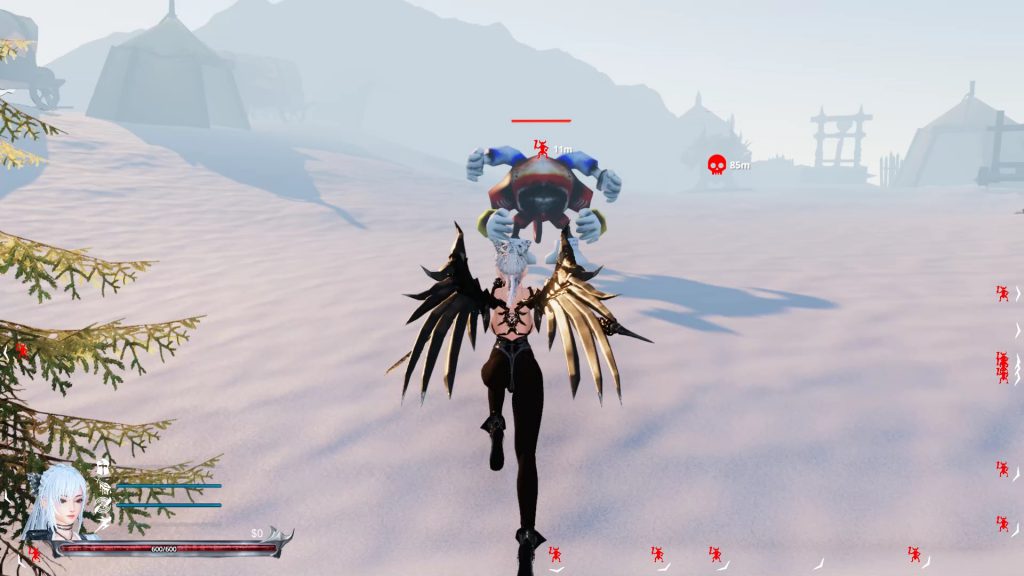 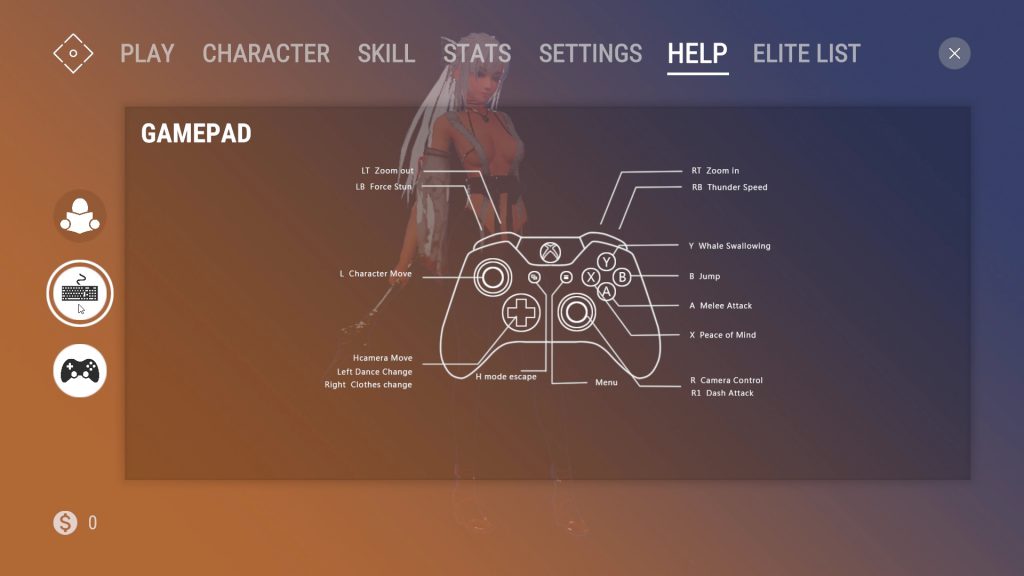 This is a strange one as the game says that the X360 controller is supported but it shows the Xbox One Controller. I have not been able to use the Xbox One controller at all. To be honest, the game is so simple I wouldn’t even recommend taking out your controller for this. 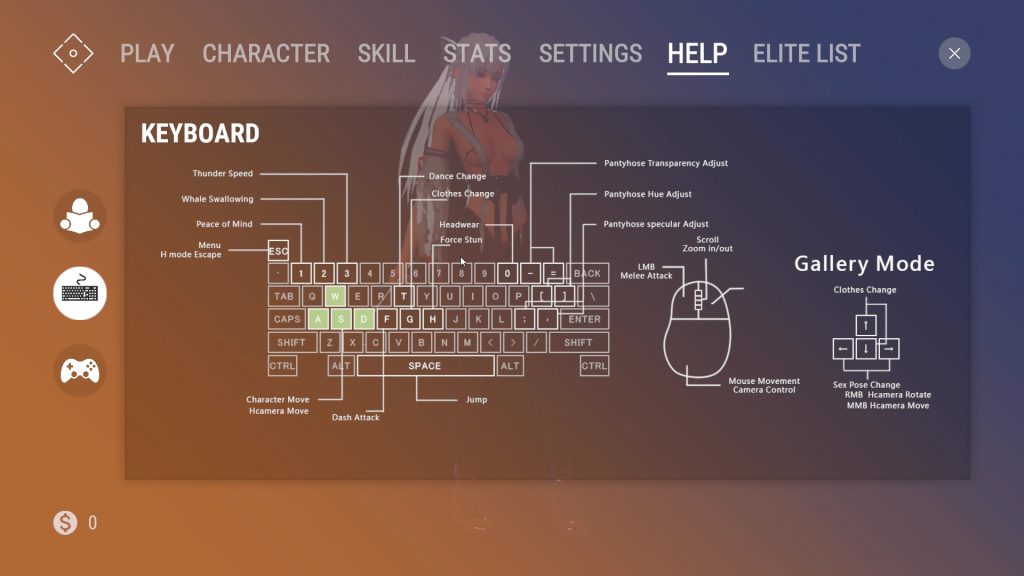 Gameplay as a means to an end
The game starts at the final bastion of humanity also known as… The Town. From there on you can take on a few sub-quests and enroll in the fight against the invasion. There are no shops in this town as everything is done within the Menus that are available at any time. 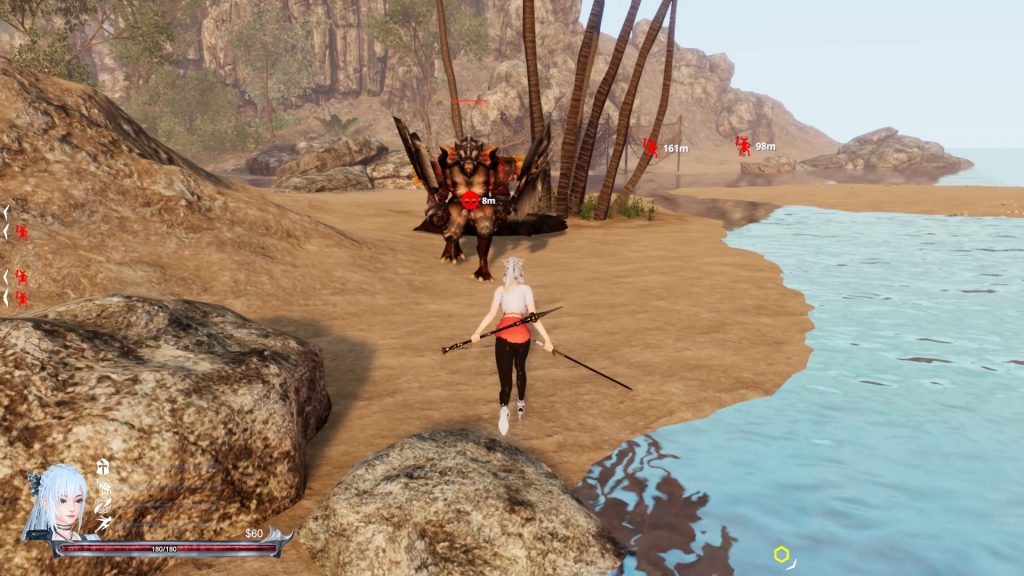 There are multiple goals for the player. Defeat enemies to get money for upgrades hope for them to drop costumes and weapons.
How does fighting work? Your character has a simple 3 attack sequence and you can amplify her with 3 skills that have cooldowns. Improved Defense, HP Drain, and faster Attack Speed. Besides, a special Dash Attack is faster than your normal run speed.
There are no hit animations. The only things that activate an animation are either you running out of health, the special stun attack from an enemy that precedes the r*pe, or their death.
For those who do not want to wait for the stun attack, you can just activate the stun by inputting the H(entai) key. Possibly the most important key in the game. The action itself has no utility and you can exit the animation with the Escape Key at any time.
You can also not die in this game. Once your HP is at 0 you automatically resurrect so your winning is just a matter of time. Increasing your stats and skills just helps you achieve victory much faster. Fight the boss and finish the stage.

Sub Quests, Money, Weapon and Costume drops
Simple fetch quests that reward you with 100 bucks each. That’s a lot in the beginning but becomes completely negligible when you can defeat the 2nd Boss repeatedly for quick cash.
My advice is to take on the sub-quests in the beginning for a faster start and then you farm the bosses.
There are 10 Weapons with different designs but progressively stronger. You get those by defeating grunts on the map. 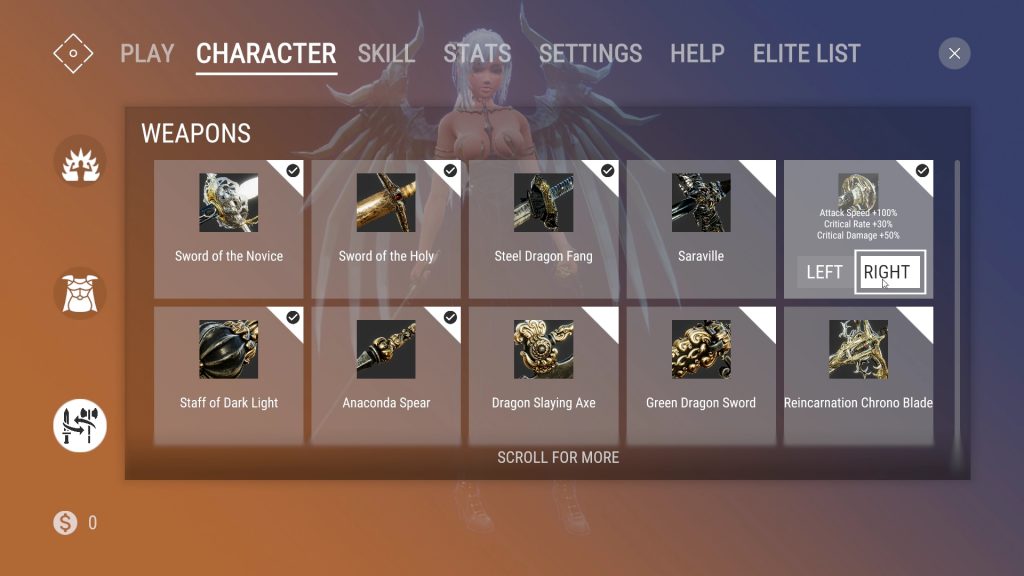 Another important drop is purely for eye-candy, which is the over 20 costumes. No need to search for nude because it’s available from the very beginning. 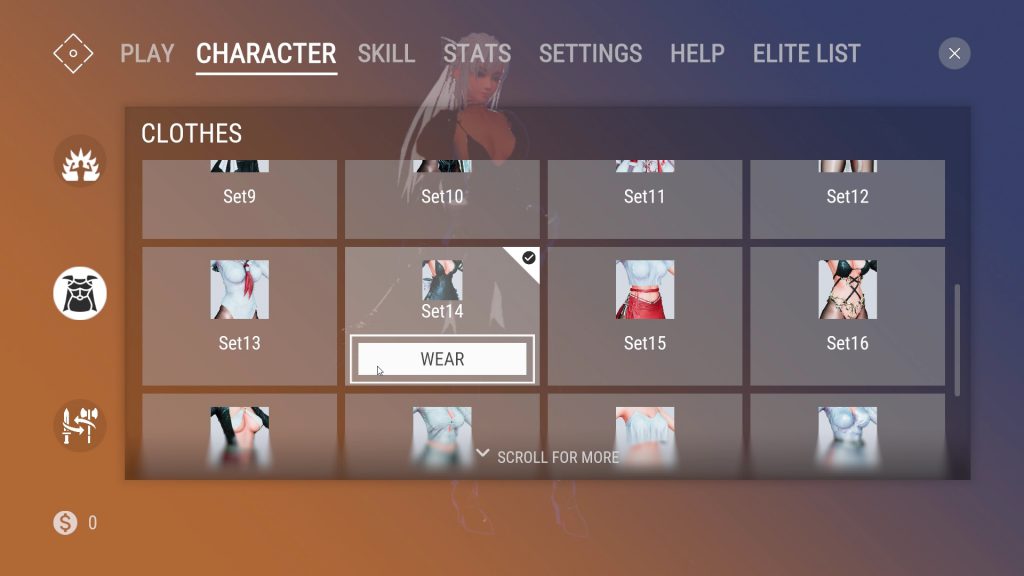 A matter of endurance or Auto Clicker 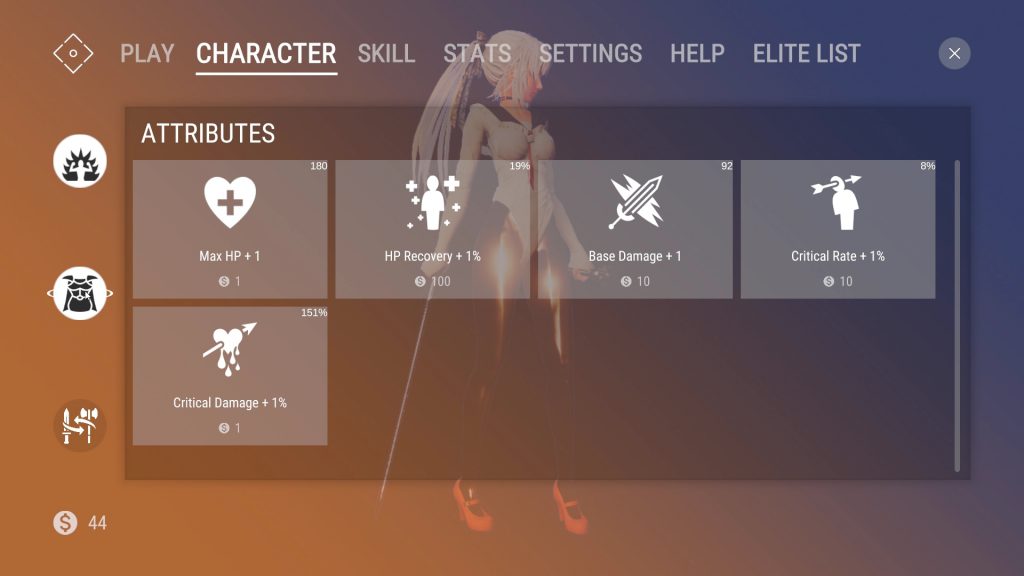 Here’s the thing, Sword x Hime has a very simple stats system. You convert money into different stat ups or improve certain skills. Things like Max HP, HP Recovery, Base Attack, etc.
The costs range from 1 to 100 and this is where your endurance comes in. Imagine you have 5000 bucks and want to level up your Max HP that costs 1 for 1 HP and requires 1 click each. This means you can buff your Max HP by 5000 with an equal amount of clicks.
Take my advice and just get an Auto Clicker when the time comes for this. 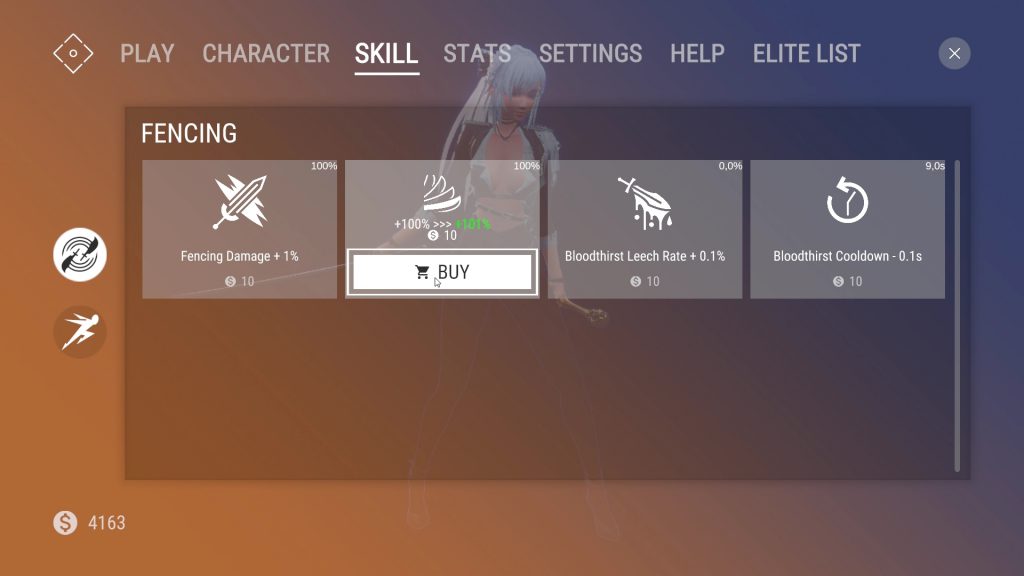 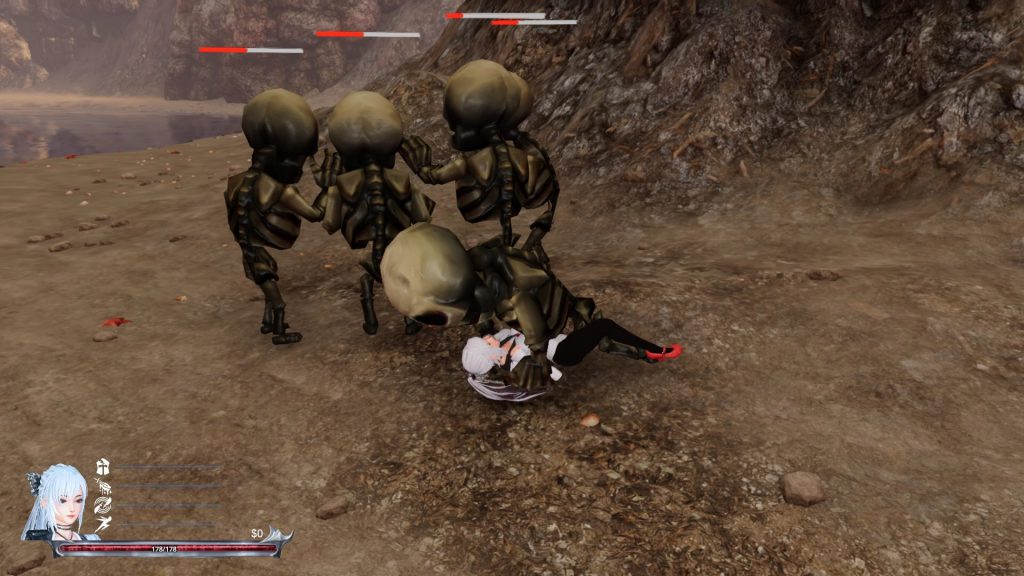 This is what most of you’ve been waiting for. The game is in favor of quantity over quality. With over 70 Enemies that have animations ranging from a single one up to 4 or more, I can confirm that there are at least about 200 separate animations BUT that’s only if you look at each animation as a single entity.
Here’s the thing, most of the time one of the animations is just a sped-up version and sometimes there’s a third step moving onto the climax.
I wasn’t able to find a smooth transition between these animations that should be linked together or maybe it just takes longer. The reason why I suspect that they are implemented as separate animations is the fact that when you disengage and re-engage you get the faster animation.
There’s no interactivity and you only get 1 on 1 situations. Supposedly more fetishes are coming with free updates. 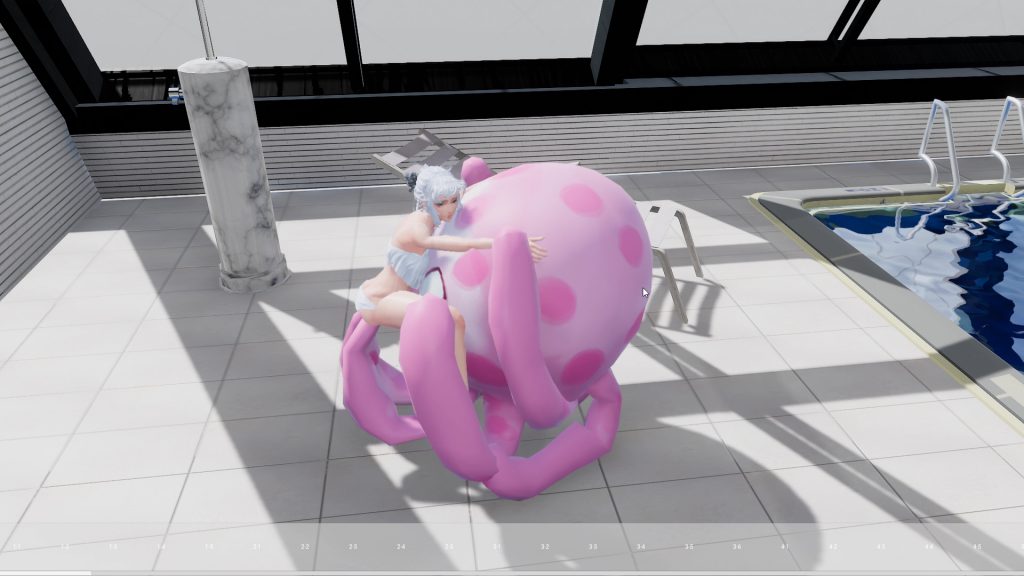 It’s a simple one where you cycle through all enemies and the animations you have found.

What to say about the graphics? In terms of environment, it’s really simple and nothing to talk about just like the gameplay. It’s there for you to fight your enemies.
The Protagonist seems to be the most detailed out of all and female enemies are also looking partially better than the other counterparts. While talking about the other grunts, the visuals are wildly inconsistent when it comes to their visual style. 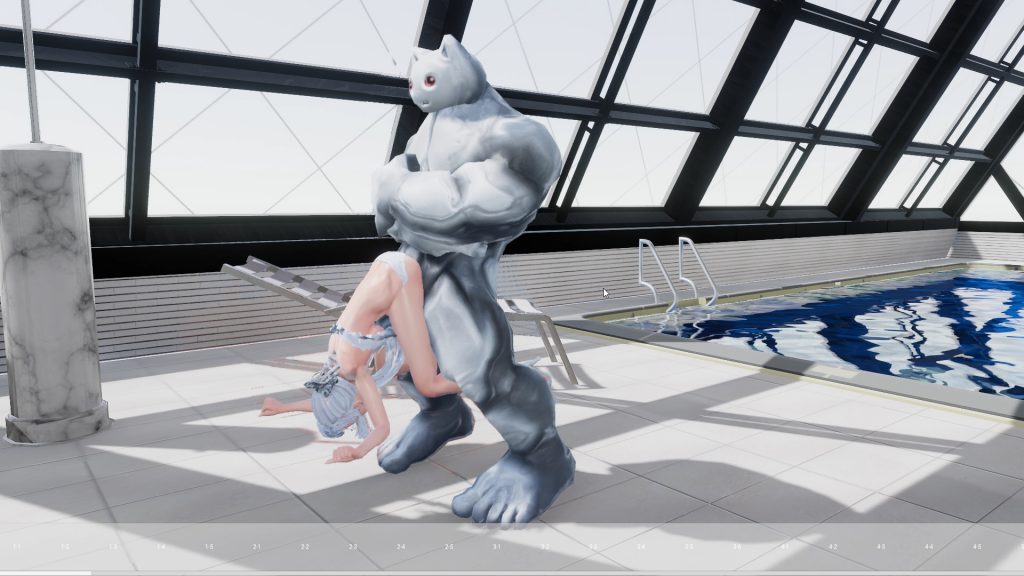 It feels like the developers were getting store bought assets and slapped a dick on them. To be fair, I think the lewd scenes are where they did most of the work. The enemies come in different shapes and sizes so you can take a guess how much work it is to give these over 70 enemies different, and more often than not, multiple animations.
There are some instances where the boner is (painfully looking) curved to match the positioning of both characters but what do I know. Maybe it’s just an alien thing with deep lore. They also only have two attacks so there’s comparatively less work involved than the lewd stuff.

The music is surprisingly ok. The sound effects are on an acceptable level with a little bit of Japanese voice acting, moaning from the protagonist, and some slapping sounds.

Is it the ultimate sex scene experience? Not really, as it is right now it opts for quantity rather than high-quality animation. One would even have to ask whether the gameplay is needed, as there’s not much to it anyway and the deeds are just scenes without any interactivity.
Overall, considering the moderate pricing and that there are at least 3 more updates to come, I’m giving it a Save for Later. If you’re looking for a big short collection of short lewd animations you might want to give it a shot.