This sidescroller looked promising, but ended up a bit disappointing for me.

On a Journey to Slay the Demons, Sword and Shield in the Same Hand

I don’t usually like to dump on a game, and I try to be objective while reviewing them. Even if I don’t like some aspects of how a game is played, I can also acknowledge it’s one more game than I have ever made. But there’s also sometimes a limit to that, and The Skylia Prophecy tests or breaks that in a lot of ways for me.

The Skylia Prophecy is a Castlevania styled game set in a world plagued by demons, featuring 2D action in a gothic setting. This kind of game obviously holds some appeal with the developer Ezekiel Rage, who seems to be a one-man team, as his portfolio on Steam includes a few other titles like it. I won’t be referring to anything from them specifically, but I thought it would bring them up as it means he has some prior experience.

The story of the game is that several years ago Mirenia, the game’s protagonist, released the leader of the demons plaguing her world. Now she seeks to undo that mistake by traveling to a distant fortress and casting a spell that will destroy him forever, with a prophecy looming in the background claiming this could lead to disaster. That’s a plot with a lot of moving parts to it, but it’s told to the player in probably the least interesting way possible: white text on a black background, scrolling upward. Thus far Mirenia is a silent protagonist, so the fact she has this backstory fell flat for me a little. 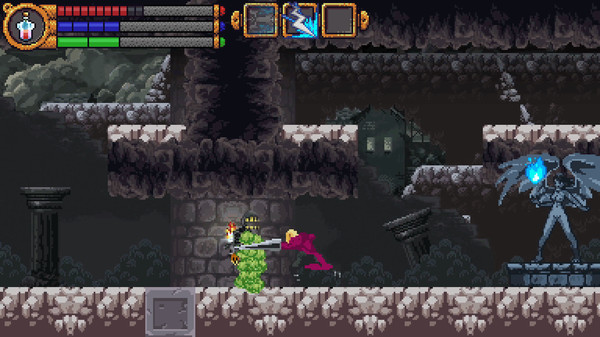 Skylia’s gameplay is about what you’d expect from screenshots: you move left, sometimes right, and hit skeletons, bats, ghosts and other spooky enemies that get in your way. It has some odd quirks, however. For one, Mirenia can swing her weapon – a blade strapped to her arm that doubles as a shield – in exactly one way, a simple slash straight across. She cannot swing it in any other direction, including down, which can be an issue when things come from below or above. Your tool to remedy this is a barrier Mirenia can send out which also has offensive properties, damaging anything that walks into it as well as blocking projectiles. Quite a few enemies shoot projectiles and do so pretty often, so having a tool to remedy that is nice. But I still feel a bit foolish when the only way to get rid of a tiny enemy is to let them effectively walk into a bug zapper.

Another strange decision has to do with the game’s controls. You might expect me to say they’re loose or don’t feel right, but they’re actually pretty tight and have the physics you’d want from this; if you press left or right Mirenia responds right away, same with jumping and attacking. But first you have to find out how to do those things, as the game doesn’t really tell you. Just about every game I can think of at least shows the button prompts for controllers at the worst even if they don’t feel like dirty keyboard users deserve to know their controls, but here you have nothing, besides it saying in the options that every action has a specific button for it, something I’d think would be obvious. 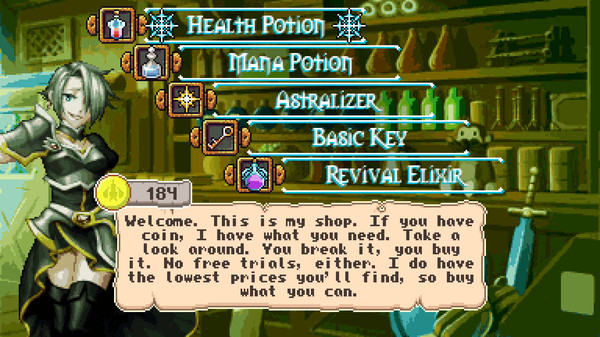 How it saves brought me some trouble as well, since the game doesn’t auto-save and only records your progress at angel statues you’ll regularly find. You only have one save file and sources of health are a bit stingy (restricted to health potions that you can only have one of, and medics in some towns) so when I ended up saving my progress in a dungeon I couldn’t leave with just two hits left I was sort of up a creak, since these statues don’t restore health. I mentioned this to the developer though and he seemed to agree they should, so this will fortunately be changed.

There are some other things about the game that seem a bit unpolished. As I mentioned, numerous enemies shoot projectiles, but how they behave often feels a bit off, either by persisting for a bit too long or being fired in a massive density. The boss I mentioned was a problem mostly because it dropped a barrage of skulls when damaged that were fired so randomly it was almost impossible to avoid damage at times, and he took a pretty large amount of punishment for a first boss, more than ten hits. A regular thing you have to do in the game is walk up to an exploding barrel that can kill you, use your barrier to detonate it, and then quickly jump away before it kills you, which never feels right. Some enemies also deal way more damage than others on contact, which can feel frustrating if it ends up costing you a potion or a bunch of time. 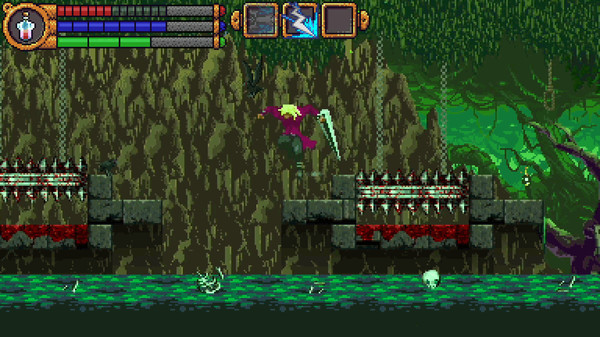 As I mentioned, I don’t really want to bash games when I review them, and the Skylia Prophecy doesn’t feel like an entirely bad game. It has some things going for it – the environments are very pretty to look at, featuring nice backgrounds and stuff like wind blowing through areas. The moment to moment gameplay is also decent, most enemies are simple enough but feel fun to cut through. But there are so many weird decisions to the game that make it feel like a first project, even though it actually isn’t, which makes me hesitate to recommend it at full price, which is a full twenty dollars. If you’re interested in it I’d suggest waiting for a discount, or to see how the game is updated. I give it a Pause.