While aesthetically and visually pleasing, functionally this rose has far too many thorns.

I’ve sunk hundreds of hours into turn-based strategy games over the years, and both steampunk and Japanese culture are near and dear to my heart. Being connected to some of my lifelong favorites, SteamCity Chronicles – Rise of the Rose sounded right up my alley. Unfortunately, despite the game’s many charms, there are some significant detractors that make me hesitant to recommend it, even at a discount. However, if the developers address some of the larger issues in future updates, it is a game I’d eagerly check out again.

The Japanese steampunk tone of the game is mainly set through the art style and character designs. The maps are visually beautiful dioramas that lean into the Japanese aesthetic well. For example, the city signs are a mixture of kanji (iconographic characters), hiragana (phonetic alphabet for native Japanese words and grammar), katakana (phonetic alphabet for foreign words), and romaji (modern English alphabet), exactly what you might see in a Japanese city today. Alongside the buildings are Victorian Era cars and industrial steam technology. 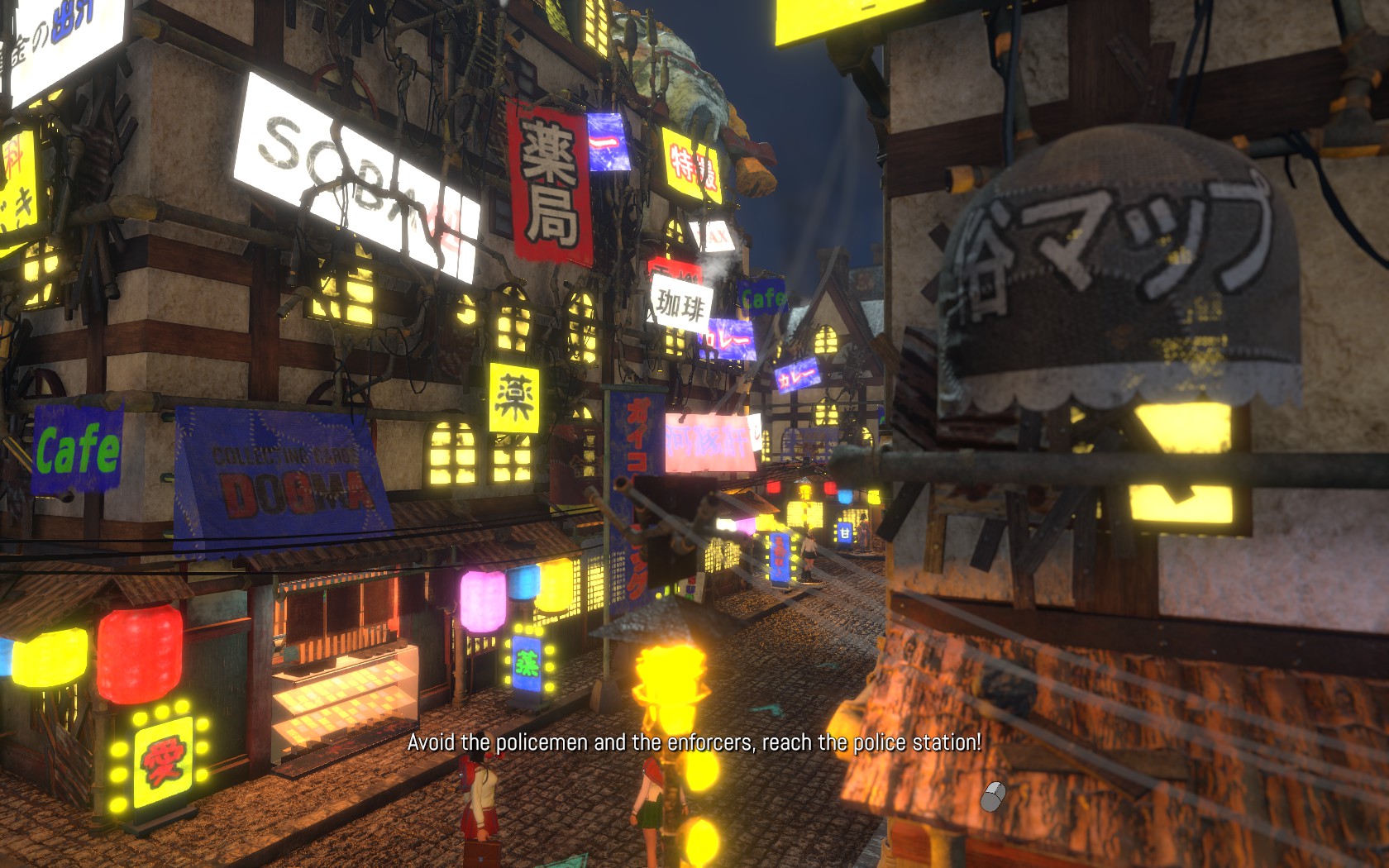 Depending on the character, clothing is either steampunk or Japanese. Steampunk clothing elements include top and bowler hats, flat caps, corsets, and aviator goggles. Japanese clothing elements include yukata, geta, and school uniforms. The design of the Hopkins steam robot is particularly well-done. However, some of the female character design choices were puzzling or even questionable. On the puzzling end of the spectrum, there are characters the game refers to as geishas, but those characters do not appear to have the elaborate kimono or hairstyles one would expect to see with geisha. On the questionable end of the spectrum, the named female characters’ body proportions and clothing seem needlessly sexualized. For example, a thong doesn’t really seem like the most sensible wardrobe choice for guerilla warfare. 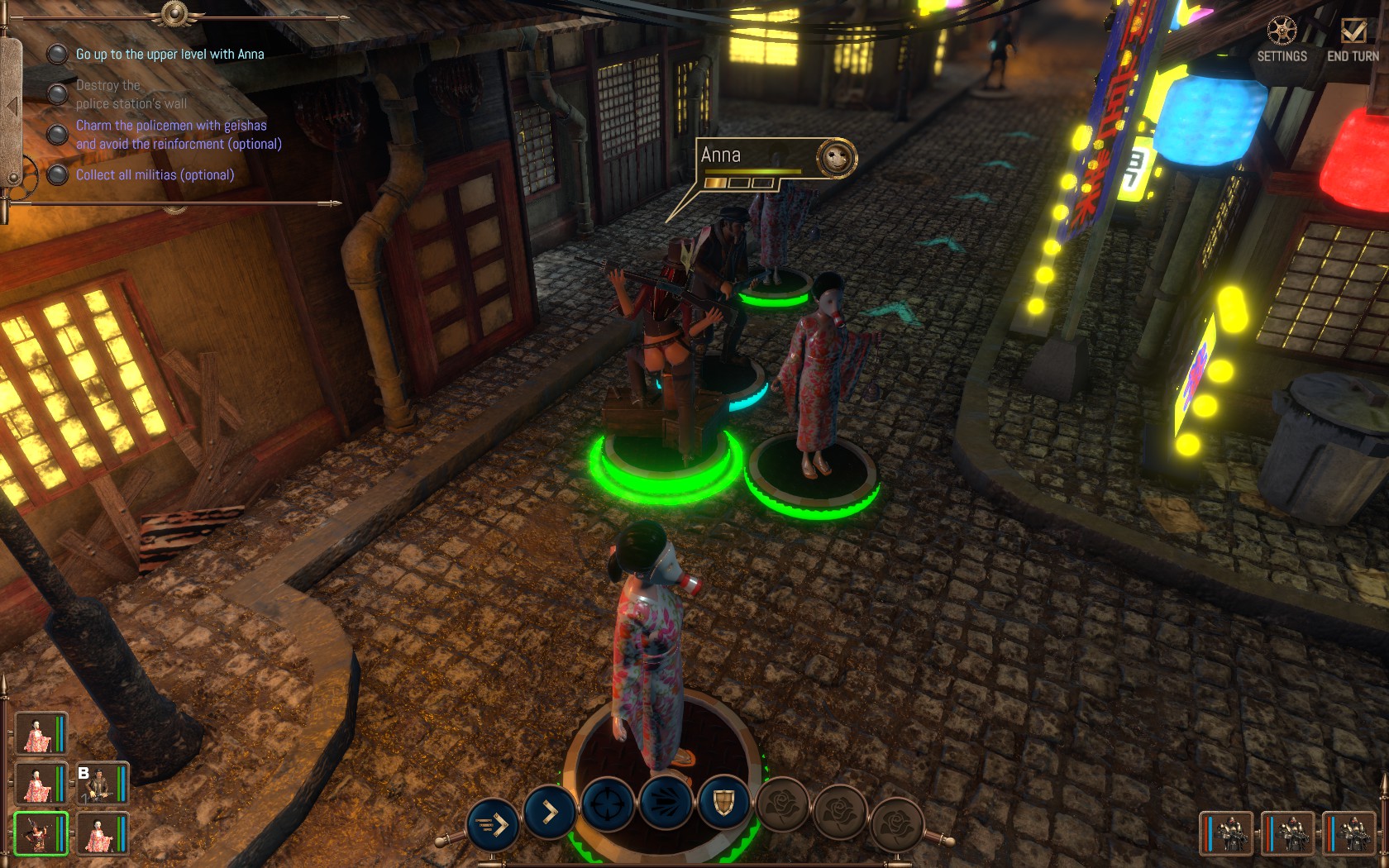 To get a general feel for the game, I opted to play on easy difficulty. Each chapter’s map is set up as a three-dimensional model like a tabletop miniature game with each character unit represented by a miniature figure. Each unit has three action points per turn. Some units, like main named characters, will immediately perform their ordered actions on your turn. Other units, like the militia, will carry out their ordered actions after you end your turn, and the computer will move them around along with the enemy and civilian units. Movements like walking or running are animated as sliding like a game piece on a game board, while actions like firing weapons are fully animated.

The visually stunning map dioramas, tabletop miniature aesthetic, and fun animations are among the game’s many charms. The range of camera abilities, from full rotation, zooming, and full control over where to move the camera, allows for a cinematic virtual experience. I did need to lower my mouse sensitivity as much as possible to avoid vertigo. Personally, I thought watching the computer move the camera around during its turn enhanced the tabletop miniature experience, but I understand why that isn’t everyone’s cup of tea. 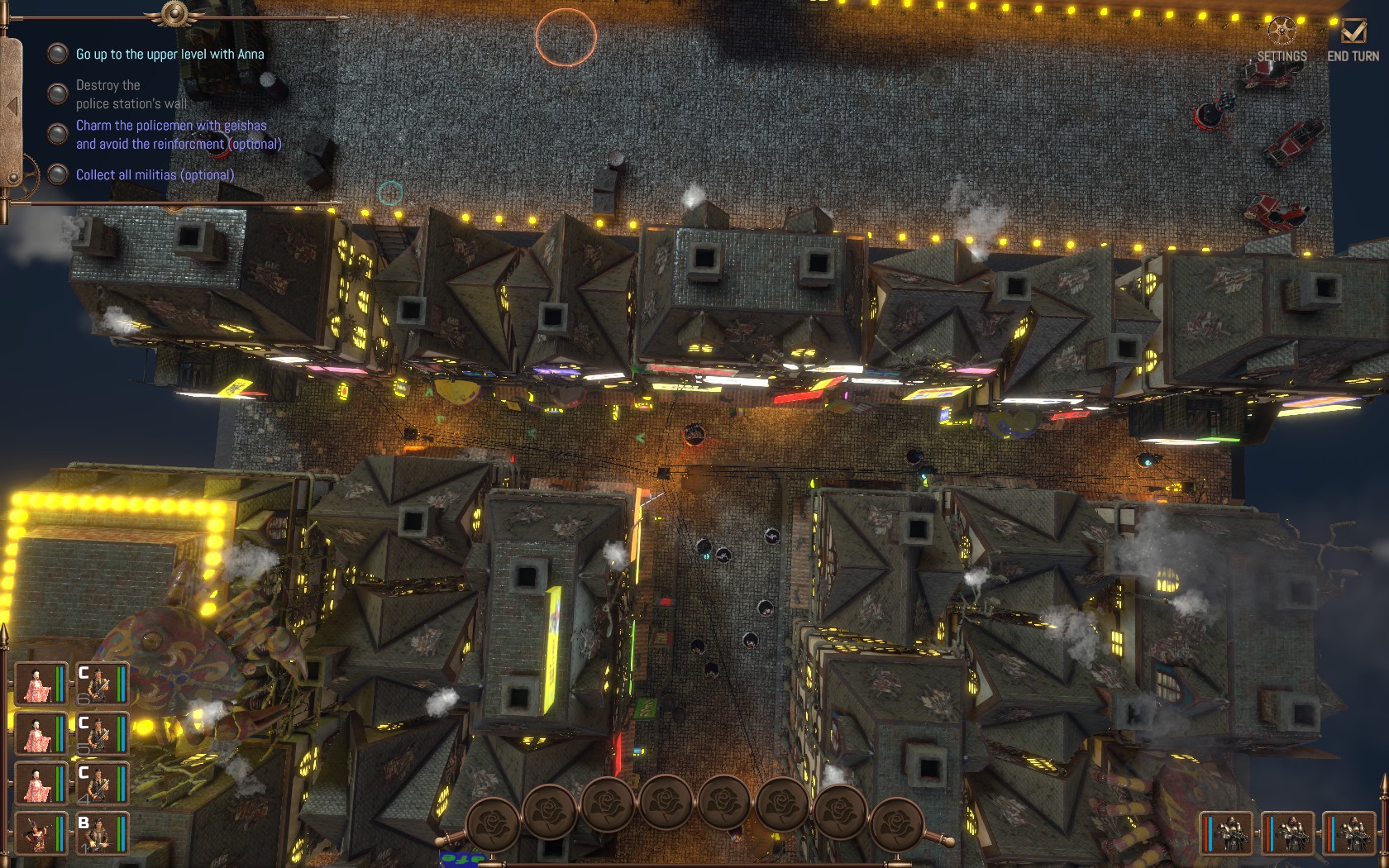 However, as mentioned earlier, there are some significant detractors to the gameplay experience. First, the game often doesn’t provide enough information on how things work to make good strategic decisions, meaning an experimental trial-and-error approach is often required. In and of itself, this wouldn’t necessarily be a detractor if it weren’t for the second and third issues of lengthy (1-2 hour) chapters with no checkpoints or way to save, undo, or cancel. The fourth issue is that the AI for your units that the computer moves is a hot mess, often directing your units in a way that ends up contrary to what was desired. Sometimes this even resulted in them becoming frozen and unusable for the remainder of the chapter. For this reason, it would probably have been better to have full control over all of your units’ moves during your turn.

It was disheartening to rage-inducing to have to start a chapter yet again after more than an hour because of a failed experimental move, misclick, or the computer moving your units contrary to your orders. The game’s initial charms grow thin on successful replays. After the second chapter (the first non-tutorial chapter), you get access to TeamBuilder. Although in some respects it seemed intuitive, not understanding what training entailed left me stuck in an untenable position for the third chapter to the point I literally had to backtrack and replay the second chapter yet another time. 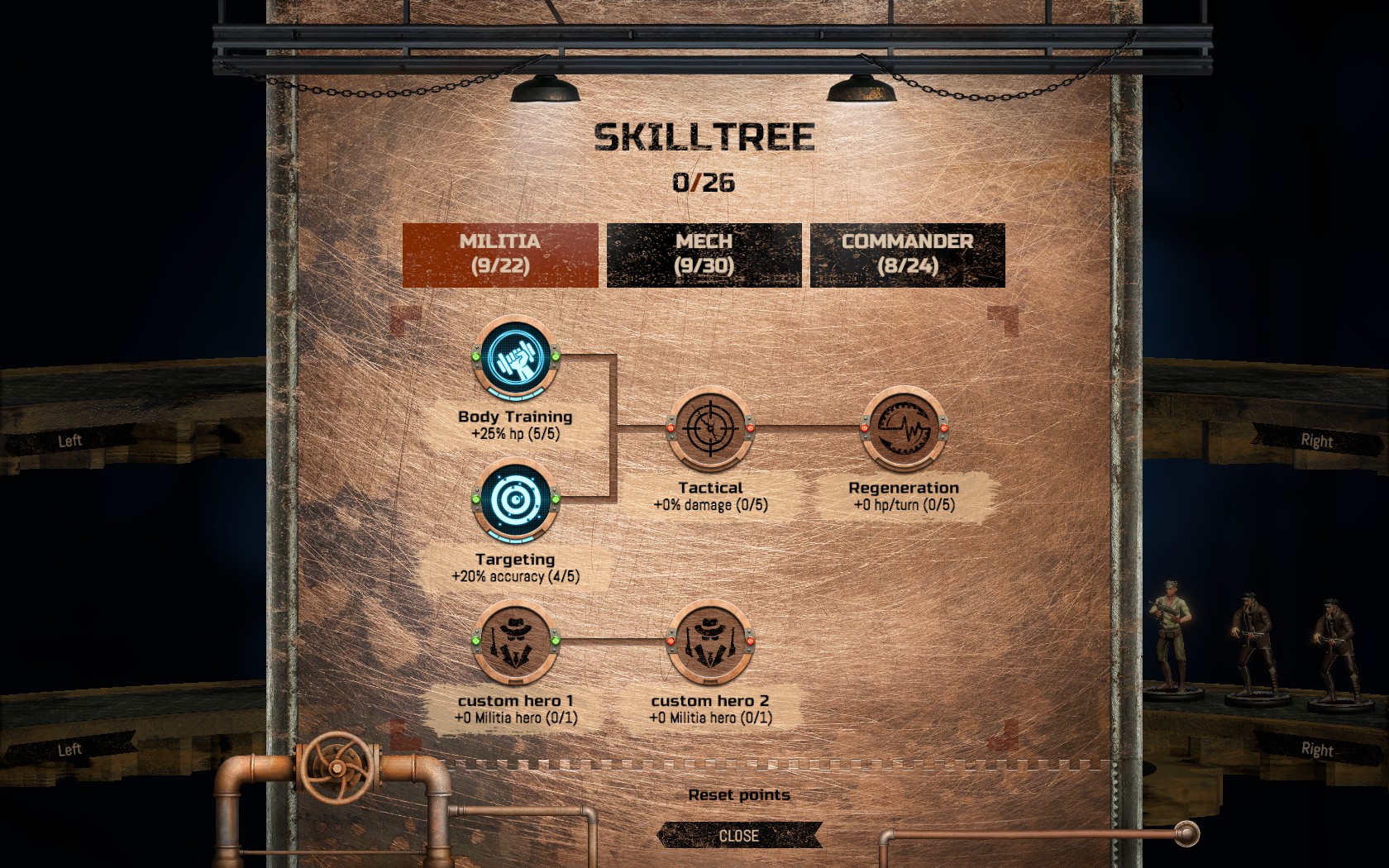 While I did learn from my failures and successive attempts did go better, the fact that after almost 12 hours on easy difficulty I still haven’t been able to successfully complete the third chapter has made the gameplay start to feel less like an enjoyable strategic challenge and more of a slog. This is especially true when you consider that the first chapter is a short barebones tutorial. I honestly may have thrown in the towel a while ago if it weren’t for the fact that I wanted to be sure to give the game a fair chance before reviewing it.

To be fair, the story is clearly not the primary focus of the game and is more of a thread loosely tying the combat chapters together. That said, a staggering 3 minute 20 second long introductory cutscene that can only be described as an info dump plays on loading and seems to be where you get most of the story details. Other than that, there is also a short voice-narrated radio broadcast and a short text explanation at the beginning of each chapter. From the database, it appears like there are 8-9 chapters total (it looks like chapter 8 has a part 1 and a part 2), including the first tutorial chapter, but I can’t say how the story pans out since I haven’t been able to make it to the end of chapter 3.

The music has industrial elements and sounds like it is utilizing traditional Japanese instruments like the koto. The introductory cutscene and the radio broadcast at the beginning of each chapter are the only places with voice acting. The radio broadcast audio is really well-done, perfectly evoking early radio broadcast sound quality and style. The sound effects enhance the animations for different actions in a way that fits the ambience of the game. 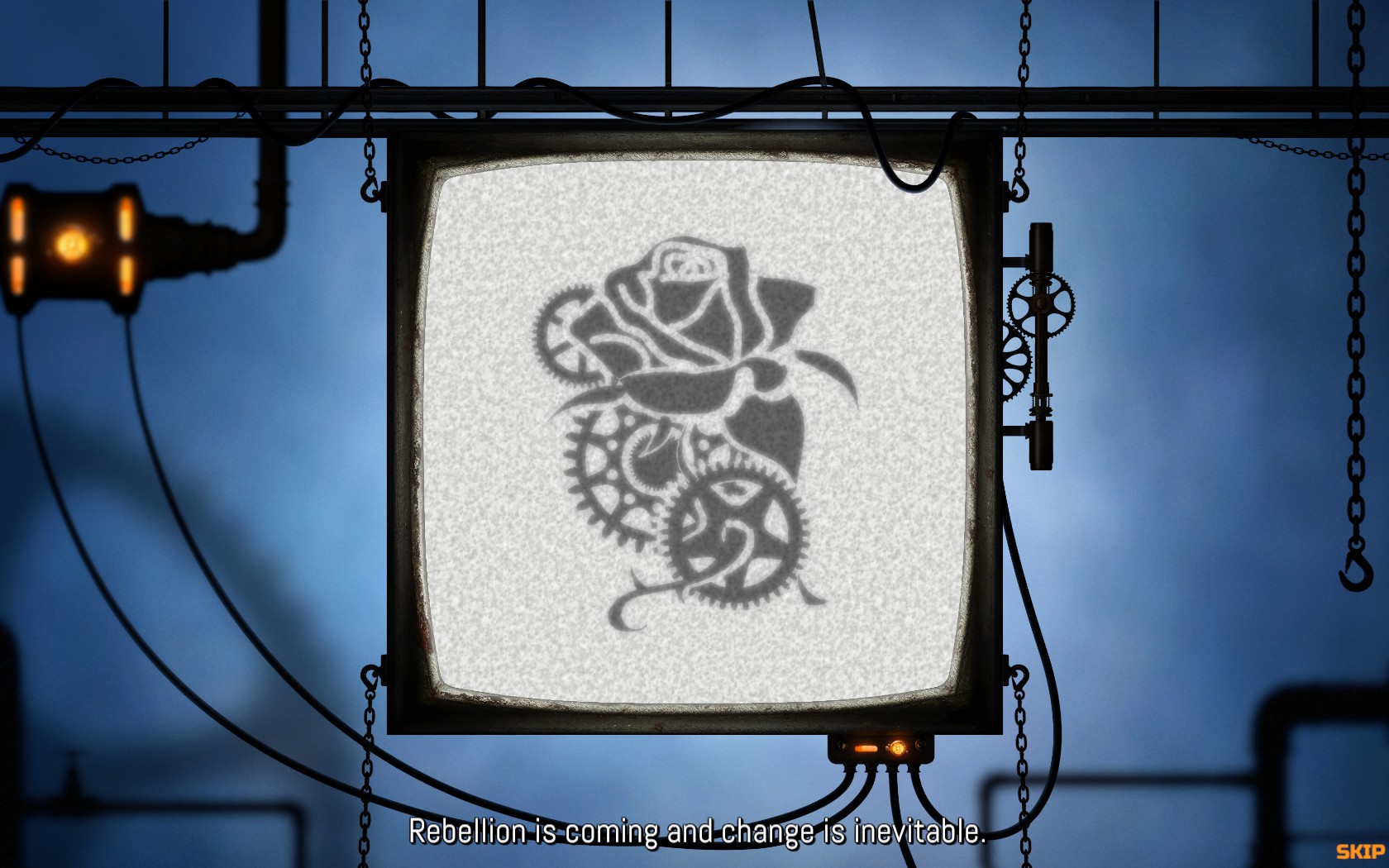 At the time of this review, the price on Steam is $12.99 USD, and the game has no achievements, bonus content, extras, or trading cards. Current roadblocks to progressing in the game make it impossible to provide an evaluation of the content-to-price ratio.

Ultimately, despite SteamCity Chronicles – Rise of the Rose’s many charms, the game unfortunately fails to deliver a playable turn-based strategy experience. In its current state, I cannot recommend purchasing this game, although if the developers make future improvements I’d be eager to give it another try.

A STEM (science, technology, engineering, and math) educator, lifelong lover of games (be they tabletop, computer, or console), and a fan of awesome storytelling (be it game, book, or film). My passion and interest in the game design and development process as well as my completionist mindset led me to reviewing games, and I continue to hone my craft in this regard.