Cloudpunk is a storyline focused walking simulator set in a futuristic city called Nivalis. Your goal in this game is to deliver packages using your HOVA which is basically your vehicle. It is a beautiful title to try out before Cyberpunk drops as it just oozes with atmosphere in every corner.

An amazing game hiding so much atmosphere behind its simple game mechanics!

Truth be told, I thought that this would be another mediocre “atmospheric” walking simulator, but I was so wrong, the game has a totally unique world with its problems and you can learn stories from every perspective in this world. Speaking of the world, it is a rare occasion that a city can feel so alive, everything is just spot on. The game manages to tell an amazing story with great and unique characters.

Yes, the gameplay is pretty simplistic, the best way to describe the impact of this game’s gameplay mechanics would be to mention Euro Truck Simulator. Yes, it isn’t the best comparison and the games differ in so many ways but keep in mind that both games have a simple task and that is to deliver things. That’s basically the entire thing.

Delivery missions:
Well as mentioned you are a delivery driver for Cloudpunk, only rules are to deliver the packages and never ask what’s inside of them. You start off with a pretty bad HOVA (vehicle), it is slow and only offers basic features. After collecting your package from the HQ or another Nav point you will have to drive through the highways of Nivalis most of the time. This may sound like an easy task but trust it isn’t as easy as you may think, the entire traffic resembles the streets of India where it’s basically a luck game if you’re going to crash or not. The best way is to fly real low in order to avoid unnecessary accidents. After avoiding all of the crazy Nivalis drivers you will have to park your HOVA in a parking lot, you cannot leave your HOVA on a random location as they are programmed to only accept the traditional parking spots. After doing a perfect parallel parking maneuver you will have to continue on foot in order to successfully deliver the package to the corresponding customer. A small dialogue will trigger which will probably give you some ideas of the person, after that the delivery got approved and you will get paid. There usually isn’t a time limit which means that you can casually explore the locations, in order to trigger more useful dialogues and find items that you can sell in the future to a trader or use these items in order to fix random lifts that are broken in the city of Nivalis.

Open-World and driving around:
There are other secondary things you can do after completing a mission. You can easily upgrade your HOVA or even buy a new one. There is a decent variety in order to improve your HOVA, you can make it faster, more efficient or even buy bumpers in order to pay less in order to fix it. Outside of that, you can find various Punch cards for Evelin which is an android that lost its memory, by collecting these items you can help her regain her lost memories. The city of Nivalis offers the chance to buy and consume food which is a pretty nice addition. The Open-world mechanics aren’t amazing but they do have a charm that will probably keep you interested for a while.

The main character is called Rania, she decided to start a new life in Nivalis after the Corps took everything away from her because of her debt. She lost her mother, she lost her automata’s frame (basically the body of the dog) named Camus and obviously, she lost her home in the fields outside of the city. She decided to move to Nivalis despite hating the city and found a job in Cloudpunk. Cloudpunk is a delivery brand that specializes in illegal packages not allowed by Corptech. On your first day of the job, you meet “Control” which is the person giving you your missions. During her missions delivering packages, she drives around in her HOVA and visits different parts of the city. Along the way, she meets different characters, including androids, AI, and humans at every level of society. Over the course of the night, Rania will be faced with different moral dilemmas as she discovers the truth about a rogue AI. Her loyal companion dog Camus joins her as a so-called Automata in the frame of the HOVA as Rania tries to collect enough money to buy a dog frame for him and make a living in this city. A little before the “Revolution” you meet Huxley, an android well known for being the best “cheap” private investigator, he explains to you his mission and you decide to help him as he is trying to find a young girl. After some scary moments, you are able to save Pashta, a girl that had to be saved because her own father wanted to delete her memories due to discussions that could throw him right into jail. Later on, “Control” got caught by Cyberpunk for giving out information that you needed to save Pashta. He explains to you that he actually died many years ago and because he had debt he had to “stay alive” as an automata in order to clear the money for Cloudpunk. He obviously clears your criminal records and the next day you are woken up by a delivery driver. Inside the box, you find Camus’s frame. The story is the main reason to get this game, it is so unique to hear out androids or cyborgs talking about their problems or even people that sold their bodies in order to repay their debt there aren’t always bad things you might meet some gangsters that build playgrounds for the children. Truly a magnificent universe!

Cloudpunk makes use of the well-known Unity engine which in all honesty is a pretty popular Indie game engine that usually works pretty fine. 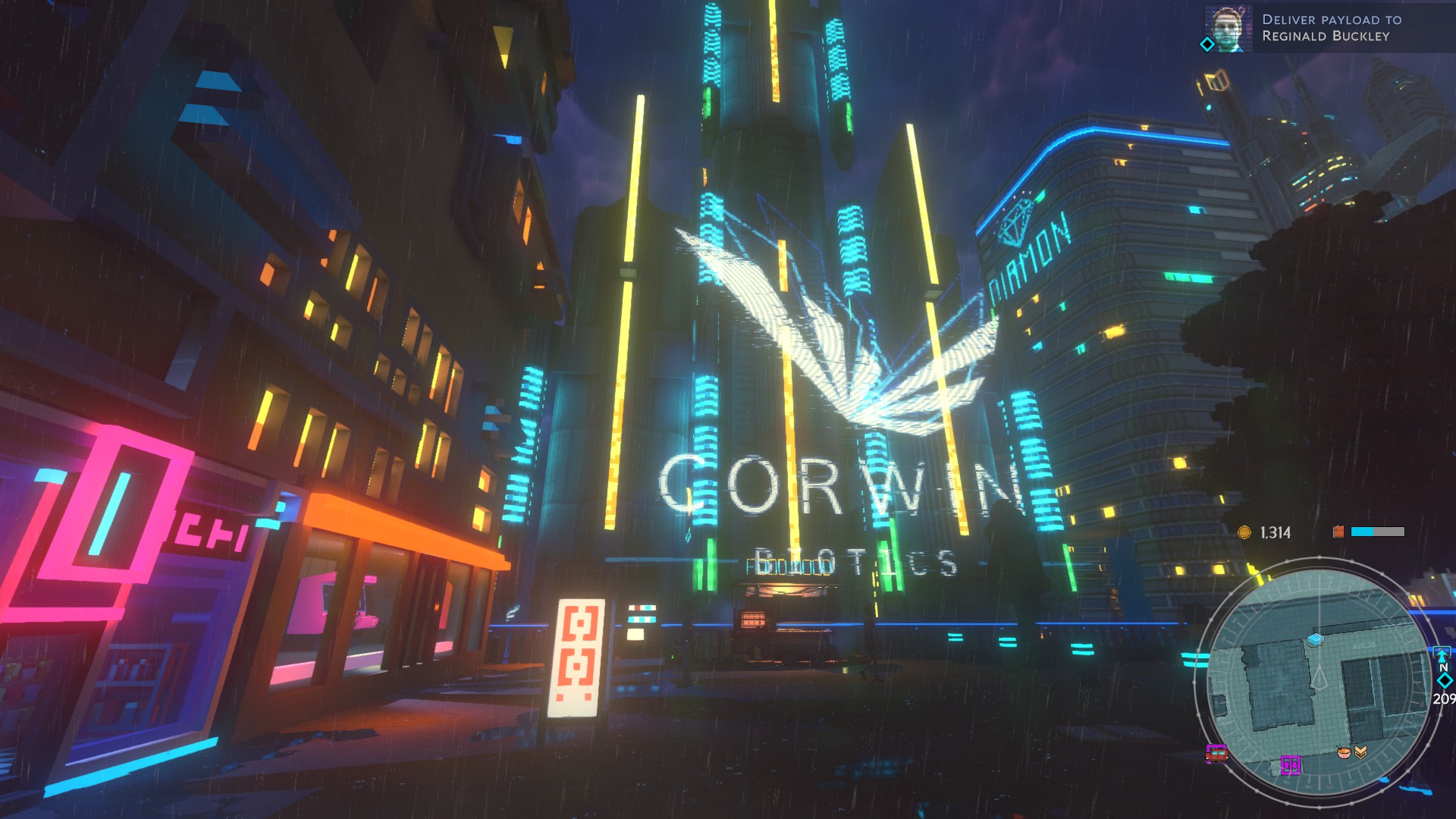 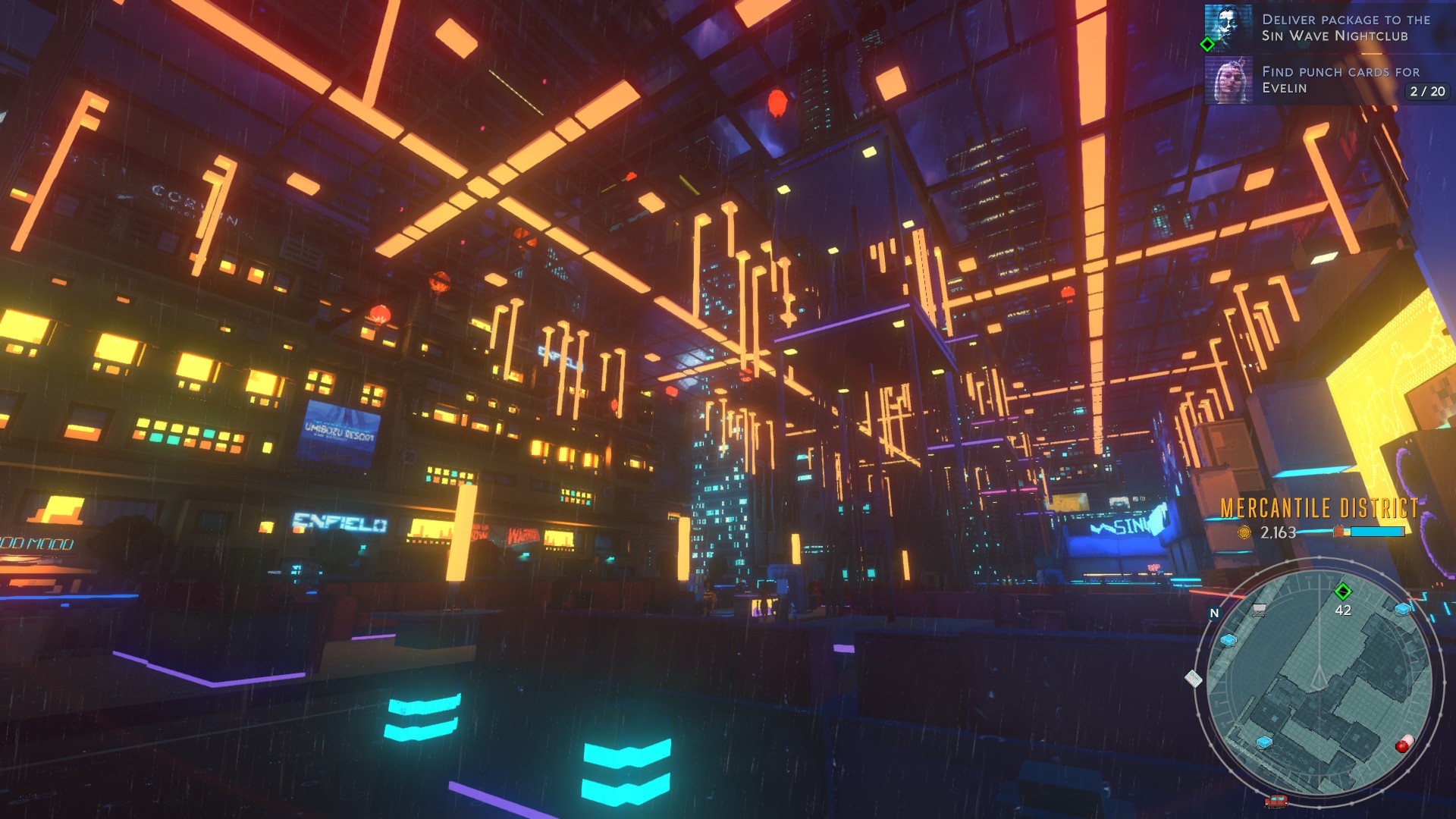 Audio / Soundtrack:
The Voice-acting is truly a masterpiece, every character talks in a unique way while being totally indistinguishable, you could recognize a character just by the sound of his voice. Literally, all of the voice-actors are crystal clear which is rare for an Indie game. Only a small nitpick I have is with the main character Rania, there are some rare occasions where she does sound a little out of place, other than that I can’t really hide it but this game truly touches perfection with the voice-acting and amazing soundtrack.

Cloudpunk was a big surprise for me, the atmosphere is spot on and it just consumes you, I always wanted to start dialogues with all of the characters and I was actually getting sad sometimes for making some drastic decisions. The game is truly great, obviously it does have some minor flaws, the entire walking simulator thing isn’t a thing everyone is willing to play through but that is obviously not the game’s fault. Lastly, the performance on low-end devices leaves a lot to be desired but still, this game is a wonderful experience!