Mind-bending first-person puzzles, with tricks based on perspective.

There are so many games released these days that not even Save or Quit’s little army of friendly reviewers can cover everything. And yet, this is the third time that we are reviewing Superliminal: once on the Epic Games Store, once on Switch, and now on Steam. Many games are not so lucky, and even worse: one of us having a bad time during a preview can put off the rest of the gang from reviewing the full release of a game. Conversely, we keep coming back to Superliminal despite the crowded market vying for our attention; decidedly, this game seems to be quite appealing!

Superliminal is a first-person puzzle game in the direct lineage of Portal. There is a narrator guiding and commenting on the progress of the player, and there are rooms with puzzles to solve to progress. Except that in Superliminal, there is no danger of death or no particular movement skills required: the experience is accessible to anyone attracted to its interesting concept. 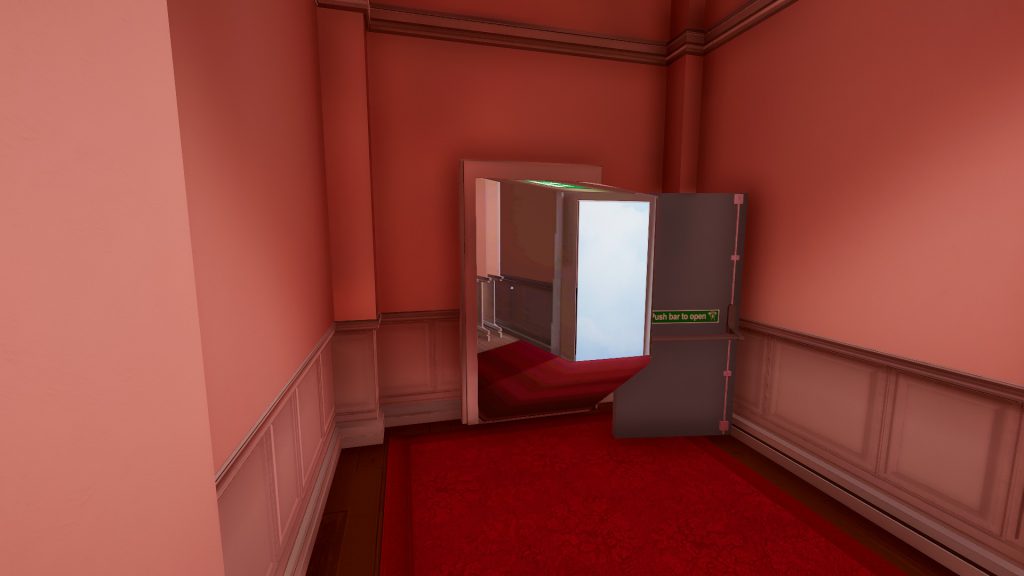 Superliminal’s basic principle is that everything is a matter of perspective. If you watched The Lord of the Rings, you perhaps wonder how regular human beings played the small Hobbits while appearing small alongside the regular-sized humans and Elves, and no CGI was used! In reality, this was a clever set-up, with the Hobbit actors positioned farther away and faking an interaction with the magician Gandalf in the foreground. Now Superliminal is constantly using this trick, letting you actually perform it at will. If you pick up a small box in front of you and move your mouse to visualize the item toward the back of the room, you can then drop it and hear a loud satisfying “thud” as what was a small box from up close has become a large box in the background, perfect to jump on top and reach the exit. Conversely, if you point your cursor on something huge far away and inspect it at the level of your feet, it has become super tiny and cute. 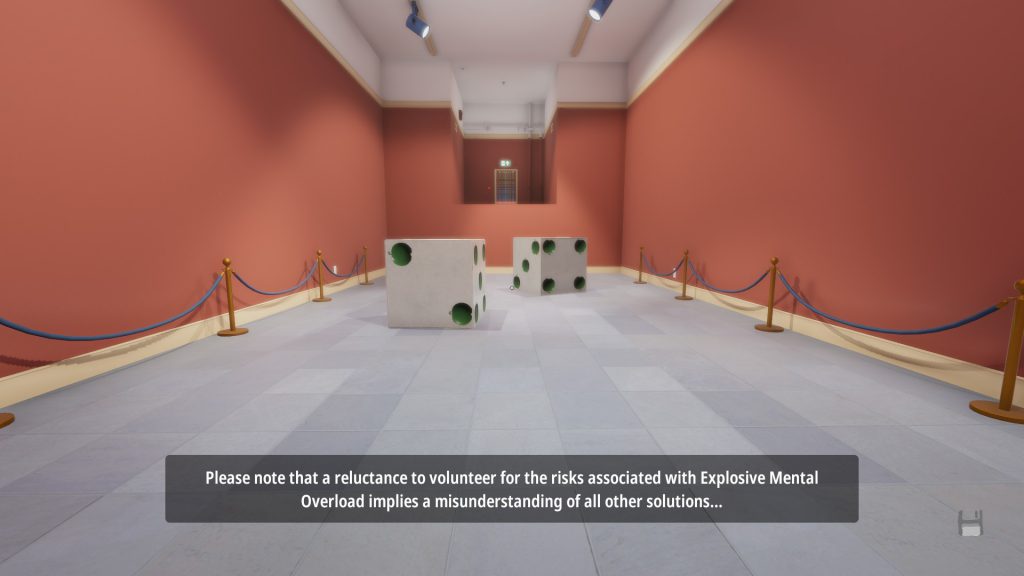 Not only does it feel amazing to experience while playing, but it also eliminates one of my major annoyance in many puzzle games: tediously grabbing, pushing, or pulling boxes from place to place. In Superluminal, you only need to position yourself in a way that your point of view allows you to perform the trick. Another saving grace is that the puzzles are not repetitive, as the game is incessantly finding ingenious ways to trick the player in a playful way (never sadistic and annoying), constantly managing to propose new game mechanics that fit with the theme without adding complexity that would leave its players behind. Even though this is a puzzle game in principle, it is in reality more of a unique experience than a challenging game.

There might still be a few moments that leave you scratching your head for a while, until you figure out an interactive element in your environment, or you find the right approach to a puzzle and feel awesome in a “ha-ha!” moment. Depending on your speed and knowledge of the puzzles, the game takes approximately 1 to 3 hours to complete. Then you can play it again in challenge mode, or with the developers’ commentaries. 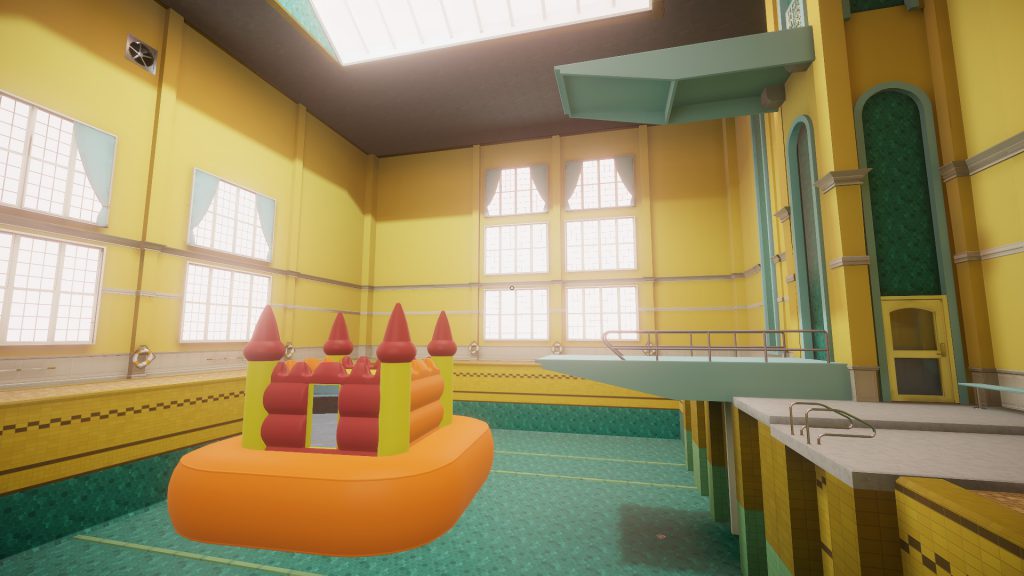 The Dark Side of Reality

While I appreciated the surreal environments with flat textures, I was less convinced by some sections that included realistic textures. For example, the ugly cardboard; and since it cannot be interacted with, I only saw it as pointless visual pollution. Some specific scenes with toy castles made me feel like I was playing a first-person Alice in Wonderland, maybe that could be a direction for a sequel. Superliminal’s story is a bit hit and miss. After the genius level of Portal and The Stanley Parable’s narration, most first-person puzzle adventures with a narrator sound like pale imitators. This is a little bit of the case here, as the narration failed to connect with me, although I still enjoyed some of the clever lines. There was also a long chapter spent walking in dark corridors. While this chapter had some striking visual tricks and managed to build a strong atmosphere, it also felt at odds with the rest of the game, both in tonality and in trading a bit too much the puzzles for a walking simulator. Finally, I would have preferred music as surreal as the visuals rather than jazzy tunes, but I suppose that it is a matter of taste (I cannot stand jazz). 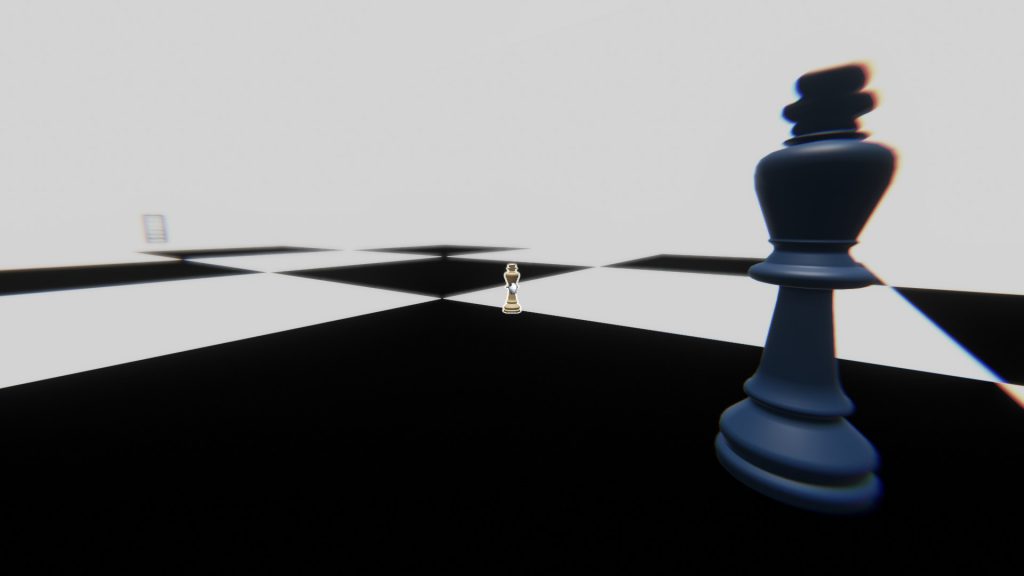 Superliminal awed me during the duration of its short adventure, and I am charmed with the surreal puzzles that I experienced. In terms of mechanics, there is a fresh stream of ideas, always surprising positively and never hindering or frustrating its player. Mad props to the developers for all the crazy tricks! If you like what you just read or what you saw from the game, I heartily recommend Superliminal; as long as you are aware that it is accessible from start to finish, rather than building up to complexity and difficulty in the puzzles.