Gone out of my sight.

GONNER2 is another action roguelite I had my eye on for a while – chaotic combat? Unique and inviting combat? Slick platforming mechanics?

Sadly, upon laying my hands on the game, my boredom increased the more I played and ended up having very little fun overall. The overall simplicity of it and the cluttered effects make for a repetitive and rather confusing experience that doesn’t even start all that strong.

GONNER2 immediately put me off as soon as I learned I couldn’t rebind any keys. The controls aren’t bad fortunately, but we should be able to rebind keys without any trouble.

The tutorial is really short but teaches all the basic mechanics well, throwing you right into the action really quickly. You pick up your rifle, a backpack and off you go!

Death is a recurrent theme in GONNER2 and in this second entry more so since you literally start at death’s lair, where you can pick your gun and start a fresh run. While the starting rifle is quite abysmal, you’re encouraged to wander the levels in search for secret areas to find more perks (perks and currency that are stored in your backpack – if you die, you can respawn without it and try to get it back otherwise you die for good and must start over) and even brand new weaponry for your run (if the weapon you found is brand new, it’ll be added to the starting hub permanently so you can start with any unlocked weapon!), which will all fair far better than the starting pea-shooter. 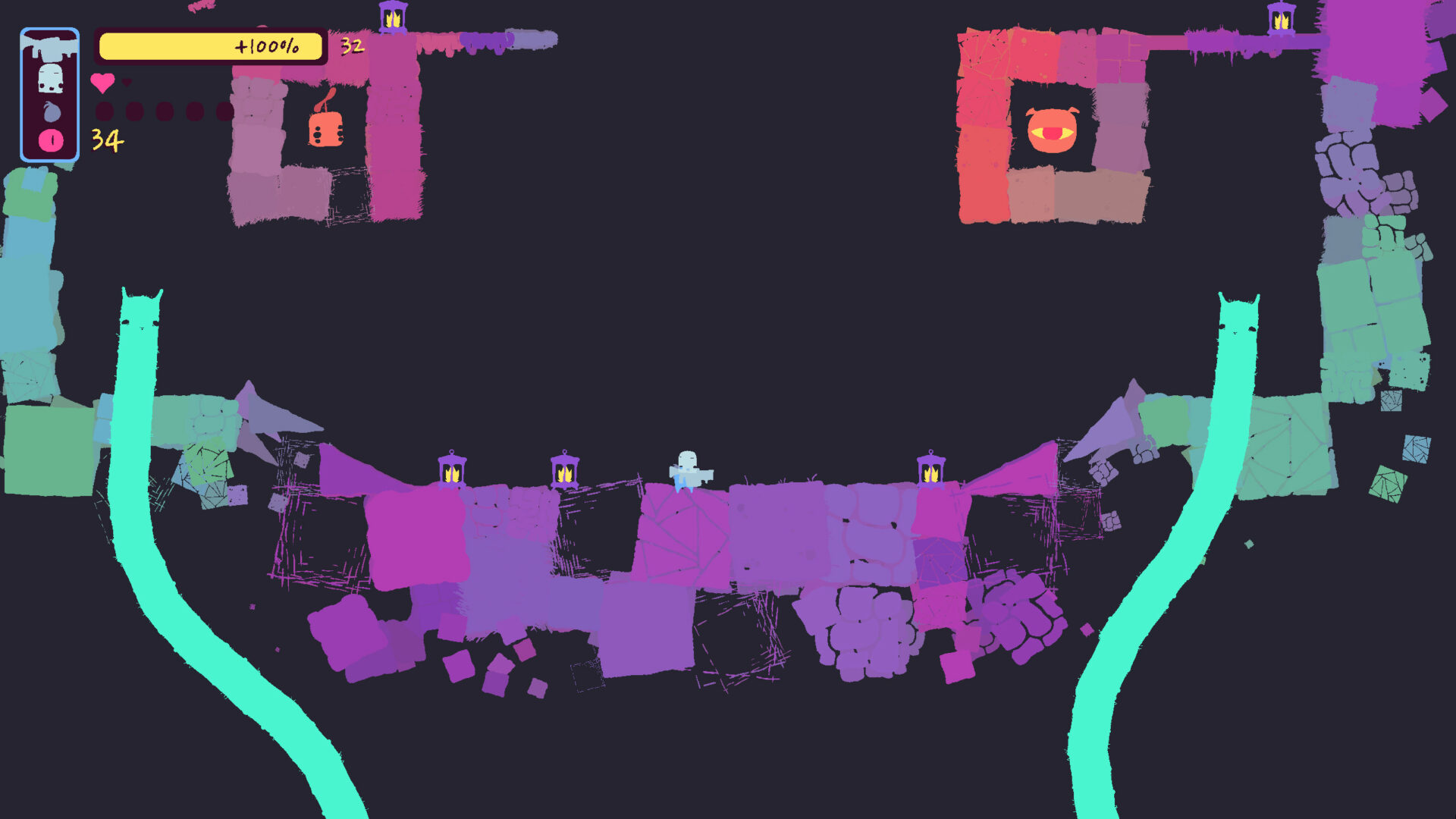 GONNER2 controls beautifully, it feel like Super Meat Boy with guns, your speed, the wall sliding and wall jumping all feel remarkably polished and intuitive to the point I never felt like death was the game’s fault. By jumping, you can attach to walls and either slide down or wall jump to reach higher platforms – the levels are all procedurally generated as they attach walls at random, generating truly different level layout that sadly… look the same (more on that later).

Despite the rock solid controls and the fact that GONNER2 feels GREAT to play, it doesn’t LOOK great to play – combat is muddy and the overuse of effects and particles in a 2D game that is highly stylish as far as graphics are concerned make GONNER2 a cluttered mess when it comes to describing its combat. How can I dodge an enemy or know what to aim at when all I see besides walls is orange and pink? Enemies are orange or pink, when they die, they get destroyed into orange or pink particles that move in the “air”, everything blows up when dying and it just becomes a mess that looks too confusing to handle – in later stages the game becomes an exercise of either tactical slow paced shooting and backtracking (thus ruining the combo system) or a hit and run simulator where killing enemies is more detrimental to your performance since you can see nothing on the screen as it’s all messed up thanks to color shifts, screen shakes and overdone particle effects in every pixel the game renders!

And ultimately, it commits the ultimate sin – it’s not fun!

I seriously adore how it controls, truly remarkable fluidity of movement; the combat on the other hand is messy and confusing to look at and it doesn’t feel fair – enemies do pretty much the same attacks all the time – it’s quantity that makes them dangerous, not quality. They’re not even difficult!

Aim and shoot – they die. The enemies aren’t hard to take down but legitimately 70% or more of my runs were ruined because when killing a high amount of enemies I couldn’t understand a single thing of what was going on on my screen and died to an enemy that dodged my attacks or simply came on top of me without noticing. Enemies just sit around! They stand there and shoot really slow orbs or just walk towards you… it’s the most basic of AI’s and the fact that none of them are truly threatening like in most other roguelite games is just baffling – especially when the true enemy in this game is its own graphics and not the actual NPC enemies you’re fighting off. 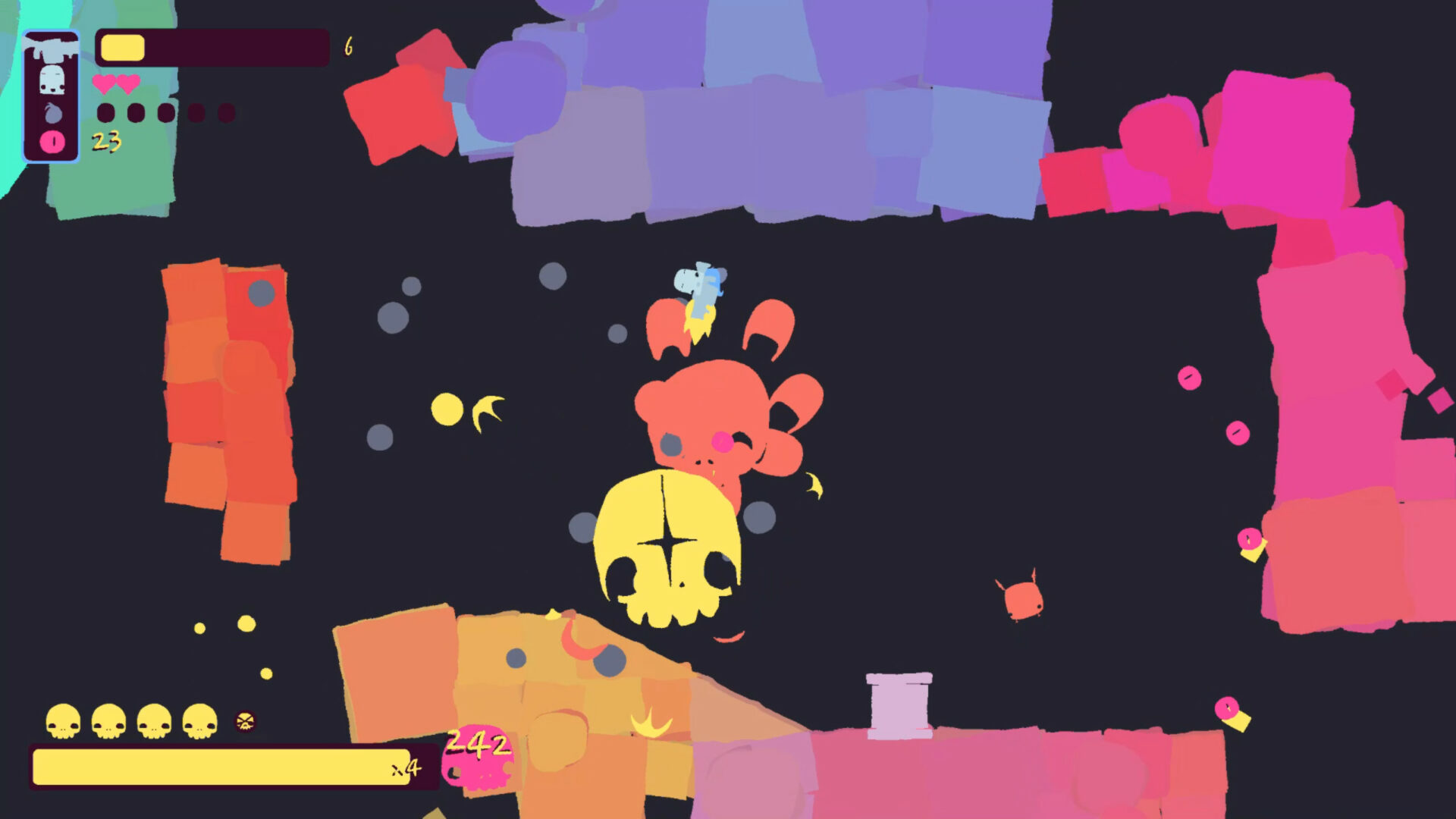 And let me tell you about the boss fights…

The boss fights are easier than the actual levels! A giant bird that walks towards you so slow that before it reaches you it’s at least at 50% HP. A Squid that shoots 2 or 3 minions at you that die in one shot and dies by shooting one of two eyes that it almost never protects.

I beat all boss encounters on my first try and never dies to a boss yet in my countless runs – the graphics don’t get in the way so I can actually aim and use my skill to beat the level, once the screen becomes a shakefest, the game becomes difficult because of visual design decisions and not because the gameplay is fair and challenging.

So I stopped playing, something I often don’t do. GONNER2 lacks the core component of a game – to be fun – something almost all other roguelites (a genre I’m extremely fond of) accomplish at least somewhat.

One of the slickest controls I’ve handled in a roguelite sadly ruined by one of the most visually cluttered and messy gameplay effects that turn what should be a fast paced and fun 2D shooter into a very unfun and repetitive action roguelite with lackluster proper difficulty.

GONNER2 has slick animations paired with a simplistic but quite trippy art style – it’s easily its strongest component allied with the great controls. While it looks great, it also looks really repetitive after a few runs as it’s all just blocks on a coloured background – enemies also looks quite similar to one another and quite dull in general with little creativity.

The UI is even more abysmal as you have to open the menu in the Main Menu itself in order to quit the game as the only clear option is a “Press Jump to Play” prompt, but never how to quit or change your audio/visual options (which there are none besides a couple audio sliders and mouse controls, nothing graphical which makes me wonder if the recommended requirements are truly a GTX 1060 and a 6th Gen i5 CPU when it looks like it can run on any computer that can open – nothing more complex than Crypt of the Necrodancer or Binding of Isaac, for instance).

Audio is solid though, great sound effects and a minimal yet fun soundtrack helps you progress through the samey levels after a while – I wished for a punchier soundtrack though, something other roguelites do much better at getting your blood flowing for the combat sequences.

Despite being a massive roguelite fan, GONNER2 is far from what I seek in a game of the genre. Messy effects that completely make the combat an effort of attention and not skill paired with dull and repetitive level backgrounds make for a repetitive experience after 2 hours or even less. For the asking price there are FAR too many roguelites I would suggest that capture GONNER2’s feel in a better way, on a progression, technical and gameplay level.