Is this game another Terraria-styled copy? No, it is something totally unique!

Unrailed! is a co-op multiplayer game, your goal is to build train tracks that lead to the next station or checkpoint. This game is all about, timing, consistency, fast-thinking, and efficiency. Keep in mind that there are lots of difficulties awaiting you, like Bandits, outlaws, and even Magical creatures.

At first, when I started playing I thought that this was an average game, nothing amazing. After some hours and after some legit and challenging online games I will have to say that this game is pretty underrated, it gives gameplay experiences from both worlds. On one hand, you get the relaxed casual gameplay and on the other hand, you get a competitive online match that needs concentration and quick thinking. Overall a great experience.

Movement:
In Unrailed! efficient movement is key, simply creating 1 block corridors will not work as you will keep on bumping with your teammates or the train will simply push you out. Instead, try to create a 3 block or even 5 block corridor. It will make movement a lot more efficient. The game does offer a Dash ability that allows you to get a sudden burst of speed. Keep in mind that you cannot spam the Dash button as it does have a cooldown. Basically planning out a well thought out route will lead someone to success. Other than basic knowledge you will have random encounters where your control keys get inverted or the map turns upside down, the longer you play the more competitive it gets.
After each completed Biome you get the chance of either upgrading one of your current wagons or completely buy a new one that first your playstyle, the menu explains what each wagon does really well.

NPCs and Train upgrades:
Now when I’m talking about NPCs I’m am obviously not referring to friendly ones, these ones I am talking about are basically linked to the Biome you’re currently in. For example in the beginning you will have to deal with Bandits, they will usually steal one of your resources, usually wood or stone. When they succeed in taking one of your precious items they will go to the edge of the map and throw the item into the endless abyss. In other biomes, you will find magic creatures that will “take control over you”, which simply means that your controls get inverted for some time. The only way to combat that is to either use your Axe/Pickaxe and eliminate them. Another way is to simply not mine the materials around them. What I mean by that is that sometimes you will get lucky and the enemies will simply spawn in areas where they are basically locked in. Just think of it, killing them takes away valuable time.

Other aspects:
I’m in love with the Interactive Menu, you basically move your character on each option in the menu which is simply unique and great.

The addition of Emojis do give the game some funny moments but in a competitive setting, it shows the limitations.

Lastly player death and revive animation are hilarious, after getting killed by dynamite your character comes down to the biome again in a parachute, this obviously takes precious time away.

Online matches are pretty rare, so be prepared and find 3 other guys to play with

Unrailed! offers a pretty unique art style, really reminded me of Terraria but in 3D. All in all the game gives off solid vibes and atmosphere.

Graphics:
Once again the visuals really aren’t special but the colorful and simplistic visuals really add to the atmosphere; it is a pretty relaxing game as far as visuals go. 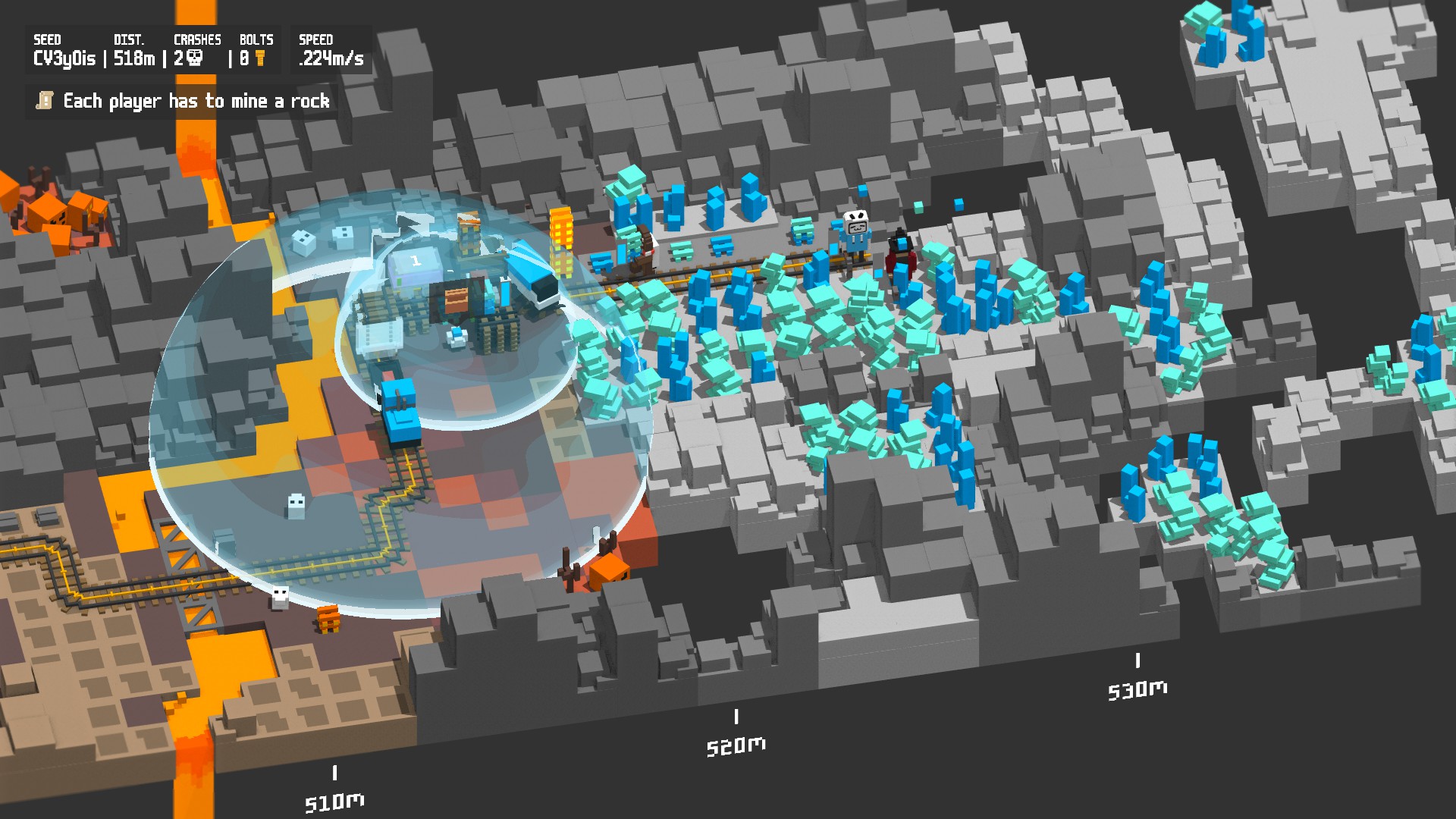 Audio / Soundtrack:
On the other hand, the soundtrack is simply fantastic, it changes every time you progress to the next biome. I really like the secondary sounds the game offers, basically the sound of mining or perhaps the dash sound. Everything just sounds relaxing.

Unrailed! is both a relaxing and challenging title, it relaxes you with its casual DNA of the nice soundtrack, colorful art style, and simplified controls, yet all of that becomes challenging with time pressuring you, especially in online matches. Sadly online matches are pretty rare to find which might make this game no seem so good after all.