9th Dawn III is an Action RPG somewhere between Diablo and Runescape. Unfortunately, its charm isn’t enough to carry its overly simple systems, and lackluster combat and dungeon design.

9th Dawn III is the third in a series of mobile action RPGs. It combines the gameplay of something like Diablo with the progression of an old-school RPG like Ultima or Runescape where you level up individual skills by using them and have many “secondary” skills like cooking, mining, and so on that are often relegated to MMOs, these days.

This kind of RPG is something we don’t see much of, these days, and it embodies a very specific feeling that I actually missed! Unfortunately, the systems and structure of the game are very shallow, and the game is quite bloated with meaningless dungeons with little to no story, which quickly depletes the sense of adventure it provided at the start.

The gameplay is what kills it, for me, unfortunately, and the problems likely stem from the mobile roots, which run deep. While I think that ARPGs (of the Diablo kind, read my Din’s Legacy review) have fundamental design problems (or, at the very least, unexplored paths), they at least provide viscerally fun and stylish combat, with interesting skill trees. This is where this game is most lacking.

Beside the combat itself, the dungeon and encounter design is quite poor.

Another problem is how the mini-games are too much like MMO professions, with all the mindless time required to farm and repeat the same menial tasks. Some degree of this would have been fine, but there is too much of it here, and little differentiation between the various tasks.

Finally, while I really like the fact that the game has an open-world, the side-quests are mostly fetch quests (cook me 15 rat tail soups, get me 15 bones from the skeletons over there, find me this item deep in that dungeon), and so is the main quest, as far as I kept playing. It was just keeping the player moving forward without every stopping to learn about the new time and its people. As you as you arrive in a new place, they point to the next place and off you go (but not without clearing a couple of dungeons to level-up).

While the review will be quite negative (as I’ll elaborate on the points above), the game isn’t terrible! It’s humble and straightforward, it provides a very specific kind of experience. If you’re into that, you’ll probably enjoy your time – I’m looking for something a bit more ambitious in my RPGs. Even with that in mind, I really enjoyed the first couple of hours – the game has a special kind of charm and nostalgia, a throwback to simpler times.

There are some UI issues, but those are being actively worked on by the developer, who is very responsive to feedback, so I will not focus on this. There are inconveniences, but they’re not too fundamental. Plus, Steam reviewers seem to be enjoying it quite a bit! So take my review with a grain of salt, as it is not intended to be completely dismissive of the game. It is solid for what it is, but not what I’m looking for. 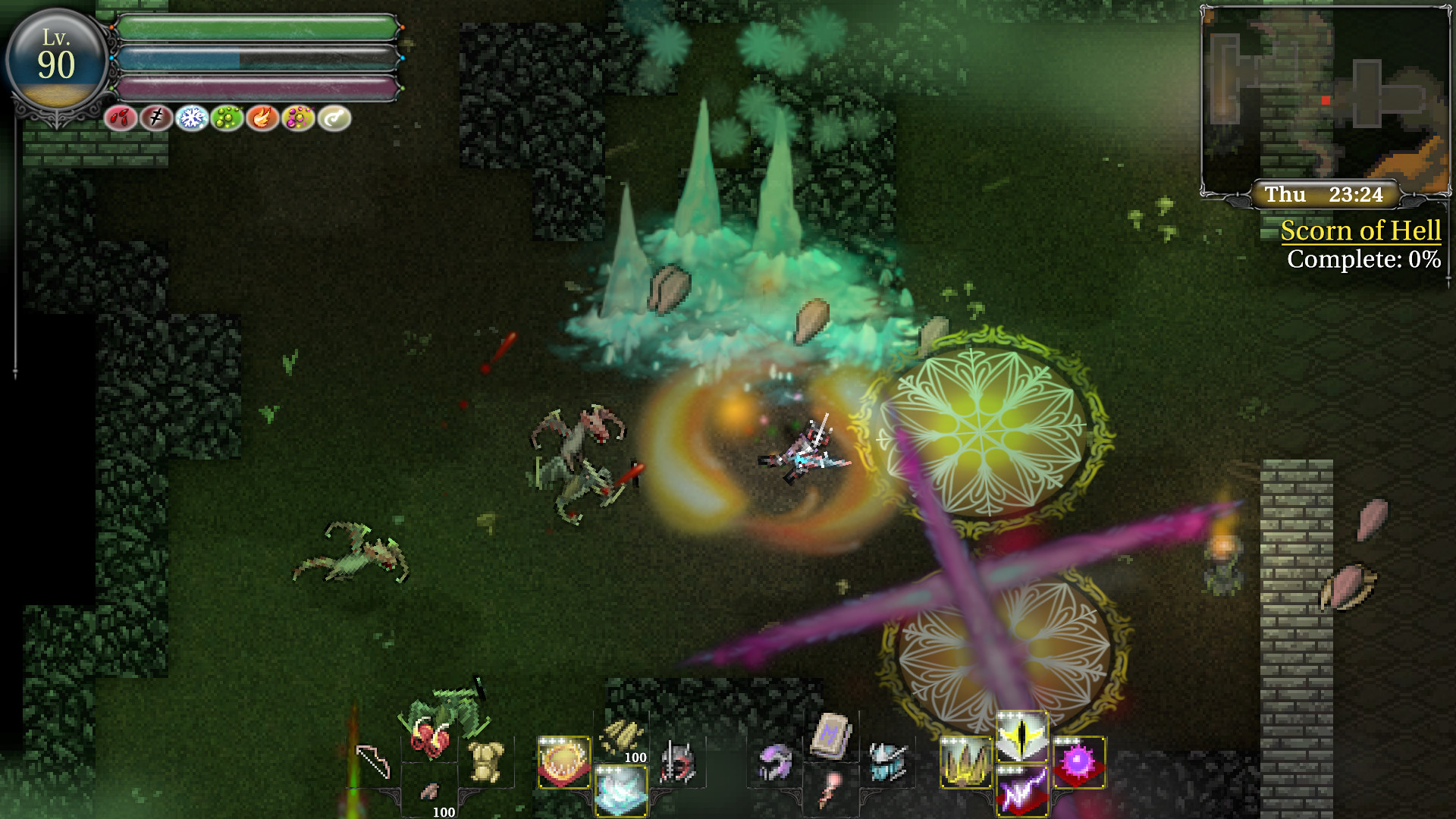 I mentioned Diablo, but that’s not quite right. You move with WASD and even have a dodge roll. Other than that, it feels like Diablo a lot. Mostly because of the enemy encounters, perhaps, and how much of the time is spent spamming abilities and tearing enemies down before they touch you. The game can be quite compulsive, in this sense.

There are two big problems with the combat:

I played as a mage, since a quick glimpse at the ability book showed how little there was to martial classes, beyond auto-attacking and buffing.

Unfortunately, the abilities of a mage are just as boring. I randomly decided to go for ice magic, and you simply fire (well, you ice?) a projectile that automatically targets an enemy. Tier 2 launches 2 of them. Tier 3 launches 3. That’s about it. This is like the most boring gun in a top-down shooter. And most spells seemed variations on this, with some having a very short-ranged aoe. Most of the time, you’re limited to simply projectiles.

Beyond the basic projectiles, buffs were also very important. I just had 2: increase magic power, and mana regen, beyond a basic healing spell. These were fine, but again, not very interesting. Given mana regen, mana isn’t a problem. So you just have to remember to press the buff buttons every minute or so. I feel like it should be more interesting than this.

Finally, and what really kills the combat, for me, is the lack of impact. Diablo feels great, from the chain lightning, to the stomp stuns, to the exploding enemies. It *feels* good. Here, nothing has force behind it. When enemies die they just kinda disappear and you just spam spells into a mob of enemies until nothing is chasing you anymore.

I understand this is a solo-dev, working on mobile no less, but there should be *something*. The combat, as it stands, is too plain, too bland. 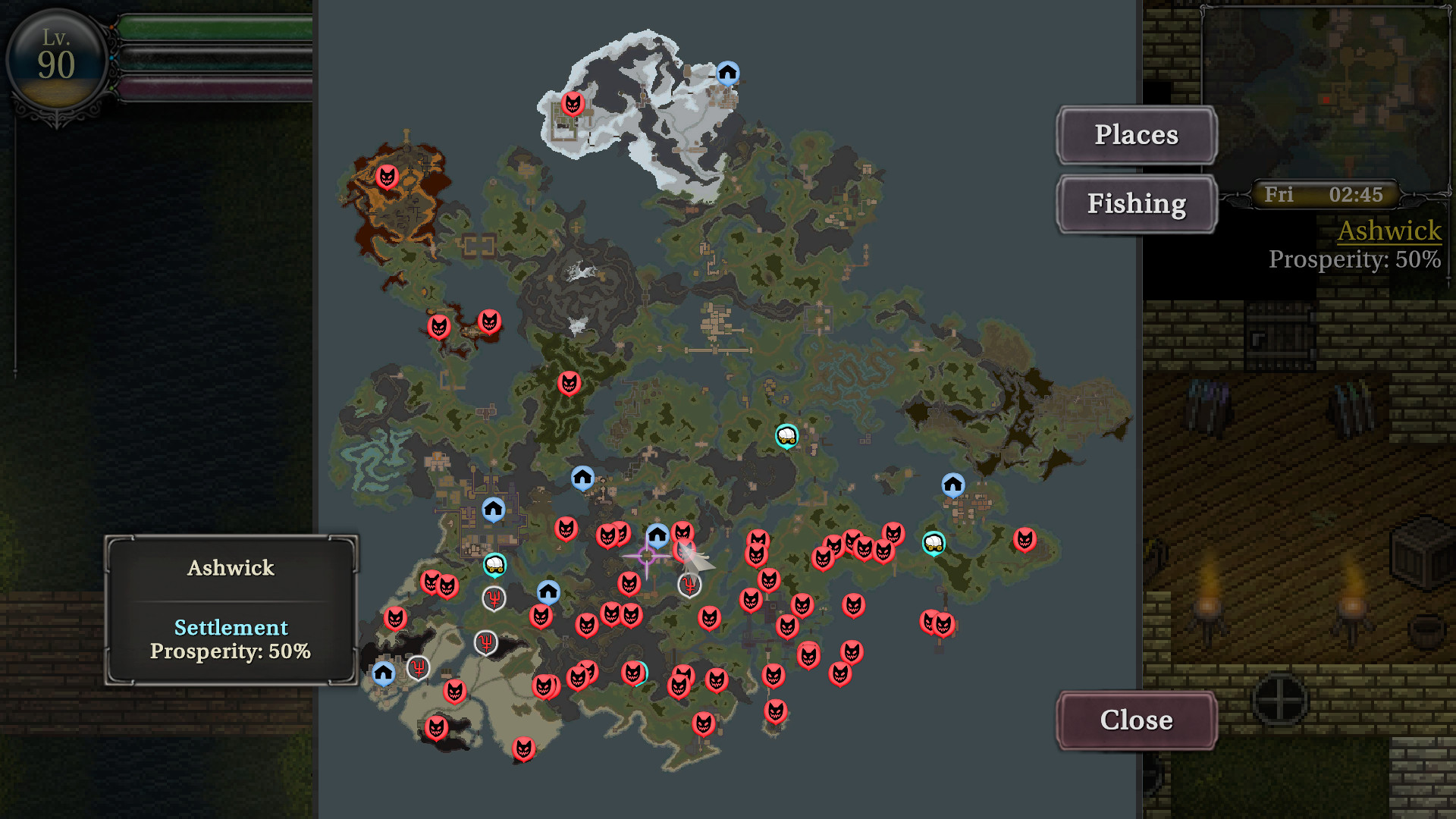 Dungeons are also very bland. Here, Diablo isn’t a good counter-example, as I find its dungeons extremely boring as well (at least in ARRPGs up to Torchlight 2). You have a big map full of dead-ends, and you must explore all of them until you find a random item or boss.

9th Dawn III has some more problems. The dungeons are structured with locked gates which are opened by a lever *somewhere*. Sometimes near, sometimes not at all. Dungeons were often a lever hunt, and I didn’t even know what a lever opened until I went back to check a gate. Some dungeons also have multiple entries and exits, and you must navigate between the surface and the dungeon to clear it. None of it was interesting, however.

Enemy placement was even worse, since the floors are simply littered with enemies. There’s no strategy or tactics (beyond sometimes hiding behind an awkward rock to create a choke point) – you just jump into the middle of 10 or 20 enemies and spam ice balls while dodging around and pressing the healing button when your health suddenly drops. Most enemies also follow the most basic mob behavior of walking in the direction of the player and swinging their claws or throwing the occasional projectile.

Dungeons have no story or flavor text, or anything. Well, there may be a very very tenuous context to them, but not enough to give wings to (my) imagination.

I really dislike this kind of design, and is one of the reasons I dislike Diablo quite a bit. It’s great early on, but it quickly shows its formulaic nature and stops being interesting. It becomes mere compulsion to uncover the next tile of the map and kill the next group of enemies.

Oh, and I almost forgot – the whole map starts revealed, at least its layout. So you can’t even use the “fog-of-war” as a way to guide you and keep record of where you’ve already been. Not notes, either. This was quite bothersome in the larger dungeons with multiple accessible gates and levers. At some points, I just didn’t know where I still hadn’t gone. 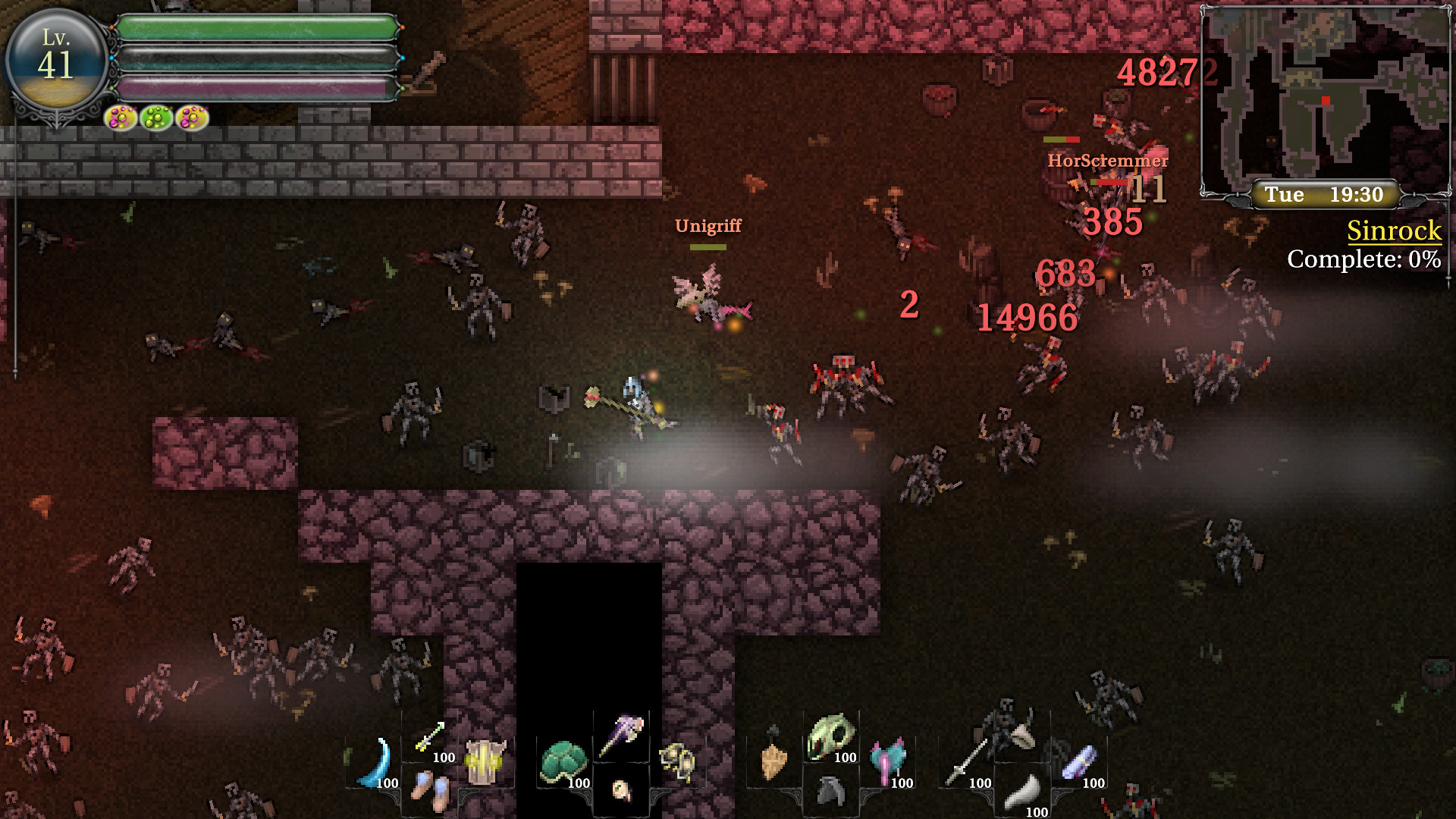 As I said, this is an almost cool aspect that you don’t see much in single-player RPGs. In this game, you can cook, brew potions, weave clothing, smith armor, craft weapons, etc. etc.. There are many professions. This is very cool!

Unfortunately, your skill starts at complete 0, and you must try to craft (and fail) a bunch of times before you get anything going. I believe success chance depends on both your overall skill and skill to craft specific “recipes”. All of these obviously use ingredients, which you may have to farm to get it off the ground. This is… a bit too much, but fine.
The real problem is that there is a mini-game to craft every item. There is a bar where the extremities are “bad”; there is a constantly decreasing “mark” and you can increase it by pressing a button. You want to keep the mark somewhere near the middle. That’s it. But you must do this for every single item. The game gives you the option to craft many at once, but the XP you get doesn’t scale with the number of items. So you’re actually encouraged to craft one by one. The interface is extremely clunky, too.

Overall, the system is just not good. I love the idea and would love to see a better implementation of this, but the amount of time required to do anything is far too high. Especially when early recipes are clearly worthless, so you’re really just investing time for the “future”. It isn’t clear that crafting will ever be worth it, though. 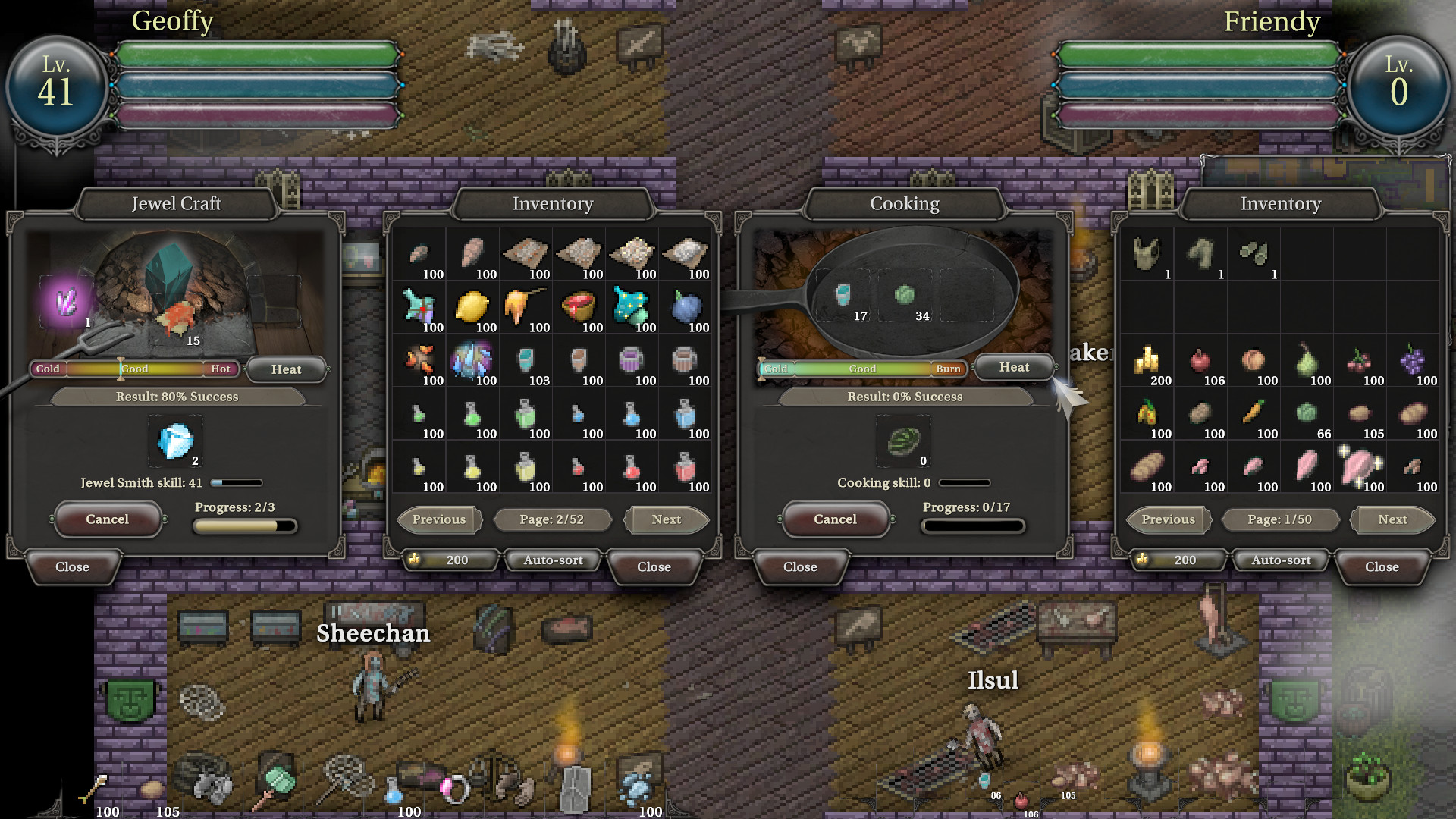 One unique aspect of the game is that you have pets and companions.

Let’s start with pets. You can capture any in-game creature (I think? Maybe not bosses?). To do this, you must buy a lot bait (which is extremely expensive) and traps. You drop bait on the ground, the creature eats it while chasing you (to eat you) and it gets hearts above its head after some baits. Once there are enough hearts, you can place a trap and this will capture the creature. It is then yours forever, resurrecting at specific point in the map. This is kinda cool. But, again, it takes waaay too long to capture a creature. Plus, it’s almost impossible to kite it without attracting enemies around. I assume it gets better after you level up your creature rearing ability a bit more, but the beginning is painfully slow. And expensive, too, which adds a whole other layer of “work” to it.

From the trailer, it seems that you can have as many pets as you want. This may feel great, in a power-fantasy kind of way, but doesn’t make the combat any more interesting.

Companions are almost cool. These are, in a way, like pets, following you around, attacking, and resurrecting at the same points. But you can switch between characters at will! So each companion is essentially a clean slate.

This is interesting – one of my biggest peeves with ARPGs are their lack of re-spec. This almost solves it, especially since “ability points” are the same for every character (you find these in a world, and every character has the same number of points (not a shared pool!), which you spend in the skill book) so you can basically use them as a re-spec-substitute; or, at least, try a different kind of build. Unfortunately, this only adds to the chaos, combat wise. Plus, having a whole other character with its own inventory, individual skills to learn (skills like “long sword” and “heavy armor” which are equipment requirements) and equipment management are extremely cumbersome. Once again, very nice idea, but quite poor implementation. I mean, it gets the job done, but it doesn’t feel neatly designed or anything. 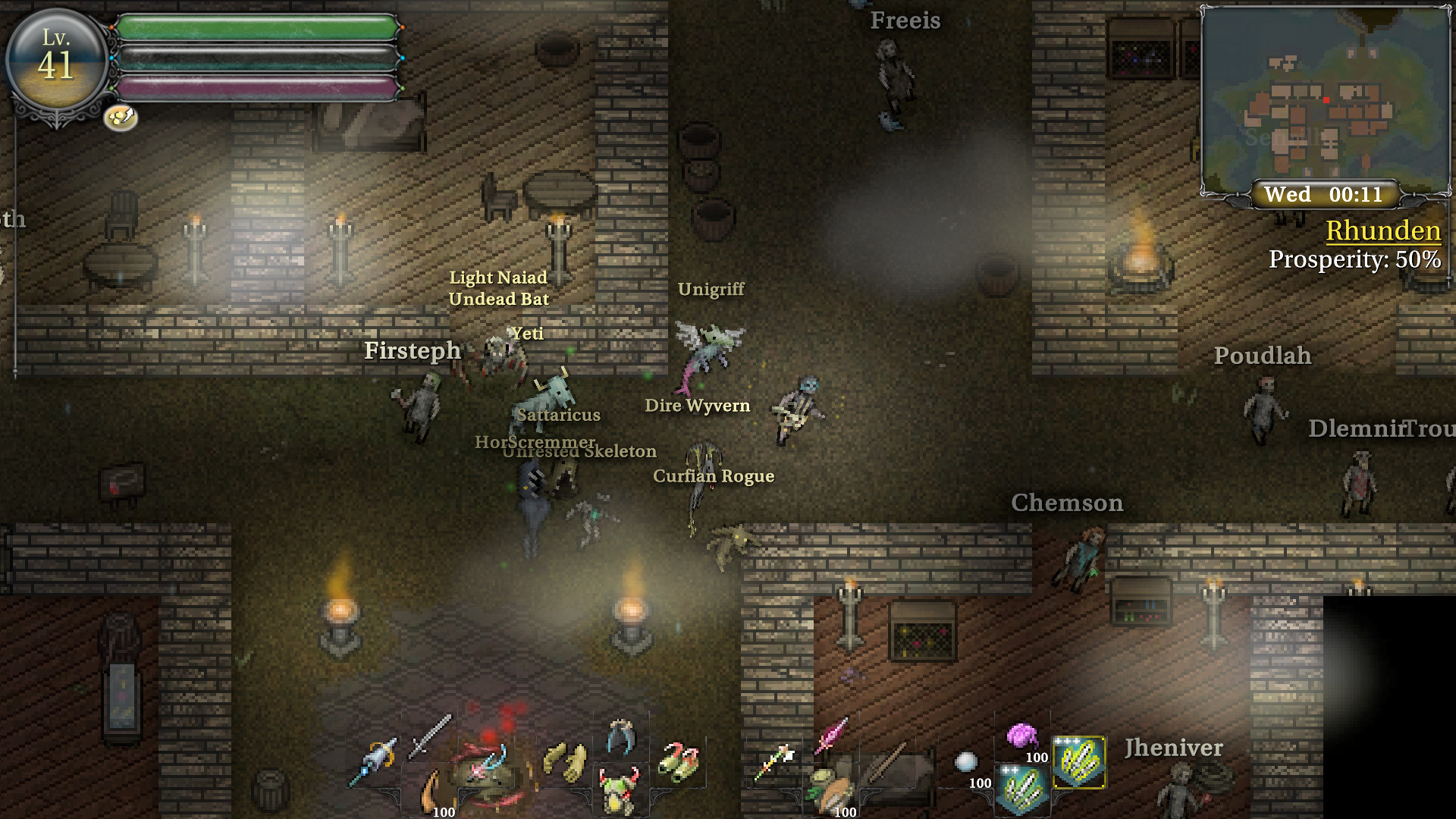 To reiterate, I don’t want to be too harsh on the game. I’ve focused the most important points in which I feel like the game fails as a compelling RPG and the review’s tone is more negative than my overall impression of the game.

9th Dawn III provides a very specific type of experience. There are few RPGs with such a big focus on character development (in terms of numbers and abilities, not plot) these days, aside from MMOs, and this game provides exactly that. If you’re missing such a game, give this a shot! That said, expect very simple and mindless combat and dungeon design, and very light writing and plot.

Ultimately, I don’t want to dedicate much time to the game, but the game is a surprisingly solid package, if you know what you’re getting into.