Why am I doing so much for an unpaid internship again?

In Going Under, you play as Jackie that has recently taken up an unpaid intern position at a startup company named Fizzle. Fizzle, which is owned by a massive delivery corporation named Cubicle, prides itself in their sparkling water that can replace every meal and boasts about their new and inventive flavors. However, instead of interning for the Marketing position she joined up for, to her surprise her new boss puts her on monster killing duty and dungeon diving duty. But wait, isn’t there a rule specifically stating to not go exploring down there? Well yeah, but if you want to keep your intern position you better go down there. 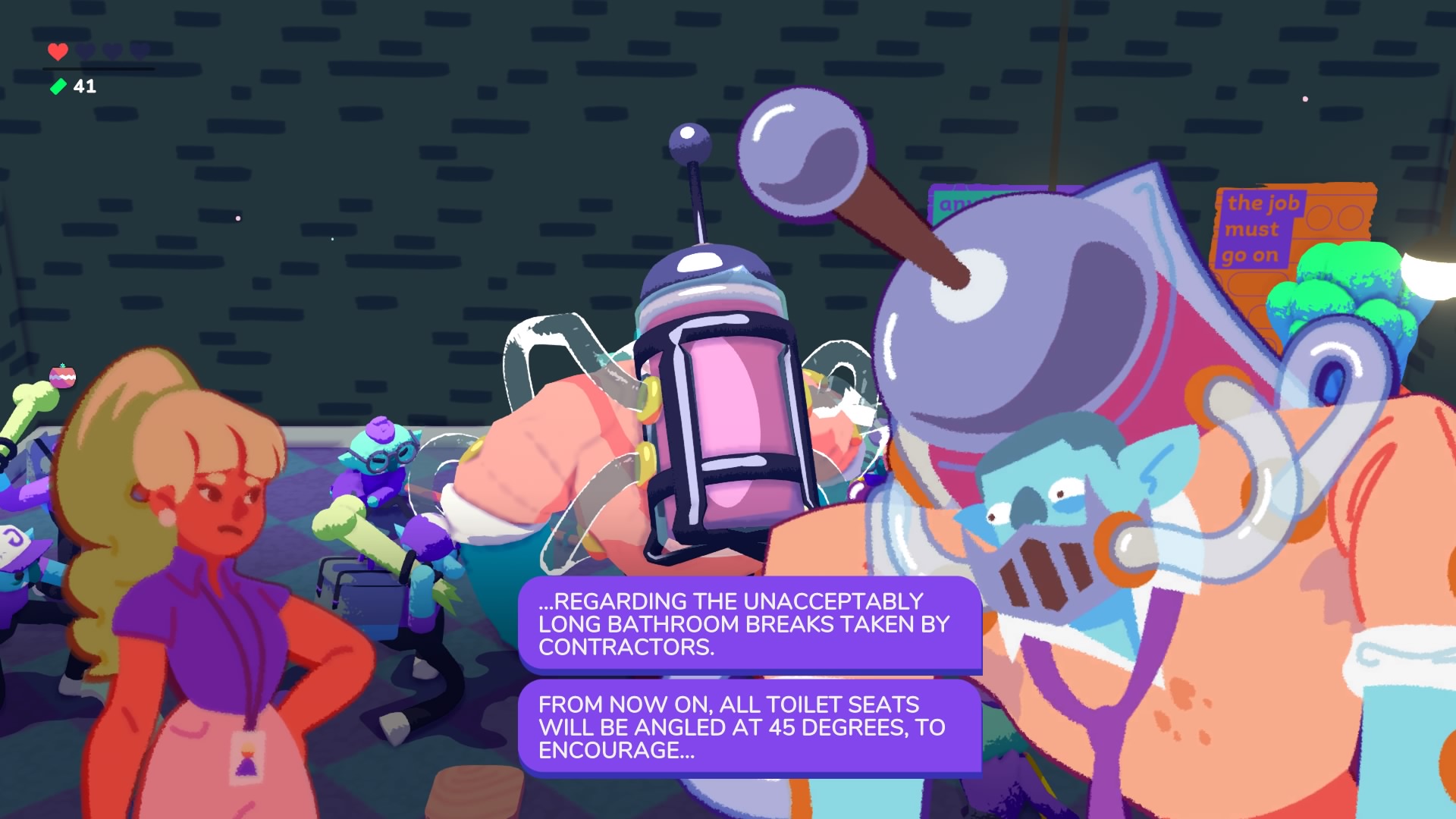 There are three different dungeons for you to explore and complete and they are all failed startup companies. You start out with Joblin, which is a gig economy where the workers-turned-goblins took jobs without knowing what the job entailed until they already accepted it. Not long after jumping into Joblin, Winkydink is opened up so you don’t get burnt out too much. Winkydink, which was my favorite dungeon, is a failed dating app where you don’t use words to communicate, but emojis. Yah you can see why this failed. The enemies here are slimes and demons, with the place matching the dating theme. Last up is Styxcoin which was another company that made their own cryptocurrency and centered it around a rumor that having enough will bring you back to life. However, the value plummeted sometime before Fizzle was acquired and never recovered. StyxCoin’s dungeon centers around actually mining these coins rather than digitally (though there are rigs scattered around still). This also means you’ll be picking up the cryptocurrency for currency and the only way to get cash is to convert it. 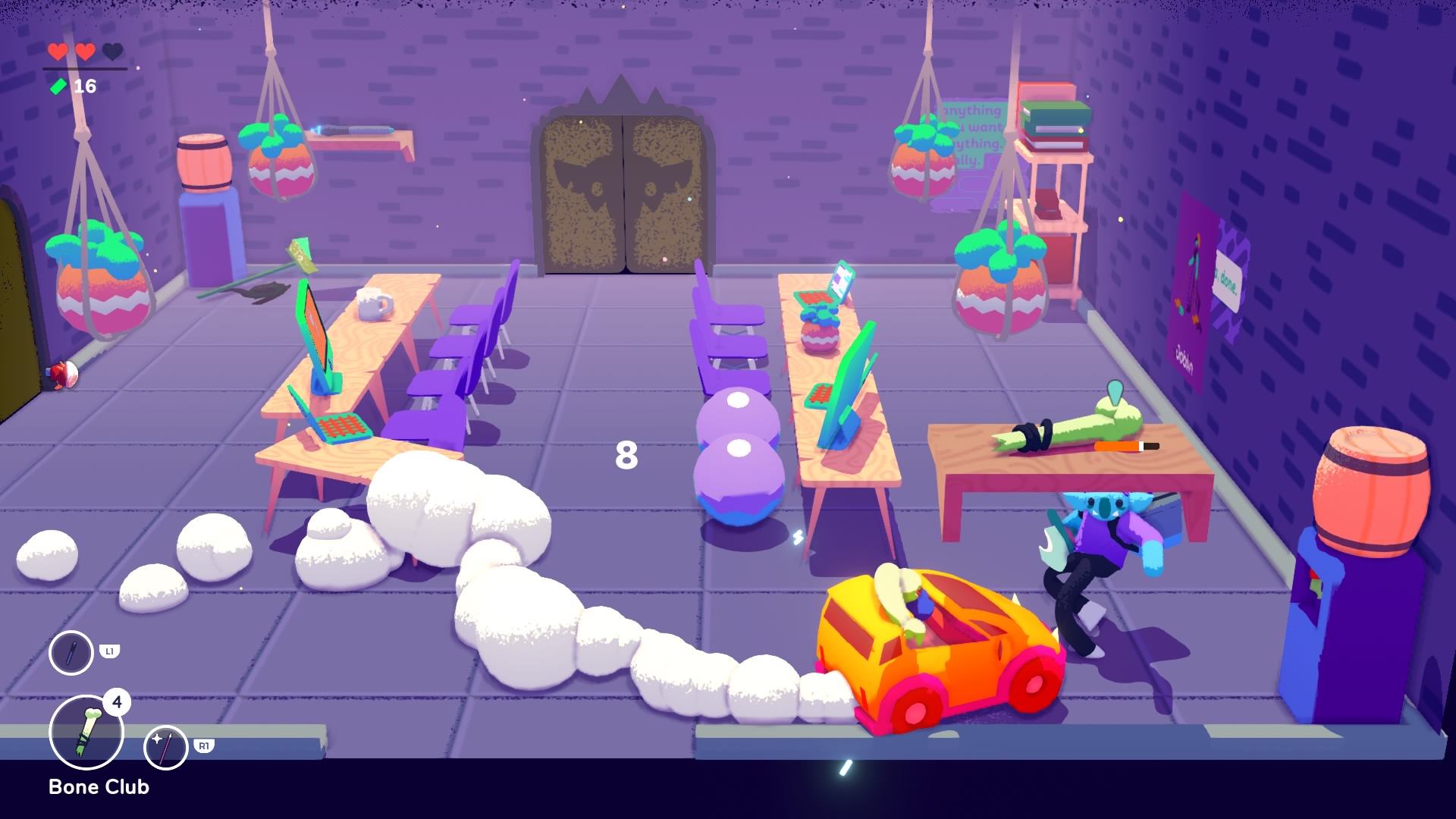 The combat here is easy to pick up, but its still difficult to make your way to the boss. Once you slide down into a dungeon, you’ll be able to use mostly everything you can get your hands on as a weapon. Like that stapler over there or that body pillow. Each dungeon has their own set of weapons, but they all fall under a weapon category like ranged (which if they have ammo can be used to bash over your enemy’s head), two handed, spears, heavy weapons, and so on. In addition, they can have modifiers or have other attributes like shocking the enemy. All weapons have durability, and you can only carry three at a time, but you’ll never get into a situation where you will have nothing to work with since every room is packed with items. Though, when a weapon breaks Jackie won’t automatically equip the next weapon you’re holding. This is die to you being able to attack with your bare hands and you do pick up weapons when dodge rolling if Jackie’s hands are empty, but it can be annoying during a particularly hectic room that you can barely keep up with what’s on the screen. 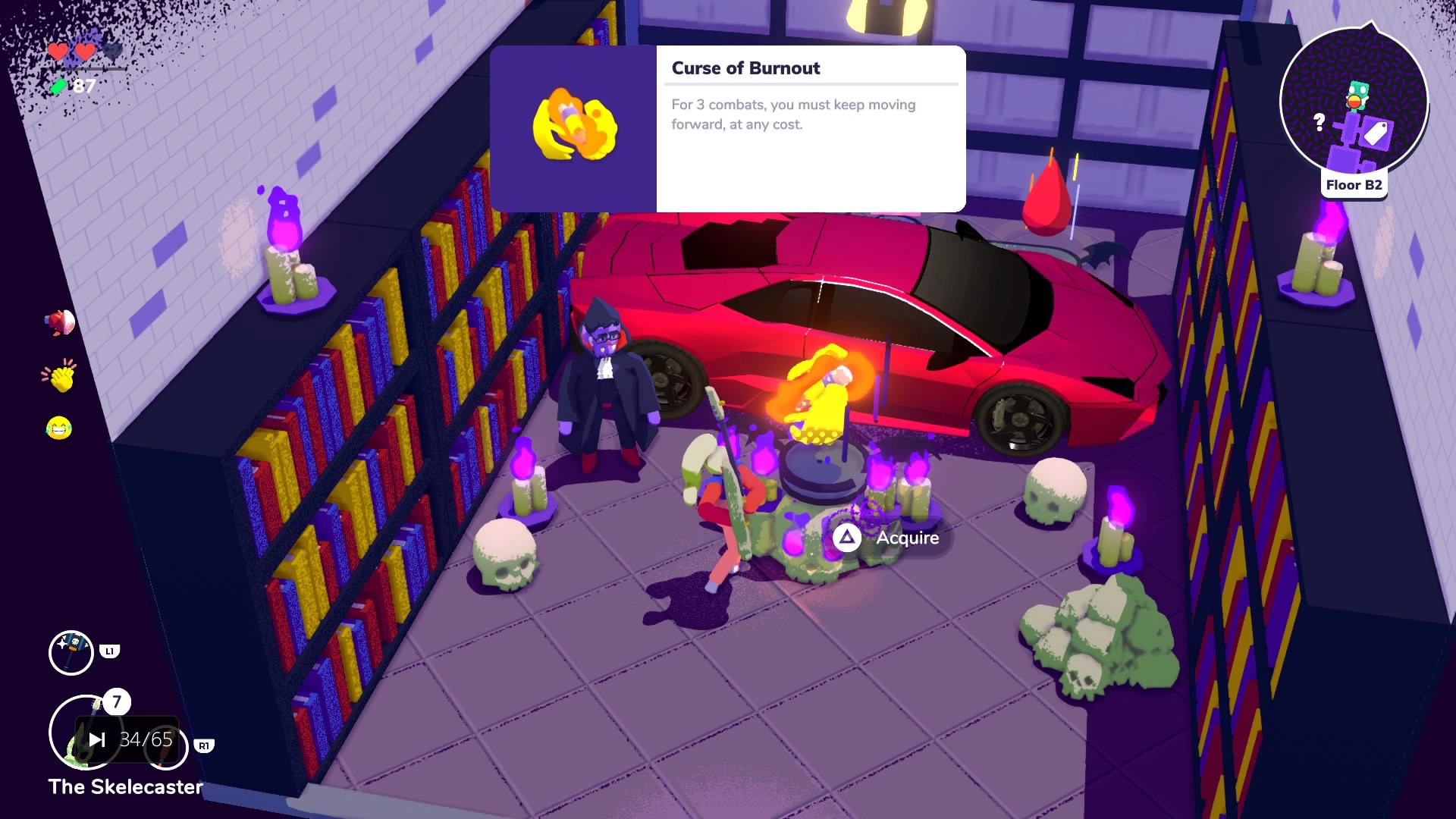 Of course, most of us jumping into Going Under will die a lot and to help with that there are some things to pick up. Each floor will have a shop located someone with that dungeon’s special merchant so you can buy health items, a skill, pick up a new weapon, or just chill. There are also skills, which you can acquire through a variety of ways, which will give you an advantage as these are very helpful. Like increasing knockback or the change to ignite enemies when you focus on them. To get more skills to show up though, you’ll need to buy some at Fizzle with these Cubicle points (which you get as you’re going through a dungeon) and if you use a skill a lot they will become endorsed. As skills will be wiped once you get out of a dungeon, you can equip one endorsed skill so you don’t have to worry about it popping up in a dungeon. However, some skills suffer with having vague description in exchange of being funny. Like the “Yeet” skill, which isn’t obvious unless you’re someone that throws weapons.

Lastly, there’s the Hauntrepreneur which can only be encountered once per dungeon run and will let you take three of his wares only if you take on a curse that will last at least three combats. These curses can be a pain, no focusing is a killer if you have guns or took skills around focusing, but what he offers may be of some use.

Though, you can take up an optional challenge if you’re feeling up to it and think you can survive through it. A room on each floor will be empty with a floating icon ready for you to accept. These are different for every dungeon, but accepting it will challenge you to defeat a group of enemies as fast as you can for a Cubicle delivery in Joblin, fight your date for a chance to gain an ally in Winkydink, and fight for styxcoins in Styxcoin. 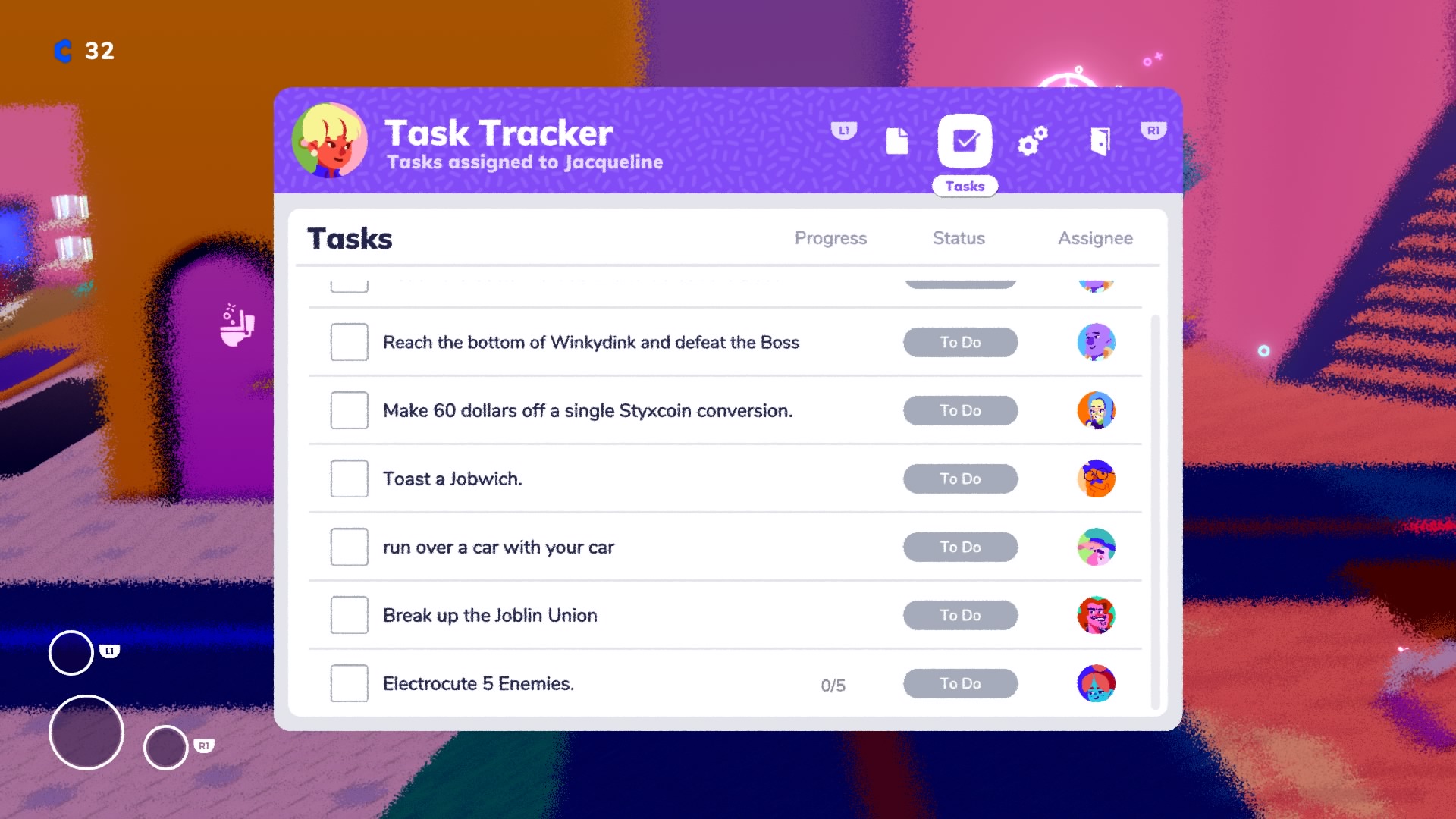 As you are an intern, you can take up mentors as well. Your co-workers will give you challenges to complete, like not dodging until you reach the boss or walking a dog through a dungeon. Completing them will level up your relationship with that specific co-worker and will give you a mentor perks that’ll help you complete a dungeon if selected. Their helpfulness will depend on what you’re looking for or struggling with. For example, you can have the Accountant Tappi as your mentor to get a bit more money and a delivery service if you struggle with money or even have Fern the Flavor Officer so you can weaponize the Fizzle drinks to your advantage.

However, I recommend completing most, if not all, of the challenges as you get them rather than mainly going in to complete every dungeon. This also goes with unlocking the different skills and endorsing them. I made sure to pick up skills that are still in progress if I could while I was doing the challenges, but this isn’t really needed. The reason I recommend this is because there are two halves to Going Under. After you defeat all three bosses to get their Relics, a portal will open up. This is sort of a point of no return as going in and completing it will push you to the second half. Where the dungeons becomes harder due to being longer, a touch of redesigning, new enemies, enemies are more aggressive with more health, and the bosses will give it their all to not lose this time around. 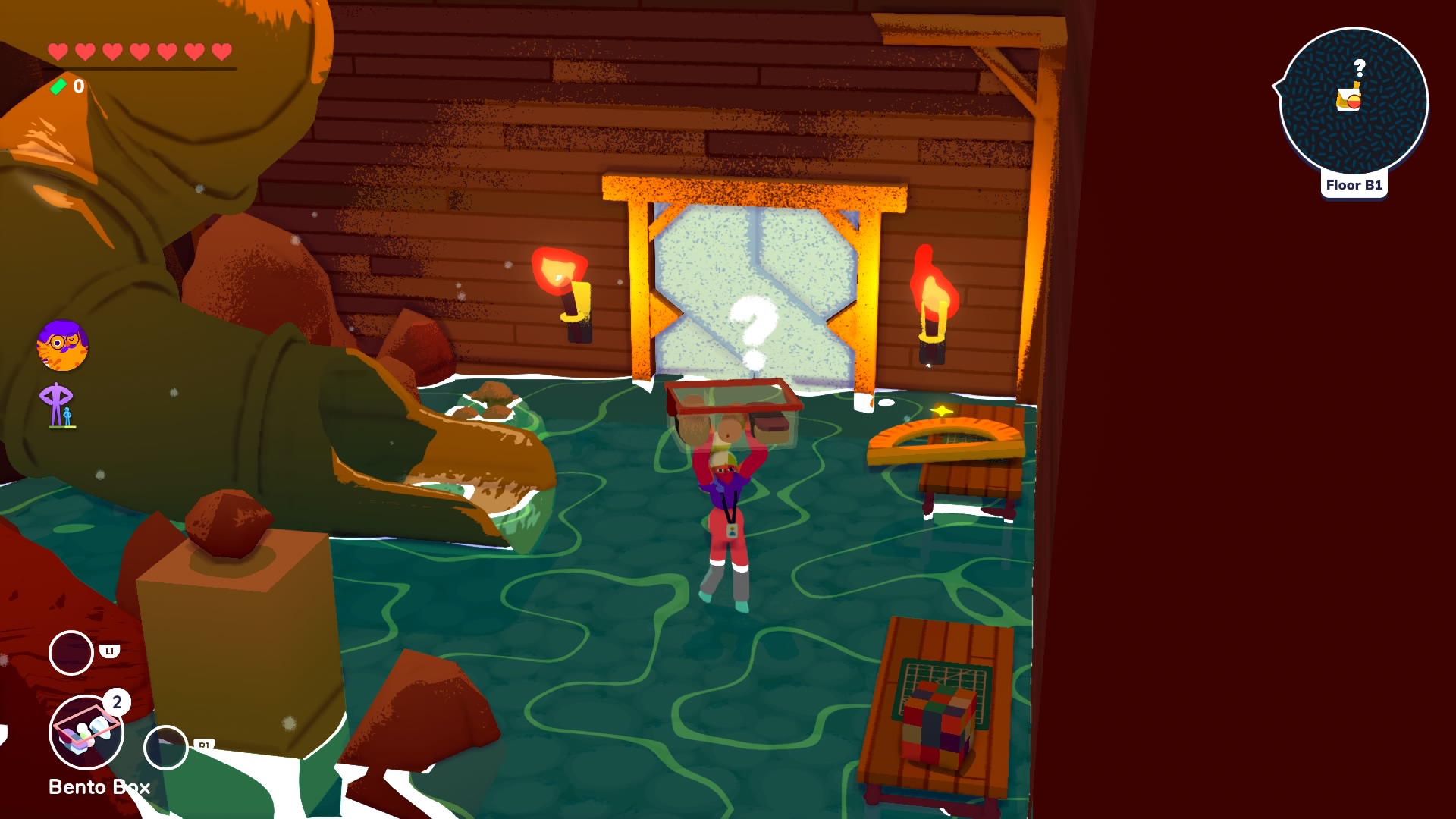 That’s not to say that I didn’t like the second half as well, it was quite interesting noticing the differences and trying to figure out how these new enemies attacked. Especially when you went through the dungeons a lot whether you’re just bad or you’re doing the challenges. It’s just that this difficulty spike will make it harder for you to complete the challenges and you either have to be someone that assumed it would be a point of no return, had prior knowledge it was, or just wanted to do the challenges before continuing through the story. On this half of the game as well, I’m really surprised that there weren’t any new dialogue past the story-related ones. Your co-workers don’t talk about what happened to them or how they’re dealing with the changes and even the merchants don’t talk about the upped security or how their bosses changed.

For people that are having a difficult time or just what to adjust something, there are assist setting that you can mess with. You can give yourself more health, give weapons more durability, have enemies with less health, and more. 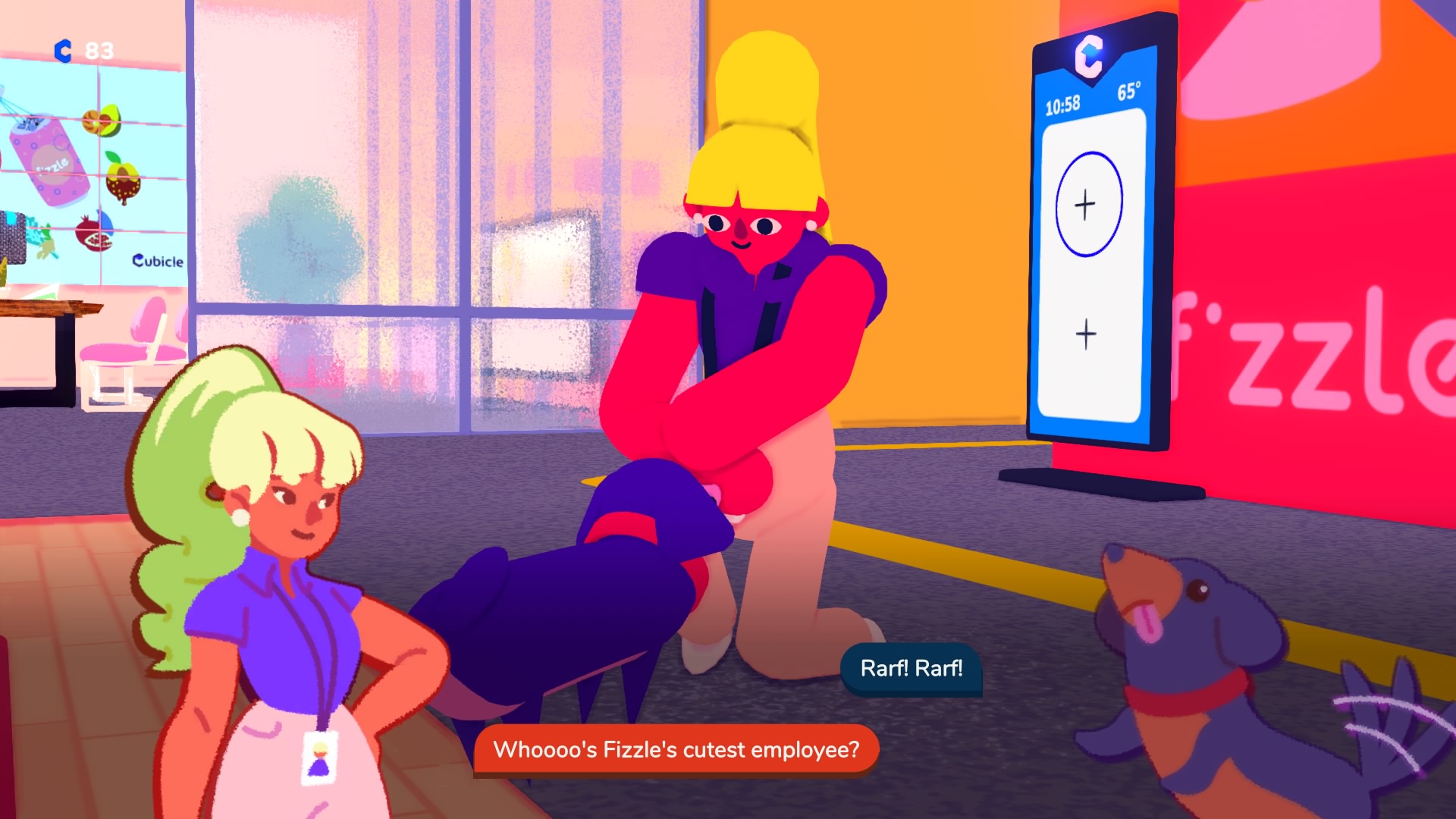 This satirical dungeon crawler was pretty fun to go through despite some caveats. It’s a difficult dungeon crawler even when you have everything in your favor, the story is fun to go through as Jackie, and the satire around corporations and capitalism is handled well. I also love how each dungeon was different from each other, which considering that there is only three had to be done, and while durability is annoying the fact that mostly everything can be used as a weapon helps. There is meme humor, but it’s not annoying to the point where it’s everywhere, it’s mainly in the items and skills you pick up with a few sprinkled into character interactions. However, throwing items is cumbersome to the point where I barely did it, weapons don’t automatically switch when broken, and the second half introduces busy battles that can be hard to keep up with and weirdly doesn’t introduce new dialogue. Either way, this is worth checking on if you’re interested in roguelikes. Depending on your skill, this lasts at least 10 hours and the developers have announced that there is more to come next year.