Take on the role of a hunter-for-hire, hunting bandits, monsters, and beautiful women.

Void’s Calling Ep 1 is a visual novel style adventure game. A warrior-for-hire Forlan arrives in a small town and notices that several things seem off about it, suspecting the presence of evil energy of the void to be around. He decides to stay in the town and to look around, to complete some quests, and to sleep with pretty women, lots and lots of pretty women. 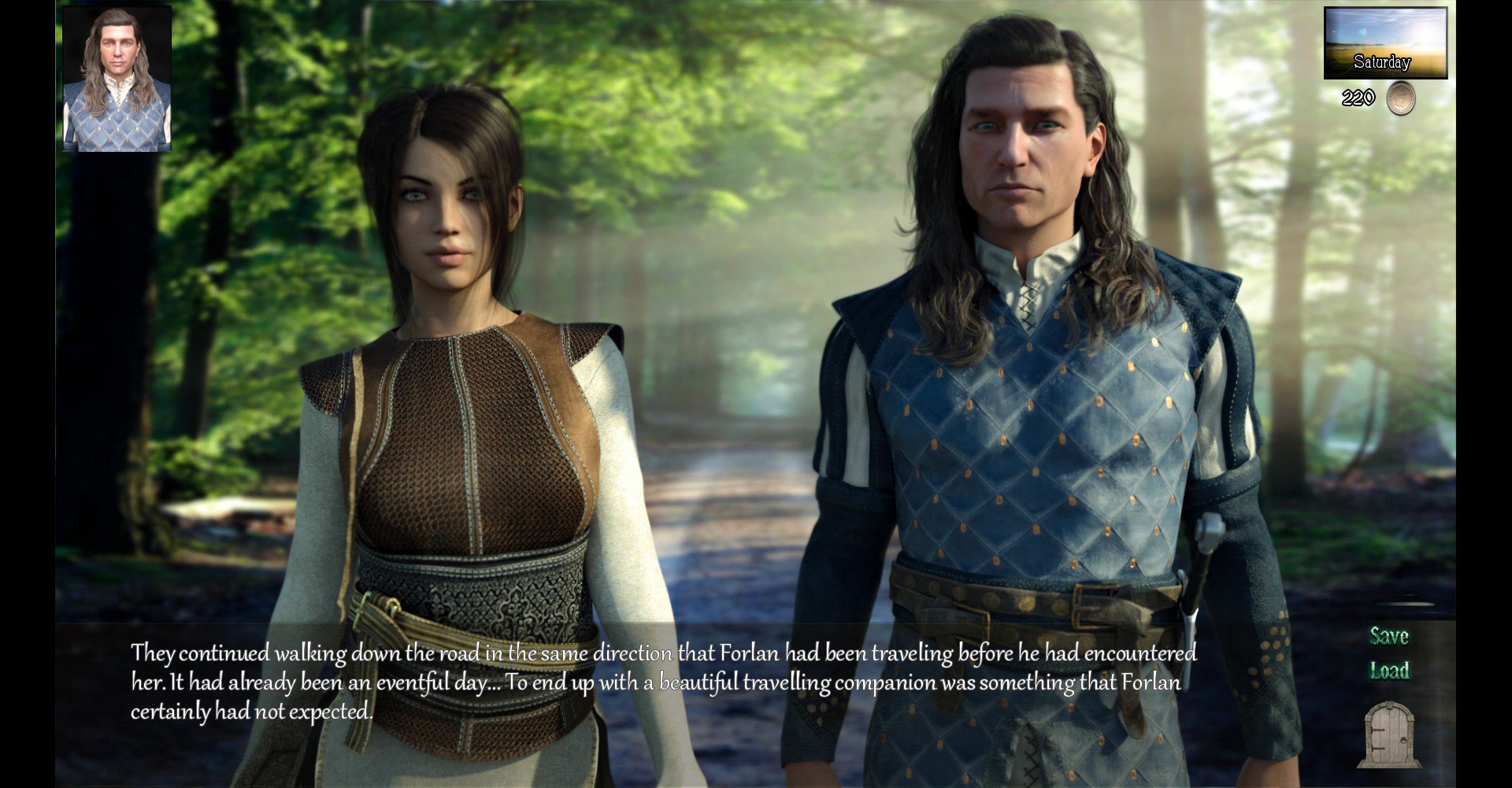 Once we’re in town, the main quest quickly gives way for sidequests. The game has a somewhat different structure to what we come to expect. Our activities in town cause the time of day to progress, and once the day ends, we go back to the inn to sleep, and then get back to what we were doing the next day. So, the different quests can be triggered and completed in our own convenience and in any order really. In some ways it’s flexible, but on the other hand, this type of progression lacks direction. It’s easy to feel like you’re simply stuck in a loop of doing the same things and not making any progress.

It’s quite clear that the character Forlan was inspired by Geralt from The Witcher series. He’s a skilled warrior who takes jobs to hunt down monsters and evil creatures in exchange for coin. He even has a similar look to Geralt, with long silvery hair and all. Although he is a bit more of a smooth-talker and less blunt.

A big aspect of the quests we take seems to be pursuing different romance options, or rather, they’re less like serious romances and more like just wild fun. There are many different women we can have this wild fun with, some can be bedded right away, usually in places like brothels, while others require a chain of events and tasks to be done first. We can bed three different women in a brothel, a waitress at the inn, the innkeeper’s wife, a hot masseuse, a cute young herbalist, the young herbalist’s equally cute mum, and I’m pretty sure there are more that I’m forgetting. 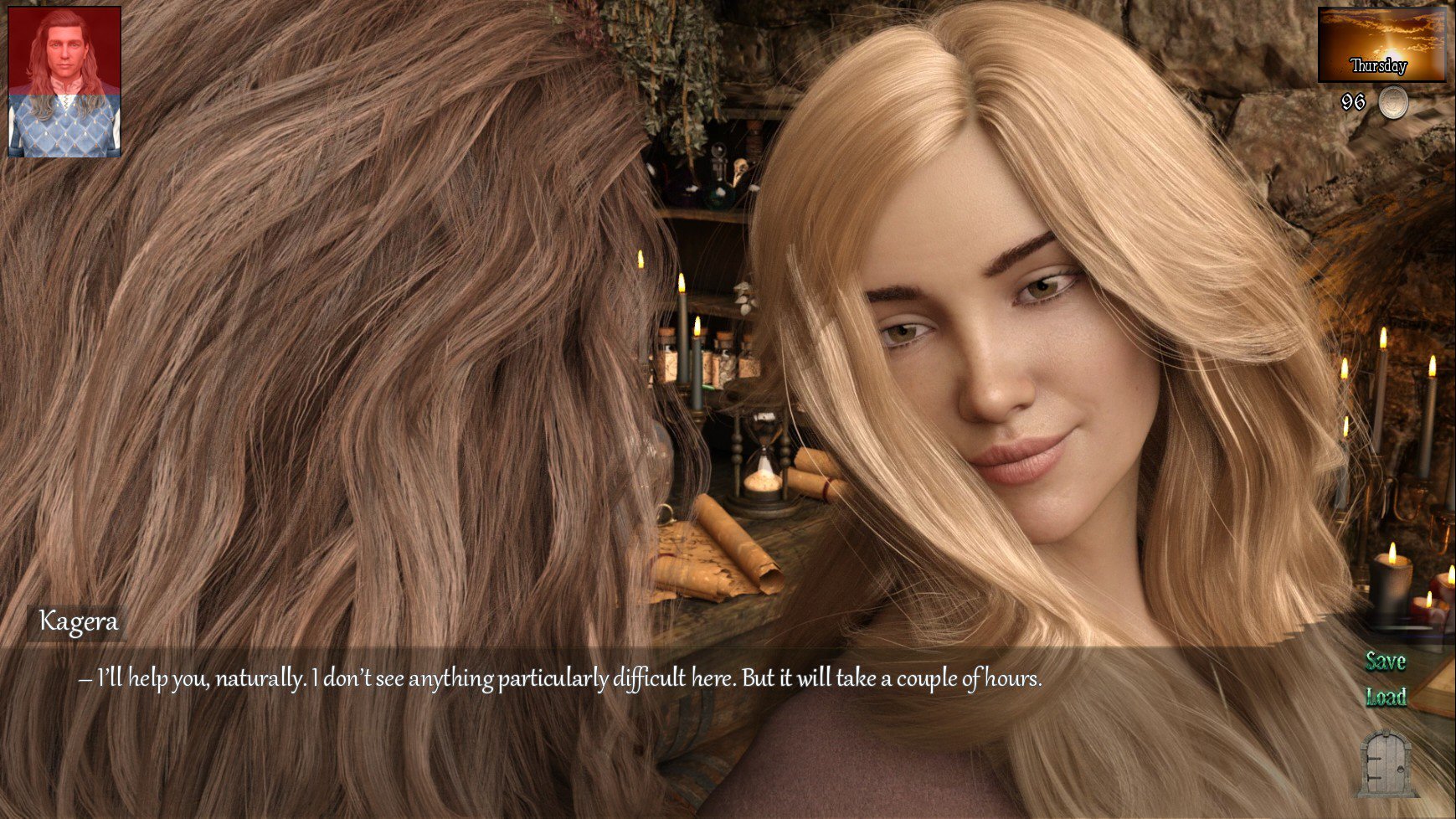 In fact this aspect of the game takes the front seat and becomes the focus. It quickly starts to feel that we’re spending less time on whatever mission we were meant to be doing and more time on fooling around with random women. A lot of the intimacy scenes have a written narration, giving us Forlan’s thoughts in the moment and explaining in really great detail what’s happening and what he wants to do with the woman in that moment, even though we can see it all in still pictures too. The way it’s all written often feels like some sort of erotic fanfiction or something akin to a ’50 Shades of Grey’ but for men.

As mentioned previously, the gameplay is set up to run as a day-by-day set of events. There are 5 times of day, and each time we do an action or witness a scene, we move to the next phase of the day. Once it’s night time, Forlan goes to sleep at the inn, and next day everything is back to normal. It’s a rather interesting but also a strange design. Aside from one event (a town festival) happening only on Saturdays, I am not sure if there’s any other purpose to having this type of day-by-day progression. Moreover, the days can go by very quickly without you having accomplished anything and only engaged in a few dialogues.

This is not so bad by itself, but the main problem is that it costs money to stay every night at the inn. So, as every day passes, your money keeps constantly decreasing, and money is needed for many things in the game, mainly for completing the sidequests with women. Most of these sidequests have the same pattern of you needing to spend a lot of money on something to gradually escalate every encounter you have with a woman. With some, like the masseuse, this can go on for very long. Each time you visit her, you can escalate things only by baby steps, so in the end you’d have to visit her dozens of times before you can complete her sidequest path, and each time it’s the same ritual except for one minor change. 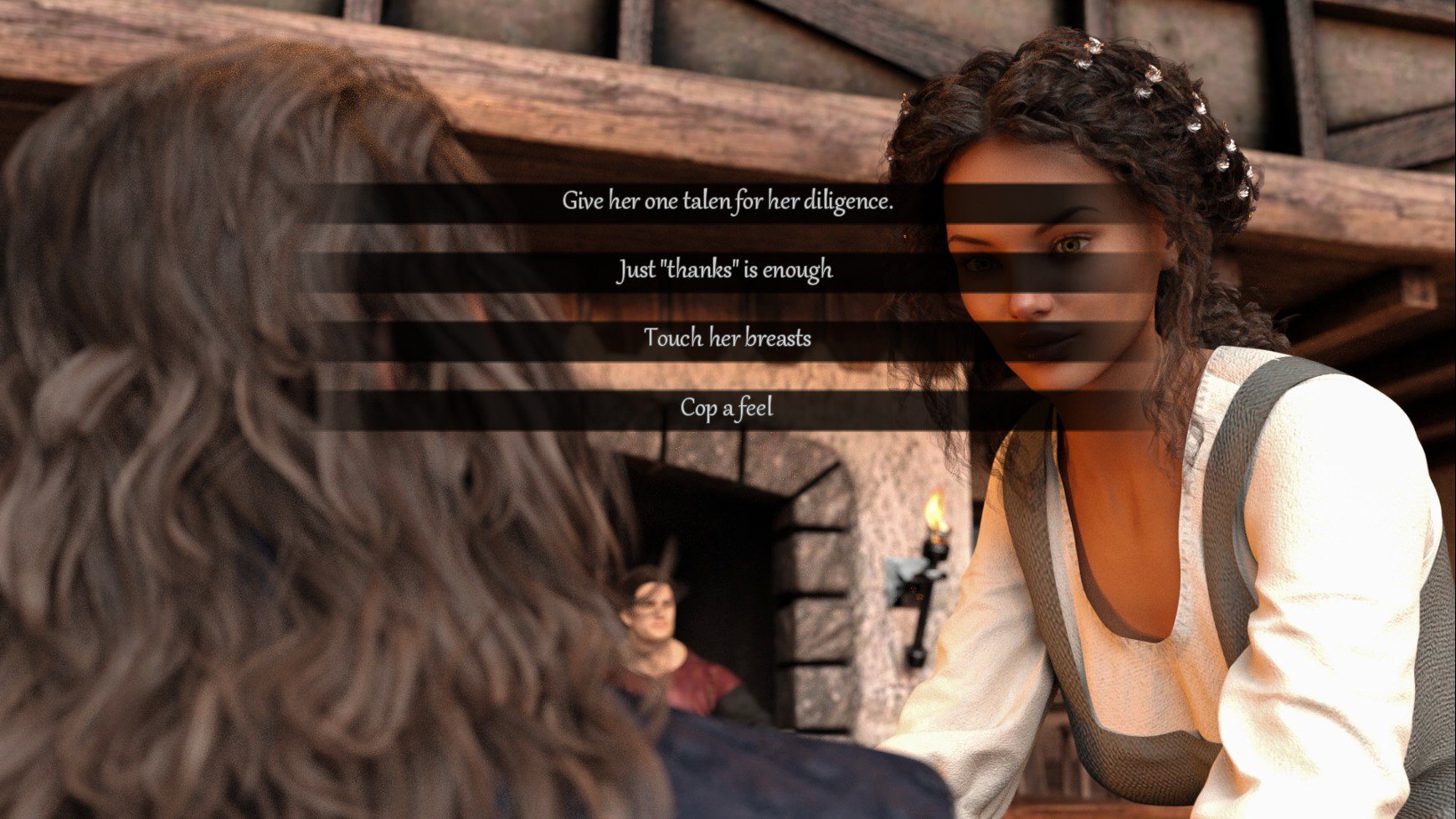 Although at times we are just watching one still image after another in a form of a cutscene, at other times we get to pick dialogue options, which is much more interesting and allows more engagement from the player. Although here too, it often felt like the game forced you into a particular personality archetype – being a self-loving womanizing asshole, rather than acting like you would act in real life. 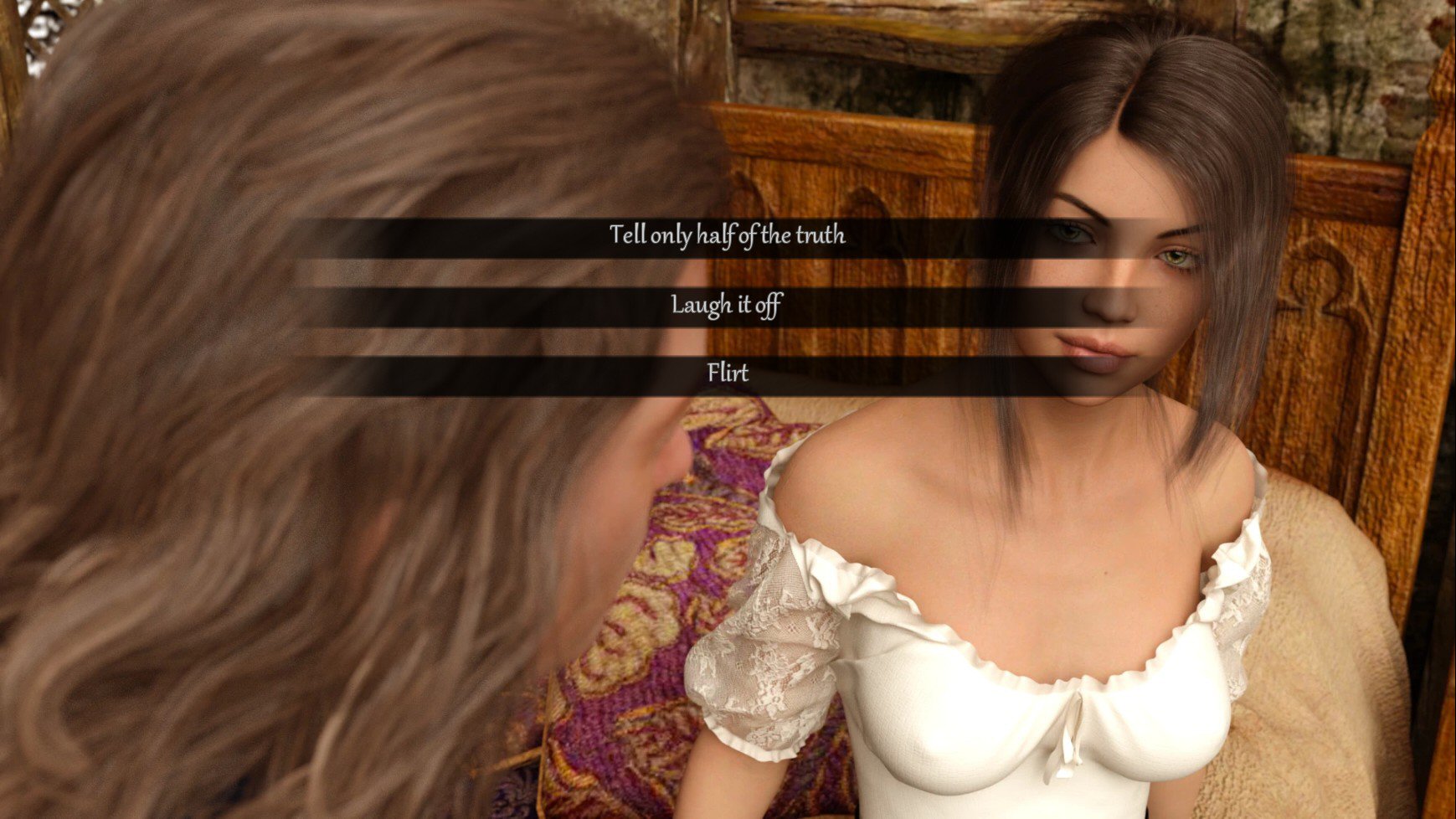 Lastly, another major aspect of the gameplay that’s worth talking about is the combat. Yes, this game has combat. Sometimes it comes up during quests, but most times you’d engage in it by simply exploring the wooded or riverside areas outside of town. Why would we want to get into combat intentionally, you might ask? Simple – grind for money. You can sell loot to a shopkeeper and get money in return, which you then squander on bedding women. 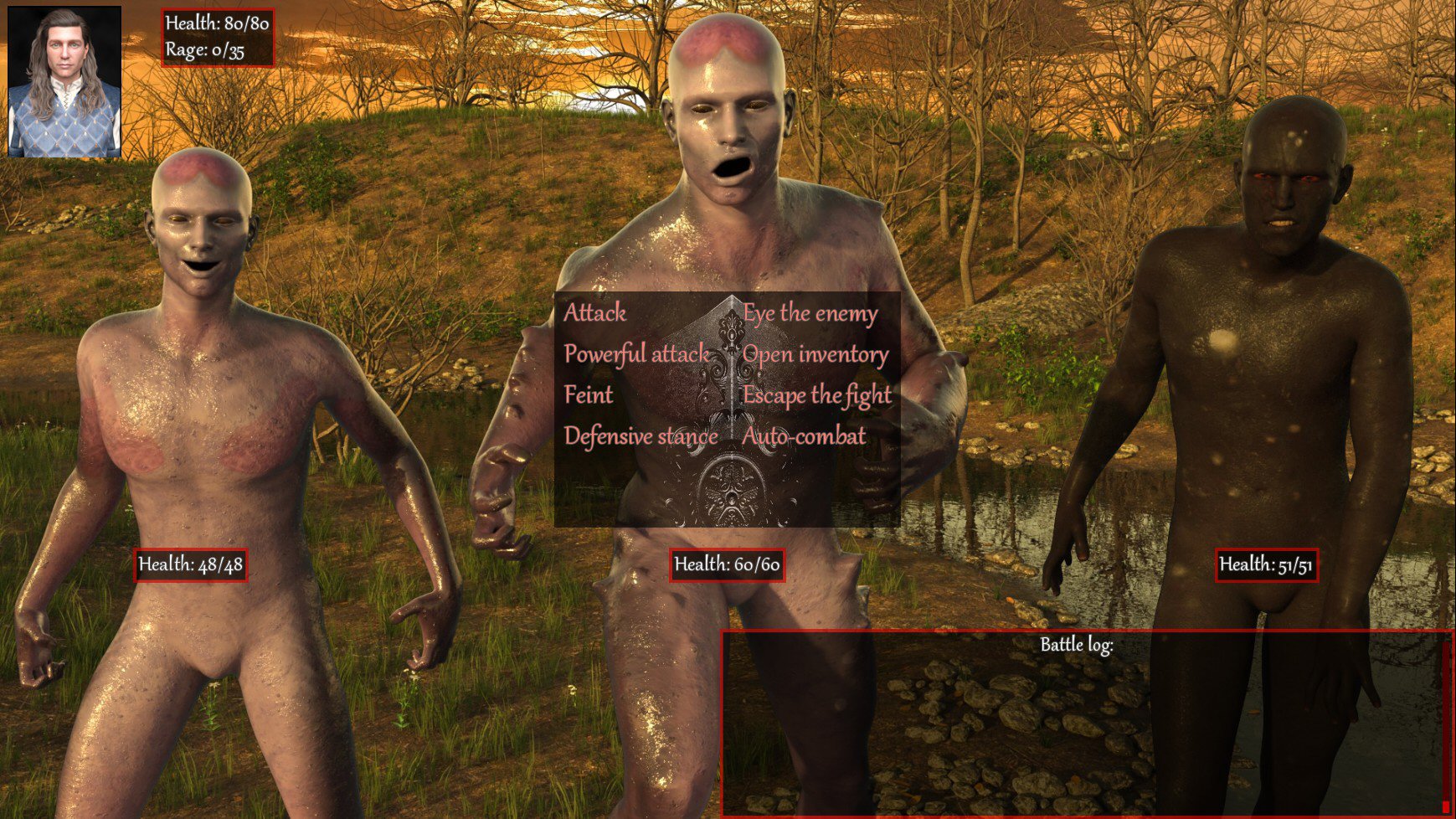 The combat system here is turn-based – you take a turn, then all the enemies take their turns, and repeat. It’s a very barebones system and to me brings the quality of the game down even further. It’s probably one of the most tedious turn-based battle systems I’ve ever come across. You have 3 types of attacks – a normal attack, a powerful attack, and a feint (quick attack essentially). Powerful attack does more damage but has a higher chance to miss, feint is the opposite, and normal attack is something in between. In combat, we need to figure out which type of attack works best on which enemy type, depending on whether the enemy is agile or more tanky. This is not a bad system in itself, but the way it’s executed is just clunky and unpredictable. You could go from doing no damage to an enemy, to scoring a critical hit, to entirely missing the target, all with the same type of attack. It feels too random. At times you’d ask yourself why did your attack deal no damage to a target that’s not tanky, only then for you to score a critical hit the next time you attack them. Most times you’d just find yourself gambling and trying out your luck with all 3 different types of attack just to see what happens and if you get lucky to score a critical hit.

And it’s too bad that you can’t avoid combat in this game, because you need to sell the loot for coin, and the coin is needed to make progress in most of the sidequests (and also to simply be able to afford to stay at the inn every night). So it’s like a repetitive grind cycle that forces you into engaging more with the game’s worst-made mechanic.

As far as visuals, the game does really great job. It’s presented mainly in still images as a visual novel. The still images are all setup well and convey the setting and the scene believably. All characters have had a lot of effort given to their 3D models. All the female characters that we can seduce are good-looking in their own ways, but even the other NPCs have also been given a lot of attention too.

The UI is also pretty good. The little thumbnails in the hub areas that refer to specific places or actions are all greatly presented and make it easy to navigate around the city area when going about our quests. I do wish it was possible to access our quest log in every screen though and not just in the hub areas (unless if there’s a hotkey for it, which I don’t think the game ever mentions). 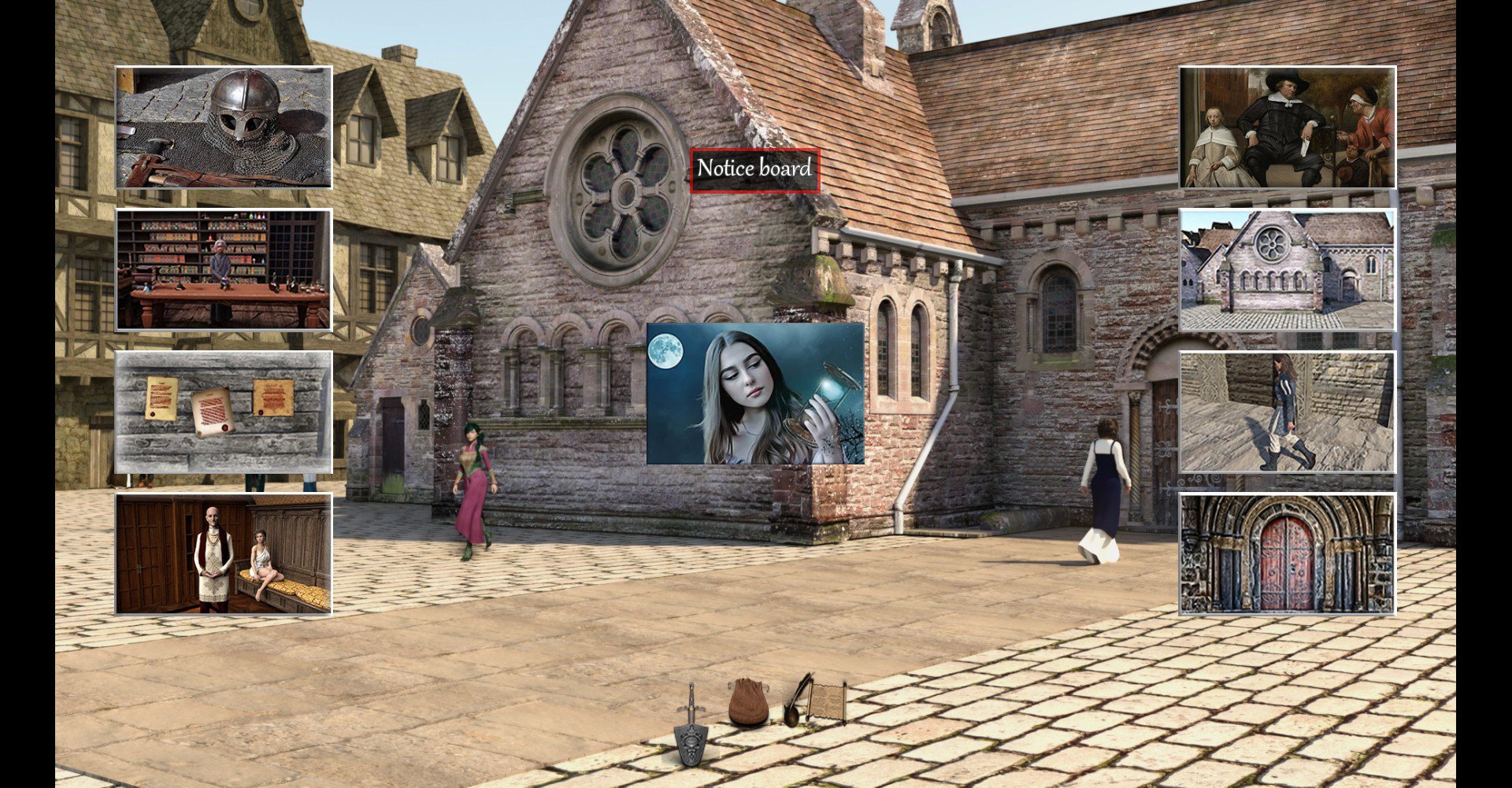 Some of the sex scenes are done as loopable animated videos. It’s clear a lot of work went into making them look smooth and believable. Certainly if sex scenes is what you’re after in a game, then this game sure delivers on that front.

The music is generally not bad. It fits a medieval fantasy setting. Some of the tracks can feel a bit too repetitive and jarring though. So, maybe some more variety in music tunes would’ve been good. But generally, it’s not a major critique.

There’s no voice acting, but it’s not necessary for a game such as this as it’s more of a visual novel. I do, however, think that the game could use some more sound effects, especially in combat. The combat system is already tedious enough with its mechanics, and having absence of any sound makes it even worse. There’s no feedback whatsoever when delivering or receiving hits, aside from the enemy going back and forth between 2-3 images.

Overall, the game has some good aspects, such as the visuals, the locations, and the setting idea, but it’s brought down by a lack of direction or any sort of coherent plot, too much of an erotic fanfiction vibe when it comes to romance, and perhaps worst of all – the incredibly tedious and unfun combat system that just feels tacked on just for the sake of having some extra gameplay mechanics. I think if the combat system wasn’t in the game and there was no grind for money that comes with it, the game could’ve easily been a ‘Save for Later’ rating from me. But as it stands now, I just can’t bring myself to recommending it, even though I really wanted to like it. Those who are mainly after sex scenes should gain some enjoyment from it, but aside from that, everything else just feels barebones and too basic.