When the store page said it develops into a dark drama, I did not imagine this.

When a mystery pop up, whether it’s a work of fiction or a real life case, those that know about it want to know what happened. What happened on the day that they seemingly disappeared, why they were targeted, who was responsible, or what was their thought process if it was self inflicted. While many real life cases won’t get a clear picture, reasons from it being too long ago or the people involved just won’t tell anyone, at least in fiction it’ll be unraveled in front of your eyes.

In Jessika, you work for a company that specializes in retrieving data from deceased individuals to give to their family or loved one that requested it. The company will help in retrieving usernames and passwords or go through their digital footprint for particularly hard cases. The family could request these services for various reasons spawning between wanting to retrieve photos for memories or to try and figure out what happened. The job you get is from a father who is distraught over his daughter, Jessika, killing herself and asks you to figure out what was going on leading up to it. Luckily, she taped video diaries. Unluckily, most of them are encrypted. 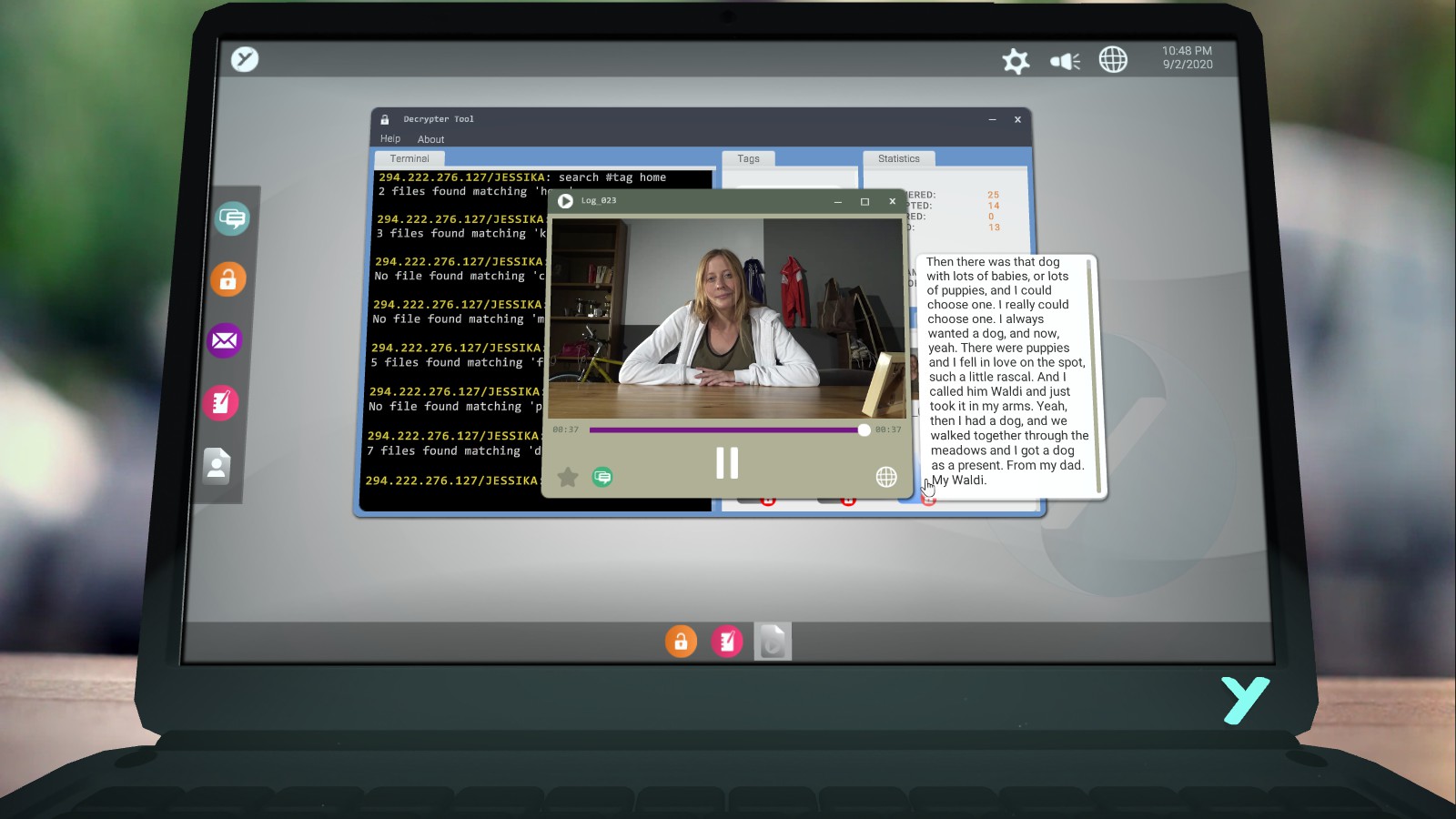 If you ever played Her Story, you’ll be right at home with Jessika. Taking place in an in-game computer in a cafe, you’ll be going through a bunch of videos in an attempt to solve this mystery. You’ll be going through an decryption tool and type in various keywords. If a video matches it, it will show up in your results. However, some are encrypted and you won’t be able to access them. These vary from when you’ll be able to view them by color, but you just need to watch more videos to unlock them. The decryption tool does save the keywords that brought up results or you can simply star these locked videos (or sometimes scans) so you can easily go back to them. For the video themselves, you can either choose to listen to them in their original language, German, with English subtitles or the English dub.

In addition, you’ll also receive emails and messages as you listen to Jessika detailing her early life and slowly showing her true colors. The emails are mostly spam, but the messages are from your coworkers and Jessika’s dad. Some videos will even have an option to message your friend (who also works at the same company) about what you found and to the dad and may be needed to progress. Though, the icon you’d click is easy to look over and this is highly dependent on you finding the videos in the correct order. In my playthrough, I found out that she had a sports injury and talked to the dad about it, but then I found a video that is chronologically before it and it acted like I didn’t know.

However, this game isn’t without it’s annoyances and (personal) nitpicks. First, at the half way mark, you’ll start getting these glitches. Apart from the ones that are cued by the story, the glitches will minimize the window you’re on and/or distort a video’s audio if you’re watching one. This technically works out in-universe, since your computer does get invaded by a hacker (maybe don’t work on a cafe’s wifi network), but with how frequently this happens it became annoying. I just want to watch these videos and find out the context. It also doesn’t make sense why the visual cue for the glitch isn’t isolated to the in-game screen. On that note, I don’t really see the point of having an in-game screen. Apart from what happens at the end, I don’t see any reason why it couldn’t be just your screen so you have more room to work with. 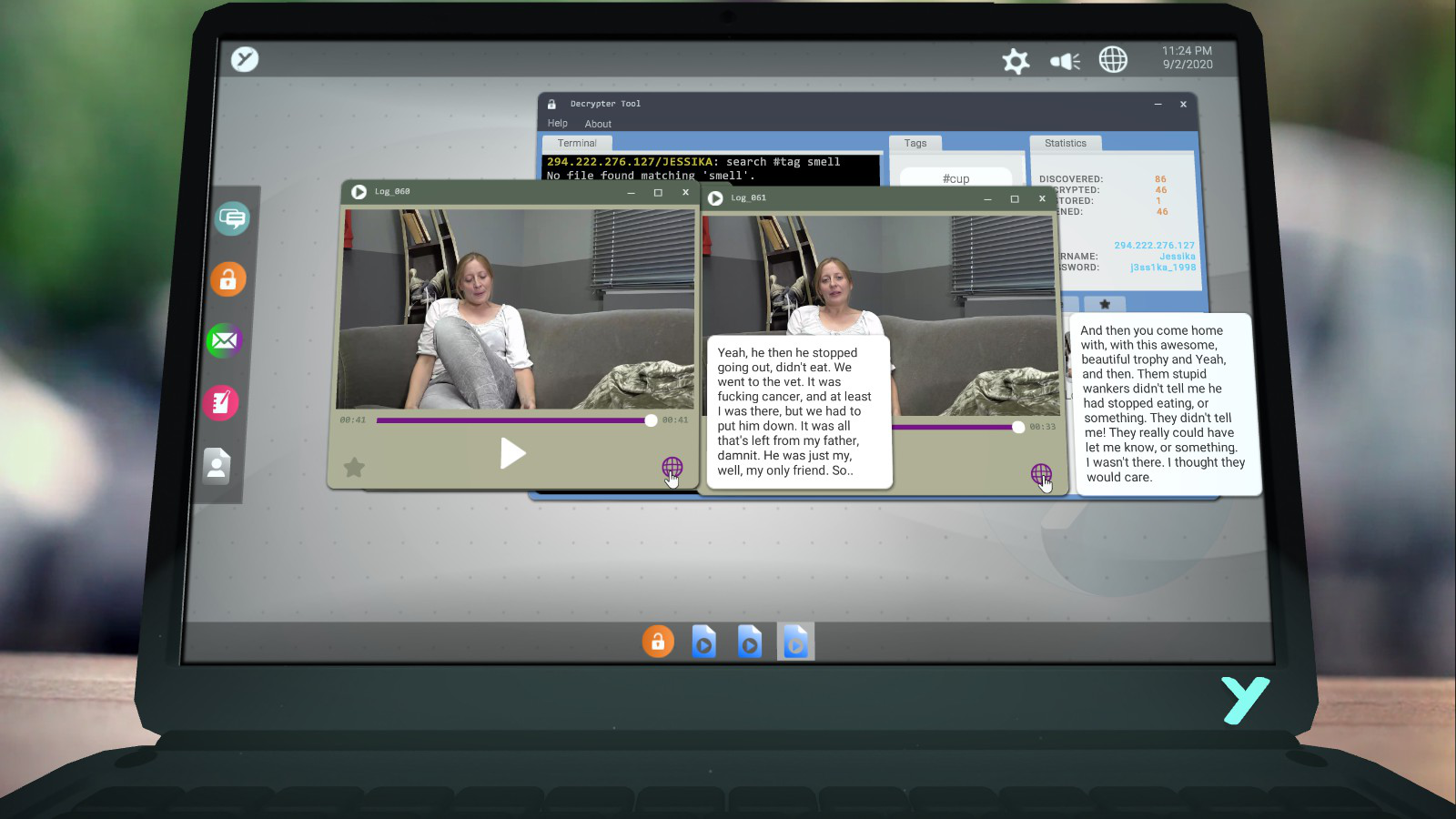 For the videos, you have to enable captions for every video since it shows up on the side, these can mess up to where it cuts works together (mainly happens if you fast forward the video), and despite the captions having it’s own window per-say they don’t keep the captions up and you’ll have to watch it all over again. The translation, while good most of the time, does make some videos confusing with how it got worded. Lastly, for the clips that are supposed to be together chronologically and it’s obvious that they were taped at the same time, some don’t blend into each other that well. This could be due to the translation, but it could also attribute to the fact that it was scripted with the player not finding them at the same time.

Also, I wish there was an easy way to put all of the clips together in the correct order so you can see the change and get everything in context as they are told.

The ending is unsatisfying and it weirdly comes when you haven’t watched most of the videos. It leaves you with more questions than it answers and it left me with a “wait, that’s the ending?” once I got through all the videos I didn’t get the chance to look at and realized it. I’m going to go into spoilers, so skip to the verdict if you don’t want to hear them, but just why. Since she was alive and in reality joined (created?) a terrorist cell, why have you watch all of her videos? How much of the early videos were true and how many were just made up to get sympathy before her true colors showed? What was her goal anyway? Was she trying to radicalize us without direct contact or did she just set this all up so she can hack into whoever would have gotten this assignment to bomb where they were at (which in our case, the cafe)? If it’s true that Jessika taped all the videos in like a week, it at least make sense why these clips seem more like it should have been a couple long videos. What did my co-workers think and do they know the truth about what happened? Are we her sister and that’s why we were targeted and this was just a whole “look at what you being born did to me” deal? 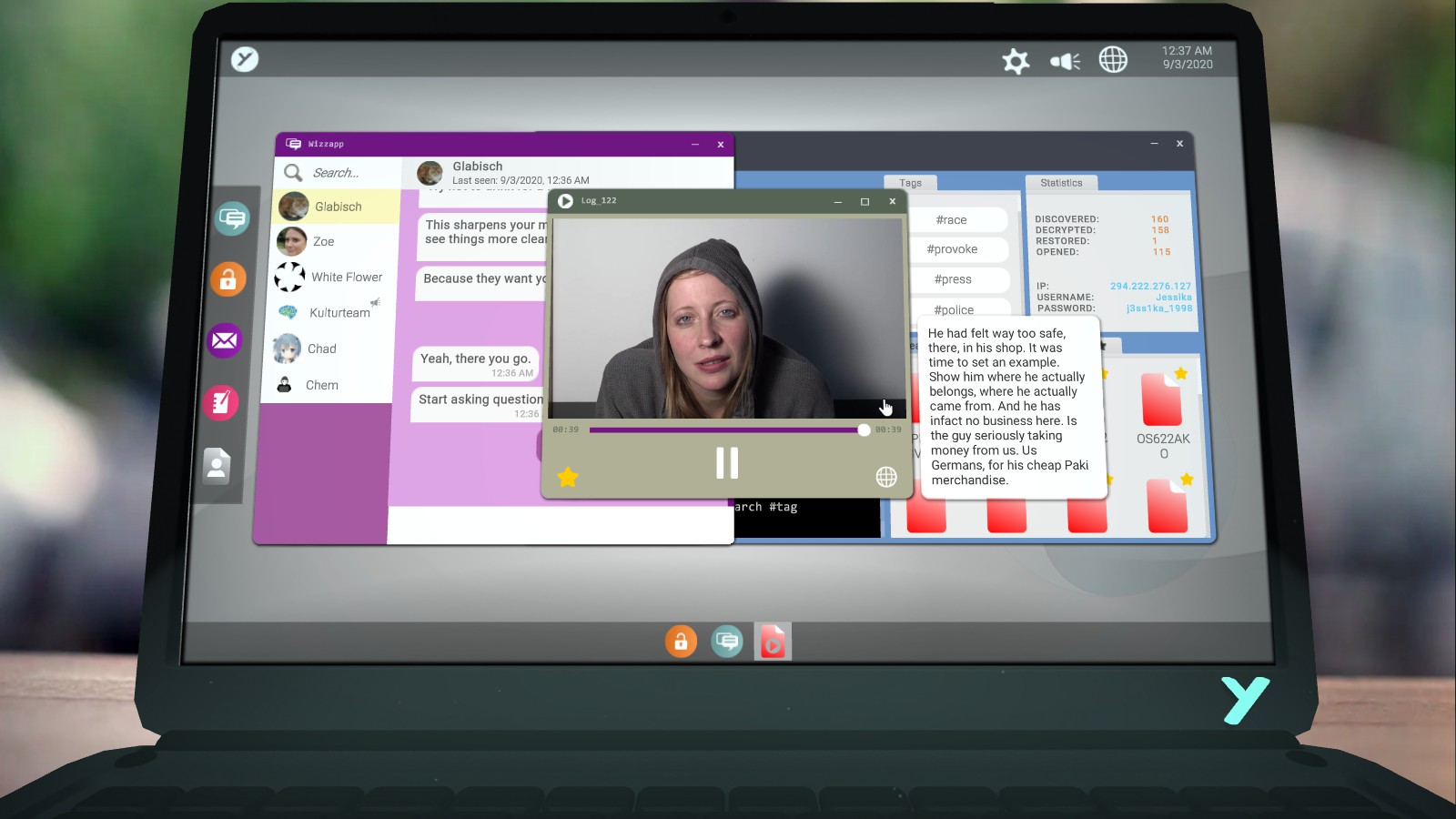 Ultimately, I feel like I didn’t end up enjoying Jessika as much, but it’s interesting with how it was tackled. The premise, the shift you see in Jessika, and the twist was interesting and the actress was honestly great. It also does a decent job at showing how someone can start hating and doing terrible things thinking it’s for the best for their country (interestingly enough, the story is inspired on true events). It certainly hits on an important topic and relies on you hopefully not agreeing with Jessika. However, this does go to a really hateful and uncomfortable place that I don’t fault others for not wanting to pick this up or continue playing due to it. As for whether or not you should pick this game up and play it, only do it if you’re ready to watch a lot of uncomfortable and hateful clips.

If you’re interested in playing Jessika you may be in luck! Ask JimDeadlock on our Discord server and he may have a free key for you, if you’re quick!