Well, the PC release sure came out timely haha.

Heart’s Medicine – Doctor’s Oath is finally out for PC! Or should say that it was able to be ported over as those that played the series on PC were told that it wasn’t possible last year (I still held out hopes though). If you need a basic, little refresher on what happened at the end of Hospital Heat (spoilers ahead if you haven’t played it): Sophia revealed she was pregnant (although Joe, the father, died in an ambulance crash in Time to Heal); Daniel was fired due to his drug addiction but got a job at Queensburrow with the help of Allison; Allison performs brain surgery on her mother; Little Creak Hospital was burned down due to old equipment forced onto the hospital; and everyone was transfered to Queensburrow.

Now in Doctor’s Oath, the Little Creek team is still getting used to being at Queensburrow. Not only does Queensburrow have a staff that isn’t too inviting, they have multiple systems in place that the Little Creek team finds weird. Though, the worst has to be that Allison is now interning under a different doctor, Dr. Ermey, during her last rotation. Dr. Ermey doesn’t like Allison and is looking for anything to fail her. He even has Aubrey as his star student (bleh). Of course, this isn’t the only thing Allison has to deal with. A new patient, named Grant, comes in with a mysterious disease and, due to a certain star student, infects a handful of doctors. Now Allison and the rest of the uninfected doctors must find a way to save their fellow colleagues before time runs out. I have to warn you guys, the story for this installment gets very sad. 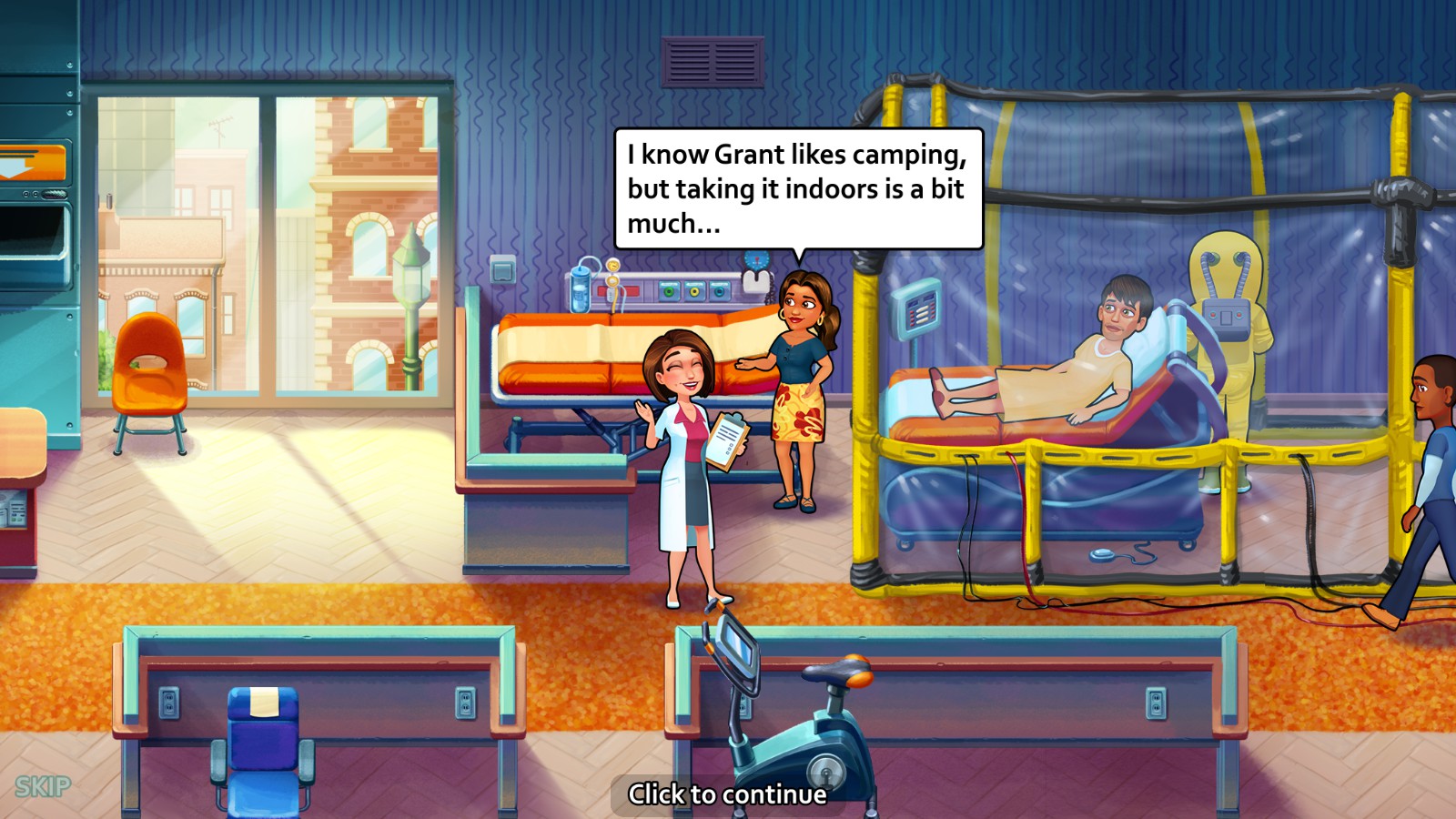 Doctor’s Oath plays similarly to Gamehouse’s previous games. Each level, patients will enter your department to get treated. You need to assign them to the station they need to be at and then set Allison to treat them in a timely manner so you can get a sweet quick bonus or keep them from leaving in anger. Sometimes, it’s just a simple treatment where Allison just needs to do a check, choose the right choice between multiple choices, the patient needs an item (which can be a single item or one you need to combine), or you need to do a minigame (weirdly enough, there are no gesture treatments). Most of the minigames are new and correspond with which department you’re in. Once they’re all done, all you’ll need to do is check them out. In addition, you’ll have the classic optional find Oliver task as well as a challenge. At the end, you’ll be granted hearts and stars based on your score. 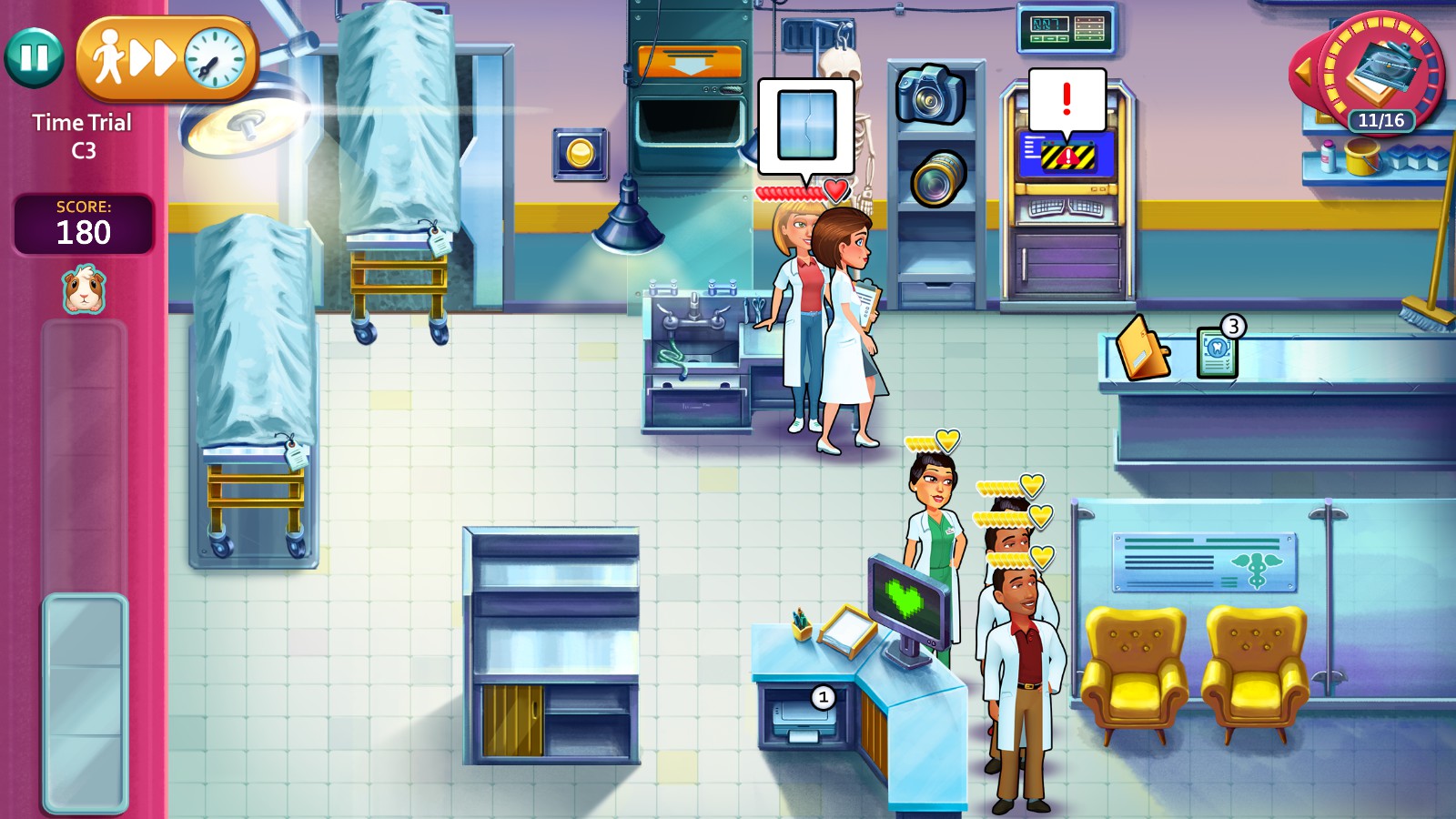 However, there are some significant changes made since Hospital Heat for better or for worse. One addition that I’m not surprised about is the ability to call in patients early. If you complete the level early, as well as having all your stations clean, you’ll get bonus points. However, the main aspect that I hated, and I have seen complaints on for both mobile and PC, is having to do each level multiple times. You can’t get all the stars on your first go if you’re that good anymore. After the first couple of story levels, you’ll be generally getting only one star, maybe two, on your first try. Your score is accumulated with each try and this often requires you to play a level at least three times to get all five stars. This is due to the mobile version introducing an energy system which depleted by 20 every time you played a level.

Though, you do get some help with the addition of boosters. These boosters will boost something specific so you can hopefully get a higher score like being able to walk faster, giving you an additional tray slot, more mini-game/level time, or having Olivers spawn in more. You’ll get boosters every time you level up, from chests, or you can buy more with diamonds. 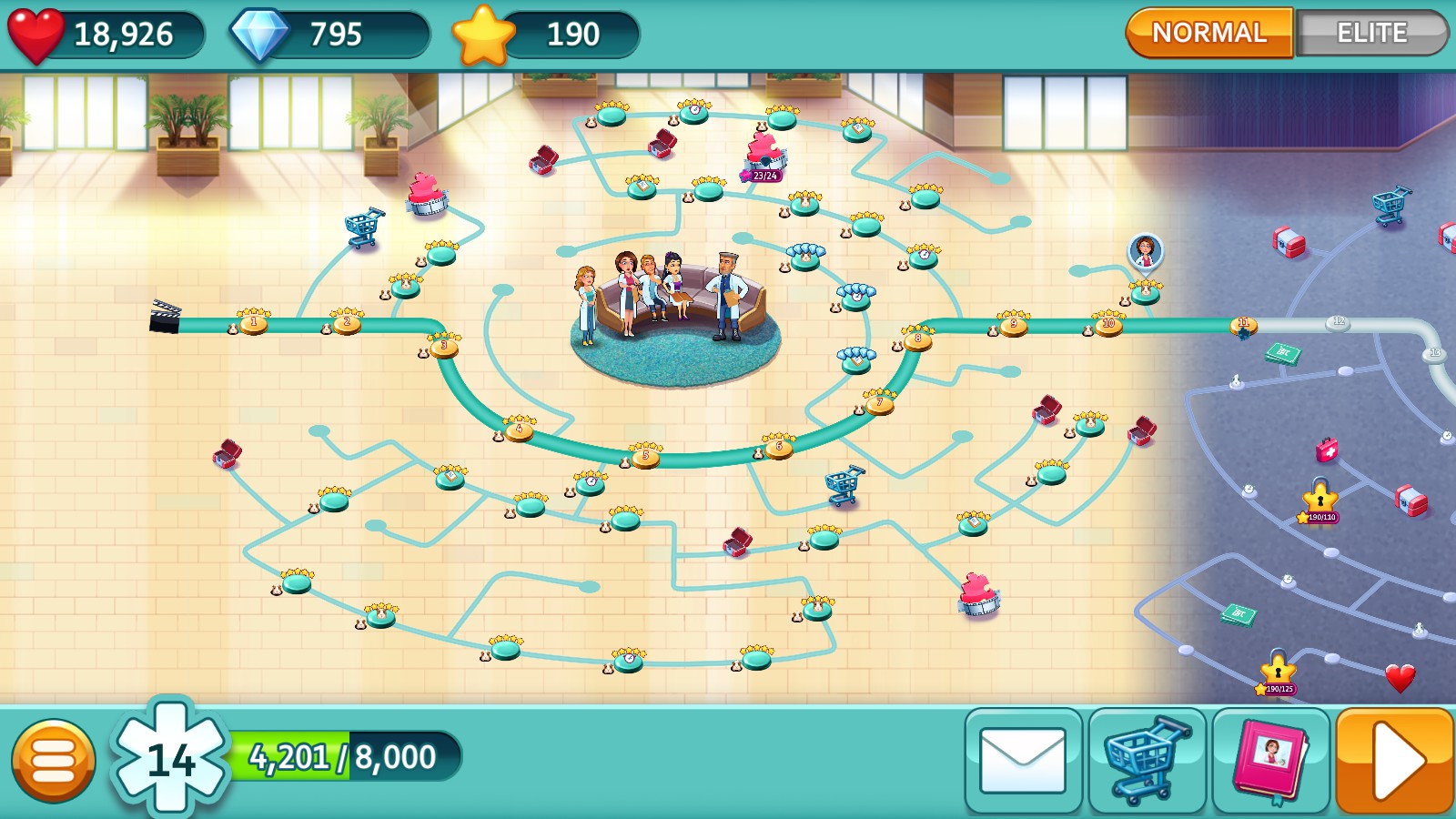 The chapter maps are also very different than before. Instead of the usual curvy line with the occasional challenge level, the map is dominated with a ton of challenge levels. Around the routes, there are chests that you’ll need to complete a task before opening (like finding Oliver 200 times), card stacks, and a spot that will give you more hearts. There are also character puzzles that you’ll need to get puzzle pieces by completing challenges. Once you get all of them and place them, you’ll get a story scene and diamonds. However, the paths are blocked by star gates. These star gates require you to have so many stars to unlock so you can continue with the story or block challenge levels that lead to a chest, card pack, or hearts. Due to this, you’ll need to often go back and grind out levels (if you didn’t play each level multiple times already) to continue. You’ll need a whopping 720 stars to finish the story. I’m not a fan of this either for obvious reasons. This seems like it was due to the energy system as well.

I did do a test to see if this was really a problem or not. I went totally crazy and 100% the first chapter, which took me about six hours for 190 stars. I then played every level afterwords only once, unless I didn’t complete the challenge, and that lasted me until the lock that would open Chapter 5. In Chapter 4, I came across not having enough stars for even the locks blocking challenge levels and had 386 stars out of the needed 450. Additionally, I kept track of how many stars I achieved only in Chapter 2 and it left me 70 stars short from what was required to move on to Chapter 3. 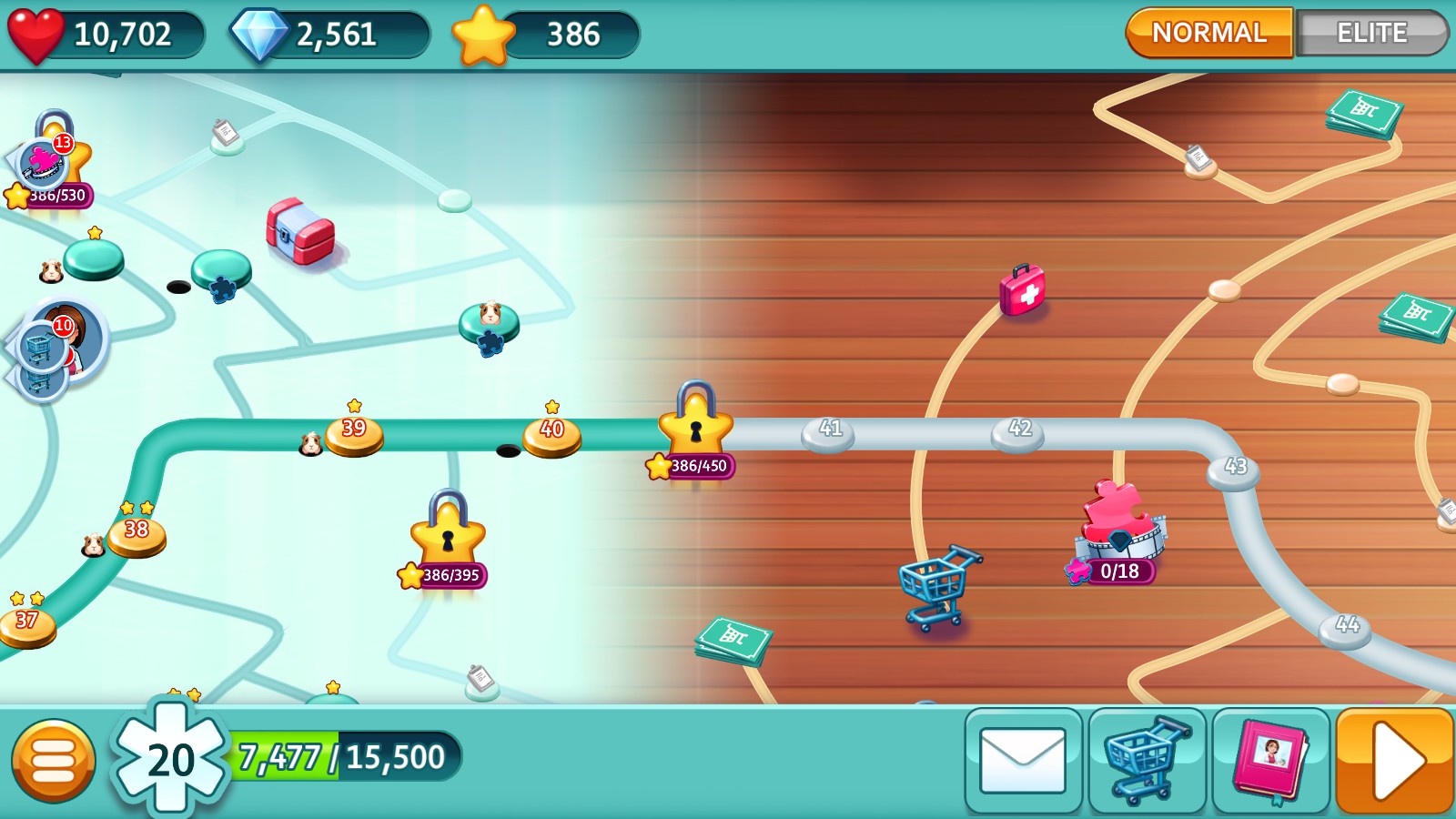 You can unlock the star locks with diamonds instead, but I don’t recommend doing this on the PC version as you don’t buy diamonds with real money. They’re limited as you only get a diamond when you first get it from challenges, from completing the character puzzles, or the handful of challenge levels that just give you diamonds, otherwise you get some once you level up. Not to mention the diamonds are used to unlock extra scenes in the photo album as you need to buy each individual part (which for some photos are quite pricey).

Anyway, the challenge levels, which most of them will be familiar. There are the basic challenge levels; guinea pig levels that has you finding Oliver, Punky (adds more time), and Olive (gives extra hearts); time trials allows you to call an unlimited number of patients and will either have a challenge that goes with it (like getting a certain score in the first half or checking out a ton of patients) or one that can be on the regular challenge (like patients losing hearts very quickly or finding items); and lastly the minigame challenges that will just have you do one or a couple mini-games. 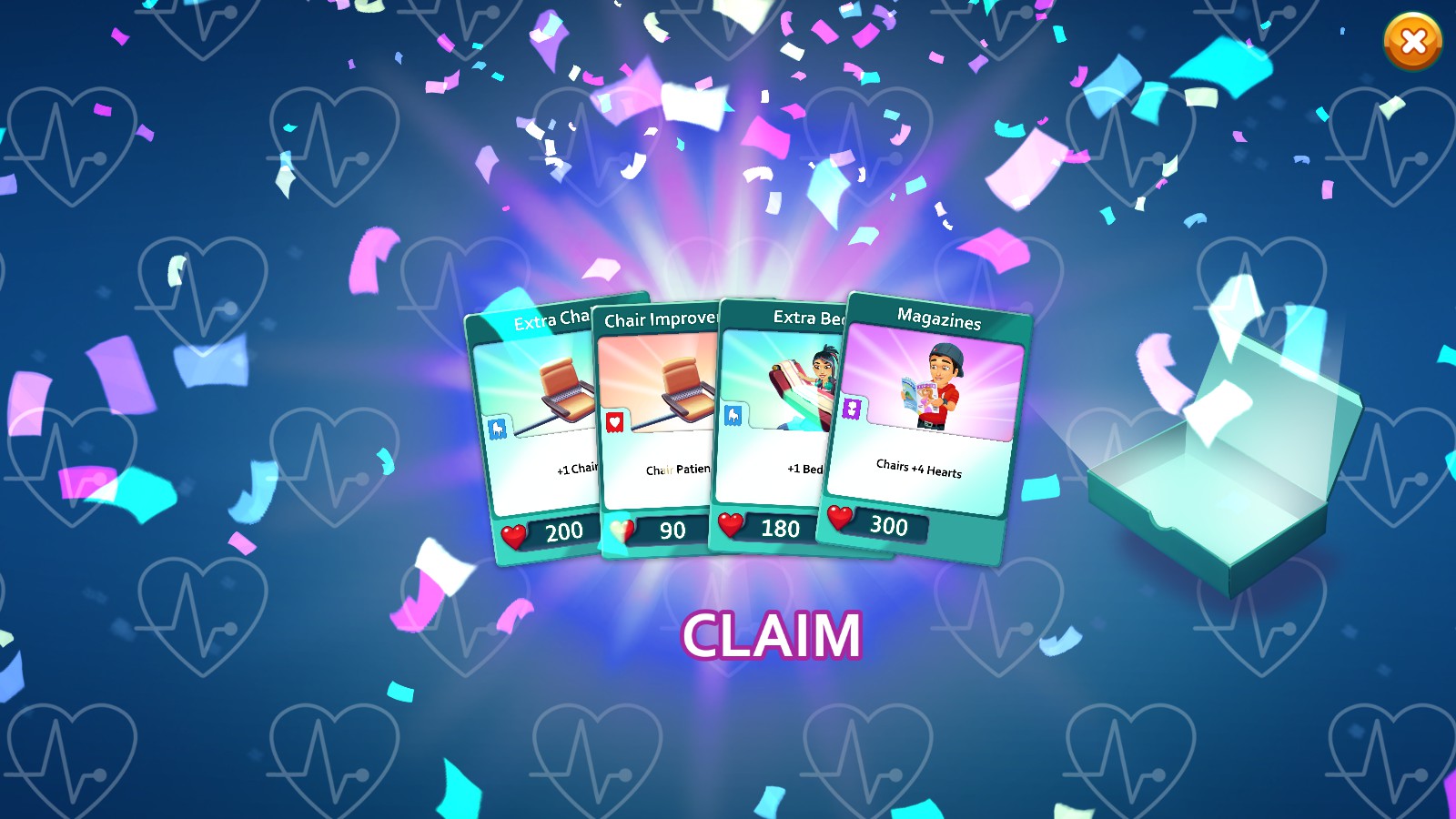 The upgrades have also changed. Instead of upgrades being available from the start as long as you have enough coins, here it’s based on upgrade cards and require hearts for payment. Apart from a couple of cards being granted at the beginning, you need to open chests or card stacks to get more of, and some of them are available in other chapters. This is a little bit weird, but some challenges do put you in a previous department and you might have to go back to grind out stars anyway. These upgrades improve the patient’s patience, add in an additional station, gives you an additional tray slot forever, and how fast they and Allison walk, but there are upgrades that improve how many hearts an item/station will give you. Depending on the level and if the challenge requires you to get to a certain point threshold, those heart upgrades can be required to at least get one star your first try without a booster (otherwise, it’ll take two tries) or complete the challenge. Two other upgrade shops were added in though: the mini-game upgrades that’ll give you two extra seconds or double the points for one minigame and the Oliver upgrades that will increase the amount of points and the spawn rates of the special guinea pigs named Punky and Olive. These upgrades get pretty expensive fast which quickly makes the mini-game upgrades useless and the Oliver upgrades only worth it for the Oliver challenges that you can’t complete even with boosters (which might be due to the mobile version letting you double your score by watching ads).

Once you complete the whole game, you’ll unlock Elite Mode. This will start you at the very beginning, but adds in 12 new levels, two new patients, a new guinea pig, 12 new shop items, two new stories, and is slightly harder than Normal Mode. Honestly, I wasn’t really up to restarting by the end of my playthrough, but it’s there if you want to play even more. 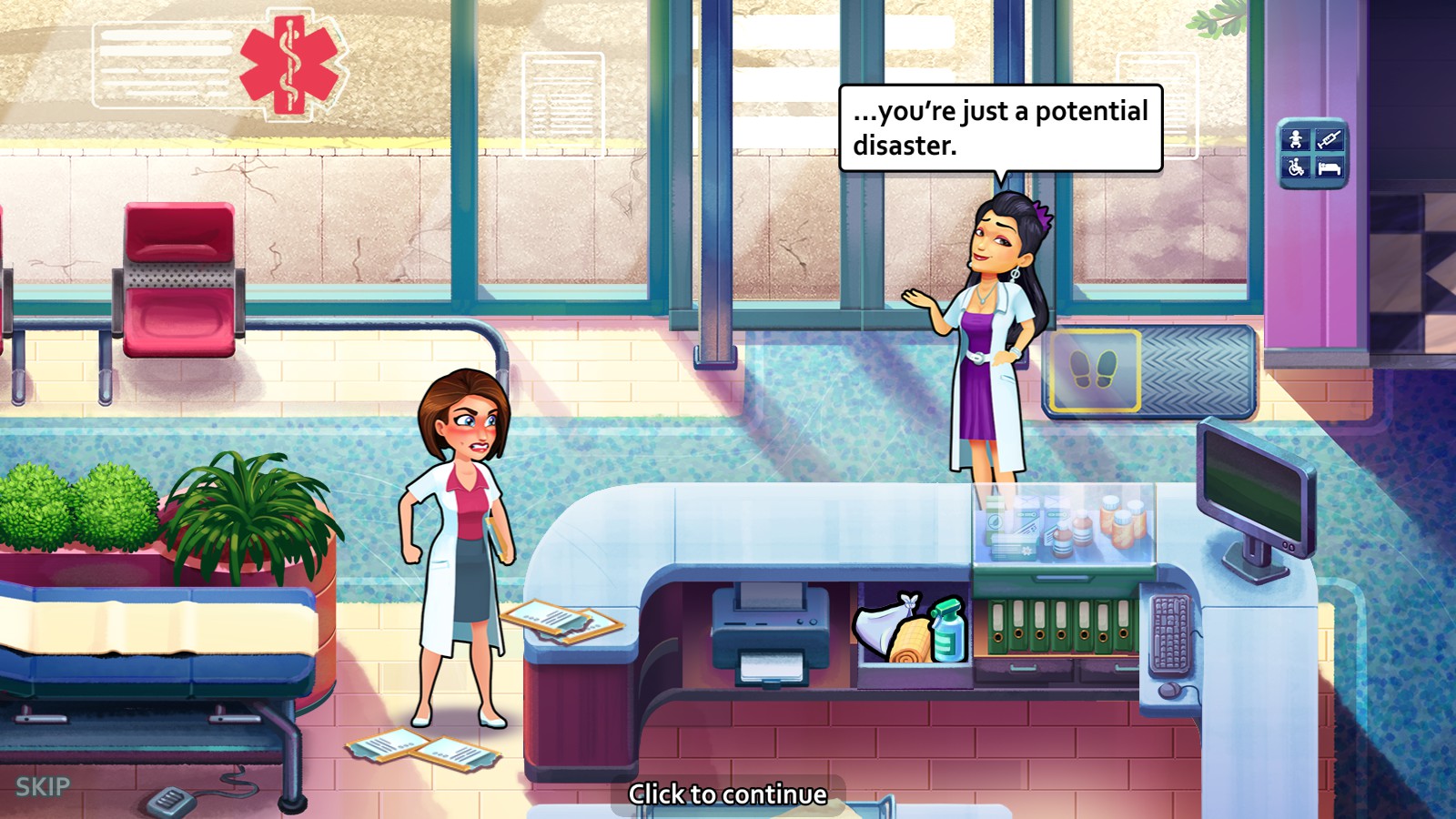 Heart’s Medicine – Doctor’s Oath keeps up with the wonderful story that hooked me since the first time I started the series and it has to be the saddest Gamehouse game yet, but it’s bogged down by how Gamehouse decided to monetize this title. Yes, there are no in-game purchases as the price is a one time deal, however it still affects this port. You need to play the vast majority of levels multiple times; the star locks, while encouraging players to play the challenge levels, will make you go back to grind out stars; the upgrades are expensive; and it’s very easy to get burnt out (I know I did).

When I was looking into how the mobile version is like and how it influenced the PC version, I found out that while Doctor’s Oath may be the last Heart’s Medicine title, it’s not the end. The PC version ends on Chapter 6, but the mobile version has two additional chapters with a third in the works. From the looks of the synopsis, it takes place after Allison’s graduation and follows plot points that weren’t fully resolved in the first six chapters (like which department Allison decides on and if Aubrey will actually face consequences). Hopefully, once chapters are done being added in, they’ll be ported over to PC.

I don’t regret playing Doctor’s Oath as I do love Allison’s story, but I’d be lying if I didn’t say that I regretted the multiple nights I stayed up just to grind out stars so I can continue through the story. So, if you’ve been looking forward to the next (and possibly last?) chapter to Allison’s story ever since Time to Heal was released and don’t mind how you need to replay levels and grind out stars, pick this up. I played just enough to where I can complete the game and it took me a little bit over 36 hours to complete, so you’ll be getting the most bang out of your buck even when doing the minimum (and even more if you want to 100% Normal and Elite mode). Otherwise… I don’t blame you for skipping this one.