Still hunting for improvements and an identity.

As a VERY casual hunting game player (barely played any in this very niche genre), I found it would be a nice idea to try one of the upcoming titles – Hunting Simulator 2. It’s worth noting I have not played the previous title of the franchise and given what this game provides… I don’t think I will go back and try that, or even continue playing this one unless a fair amount of updates and improvements are done to the current state. 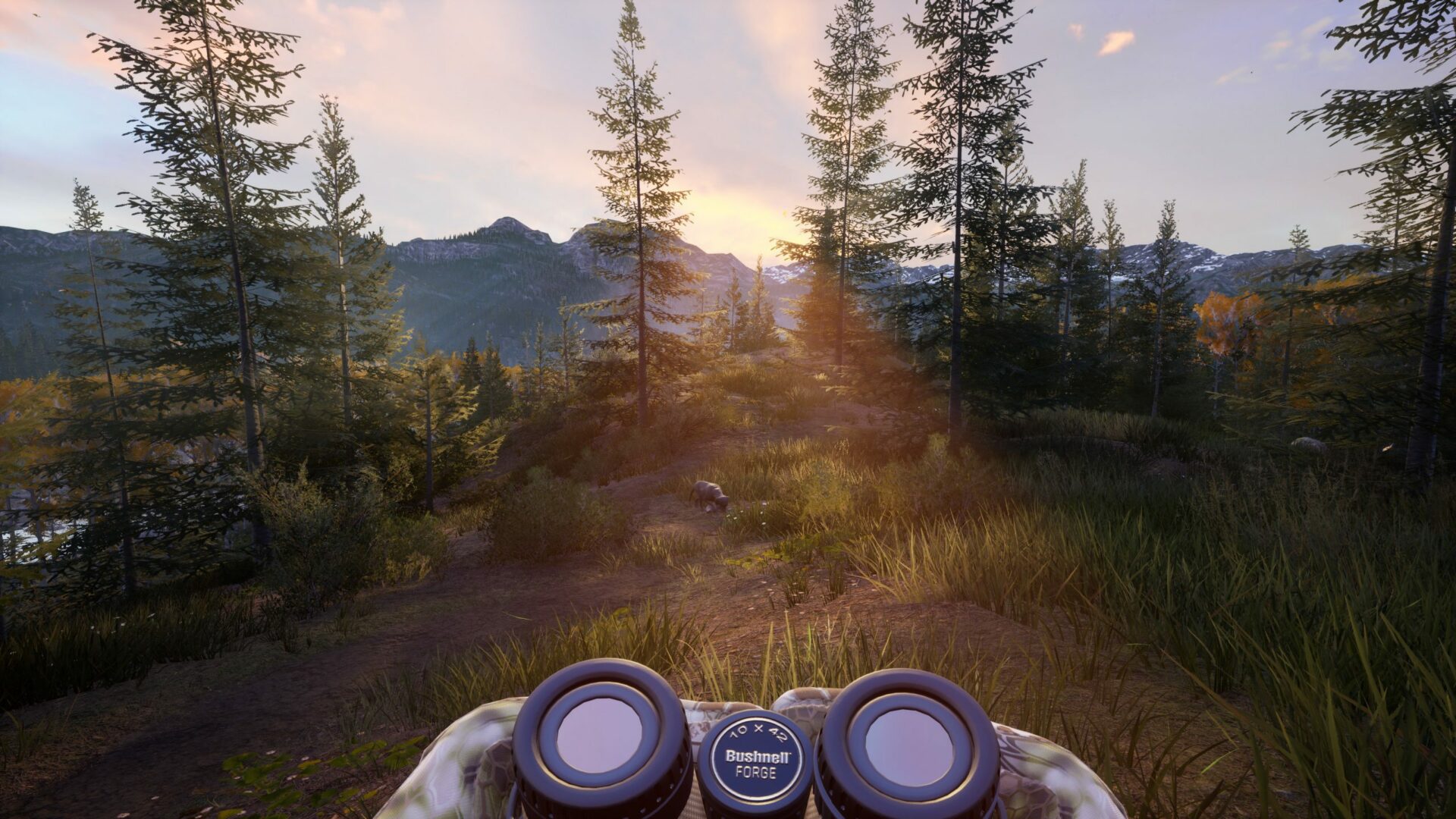 After a rather well done tutorial (that also showcases some of the game’s issues I’ll mention later on), you’re placed in a beautiful Lodge – which is yours!

While the lodge is really pretty and works as a hub for the player, it is also a disappointing feature as it already feels like a top-tier house you’d buy at the endgame stage when you had plenty of money. I expected to start with a small wood cabin like the one in the tutorial and gradually grow my house and customize what I could put into it besides just adding the trophies of the animals you hunted. Felt like massive missed potential right from the get-go.

Once you buy a few licenses to be allowed to hunt the animals you bought licenses for, you can then pick the region where those animals can be found – comprised of 3 large open world maps, you can then not only focus on your core mission of capturing the animal you bought the license for, but also explore those areas and find places of interest – which also serve as fast travel points to better plan your route. Another missed opportunity was to allow the player to set up a small camp (tent and campfire) as a temporary checkpoint/fast travel spot – also adding some immersion to the gameplay. 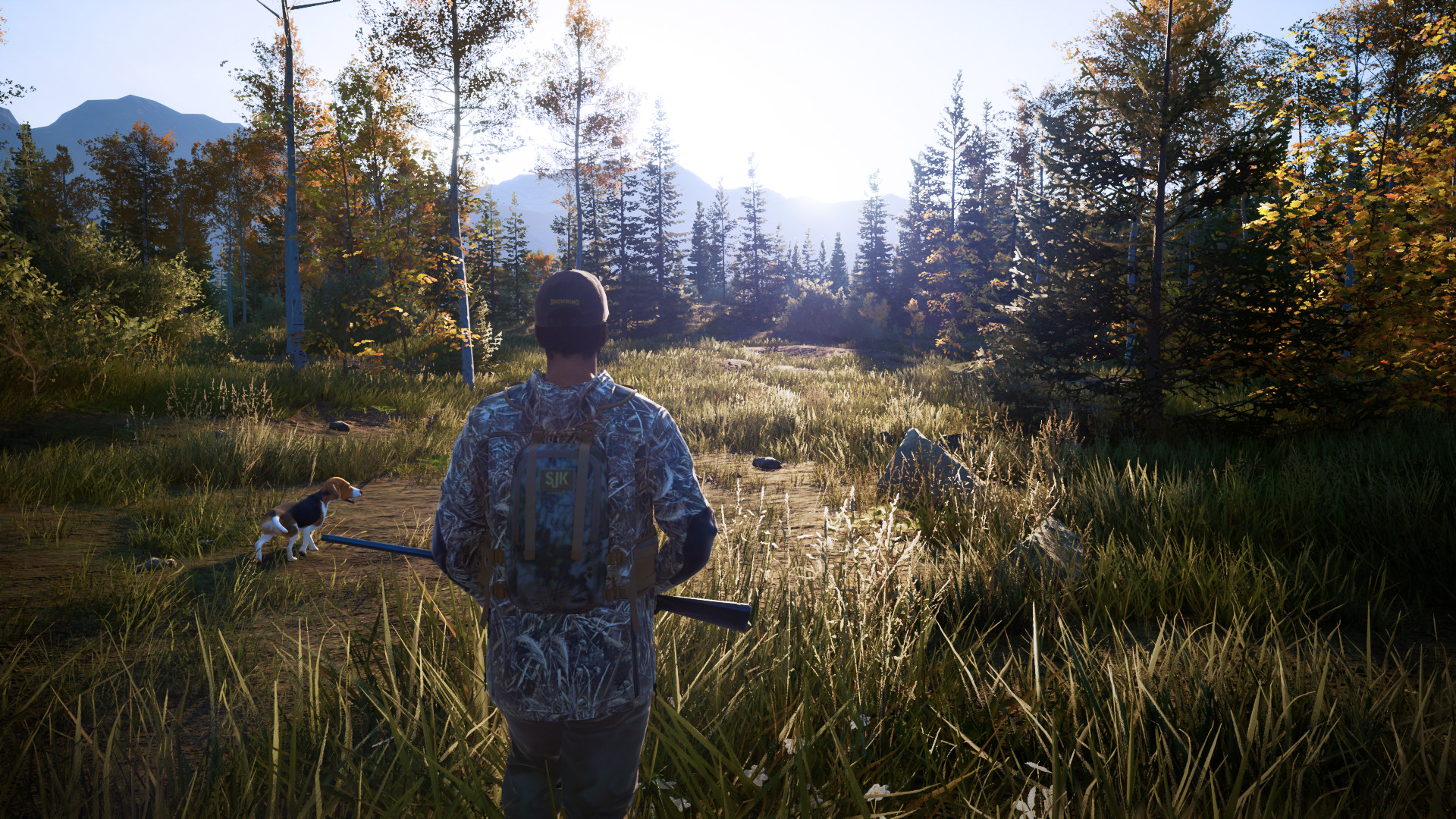 Immersion is a core in a hunting game, in my opinion – Hunting Simulator 2 fails at that from a gameplay and technical standpoint. Not only is the animal AI rather responsive… sometimes they will do really stupid nonsensical actions that left me scratching my head: getting shot and running in my direction was an example.
Another immersion breaking system is, ironically, the fine system. You can be fined by doing “illegal” actions such as shooting too much at the same animal and thus not killing it fast enough, hunting animals you don’t have licenses for or simply using the wrong weapon caliber on animals (each animal has a list of acceptable projectile calibers they can be shot with).

This sounds fine and dandy until you notice how poorly thought out it is – if a wrong caliber is used for example (or an animal you don’t have license for is killed) you simply cannot bag that animal. It is left for dead in the nature…

Nobody saw me shoot it or doing anything wrong, why can’t I bag it and keep it for myself at least?

I get I should be blocked from selling it for money as I didn’t respect the rules and the fine makes sense, but simply not being allowed to pick up the animal and keeping it as a trophy or… hell… selling on a black market or using materials for cosmetics is just… not immersive or realistic. I’m not picking up the animal because the game TELLS me I can’t pick it up… not because of my choice in this hunting simulator. It makes no sense, in my opinion. You can’t even jump!

Another factor I’m not fond of is the arcade nature of the gunplay – rifles seem to have zero bullet drop or speed (thus, hitscan), wind seems to not be a factor and while sounds and the weapon recoil is well done, the gunplay feels too simple and basic for what a hunting simulator should be. The tutorial doesn’t explain the shooting, you literally just “shoot that deer” and that’s it, so from my experience and lack of guides on the gunplay, I am fairly convinced the game lacks any proper bullet mechanics.

A praise-worthy fact is that you can switch between first and third person camera at the press of a button – default V. A problem bound to this is that the detail on the character isn’t great… at all. You can holster weapons and in third person… the rifle just disappears. There is a lack of detail and attention to the UI and the gameplay in general. Your movements have an odd audio intensity and doesn’t allow you to accurately determine how stealthy you’re being – and this MATTERS in a hunting game. 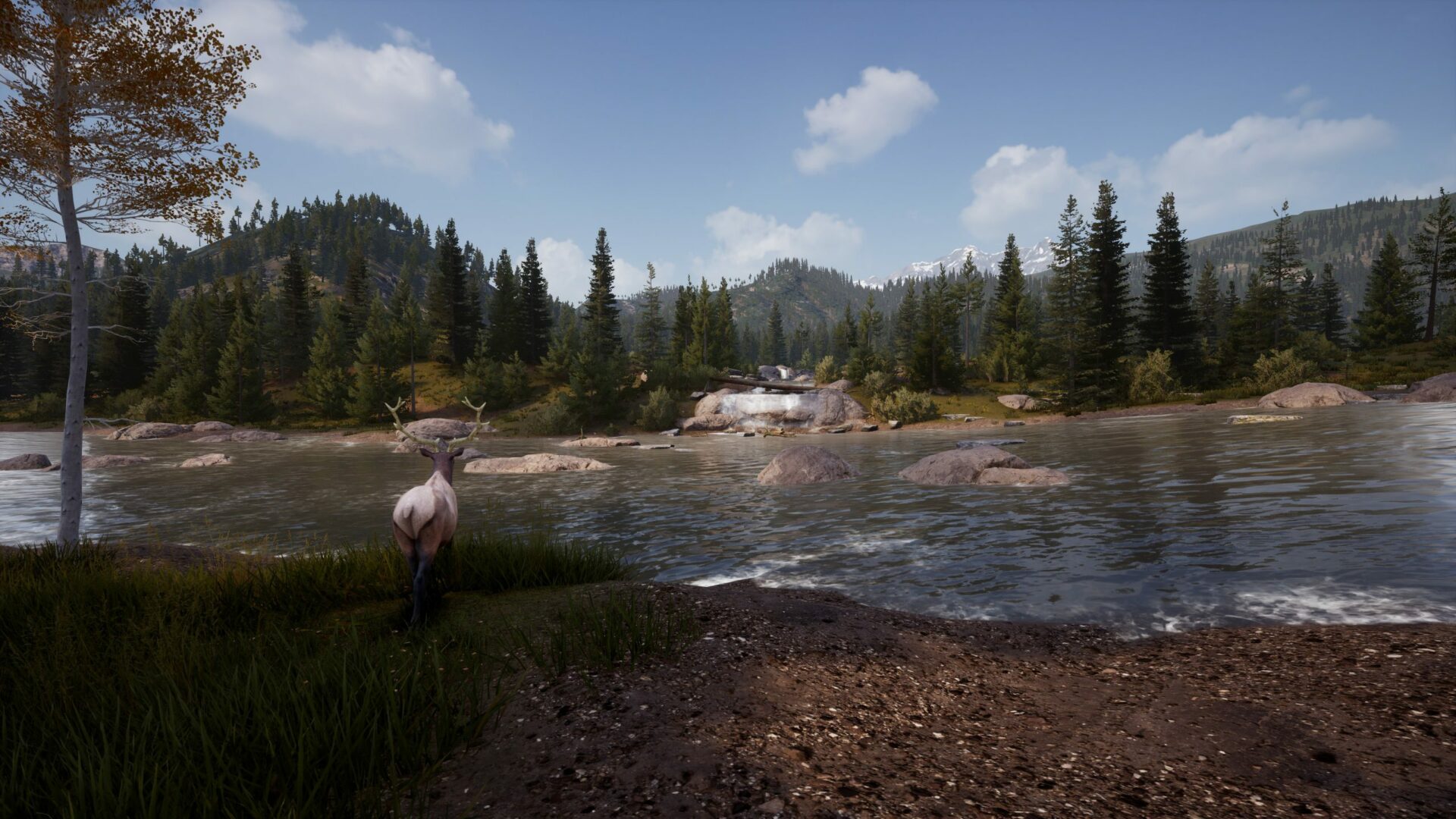 Another addition I really love is the dog companion – much like Blair Witch, a dog AI will follow you around and do actions (which you can reward, encouraging the dog and improving its skills) and is really, really well done in my opinion. The dog will follow tracks you command him to, stay or come with you (to control how he can affect your stealth) or even pick up animals you shot and bring them to you.

Overall, the game has too many issues that make it a weak entry to the genre, the mix of simulation (like the name would imply) and arcade mechanics is jarring and don’t work together – the game feels like it doesn’t know what it wants to be and the lasting impression is of a potentially fun game that is ruined by inconsistent immersion breaking bugs (like the audio), AI issues and severely lacking design decisions (the fine system, for example).

While the graphics themselves are serviceable, the animations in general are much less so. From the non-existent holstering animation for the rifle in third person, to foliage (in particular trees) not reacting to you passing through them (both in a visual and audio aspect) and even climbing a tower for a better viewpoint entirely SKIPS the ladder climbing animation – it’s very, very disappointing.
Even the UI has very odd key prompts – you open the map logically with M and to add a waypoint, you use Enter and exit the map with Backspace.

Anyway, the amount of options to customize the game are plentiful enough, including a much appreciated FOV slider. The optimization also seems to be solid, running at constant 60FPS for me, though the game world is quite empty overall so I’d be surprised of the opposite than what the performance is right now. I recommend the game if you have the recommended specs because I tried the low preset and the game looks like a cheap Unity asset rip-off game, totally breaking the entire point of the immersion and the fun of hunting of the game, so avoid the game if you can only run it on the minimum settings! 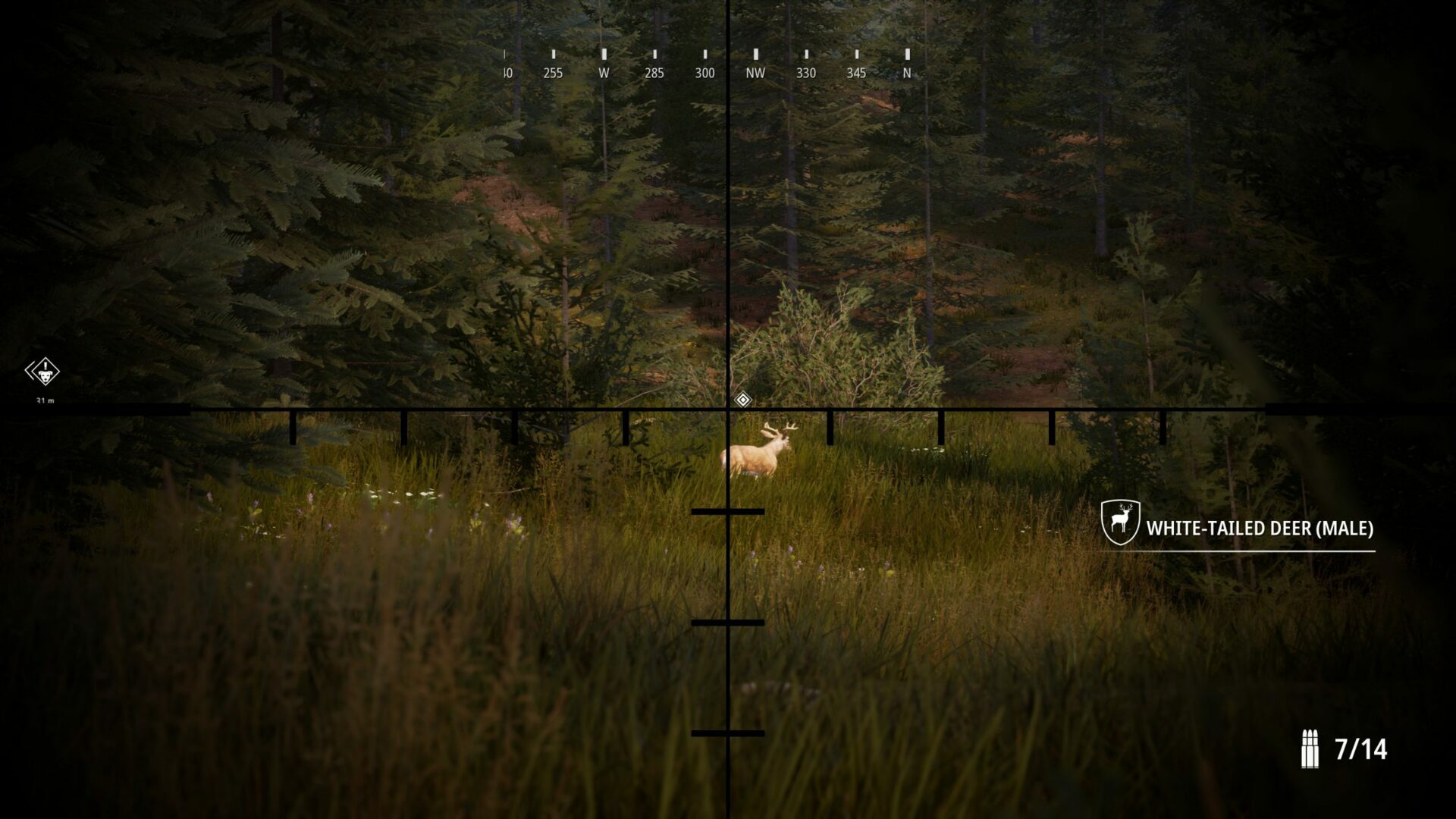 Another issue worth noting is that there is a very odd texture pop-in at a distance, even with view distance maxed. Despite some weird looking textures far away, the rest of the game does look good overall, water in particular looks really good.

Lacking any music, really, the game must excel at the sound design in-game to ensure the immersion of solo hunting in this big open world.

And it does so, sort of.

Firstly, footstep sounds are very inconsistent to accurately determine how effective is your stealthing skills. Your dog doesn’t bark or do anything to warn you when it finds something – the game just pops you a message, breaking immersion further. Animal sounds are done well from the ones I saw (there are about 33 animals) and even the callers are well done, though gun sounds are lackluster – shooting high calibers for the later animals should feel impactful and instead I feel like I’m playing Fallout 3 all over again – the BB Gun there honestly feels as good as a hunting rifle in this game which is very disappointing too considering the firepower they theoretically pack.

Hunting Simulator 2 is very, very disappointing and flawed; the flaws are easily fixable with a few patches though as most issues are tied with missing/weak animations, audio bugs and visual feedback and UI improvements. The lack of co-op the original had is also a very odd ommision that further takes away value from the game, to the point where I find it hard to recommend to anyone for over 10€ and even then – there are better hunting games on the market you can grab on sale for even cheaper than that. A fantastic dog companion system couldn’t save this game from its current state but I recommend fans of the genre keep an eye on it, it may turn out to be something really good after a few updates!