Originally called Once Upon a Coma, Neversong follows a young boy named Peet. Told in rhyme, we’re told that Peet’s world was devoid of life and color until he meet a girlnamed Wren. While she may have been the prettiest in town, they went on adventures and she even taught Peet how to play a piano and how to read sheet music. However, on one of their adventures they made a wrong move. Upon entering an abandoned asylum, Wren was kidnapped by a big shadowy man with a creepy smile (who is amply named Doctor Smile). The shock of this all, in combination of feeling too weak, was too much for Peet and resulted in him falling into a coma. 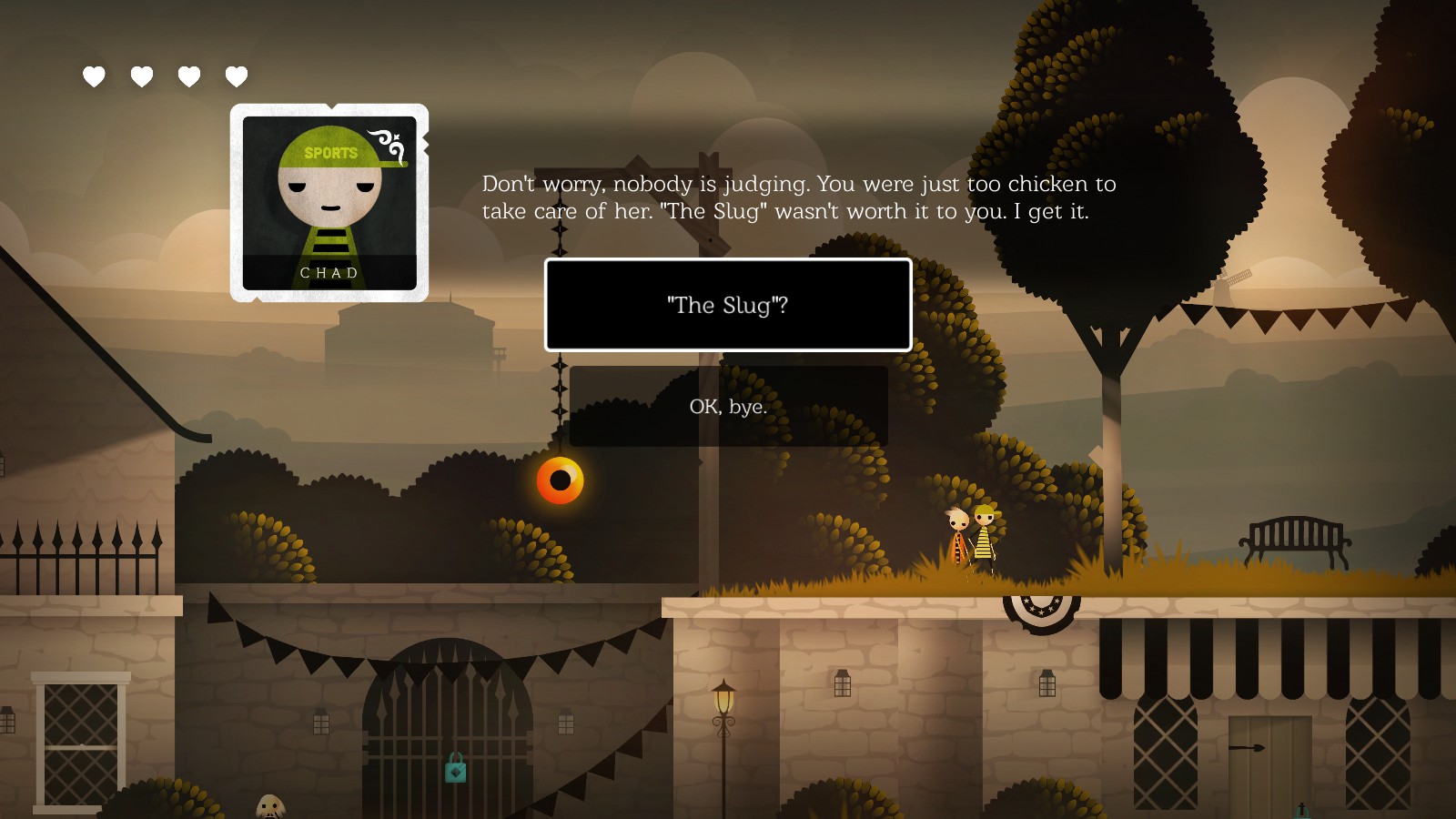 We come in right as Peet wakes up right on top of the piano both him and Wren played together. Venturing out of the house, you realize that all the adults in your village (Red Wind Village) have gone missing. Though, you can still talk to the other kids that live in the village. Each one of them are pretty weird, but entertaining to talk to, like Jon who’s obsessed with jumping a billion times, a kid who loves parkour, or Simeon who is terrible to Peet but inflates. Not only that, but these kids do give valuable information concerning what’s going on and occasionally have puzzles that involve them. Anyway, not long after waking up, you’ll gain access to a bad and after venturing outside Red Wind Village you’ll be joined by Bird. 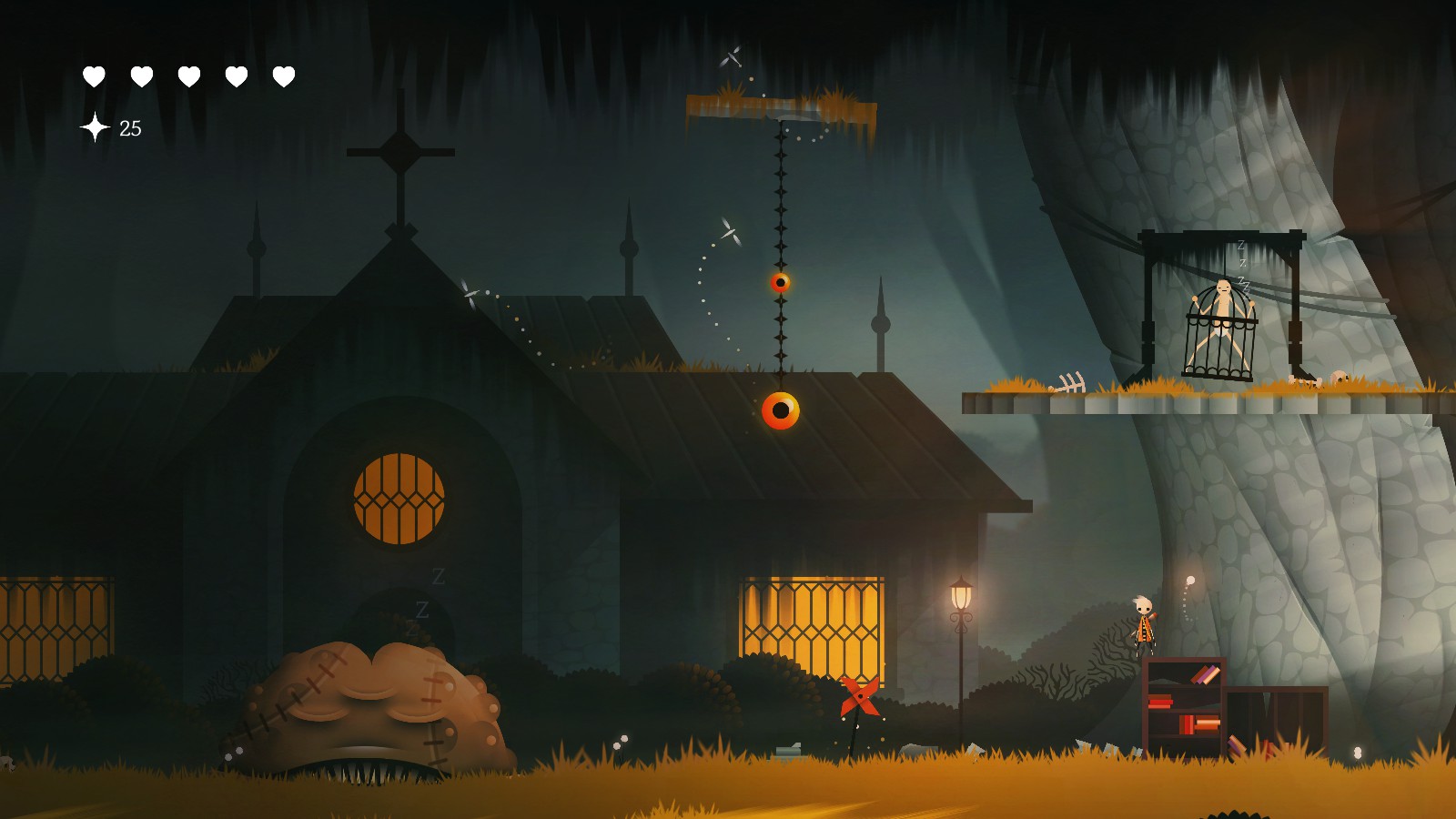 Thus, you set out to find and rescue Wren. Of course, Dr. Smile is going to be right there, seemingly one step ahead just to tease you and creep you out in Neversong’s storybook poem cutscenes. Every location you’ll be visiting is just down the road from Red Wind Village, with the only thing that’s stopping you from going there early is not having the required item. Each area are designed well in my opinion, as it gently nudges you to where you need to go with the main block being if you need an item or solve a puzzle before you can continue. The puzzle here are fairly easy. Most of the time it just requires you to use one of your items and show that you know how to use them or just paying attention to what a character said. I suspect the only difficulty people will run into are the two puzzles where you’re pressed on time for rolling bombs into the right place and one of the end game puzzles which is really just trial and error. Platforming wise, it’s mostly easy as well, though there was one platforming section where I just couldn’t jump on the fourth platform for the life of me.

While you’re exploring each location, you can also find coma cards. These cards give you a short description of who’s on it and, depending on the card, will let you equip it for an accessory. Like you can give Bird a rainbow trail or have Peet wear a headband. 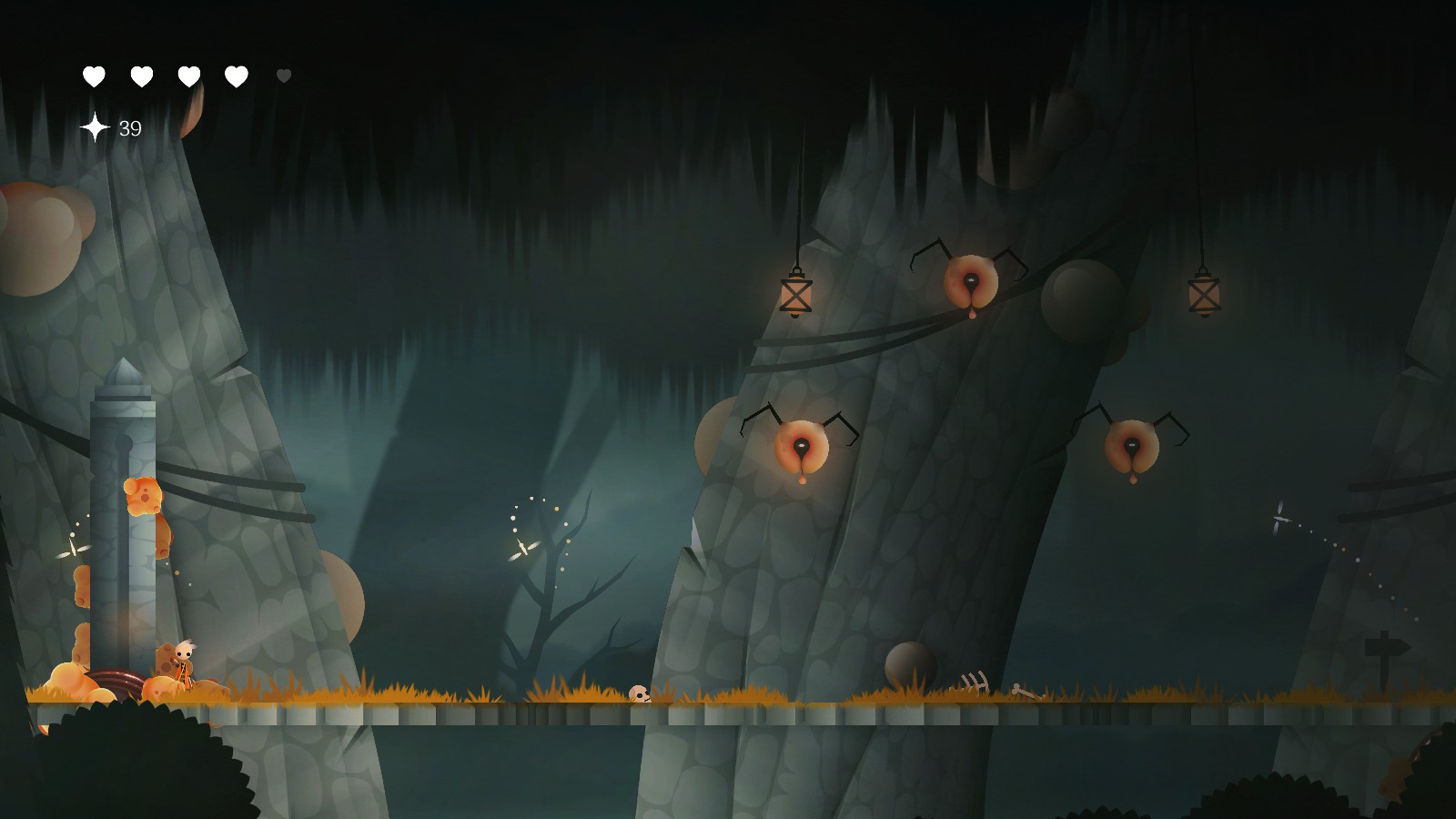 There are also enemies hanging around ready to take your health away. The only way to defend yourself is to either run away (though, that won’t be an option in cases where you’re blocked in until every enemy is killed) or use your trusty bat. If Peet touches anything that can hurt him, including things like spikes, he’ll lose a point of health. Each time you defeat an enemy, which can take one hit to seven depending on the enemy type, it’ll drop some sparkles. Every 100 sparkles, which are also scattered around each location as well, will give you another heart so you can last longer. In addition, enemies will drop hearts, assuming you don’t have full health, so you can gain your health back. Though if you do die, it isn’t all that punishing. While it seems like it sends you back to your last save, it really doesn’t. You keep your sparkle count and you spawn in with full health, with the only thing that resets are puzzles, enemies, and boss fights. 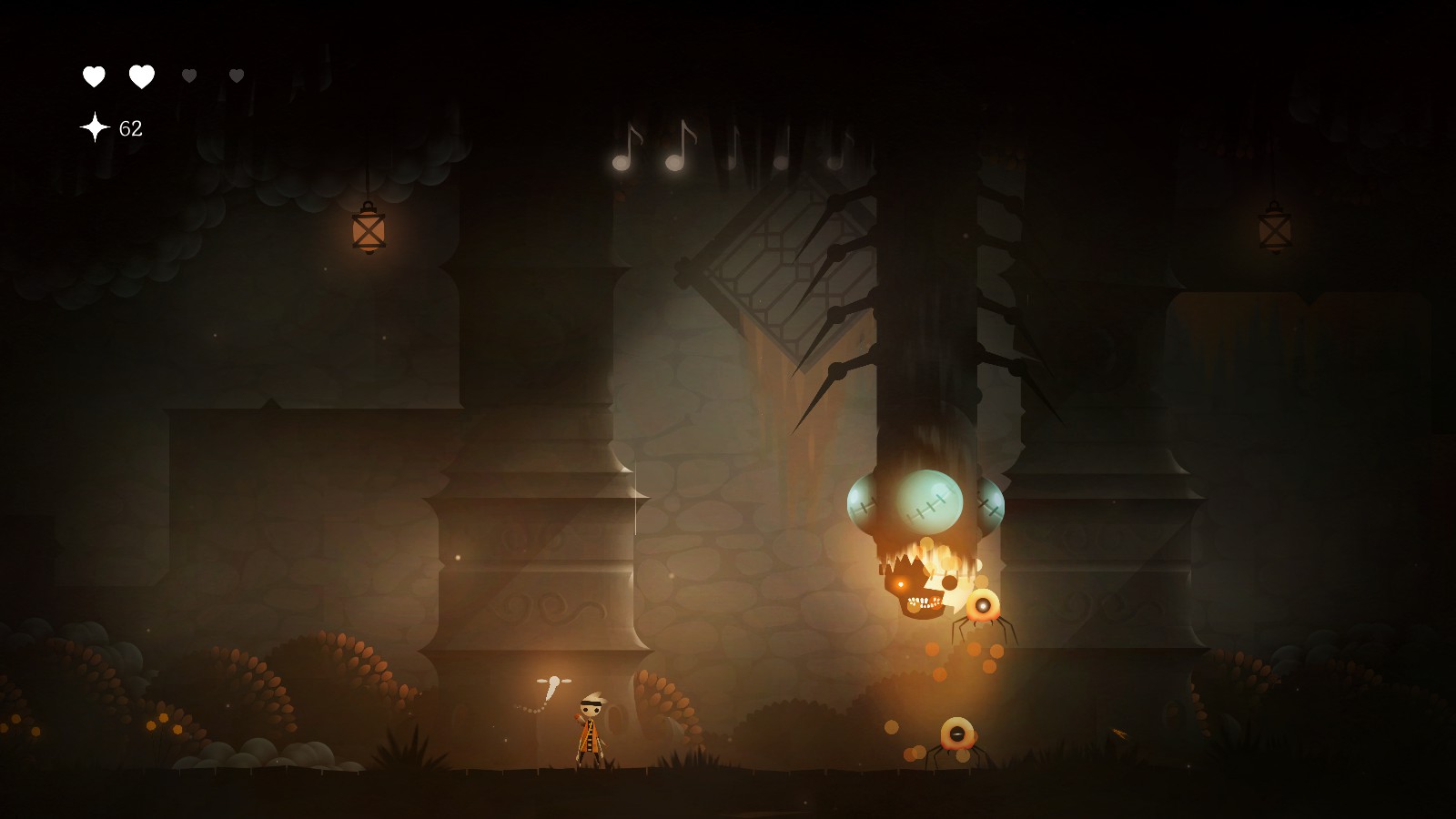 Talking about bosses, their difficulty are going to depend from player to player as it could be easy for some while also being just right for others. Unlike normal enemies, bosses have weak points that needs to be vulnerable so you can damage them and they each have attack patterns. Once you hit them enough, they’ll belt out a song note, give you a heart, and move onto their next phase which will change their appearance and change up their attacks (whether that be adding in an attack or seeming more desperate in their attempts of staying alive). Once you defeat them, you’ll gain their song, which you can play to get an item you need to progress. You’ll get grip gloves so you can swing on magnetic eggs, a skateboard, and an umbrella.

How easy these fights will be depends on if you know their attack pattern, react well to their new attacks, or just have enough health so you can take a hit while you learn. The third boss for me was the main example. I had difficulty with dodging one of her attacks (as well as immediately getting hit with her new phase attack), but on my second try I managed to defeat her so quickly she wasn’t able to do that attack since I knew when to attack. Personally, it was just right for me and while people have complained that you get way too much health, I was surely thankful. 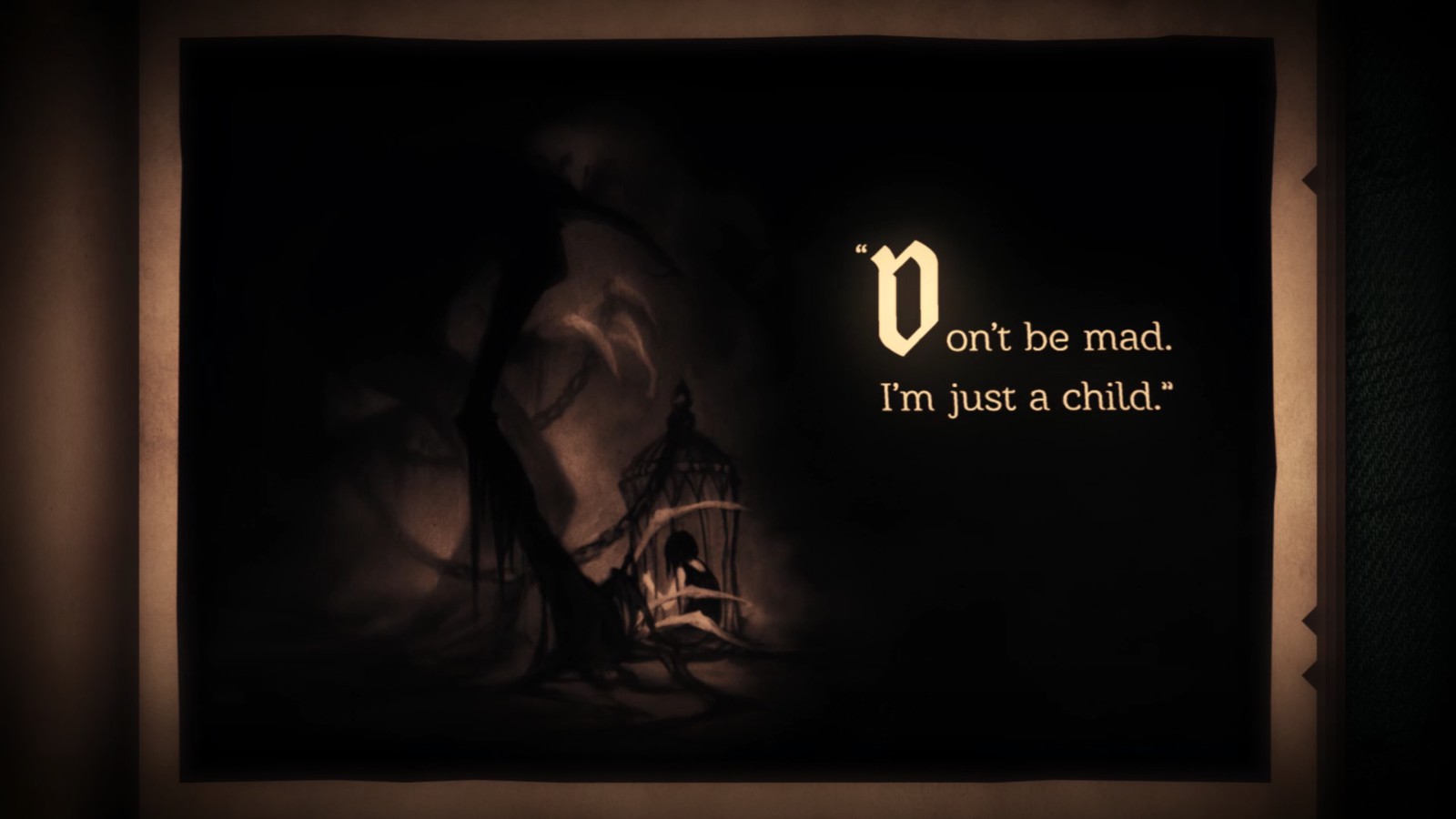 I have to say that the soundtrack and voice acting was great. The music really sets the atmosphere, especially during boss fights where they ramp it up. The voice acting in it’s own right enhances the characters they belong to. While there was one kid where their voice seemed to be lower than the others, these characters wouldn’t have been so entertaining or appealing without the voice acting giving them more personality. And that’s not even mentioning Dr. Smiles’ voice acting which was downright creepy. I dreaded hearing his voice again whenever I spotted him up ahead because it creeped me out so much I wanted to slowly back away and get out of there.

Even though Neversong is going to be an easy game for some people, it’s still a nice adventure platformer that nails it’s creepy atmosphere every step of the way. Although while I didn’t mind how easy the game was (or will be for others), I did have some annoyances with swinging on the magnetic eggs in certain areas (I may have spent too long trying to swing over a big gap and falling down a notch without just falling off the rope altogether is a pain), the rhyming cutscenes were okay, and the ending was a bit confusing. Nonetheless, I had fun playing Neversong and there are genuine moments where it’s going to surprise you. I’d say pick this up if you want to experience a story about loss wrapped in a creepy atmosphere and you don’t mind that it’s probably going to be easy for you.