In the real world, things are tense right now. It’s an introspective time for many, and some folks have more free time on their hands than they’ve had in ages. For me, these extra moments to think are a blessing. There’s more time for chores, for talking to friends and family, and to really pause and let things sink in.
There’s also been a lot of extra time for video games. Especially the narratively impactful sort you really need to sink your teeth into. The kind of game you need time to digest. Now, normally I’m not a platformer sort of gal. It’s not that I dislike them, but vision problems and a tendency to press buttons early often prove my downfall. It’s why puzzle platforms that offer extra accessibility are nice. I know there are more people out there that struggle with the same things I do to a greater degree, and developers willing to accommodate are always welcome.
That being said, Evan’s Remains is a game for people that only want story, people that only want puzzles, and people that just want to see some gorgeous visuals. 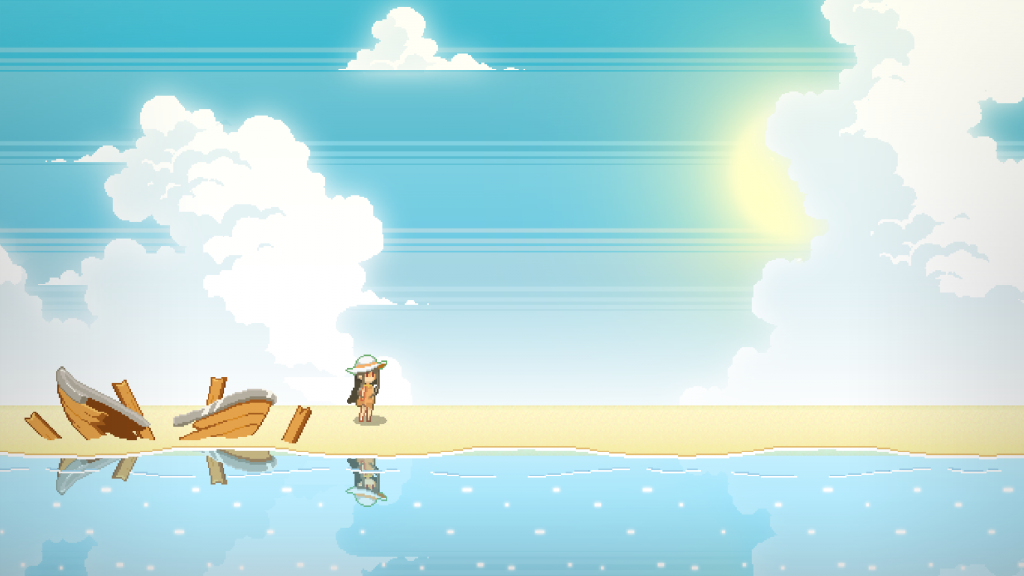 Talking around the story for Evan’s Remains is tricky. As a narrative focused game, I’d rather not spoil the ending, or some of the more important story beats. The first forty-five minutes or so act as set-up. You play as Dysis, a girl on an isolated island looking for a man named Evan. It seems Evan called for Dysis in particular, and it’s a company called Up-Bring that assists in guiding her to him. A companion also accompanies you through a holographic screen. His name is Nikola, and he works to provide additional context and information.

Of course, this is all only at first. It quickly becomes clear that there is more to the entire situation than anyone is letting Dysis know. In fact, perhaps none of what she was told was ever true at all. That’s our job to figure out, and to run through a series of puzzles to decipher. What’s truly going on? Is anyone being honest? Does Dysis remember anything prior to being on this island? Does anyone really know Evan?

It really only takes about an hour before all of the answers start to set themselves up. Again, I can’t spoil them here, but the pacing is handled decently enough. There are a few aspects of character development that get delivered a bit clunkily through dialogue, but it didn’t trouble me too much. Additionally, a few of the later plot points can be a bit difficult to follow, but most of the characters do their best to describe things as concisely as possible. 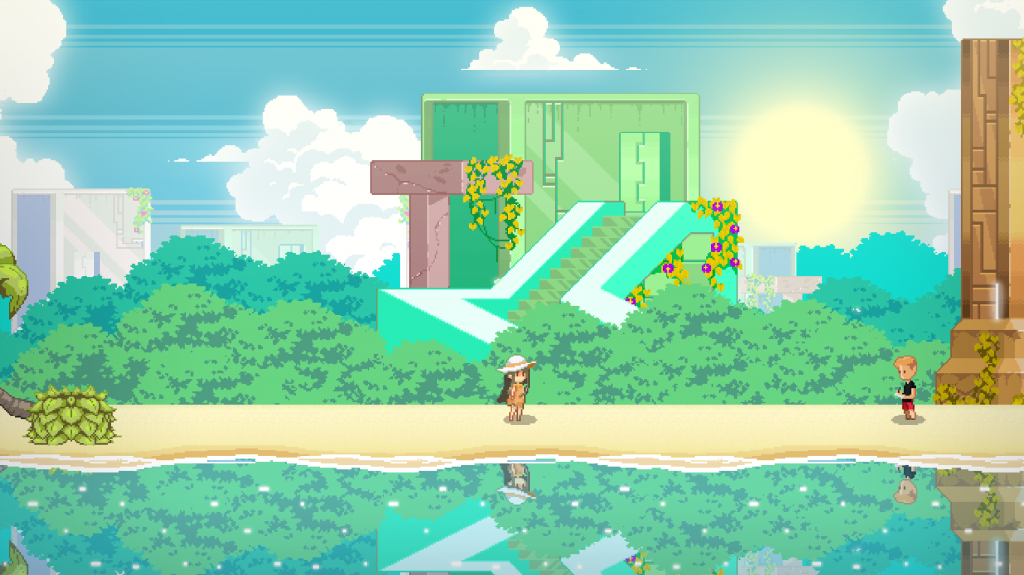 The pixellated art style of Evan’s Remains is beautiful. The animation is rather small in places- specifically sprites- but is still fluid and wonderful. Dialogue is accompanied by talking heads, and each character receives a variety of different states and emotions that change depending on the message they’re delivering. The game is gorgeous, with multiple scenes and landscapes as you progress through the plot and puzzles. 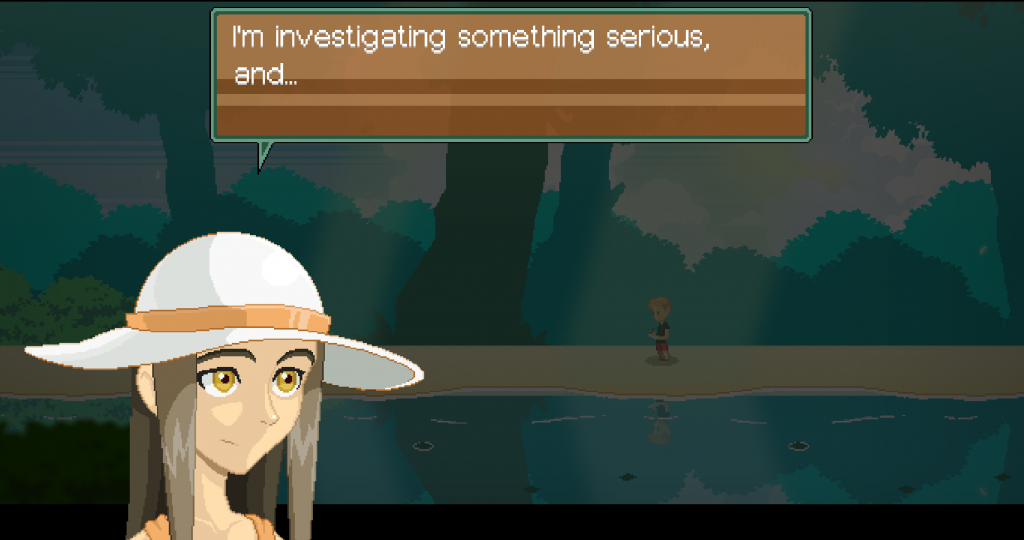 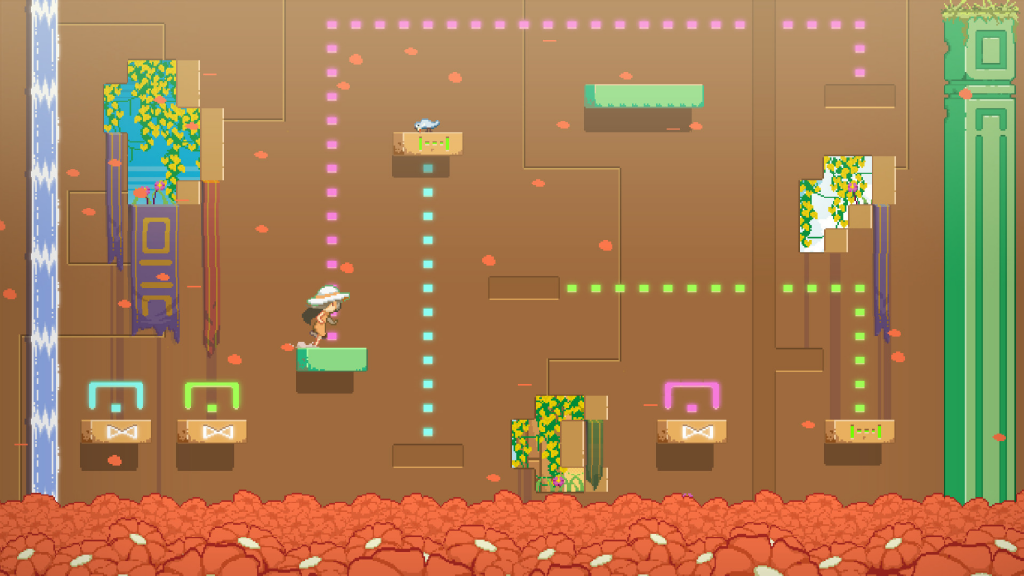 The primary method of interacting with the world in Evan’s Remains is via puzzles. There is no combat in the game. Instead, your character moves left and right in a side-scrolling format, and can jump onto different platforms available above her. In-game, the platforms are a part of cryptic ancient puzzles, and you must solve them in order to progress.

No block is too tremendously complex. When you jump on a regular brown block, it will disappear when you jump off of it again. There are blocks that swap active and deactive blocks, ones that teleport you, some are green and stationary no matter how much you jump, blocks get introduced that help you jump higher, and some can convert between many different types.

Still, if puzzles aren’t really your cup of tea and you came only for the emotional narrative, there’s also an option to skip puzzles entirely. You can do this immediately upon stepping into the puzzle area, or if you get stumped mid-way through. It’s as easy as pressing escape– or pause– and selecting to ‘skip puzzle’ in the menu. You’ll find yourself on the other side of the tall, dividing pillar, and you can move on as normal. There’s no detriment to the narrative, or to your experience overall, and the game doesn’t shame you. The puzzles seem to sort of vary in difficulty. At first, they ramp up in a way that makes sense, and then they same to go back and forth. Personally, I didn’t find any of them too unmanageable. More than anything else, the puzzles are trial and error, and I never hit one that really stumped me. If anything, I only wish there were a few more puzzles or blocks available.

Of course, you can also fast-forward through the dialogue if you only pick the game up for the puzzles. There’s only an achievement for skipping a puzzle though, for all you completionists out there.

This does require its own category. The music in the game is fantastic. Often, I’m a person that has background noise or extra sounds going on in my headphones or around me. I’ll play a playlist while I game, have a conversation, hop in a Discord call– but for this game, I found myself wanting to listen to the sounds. The intro music on the homescreen alone had me hooked. It starts as a wonderful series of acoustic guitar chords, and morphs into less organic sounds, adding synth and twinkling melodies. It sets a curious atmosphere, one that I paused to take in before ever beginning.

Should you buy Evan’s Remains? I would say, in the event that you’re looking for something narrative and, admittedly, more than a little bittersweet, then yes. The game isn’t expensive at only $6.99 on Steam full price, and it gives about 3-4 hours of content. Still, I think the story will stick with me for a little bit. For all of the occasionally clunky dialogue and divisive reveal, I found myself considering what the ending meant for the characters, and what it would mean for me. I didn’t the ending, and was glad that there was any sort of closure to be had at all. Sometimes, closure is all we can hope for.