Why, I should be offended that you think I would smuggle illegal goods into London! Good day sir.

I kind of already have an established relationship with Failbetter’s games. I actually somehow found out about and played their first game, Fallen London, shortly after it released. Though, I don’t really remember the story or what I was supposed to be doing due to how long it’s been since. The most I remember is my log in information and that I managed to talk one of my old friends into signing up. I also remember trying out Sunless Sea when it was having a free weekend, but it just didn’t interest me at the time (though I swear I remember playing it with the old turn-based combat). So why did I decide to play it again? Well, I had past experiences where I didn’t like a couple of webcomics at first, but when I decided to give it another try I got hooked. So I thought, why not try out Sunless Sea again and see what happens. If I don’t end up liking it, at least I gave it another chance. Well, let’s just say I made a good choice. 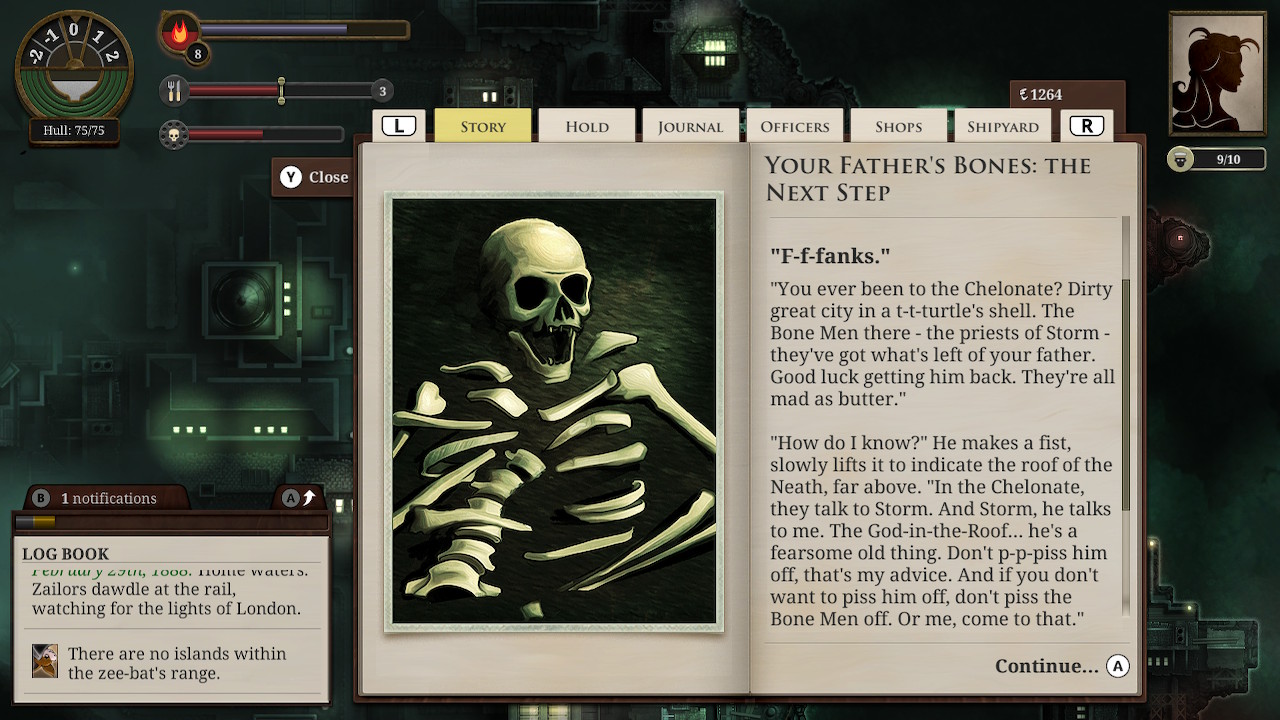 Sunless Sea takes place within the same universe as Fallen London in which Victorian London was taken beneath earth’s surface thirty years ago. Now, London is placed in a vast underground ocean called the Unterzee. Though, finding out the mysteries of what happened isn’t what you’re mainly tasked to do as it’s considered to be lore, which you’ll piece together as you involve yourself in the world or have more understanding if you played Fallen London (though it’s not required). You play as a new zailer ready to sail the zee. Before you head out, you can decide your past and your ambition. Your past determines which stat you gain a bonus in and what officer you start out with while the ambition is your main goal and will win the game once completed. Ambitions range in difficulty (especially if your past factors into it), some are hidden, and generally requires you to get involved in different questlines. My current captain is a street-urchin looking for her father’s bones. Following some leads led me to the Fathomking that has a few “small” requests. Of course, they weren’t just easy things to get and essentially requires me to sail all around and upgrade to a ship with a bigger hold. 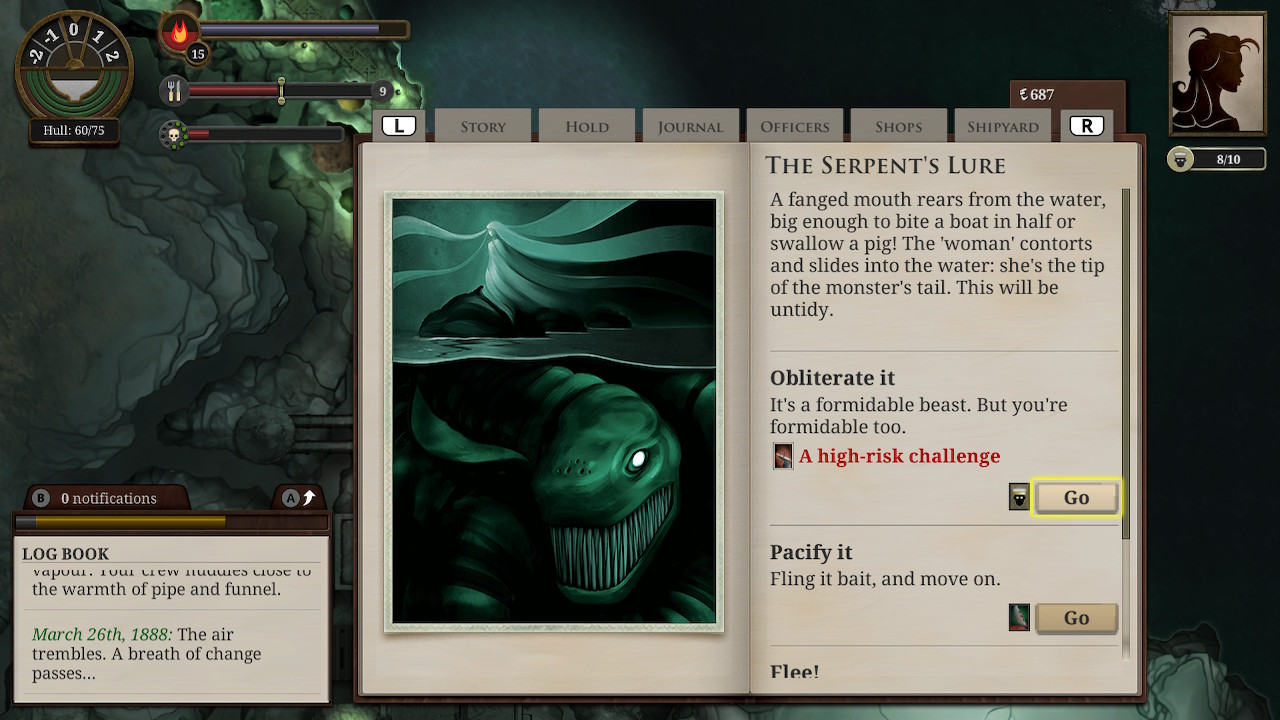 Most of your interactions within the world of Sunless Sea are through text. Mostly everything you do, from docking to getting your sweet battle rewards, greets you with a wonderfully written passage that may or may not require you to make a choice. Many choices require you to have the needed requirements (like an item) to select them and others draw on your stats to determine your chances at failing or succeeding. The only aspect that isn’t text-based is when you’re sailing across the zee. Traveling isn’t particularly fast, but it’s nerve-wracking as you’re keeping a constant eye on the top left. Making sure, or hoping, you have enough fuel to get to a port with a shop or enough supplies to feed your crew. Trying to manage your terror that slowly builds up as time goes on and deciding if keeping it down is worth the extra fuel consumption. Not to mention keeping an eye on your echoes (the currency used) so you don’t get into an unfortunate situation where you can’t afford fuel. 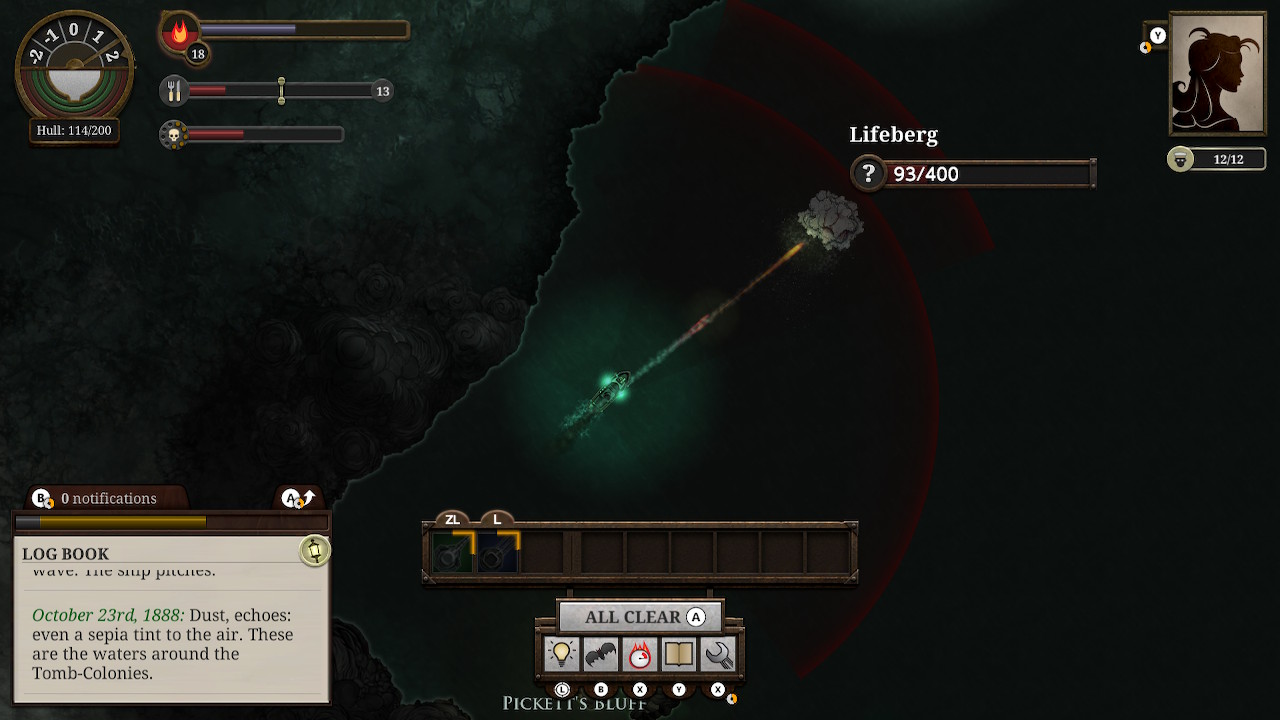 While you’re sailing across the zee to get from port to port, you’ll occasionally pass other ships (that most likely won’t hesitate to kill you) and zee beasts. When you’re first starting out, it’s typically best to avoid them and wait until you upgrade (you can probably take on the few weak enemies though). Though, once you do get that confidence, your enemies better be ready. Once an enemy spots you, your firing arcs will pop up indicating the range of your weapon. As long as your enemy is in it, your weapons will warm up. You do get an option to fire before they’re fully ready, but it has a chance of missing compared to it not missing if you let it warm up all the way. Enemy ships work the same way and zee beasts generally attack by ramming into you. Having your light on does give you a faster cooldown, but it also allows the enemy to see you more clearly. Turning it off will allow you to retreat more quickly, while also letting you get a surprise hit on them as they’re trying to figure out where you’re located. I actually came to enjoy the combat once I got the hang of it. 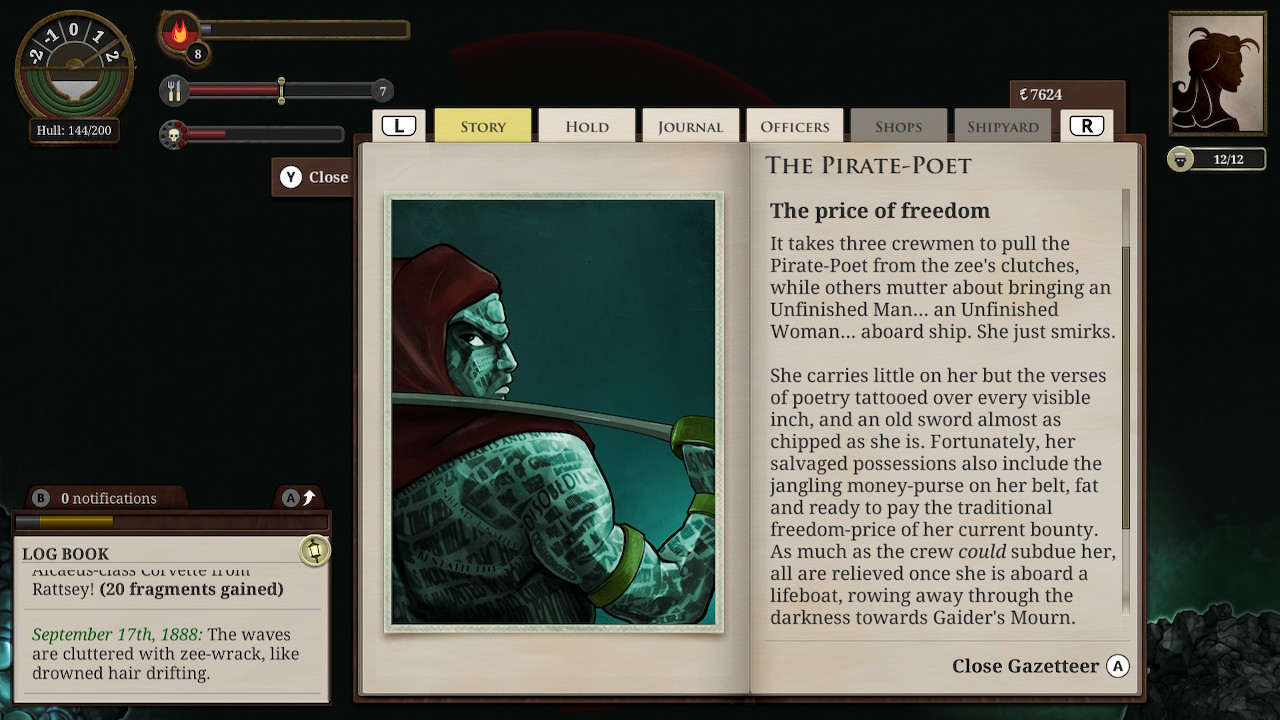 The Switch version comes packaged with the Zubmariner DLC and the Kickstarter content that is now available for everyone. If you don’t already know, the Kickstarter content is the Pirate-Poet and the Cladery Heart ship. The Pirate-Poet starts by hearing a rumor about them, and then sinking an Alcaeus-class Corvette and investigating the wreckage. While the Cladery Heart requires you to do the Cladery Heir’s questline to get the deed. Getting yourself a Zubmarine requires you to go down to Port Carnelian to do a relatively quick questline. Once you complete it, you’ll be able to transform your ship into a zubmarine and dive down. You’ll have to worry about your Oxygen levels on top of everything, but you’ll now have access to the underwater ports, see what’s beneath various landmarks, discover more zee beasts that threaten to destroy your zubmarine, and treasures. Instead of using a zeebat, a sonar will occasionally go off to give you a rough location of where an undiscovered port is with enemies and treasures bathed in a glow until you shine a light on them.

It’s also worth noting that once you unlock the zubmarine, the only thing you have to do in future runs is to go down to Port Carnelian. You don’t have to do the quest again. 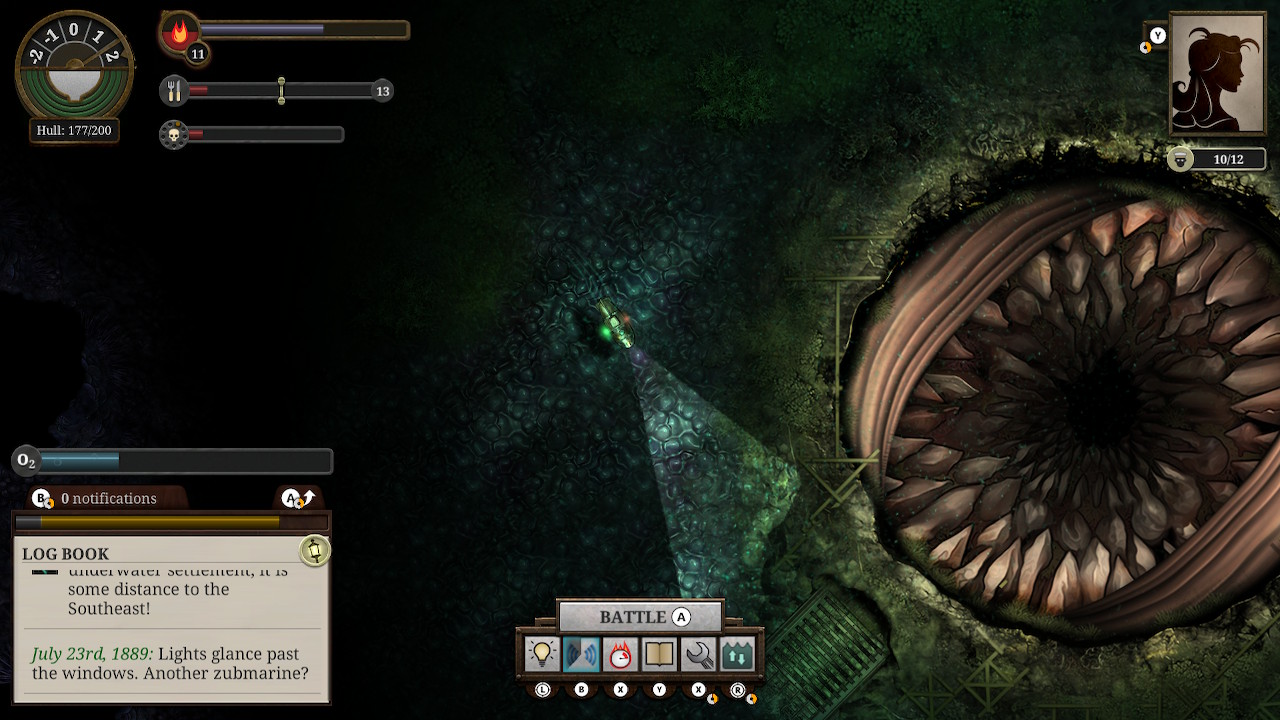 So how is Sunless Sea as a Switch port? I’d say it’s a pretty good one. One of my main concerns was the text size as I even had trouble trying to read it when watching a video on beginner tips even if it was on a computer screen rather than on my phone. Luckily, it wasn’t much of a problem. I played mainly in handheld mode and the text was big enough to read with little to no trouble. The only trouble I had control wise was finding the button for the map, but that was ultimately my fault for not paying attention to the log book (which tells you the button for it) nor looking at the controls section on the pause menu. I haven’t encountered any stuttering either, and I’m pretty deep into my current run. 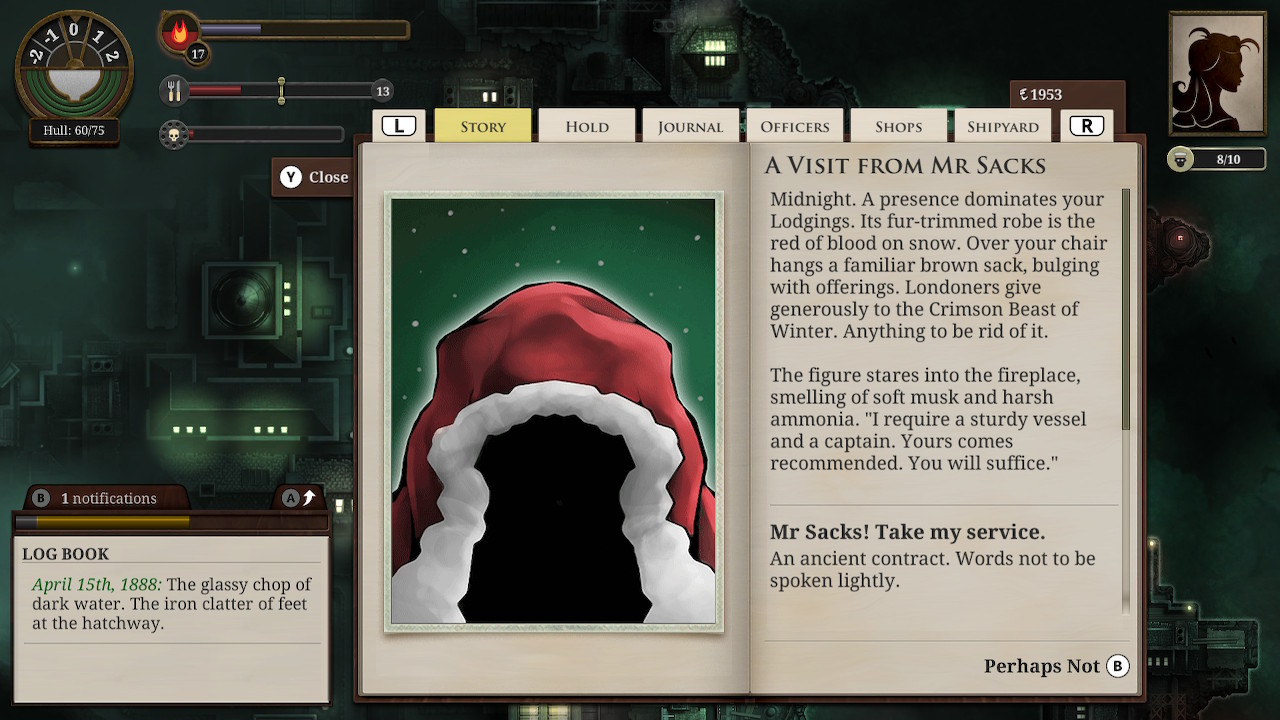 The only thing I can’t help but wish was touch controls. I’m not holding it against Failbetter Games as much as I would with other games (*cough* franchises that started on the NDS with touch controls *cough*), but the one awkward thing with this port was with the journal. You either have to deal with a slow scroll with all the sub-categories expanded (as you’d have to scroll down again with the directional pad again to expand it), or use the directional buttons to scroll down with the categories collapsed.

Talking about the journal, it’s a weakness Sunless Sea has. I had difficulties trying to find the questlines I had active so I can see where I was supposed to get or go to. You pretty much need a really good memory or write it down so you can quickly see where you left off, especially for console ports (assuming the other ports works the same way as the Switch one). 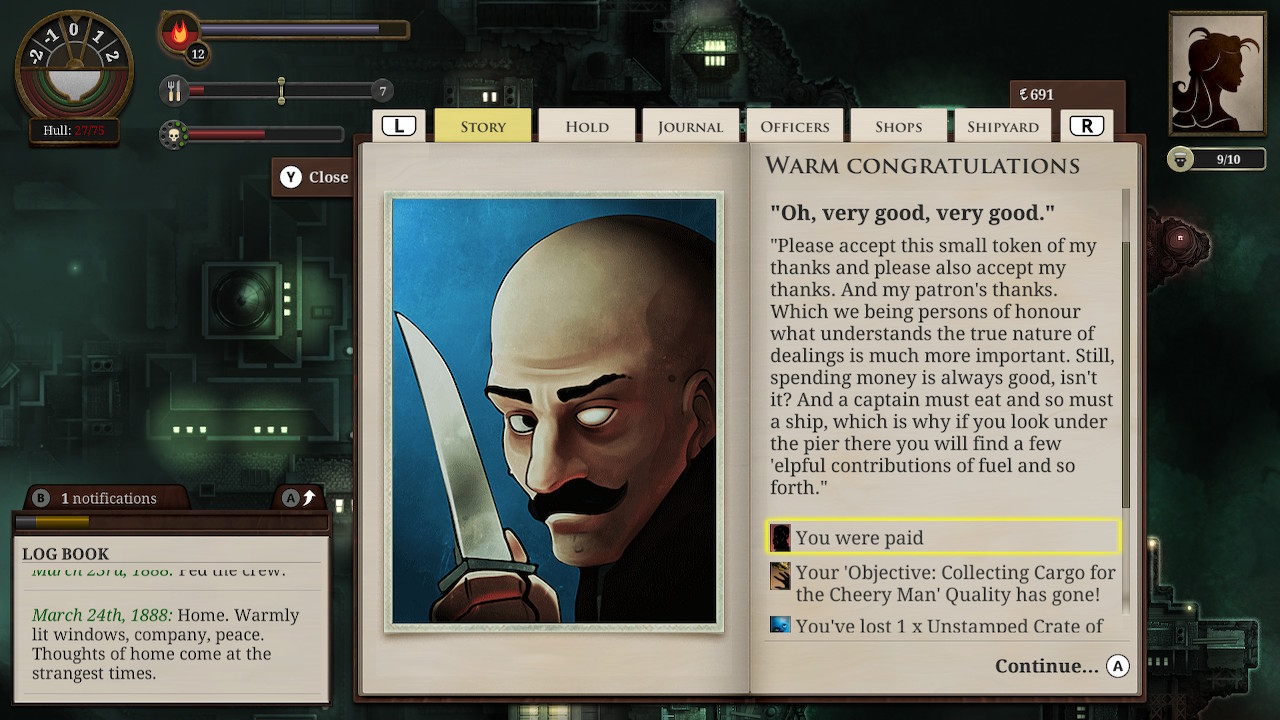 I’m really glad I gave Sunless Sea another shot. While it does have a slow pace and it did take a while for me to get hooked, I generally enjoyed reading about the world, traveling the zee, and fighting zee beasts or ships. Sunless Sea was also strangely relaxing coupled with the traveling speed and the music/sound effects, at least when I wasn’t worrying about dying or running out of fuel/supplies. Sunless Sea is definitely worth checking out if you’re someone that loves visual novels/choose-your-own-adventure stories, don’t mind if you die a lot, and don’t mind how slow paced the game is.

With Sunless Skies coming to consoles hopefully in August or September, I’m honestly pretty excited. I’ve been hearing about the improvements it made from Sunless Sea, especially with the journal, I can’t wait. Until then, I’ll be sailing the seas.