No don’t heal yourself, heal your teammate!

Have you ever wondered what happened after your epic adventure in some games? After you reach the end, does that world pass your tale on so what you did is remembered? Do future generations hear your adventure and wish they had the chance of embarking on one as well? Does the villain come back (assuming they weren’t killed) with a vengeance or maybe some other villain rises? Well, Heroland takes place sometime after the grand adventure that saved their world. After the feelings of people wishing that they could go be a hero just like what they heard about, multiple companies have taken it upon themselves to do just that. Well, close enough at least. They made theme parks to be as close to the experience as possible… without the customers having to deal with the real thing. 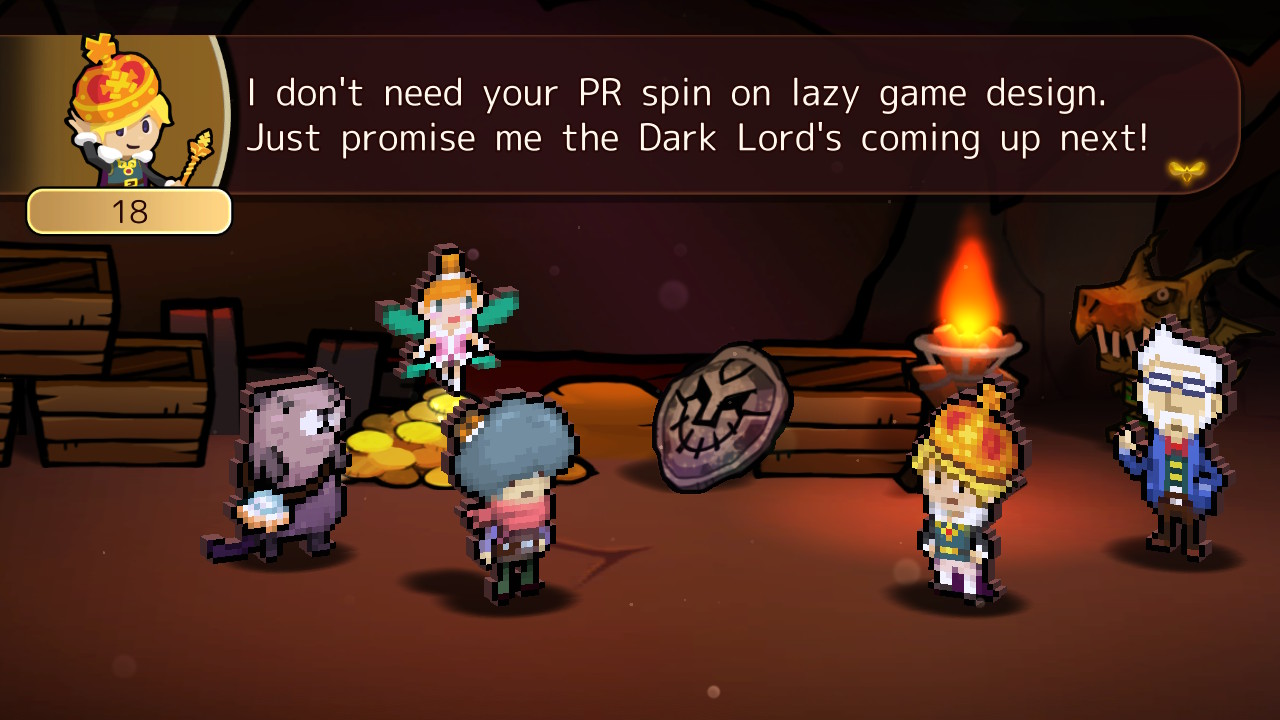 You play as Lucky who is arriving at one such theme park named Heroland, which is said to be the best out of the bunch. He isn’t going to participate in it, no, but to work there. He’s hired as a tour guide, but it doesn’t take long for things to get bleak for Lucky. Despite the nickname everyone calls him by, he isn’t actually lucky. At the end of his first day, he goes into a deep debt after “knocking over” and breaking a hundred million $tarfish vase Haruhi style (which may happen more frequently than you think), quickly learns that things are terrible behind the scenes as some coworkers are often forced to get Mascot Surgery (which Lucky is also pushed to), and he’s called by a nickname a customer called him for the rest of his employment rather than his real name. 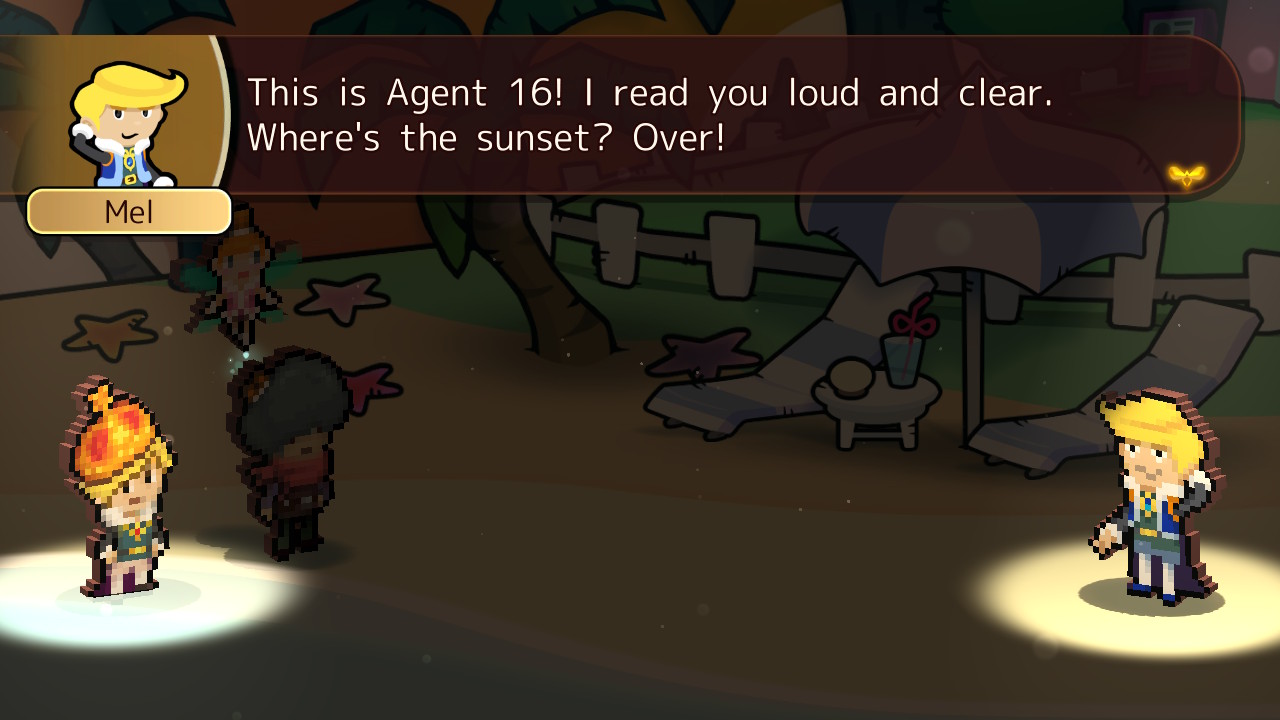 Aside from Lucky, Heroland focuses on his customers that he has to guide, most notably Prince Elric (which ironically gets nicknamed 18 by the company after he nicknames you). Prince Elric arrives at Heroland to fight for his place on the throne as he was pushed to being the 18th in line. He wants to prove himself to his father so he can climb back to being number one by defeating the Dark Lord… again. However, he doesn’t realize that this is just a theme park based on a true story rather than the real deal. You’ll also get to know your other customers and how they interact with the others. All of them have their own mini-story that melds how they are normally and what they came to Heroland for. To name a few, you’ll meet Mel, Jason, and Kotori. Mel is 16th in line to the throne and you’d think he’ll be Elric’s enemy, and it certainly looks like it, but they’re actually childhood friends and their relationship is pretty great and had me heartbroken towards the end. Jason and Kotori are a couple, but Jason thinks he isn’t good enough and his side quests revolve around boosting his confidence. Kotori, though, has a secret identity that actually takes center stage during the main story. 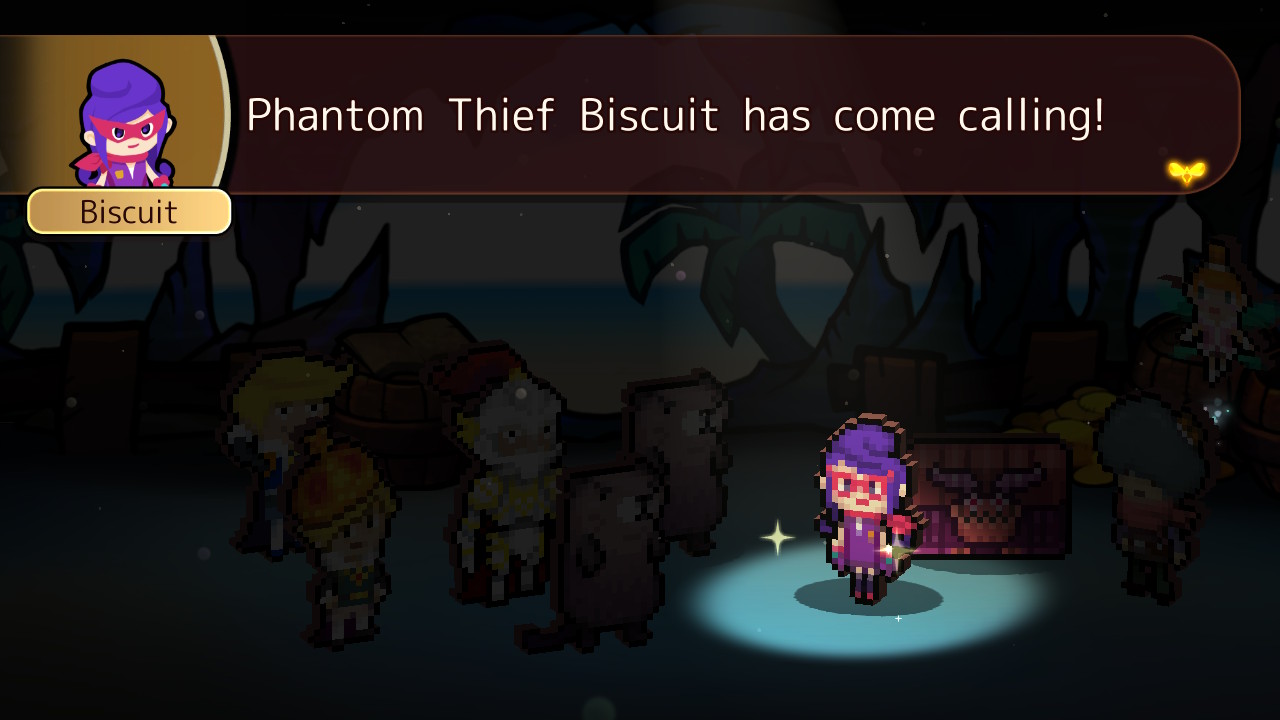 Before you’re ready to guide your customers through dungeons, you’ll have to get ready first. You’ll have to buy on items (don’t forget to put them in your pouch!), buy weapons so customers can rent them and inevitability break them, and talking to people if you see anyone lurking around (whether it’s one of your customers or someone completely unknown). Once you’re ready, you’ll select the quest you want and form the team assuming all of them aren’t the mandatory VIPs. You’ll be able to choose between a story quest, a side quest once they become available, and free quests if you need to grind levels or want a specific drop. Each customer (or hero) has their own preferred role and those roles go with a weapon as well as a recommended placement in their formation. Tanks are towards the front with their hammers, warriors use swords, mages uses a staff, healers are in the back with tablets, and freelancers are happy to take any role. If one of them is holding the wrong weapon or you want to switch with one that hits the dungeon’s weakness, you can switch which weapons they use otherwise it defaults to the best weapon in the type they specialize in. 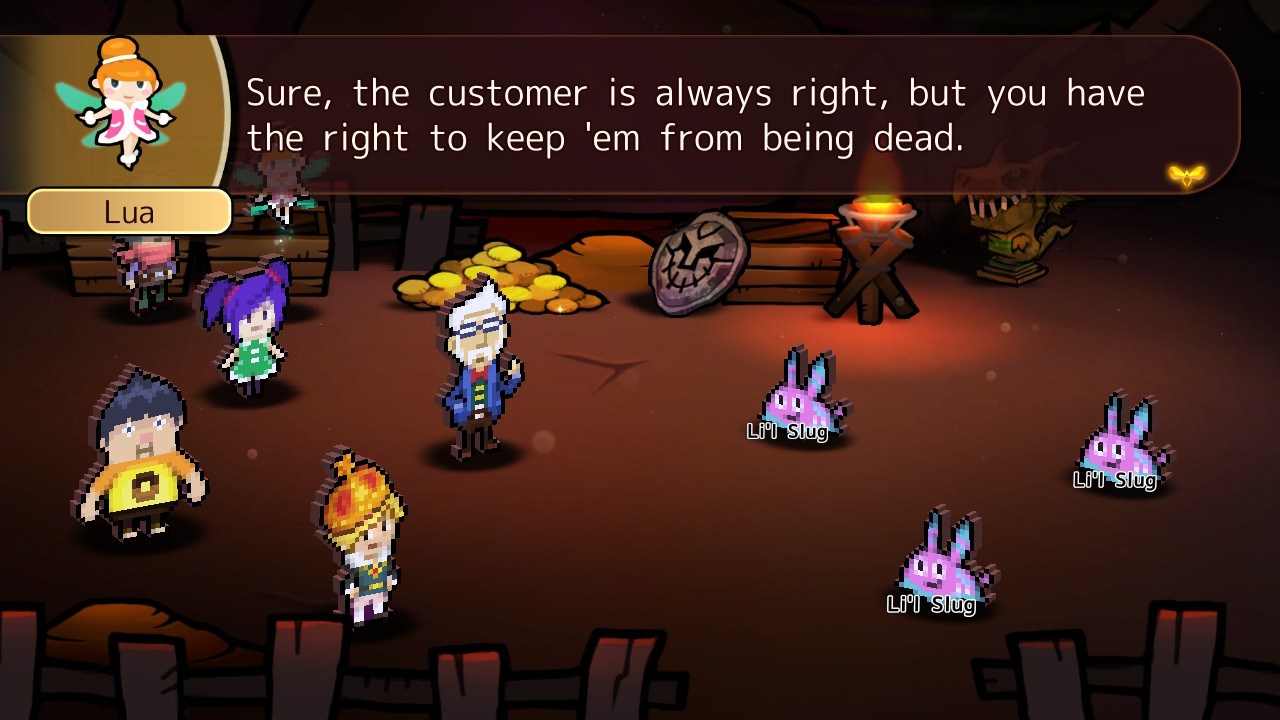 Once you’re ready to go into Heroland’s crafted dungeons, they’re actually straightforward and bite-sized in favor of their customers. They all are made to be replicas of the real places the original team that defeated the Dark Lord took and you’ll be able to hear snippets of the events. Each dungeon has you running straight through with each encounter space either being a story cutscene or a monster until you arrive at the boss. Sometimes you’ll have a choice between two or three monsters (with the middle one being the difficult one out of the three). During combat, you’ll mostly be sitting back and watching your group take care of the monsters. Your role as a guide is to, well, guide them through the fights. You have the ability to see what a hero or enemy is planning to aim at as well as what skill they’re planning to use. I’d say the AI is pretty good and is believable considering it’s simulating working with people that have never adventured and probably never fought with their teammates. Some even have noticeable quirks. Have you ever used an AoE attack when there was only one enemy left? Or healed someone when they didn’t need it yet? Well your heroes sometimes will. As a tour guide, you’ll be able to deal out recovery items, set a tactic like having everyone guard or attack a specific enemy, or guide one hero to either guard or to switch up what attack/skill they’ll do. In addition, heroes will randomly chat during combat and it has a chance of being the start of a Chat Skill that can either debuff the enemy or deal damage once it gets to the last person, however it can be interrupted if one hero isn’t feeling it. 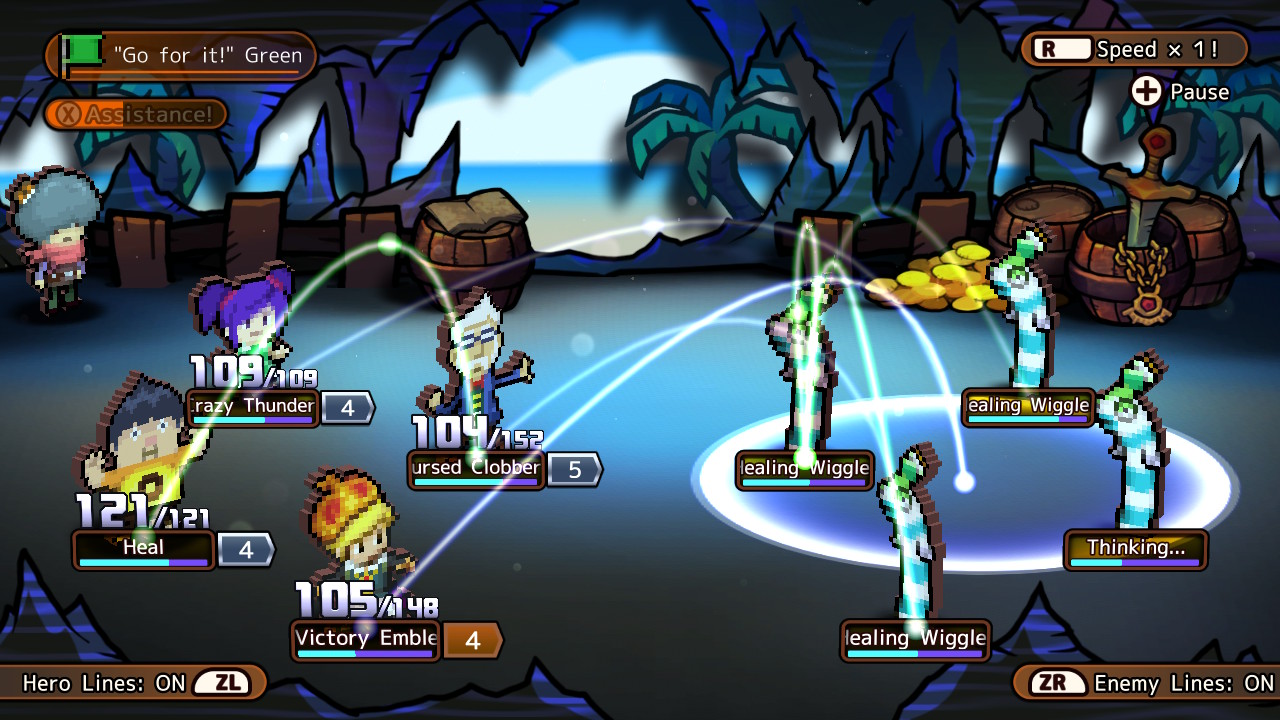 Every monster your team defeats drops MonCoin, which acts like experience, and a chance at dropping a plushie or a replica. You can take them for yourself to decorate your room and get more weapons to buy, but you can give them to the heroes so you can raise your friendship with them and increase their happiness. Levelling up friendship will unlock side quests (each character has 2-4) and improves their personal skill. Once you get to the end, everything will be tallied and dealt out. MonCoins are equally distributed to each member, with unused heroes getting some as well; happiness transfer to how satisfied they were with the tour, which then determines how many likes Lucky gets so your level will increase (which increases your pouch size and lowers your cooldown time); and you’re rewarded with $tarfish for your hard work. 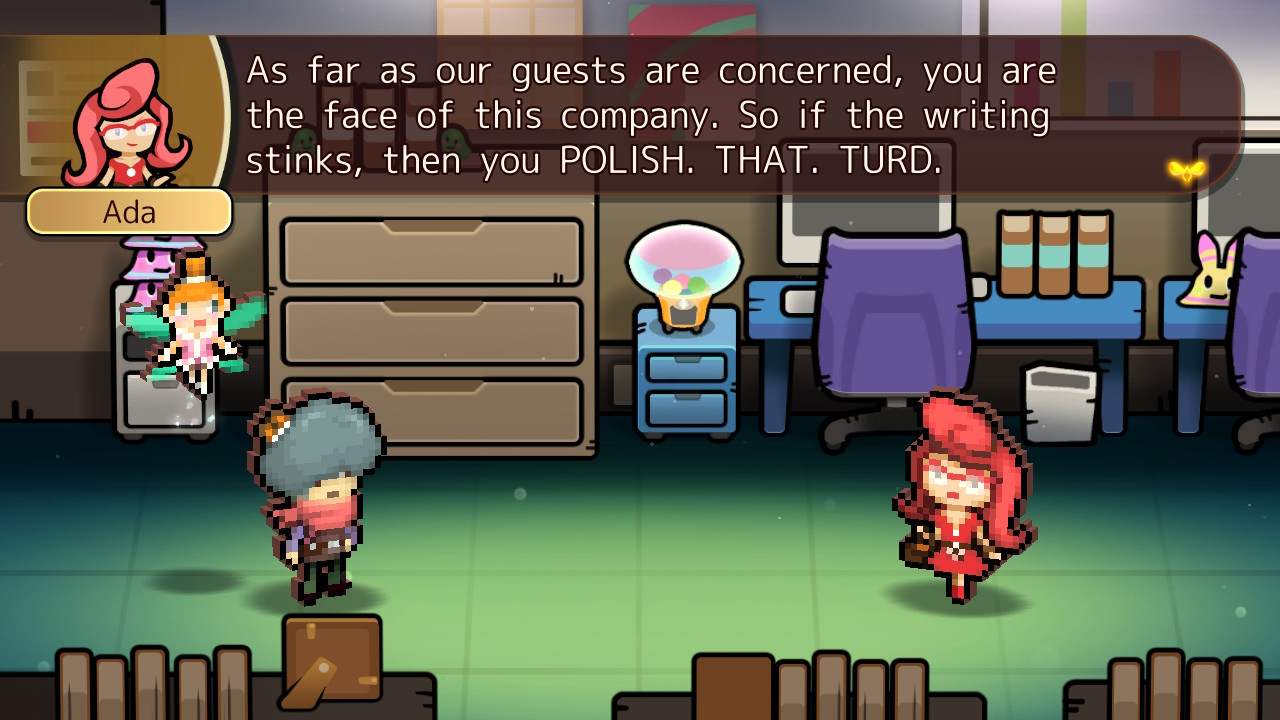 For people that are worried about the amount of grinding needed, it’s not too bad. At least not for the vast majority of the game. I only found myself grinding at the first two chapters (maybe a bit into the third) and at the last chapter. After that, the recommended levels tended to be closer together and the sea of side quests helped me train those needed in the story quest if there was a free space available. The last chapter was the biggest level gap, for me at least, as most of the VIP heroes were around level 29 rather than level 33 since they weren’t needed as much. Though, I suggest trying to see if you can beat it first before grinding it out. The Prince was the only hero that hit the recommended level for the last four story quests, with the rest being two to three levels underleveled, and I still managed to complete them. Were there any close calls? Yes. Did I think I would fail once I got to the boss? Definitely. Though I have to admit I kind of enjoyed the challenge and the feeling of winning despite all odds. 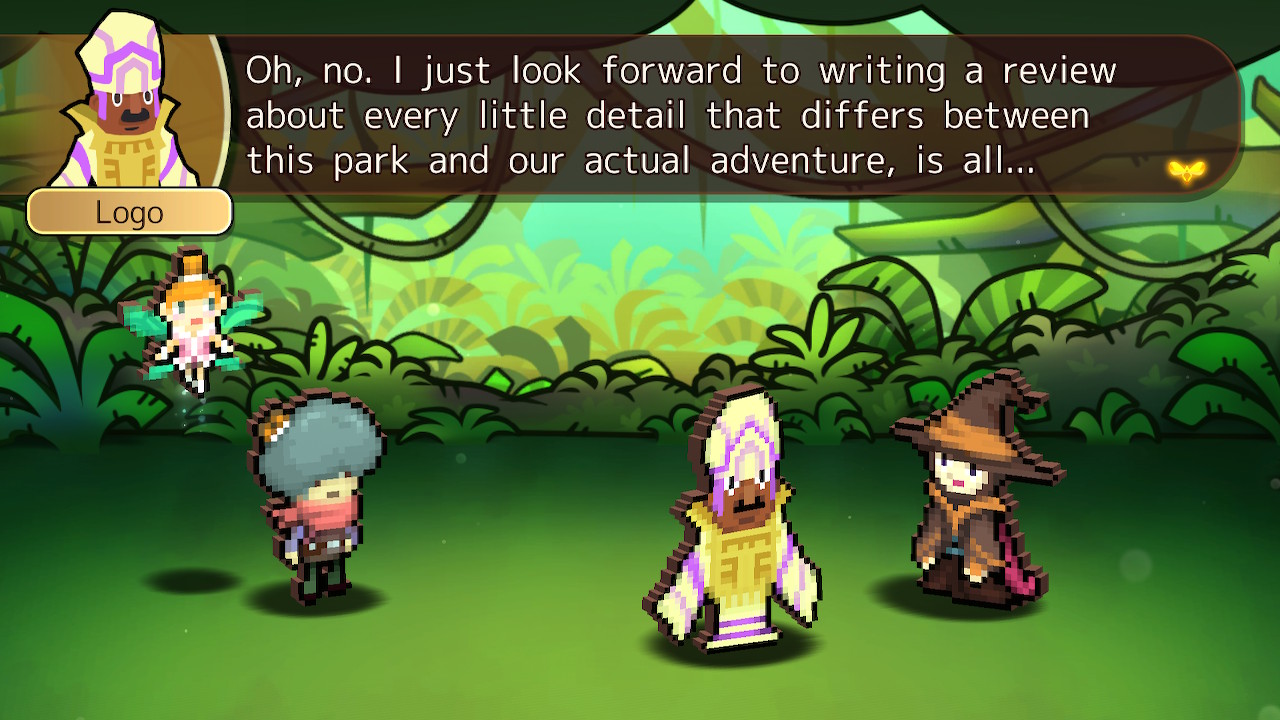 Once you complete the story, you’ll have the freedom to complete anything you haven’t already as previous heroes that left your care will return. You can max out your friendships with all heroes and complete their side quests, defeat each monster to complete your MonDex, play the postgame free quest that contains harder enemies, and acquire all plushies, replicas, and furniture items. 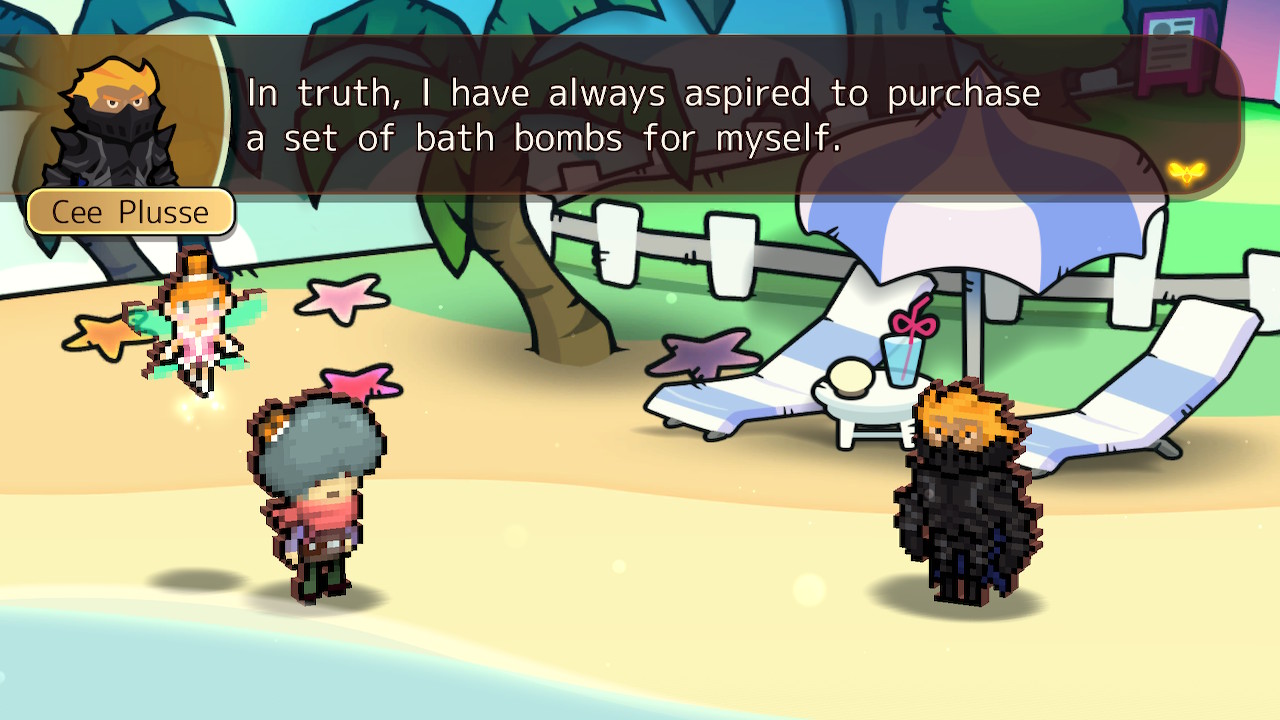 Heroland is a strange title that is only going to hit a niche audience. The story is fun and goofy with a bunch of references baked into the dialogue and story. There are references to Ouran High School Host Club, Persona 5, Fruits Basket, One Punch Man, Naruto, How to Train Your Dragon, and many more that most likely flew over my head (whether my sleep-deprived self didn’t register it or I never watched/played it). Heroland also doesn’t let the setting go to waste as the game obviously has a satirical undertone. However, Heroland isn’t going to appeal to you if you’re someone that would rather take the reigns during combat rather than sitting back as the AI fights for you with interruptions here and there where you try to direct them. For those that don’t mind, settle down for the long haul for the ~40-hour long story.