Would you give me the honor of… being my business partner?

Max Gentlemen Sexy Business starts out with you, an incredibly rich person, finally returning home after your most recent grand adventure. What your grand adventure entailed depends on what you picked out of a couple choices. After retelling it to your Business Maid and Battle Butler so your adventure can be told to the general public, you’re arranged to be knighted to give it a perfect ending. Well, more specifically your family business as you can’t exactly get knighted again. However, when it came time to present your paperwork, it couldn’t be found. Your rival has stolen both your business and your fortune while you were away. Curses! Before all hopes were lost, you luckily get help from an Angel Fullbody. You happen to share the same rival as Angel Fullbody and she wants your rival to lose so she loans you some money to start another business. 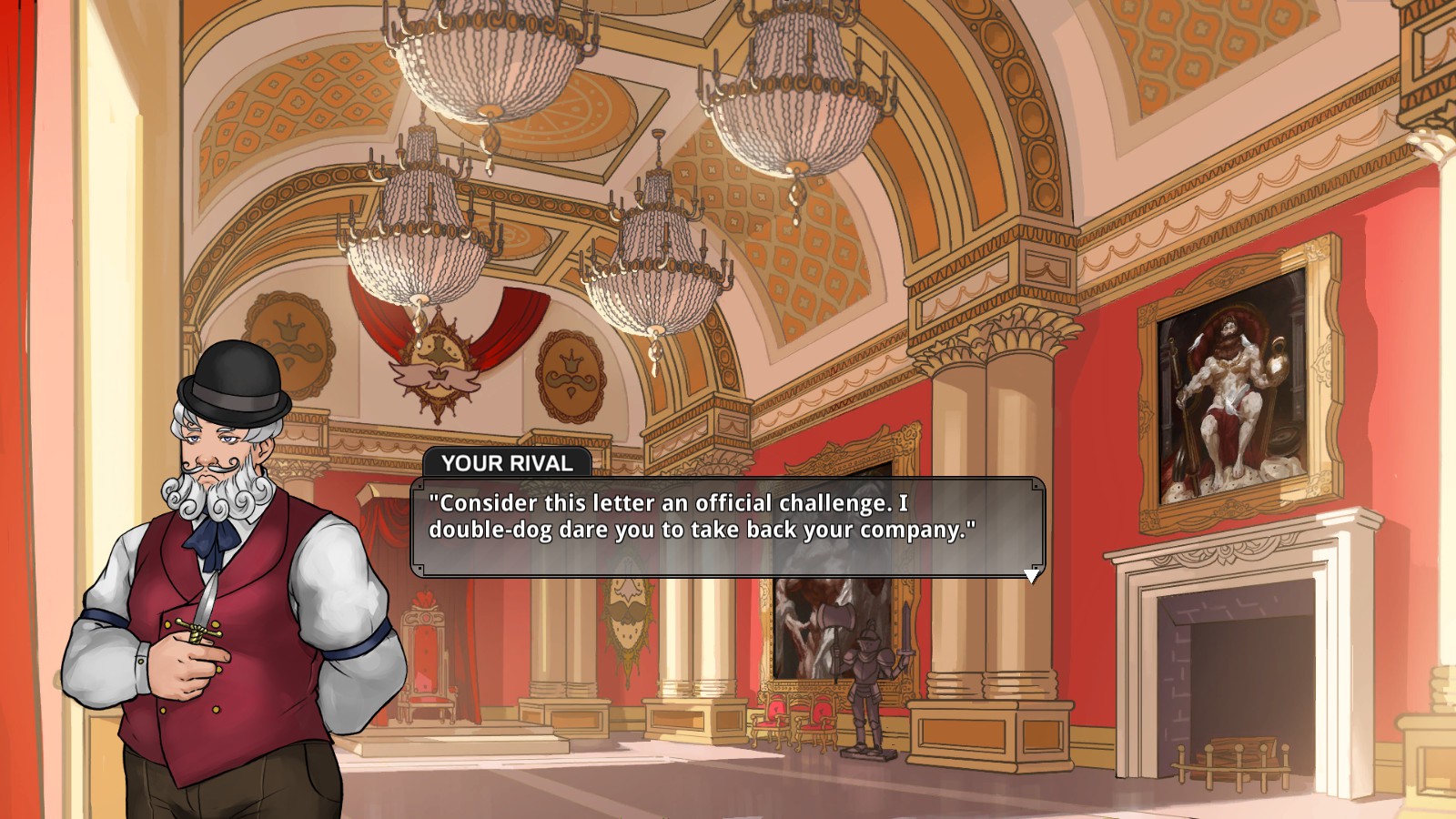 Now that your new business is up and you picked your first business partner (aka executive), you’re ready to get right into managing your business. There are a couple things you will have to worry about if you want to successfully beat your rival. While you’ll only start with only one executive and one board chair, each executive has differing levels of skills that need to be trained or assets to gather. First, and most importantly, each executive specializes in one market and the number of shares you hold will depend on how much they’ll make when at the Trade Building. Then there is the mustache skill, trainable at the Barbershop, which determines how many employees they’ll recruit in the Slums and fisticuffs, trainable at the Boxing Ring, which determines how much damage they’ll do. Fisticuffs and employees together will let you successfully take down rival companies in Town Square. Employees act like health as each hit will deplete them depending on the fisticuffs level and once the rival runs out, you’ll win their shares, a reward, and be one step closer to the district boss. District bosses have to be defeated in three minutes (you can try again) so you can move on to another district and be one step closer to defeating your rival. 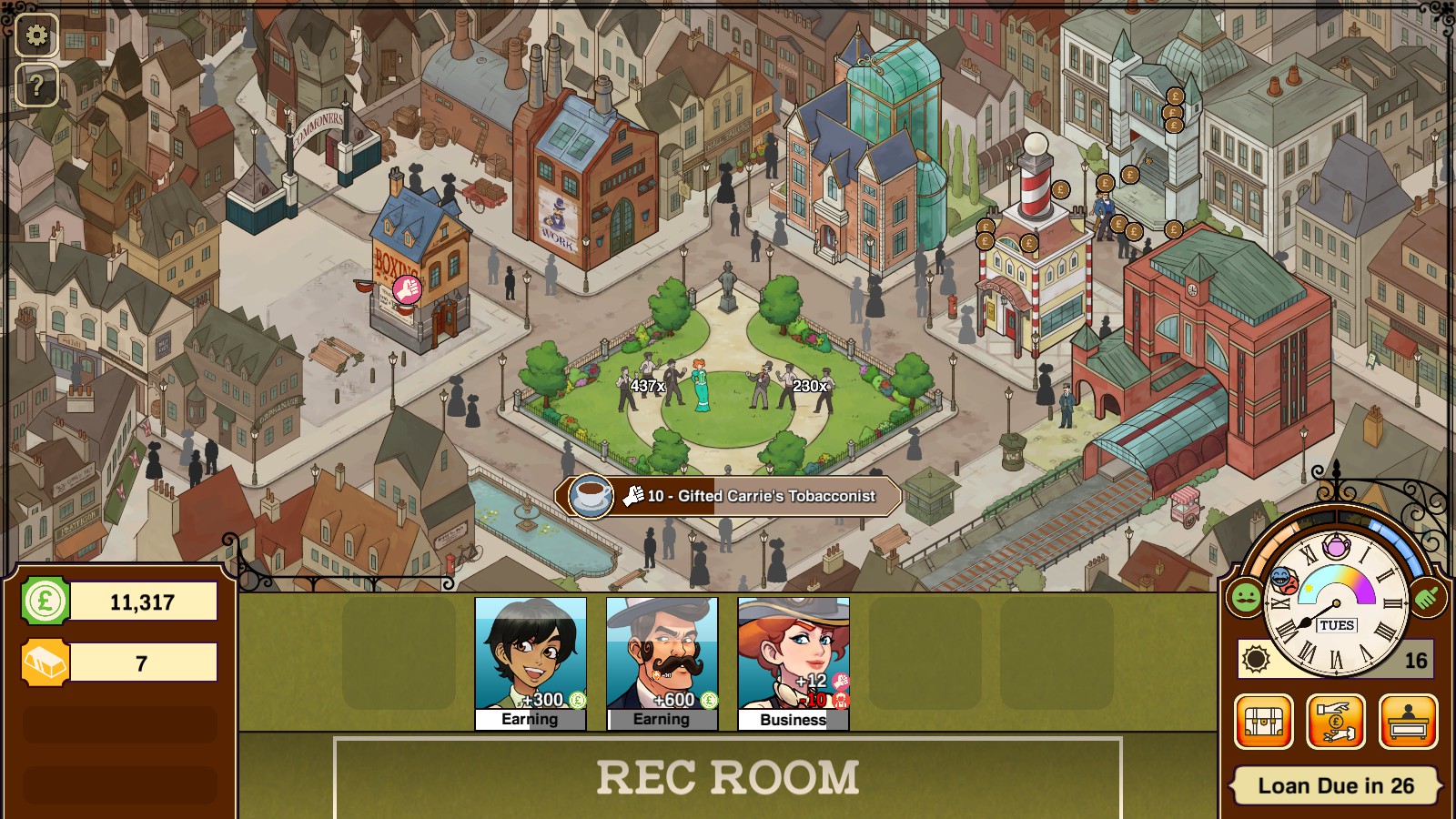 So basically, you’ll be sending your executives to different buildings (kind of like HuniCam Studio if you ever played it). However, executives can’t be working all the time as their moxie will run out and they’ll need to rest. Since one executive can’t gather money, train up, gather employees, and fight, you’ll have to figure out which executive will have what job. So a couple may focus on training up and gathering employees to defeat rival companies while one or two will only worry about making money when it’s their turn. Each executive does have a unique skill to somewhat influence what job they’ll have as they’ll half their moxie usage if the condition is met. So someone like Penny Farthing will most likely be relegated to making money as she gets a bonus at the trade building (let’s just hope your money makers get lucky and control the most shares rather than one of your fighters). Of course, once you reach the point where some executives will be neglected skill-wise there are a few alternatives for them. You can send them travelling to get items or equipment once you unlock the train and buy routes; you can send them to your Executive Office to produce favors you can trade for money or other resources, or you can put them to work if you need money fast while your fighters are resting. 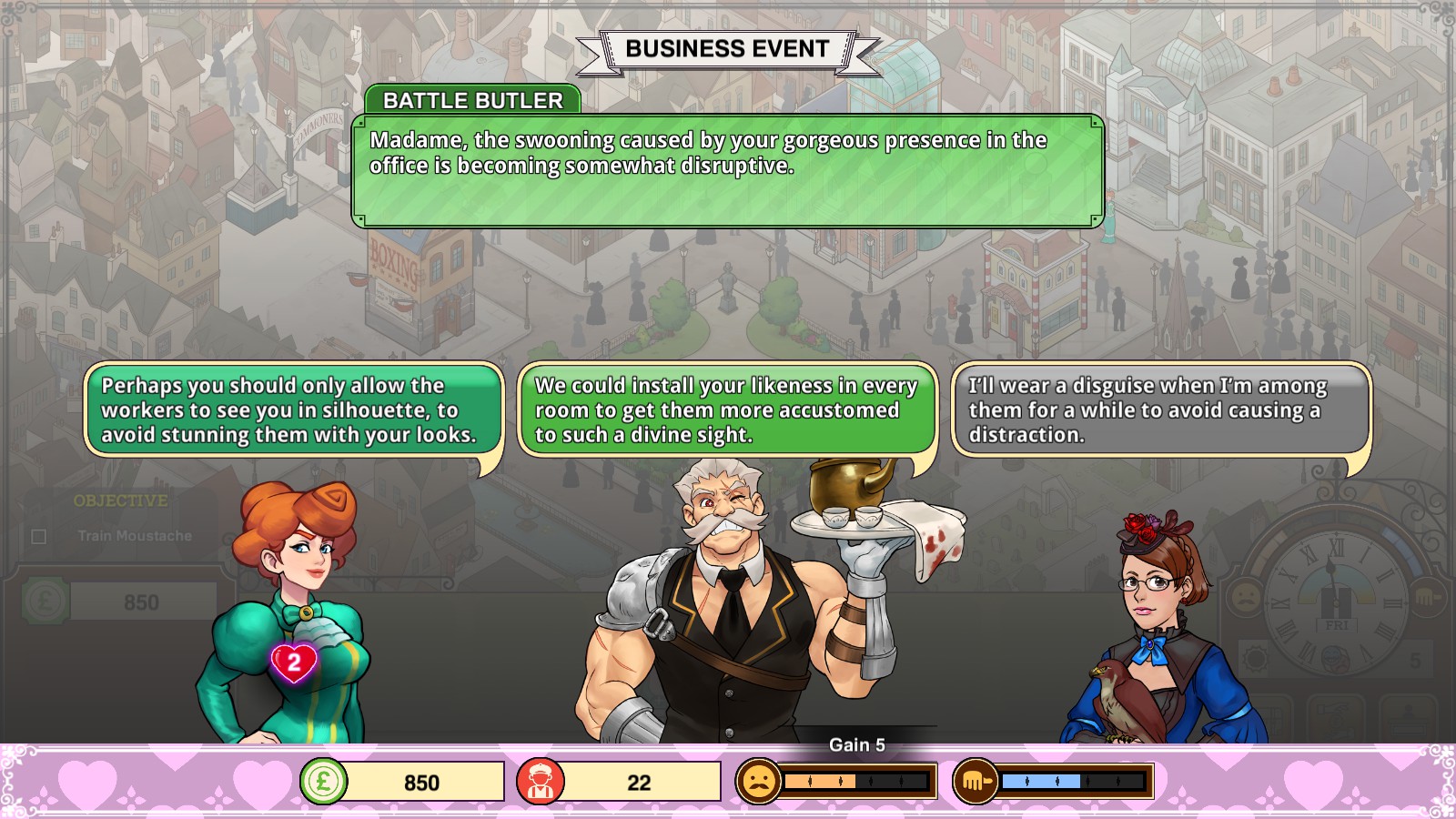 An event will occur almost every day as well. There are business events where you choose between three options that will either increase or decrease affection, money, employees, morale, and/or reputation. Morale and reputation in particular are important to keep up as high morale will spawn parties outside a random building so assigned executives won’t use any moxie during that time and high reputation will spawn cheering crowds at the Town Square which will guard your executive’s employee pool. The weekends are reserved for executive galas and merchants. To get access to them you’ll have to pay an upfront cost to either get a new executive or a new asset depending on the week. Grabbing assets gives you a bonus, like increasing how much fisticuffs you’ll gain at one time, or unlock more board seats. 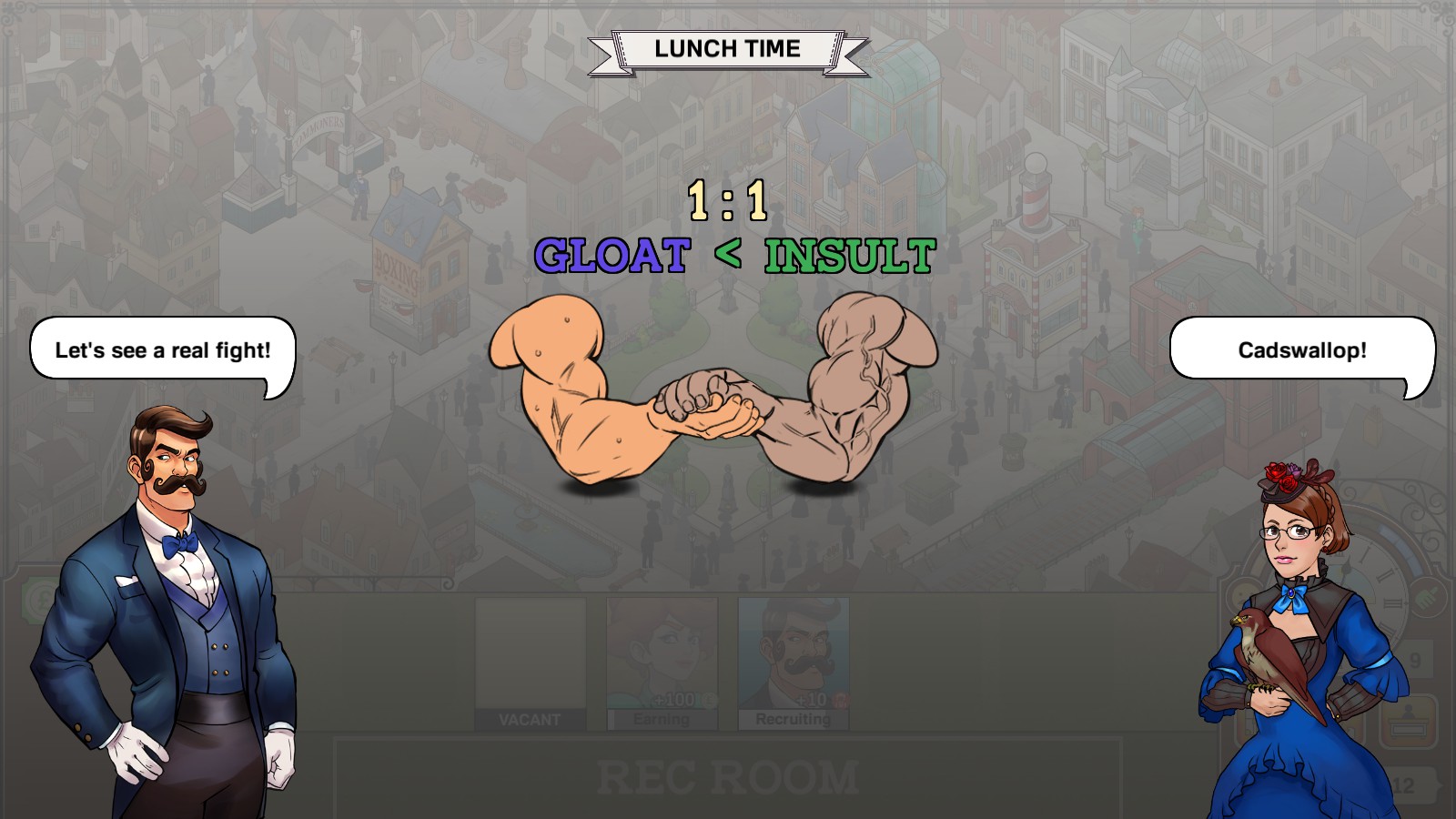 Lastly, once lunch dates are available, you’ll be able to play a minigame to get a chance at increasing an executive’s affection level. Lunch date minigames are pretty hit or miss in my opinion. You’ll mostly run into the rock-paper-scissors wrestling game or the tea making game where you guess how they take their tea, with blackjack popping up less often, and a massaging minigame showing up after crossing a certain relationship level. Depending on how well you do, you’ll either gain 0-3 hearts, which can be frustrating as the only way to get affection is through finding and gifting flowers. Raising your relationship level doesn’t necessarily give you much of an advantage other than more equipment slots, but it does let you continue their date storyline, unlock artwork, and unlock more costumes for them. 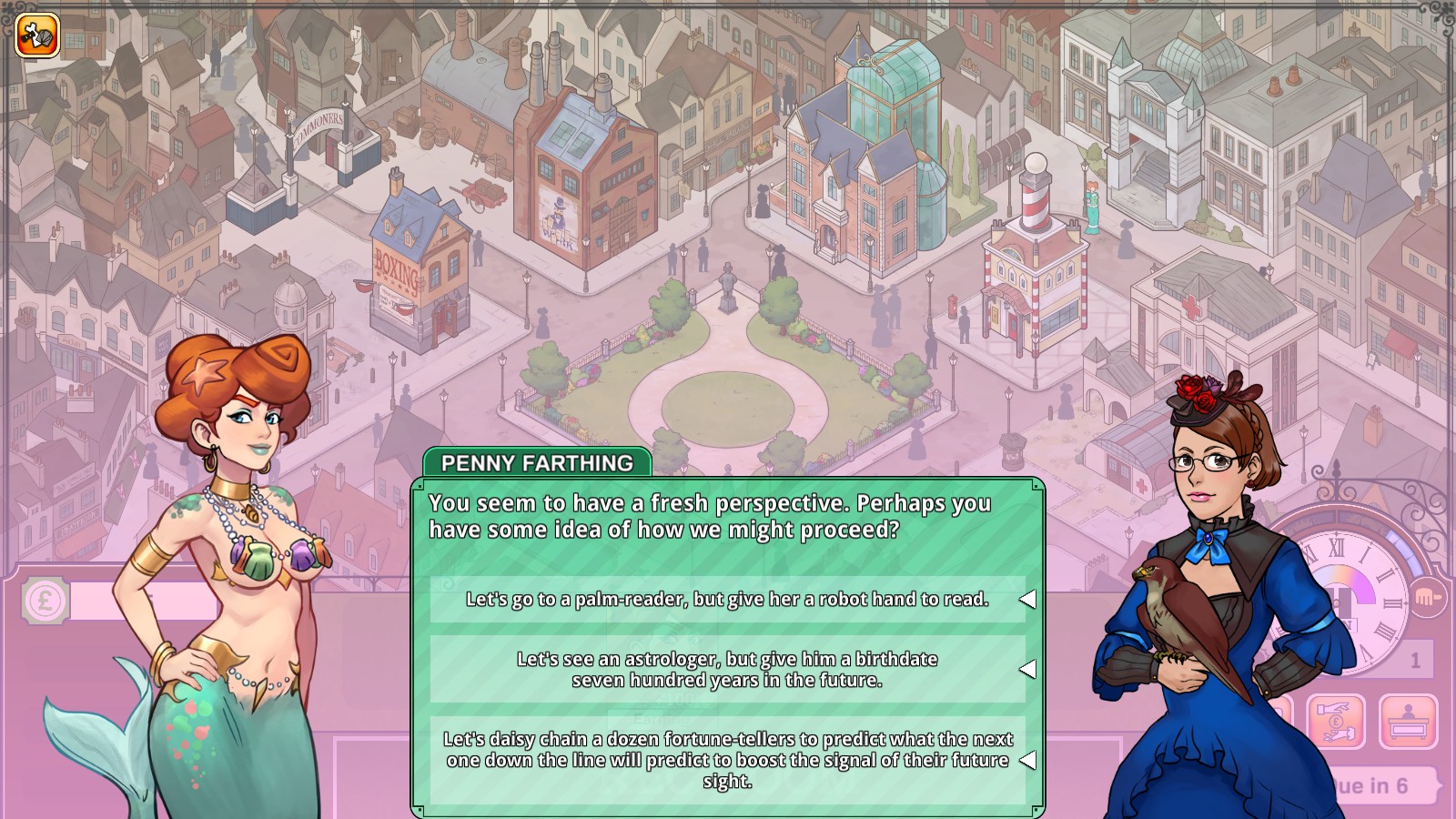 Remember that loan from Angel Fullbody? Well, don’t think you can just bail on it. If you don’t pay it in full, your game ends. However, paying your loan gives you perks. Paying them on time will give you access to buildings you need (as you only start with the Trade Building, Town Square, and Slums), lunch dates, more executives, and guaranteed board chairs. However, I don’t recommend paying off your last loan fully until the very last second. Once you pay all three loans you’re then given a week to beat your rival. If you can’t, you’ll either have to accept defeat or pay 100 gold to extend your deadline. Worse yet, the price for an extension increases by 100 each time. So if you weren’t already close, you’re pretty much screwed. Personally, I was so hours away from losing as I couldn’t make up the gold in time before my executives somehow won against my rival.

After you beat your rival for the first time, you’ll be treated with a reveal of the true villain. Once you start a new game, the story will include the true villain who has, you guessed it, stole your business and your family heirloom. The game plays similarly from here, but there are more districts to conquer and another loan that will give you the ability to make Kingsmen to increase damage. 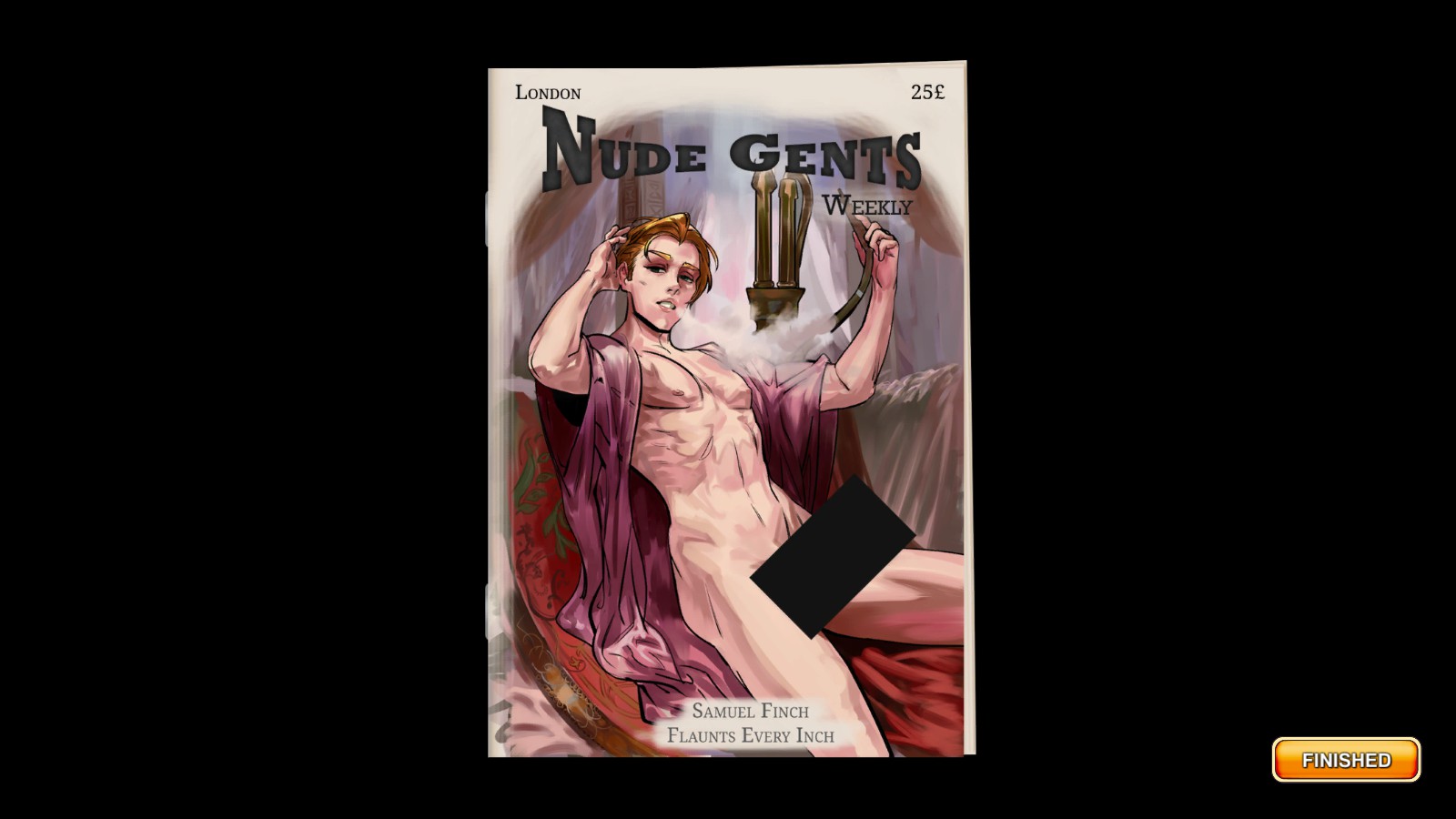 Max Gentlemen Sexy Business’ negatives mostly depends on your preferences. If you’re coming in expecting emphasis on the dating sim aspect, you’ll probably find it disappointing as it’s rather light on it. Each executive does have their own unique storyline emphasizing their interests and traits that spawns through all their dates, but you’ll have to get lucky with the lunch date minigames and find a lot of flowers. Those coming in mostly for the explicit content will probably be disappointed also as the most it goes is having revealing clothing and nude art (the sex scenes are quickly described in a couple of lines from what I’ve seen in the four executives I’ve romanced). While the voice acting was great, there isn’t much of it and it made me wish for more. Lastly, I wished there was also a speed-up button. 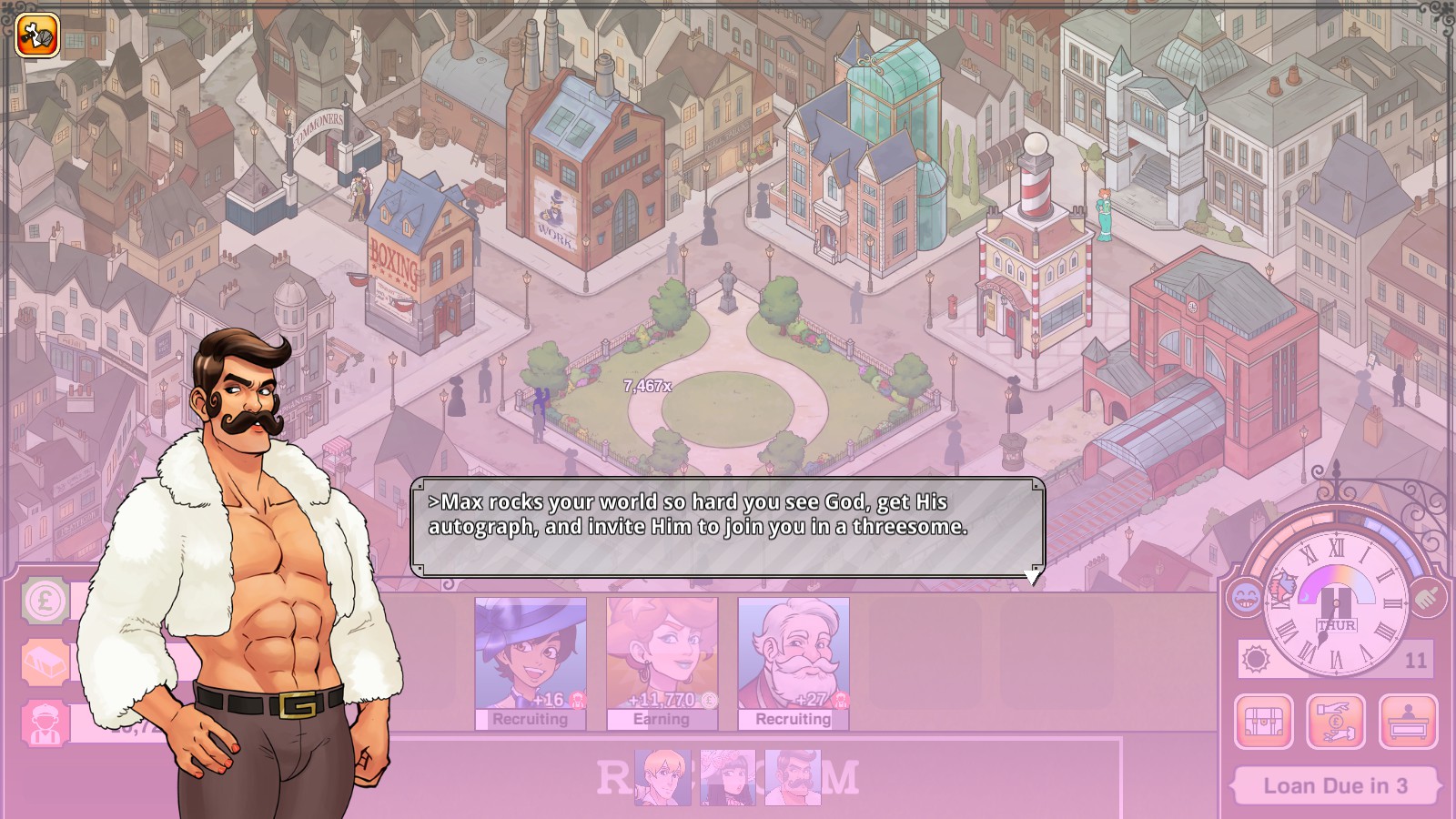 I’m pretty much dead neutral towards Max Gentlemen Sexy Business. I did enjoy the level of silliness it often went to and the characters, but I feel like I was just passively going through the business management part with spikes of stress as the load deadline started rearing its head and I didn’t enjoy most of the lunch dates available. Though, it did keep me under the constant “one more day” loop. Maybe I was just expecting more of the dating sim part than what was intended. Either way, Max Gentlemen Sexy Business will be perfect for anyone who loves management sims and don’t mind having light dating sim aspects. Each playthrough is about 5-6 hours long so if you’re behind on a podcast or a video you don’t have to pay attention to the visuals, it would be a good time to put it on while playing. Just keep an eye on the game (or keep one earbud out) so you can switch executives when necessary.

If you’re in for the business management, but not really sure if you’ll enjoy the silly writing or the characters enough to date them, there is a Kickstarter demo that you can still download. It doesn’t reflect the gameplay, but it’ll give you a taste of the characters and how everything is going to be written in the full game (I even noticed some lines that I remember reading from the demo).