A cyberpunk CCG with just the right amount of attitude.

If you’ve been following some of my recent reviews you’ll have noticed that I’ve been on a bit of a deck-building / collectible-card game binge recently. Given that, I thought it was probably a good time to digitally dust off my System Crash steam key, especially since I’d only played it for an hour or so previously. And because it’s also almost four years old now and I really should give it another shot!

When I started playing it immediately reminded me of the old Netrunner table-top CCG from the 1990’s, created by Richard Garfield, who also created the much more popular Magic the Gathering (M:TG).

While I suppose this is the closest there is on Steam at the moment (though there’s a free fan-made version of Netrunner available elsewhere), and while it definitely does sort of similar in art style and setting, the gameplay is definitely different enough to enjoy on its own merits. 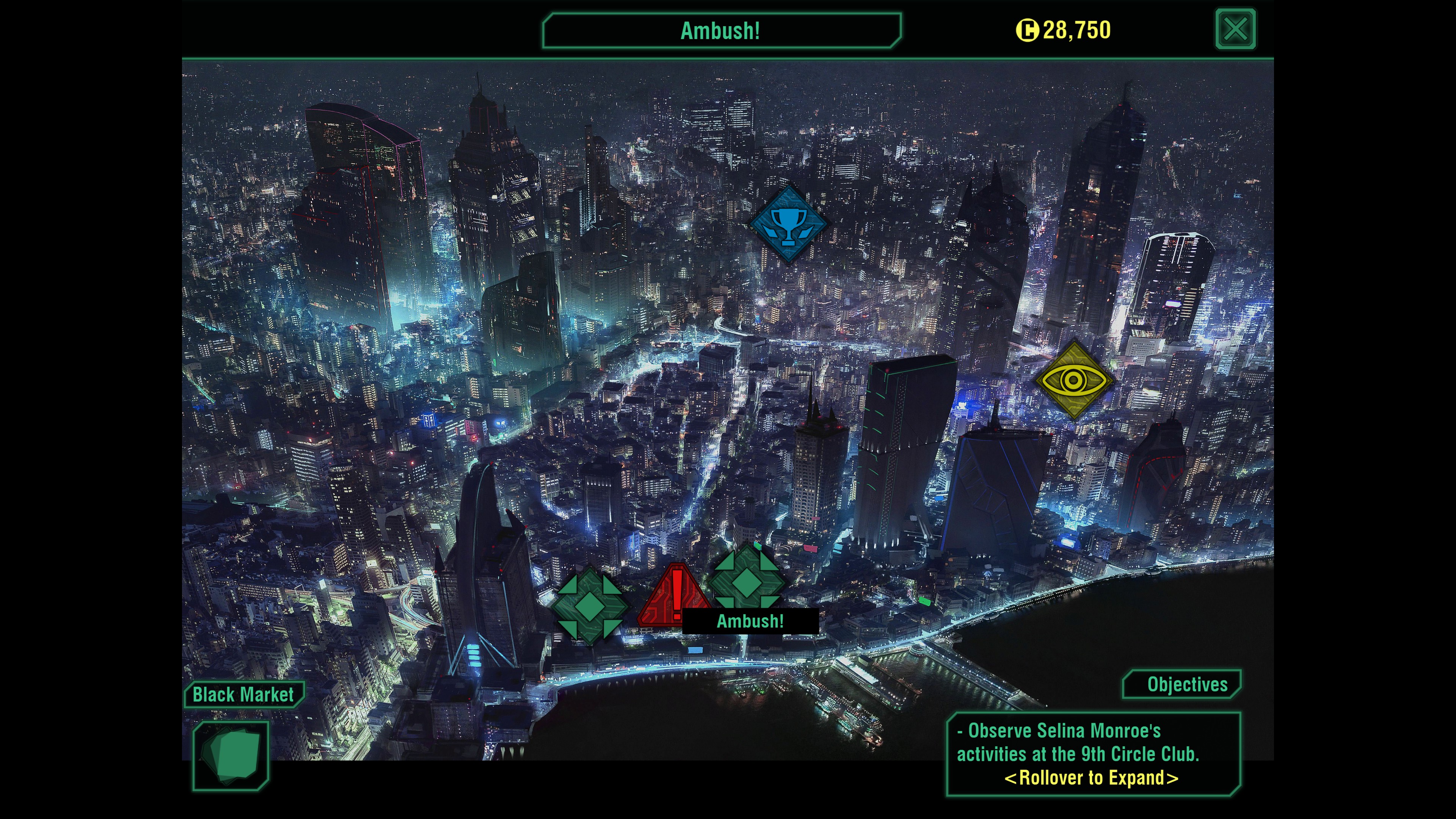 The card-based gameplay is also wrapped up in two campaigns (plus a third if you buy the Underworld DLC), each comprising a large number of story-based missions. The core card gameplay forms the combat sequences in each of these missions and is the only real interactive gameplay, but, apart from the odd grammatical error here and there, the writing is actually pretty good.

Battles are one on one. At the beginning you see your starting hand of six cards and can redraw it up to two times if you wish. If you don’t like the third hand, then bad luck; you’re stuck with it. (Actually you’re not; there’s no penalty for conceding the hand, so just concede and try again!)

Each turn you draw a new card from your deck and your credit pool maximum increases by one, up to ten, and is refilled. If you can’t draw a card when you have to, you lose. Each card has a cost in credits to play, which are subtracted from your current pool. Played cards are either instant effects; agents, of which you can have four active at any one time; timed support cards, of which you can have three active at any one time; or modifiers, of which each agent can have three good and three bad at any one time. Discarded or used-up cards go to your archive. 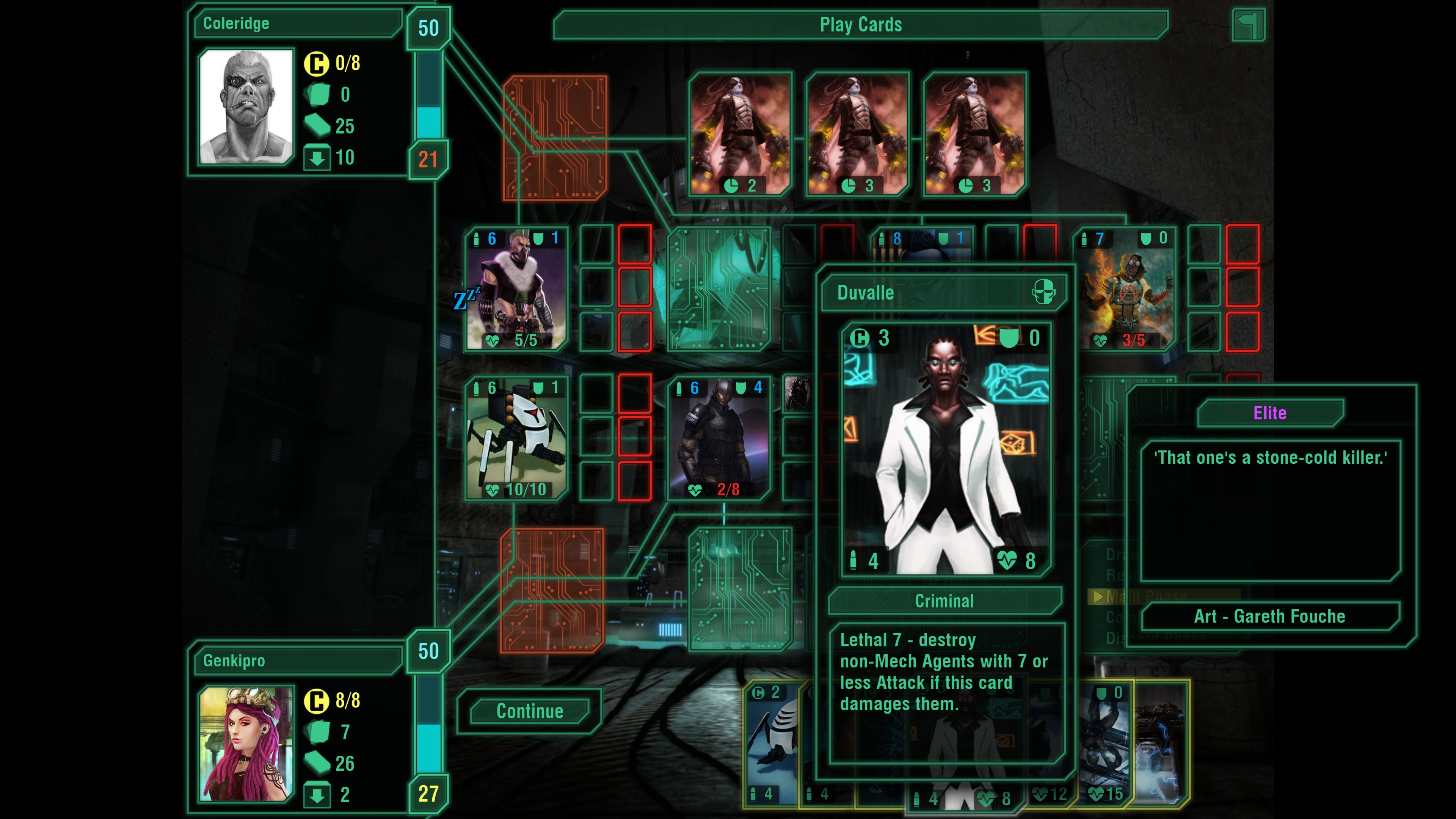 Agents have points in attack, health, and armour. Normal damage is reduced by armour, with the remainder being taken directly from health. When an agent’s health drops to zero or below, it is destroyed and the agent card and any modifiers attached to it move to their respective archives. They sometimes have special abilities, though these tend to be much simpler than some of the M:TG abilities: haste, armour piercing, extra damage from other cards, etc. Each agent can also be a member of one or more factions, and there are certain cards that only affect those agents.

You win a hand by filling up your Objective Point (OP) meter before your opponent does. OPs are gained through hacking-based cards and through unblocked attacks from agents.

And that’s basically it. The fun comes from the fairly large card variation and applying different tactics to the game to outwit your AI opponent. It really does only take a few minutes to learn the basics, especially if you’ve played a CCG before, and then you can dive in. 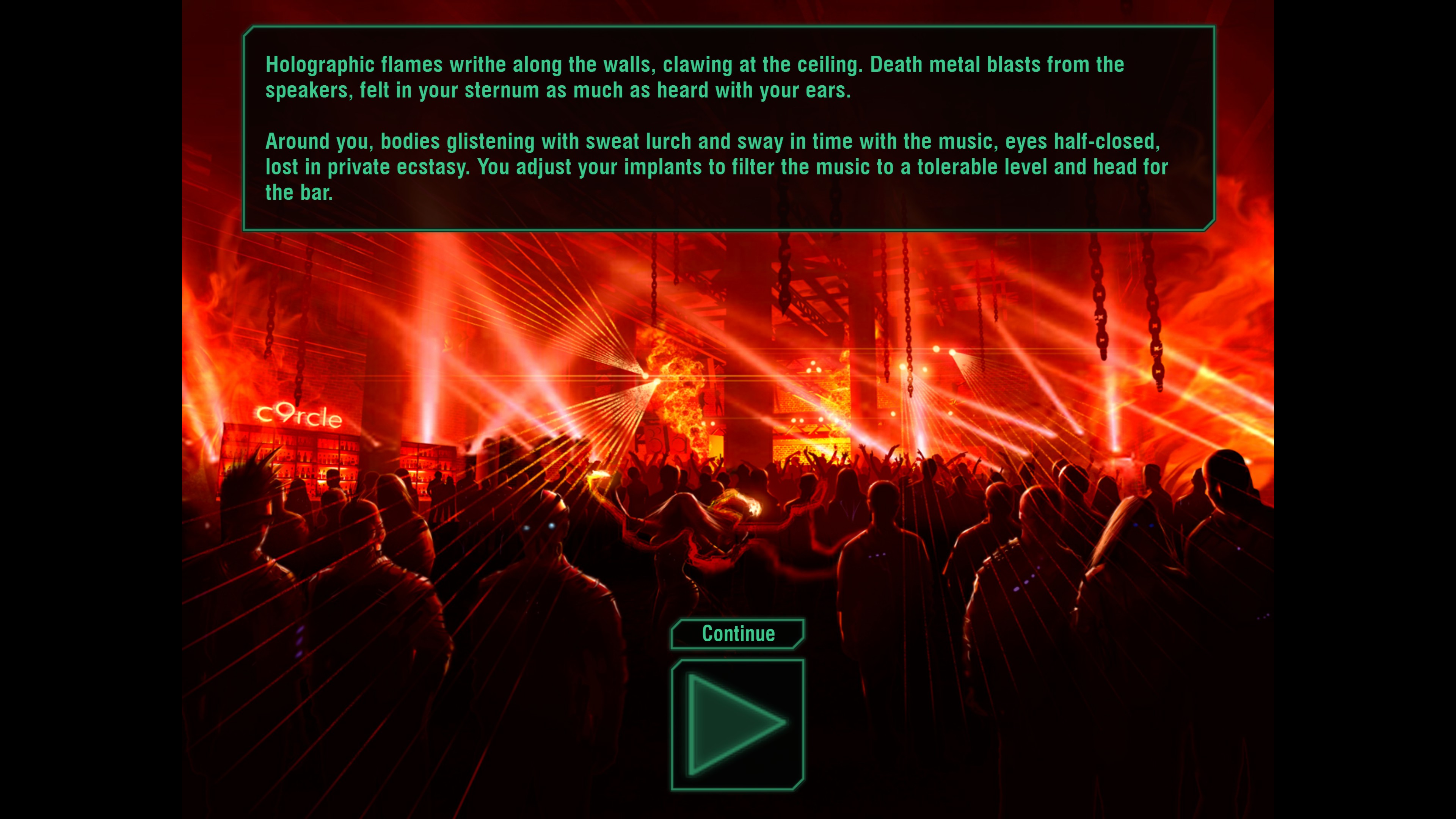 A big part of any deck-building game is the progression: how you change your wussy starting deck into something that makes you proud to wield it.

Some games play a sort of fast-and-loose style. In these you start with a standard deck, you gain cards as you progress, and you often pay some sort of currency to remove cards that you no longer want. Every card you own is in your deck at all times.

This is much more like a traditional CCG. You start with a deck, but you can modify it whenever you wish; the only real restriction is that it has at least 40 cards. You can even create multiple decks for different situations, with the excellent faction system making faction decks an obvious choice.

You gain credits as well as extra cards for your collection through completing missions and winning at the arena: a one-on-one area where you fight against opponents with decks chosen randomly from one of three difficulty levels. Cards can then be added or removed easily from your various decks using the straightforward deck editor, which also doubles as an interface to the black market. Here you can spend your credits on buying any of the game’s available cards, or selling extra copies of your own for a fraction of their value. 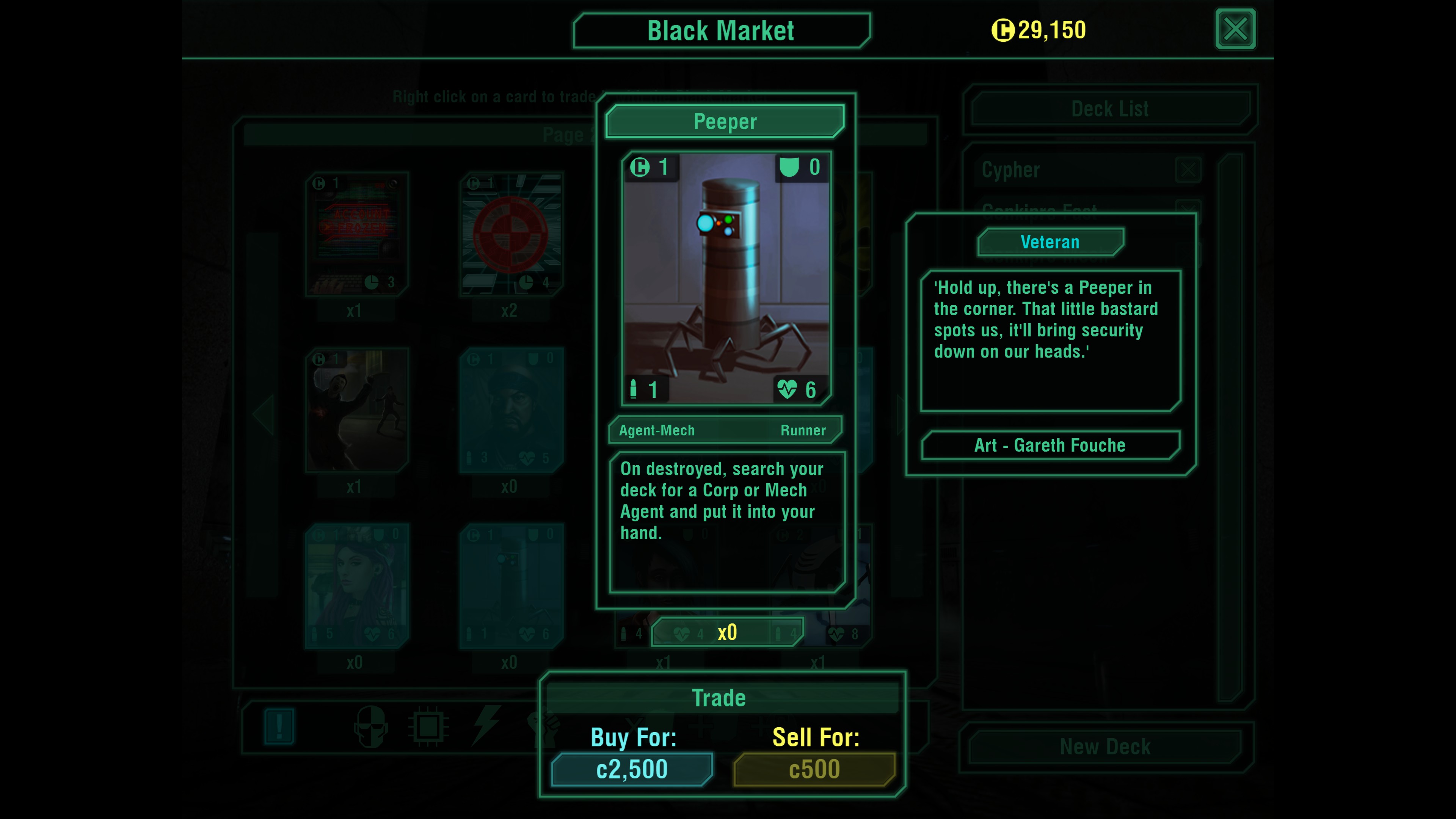 So it ends up being a sort of cross between a traditional CCG and a deck-builder, with cards earned from missions boosting your collection in deck-builder fashion, but with the credits, black market, and deck editor allowing the sort of freedom expected from a CCG.

The story and characters are interesting, too, if somewhat stereotypical of the genre. Combined with the gradual increase in credits and randomly rewarded cards as you play, this keeps the game feeling fresh for many hours, even when you’re fighting battle after battle and encountering many of the same cards. It’s a shame the dialogue choices are just for flavour; some in-game effects from different choices would have been nice. That said, it’s also nice that there are no penalties; you can say whatever you want and lose as many battles as you care to, and it won’t affect anything in the game. 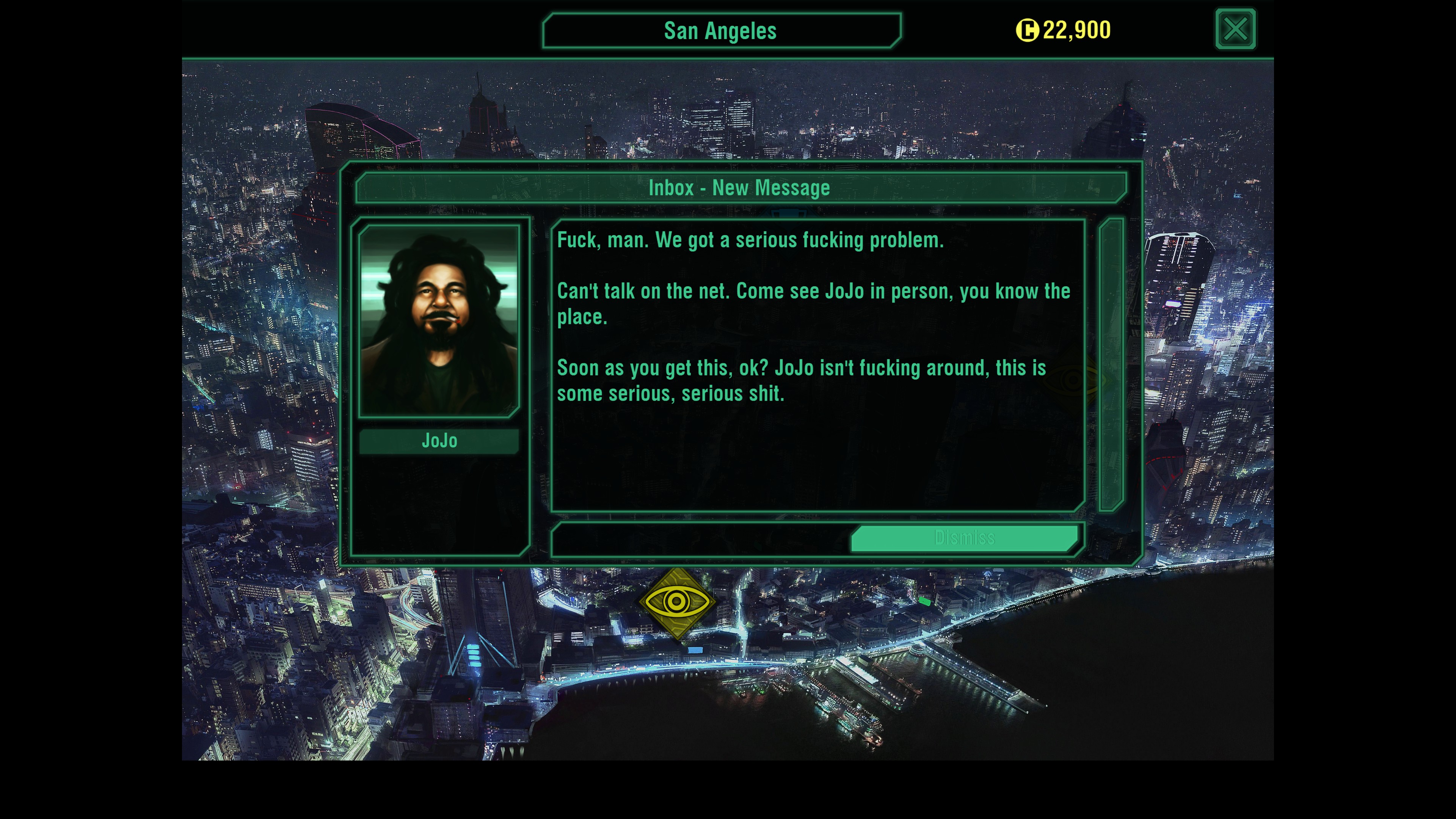 System Crash’s interface is very nice and clean, with plenty of simple animations showing the flow of damage, Objective Points, card modifiers, and the like. It makes it easy to grasp what’s going on and easy to jump back into if you have to step away for a moment. With one exception: for some crazy reason the cards show attack points at the bottom left in your hand, but at the top left in play! That single change has made me miscalculate countless times.

Background art is mostly very nice, though it’s repeated often throughout the game. Card art, too, is great; it’s from a few different artists, but the cards are presented consistently and fit in well with the rest of the game’s atmosphere. The tooltip response for showing the card details is spot on, too. Even the interface itself fits the theme well, with a clean neon green font used throughout, and matching line art for the interface sections. It all looks great even in 4K resolution.

Sound effects are mostly good, but some don’t quite fit. The shooting sound for most of the modifiers and some support cards is overused; I’d have preferred a bit more variation there. The soundtrack, though, is excellent, with some subtle tracks mixed with heavy beats in battles; it works really well. 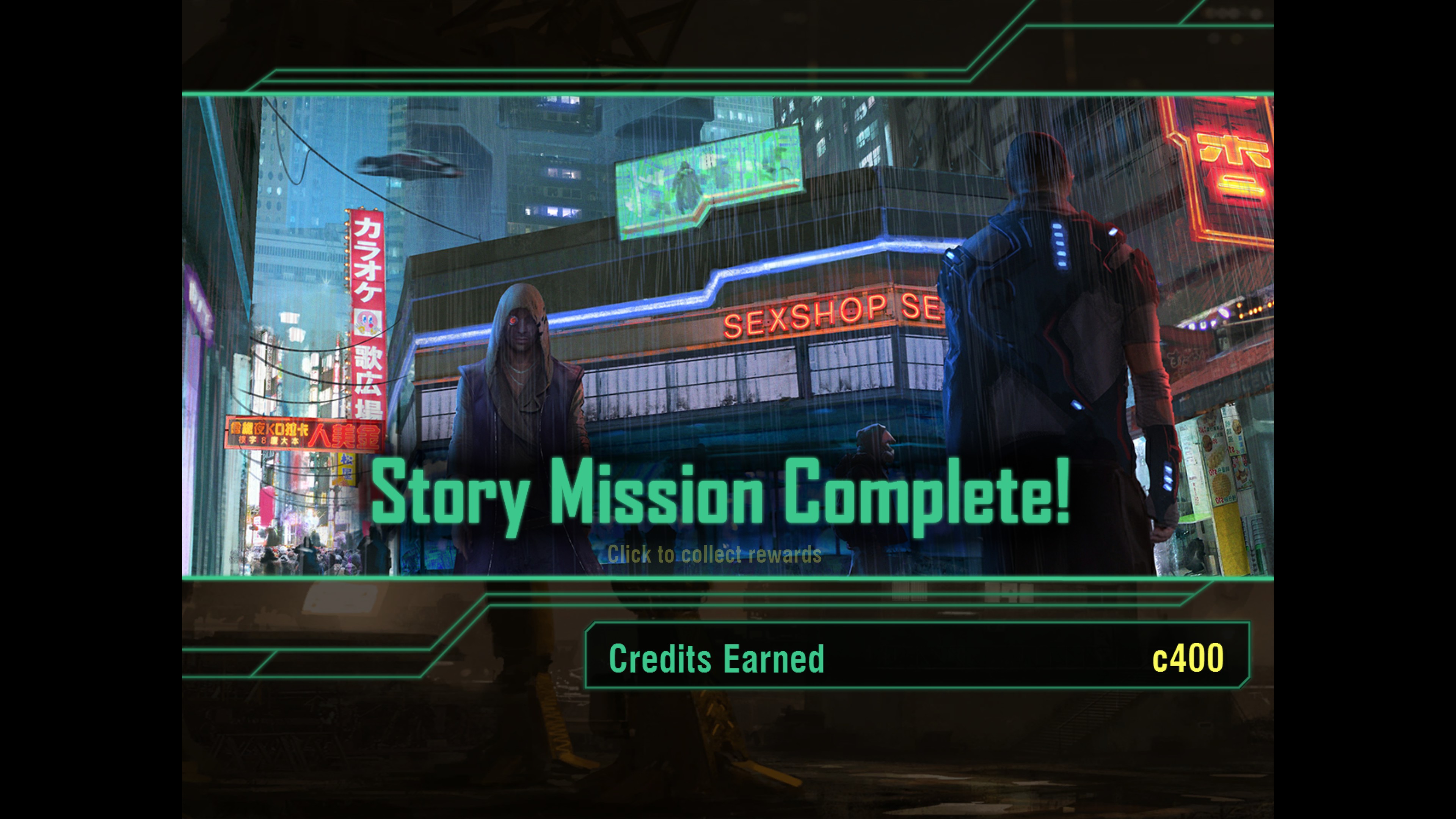 System Crash is highly enjoyable. It didn’t grab me as much as I thought it would a couple of years ago when I first played it, but in the last week or so I’ve lost 15 hours to it and I’ve barely noticed them fly by. There are enough cards and different tactics available that there are many ways to beat each mission and the deck editor and card progression make simply building new decks and trying them out fun, too. It does still have some grammatical errors and a few bugs, but none of them are too serious and they’ve had very little impact on my enjoyment.

If you’re a fan of CCGs and you think you’d like the cyberpunk setting, you should definitely give it a go!