Here Be Dragons has a satisfying dice-based combat system. Unfortunately, it lacks a fully fleshed game behind to fully back it up and offers only a set of disconnected puzzles.

Here Be Dragons is a battle/puzzle game. You face a series of turn-based battles, not unlike a JRPG like Final Fantasy or Pokémon, but with a completely unique dice-based combat system.

The combat system is very contrived, but it works very well once you get into the late game. It doesn’t let you build characters over a long game like the ones described above, however. There is a huge amount of mechanics and modifiers, changing in essentially every level. It can be tough to wrap your head around it, but it is satisfying if you approach each level as an isolated challenge.

Honestly, it’s almost impossible to summarize the mechanics. There are so many of them and so many modifiers that it quickly gets out of hand. I’ll attempt a brief overview here.
You have 2-3 ships and fight 2-5 enemies. Each turn goes as follows: one side picks one die per character, and then the other. The sum of the dice determines “initiative”, with the lowest sum acting first and choosing the dice first, next round. Then, each side attacks (based on attack and defense stats), and then each side executes actions.
You assign dice to actions or stats. Each one has a slot with allowable numbers with some effect. One character may have a 4-5 die slot to increase damage, and a 1-3 to increase defense. Actions are where it gets complicated. Some actions require only one die, others require several. You can only assign one die per character per turn.
The actions vary wildly, from simple healing and damage (ignoring stats) to taking die out of the opponents’ slots, forcing a certain die to appear on the next round, doing damage to all targets, poison, bleeding, seduction, etc. etc. etc.
There are also “ink bottles” for some extra abilities. You get one ink bottle per turn, and another per enemy killed. These are rather outside the main loop, but they are a crucial tactical component of the game.

I hope this is enough to give you a workable idea of the game’s mechanics – enough to understand the rest of the review, anyway. 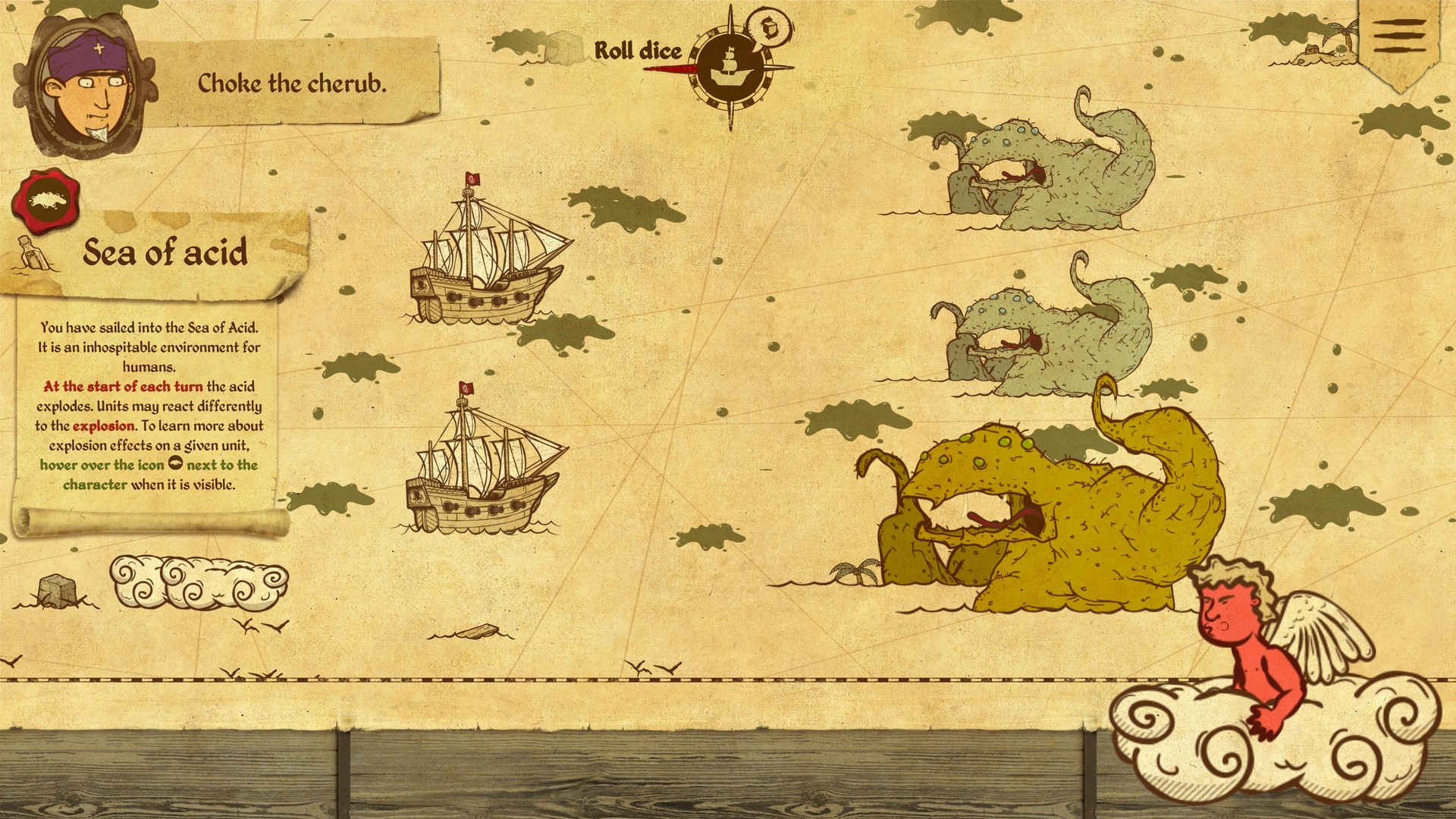 One of the most immediately striking aspects of the game is its aesthetic, centred on the visual style. It is clearly based on the discovery age maps (or, rather, the one map that apparently got a disproportionate amount of attention, the Hunt-Lenox globe)
as well as medieval bestiaries.

While the game looks unique, I feel like the cartoony style takes away from the aesthetic. There was another game, Ancient Trader, that used a similar visual style, but went for a more realistic and detailed approach, which is more appealing (to my tastes, anyway).

Still, it does its job and it’s catchy! There are some issue with the UI, but this is mostly in the early game where they don’t convey information very well – once you understand all the elements, it becomes smooth sailing. 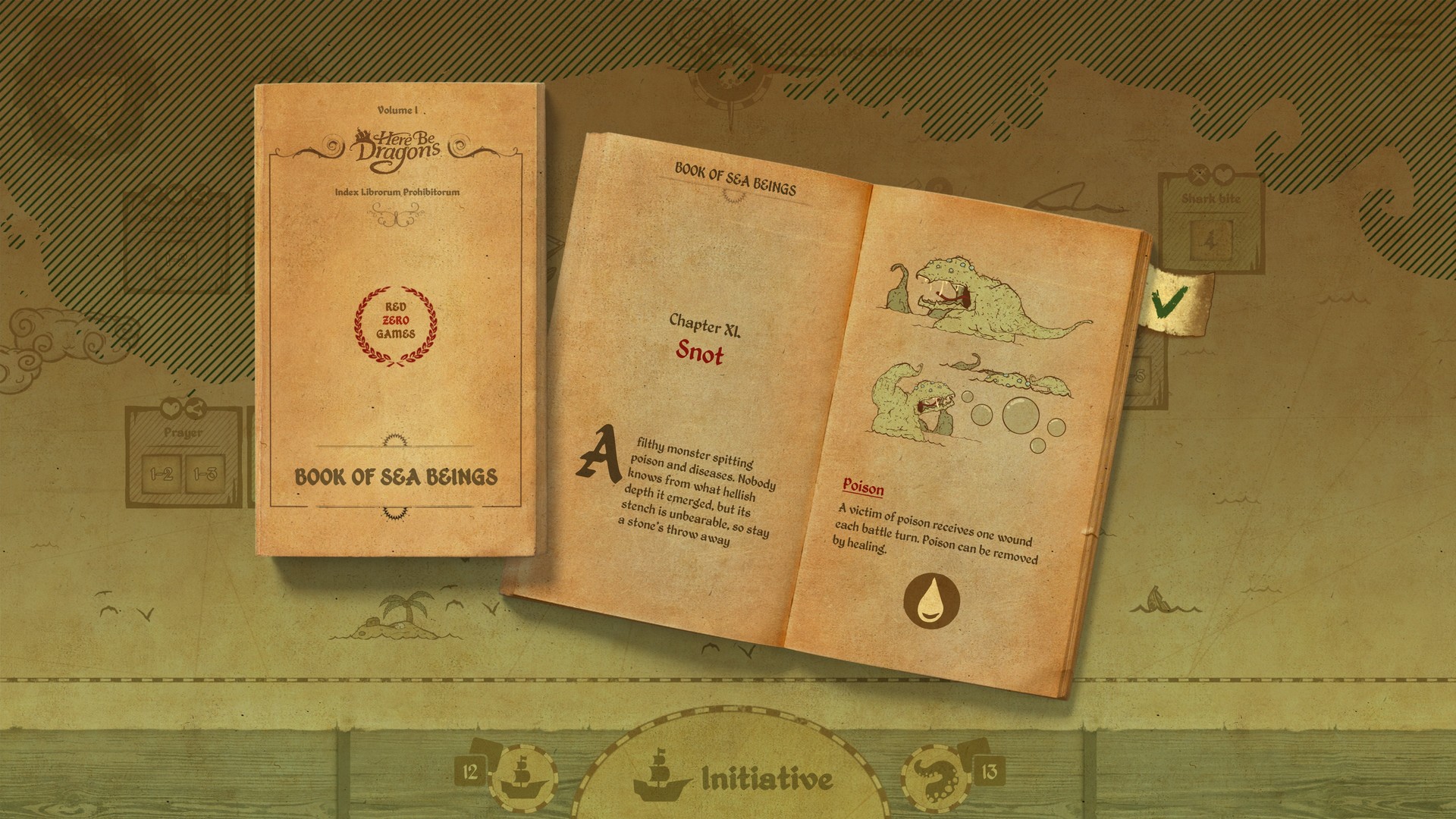 This is a combat game. Period. The game is all about the fights. The plot is there really to give you some variety in between battles, but that’s it. It relies mostly on stereotypical characters representing each ship you command, and then some contrived overarching plot that went completely over my head, for some reason. Perhaps it was the fact that the characters were simply flavored text with little or no meaning behind them. You have a parody of a Knight of the Round Table who is very doubting of everything, you have a robot that talks like a machine from the 60s, you have a crazy dude who says fish, and another that exclusively parodies songs by inserting nautical terms.
I like when the writing has humor, but use it sparingly! If everything is a joke – and often a bad one – people will probably start ignoring it. I know I did, and not intentionally so.

On the more technical side, some of the modifier descriptions were rather ambiguous, which was a big problem. Especially because every battle is practically unique and you constantly have to understand new rules on the fly.

Overall, I can’t say much about the writing. For some reason, it didn’t connect with me at all. I’ve seen people loving it, and I’ve seen others having the same reaction as I did. Seems hit-or-miss.

The game has 13 “campaigns”, which are essentially sets of levels. The first 12 have 3 levels each, while the last one has 4 levels. Your ships (stats and abilities) change drastically between campaigns, and sometimes between levels, too.

You will also get a small stat upgrade to choose from between levels (and isolated to the current campaign). This was a very weak design decision because you’re choosing an upgrade without knowing what you’re really facing next. And sometimes the challenge changes so completely that making a decision based on previous levels would turn out to be a very bad one indeed. The early campaigns were very short, so restarting wouldn’t be too punishing; the later ones, however, can take longer than an hour, which makes a restart due to a forced uninformed decision rather frustrating. Fortunately, I didn’t have to restart any campaign (although be ready to restart individual levels).

I suppose each campaign is built around a “theme” or a “mechanic” but my experience had a lot more variance to this than I expected. The levels didn’t really seem to build on a theme, but frequently changed direction completely, even if they kept a newly introduced enemy to loosely tie levels together.

This is about it, really. It’s very straightforward. The game is a series of levels. There isn’t any exploration, planning, etc.; each battle is an isolated puzzle, which leads me to the next point, the most important in this review. 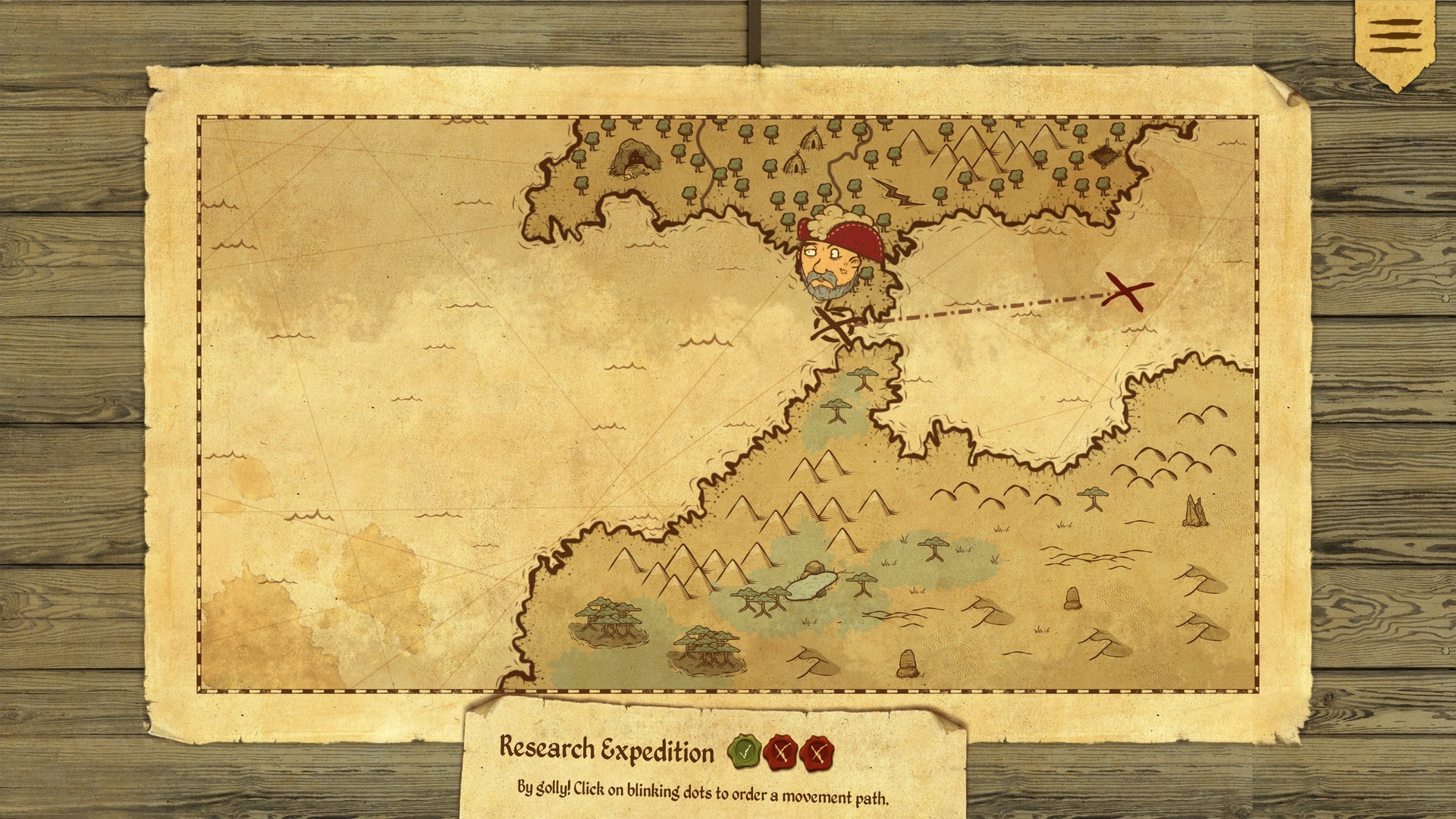 The game is advertised as “strategy” game, but this is extremely misleading. Strategy suggests a common set of tools with which you will have to learn how to solve a variety of problems. A typical RTS game has a constant set of buildings, and the campaign tests your skill in different ways – against rush strategies, holding positions, finding the best resource locations, and so on. The basic toolkit is the same throughout.

This game is not that. The toolkit is rarely constant. Your ships’ abilities change so much and so deeply that you’ll approach each battle/level as a completely self-contained challenge. Most of the levels also seemed to be very difficult, until you figured out the one trick to exploit. It’s a puzzle game, not a strategy game.

That is not to say it is a bad game! Although I was constantly treading the line between frustration and elation, I found most of the battles very satisfying. Well, maybe not most, but the memorable ones! When the game works, it works really well! Just be mindful of the distinction: this is not about reacting and slightly readjusting strategies on the fly; it’s about looking at each battle individually, how the enemies interact, how your own abilities interact, and find the trick to solve the level.

This is a dice-based game. And I claim it is a puzzle game. These two don’t seem to go well together (especially on a mechanical rather than puzzle design level), right?

Well, yeah. Kind of. Think of it as a statistical puzzle. Even if you find the solution, you’re not guaranteed to win every time. And sometimes you will win even without a very solid solution. This is a very tricky aspect of the game and I am not sure how I feel about it.

In the early-mid game I felt like I was restarting a lot until I got sufficiently good rolls – and I felt like I NEEDED to do so, not cheating. Later on I think the variance decreased. The levels got a lot harder, but you had a lot more controls over multiple turns (by cancelling your opponents attacks and healing yourself).

I am not against using randomness in these kinds of game. I think there is a legitimate skill in randomized games, even if you’re only able to win “on average”. Rogue-lites are a great example, where you don’t really expect to win every time, but you learn how to manipulate the random variables to win most of the time.

One problem with this is that rogue-lites have a much longer loop than Here Be Dragons. The longer the loop, the lesser the effect of variance. You have a higher chance of making comebacks. With such short levels/battles, it is very easy to be completely screwed over by one or two bad dice rolls – or to benefit from them!

Overall, I don’t think the game is very elegant in this respect, but I don’t think it is terrible, either. It was an interesting and different kind of challenge, which I certainly appreciate! But it feels like an unsolved design problem, to me. 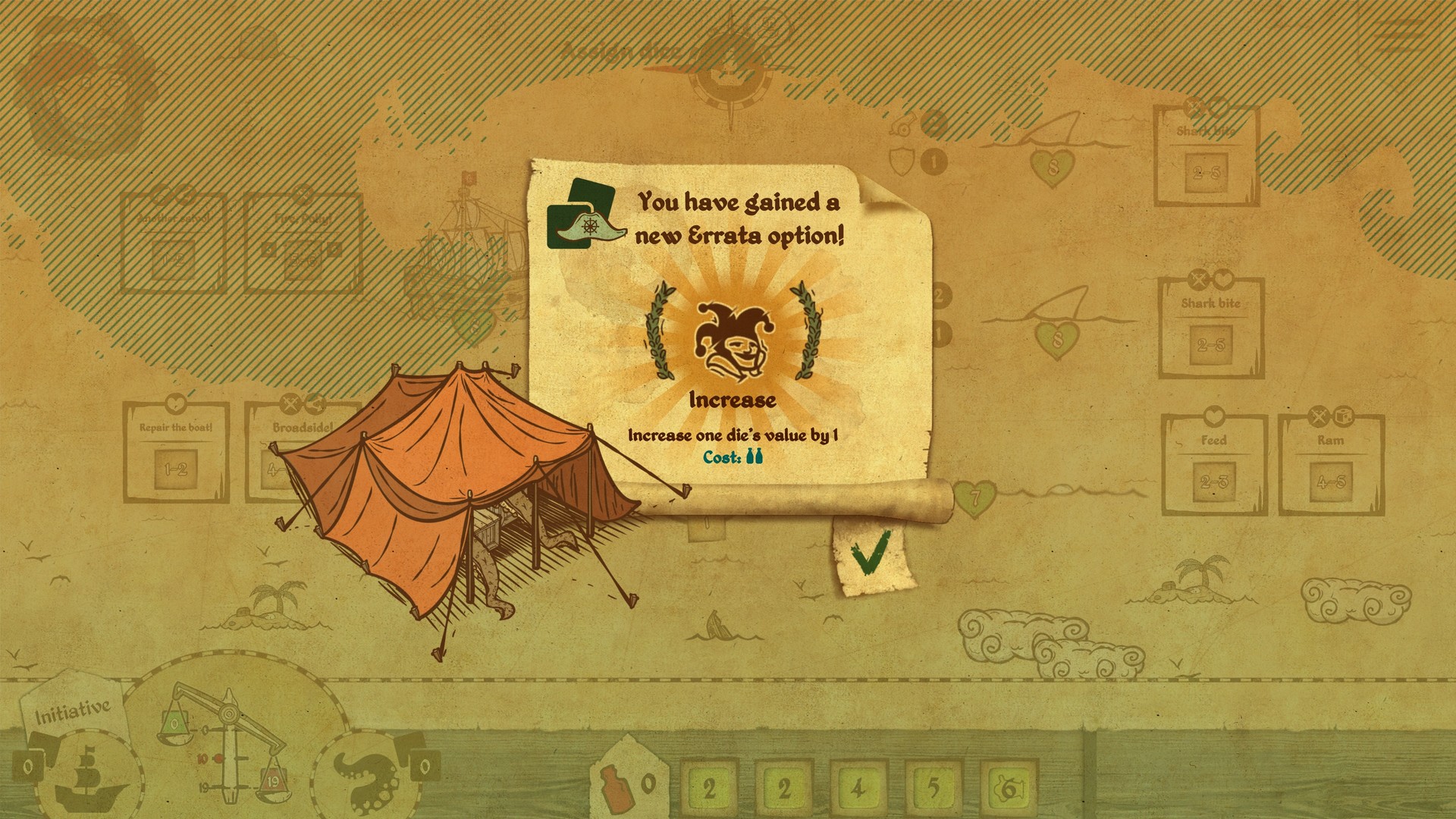 I think the above sums up my feelings about the game.

This is not a perfect game, nor one that will change your world.

The combat system is very contrived, and since each battle relies on completely different mechanics, it’s almost impossible to see a sequel or a long-form game of this kind, with a progression and so on. I believe it’s a one-off.

That said, if you know what to expect, the game can be surprisingly satisfying! I was always on the verge of frustration, but that’s not always bad, especially when said frustrating didn’t materialize but dissipated upon a successful battle!

If you like individual puzzles (not something like The Witness which is a constant progression and build-up on previous mechanics) and accept randomness, you can give this a shot.