One of my all time favorite games is VA-11 Hall-A and ever since, I’ve been on the lookout for similar games ever since to scratch that itch it left behind. The closest I’ve gotten was playing The Red Strings Club which does have you literally pouring drinks to bring out certain emotions in your customers, but it turned out to be disappointing (for me at least). When I heard about Coffee Talk though, I knew I was going to pick this one up and play it as soon as I could. My decision was hammered home even more after I played the demo. Well, now that Coffee Talk is released how does it fare? 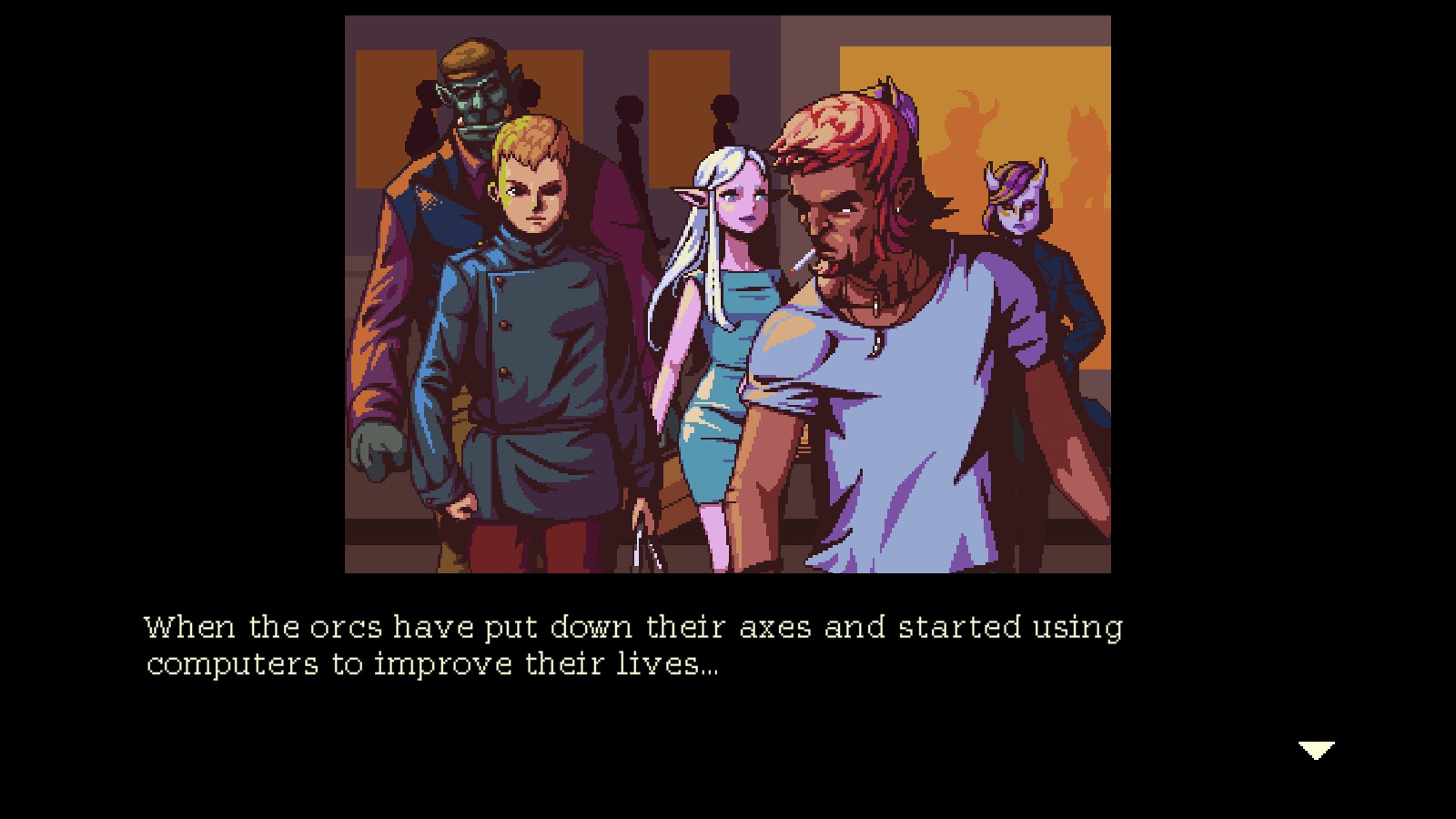 Taking place in Seattle in an alternate 2020, you find yourself in a world that hosts not only humans but fantasy creatures like mermaids and elves. Though, that doesn’t mean this world doesn’t have it’s own set of problems. That is where you come in as the owner, and only employee, of a small coffee shop named Coffee Talk. What sets yours out from all the others is that yours is the only one that is open only at night. Ready for anyone to come in looking for a hot drink and an ear to air out all their frustrations.

Coffee Talk’s cast of characters are wonderful as each bring in their own unique personality to the table and stories on what’s currently happening in their lives. Each one manages to interesting to where most players will want to hear more about them and hope that they’ll come in before you close up. You’ll start out with Freya, a regular that always comes in to write and is aspiring to have a book published. It’s not long before you meet up with an elf and succubus couple that’s struggling with their families not approving their relationship and what the future holds if they never do; a cop that’s totally not taking too many breaks to have a cup of your coffee; a vampire model that gives insight on and to whoever happens to be there; a werewolf that’s trying to find a drink that will calm him down during his Fury; and more. You also have some other world-building elements through daily newspapers (headlines only sadly), Tomodachill profiles that opens up more information as you get closer to the characters, and you’re even able to read some of Freya’s short stories to give you a taste on how she writes. 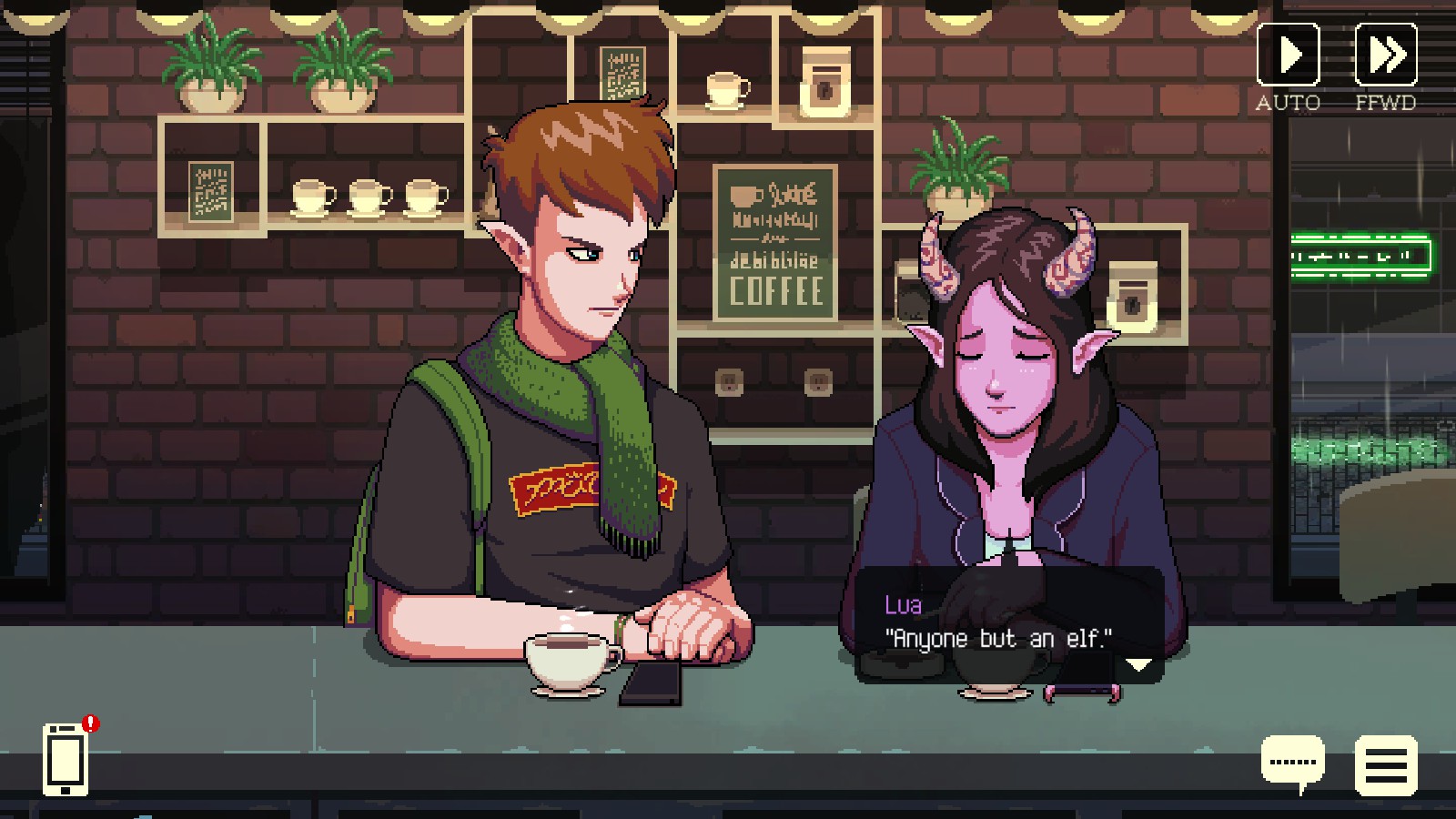 Brewing up drinks for your customers is pretty simple. At first, you’ll only have a couple of ingredients, but you’ll slowly get more as inventory comes in. You’ll pick a base, a primary ingredient, and finally a secondary ingredient. While you’ll brew the usual drinks like espressos, lattes, and flavoured milk, there are also special named drinks you can discover and customers will occasionally request. However, you won’t have the full list, only having the basics already in your Brewpad, as you’re meant to discover them yourself. As some customers will request named drinks, with some giving hints and others not, it also means you most likely won’t be able to give everyone correct drinks. Luckily, Coffee Talk doesn’t change anything other than them saying it’s not what they ordered apart from two instances. These two instances are telegraphed so it’s not hidden away if you’re worried about that.

For lattes, Coffee Talk also lets you create your own latte art if you wanted to. I personally found it hard to make anything, well, pleasing. Basically the longer you hold own, the more milk will be poured and it’ll be pushed down. If you don’t like it when you try it out, you can completely ignore it.

Coffee Talk also features an Endless mode with two different choices. First, you have Free Brew which lets you make anything. This is mainly used to let you figure out all named drink combinations as you won’t be able to make all of them in your first playthrough or be able to figure it out if you’re not given any hints. Then there’s Challenge Mode. Challenge Mode, well, challenges you to make as many correct drinks as you can for your customer before the time runs out. Each correct drink adds on more time so you can survive longer. It starts out pretty easy with them just saying what ingredients they want outright. It slowly brings up the difficulty as it brings your base to the end of their request and occasionally requesting a named drink (that you hopefully discovered before now). Lastly, it gets more vague on what ingredients they want, but more specific on how they want sweet, warm, cool, or bitter they want their drink to be. This is where it gets challenging as it first starts with only requesting one aspect to be a certain way to all of them. Though, this part is a bit confusing at first before you figure out what the customer actually means. Asking for a drink that’s not bitter and extra sweet is obvious, but what about less and just regular sweet. Especially when they just plainly say “I want my drink to be bitter” and they hate it when you just load it up. Well, you might not have noticed, but the coffee maker actually tells you what constitutes as a drink having a low or high amount in each. 1-3 bars is less, 4-5 is just right, and 6+ is extra. When the game asks for a normal amount of one of them, it will only accept 4-5 as anything more counts as it being too much. 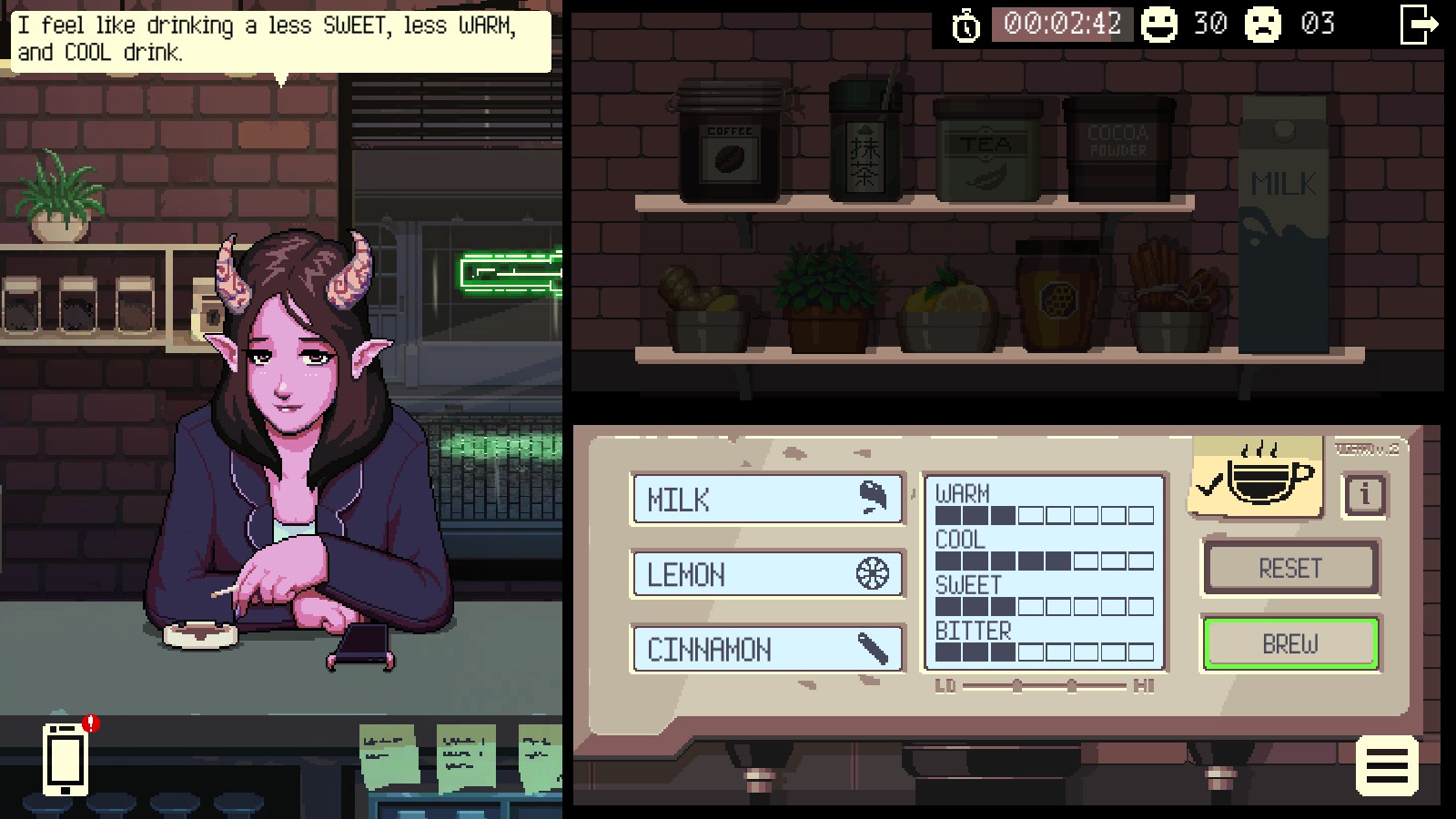 When you think of a game centering around being a barista, I would be surprised if the first thing on your mind wasn’t a cozy coffee shop where you can go and study or write. Coffee Talk certainly doesn’t disappoint if you’re expecting a cozy atmosphere. The coffee shop just shouts cozy vibes with how it’s decorated, the characters are wonderfully designed and brings in a pop of vividity, the soundtrack is relaxing and I could easily see them being in a “relaxing cafe music for studying” playlist, and the rain certainly brings in another addition for those that find rain relaxing.

This game definitely reminds me of a 10-hour rainy mood loop of Beneath the Mask that I listen to sometimes while I write so I’m not writing in complete silence. Combining a relaxing soundtrack with the sound of rain pouring down outside and the image of you just sitting in a coffee shop watching people walk and drive by the window.

One thing I do wish was that Coffee Shop was a bit longer. Not because the price doesn’t fit, which I do think it does, but it felt like there could have been more interactions between the characters. While these things didn’t bother me much, others might be disappointed that giving wrong drink orders doesn’t really affect anything outside two separate instances and it doesn’t show the complexity of brewing coffee. The latter is a shame as I would have been interested in learning about it, especially since I even looked up how baristas make latte art in an effort to understand how the latte art minigame worked. 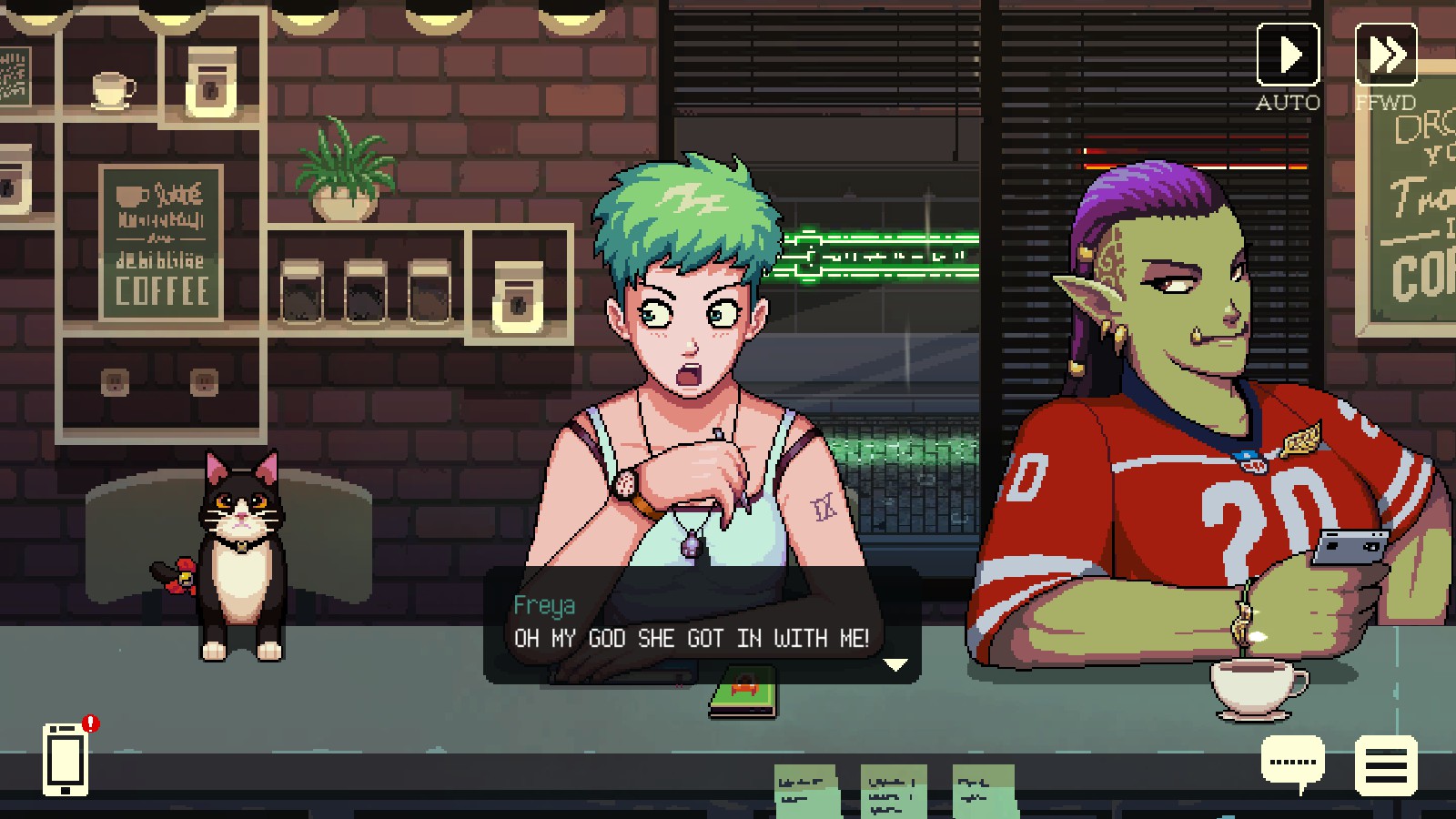 While Coffee Talk might not completely scratch that itch that VA-11 Hall-A left in many of it’s players, it will satisfy those that have been looking for similar games. While it can disappoint in some areas, it gives players a wonderful cast of characters, a cozy atmosphere to relax to, two endings, and a challenge mode for those who are looking for a challenge.