AstronTycoon2: Ritual tries to make a city-builder out of an interesting time period, but fails in abstracting the mechanics too much and streamlining the gameplay to the point of removing the room for any decision by player.

AstronTycoon2: Ritual is a city-building game set in prehistoric Europe, specifically during the megalithic period.

You build a city to support the shamans who perform rituals near megalithic stone moments to satisfy pilgrims and gain ever more fame.

Unfortunately, while the game isn’t terrible, I feel like it doesn’t succeed either in conveying the time-period and society it tries to depict or in providing a compelling game.
This will be a comparatively short review, as I’ll only mention the main aspects where it fails – first, how the mechanics are abstracted to the point of meaninglessness (so that even if the game was (pre)historically accurate,
it wouldn’t connect to most players in a useful way), and second how the gameplay systems are simplified to the point of the game becoming more like a “clicker” than a “city-builder”. 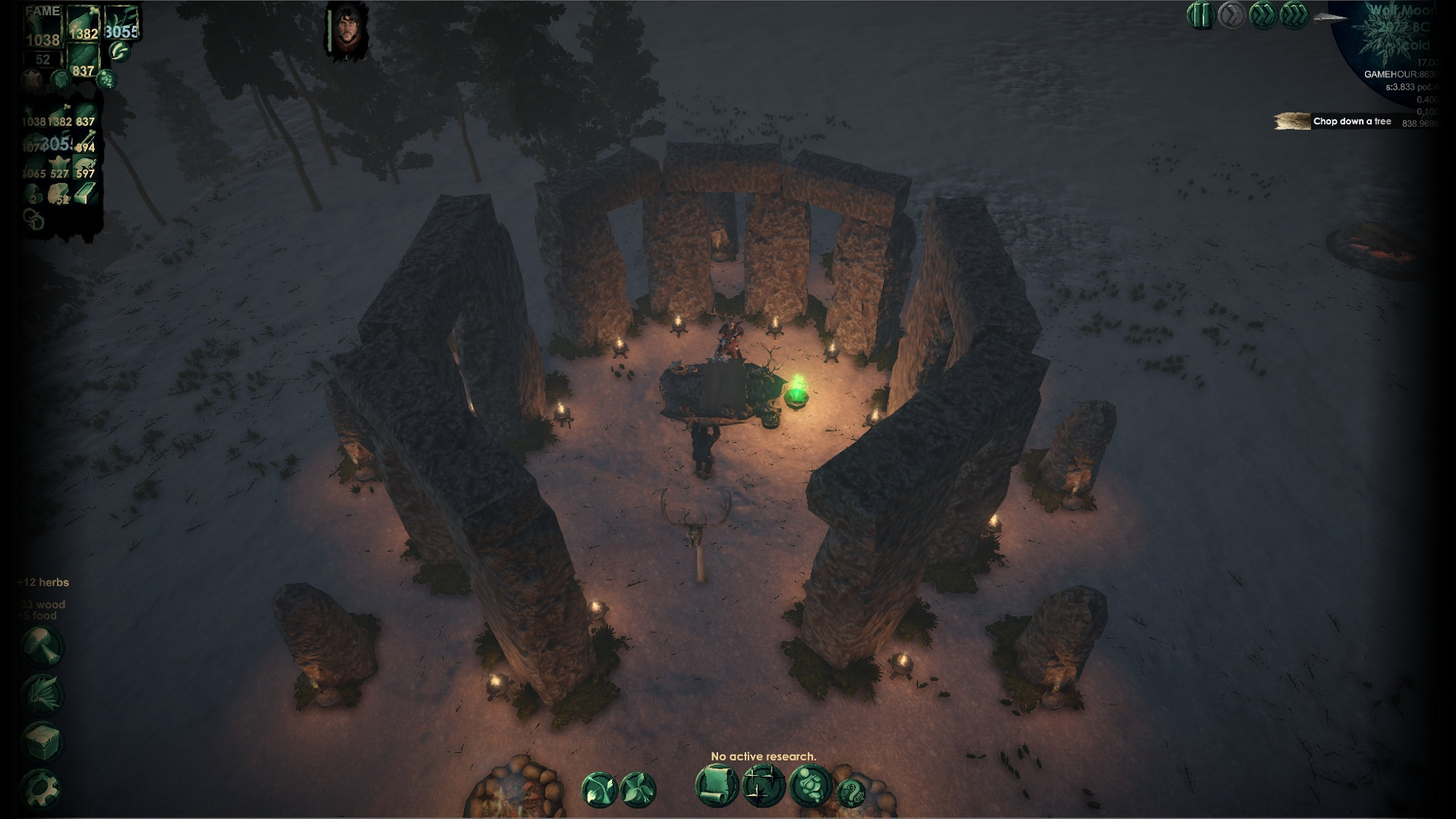 The game looks okay, for the most part. It’s not amazing, but not terrible. The biggest problem is how foggy and dark the game is most of the time, which looks both ugly and hard to parse.
Especially when you want to micromanage (which I had to do a lot before I understood the “path” to success), it makes it very hard to identify trees, herbs and rocks for you to click on.

Other than that, the game can look pretty good, at times! The sunrise looked especially good with its “light shafts” and warm colors!

You start the game with a shaman, his hut and his altar. Pilgrims will arrive at your village to get rituals performed, in exchange for resources (which are random). Occasionally, traders also arrive. Each resource has a “canonical
value”, and you can also use “fame” as currency. There is no bartering – you must offer as much as the trader to succeed.

Beyond this, you can build other huts – for a herbalist, a lumberjack, a stonecutter, a hunter, a jeweller, and so on and so on. One important (and I think bad) aspect of the game is that you can only have one of each specialist.
This means that the only decision you get to make is the order in which you build the huts.
Each hut consumes wood. Rituals consume herbs. People also consume food. All other resources are there to build more huts, trade, or upgrade some of the huts.

Rituals earn you fame. You need fame to summon specialists and their wives. You also use fame to build the megalithic monuments which earn you more fame per ritual performed.

There is a research tree with three separate areas. Each area requires a different priest (but you can only research in one area at any one time, which makes little sense to me?).
There are also different types of rituals, each requiring a different shaman, different altar, and different monuments (each uses a different kind of stone). To build monuments, you need fame, exclusively. It’s a sink for fame.

Men are specialists. Women and children are not, gathering whatever stuff they can find. You can change the ratio of resources they look for.
Villagers have some stats that were largely irrelevant in my experience – health, sleep, cold, enterntainment, skill, and so on. I never had to consider any of it, really. To my understanding, they recover some of their stats sleeping
in the hut or using some other buildings you can have. Upgrading the hut will “restore” stats like cold and sleep more quickly, but they’re largely a resource sink.

Villagers also have “tattoos”, which are basically stat upgrades. One makes the villager work faster, require less sleep, enterntainment, or whatever. Each villager can have every tattoo. You buy these tattoos with fame for each
individual villager. It’s another sink for fame. 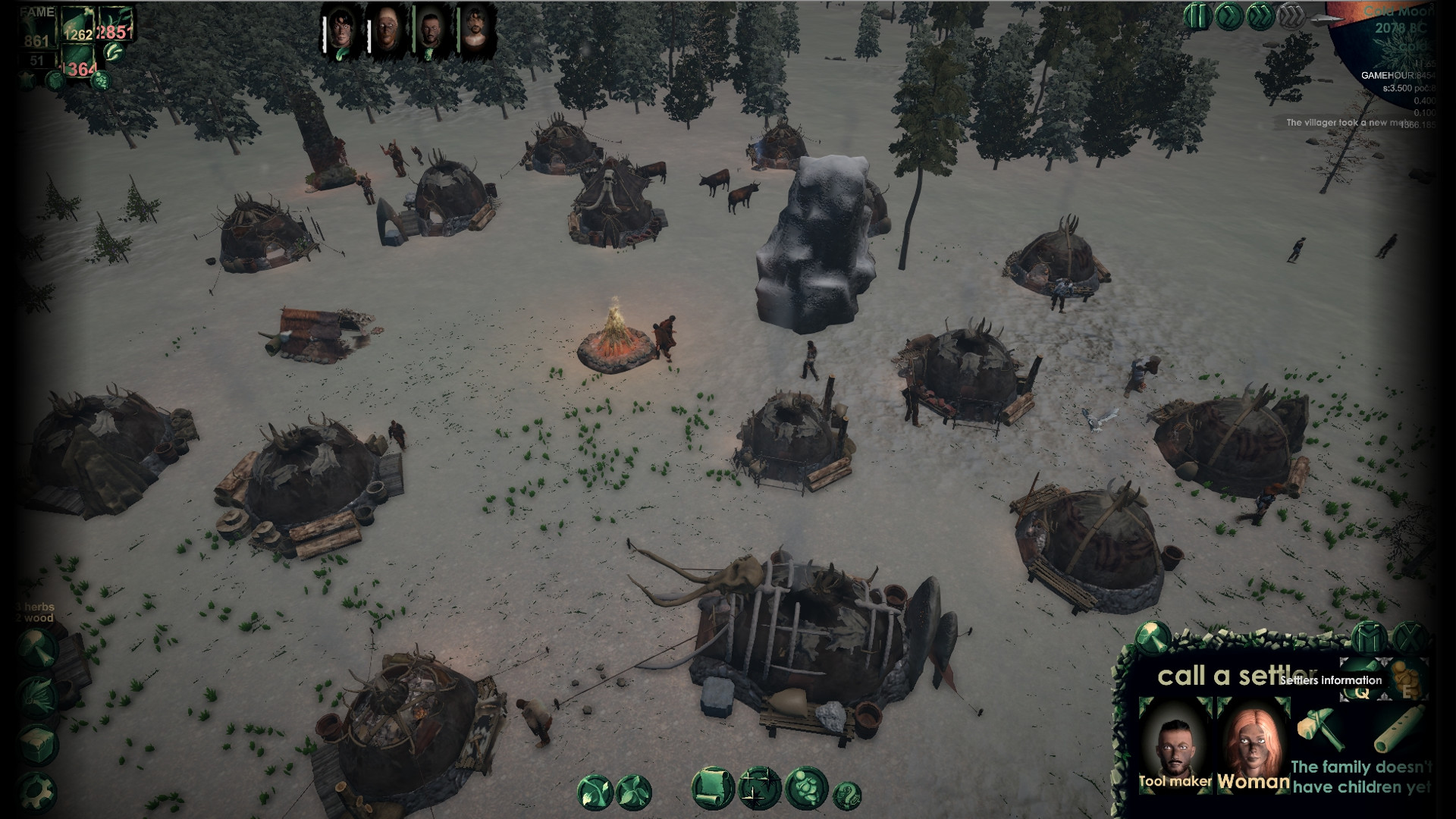 One of the things I like the most about historical and city-building games is that, allowing for some distortion, they can be really effectively at showing you a different society. Beyond superficial things like art, clothing
and architecture, some games manage to convey a “world system”. The best example of this, to me, are the Paradox Games, like Europa Universalis III forcing you to create marriage alliances, causing population unrest with heavy
taxing and war, and the need for a “casus belli” requiring you to either forge claims to some other territory or use various legitimacy claims.

One important aspect to note is that I don’t think there is need for historical accuracy, necessarily. I think games are powerful in conveying a system, and that system can be purely imagined. Whichever rules you start with, they
will create a whole world.

To do this, however, the mechanics must be deeply related to the imaginary rules and social customs you’re trying to convey. And this is where AstronTycoon2 fails in a big way. Above all, the game is too abstract, and the only
wordly context is given through flavor text which is in no way tied to the actual mechanics. You don’t need to think about anything to play the game – all you need to think is about numbers.

To illustrate this, consider astronomy and the seasons. It’s clearly one of the central aspects of many prehistoric civilizations or tribes, including the megalithic ones. The only way the game reflects this is in the flavor
text on the skill tree. “Researching” is studying the moon, the stars, or the sun. But you never have to think about any of it. The sky doesn’t really exist. All you have is a generic priest for each area, and a text describing
the research to be done.

Another aspect is the stone used in the monuments. Each kind of “shaman” has the same kinds of monuments, but each uses a different kind of stone. I don’t think this is historically accurate at all, but that is beside the point.
The more important aspect is that you don’t actually gather any stone. You click a button that selects a different kind of stone, and the price is only fame. The game even has stone cutters, but they use generic stones entirely
unrelated to the monuments! Those stones are only for buildings and tools. One extremely important aspect in prehistory was trade, especially for raw materials and luxury items like crafted jewelry. The game could have used a
similar mechanism to acquire these different kinds of stone (which are unlikely to be found in the same place) but it does nothing of the sort.

The overall point is that you don’t really need to think about the mechanics in any deep way. You have fame as the generic currency, and you use it to get more fame and upgrade villagers. The other resources like stone, wood,
and so on, you will get with whatever specialist matches that resource, with some contribution by the women and children.
You never need to think about what the villagers are thinking (well, would have thought) or the kind of society they live in. 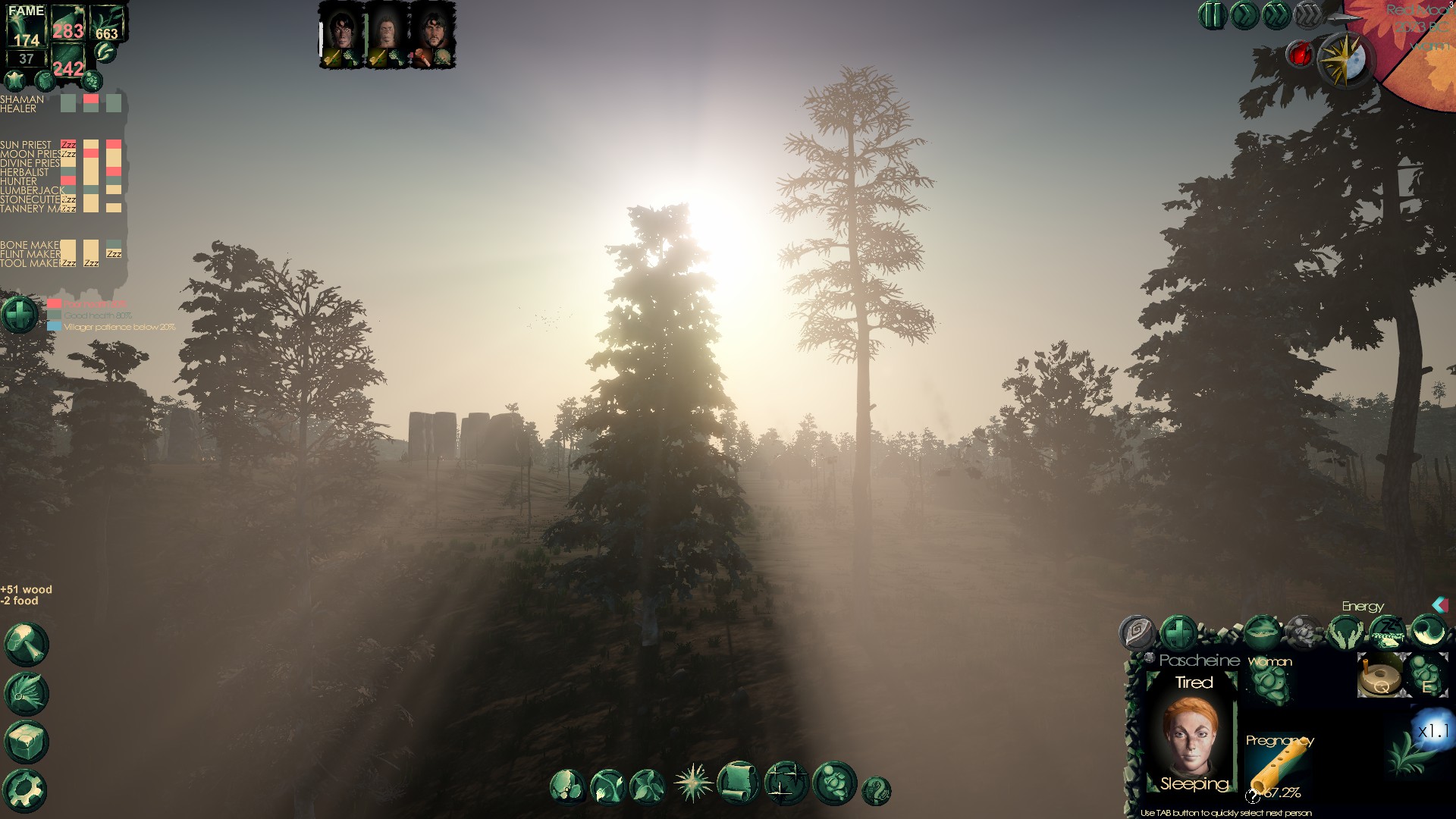 This is the biggest problem with the gameplay.

The existence of a single specialist means that you have very little control over the kinds of things your village produces. Need more herbs? Well, you can’t hire another herbalist. The most you can do is upgrade him more or,
in this case, direct the women to gather more herbs than, say, food.

In particular, the “direction” of your village is always the same. Every level will be exactly the same, with you building one specialist at a time until you have all the specialists. Even specialist order is mostly fixed,
since you need to research specialists to be able to build their huts, and you’ll research the cheaper ones first.

Think about a game like Anno 1404. That game was much more interesting because (1) there were shared resources, (2) each produce required different resources, (3) each resource had different requirements. For example, Books needed
paper and indigo. Paper required lumber, which required a lumberjack. Indigo required an Indigo farm, which only worked on Oriental Islands. Indigo was also used to build Carpets, required to sustain the nobles. The whole game
was built out of these small loops that interacted and made the game interesting. You would produce more lumberjacks as needed, and you could use surplus for trade, and so on. Different islands also had different resources,
and in some scenarios you would need to rely on trade to get them.

AstronTycoon has none of that. Furthermore, because the game relies on the “single specialist” paradigm, it must be balanced around it, which means that your village is almost always stable. The only gauge of success is how
long you have to wait for some resource. In the early game, especially, Bone was very scarce and needed to build just about everything. The only option was to tell children to collect exclusively bone and then wait until they
had found enough. In the late game, too, I simply let the game idle for a couple of hours until I had enough fame to get the last achievements.

The chronic stability of the population makes this a “clicker” game. All you really do is spend resources to acquire more resources until you have built every kind of hut and researched everything. There was never any risk of
death (although there were some untimely events that required the wrong kind of shaman or whatever) and it boiled down to a waiting game. 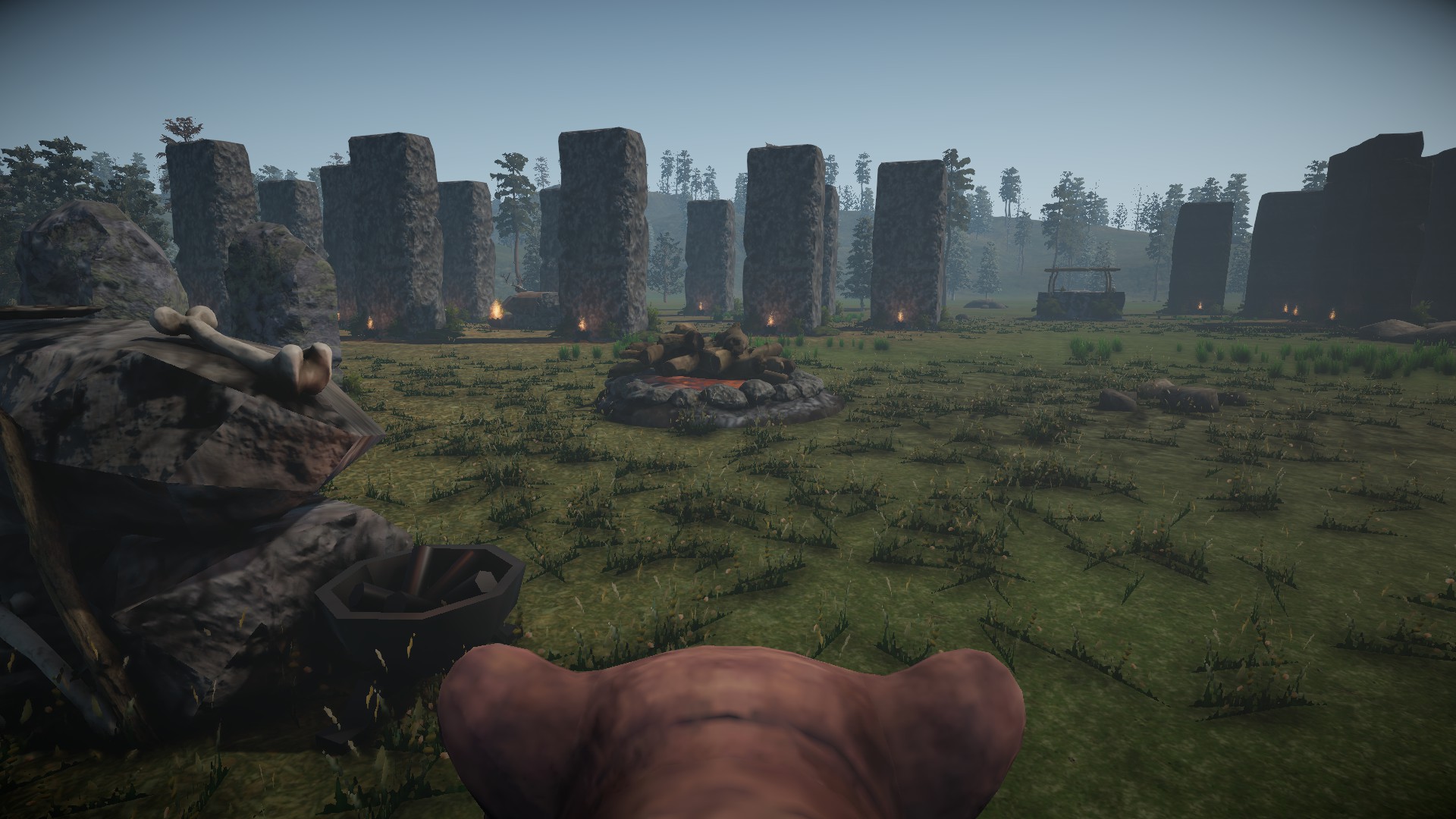 There are other aspects I could write about, but I suppose this suffices.

The game isn’t terrible. The UI is wonky and the mechanics are often opaque – while it has a helpful “help” section, it is lacking in many of the finer details.

I think the game would have benefitted from a smaller loops, smaller maps/level which explored a different aspect of the world and mechanics. As is, I unlocked every (working) achievement on the first map and the other maps seemed
largely the same. There isn’t any room for variation across levels.

The developer is active in the Steam forums, which is a good thing! So the game may improve, although I find my two major criticisms to be too deep in the game for any change there. Hopefully their next game will be better.

If you enjoy city-building games in a casual way, you can’t probably get some enjoyment out of this. If you’re looking for something deep, I’d say “look elsewhere”.