Coteries of New York is a great visual novel filled with vampire myth/lore, secret societies, and a great cast of characters.

Vampire: The Masquerade – Coteries of New York is a visual novel set within the World of Darkness universe. It’s the first video game in the Vampire: The Masquerade setting since the release of the original Bloodlines RPG back in 2004. The visual novel acts as a side story and takes place on the opposite side of the country, in New York City, instead of Seattle like in Bloodlines. If I’ve caught your attention, read on to find out more about the game.

Coteries of New York puts you in the role of a newly sired vampire who must learn to adapt to their new life as a vampire and to make a name for themselves in the world.

This is only a simple explanation of the story. The game goes much, much deeper than this, starting with the fledgling vampire learning of their newfound powers, their weaknesses, how to hunt/feed and many other things. The teaching stage takes a few hours to get through but if you love vampire lore as much as I do, this was all quite entertaining to read through. If not, then this section will bore you quite a bit.

As you might have guessed, the story starts off quite slow. If you don’t find the first hour or so interesting, chances are high that you probably won’t like the rest of the game either. That said, the game does get a lot more interesting the moment you’re able to start doing side quests for the various vampire factions.

The Masquerade And Being A Vampire

What I love most about Vampire: The Masquerade series is the amount of lore that is built into it. It’s not simply about being turned into a vampire and then running amuck. There’s an entire system called The Masquerade that governs the vampire’s way of life and you must adhere to it, or face the consequences.

In this series, vampires are nothing more than myth and legends to humans. This is due to the strict laws of the Masquerade which exists to protect vampire kind from extinction. This tradition was introduced after the first inquisition claimed many vampires in medieval times.

There are 6 laws (or traditions) that every vampire must adhere to are as follows. 1: Thou shalt not reveal thy true nature, 2. Thy domain is thine own concern. All others owe thee respect while in it, 3. Thou shall only sire another with the permission of thine elder, 4. Those thou create are thine own children and their since are thine to endure, 5. Honor one another’s domain, without the word of acceptance, thou are nothing, and 6. Thou art forbidden to destroy another of thy kind. The right of destruction belongeth only to thine elder.

Disobeying any of these traditions leads to a trial by council and instant execution. The main character of this game is brought into the world under the third tradition and was to be executed but was saved by a vampiress named Sophie who takes them under her wing as her Childe.

Vampire Factions and Side Quests

There are quite a few different vampire factions in the game including the Brujah, Malkavian, Nosferatu, Toreador, Ventrue, Tremere, Gangrel, and Thin Bloods. Each faction has it’s own unique appearance, abilities, and overall goals.

As an example, the Nosferatu are the most hideous and deformed of the vampire factions and are keen to stay in the shadows out of sight of humans. Their information network is vast, however, because they have eyes and ears everywhere and can go about unseen. One of the Nosferatu you help in the game is a private detective named D’Angelo.

You’ll wind up meeting various types of vampires over the course of the story, many of which have side quests for you to complete. Side quests can be taken whenever you’re on the map screen at the beginning of each night. Each side quests will have different endings depending on the dialogue choices that you choose but they ultimately have no effect on the overall story, they’re just self-contained stories to enjoy. 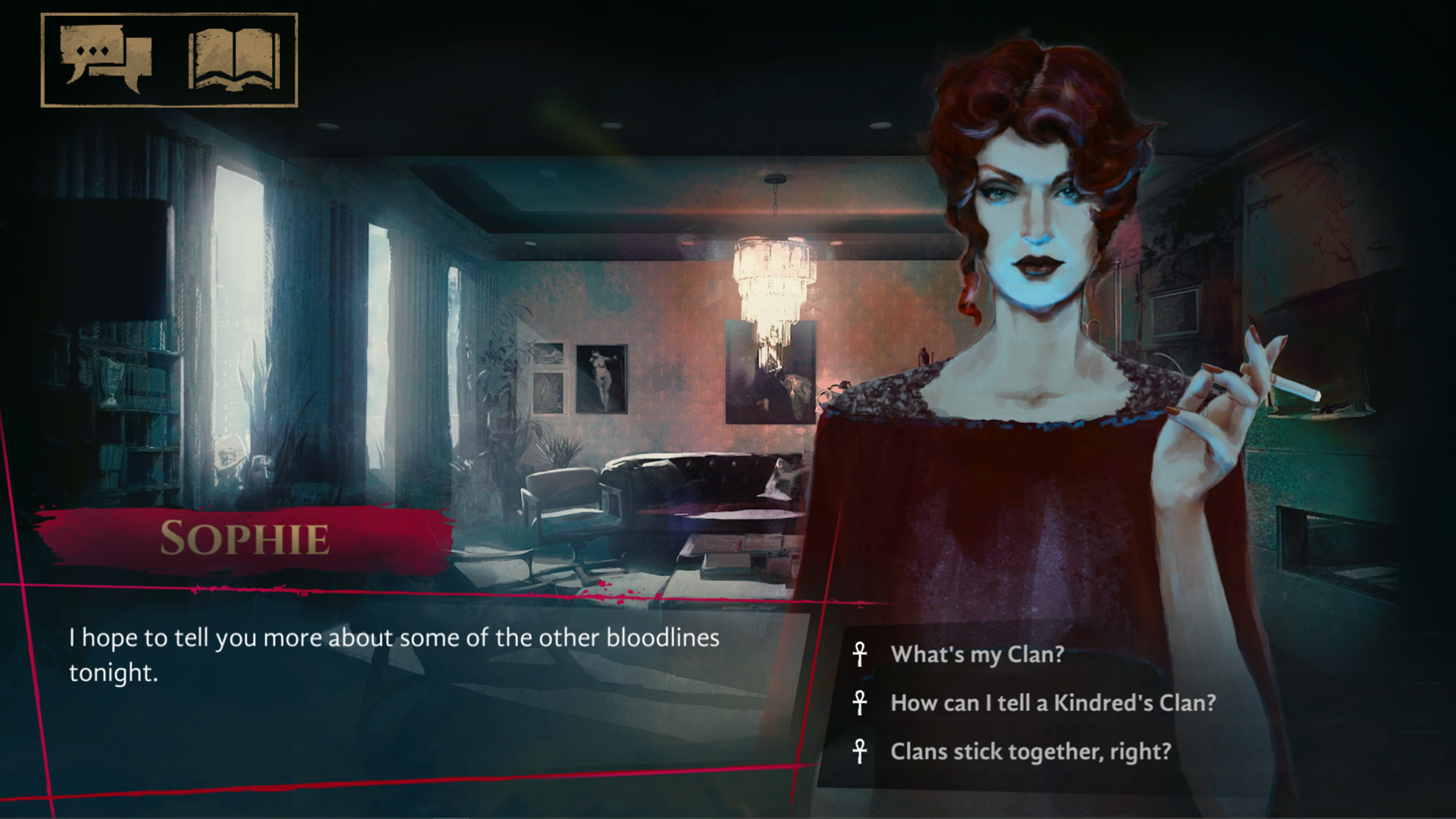 Overall, I’ve really enjoyed this visual novel. I will admit that it’s not exactly the greatest visual novel that I’ve ever played but what it has was quite enjoyable. The biggest thing that’s kept me playing is the characters. All of the characters that you meet in this visual novel are incredibly interesting. They have their own motives, personalities and each of their stories is very entertaining to play through. All of them are well written and the side quests were easily my favourite part of the game.

In the end, I’m going to save this one for later, if you’re a fan of VtM like myself you’ll love it, but I recommend waiting until it’s on sale.