Naughty goose! Such a naughty goose. Now go steal someone’s lunch and run like the wind!

For those who haven’t the slightest inkling of what Untitled Goose Game is, it is the personification of hellbent mischief in feathery form. You, the formidable said fowl, are on a mission to cause havoc. The premise is simple, there is a to-do list of actions to perform as a goose, all of which involve causing chaos in a certain area of a small town, and you must complete all these tasks in order to progress to the next area where more misbehavior awaits. These areas get increasingly more difficult as you progress until you reach the end of the game. Not much to it, right? It’s just a goose simulator. We’ve all seen animal sims before, boooring. However, you’d be totally wrong to think so. Instead of a rehash of old ideas, this is an amazingly fun and fresh approach to animal behavior that you’ve probably never quite experienced. 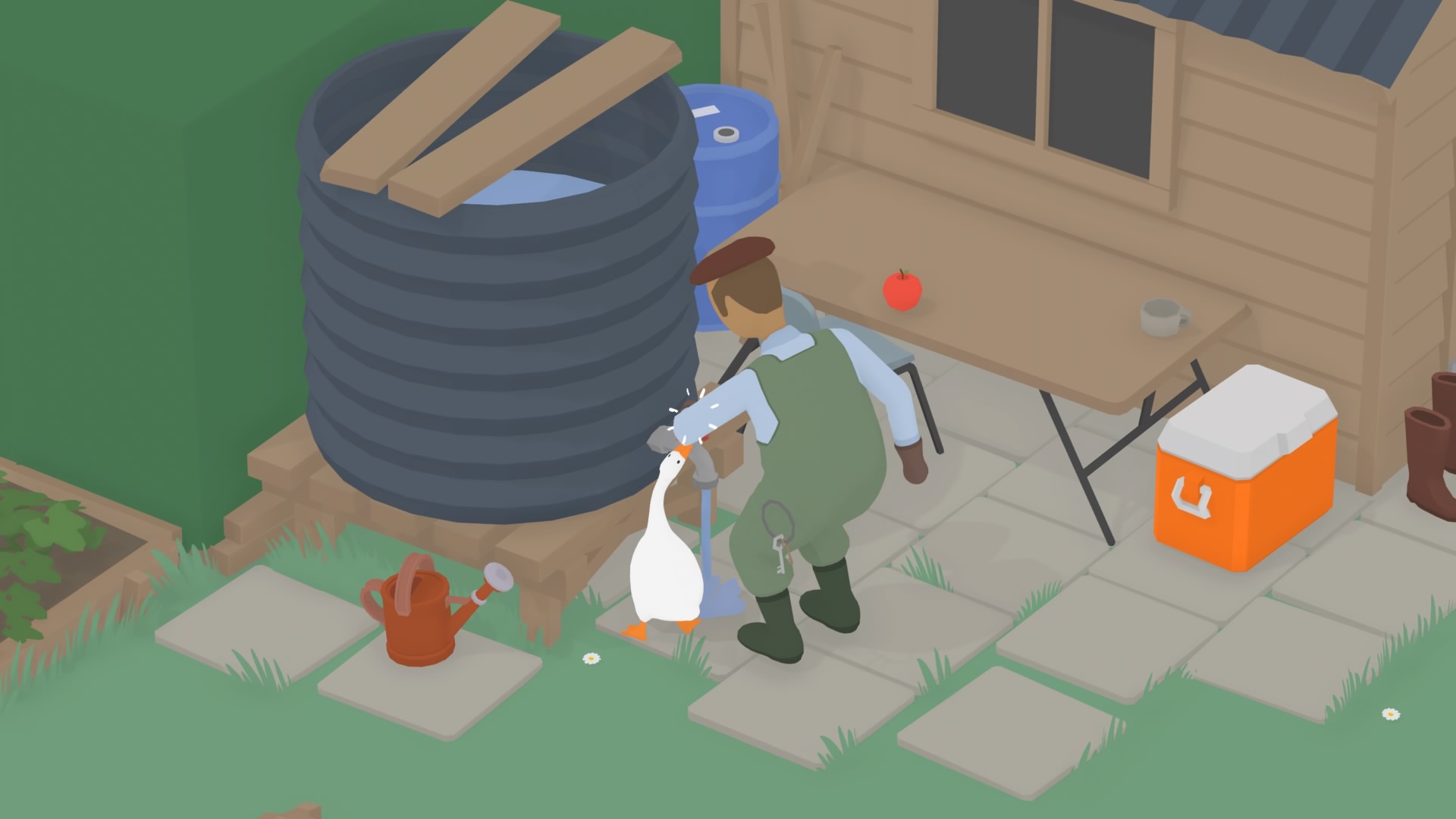 Such A Nice Goose

What Untitled Goose Game does quite differently, and very well I might add, is make the main character actions absolutely full of whimsy and charm while using an AI for the townspeople that actively prevents you from finishing that to-do list without being overbearing. You are also surrounded by an environment that is highly interactive to the point where you are divining your Jedi Goose powers to perform outrageously silly acts of mayhem. These are no simple fetch quests. It involves some serious planning and thinking to get that pumpkin all the way to a picnic, stealthy finesse to manage to hide away under a platform to get a pepper shaker from a table, and absolute bravado to make someone wear the wrong glasses. Nothing about Untitled Goose Game comes off as a sim game in the least. It’s a puzzle strategy game in the waddling guise of an animal sim and you will likely have a total blast.

Moving to and fro with the Dualshock 4 controller is nimble and on point. You can honk, flap your wings without actually flying, waddle, swim, and grab things in your beak with relative ease. There is also a run button, which you will be using often, but it makes it hard to turn, so use carefully in tight corners. There is no option to jump, so be aware you must figure out how to get things that are high up or give it a go at building a ramp of sorts, which often does not work well. 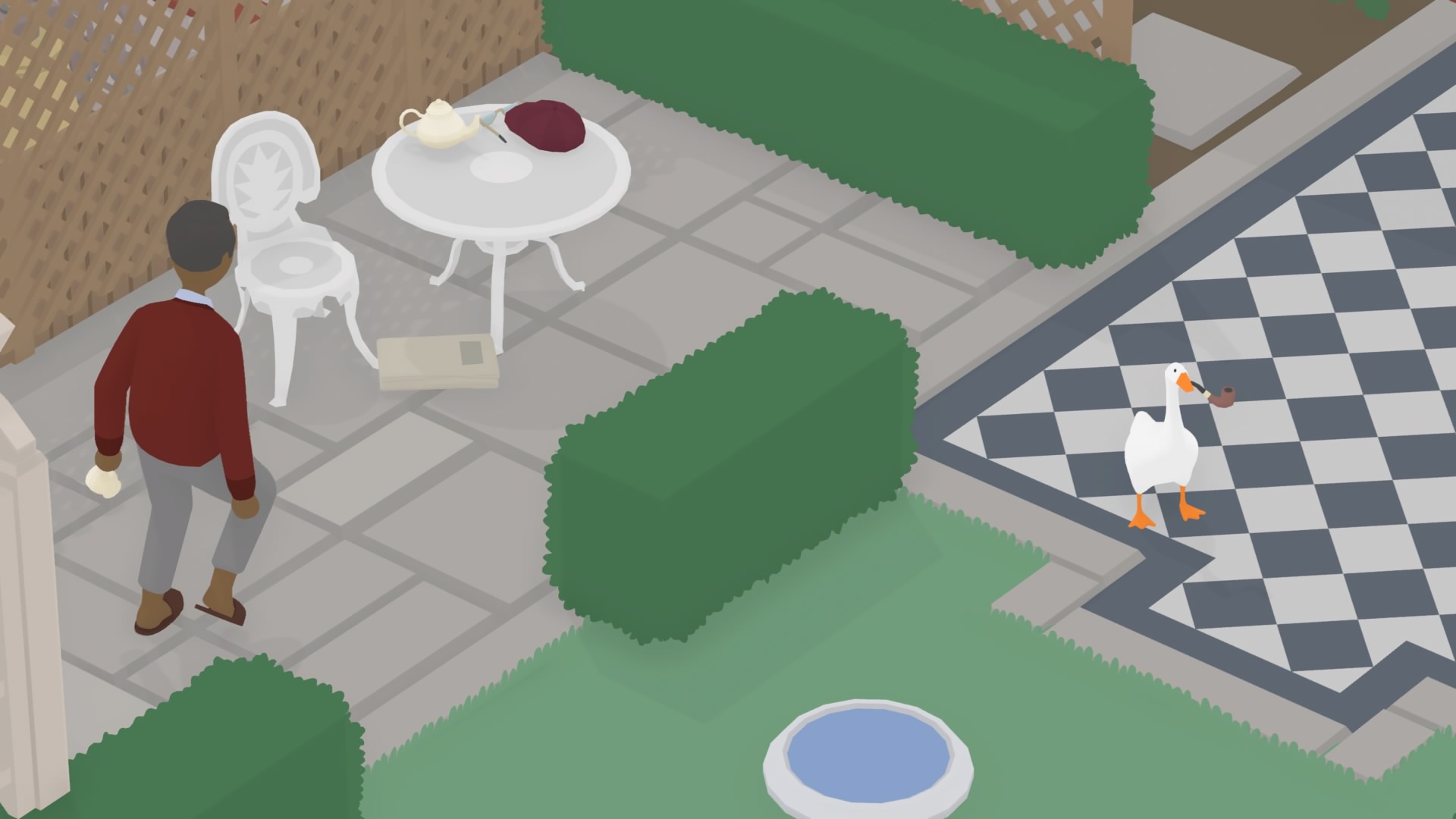 The speed and precision of the goose in relation to the townspeople is enthralling. You can twist and turn just the right amount in order to steal some keys or hide away under a wooden deck, but there is just enough difficulty to make it a precise movement. You can also take careful aim and untie some shoelaces right at the exact moment you need to, helping to prevent being chased out of your area.

Missions on the to-do list are of the puzzly nature and range from easy to incredibly hard to pull off, but nothing obnoxious until close to the end where it took me almost an hour to get the Burly Man mission done. I do have to say, if you are not good a puzzles then this game can get ragey at times. It really makes you think. There will be moments where you simply have no idea what to do and you’ll have to wander about trying this and that until it dawns on you how to solve the problem at hand. Often, situations involve multiple actions in order to solve them such as hiding in some bushes, waiting for someone to turn their back, turning on some water as a distraction and then running off with something at the last moment as you dash under a table to hide. It is as stealthy as stealth gets, but instead of tension and fright you have excitement and thrill. What a wonderfully different type of feeling compared to most stealth games. 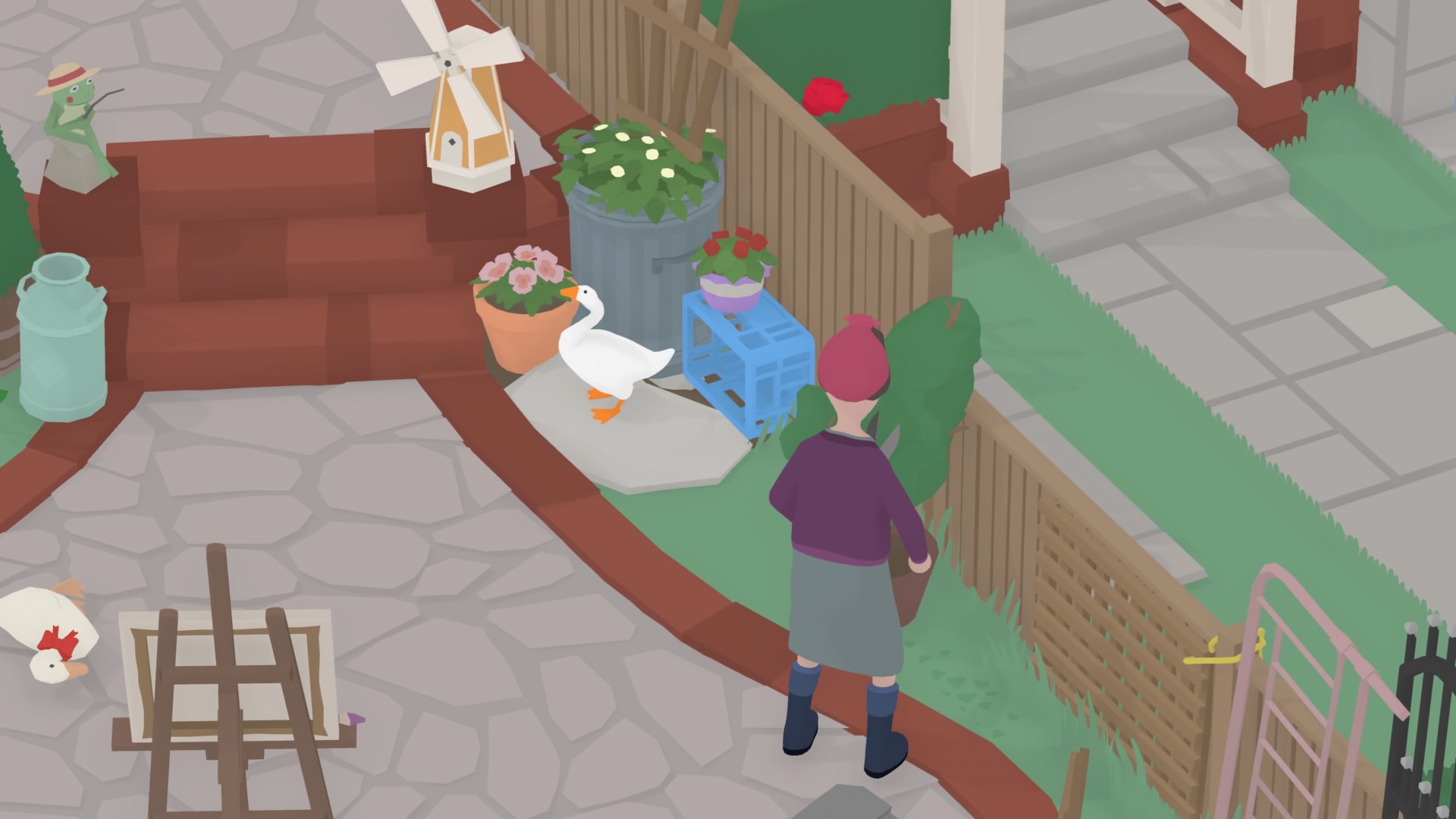 The nice thing is that the town is so fun to mess up, that it never feels like a chore. A good deal of thought was put into how to make the game addictively fun and that tone comes through the game to the core. You are a goose ready for adventure, with no task insurmountable and ready to make the local humans go insane with frustration as they generally chase you off in a tippy-toe dance to the tune of “shoo, go away!” piano notes.

In addition to the the to-do list, there are hidden trophies to uncover that are a mystery to see unless to check out the trophy section to secretly discover all the things the game is hiding from you. I unlocked the first one by accident and I howled with laughter as soon as it happened. Once you have finished the game, you can go back and complete any missing trophies, so there is no need to restart unless you feel the urge to do so. 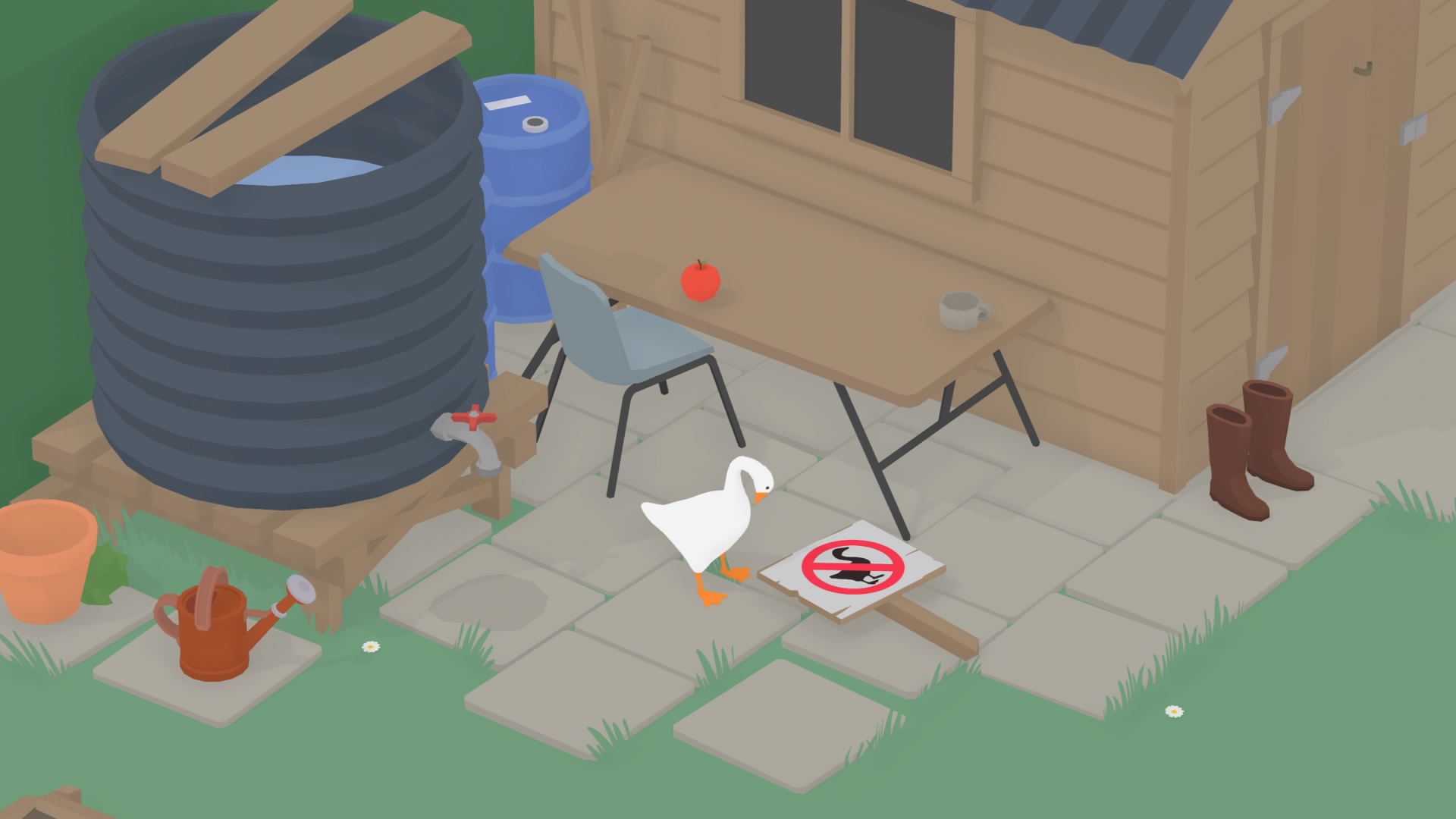 Sonically, while there are plenty of environmental sound effects the game is mostly silent except for a delightful piano accompaniment when the goose is getting into things. I found it amazing. It is literally like a Mr. Rodgers Neighborhood piano that reacts to how you are playing rather than a continually looped soundtrack. Much like the rest of the game, it is paced by how you play with a purely responsive feel. This keeps the player more involved because everything they do creates the tone of the music.

Graphically, the art style looks like single color 3D model designs and the actual rendering itself and how the townsfolk are drawn is as much a character as the goose. Most of the game is interactive, with something you can pick up or drag around every corner. This leads to hundreds of options as the simple design layout is given depth with actionable objects. Instead of character faces and detail, you have smoothed out faces and no details. The movement of the people and the goose is where the realism is shaped and formed. You look less at the graphics and more at the movement than anything, it’s what powers the feel of the game, giving it that sense of mischief, charm, and humanity to the townspeople. 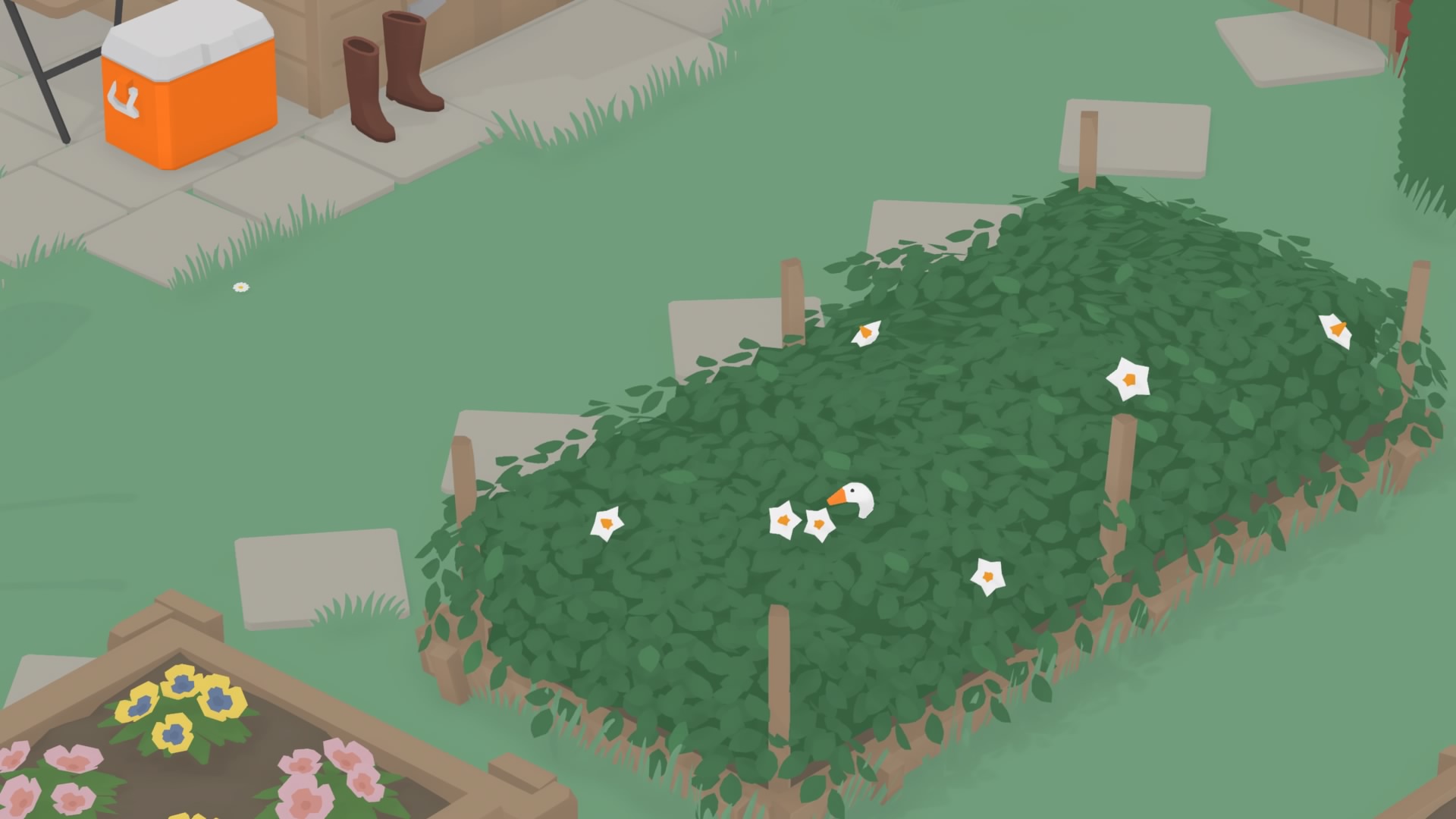 So, is it worth buying? While the game is rather short, clocking in at around five hrs for my play time with some time alloted for the extra to-do missions I’ve done, it’s completely worth adding to your library. While not an absolute insta-buy, I really feel it offers a truly amazing experience and has some of the most inventive puzzles of the year. You are basically a crazy goose who steals everything and drives the townspeople batty, but it’s such a wonderfully fun time to be had that you’ll be chuckling and smiling more times than you can count. What the game does best is grab hold of of your attention and place you in the impossible position of being a goose while enabling you to be as naughty as you want to be. Yet, it is more than that because the puzzles themselves are unpredictable and humanly complex rather than something you’ve likely seen before. It’s that relatable feeling of the puzzles to real life that makes them so memorable.

It’s also a great game for kids! Both my kids, one in elementary and one in middle school, adored this game and found it hilarious. So, if you are looking for a family friendly game that you can finish with the kids without too much time involved, this is totally the game you are looking for.

I really enjoyed Untitled Goose Game and count it as one of the best indie games of 2019. Go get honking!