Annie has a lot going for her: a nice car, a fiance who has a solid job, and a nice neighborhood community in what feels like half San Francisco and half New York. Then a strange zombie outbreak occurs right in the middle of Halloween festivities. From here the game turns into an isometric shooter with zombies to mow down and kick. When you aren’t thrashing zombies you will be scrounging through ruins to find items to sell and help you gear up for the next encounter with the undead

ANNIE: Last Hope, seems to be the culmination of many different inspirations from films like The Thing to games like Metal Gear Solid and Resident Evil. It feels like cheesy horror in parts, but also taking cues from loftier places. With these wells to draw from Pixel Rice attempts to craft a thoroughly cinematic voxel action-adventure with moments of suspense and sadness set against the backdrop of yet another zombie apocalypse. 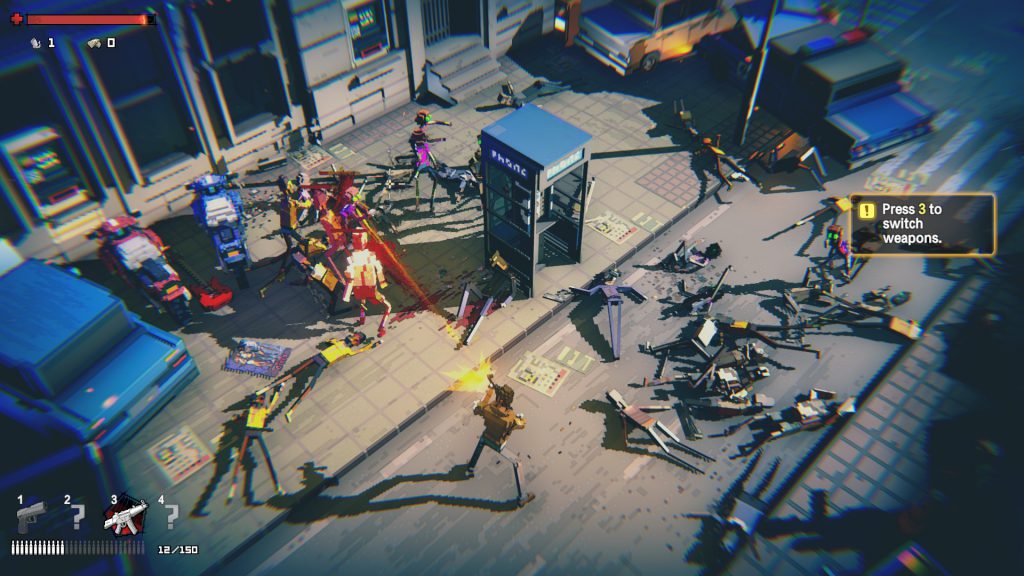 The gunplay does not stand out too much in this shooter, at least not at first. Players can blast the undead with a limited pool of weapons currently, with more on the way as the game develops. There are all the classics like pistols, revolvers, and shotguns, while a bow becomes available later. You can upgrade these up a tier with increased stats when come across a vendor, which is really a nice title for someone who is taking advantage of a disaster.

There is surprisingly no melee weapons available, but that doesn’t seem to be a problem because your character has a kick strong enough to take out half a health bar, cleave to other enemies, and provide some nice knock back. Along with that there is a classic dodge roll available, but it has some inconsistent invincibility frames attached to it. The default walking speed is slow, and slower still when aiming, so holding down the sprint key is a necessity when comes to trudging through the gloom of a game with subtitle “Last Hope.” 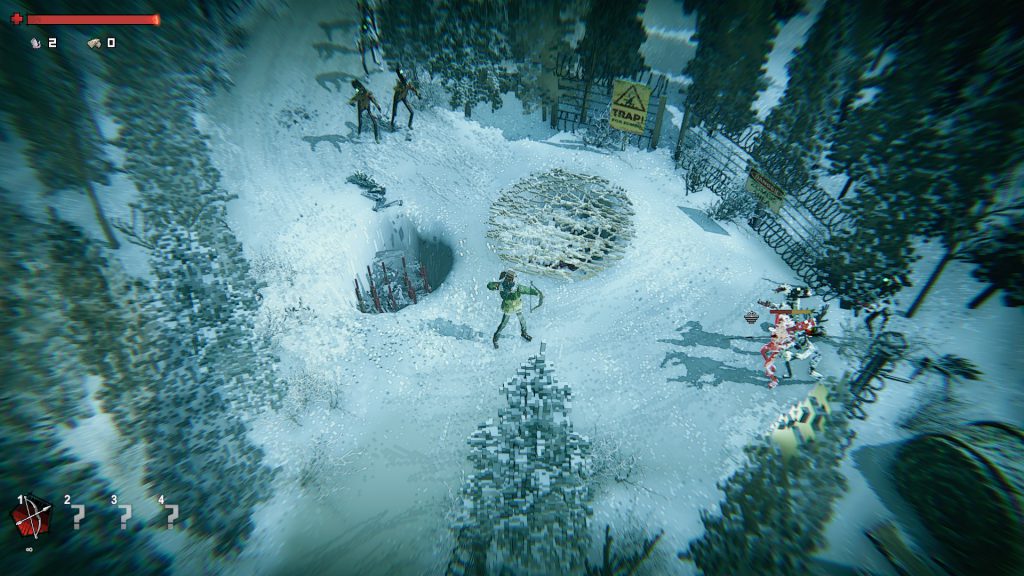 There is a tonal shift in both story, tone and gameplay in the second chapter. Here the player mainly uses a bow as they carve their way through an arctic nightmare. This setting also brings out environmental hazards like haywire machinery and spike pits. These changes to the gameplay felt welcome, transforming the feel of encounters: it felt more strategic and less like dull wave based defense. 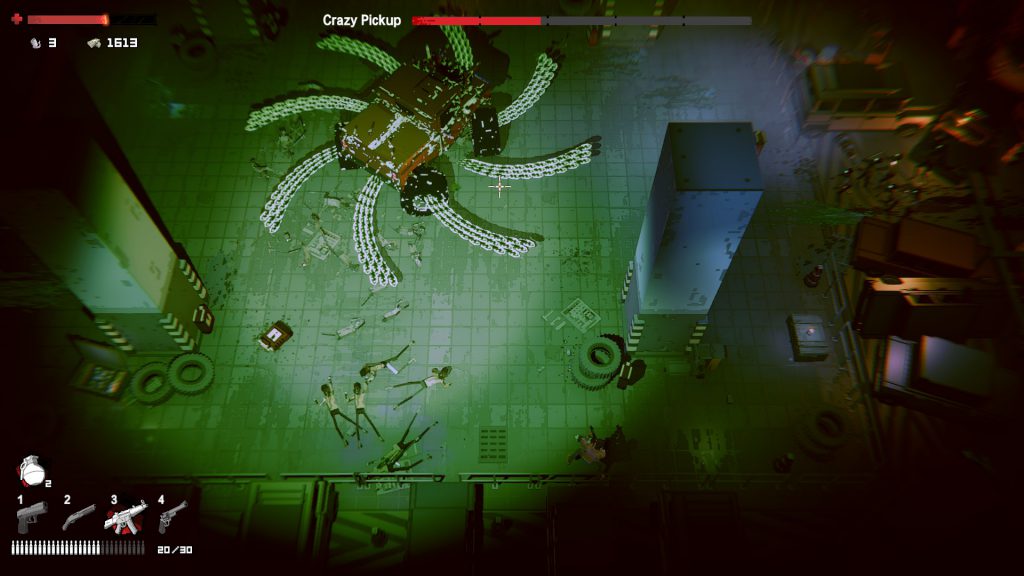 Aim for the Head

The top down shooting comes in bouts, with the rest of playtime spent sightseeing. Players will scrounge around a variety of corridors and open areas that start looking too familiar 10 minutes in, and then there will be an area with either waves of zombies or a boss fight. Despite only subtle differences in appearance, the zombies do behave differently and some thought has to be put in when kiting. For example: the average zombie can be kicked around while you focus on more pressing threats like the fast, but easy to kill, running zombies or the lumbering heavy hitters. There are a few non-zombie enemies as well like a jumping crab crate or tires, because maybe the anti-consumerism from Dawn of the Dead was taken too far. The boss design and story elements both take some interesting turns. 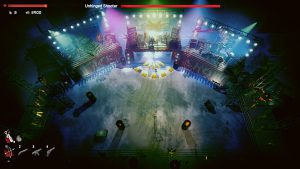 The bosses range from slightly believable to wacky. There is an infected monster truck that ends with the owner asking you to pay for the damage you caused to his actual monster truck. Then another boss is a cruel man that the player leaves to die violently by his own machinations. These bosses take on a heavy bullet hell vibe, but they also highlight the gamut of narrative tones the game is trying to achieve with a questionable success rate.

Getting Carried Away with Kubrick 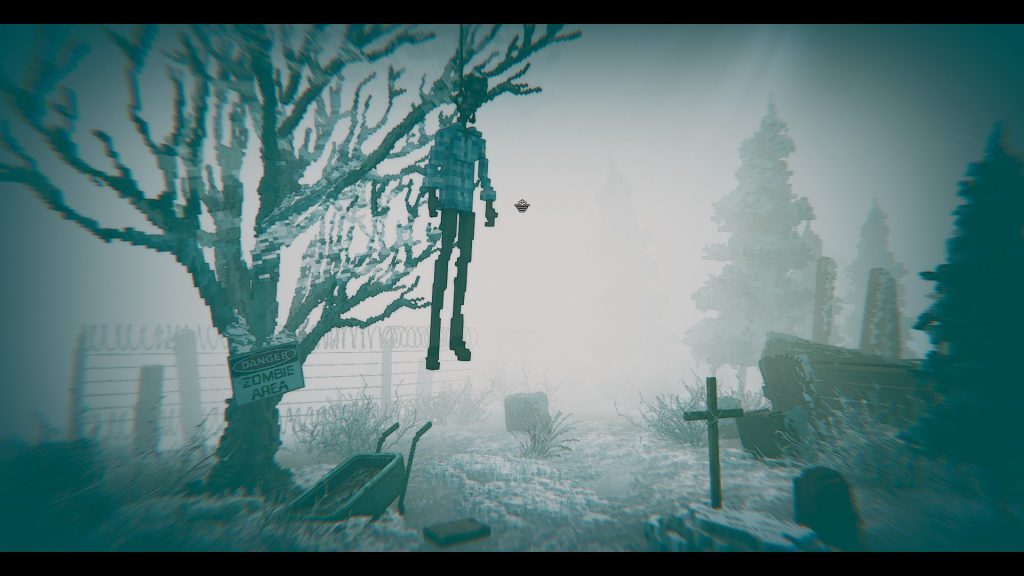 The game wants to tell a story and be taken seriously, at least its excessive lighting tells me so. The vignetting, dramatic coloring, hazy look, camera movements etc. all get dizzying, but they certainly bring out a cinematic quality in might well be the most stylish voxel game currently released. It’s no small feat given how much love gets thrown at the renaissance of pixel art games on the market. Sometimes it feels too effects-heavy and forced, but those are the growing pains of a new style. At least visually, it is satisfying to have a piano interlude complete with flashback and dramatic close ups, or a sunrise over a desolate winter wasteland. The sound also does a nice job shifting with the scenery as an upbeat weekend jam quickly turns into synths and the ambient noise of screaming and chaos. The exposition and story that is meant to be helped by these visuals can’t quite keep up. 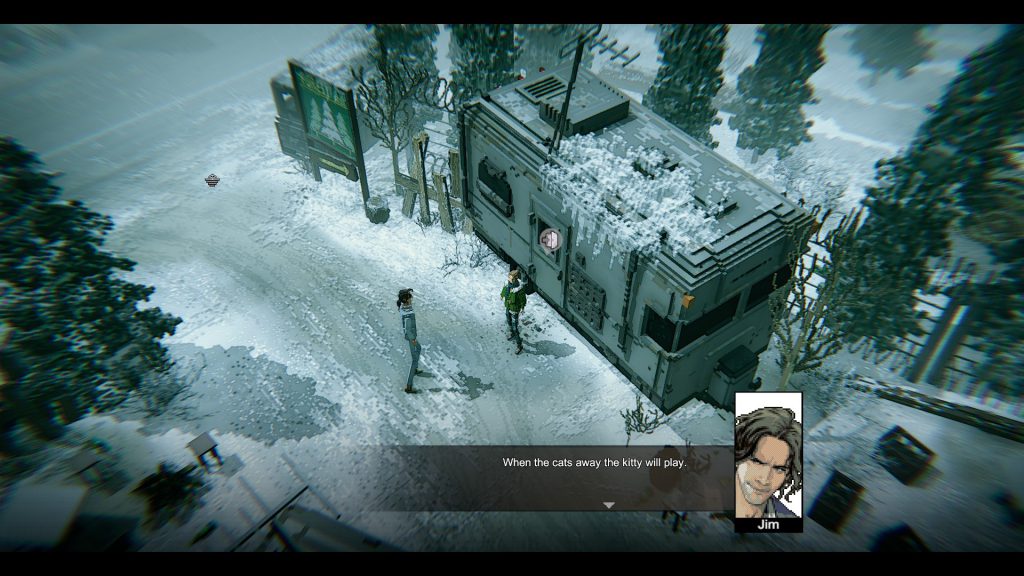 A lot of the writing is trite or not believable. People shrug at something obviously shocking like radioactive looking crabs, or jump to weird actions with little motivation such as pointing a gun at someone who mildly declines a rather large request. The characterization is also hamfisted as told through the dialogue: imagine an octopus trying to apply makeup and you wouldn’t be far off. An example of this is the creepy character (who calls women kittens every 2 seconds) being so much of a parody he somehow sucks away all the sleaze of 80s cinema. Some of the translations are also clunky here or there, but even perfect translations wouldn’t make certain moments, like Annie and Jack’s meetcute, feel less clumsy or strained. There were also a few times where it was easy to miss the dialogue because the little portraits with text would overlap each other or get out of sync.

On top of being basic, the gameplay also feels a little off. Those sections of linear exploration between the main action seem to have little guidance and it’s surprisingly easy to get lost on your way to the next stand your ground area. The also game likes to end certain exhausting sections with a surprise instant kill with something like a car running into an elevator or an excavator plopping wood on the wall near you to open an exit. These moments felt cheap and almost like these sections were meant to add on play time by making you repeat it. This is an unnecessary drag. 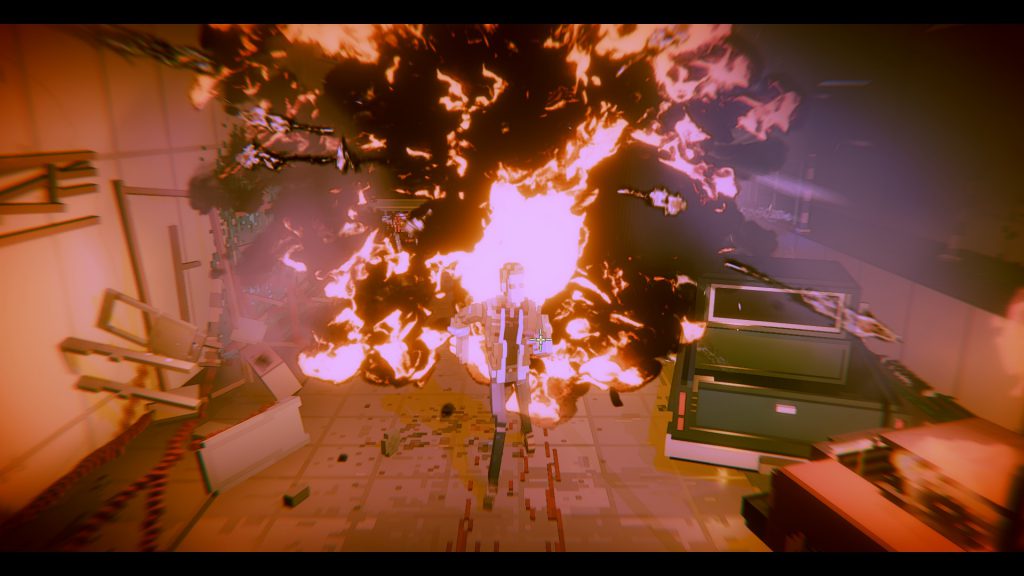 There were a few minor bugs here and there. Sometimes enemies wouldn’t cause damage when attacking. Not necessarily a bug, but at some points when I decided to quit the game I would be pushed back to a much farther checkpoint despite the game saying it had been saved just moments ago. These were minor issues and they don’t really affect my feelings for the game. 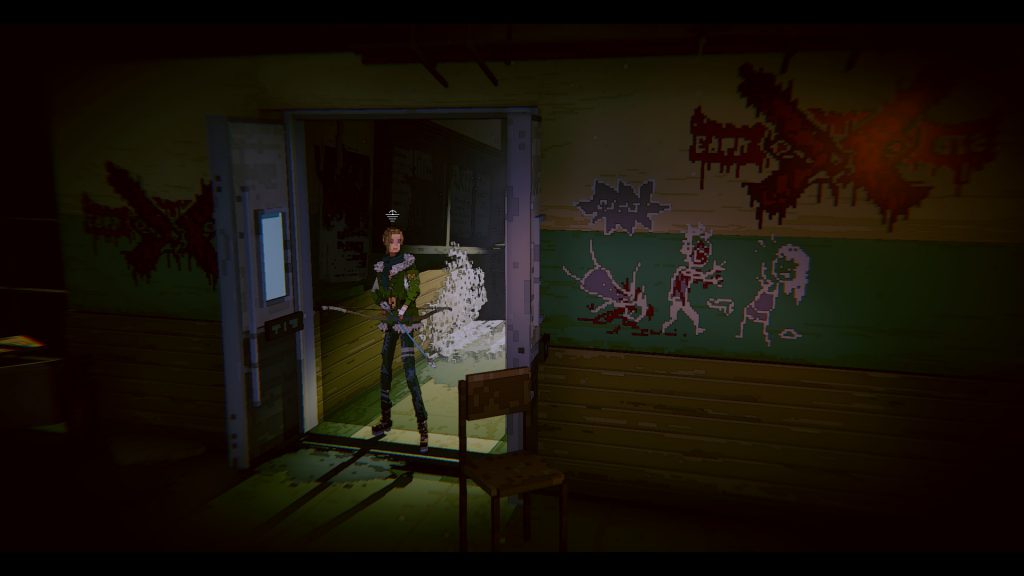 Visually ANNIE is pushing boundaries and it really wants to be taken seriously. The cutscenes have a style and the game could build intrigue with proper polish. The gameplay manages to be average as it is, but I don’t think adding more monsters or weapons will necessarily change that. I enjoyed the second chapter far more than the first. It almost felt like I watched a b-movie in chapter one and then I got treated with a more quiet indie piece in the second chapter. I liked the art and presentation, but my reaction to ANNIE was tepid at the moment. A strong ending chapter could turn things around a bit.