It turns out the real Everlasting Sapling was the friends we made along the way.

Ever since the new Queen in the Ant Kingdom was in power, many explorers have gone out to search for the Everlasting Sapling. Rumored to grant immortality upon eating and located somewhere within Bugaria, the more explorers seeking it means that more areas will be searched. Or, well, that was the hope at least. Some areas do have a history of no bug ever being seen again and any explorer tempted to go looking will most likely be scared off. This brings us to the current day, where no progress has been made so far. However, a new team has something to say about that. 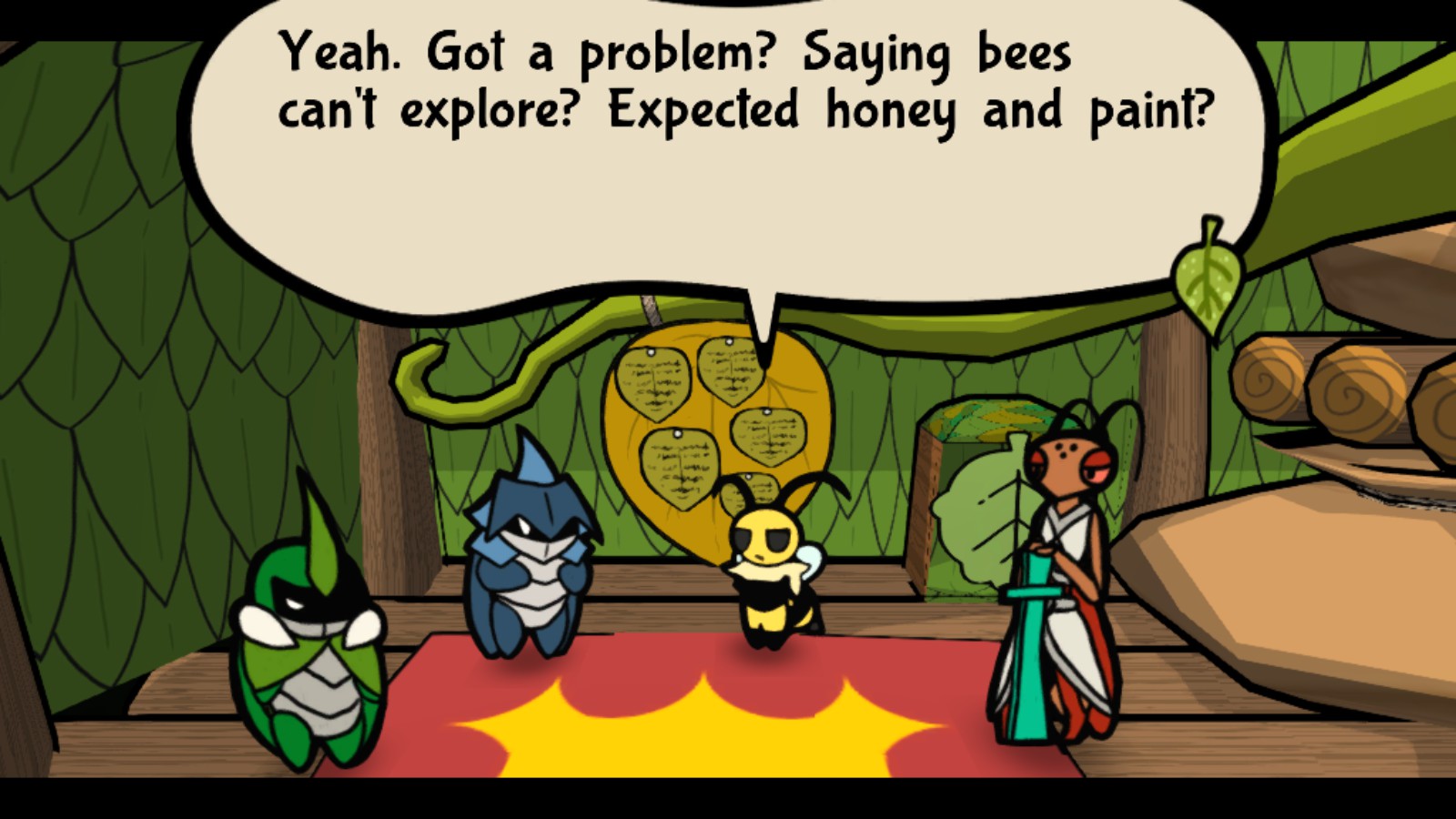 This brings us to two bugs just trying to start out as explorers: Kabbu the scarab beetle and Vi the bee. While they teamed up to mostly appease the “you must be a duo” rule, it’s hard not to bond when you’re protecting each other in the face of danger (aka other bugs). It’s not long into their adventure that they find a mysterious moth within the feared Snakemouth Den. Luckily, they weren’t dead as it originally seemed. While they do have amnesia, this particular moth going by the name Leif has the rare ability to do magic (particularly ice magic).

Granted to have a trio, rather than the standard duo, so they can stay together, this team is set out search all throughout Bugaria to find artifacts that will hopefully point to the Everlasting Sapling’s location and find out Leif’s past. 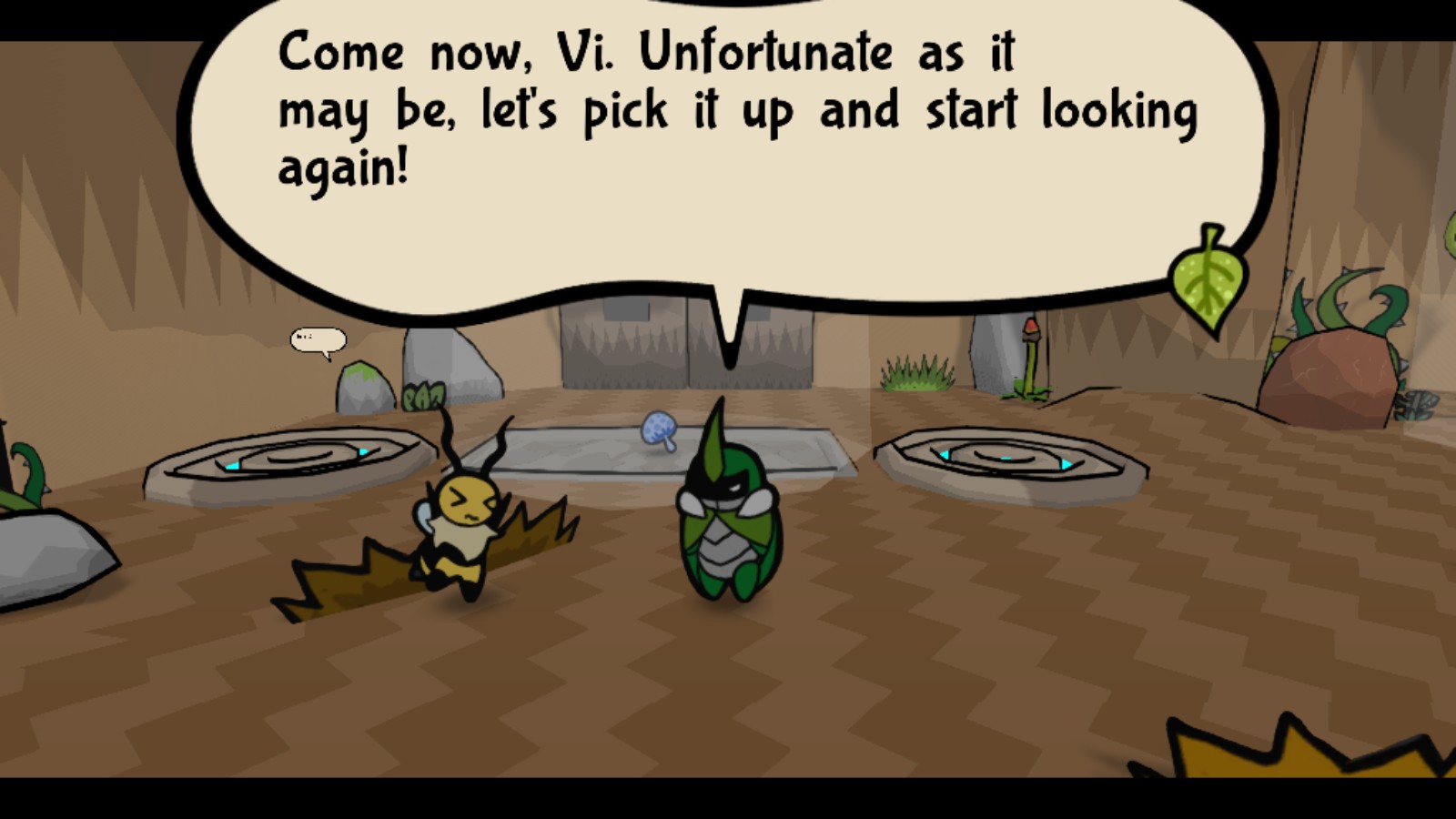 If you’ve ever played a Paper Mario game, or any game that takes the same notes from its combat, you’ll quickly become familiar with the combat system. The combat is based on your timing or button presses. Depending on what your attack will be, you’ll either be holding down or pressing a button until the right time or have to button mash your way to fill up a bar for certain abilities that use up TP (or Teamwork Points). Blocking enemy attacks will mostly have you properly timing your block to reduce damage. Too early and you won’t be able to put up another block in time, but blocking right before it hits you will reduce damage taken the most. Though, some enemy attacks will require you to mash buttons to reduce damage or prevent status effects. 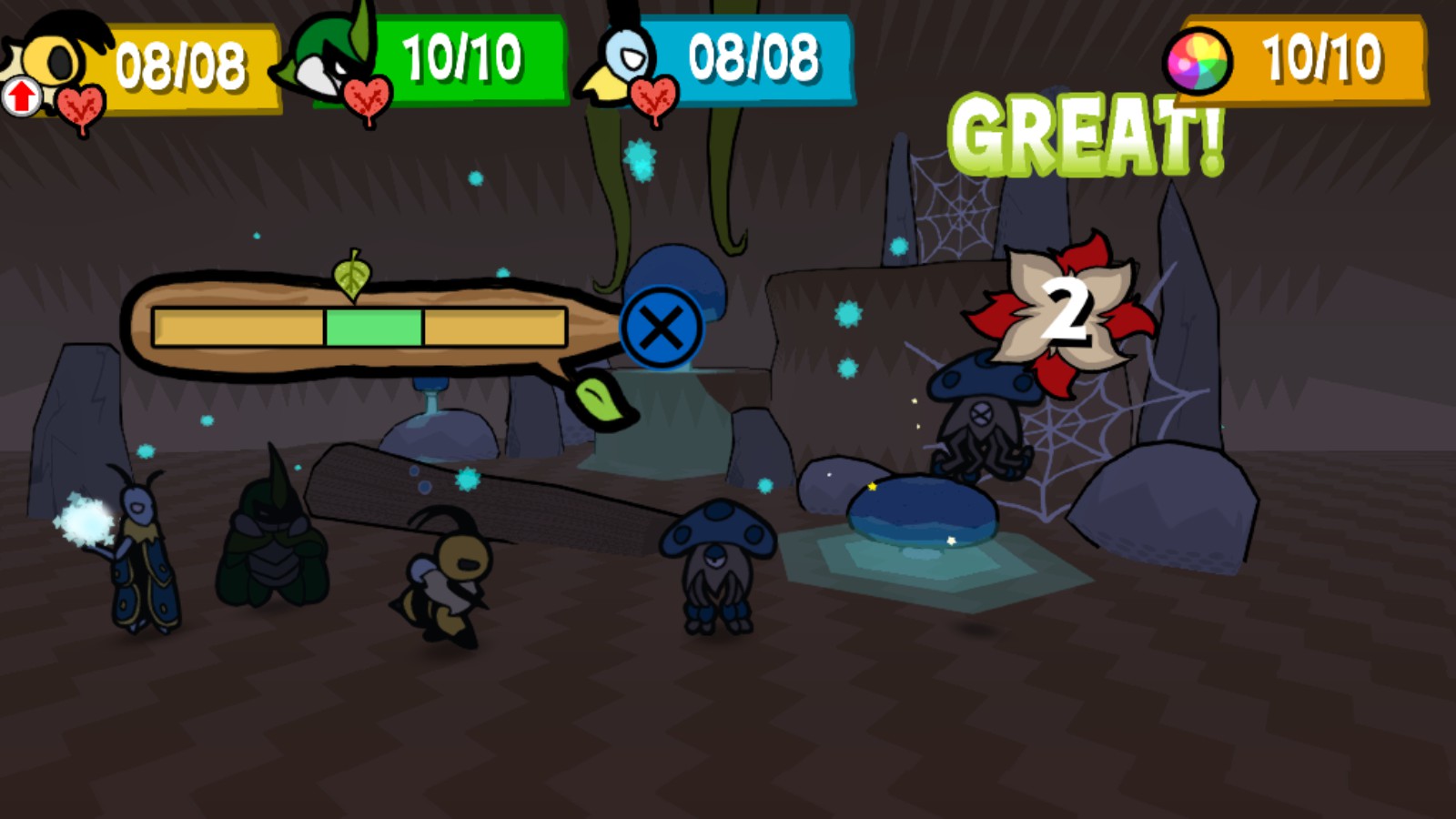 For attacks that require you to button mash to either successfully pull them off or defend against them, there is an option to change it to button sequences instead so it can be easier for those having trouble with them. Keeping in mind that I was playing on a controller the whole time, I had the most trouble with Vi’s Tornado Toss (which requires you to mash the left and right directional buttons) and somewhat when defending against attacks. It is a lot easier on keyboard, at least Vi’s attack is, but even if you’re okay with temporarily switching to keyboard controls, I do recommend switching from button mashing to button sequences. 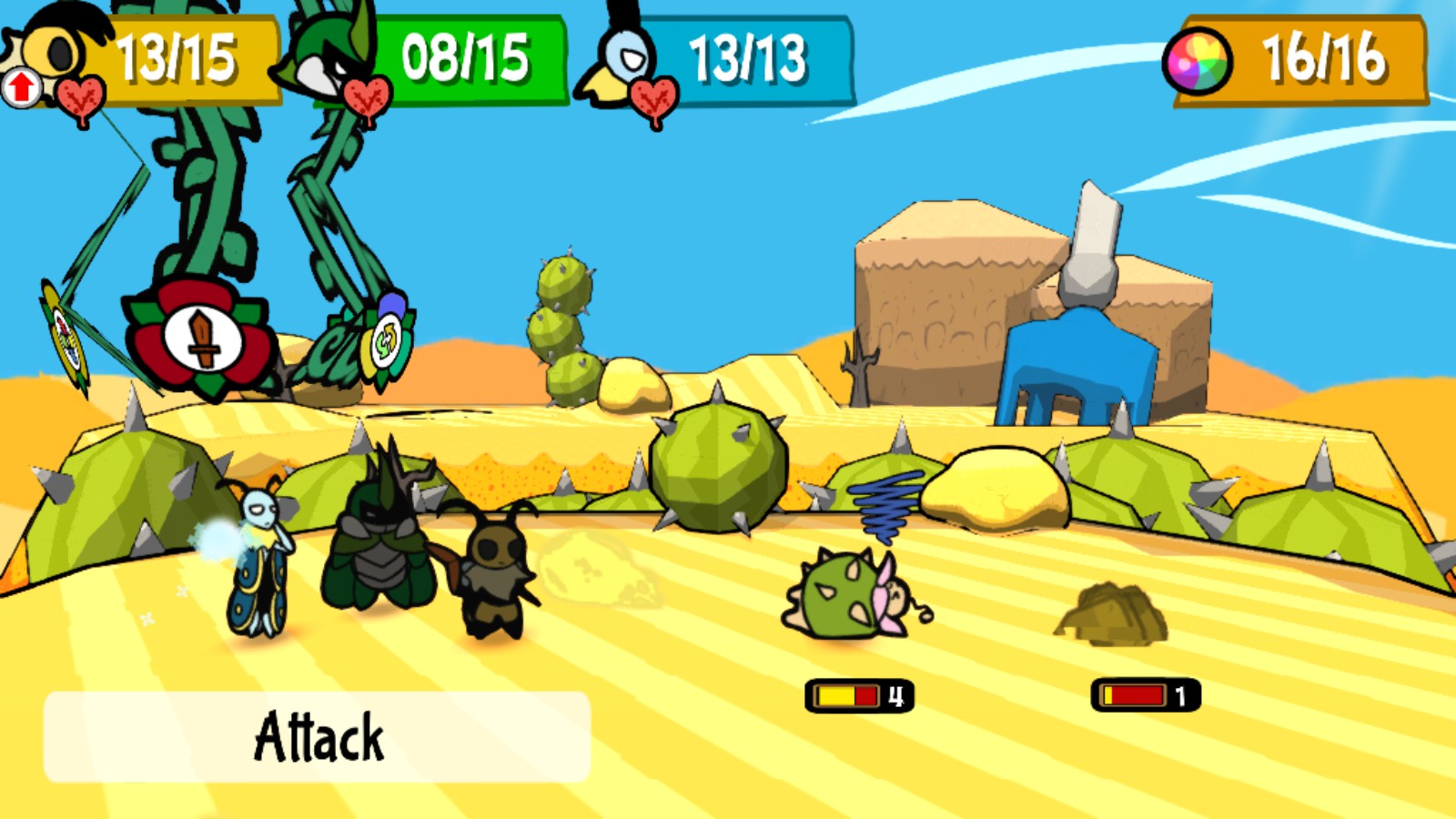 Aside from the usual using items to restore health/TP or cause/cure status effects (which you can cook to make them more effective), do nothing, or inspecting the enemy, there is a surprising addition: Turn Relay. Usually, when playing an RPG, you’ll have to do a turn with every character no matter what, instead Bug Fables lets you give a turn away to another teammate. It will exhaust the teammate that’s taking the extra turn, but this allows you to exploit an enemy’s weakness more than once a turn. This is particularly helpful towards airborne enemies as Vi is the only one that can reach them with her standard attack, enemies that need to be flipped over by Kabbu, or enemies hiding underground that can be unearthed with Leif’s ice magic (or give yourself another try to freeze them).

Once you rack up enough experience, leveling up will let you increase HP by one, TP by three, or Medal points (MP) by three. Having health be the lowest one is pretty weird, but having enough TP and MP is arguably more important. At first, increasing your MP seems useless, especially since your medal collection will be pretty barebones, but after a while you’ll soon have enough to where you’re debating on which ones you actually need to make room for a certain medal. Medals basically have their own effects that will help you out if equipped, like adding more HP to a character or giving one a new ability, though most will need you to have enough MP to equip. Once you start getting a medal collection, you can even find medals that work better together rather than individually. Medals can be found by exploring every dark corner, purchased, or by completing side quests. 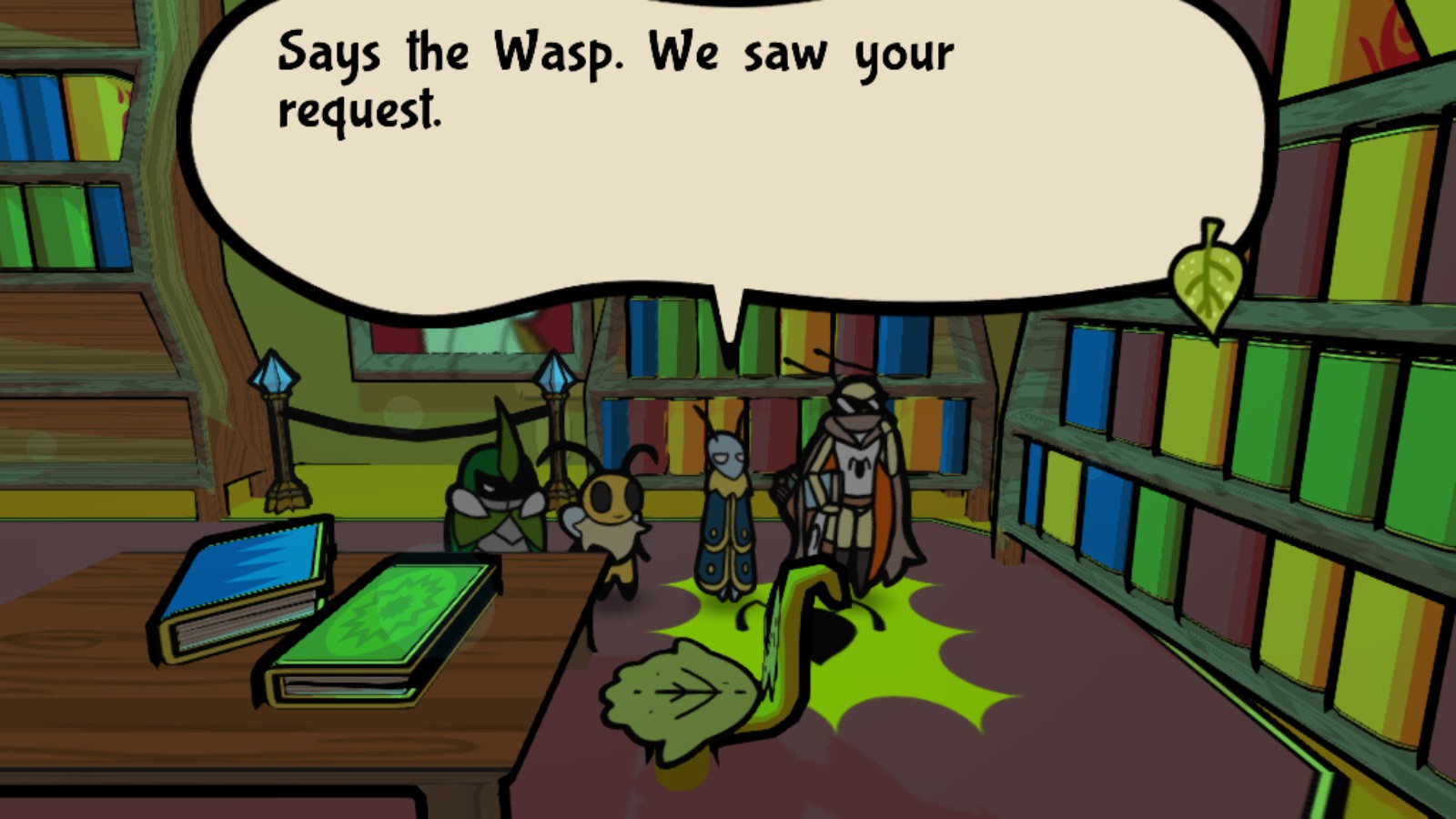 If you think Bug Fables only has the main story, oh boy, just wait till you see the side quests. You can pick up side quests at any quest board and more are added as you advance the story (and I’m talking about milestones, not per chapter). There are so many that it’s almost overwhelming and you can easily fall behind if you don’t keep up with them. Even then, it doesn’t stray to the bad as Bug Fables seem to make everything you need to do a delight. Whether it be seeing how Kabbu, Vi, and Leif’s friendship blooms, being able to interact with all the other colorful bugs populating Bugaria, or getting some lore. In addition, there are also secret bosses, or bounties, that you can find and defeat for a sweet medal and some berries, which act as Bugaria’s currency. These bounties aren’t as easy as you’d think so be sure to go prepared.

Outside of battles and doing side quests, you’ll travel to many locations that require you to puzzle and platform you’re way through. This is helped out with each character’s field ability as Vi’s beemerang can activate switches out of reach, Leif can freeze water or enemies to block of ice, and Kabbu can cut grass or move Leif’s ice blocks into the right position. As the game goes on, each of them will reveal a new field ability when it’s needed most. Puzzle wise, I’d say it’s pretty much in the middle: the puzzles are hard but also easy in the way that you just feel dumb once you realize what you needed to do. The most embarrassing moment was late game when I didn’t realize what I was standing on and all I had to do was walk south to discover what I had to do. 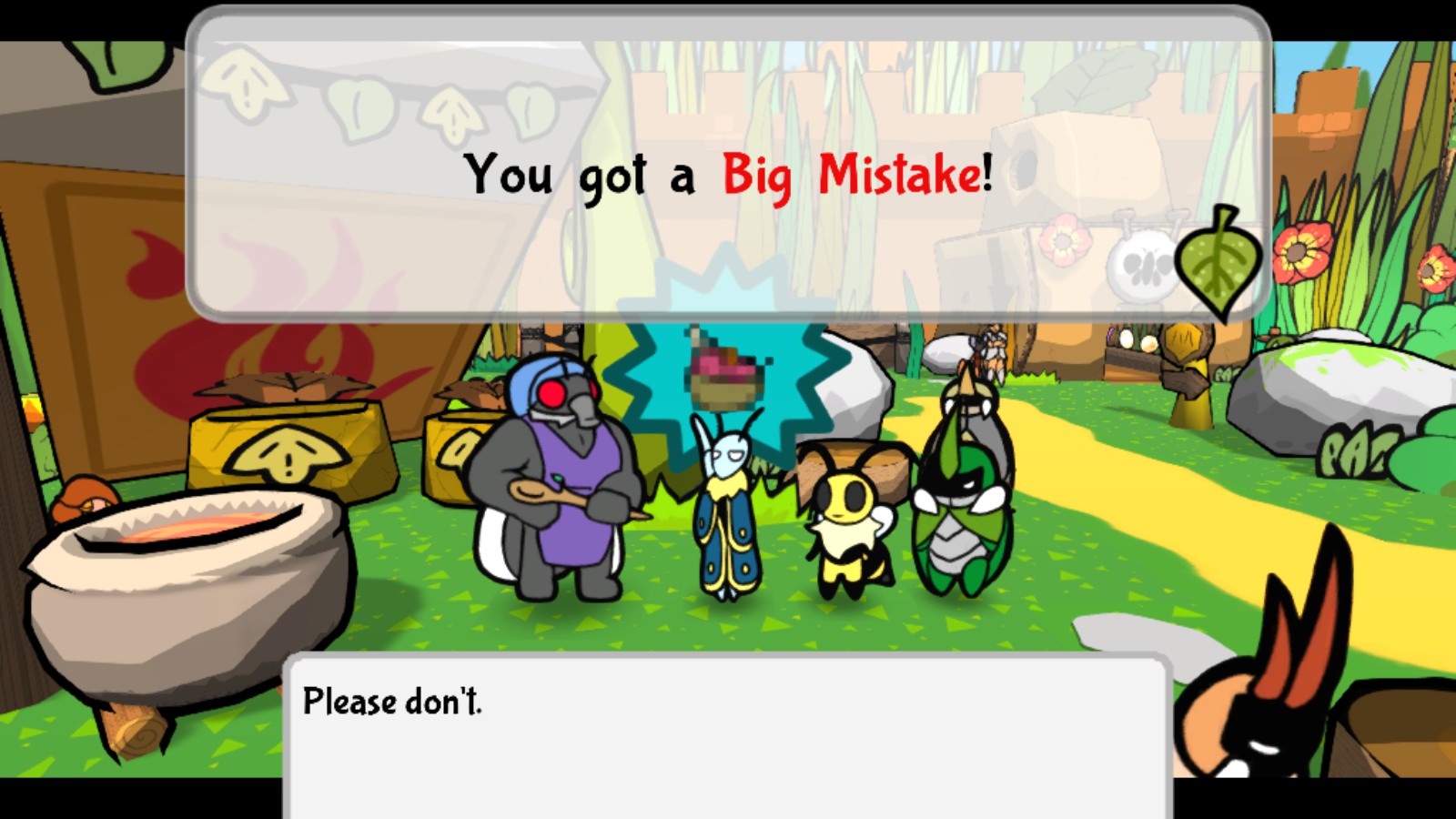 Oh, you’re looking for a challenge? Well, Bug Fables has your back. Before you embark on your journey, you’ll be given the Hard Mode medal. Having the Hard Mode medal equipped will cause an enemy to be stronger, have more health, and more defense than they usually would have, but the experience is increased and item drops are more rewarding. In addition, if you manage to defeat a boss with it equipped, you’ll get a free medal. If you want the game to be even harder, there is another medal you can buy later on aptly named Hard Hits that will raise enemy attacks even more in exchange for doubling your berry reward. Even having just Hard Mode equipped will push you to perfect your dodging and have enough healing and TP restoring food with you. 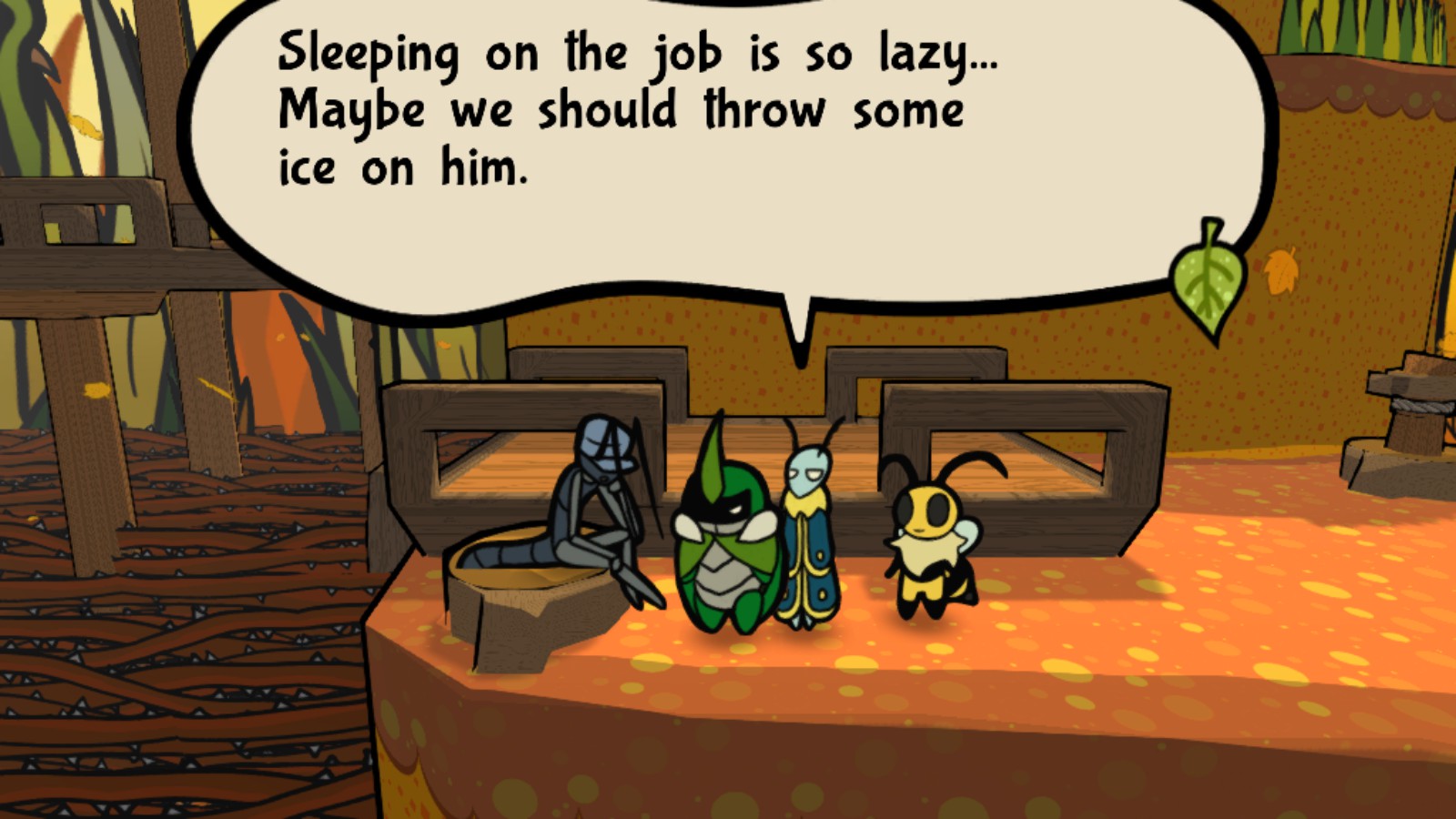 During my whole playthrough, I only ran into two bugs. The first one, which I ran into a couple times, was the game freezing after tabbing out sometimes. This wasn’t too annoying since my last save wasn’t too far and it was easy to redo everything, but it certainly could have been if I didn’t save as often as I did. Still, I don’t see many going hours without saving as the game does try to get you into a habit of at least saving whenever coming across a save crystal. Another one is related to a bounty boss which suddenly died despite having like 30 health left. Granted, this is under the unintended helpful bugs as the bounty bosses are pretty hard even if you don’t have Hard Mode on.

There were a few things that did kind of bug me, but these can just be chalked up to my own personal preferences and didn’t affect my enjoyment. Like I personally would have liked the team’s ATK boosted after so many levels since Vi and Leif did feel underpowered towards certain enemies. Though admittedly, this mostly stems from me wanting to quickly defeat low level enemies since once you level up enough they only give you one experience point (even though they might have kicked your ass). There is a medal o insta-kill low-level enemies, so it’s not too bad, but you rarely get any berries or food items that way. Although, this does have the plus side of bosses always being challenging. There are also some side quests that don’t fully update, which can cause some confusion on where you have to go if you set out to do others first or came back to the game later on. 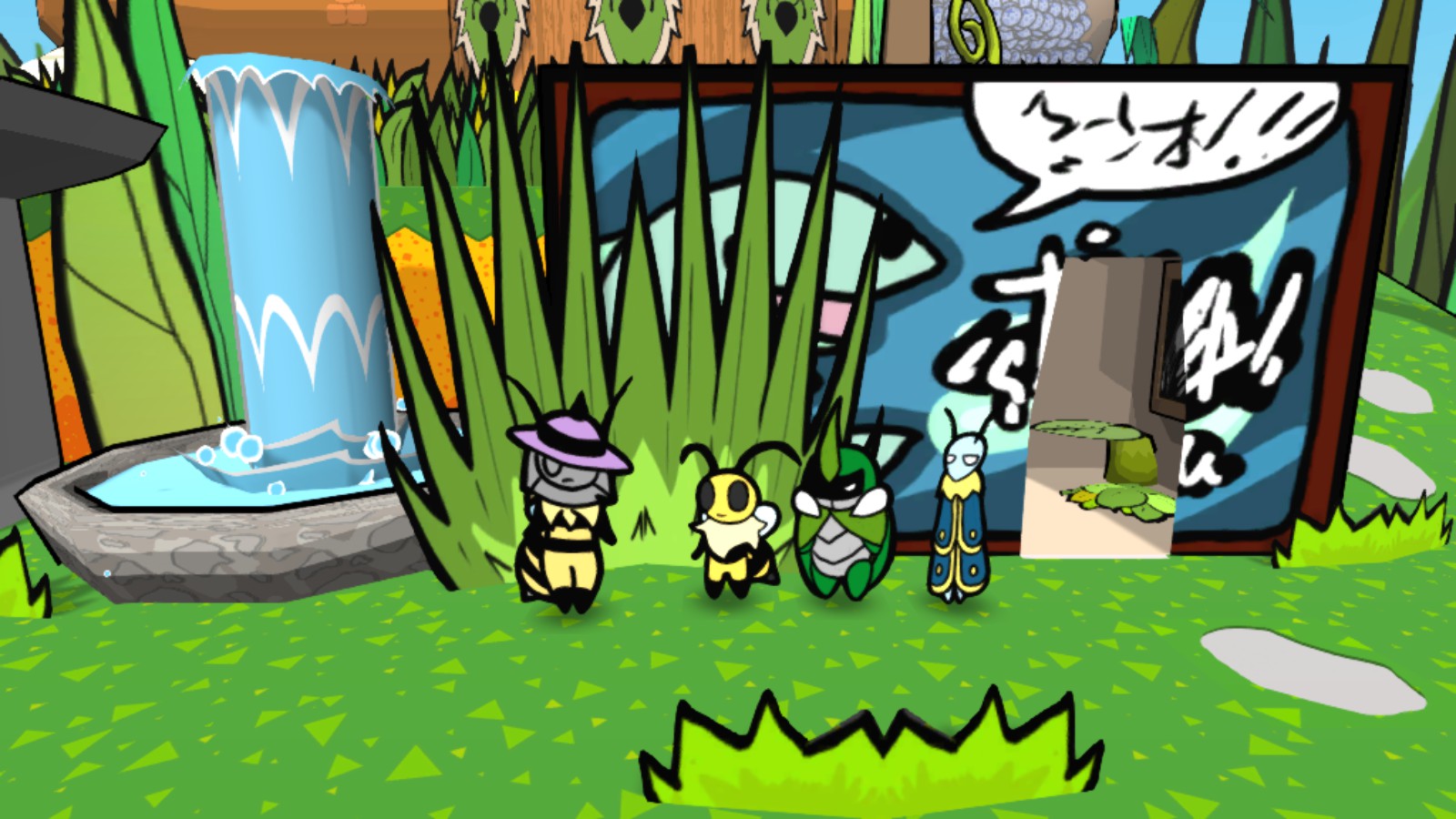 Bug Fables will not only bring you back to your fond Paper Mario memories through combat, but through the delightful art that makes up the world. While all environments are rendered in 3D, every character and enemy are in 2D with thick outlines to give them that paper feel and be easily spotted. Going into buildings will also cause a part of it to slide out so you can see inside better, which admittedly delighted me more than it should have been. Bug Fables also have some nice details sprinkled in if you look close enough, and I’m not just talking about lore related stuff. Of course, every character is some kind of bug so it’s not that surprising that grass and rocks are towering over you, but looking around that’s not all. You’ll see how items that we see every day being used to create buildings or tables, or even not bothered either by it being too much of a hassle to move or used as land markers to help travelers. You even see that the Ant Kingdom’s castle is, in fact, an anthill early on. There’s even a bug with a telescope that will let you look at the whole map to see for yourself (and confirm this suspicion). 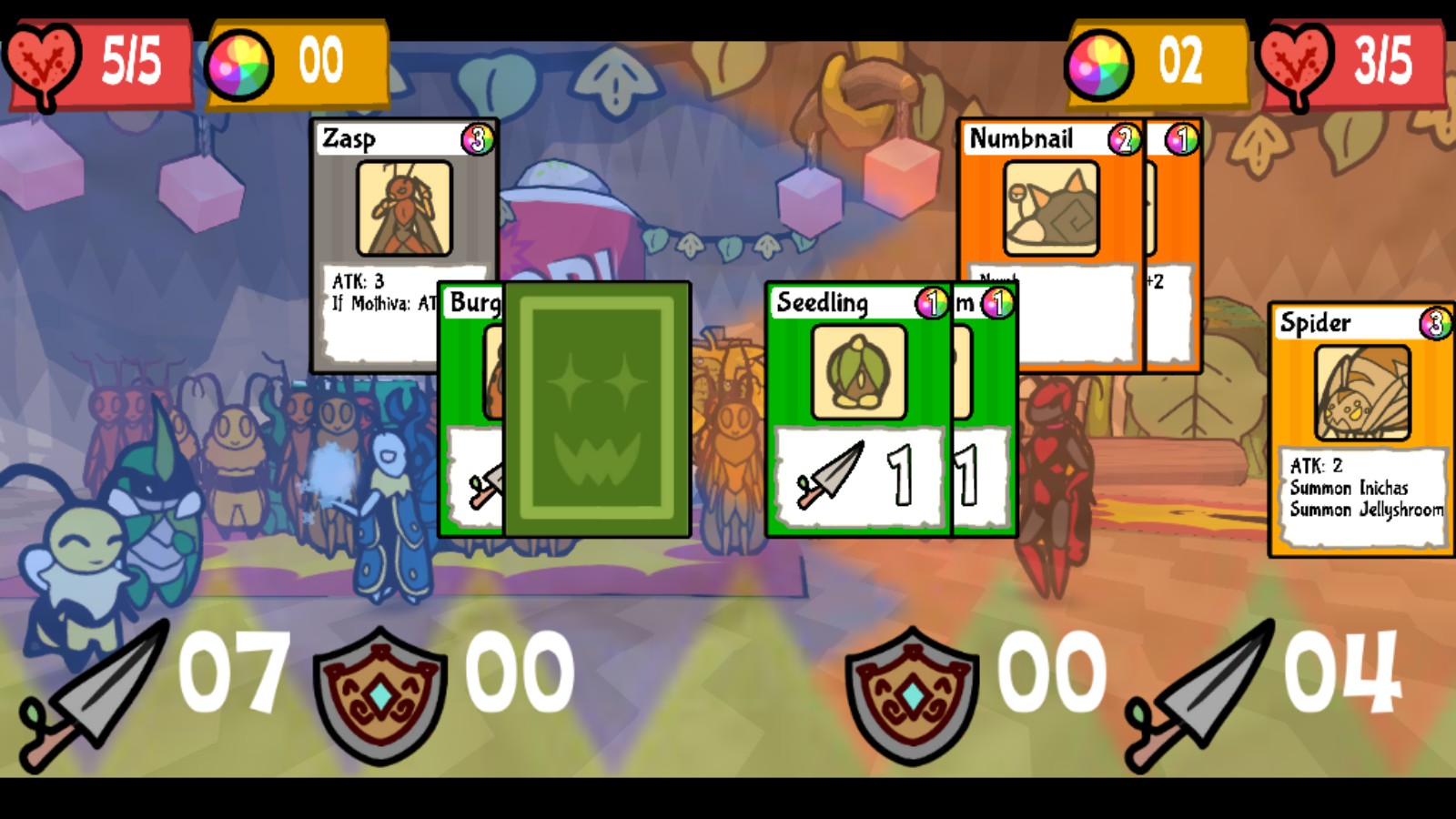 While I’ve never personally played Paper Mario, but played games that more or less have the same battle systems, I had a lot of fun with Bug Fables. You can really tell how much love was put into every aspect of the game from how the world is crafted to how they somehow made everything delightful to play (which may be because you’re rewarded all the way). Heck there’s even a card game you can play, with each card being a different enemy you gathered information on. One hour somehow feels like you only played for 10 minutes. Bug Fables truly earned the label of being a spiritual successor to Paper Mario and I highly recommend everyone interested to play it, even if you never played any Paper Mario games before.