A big, bland, almost empty world, hemmed in by overbearing fog and filled with repetition.

In Pine, the player takes the role of Hue, one of the game world’s few remaining humans, all living in treehouses growing on a high mountainside above the dangerous surrounding lowlands: The Out, as these areas are referred to by Hue’s tribe.

A disaster befalls the tribe and Hue ends up falling into The Out, where he meets a strange creature, but rather than attacking Hue, said creature instead helps him to return to his home, after explaining a very little about the world around them. Hue’s adventures in The Out, focused on his quest to find a new, less dangerous home for his tribe, form the core of the game. 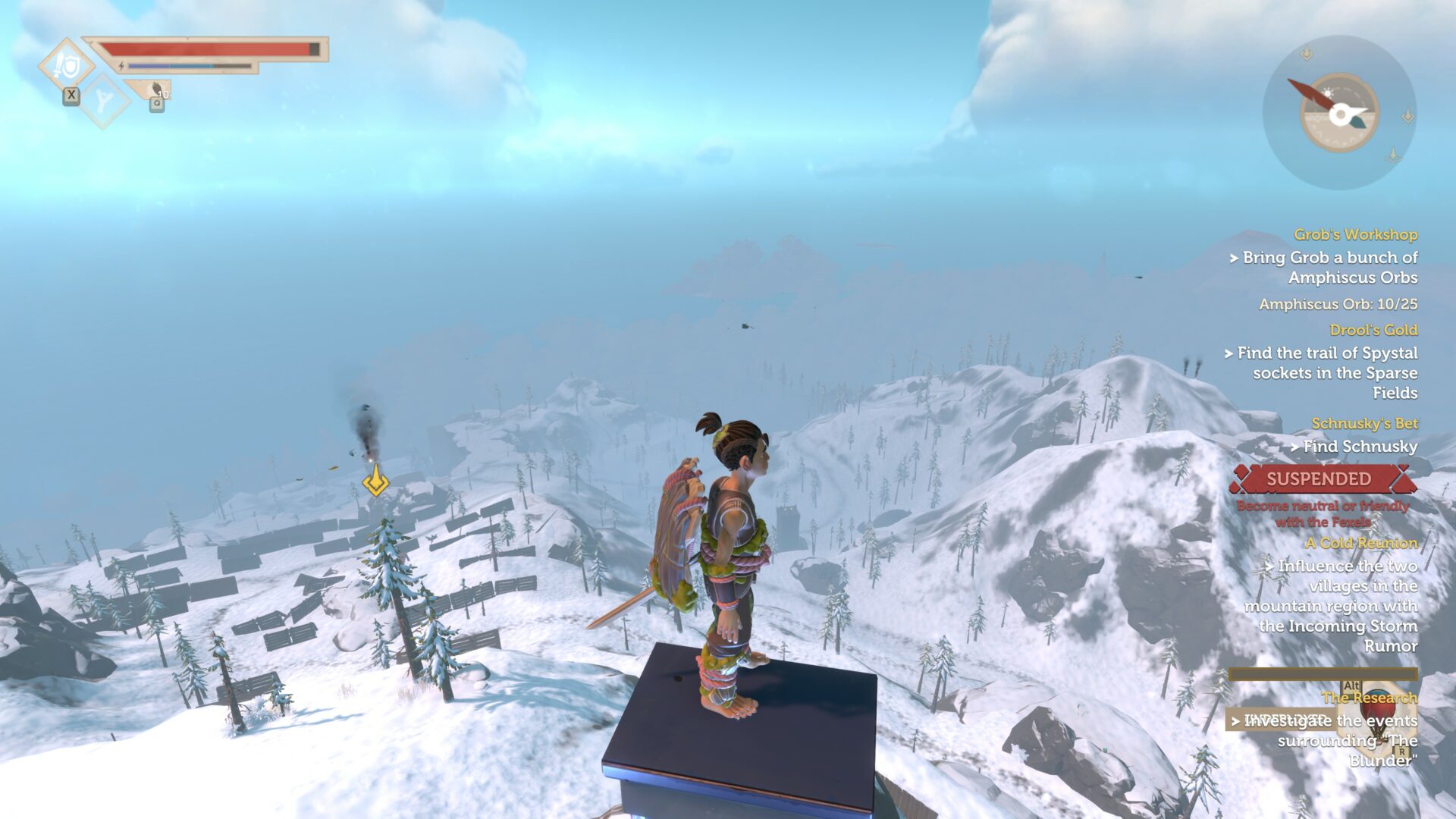 The whole game is cartoon-like. Characters initially look great, though the slight blue nimbus around them at times looks a little odd, but after a few minutes, I realized that their expressions are very limited in scope and range, and they all looked basically the same. Hue and his brother, Amam, could have been the same model, just slightly resized. Another of the tribe, too, looked deceptively similar, such that I thought it was Amam later in the game. 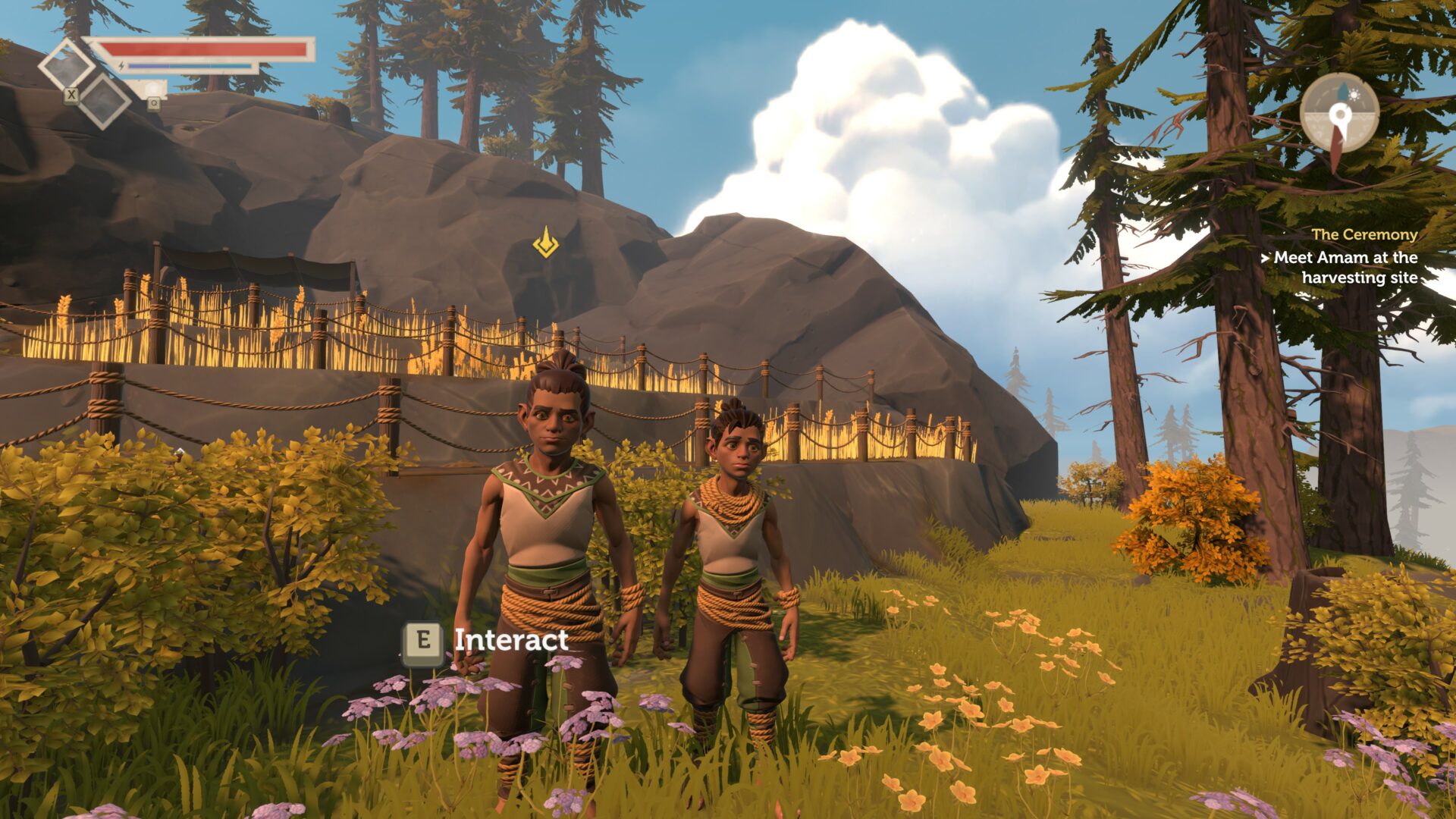 Fauna, flora, buildings, and so on, all look quite nice when you first see them, until you realize how much repetition there is in almost all of the world objects; while the different biomes definitely have a distinct feel to them, each instance of a given biome looks exactly the same as the others. The trees and foliage actually look quite nice — especially with the day/night cycle – based lighting, though there are no weather effects — but the textures are so bland that even when the shapes are interesting and varied, the final effect is much less impressive than it could have been. Characters of other races, too, are interesting the first few times you encounter them, but once again there’s too little variation, and every village and character of a given race starts to feel like a clone of every other.

This is all made so much worse, too, by the ever-present distance-based fog, which limits the camera’s view to what seems like a frightfully small distance — certainly much shorter than one would hope for a game that starts with the protagonist on a mountainside. And that’s further compounded by severe pop-in and some major clipping issues as well. My first glimpse over The Out from Hue’s home was rather disappointing; I can only assume the developers limited the vision range so much due to performance issues since the game exhibits those sporadically even now. The wide-open vistas I’d expected to see instead feel small and claustrophobic, and completely unconvincing. It could definitely do with some graphical optimization. 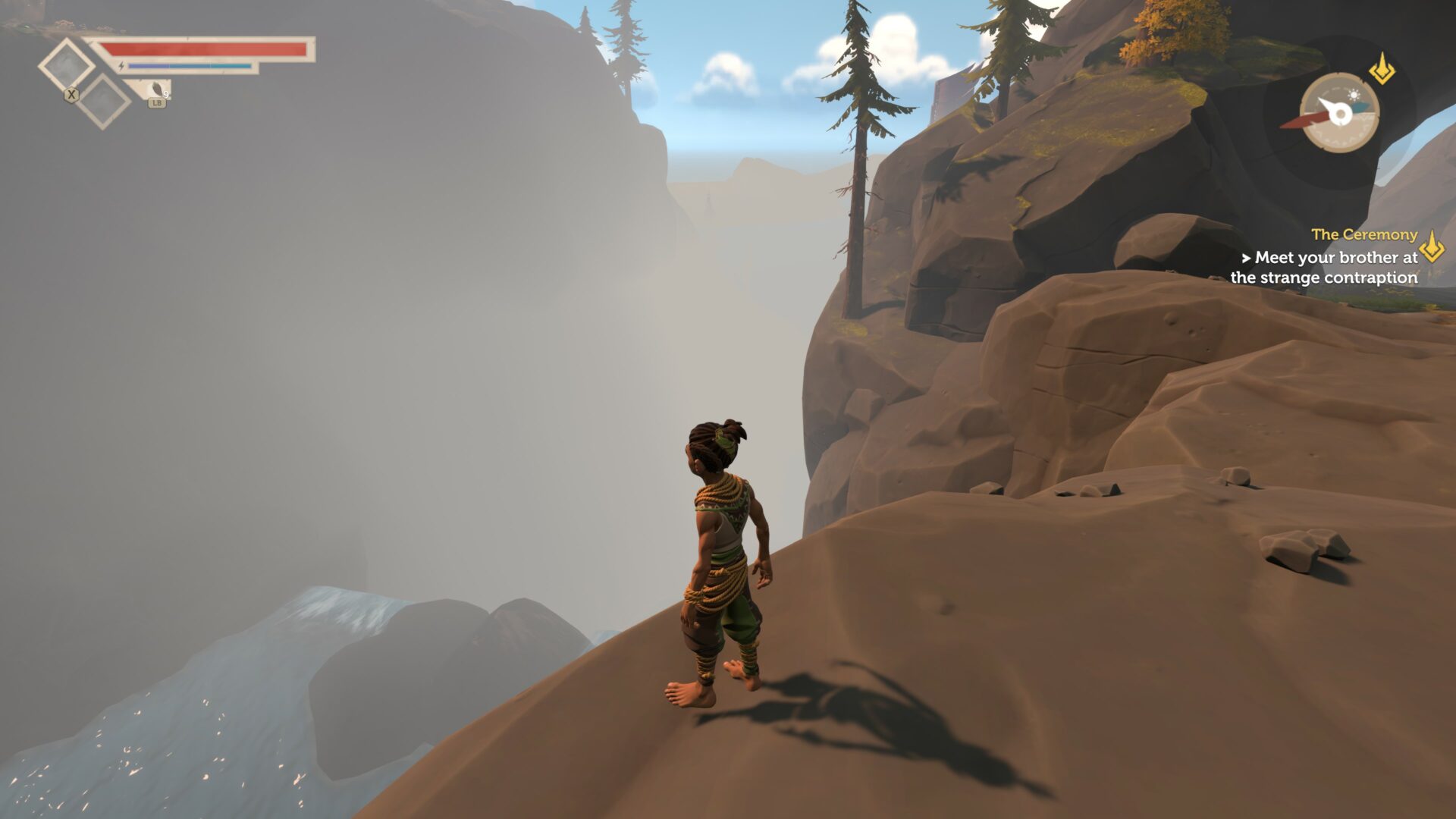 My second disappointment with the game was with the gameplay itself. Core gameplay in Pine is not quite what I was expecting; rather than an involving open-world action RPG set in an interesting fantasy world, instead it’s a shallow, rather bland open-world action/puzzle platformer, with some small amount of crafting and pointless survival elements. 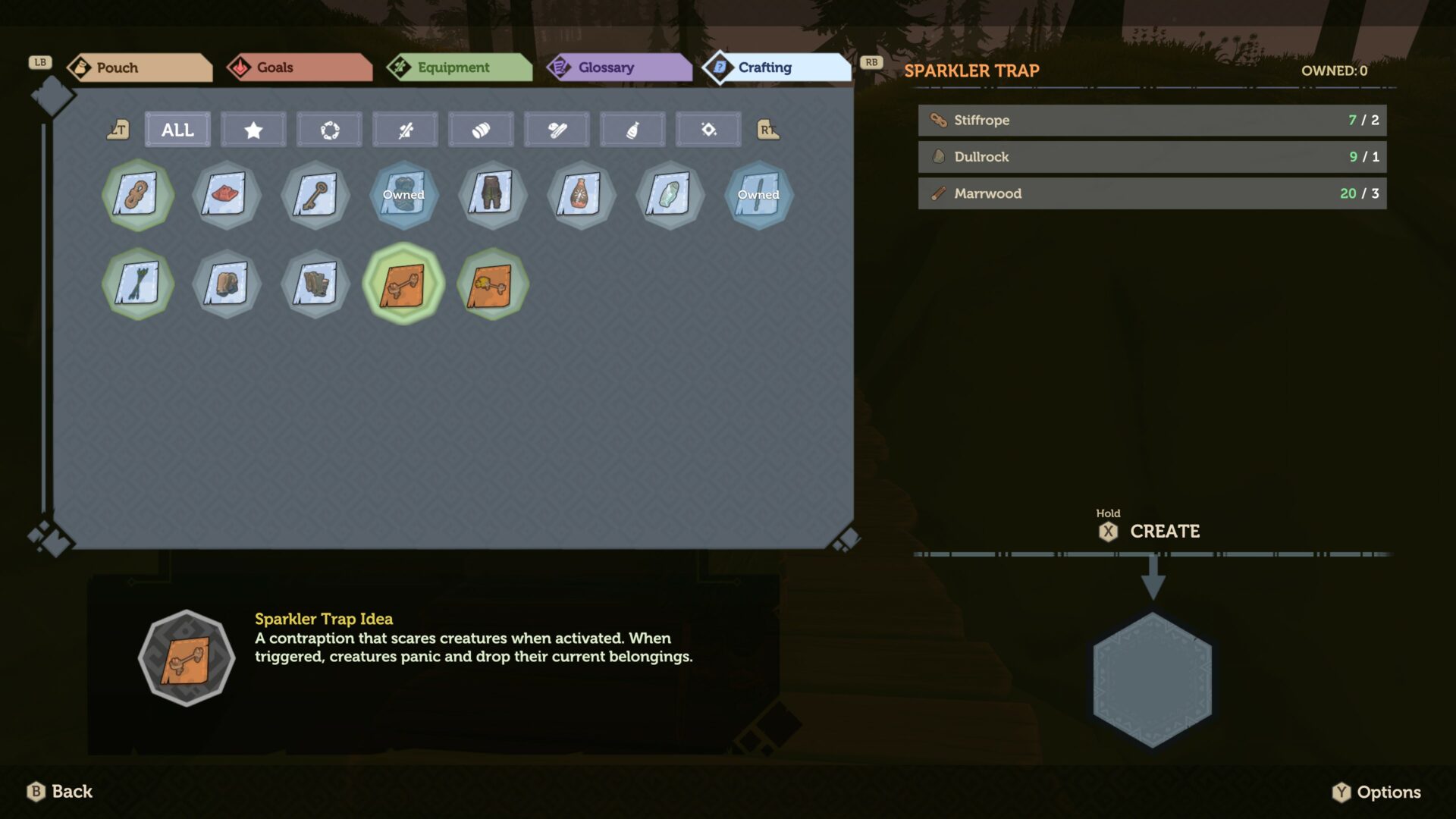 I feel a bit harsh saying that, but everything I’ve gone to do in Pine has been met with disappointment. There’s no RPG-style progression, so if you’re expecting any depth in character development, you’d better go somewhere else. The touted bartering, trading, and crafting systems are effectively limited to wandering about grinding the slowly-respawning resource nodes (or cheating by locating a good source and then harvesting, saving, loading, harvesting, saving, etc, until your tiny inventory is full), then wandering across the large and very empty map to get to your desired trading partner, then donating all your stuff until they like you enough to trade, and then finally trading.

The game’s main story is a series of quests, but these basically amount to glorified fetch quests, that are ultimately the same as the trading system I just described. This means that you’ll spend most of the game wandering aimlessly across the mostly empty map until you find the resources you need, crafting what you need, then wandering back across the map to get to the village that needs that thing, then making them happy with you by donating everything else you have, before finally giving them the thing you crafted. It gets old, fast. 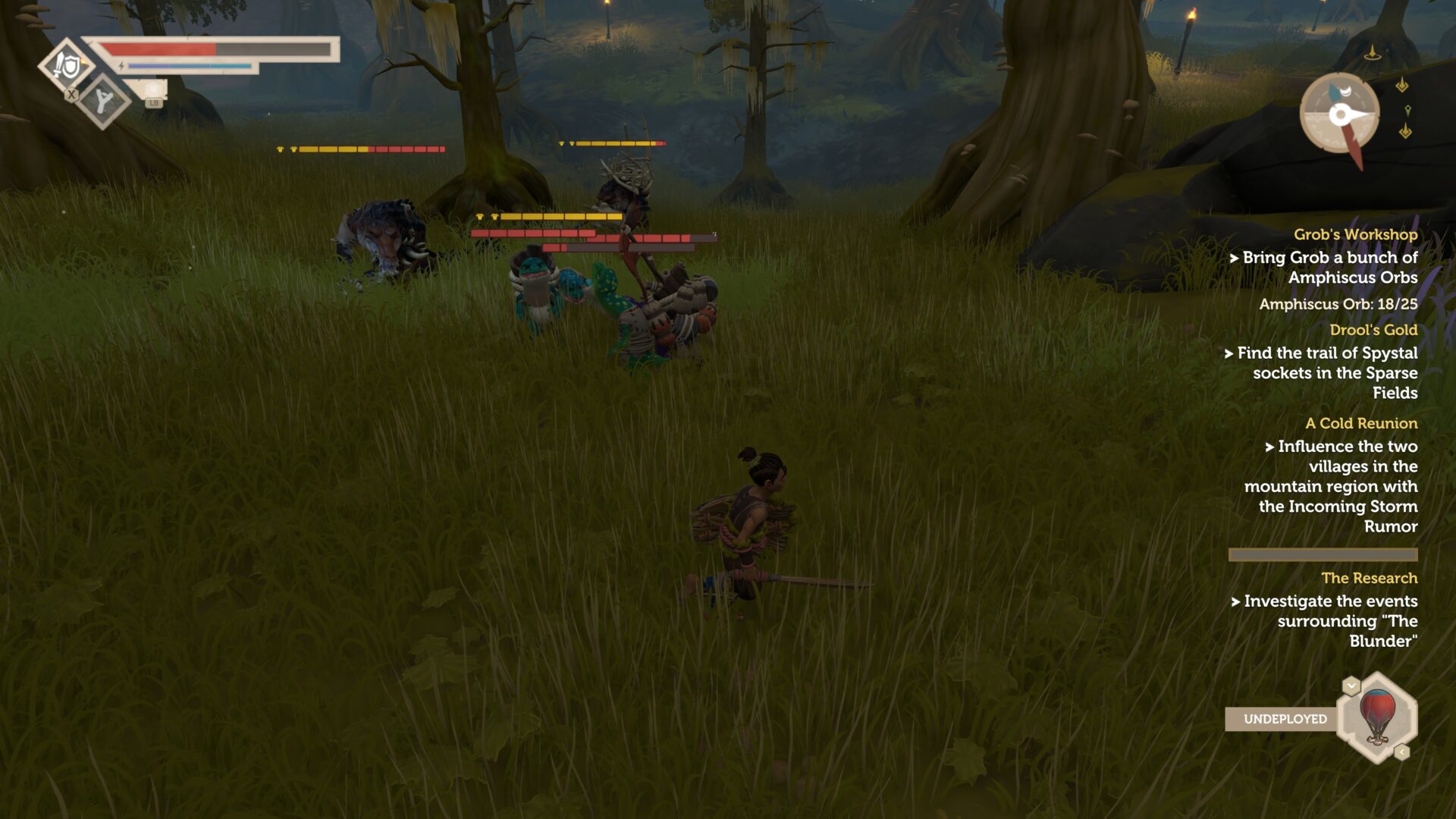 If the combat system were rewarding then it wouldn’t be so bad, but it’s not. Hit detection is wonky, Hue’s available actions are severely limited, and each battle feels the same as the previous. After the first couple of battles it becomes a chore that, unless your current quest requires you to engage, is simply much faster and easier to avoid by running away instead. Similarly, if the platforming and puzzles were more rewarding then it also wouldn’t be quite so bad, but instead the slippery terrain collisions, unresponsive controls, unreliable save system and occasional scripting/trigger issues make these sections painful as well.

The game has endless busy work. That can work quite well in a true survival-crafting-exploration game, where you gradually build up your abilities and resources and conquer the world, or at least make your place in it, but even in that sort of game one has to be careful to balance the grind against the reward. Is Pine it just feels like spinning your wheels. The main quest involves backtracking across broad expanses of the map in order to find countless resources just to give them to others, or craft something to give to them, with no real feeling of reward or achievement apart from letting you proceed to the next quest and do the same thing again. 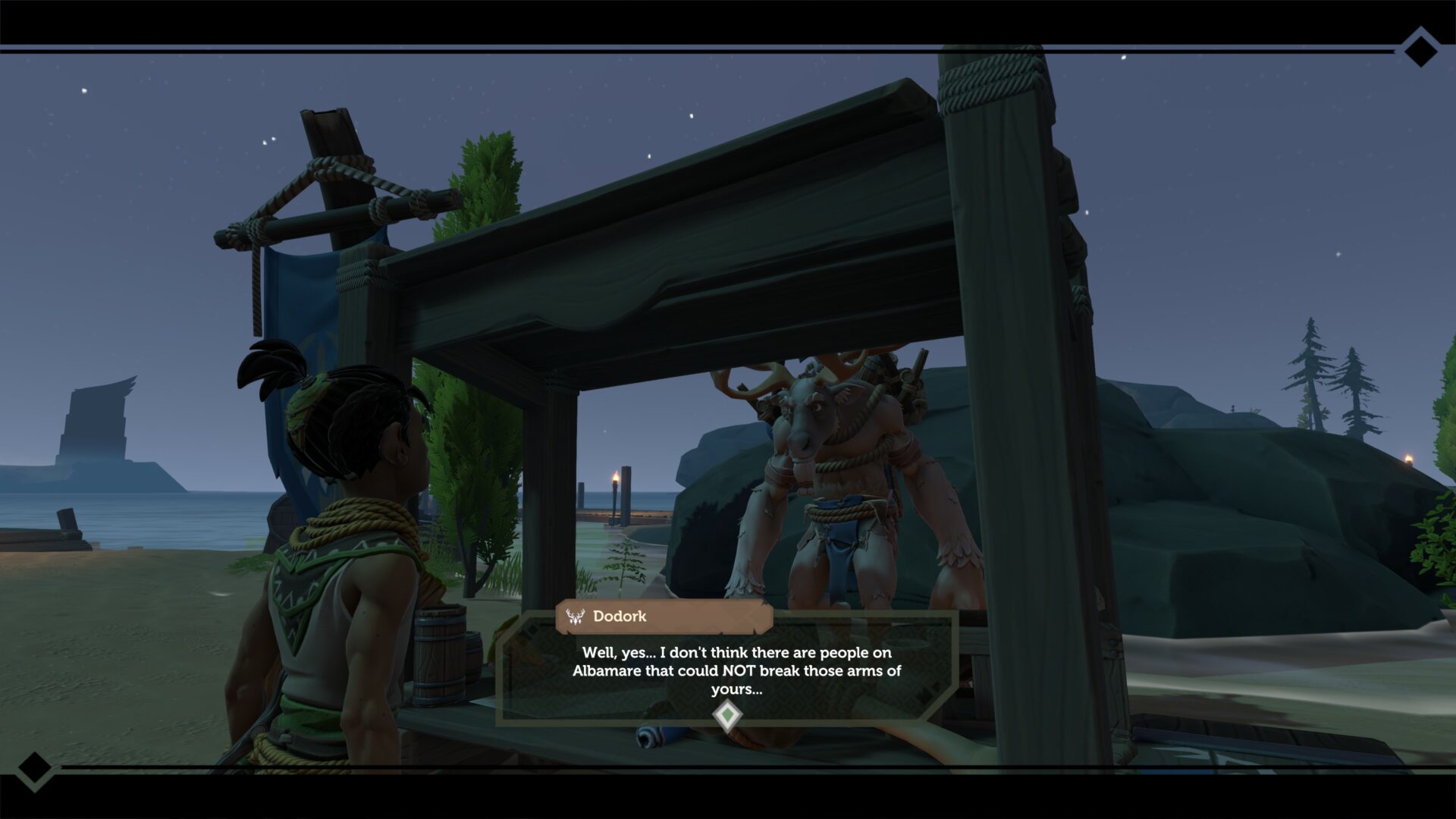 The survival mechanic — the continual energy loss that is supposed to make you need to find food for Hue to eat — is completely pointless. It’s done no more than provide a minor inconvenience to me when I’m sprinting across the world for minutes on end. It should be removed or replaced with a fast-moving vehicle or mount who has to be kept fed instead; at least that would provide some reward.

Even the faction system, which could have been quite interesting with the different NPC races and their villages forming alliances or declaring war, ends up feeling shallow and all but irrelevant. The races all behave the same, so I ended up simply not caring who it was I was dealing with for any particular quest: just give them my best stuff until they stop attacking me and then move on to the next quest. Another missed opportunity! 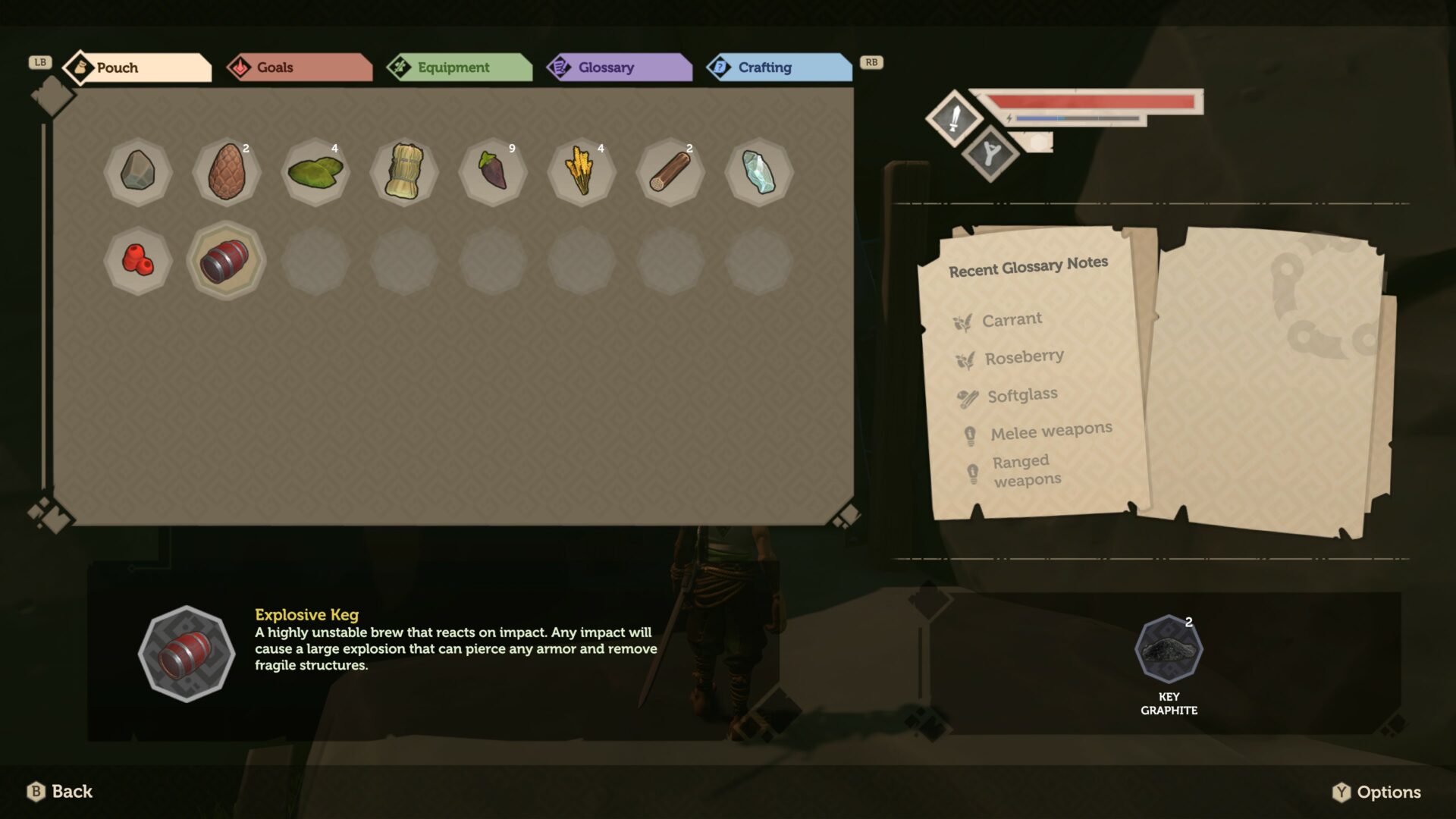 I’ve really tried to get into Pine, but I’m just not enjoying it.

The world is interesting on the surface, but rather empty, and with too little variation to hold that interest long. While it has some personality in places, it’s too sparsely populated with not enough character, creature, and object templates. The repetitive nature of the quests, uninspiring main gameplay loop, and completely unrewarding combat and platforming sections make the game feel like a chore, made considerably worse by the limited inventory space and continual backtracking. The graphics are quite nice at times, but again are ruined by repetition, as well as some performance issues and an overuse of distance-based fog.

Pine is bland, repetitive, and frustrating. I expected so much more!