REVIEW: Blood Will Be Spilled

Welcome to Wild West, but with a twist

There is quite a number of games set in the Wild West, but this time round the Wild West we delve into is a little different. We still have the iconic rocky deserts, chill saloons, six shooters, casinos, and cowboy hats, but instead of people, this Wild West is populated by bugs. Not computer bugs that is. Real, creepy-crawly type of bugs. All characters in this setting are anthropomorphic bugs – beetles, bees, praying mantis, grasshopper, and of course the main hero Jack, who is a mosquito and likes to drink blood.

The gameplay here consists of several parts. At the heart of it are the tactical turn-based battles. In between the fights during the missions we do some platforming. And outside missions we walk around the town hub area, chat with the NPCs, buy new weapons, and prepare for the next mission.

The whole game is a 2D sidescroller, so the fights and the platforming are all done in 2D. The fights are very reminiscent of the ones in games like Steamworld Heist or the Worms series. You get to manually aim your shots and you can take cover which protects you from enemy gunfire. You get two actions each turn, which is something that’s quite common to most tactics-based games. You can spend those two actions on moving around, on shooting, or on using items or abilities. 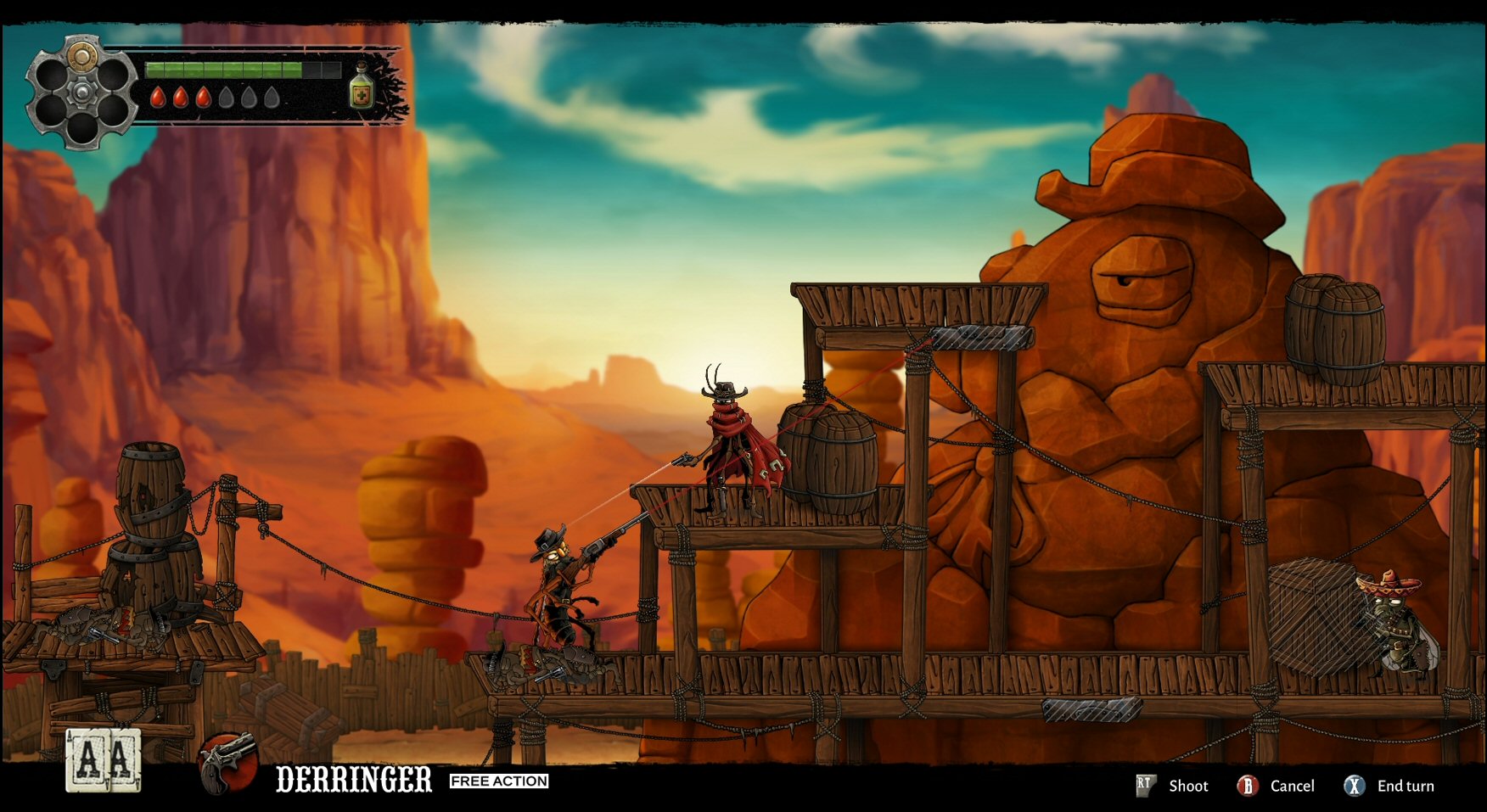 It’s a really fun combat system overall. Although in the majority of the fights you’re by yourself having to face all the enemies, which could make some of the fights feel like they drag out a bit or that there aren’t many strategies to use. After all, one of the things that makes other turn-based tactics games shine, ranging from Steamworld Heist all the way to X-COM and Hard West, is the party synergy – using more than one character to work together to create an interesting offensive or defensive tactic, which sadly we don’t get to do a lot of the time here.

There are only a few instances, mainly towards the second half of the game, when we get to team up with one or two allies, and those parts I thought were much more interesting. In fact, the last couple of missions, when we have both of our allies with us, I thought were the best, because we really got to make use of 3 characters and utilize special abilities of all of them. 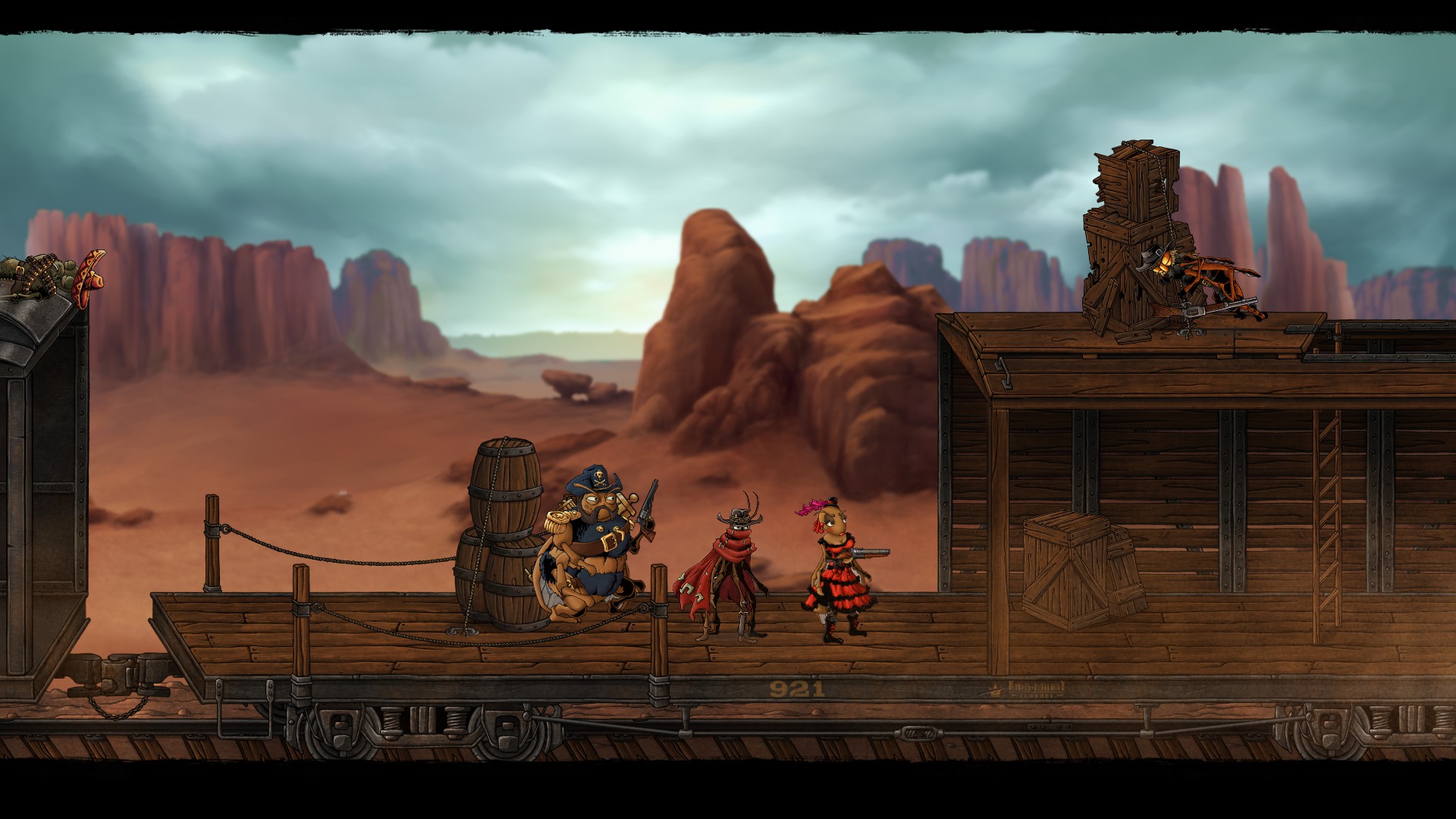 Despite the slight disappointment in not getting to use other allies quite as much, even the combat sections where it’s just Jack on his own were still pretty fun and engaging. Each time we have a new place to battle and need to familiarise ourselves with it. And with each mission or two, we get new enemies being introduced, which increases the challenge and does it at a nice, steady pace.

The game also has some character progression, or the phrase many are looking for me to say – RPG elements. Our character Jack can follow one of the three upgrade paths, fittingly named The Good, The Bad, and The Ugly. Each one offers its own unique skills. For example, the path I chose, The Good, concentrates on gun-related skills. It had an ability that improved accuracy, an ability that allowed you to bounce a bullet off the hard surfaces to hit unreachable enemies, and even an ability to shoot from a derringer gun as a free action that doesn’t use up your action points in a turn. There are only 5 skills for each upgrade path though and you can expect to level everything up fully by the end of the game. Still, having 3 completely separate upgrade paths is a nice way to add replayability. 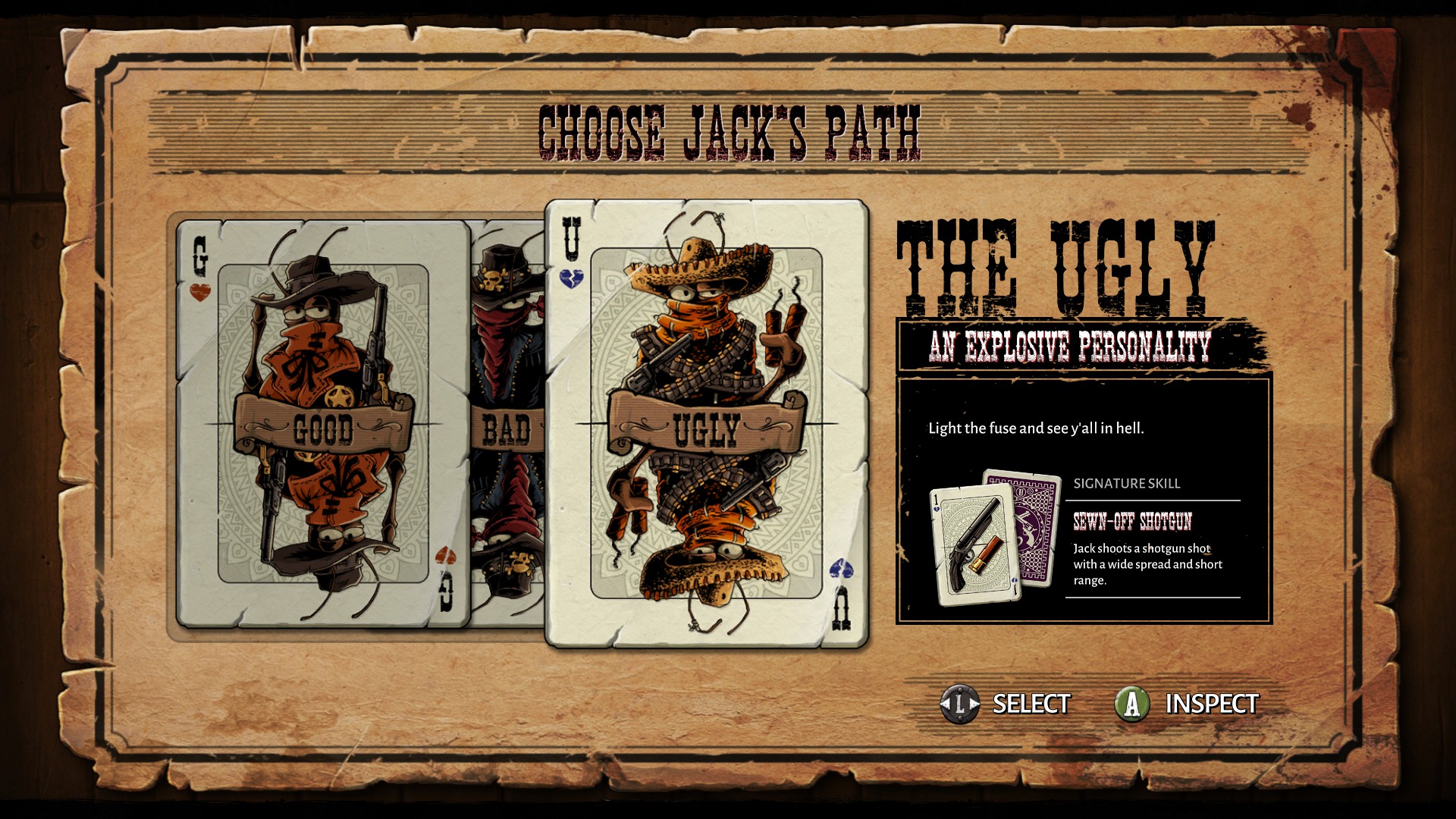 The special abilities use up blood points. Think of them as mana points that many other games have. We get them rewarded to us at the end of each battle, but we can also get extra blood by sucking them from enemies up close. Our character is a mosquito, remember?

The platforming parts of the game, for the most part, are ok. Can’t say they are particularly thrilling, but not bad either. They mainly serve as a way to change the pacing between the combat sections so that we don’t just fight battle after battle the whole time. Some parts are kind of challenging, such as needing to move quickly because the platforms are crumbling under our feet or because someone is shooting in our direction from afar or because we are being chased by a big ass spider who wants to have us for dinner. So, expect some of the platforming sections to keep you on your toes as well.

The Story and Setting

One of the aspects this game does really well is with its world-building, story, and character development. It is somewhat rare for games that focus so much on delivering a neat tactical combat system also to be giving a lot of attention to the story. Most times the story in those games serves just as a supplement to the gameplay, but in ‘Blood Will Be Spilled’ it can stand strong even on its own.

As mentioned earlier, the setting is already pretty creative in the way it has anthropomorphic bugs populate the Wild West instead of regular people. And their character and/or special abilities are often fitting to the theme of what type of insect they are. For example, one of our allies, the saloon owner lady named Queen, is a bee, and she has bee and honey related abilities, as well as also saying ‘Don’t stop me now’ at times in combat (paying tribute to a popular band of the same name as her). In fact, the naming of characters seems to have been chosen in an interesting way. Some seem to have names related to cards – Jack, Queen, King, and Ace are all names of characters in the game. 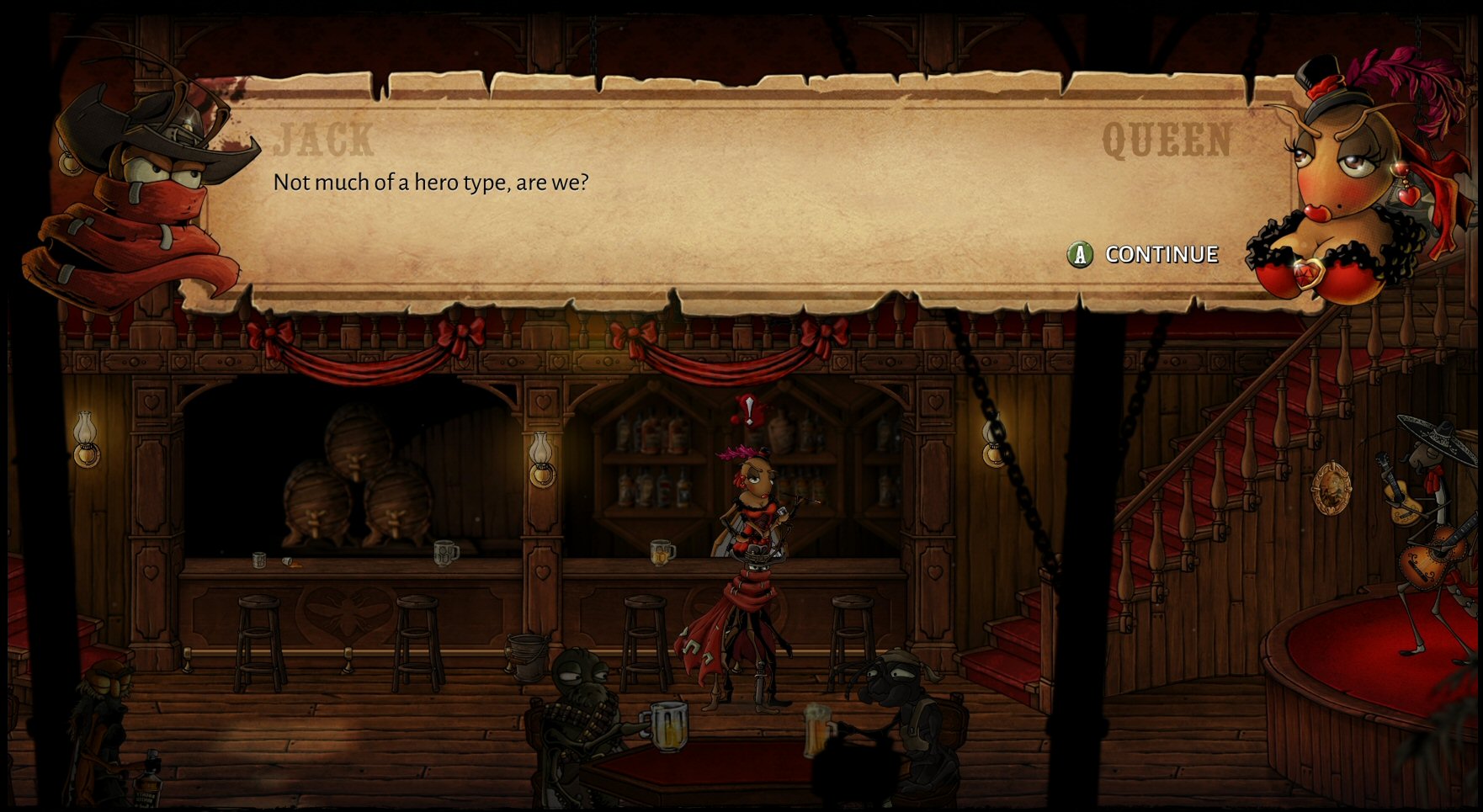 There are also some interesting NPCs in the town hub area, such as the praying mantis priest and the grasshopper undertaker. You can chat to both of them every time you visit the town hub location in between missions, and they often have new dialogue, with the priest persuading you to be merciful while the undertaker enjoying his work of burying the dead and encouraging you to go out and kill more criminals. You can also chat to the bad guys in the jail if you’ve decided to capture them alive rather than to kill them, and they have rather funny dialogues, especially when they argue with each other of who is more incompetent. 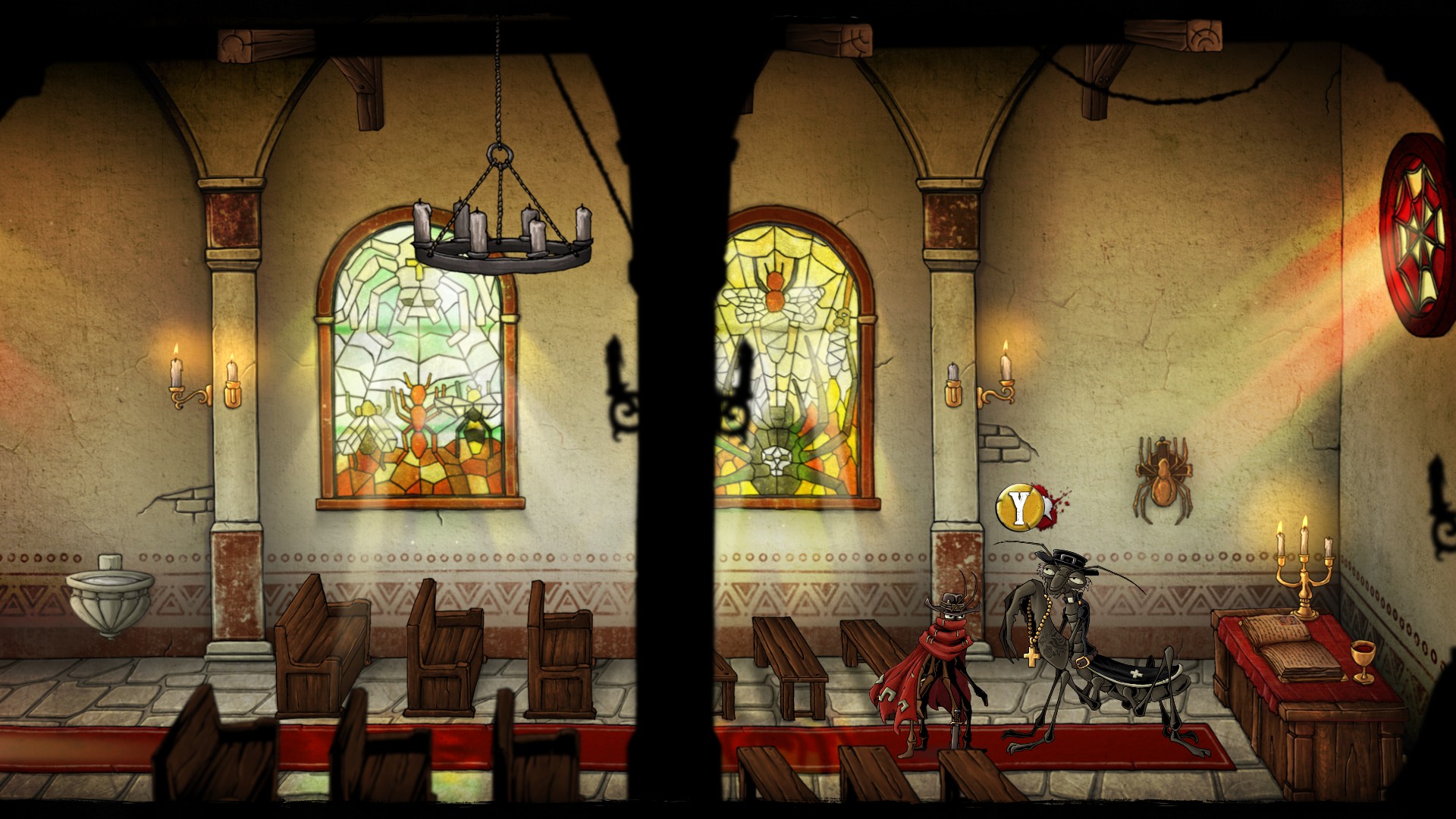 About that last point, each time you defeat one of the villains that Jack is after, you get a choice of whether to capture them alive and put them in jail or simply to put a bullet in their head and be done with them. This doesn’t seem to have too much of an effect on the story. Rather you just get different responses from NPCs about your choice (and being able to talk to the villains in jail if you’ve captured them).

The story on the surface might have a simple formula of revenge – Jack hunting down the members of a notorious gang, all of whom have betrayed him in the past. But, there are other interesting developments in the story in addition to a simple revenge plot, which kept it interesting throughout. Many of the story-related cutscenes are shown as nicely-drawn comic strips too, so a lot of love was given to them.

The whole game is presented in a nice art style. All characters, environments, and backgrounds have a sort of comic book hand-drawn style. It looks great and makes the setting look alive and believable. The UI is also nice. Menus are easy to navigate through and all information is clearly presented to the player. Although choosing your movement route during combat can be a bit fiddly because the pathway lines are a bit thin, and when you scroll the map, the movement lines get selected as well. In essence, you are not choosing a spot to go to and the character then decides the shortest route to get there (as with most turn-based tactics games). Instead, you have to decide the exact route for them to take. 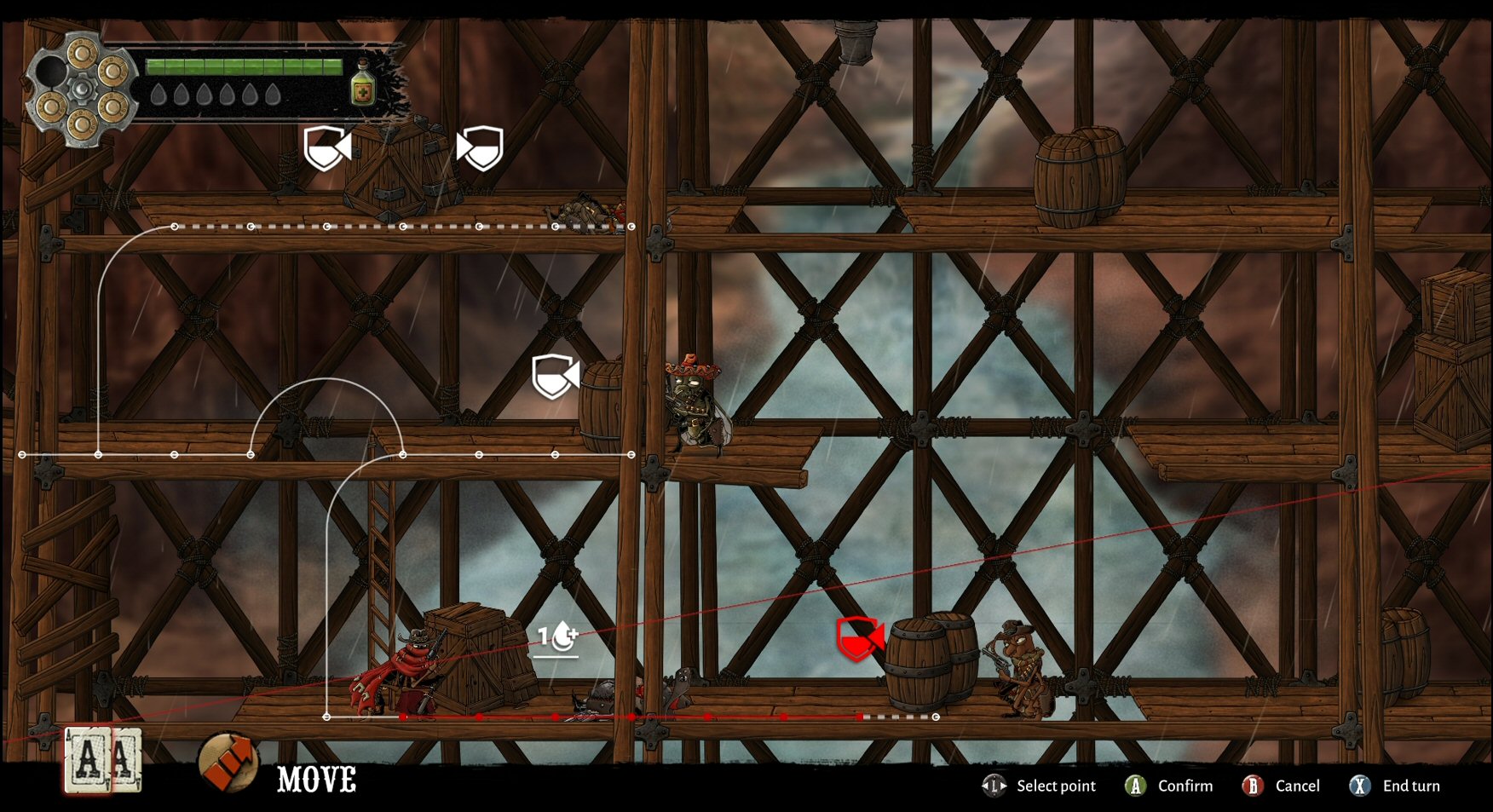 The music is pretty nice and chill for most of the game. Won’t say it was particularly amazing, but it does its job at creating a Wild West atmosphere, and some of the battle tracks were pretty nice and heroic-sounding.

The voice acting is very good. All the main and supporting characters, as well as enemies we fight, have voice acting, and I think each character was voiced very well. There weren’t any that were out of place or of lower quality. The voice of the main character Jack is very recognizable, and that is because he is voiced by the same voice actor who did the voice of Adam Jensen from the newer Deus Ex games, and his voice fits the character, Jack, quite perfectly, who, just like Adam Jensen from DX, is also a cynical loner with a brutal efficiency when it comes to fighting.

One issue that has been this game’s worst arch-nemesis are the bugs. No, this time I am not talking about insects. This time I mean computer software bugs. According to the forum posts and reviews, the game was pretty buggy at release, back in May of this year. However, vast majority of those bugs have been fixed by the devs since then. I’ve only come across a small handful of them when I was playing and they weren’t particularly game-breaking or anything (and they should be fixed soon as they were all reported to the devs). The devs are clearly passionate about this game and have done a lot of work to iron out any bugs it has. 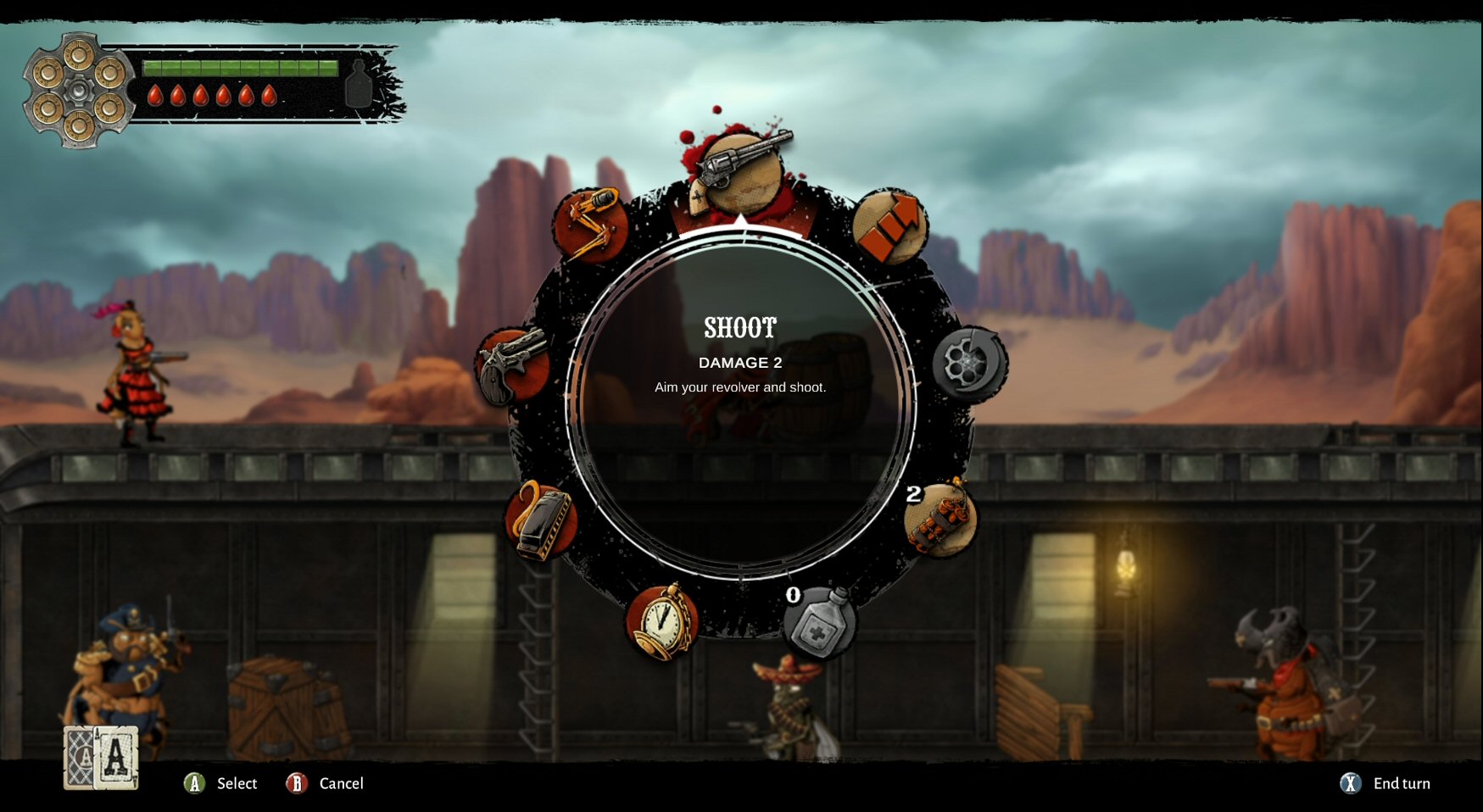 ‘Blood Will Be Spilled’ is a pretty underrated gem that manages to deliver both on gameplay and on story. As far as gameplay, it might not surpass other tactics-based games, but it does a great job holding a candle to them. And as far as story, it gives us a finely crafted setting, interesting characters, and a nicely-paced plotline, all of which I am hoping we’ll see again, as this game has left some room for a possible sequel. If you’ve enjoyed other tactics-based games with a Wild Western flare, such as Steamworld Heist and Hard West, then give this one a try too.

It’s a bit slow to start off and get going, and some of its aspects, such as the platforming sections, are nothing special, but the turn-based tactical combat and the engaging story make up for it.

It’s still a little rough around the edges, but the majority of its bugs have been fixed since release. Unfortunately its rocky release has caused it to acquire mixed reviews on Steam in the first few weeks, and now it’s flying completely under the radar of Steam’s algorithm. Great if you’re a stealthy mosquito mercenary. Not so great if you’re a nice indie game made by a small but highly passionate team of developers. By now, it’s very well worth checking out.