Travis actually strikes for the first time on PC and it’s a solid entry.

A No More Heroes game on PC. 12 years later. Is there a better time to be alive?

Okay, I know it’s not one of the “main” ones, but Travis Strikes Again is a good entry to the series and a welcome addition to the PC gaming scene – a fun and relatively mindless game with plenty of content (being a complete edition with a substantial amount of DLC content included) that can end up being a bit too repetitive for some, hurting its overall value, especially at a quite (too) steep price tag.

The story is actually solid, more for the writing and the wacky characters than the story itself which is quite contained and simple. Playing as Travis Touchdown, a retired assassin spending his time playing video games, you are targeted by Bad Man, a father avenging his murdered daughter (by Travis’ hands). During the encounter, a common goal is established between them as they set out on an adventure around the world to find 6 death balls – game cartridges for a hyper-realistic game console called “Death Drive MK II”, which will be the game’s chapters, each with its own theme, dialogue and boss.

The writing is witty and funny at times, often breaking the 4th wall and targeting you, the player, as a subject of the conversation. The dialogue is great and helps carry a simplistic and basic plot into a better dimension.

Most of the dialogue happens through a chat log interaction between characters, much like Metal Gear Solid 3 or Resident Evil 4, for example. The little to no voice acting helps a bit in making the writing shine more instead of possibly being ruined by poor voice acting.

The game has a nice attention to detail by referencing multiple media including Suda51’s other games, such as Killer is Dead. The humor isn’t for everyone but for each toilet humor or cringey humor piece, a well-written sequence of dialogue exists to counter it and ends up feeling like a fun ride overall where some jokes fall flat (Having a “Save” prompt hiding Travis’ junk while he’s in the toilet is funny for the first 2 or so times and not every time you want to save you game progress).

While the meat of the game, it’s also the biggest flaw. The gist of the gameplay is hard to describe due to the game’s themes allowing for various gameplay mechanics to be introduced. The core is a hack n’ slash experience, with light and heavy attacks and a combo mapping allowing you to activate 4 out of all the abilities you can find while playing, whether they are in secrets or as quest rewards.

Other mechanics may be introduced and are exclusive to each “game” (or chapter) you play. One will have a sliding puzzle to interact and progress through the level, another will have a motorcycle racing minigame, and so on…

These minigames and puzzles do help mitigate the repetitiveness of the combat but when roughly 70-80% of your gameplay is mashing 2 buttons, repetition will start hitting hard after a few hours of play. The combat itself is very simple… too simple, by light or heavy-attacking, you’ll just tear through enemies easily with the occasional dodge and repeat attack combo being performed or harder enemies. This two-button gameplay is done most of the game with the occasional ability cast which does little to nothing in breaking the repetitiveness of the combat. 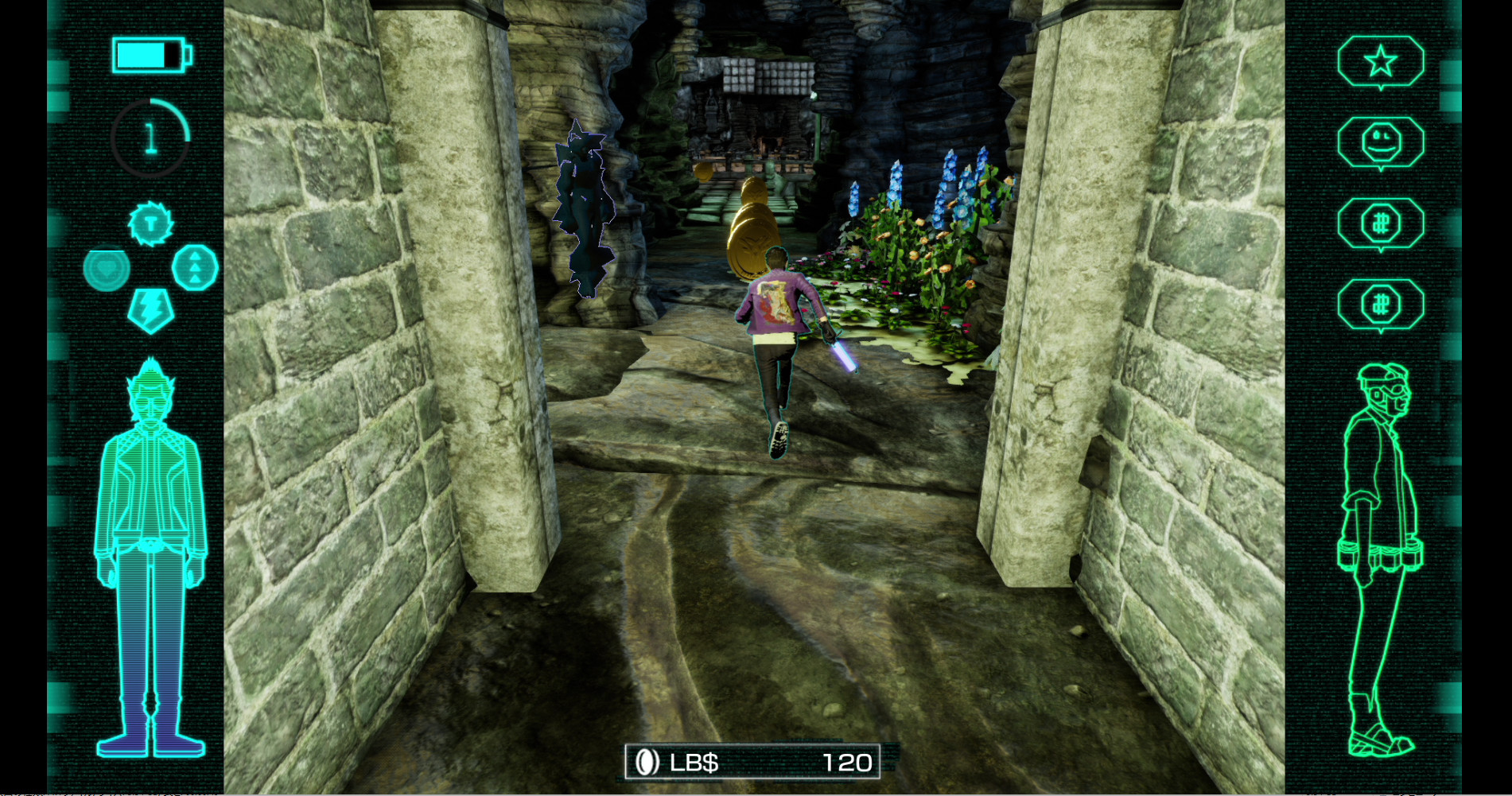 The combat is still very fun, but the fact that every combat scenario feels the exact same makes the game the most fun when in short bursts unlike the previous No More Heroes games or other games in the genre. The fact that the enemies also look rather generic and similar between each other doesn’t help the combat feel fresh at any point during the extensive button mashing you’ll be doing by the end of the game. The game is fun to play overall and lasts a full playthrough without wearing on you, but New Game + and further playthroughs are severely hurt by the game’s overall repetitive and overly simple combat.

After combat, XP is given to you, where you can then choose to give to Bad Man or Travis (both playable and with very small nuances that make them statistically different from one another) in order to level them up, improving their damage and health, easing the combat as you go along. It’s a very simple level up system that sadly makes the game far TOO EASY on its maximum difficulty, especially if you have minor collectible OCD such as myself and end up finding/unlocking most of the abilities and having a massively broken, near invincible combat “build”. 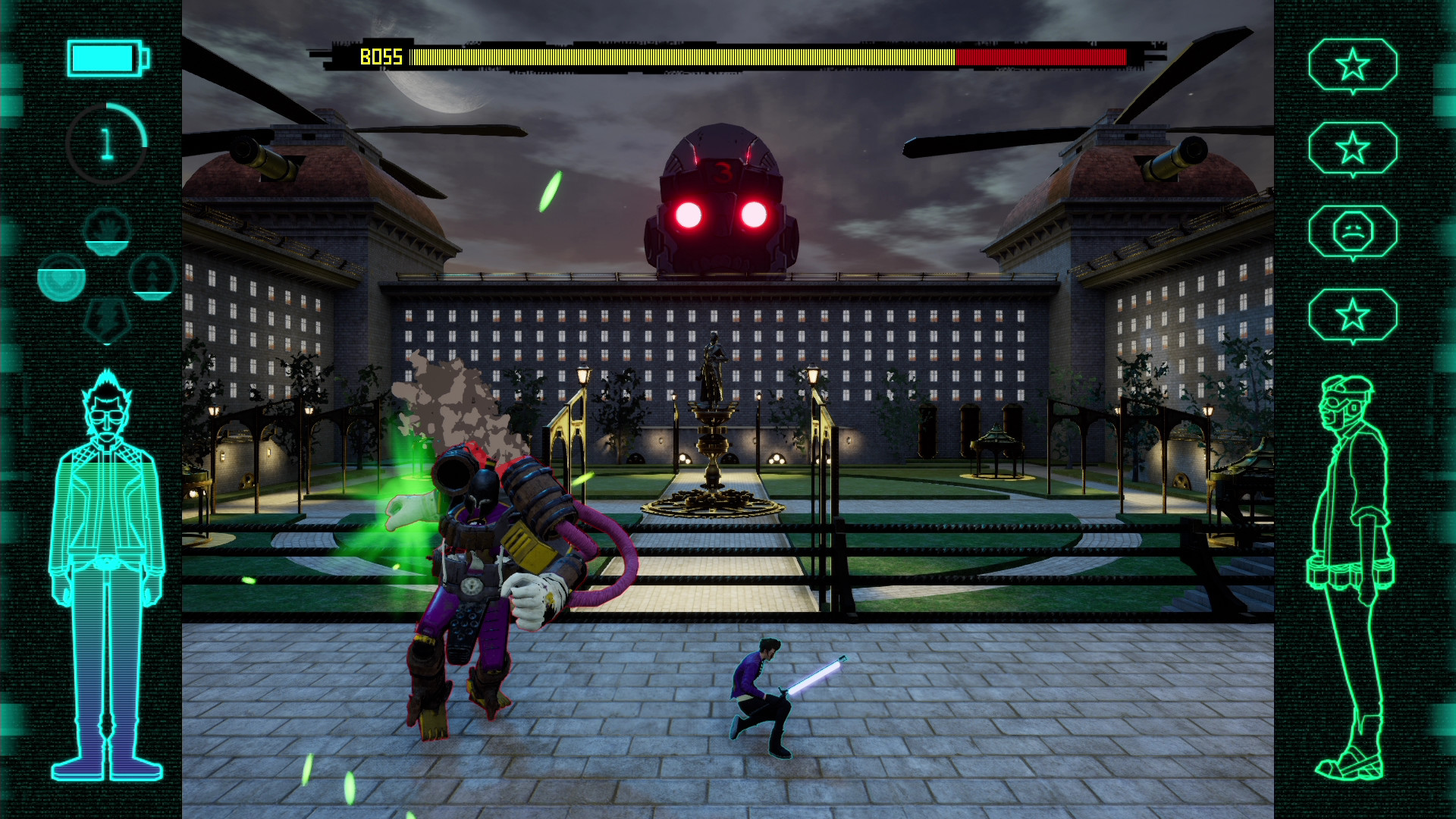 The game also features some smaller side quests such as rescuing your cat, Jeanie from a random place in the chapter you just completed or collecting items such as T-Shirts you can equip on Travis (with A LOT of T-Shirts belonging to great indie games, alot of them from Devolver Digital, a publisher that also gets a couple of funny mentions by Travis) or Ramen Blogs, where you can collect throughout the game various Ramen recipes. Alot of this sounds pretty crazy (and it is) but it works and helps break the game’s monotony resulting from its above-mentioned repetitive combat thanks to the crazy ideas and mechanics the game keeps throwing at you, on top of a really over-the-top script.

The game’s DLC (which are included for free) feature 2 new playable characters and a few chapters extra and are overall great value added to the package, helping the asking price of 34,99€ feel a bit more digestible.

There is barely any voice acting so I can’t discuss much about that. Despite this fact, the soundtrack has gotten some deserving care and is fantastic to listen to, whichever chapter you decide to play – it’s great to play the game to the tunes of the OST and it helps that all are relatively memorable and different from each other and not just 20 versions of a punk rock riff.

Sound design for the gameplay is also quite great and helps the combat feel great thanks to great collision sound effects, death sounds, ability effects, and so on – even picking up coins in the levels has a really satisfying, almost nostalgic sound effect.

Much like other Suda51’s games, Travis Strikes Again has a very distinct art style that helps it look unique but also really pretty. Running on the Unreal 4 Engine, the performance is nothing short of stellar, the graphics options leave a bit to be desired but given the game’s 2D perspective (and also top down depending on the levels/chapters you’re playing), there isn’t much to add to configure the game, the basic options are there and are more than enough, especially for a game running this well on my PC.

The UI is a hit and miss, however…

The game is played in whichever perspective it gives you at the time, but you’ll always have 2 black bars on each side, the left one showing Travis’ health, ability combo prompts, and charge level (something you use for a super attack, basically). On the right is Bad Man, which will probably look the same in case you play the game’s Local Co-Op mode (which I sadly did not get the chance to try for this review). It’s jarring to say the least that 2 black bars, taking away 20% of your screen just for a bit of information that could’ve been simplified into something far less obstructive.

As it is, the game can be offputting due to its weak UI which also extends into this particular PC Port – the main menu has all the prompts in the controller layout (I used a controller to play) except the one to leave to the menu, which is somehow mapped to F4 which is obviously not a button from the controller… these small mistakes and odd UI choices ultimately make the game feel like it could use some extra polish before release (the black bars is more of a design issue than a QA issue but it was still a criticism I wanted to point out, though it comes way back since the game’s first release on consoles and isn’t a new issue like the keyboard mapping issue I just pointed out).

While I can’t fully recommend Travis Strikes Again for everyone, much less at the asking price of 34,99€, it’s still a really good game worth buying for the good writing, fun and rather unique gameplay and the overall craziness of it all thanks to the mind of Sude51. Definitely keep an eye on this one of a future steam sale, it’s a fantastic purchase at 20-25€ or lower.