Applewood is 40% classic platformer, 40% a challenging puzzler, and 20% a spectacular bullet-hell, and 100% of it is an amazing and gratifying experience from start till the end.

It’s all about the apples

Ringo the Imp only had one wish, to live alone and in peace in a small village of Applewood with the other animals and enjoy the tasty apples. Unluckily for Ringo he is living in the world of video games where things always go south fast and furiously, but fortunately for us, we got quite an interesting game in the process. Trouble is brewing in the distance and the winds of changes are growing closer, forcing young Ringo to face his inner doubts and insurmountable foes as he embarks on the grand adventure. The story of Applewood is simple and straightforward, but it’s enchanting and gripping in the way it’s being told. It dips into light subjects such as wonder of discovery, the power of friendship, growing up, persevering all the hardships and making new friends. The game starts lite, chirpy and colorful, but it’s not afraid to, later on, move into darker and more serious topics of abandonment, psychological trauma, others relying on you and facing the consequences of your bad decisions. Applewood is surprising and breathless like that, which is the reason why I love this game. 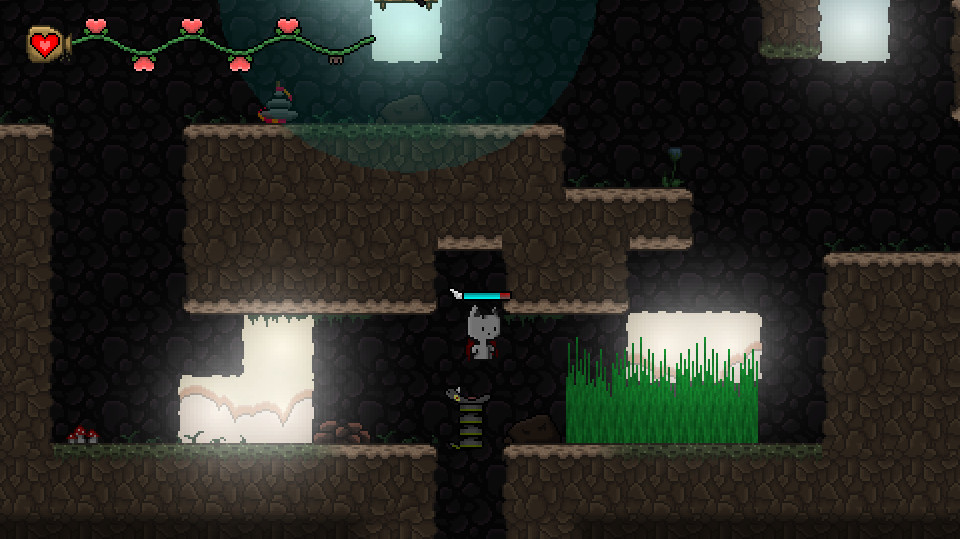 Made by a single developer, Applewood is a 2D puzzle, action platformer that seems to be inspired by the classics of the 8-bit/16-bit era such as Super Mario Bros 3 and Fantastic Dizzy, as well as more contemporary games such as Celeste and Undertale. There is a strong emotional beating heart at its core that is thankfully backed up by an overall great game. It will take you between 5 and 10 hours to complete it, depending whether you’ll focus on the main story only or if you’ll strive to do a complete run by gathering all collectibles and running all the side quests.

The village of Applewood, its nearby forest and all the other places Ringo will visit are all hand-drawn pixels with a lot of details and vibrant colors that make every location and every friend or foe you meet eye-catching and full of character. Similarly, animations are also well done, full of small details such as Ringo anxiously swinging back and forth when he’s standing still, his friend Octopus wriggling his arms when he’s happy, and that same attention goes to the enemies who have their own unique attacking animations, as well as idle animations when they’re enjoying the calmness, that is when you’re not close enough to ruffle their feathers. As you travel the world of Applewood, the starting cheery tones are slowly replaced by darker and foreboding background and quick and dangerous animations from the boss encounters that are as equally well done, and help the immersion when things turn dire as your adventures are nearing the end.

Music is done by 8bitmoon and the developer, and it is a collection of flutes and guitars crossed with 8-bit tracks that go nicely with the action on screen. The music can be delightfully energetic and upbeat when you’re trying to outsmart the mischievous lizards in the forest, or it can be anxious and operatic with somber tones when you’re reaching the darker parts of the game’s journey. Either way, the soundtrack is memorable, especially the final boss theme. The same goes for the sound effects that successfully enrich the game’s atmosphere. 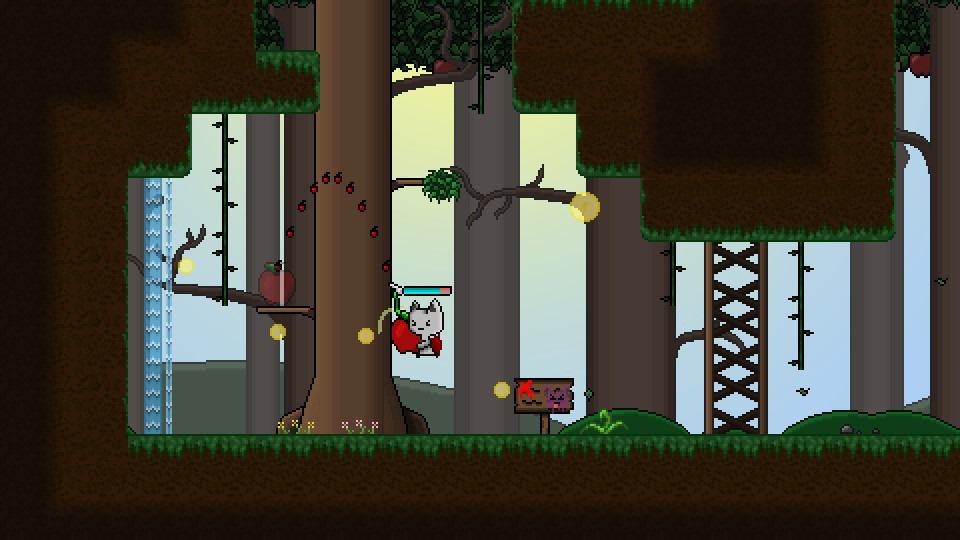 Between a rock and a hard place

At its core, Applewood is a part classical platformer and part puzzle game: there will be a section where you’ll be chasing collectibles and gold berries (that you use to buy health, hats and more) by using quick reflexes and jumping to get to the hard to reach places while simultaneously dodging the enemy projectiles. While you jump, you can glide in the air for a few precious seconds that will save you lives and nerves more than once. You can also hug a wall, and use it to jump between walls and cliffs like a ninja and reach secret parts of the level. Ringo is nimble, but also a surprisingly fragile protagonist, as he cannot attack enemies upfront nor he can jump on them, instead he can use heavy objects around him. Hence, after these action sections, there will be puzzles you’ll have to solve by using heavy objects around you which you can throw by holding on the fire button and setting the object’s flying trajectory. You’ll also deal with your enemies by throwing heavy objects their way, or even capture other enemies and use them as a weapon too. Puzzle sections and action sections are clearly separated in the beginning, but with every new and tougher boss encounter, future levels will mix these sections up, demanding quick thinking and quick reflexes from you. All the levels are designed consistently well, they are challenging enough and last for exactly long as they need to, before a new enemy or a next change of scenery occurs to shake things up. All things considered, the gameplay mechanics are solid, reliable and fun.

On top of all this, the game also keeps a track on your progress, so if you get stuck with the same boss and lose too many times, Applewood will offer you healing soups which you can accept if you wish, and will replenish all your lost heath points once if you’re about to lose. While there are no options to change the difficulty, the game’s difficulty can change if you’re struggling, which will happen especially in the last stages, when the game can be quite brutal and tough. During my playthrough I didn’t experience a single bug, which is quite a rare occurrence today and a nice treat. 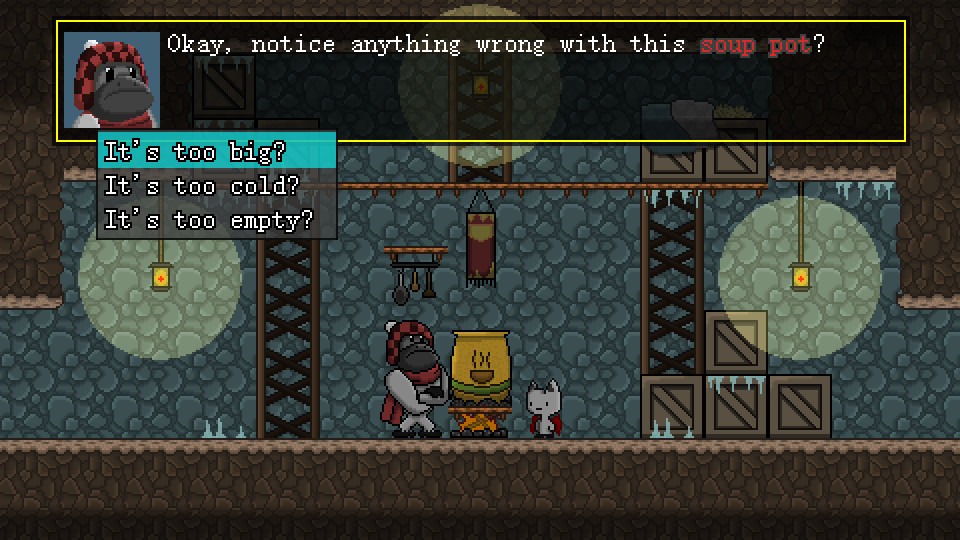 The writing is very good, and while the story is a bit simple, the dialogue with other creatures you stumble upon is emotionally charged and impactful when it needs to be, and it’s also delightfully funny and light-hearted in the moments of calmness or when things get too dire. This aspect of the game surprised me the most, the fact that there is a well-told story with memorable dialogue in a puzzle-platformer game, and left me pondering long after I was done playing the game.

Controls are responsive and simple enough, you can customize them in the options, but playing with the controller is clearly the way Applewood was meant to be played – everything just comes to focus with the controller, though keyboard enthusiasts will play this game just fine, so this is not a minus per se. What is a minus are the saving checkpoints: while game autosaves all your major progress, you can and will manually save at certain checkpoints in the game – when you land on a tree stump. These checkpoints are few and far in-between, and in the latter stages of the game when the difficulty ramps up, you’ll feel this lack of checkpoints when you lose and you’re transported all the way back to the previous level, with 5 – 10 minutes of lost progress. Mind you, this is not a big minus, but it will make you angry from time to time. Other than that, Applewood really has no major minuses and I’ve thoroughly enjoyed my time with it. 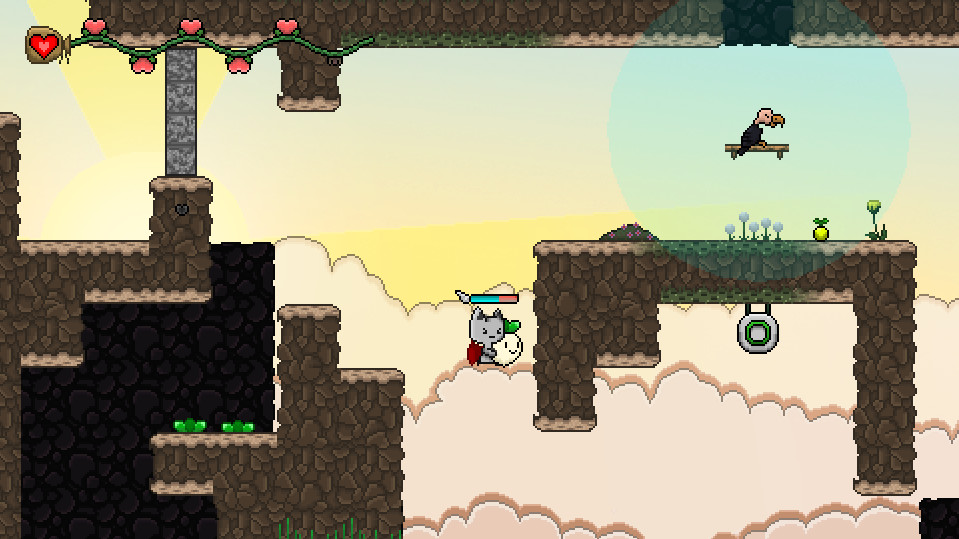 A trip worth taking

Applewood is a superb game and excels in what it tries to do: to provide a fun and memorable puzzle-platformer with a lot of soul and care given by its developer, and I cannot recommend it enough.