Radio Commander is the most unique experience of the year by far. It feels a bit like a mix of “Papers, Please” mixed with an RTS and it works wonders. From the voice acting to the simple art style and the great UI and the stupendously unique and tense gameplay, it’s a great indie game I never expected to work as well as it did. 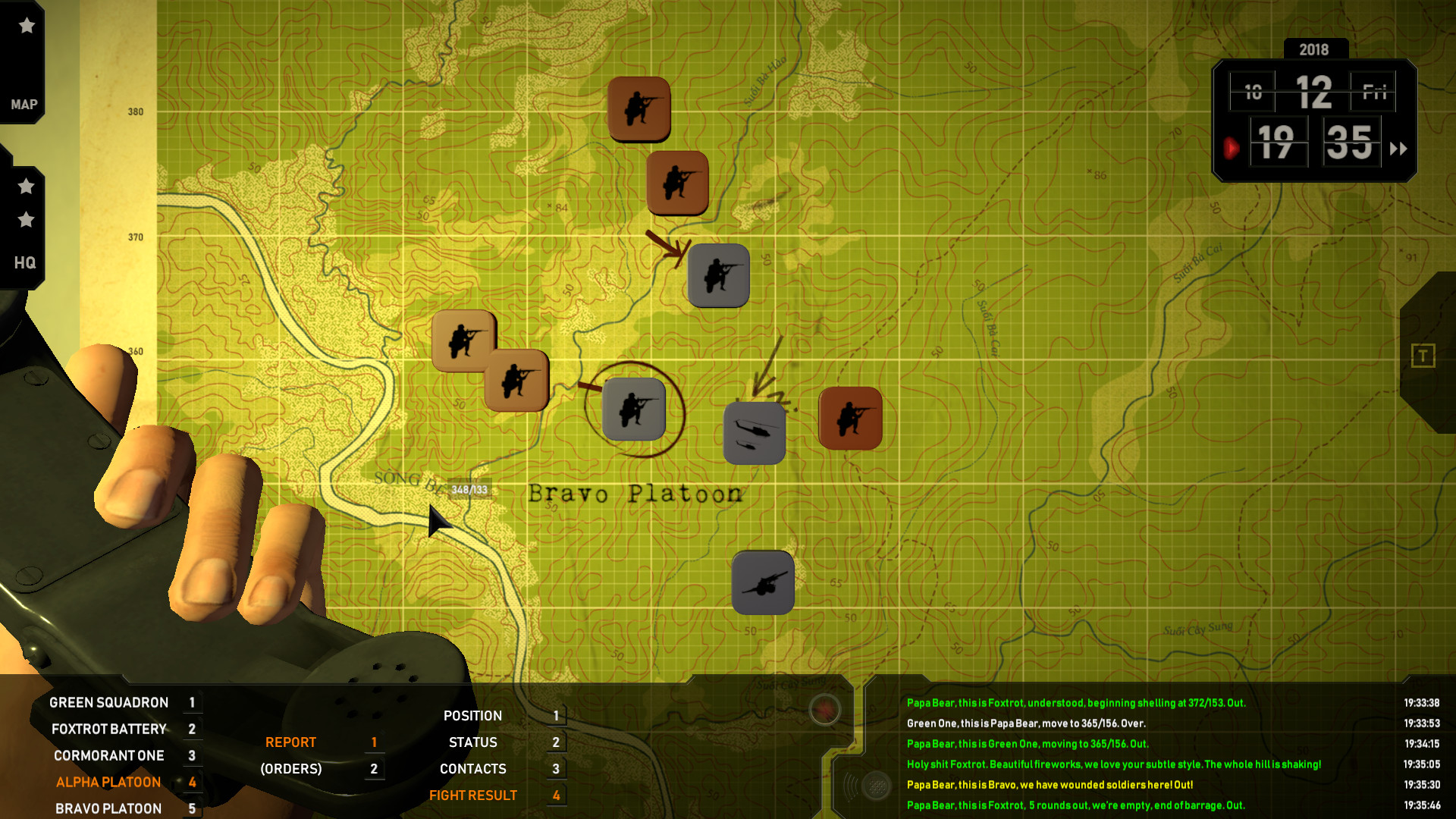 You’re a radio commander – shocking, I know. What you do is stay in the safety of your tent, with the radio on and an overview map of where the action is going down.

That’s it, all interaction is done through the radio (chatting with the squad, asking for reports, sightings, or some occasional chit-chat that is quite well written) and the map, where you have to place little board pieces yourself on the map and tag each as a friendly or an enemy, and move them yourself as you receive reports so you can know what is going on. None of the actual action going down can be observed, it’s all done through audio reports so your decision making and map perception of events needs to be pitch-perfect to ensure the survivability of your squads, whether they are infantry, vehicles, etc.

And that’s it… really.

Don’t this the wrong way, however, the depth of this concept is fantastic and gives this game much more value than you could imagine at first. Troopers have conversations with you and your answers will result in different dialogues and events triggering, adding replayability to the game. Levels can be beaten in different ways and choices come into play as your soldiers report information back and you can either take it mindlessly and carry on or order them to prepare for a possibly nasty surprise…

It’s really great. The developers actually made a game where sound matters for 80% of the game and 20% is just reacting to the information you just heard. The visual stimulation of explosions, gunfire and blood showers isn’t present and it gives the game a unique tone that is very welcome, despite the always-cool-to-see gritty and bloody aspect of Vietnam war being noticeably absent. Nailing this was really hard, even for someone who isn’t a fan of RTS games, but Serious Sim hit it out of the park here.
Despite all this, it’s worth noting that the overall shortness of the campaign and the repetitiveness of the overall gameplay loop paired with really uncommonly slow pacing can hurt players and the game may feel like a good idea only in concept. I did start feeling boredom and oversaturation after some time while I could handle other RTS games far better, so it’s worth noting that it’s not for everyone, not even for massive RTS fans. 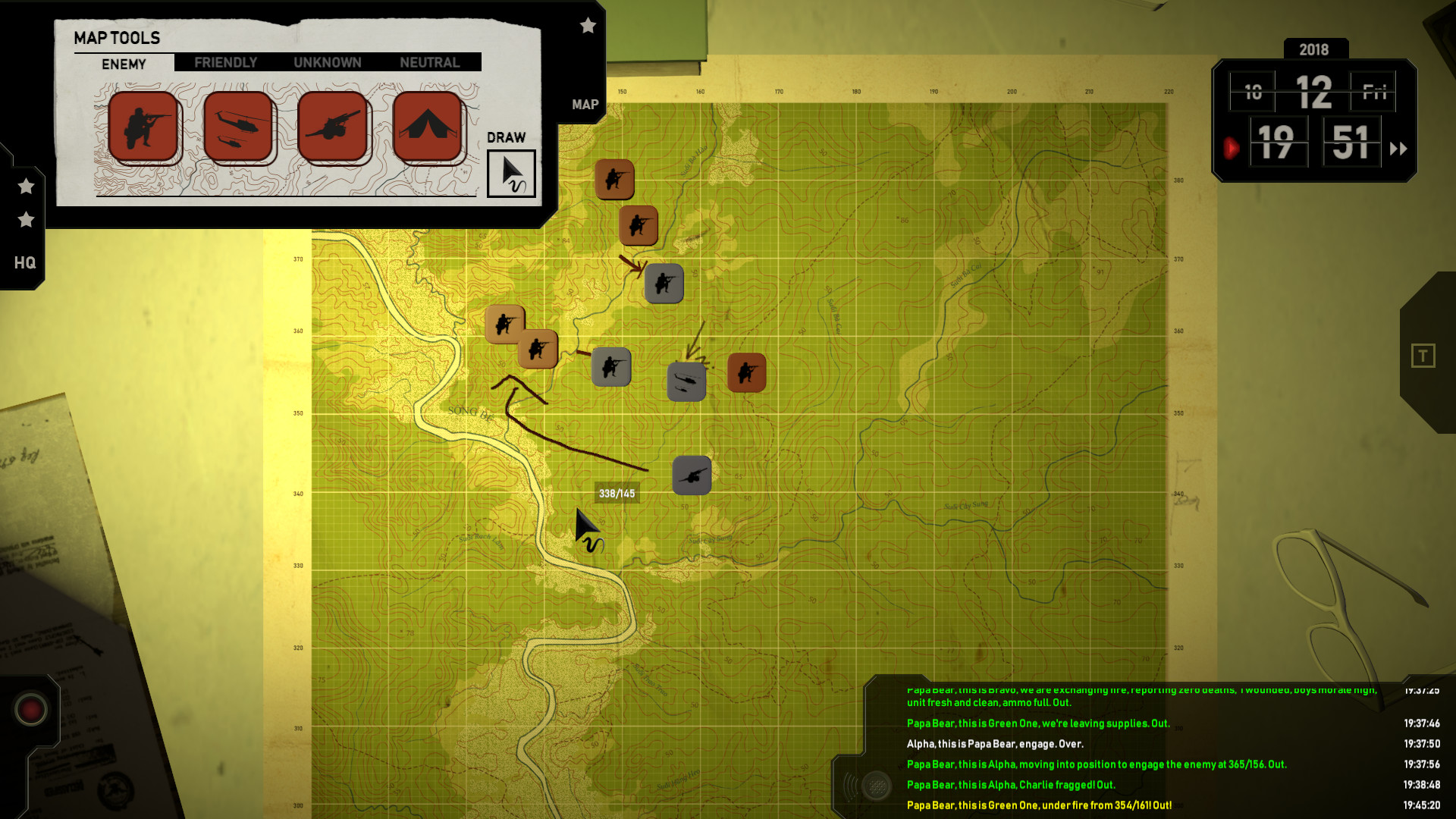 By the end, you’ll have a lot more complicated scenarios that you’ll have to manage further, so using drawings, board pieces and careful planning is a must to ensure a successful mission with acceptable numbers of casualties. If the total of 9 missions sounds small (and the game isn’t that long, to be fair), then you can always play a quick-battle and manage how difficult you want it – infinite enemies paired with all the possible warfare options at your disposal yield a rather messy but fun combat scenario.

The game also has a mission editor with really powerful tools to make YOUR mission possible, but map restrictions and the absence of a tutorial really hurt its usage by more casual players.
Another interesting feature is the fact you can issue voice commands (DISCLOSURE: I have not tried this feature, though.).

I already mentioned how vital the audio is for the gameplay and the player’s choices and reactions, so it’s imperative for the overall audio quality to be great…

From the distinct radio static during squad reports to the great, believable voice acting, the immersion of the game is really stupendous and that’s saying a lot since you do nothing but sit in your tent and look at a map.

The music is also traditional to the Vietnam war era and helps set the gritty warfare mood the game portrays so well.

As for the graphics, they are also good. The art style is simple, with a basic background (although with animations occurring, giving it much needed life and immersion) over the tent you’re in, with a map on a table in front of you. The hand holding a phone as you command soldiers to success… or death. 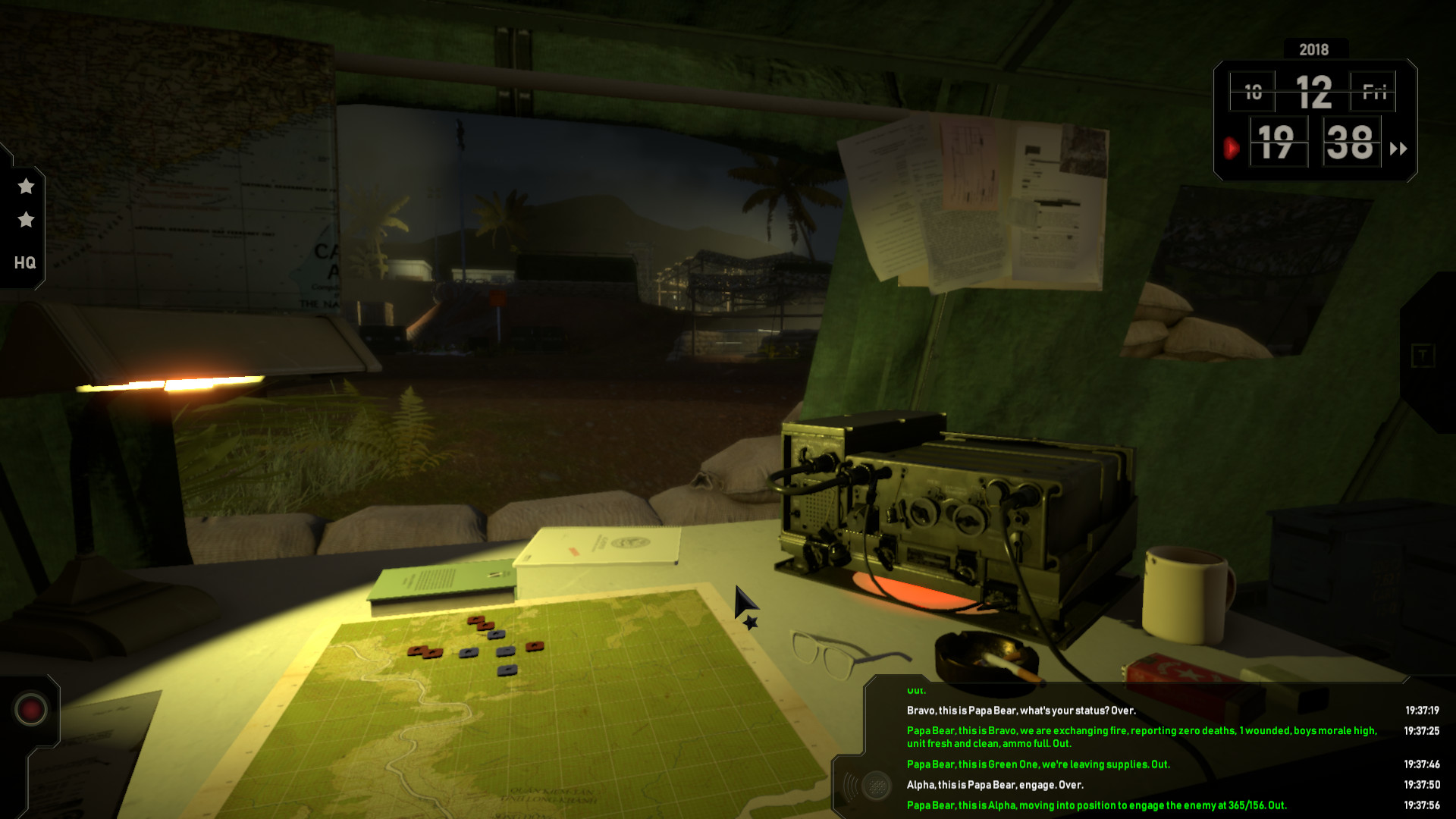 However, since most of the game happens while looking at the map, it’s far more important to have a simple, clear and responsive UI – my God, did they nail it too. You can add board pieces to represent friendly/enemy units on the fly, open the drawing board and the mission log in a very clear manner; nothing clutters the screen too much, which is very important to avoid overwhelming the player and also ensure a great map visibility during the action phase, where the player’s undivided focus is absolutely mandatory.

A weird nitpick but for me the “TIPS” menu has all tips left written mid-sentence with no clear way of finding the rest of the tip (possibly a bug, too), so that’s worth noting.

Radio Commander made a really great and deep game from a seemingly weird and inconceivable concept. Despite the overly slow pace hurting the enjoyment in long sessions, the absence of a proper tutorial for the editor and the noticeably short campaign, Radio Commander is a pretty great game worth checking out, especially in the current 25% off release discount. It is not for everyone but even non-RTS fans can see enough differences in this to give it a shot so do research about it and see if you’d like it. A really unique gem to balance this weak year for gaming so far.