We finally have the two taxi games that were announced at last year’s E3. Night Call was the first to be released a couple months ago and now we finally have Neo Cab. Funnily enough, while Neo Cab was shown first it ended up releasing second. Let’s see how this one fares as we go into the future.

In Neo Cab, you play as Lina right before she arrives at Los Ojos with her few belongings and her trusty cab. While Lina would be more comfortable at Cactus Flats, the need to reconnect with her best friend, Savy, propels her forward. Why doesn’t Lina want to be at Los Ojos? Well, it turns out that it’s home to a tech company called Capra. Years ago, Lina worked with them as a cab driver, but as technology advanced, Capra switched out human drivers for self-driving cars. Not ready to stop driving people around, Lina went to get employed by Neo Cab. Now, Lina is one of the few human drivers left in Los Ojos as Capra tries to push their competition away. 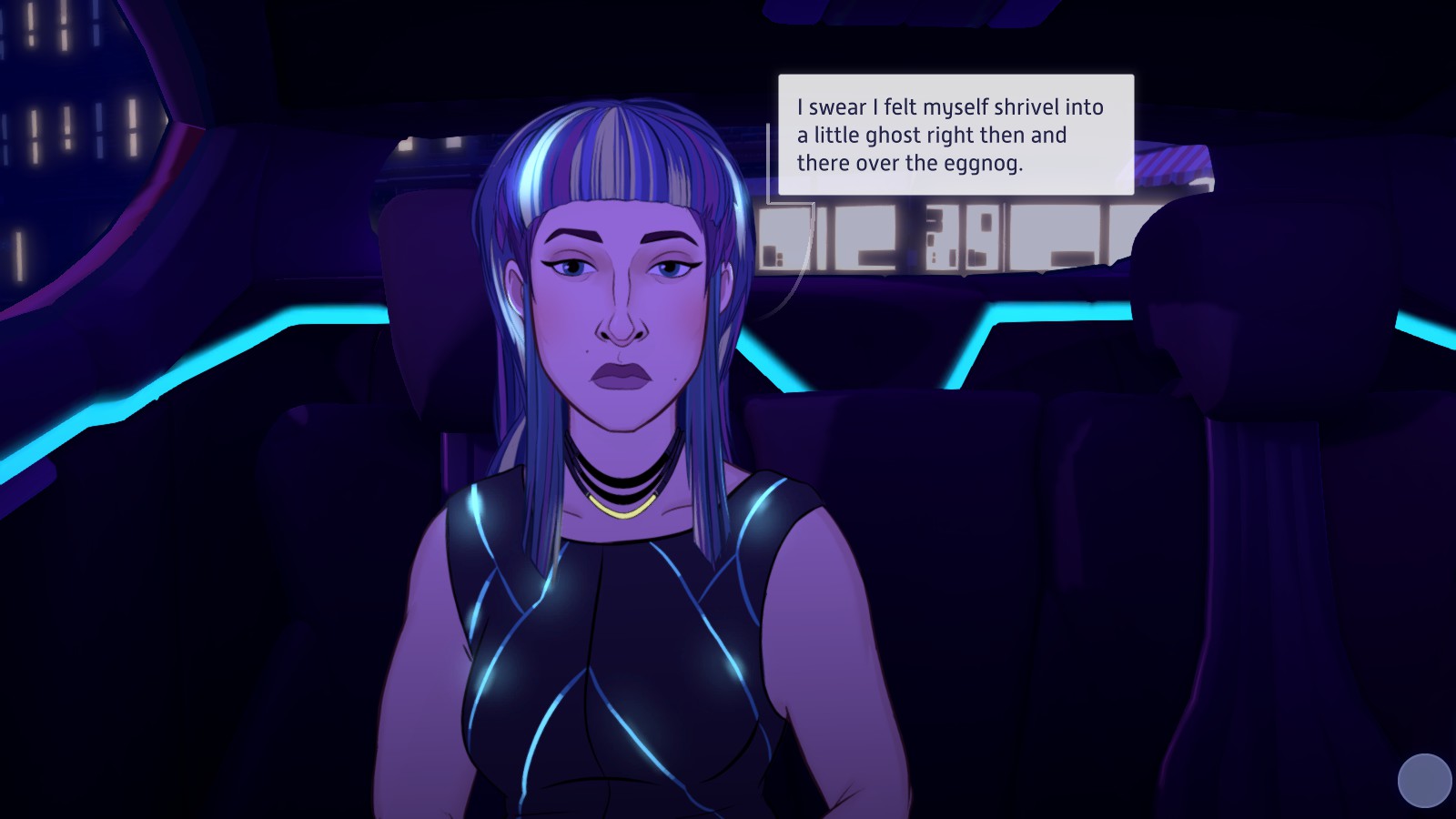 At least she has Savy, right? Shortly after Lina arrive at Los Ojos, she picks up Savy and reconnect a bit. Savy even bought Lina a Feelgrid as a gift, which shows the wearer’s mood via colors (if you know about mood rings it’s basically that, but it analyzes the wearer’s blood). Before Lina could hang out with Savy outside of the car, or even get the address to where she’ll be staying, Savy asks to be dropped off to take care of a little errand. Well, by the end of the night Savy goes missing. As they are best friends, Lina decides to stay in Los Ojos in hopes of finding out what happened. 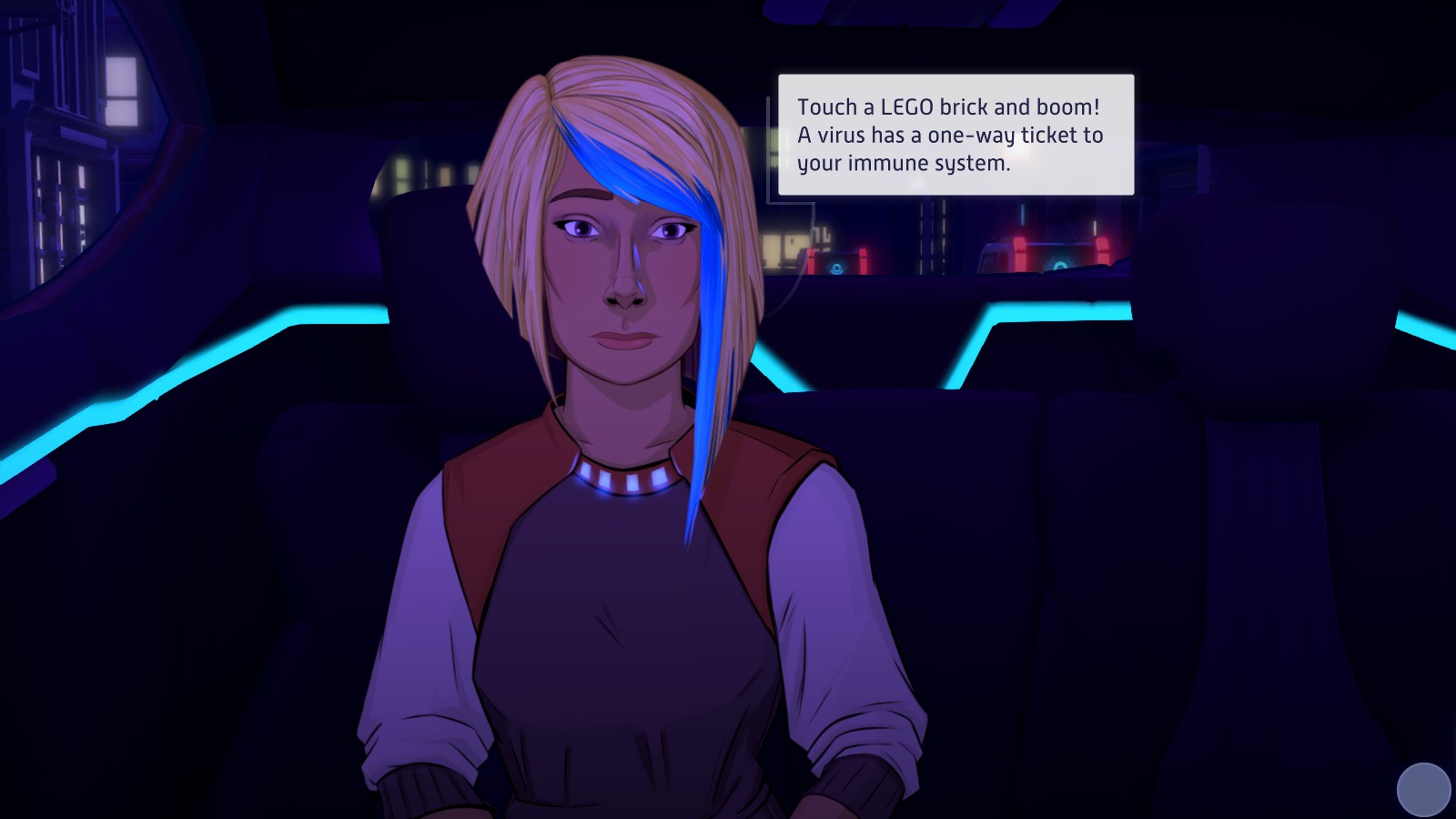 Throughout Neo Cab, you’ll meet some interesting characters. Every night, you’ll be able to choose two pax (or passengers) with the choice of an extra, third, one. What I really liked about Neo Cab was that each pax not only shaped by their past (or present) experiences, but also the politics happening in Los Ojos. As Capra is going forward with self-driving cabs, they’re trying to push Neo Cab off the roads. In fact, this is kind of already in motion as Los Ojos is set to vote for a new bill called Sophie’s Law that will make it illegal for a human to operate a vehicle in Los Ojos. Of course, Lina opposes this bill, but what about the other residents? Sure, you’ll get a pax that’s going to a first date or one that can see multiple timelines, but many others delve into their thoughts around Sophie’s Law. Some agree that humans aren’t reliable enough to not put others in danger, some are for human drivers staying around, and others are just anti-car all together. Even those that don’t outright bring up their stance can be assumed that they’re against outlawing human drivers or at least know that sometimes they need human interaction.

During conversations, the Feelgrid comes into play. As Lina talks with a pax, her emotions will change and we get a handy way to tell where her emotions are at by a grid map. You have feel-good green, happy yellow, angry red, sad blue, and everything in between. The more intense the emotion is, the more it will creep to the edge of the grid, while the more mellow ones are in the center. This affects your dialogue choices as it can open one up and lock some off. If Lina has an extreme blue emotion (and I’m assuming red), Lina won’t be up to doing an extra ride. This mechanic has me conflicted as the implementation and how some characters react to Lina having a Feelgrid is interesting, but at the same time, it can get annoying as the option you want is blocked. It can even be frustrating if it’s a forced emotion shift to push you forward story-wise (especially when going against what the game wants could have been interesting) and points out how your choices don’t really matter that much. Especially when going against what the game wants could have been interesting. Perhaps it would have been better if some options had variations or you could fail to hide how you felt in your voice in certain situations. 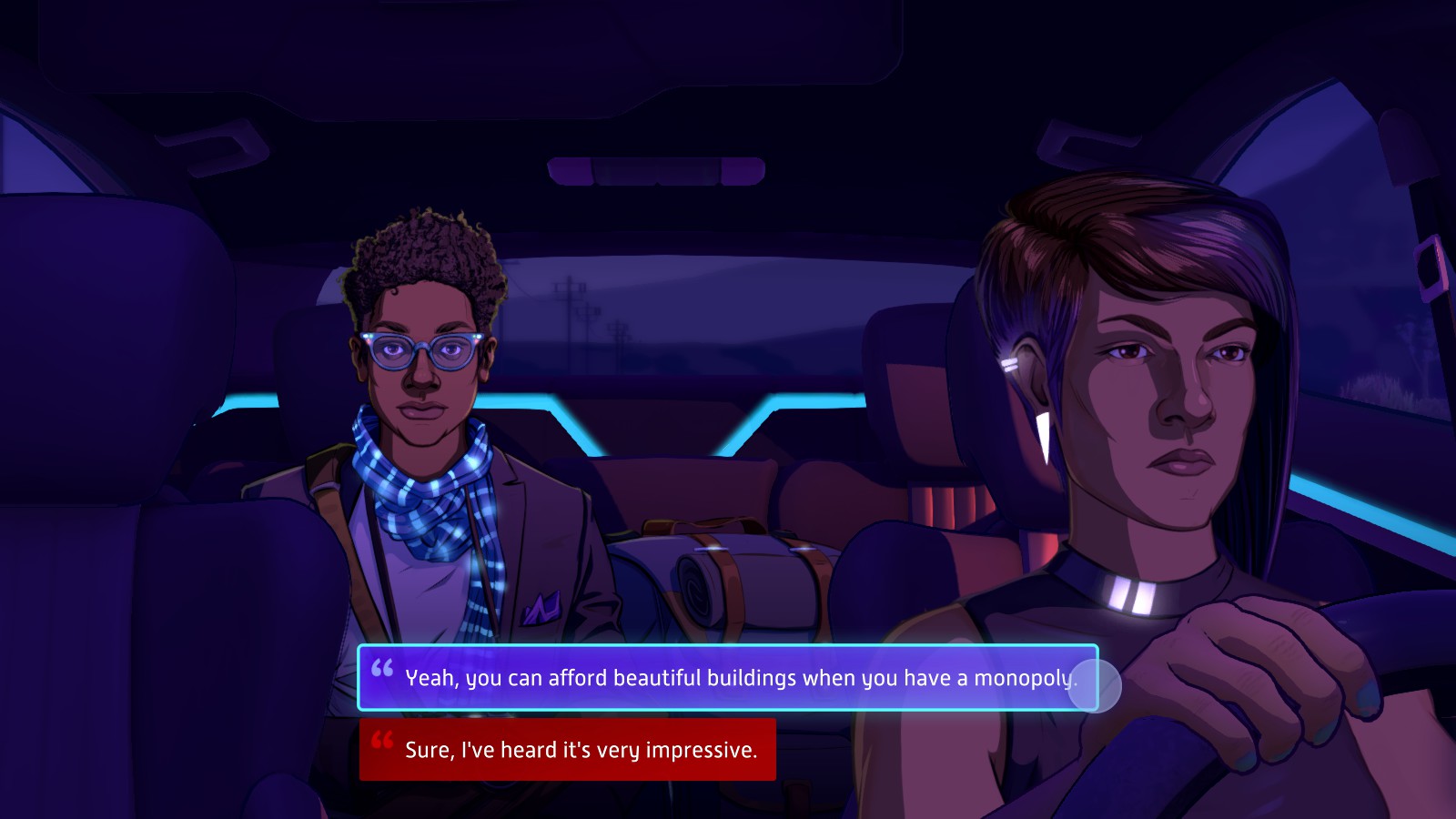 This also puts focus on how choices don’t really matter, which will be a huge negative for those who were looking forward to Neo Cab for that reason. The most notable one is early on when a pax named Azul jumps into Lina’s car (without going through the app mind you) and telling Lina to drive. Lina is understandably angry, but you’re railroaded into telling them to get out and then calming down and giving Azul a ride after looking into their eyes. You can’t have Lina agree or be understanding while Lina is angry and you can’t refuse Azul. Being able to refuse Azul would have given you a consequence as she has the information you need whether you not she’ll actually tell you. However, as of now, there’s a bug. After gaining information about two things, Azul will tell you to come back tomorrow. Well, when you visit Azul again it skips and says to come back tomorrow. Also, late-game you’re asked to pick up someone that you haven’t met yet. On my first playthrough, I didn’t know you could visit Azul to gain information about their appearance so Lina didn’t know what they looked like. However, on another playthrough when I did learn beforehand, it was the same result. 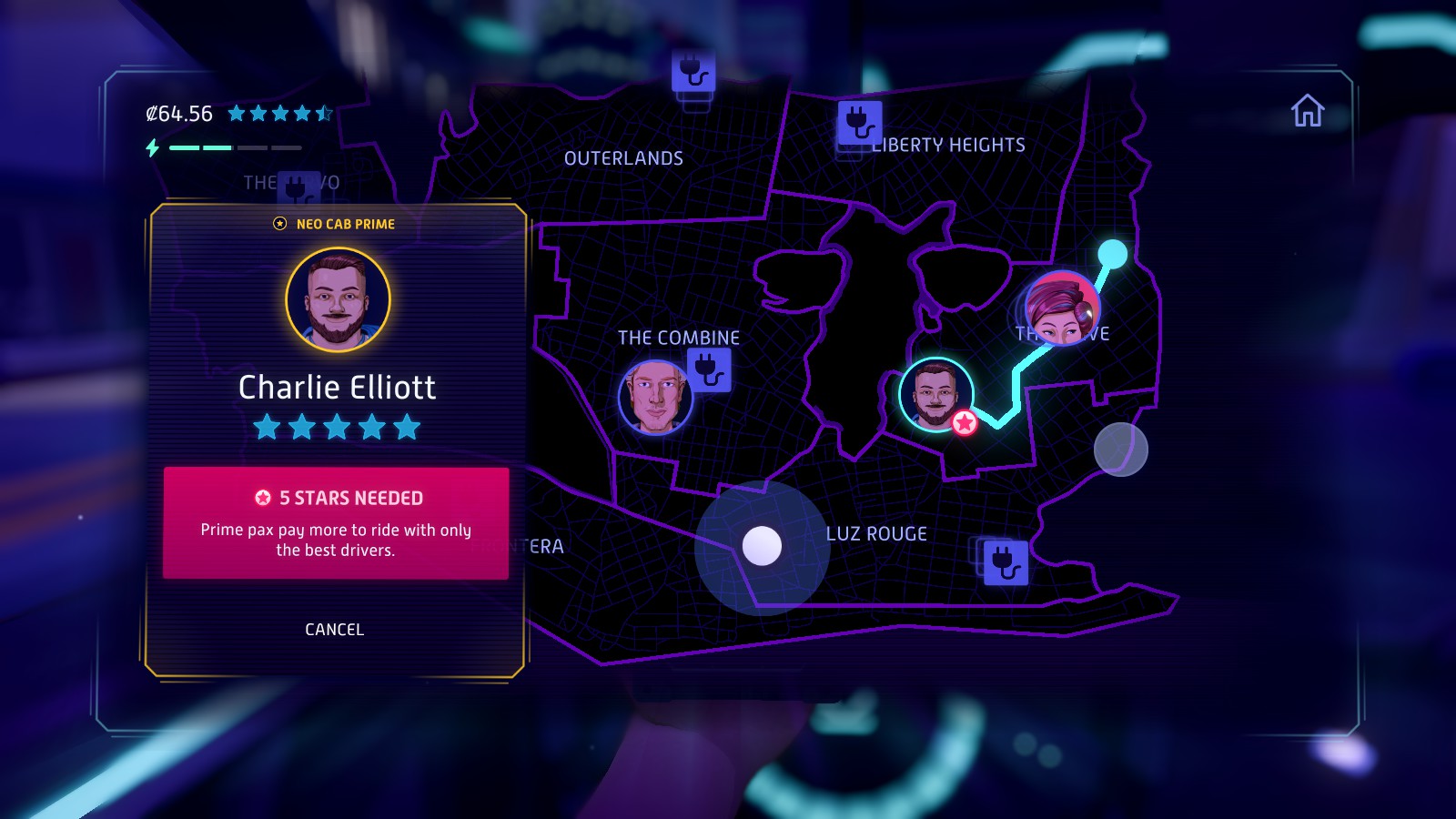 In Neo Cab, you have two things you have to keep track of: money and your rating. While your car doesn’t need gas, it does need to be charged every once and a while. You’ll never run out of charge in the middle of driving your pax to their destination (though that would be funny), but if you don’t have enough charge you won’t be able to pick someone up or go to a location. Many Charge Stations are sprinkled around Los Ojos and while you can just wait till you’re so low that you can only make it to the Charge Station, each one has a different price per bar. One station will charge less than a dollar per bar, while one will charge $1.32 per bar. In addition, since you never got info about where you were going to stay with Savy, you’re going to have to pay for a hotel. Honestly, you won’t really be low on money unless you get a ticket. Meanwhile, your rating is based on your most recent rides and to stay employed with Neo Cab, you have to maintain a four-star rating. This means that if you get one pax in a bad mood, it’s going to tank your rating. Thankfully, you do get warnings before you’re fired. In addition, some pax are premium members that can only be picked up if you have five stars.

If you’re planning to get the fail conditions, you’re in for a surprise. It’s easy to assume that if you run out of money or get fired, it’s an early end. Well, it turns out that running out of money will have Lina sleeping in her car (her mood will suffer) and have Lina go against her ethics as she turns to Capra to earn some extra money. Having a low rating is the only fail condition, but it’s considerably hard as it requires you to know which pax will give you low ratings and keep the low rating for a long time. 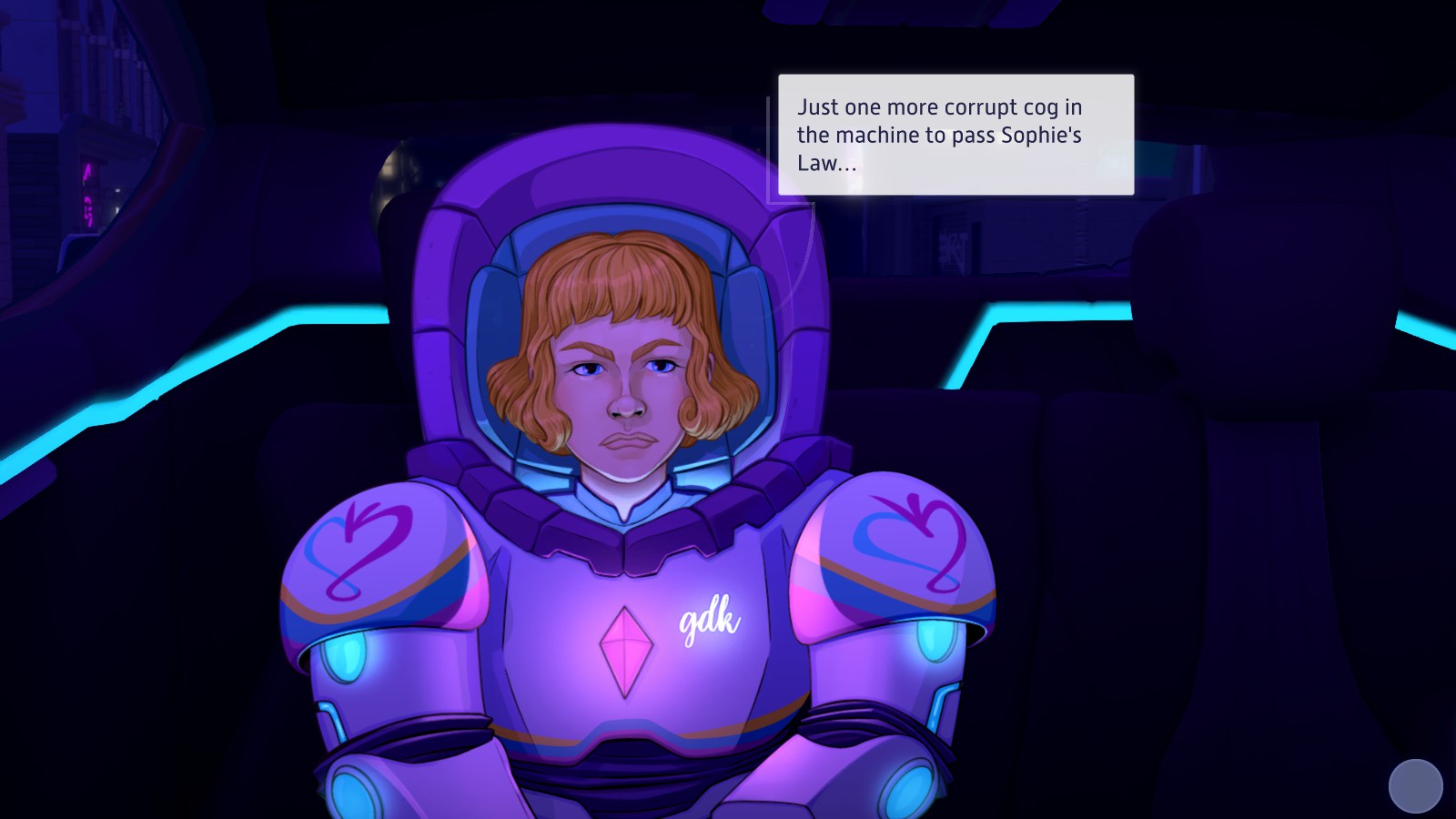 While I did enjoy Neo Cab‘s characters and how the personal the politics of phasing out human drivers for self-driving cars (as well as Capra sneakily gathering information on customers and doing PR stunts) was, it also has aspects that will turn some players away. If you’re someone that hates when a game acts like choices matter, the railroading and the Feelgrid mechanic is going to leave a bad taste. If Neo Cab still interests you and you don’t really mind the downsides, the story is a couple hours long with four possible endings (if you count the fail ending). There is replayability as you won’t be able to pick up every pax in your first playthrough, but you’ll have to go through Savy’s sections again.