I’m not very good at taking care of things. So Biotope, the new Early Access aquarium simulator, with its unkillable digital fishies, immediately caught my eye. Not only as a way to make up for my poor pet-keeping skills, but also as a way to relax and zone out to a rippling, bubbling, glowing and swaying undersea vista.

The game itself, though different from what I had imagined, offers a unique chance to dive into the complex world of fishkeeping, without the risk of flooding your living room. 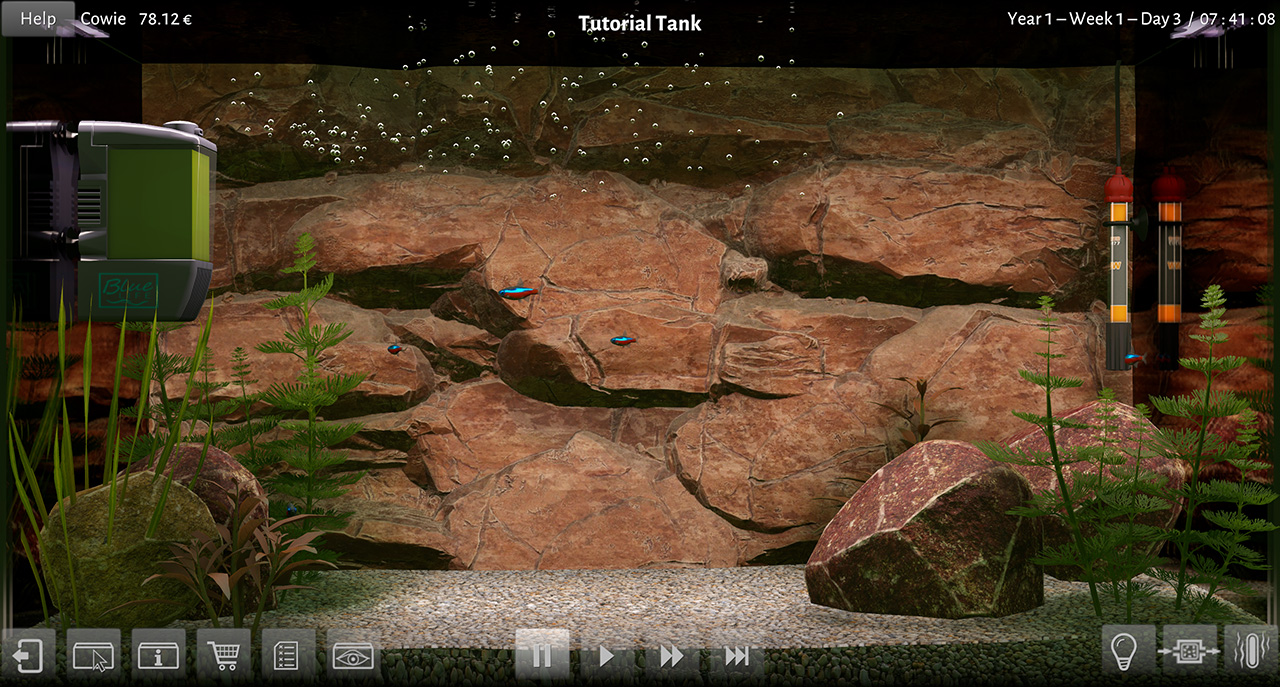 Biotope has a lofty goal: to simulate a living fish tank as realistically and accurately as possible. You can purchase fish (or attempt to breed your own) install and maintain equipment such as filters and heaters, and add decorative elements like rocks and even a sunken treasure or two.

Based on the type of fish and plants in your tank, you’ll need to maintain a constant balance in things like pH levels, oxygen, ammonia nitrogen, nutrients, etc. Once everything is in place, you can hit the “play” button and your virtual fish will go about living their virtual lives in the virtual ecosystem you have created. It’s like having a real fish tank, but less moist.

As the game is still in Early Access there aren’t many scenarios to begin with, a tutorial level and two pre-made setups, but you can also choose to start from scratch and build your own tank. Either way, based on the type of fish you have chosen, the goal is to maintain the environmental conditions that they need to stay happy, as shown by numerous stress graphs at your disposal. Buy and maintain the equipment needed to keep equilibrium in your watery little biosphere, tweaking settings such as nozzle flow and temperature, based on the needs of your plants and animals. Plantlife is a very important part of the ecosystem, too, because it serves not only to beautify your setup, but provide shelter for your fish, and more importantly, contribute to the carbon dioxide/oxygen exchange that is needed to keep everything in balance. You can also add decorations to your tank, but be careful, certain types of rocks and wood will affect the mineral content of the water, which could lead to unintended consequences. 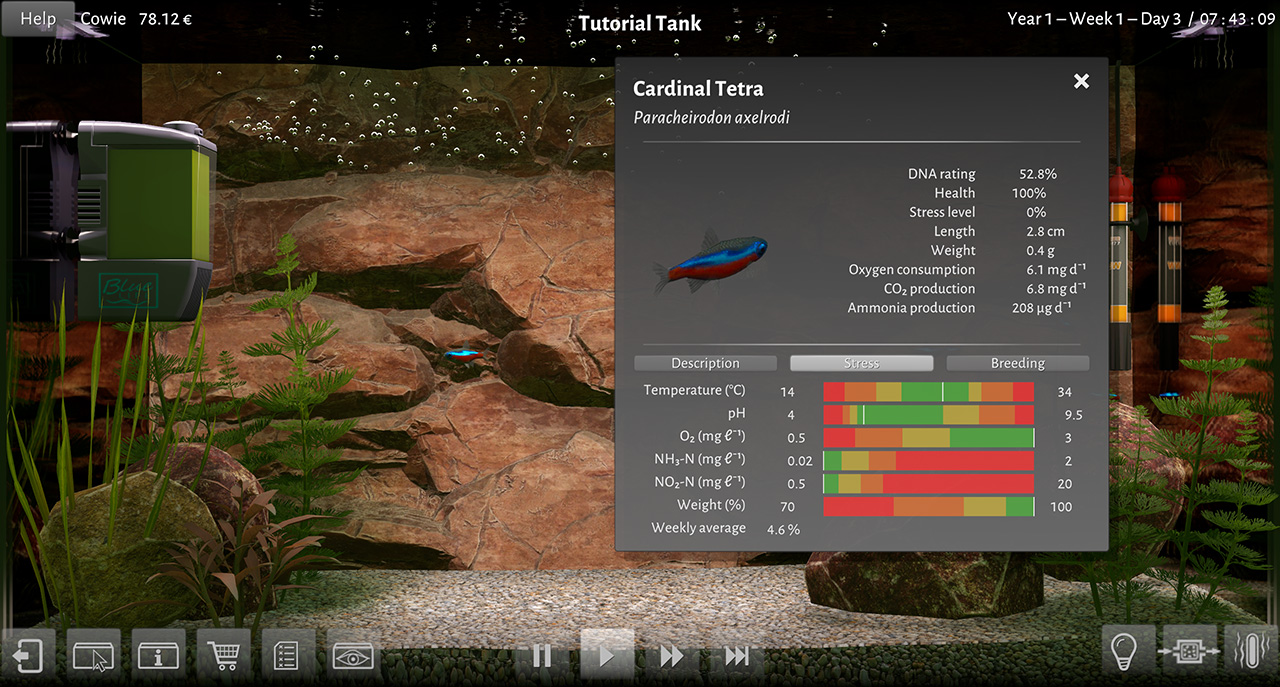 The simulation runs in real-time, which is interesting in and of itself, as in theory you could leave it running 24/7 and it would behave like an actual fish tank. Thankfully, there are time controls to speed things up so you can simulate long stretches of time without having to wait. Regardless, you will need to continually monitor the conditions of the tank, making sure the chemistry, gas exchange, temperature and nutrient levels are sufficient for all the life forms (plant and animal) in your tank, and that everyone is playing along nicely.

You can use the game’s many stat screens to check on any of these conditions, and then make changes where needed by using your inventory to tweak the balance, adding things such as ammonium chloride for plants, or sodium bisulfate as an acidity regulator. Equipment such as air filters, lights and heaters can be adjusted to reach the target comfort zone for your tank and may need constant updates as your inhabitants grow and multiply. 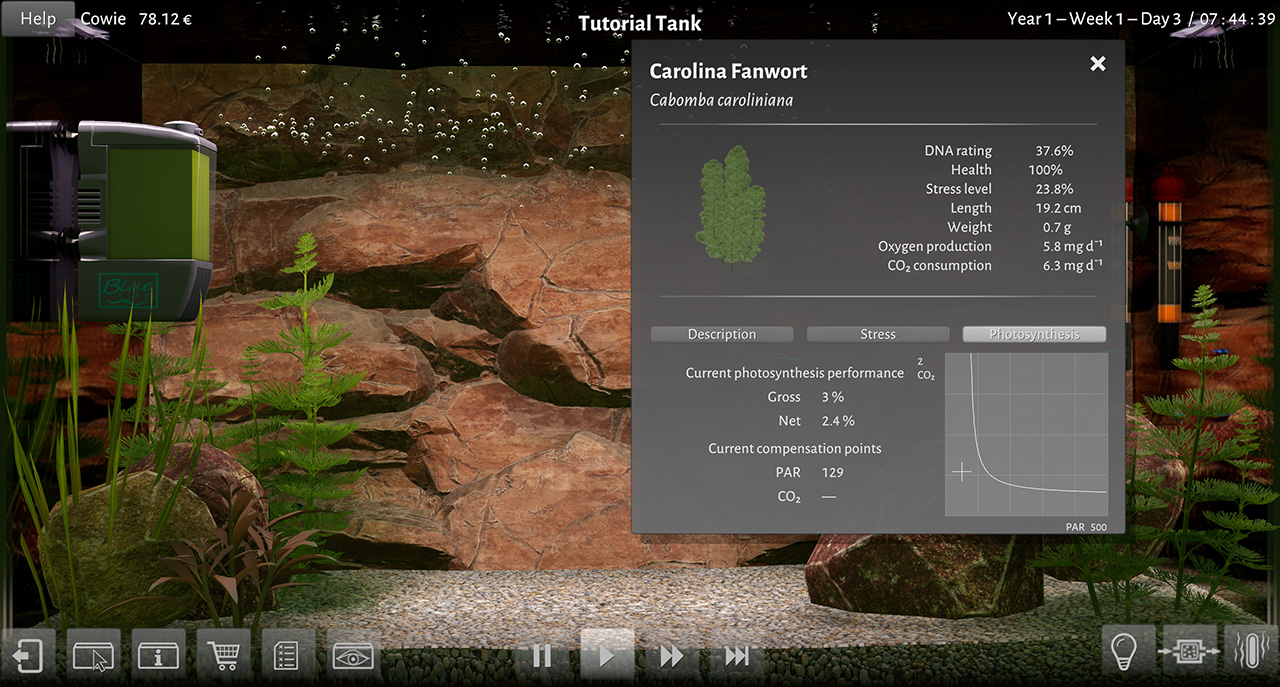 There’s a shop you can visit to procure supplies, decorations, and new fish, with the money you earn from a weekly allowance and from completing quests, or by becoming a breeder. The game gives you simple tasks you can tackle, such as keeping a specific breed of fish happy (stress-free) for a fixed number of days, and successfully completing each task gives you experience points along with cash. The goal here is to level-up your aquarist skills, thus unlocking new (and fancier) equipment, bigger tanks, and more opportunities. In this way, the developers have added a layer of challenge to an otherwise passive experience. The tasks are not necessary, of course, so if you’d rather just use Biotope as a virtual aquarium living inside your monitor, you can; but the point it is, there’s more to do if you choose. None of the quests are overwhelming, though at present there aren’t many of them, and they have occasional bugs that may get in the way, but such is to be expected in Early Access.

The graphics are a respectable simulacrum of what I imagine owning a real fish tank would be like, and are suitably hypnotizing. The fish look like their real-life aquatic counterparts, as do the plants, rocks and various tank equipment; the water has a pleasant ripple effect and even casts pseudo-caustic reflections on the gravel below, a nice touch that pairs well with the bubble sound effects of the pump and the hum of the faux-electric lamp. The overall effect of sight and sound does a good enough job of mimicking its theme so as to convey a sense of calm and relaxation, which makes tending to your virtual tank a meditative act.

Graphically there are only a few tiny issues. The tank and all of its equipment look true to life, but also a bit too perfect, and hence a bit cold and sterile. There is no stylization in this game, it’s aiming to be real after all, but there’s also no signs of life…everything is perfectly clean, precise, spotless, seamless, robotic, and uniform; there’s no variation, or randomness to break up the repetition and simplicity of the objects, or to add a sense of visual flair to the scene. Also, the animations of the fish are a bit stiff presently. Hopefully, that will change as the game develops. 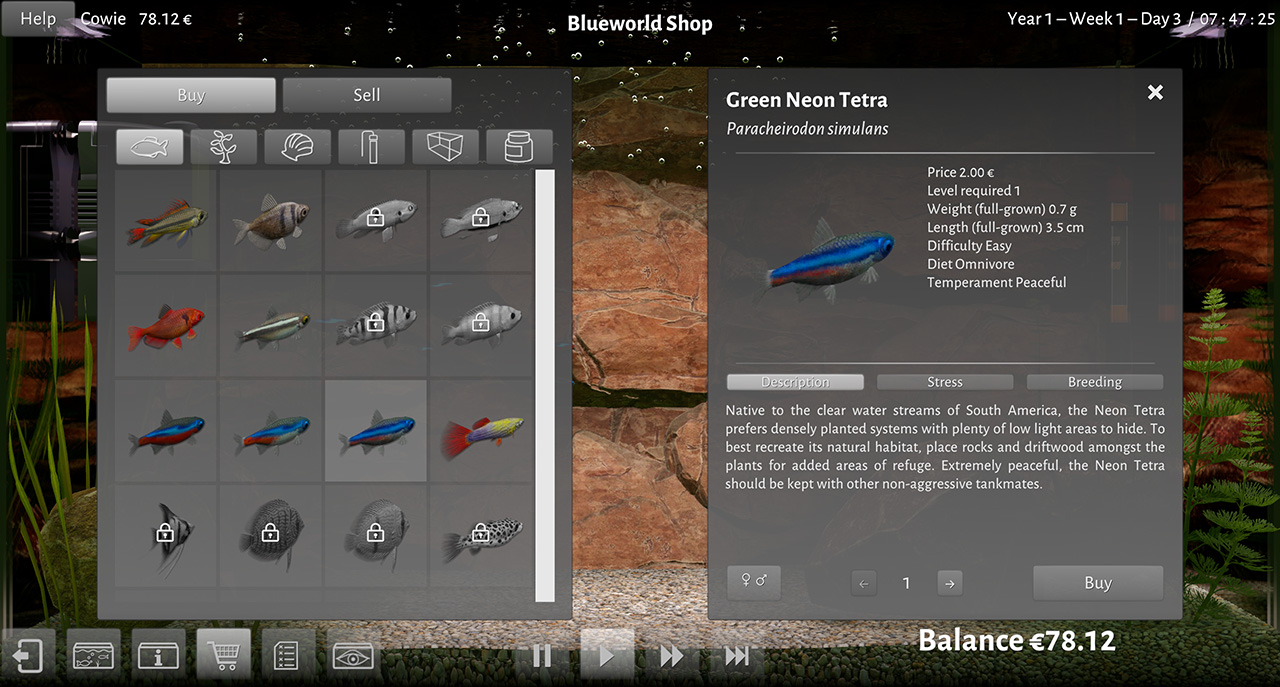 There are a few other minor visual limitations that are disappointing, but not a deal-breaker. I wish, for example, that you could set the main view of your tank to custom angles, but when the sim is running you’re stuck in a front view. To be fair, when you’re placing objects or editing the tank you can move around more freely, but the rest of the time the camera is locked. Also, the collision detection of the plants isn’t perfect, so it’s a frequent occurrence to have various plant life physically jutting out through the glass all around your tank; hopefully a clipping system can be added, as it does ruin the effect to see tape-grass poking through your tank.

As far as issues, it’s painfully clear Biotope is still in Early Access…one might even argue it’s a bit too early. A lot of the dev’s planned features haven’t been implemented yet, there aren’t many tanks or items to choose from, the number of breeds available is incomplete, the animations feel unfinished, and the UI is a fugly disaster. However, the core mechanics are working, and the simulation itself seems to be fully functional. To my novice understanding, at least, the complex balance of chemistry, biology and physics are all integrated seamlessly to accurately recreate a watery cycle of life.

There are a number of user-experience features that are missing or poorly implemented, and the hope is that the game will continue to mature as it progresses. As mentioned, the interface is bad; it feels like a placeholder at the moment. It takes too many clicks to get the information you need, and when you do find it, the labels aren’t as clear as they could be (especially in the graph screens). Likewise, the HUD could be better organized to show you key data more prominently, so you’re not having to constantly dive through screens to find critical information, such as stress levels of a particular fish you’re trying to monitor.

Which opens up another gripe: selecting things. You constantly need to select plants and fish to check their stats, or perform actions with them, but the entire selection process is inaccurate. Double-clicking on an object will, in theory, bring up a stat window; but, in practice, the double-clicking rarely works, necessitating multiple attempts to get the info you need. This click-fest extends to editing the tank, as dragging objects around to reposition them is equally fickle. With a lack of hotkeys in the game, you’ll need to rely on the mouse for everything, so it’s a shame it’s as unresponsive as it is. 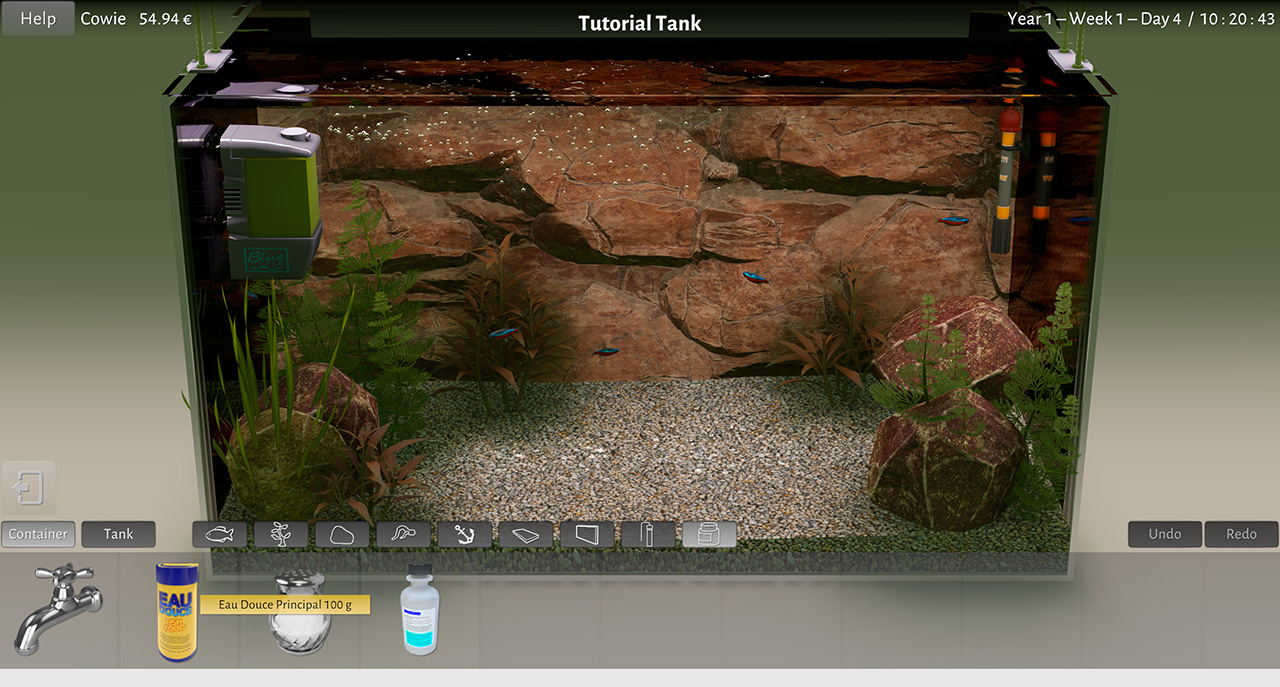 The biggest complaint I have, though, is actually a compliment in disguise. Biotope is almost too realistic. I’m coming into this game with absolutely zero knowledge of fish or aquariums, and in that regard, I am incredibly out of my depth here. In my naivete, I thought “how hard could it be to keep tropical fish?”, and assumed the game would either simplify things to make it more game-like or would hold my hand with lots of easy to use tutorials. However, it turns out that Biotope was created by people who already intimately know and understand this stuff, and expect you, the player, to as well. Apparently keeping tropical fish is complicated, and this is accurately reflected in the game.

Although there is a brief and tiny tutorial in the beginning, it just walks you through editing a tank, not really the core principles of fish-keeping. So if your fish are dying, it’s up to you to figure out why, and this involves understanding things like gas exchange, water hardness, chemical composition, the interplay of water movement with oxygen and carbon dioxide, how plants feed off of and also contribute to the tank’s environment, the biological needs of each breed of fish, and so on. The game offers you little guidance here, so my time in Biotope was matched with an equal amount of time doing basic research online about this stuff. Granted, it’s not rocket science so it’s not overly burdensome, but the point is, if, like me, you’re going into Biotope with no background knowledge, don’t expect the game to be a source of wisdom; you’re on your own. 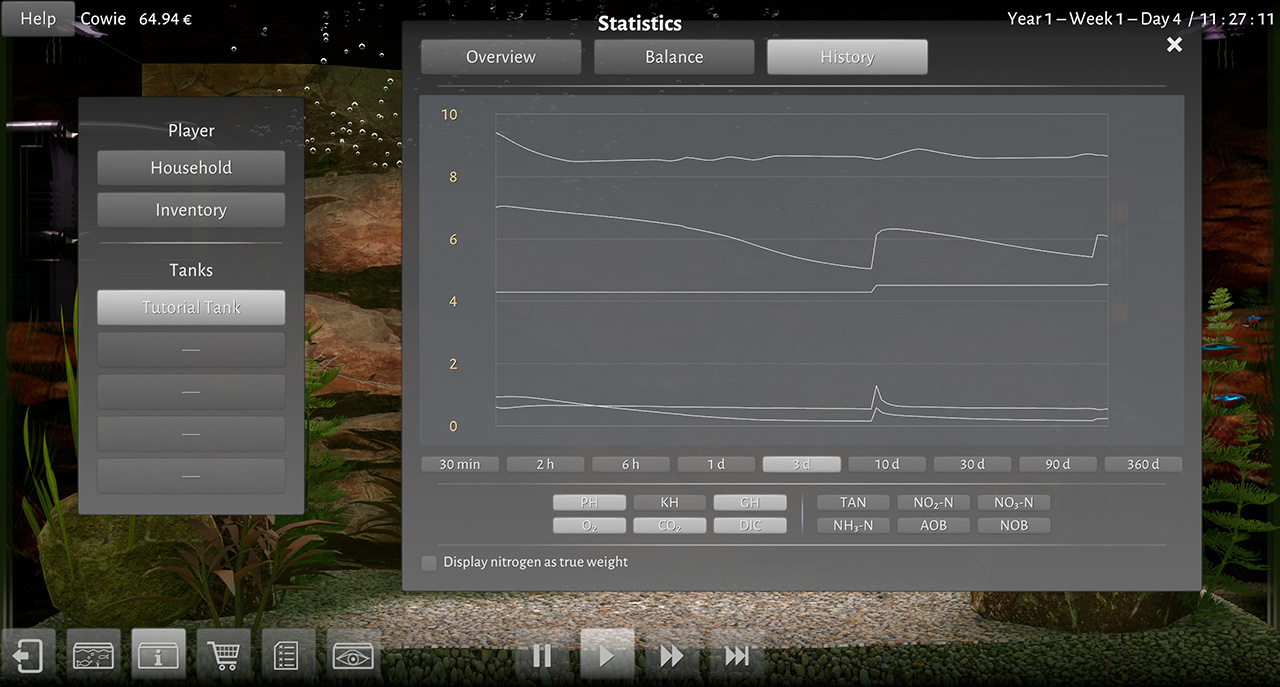 Still, the fact that Biotope exists at all is quite impressive. It’s easy to dismiss it as a fresh-water Tamagotchi, but it turns out that the game does a very good job of simulating and scientifically mimicking (more or less) the entire complex ecosystem of a living world in miniature. At present the game is unfinished; features and items are missing, tasks are incomplete, there’s not much to do, and there are usability issues. However, all of these things seem fixable as the game continues to mature, because, at its core, the mechanics of fish-keeping are alive and well.

Admittedly I went into Biotope not quite knowing what to expect. Perhaps I was hoping for an aquarist version of Viridi, something passive and relaxing. Though the game has proven to be more complex and involved than that, it is no less meditative. Provided MBL Development continues augmenting and refining the formula, Biotope is worth fishing for when it swims passed Early Access.